When many people think of traditional Canadian food, poutine and maple syrup come to mind. Canada, however, is a vast country with 10 provinces and three territories. Each has an iconic food or dish to try that tells about the culture, history, and resources of the region. Some draw from First Nations diets, while others are from colonial and other immigrant backgrounds. All are worth a taste in your travels. These are the iconic foods and dishes to try in each of Canada’s provinces and territories. 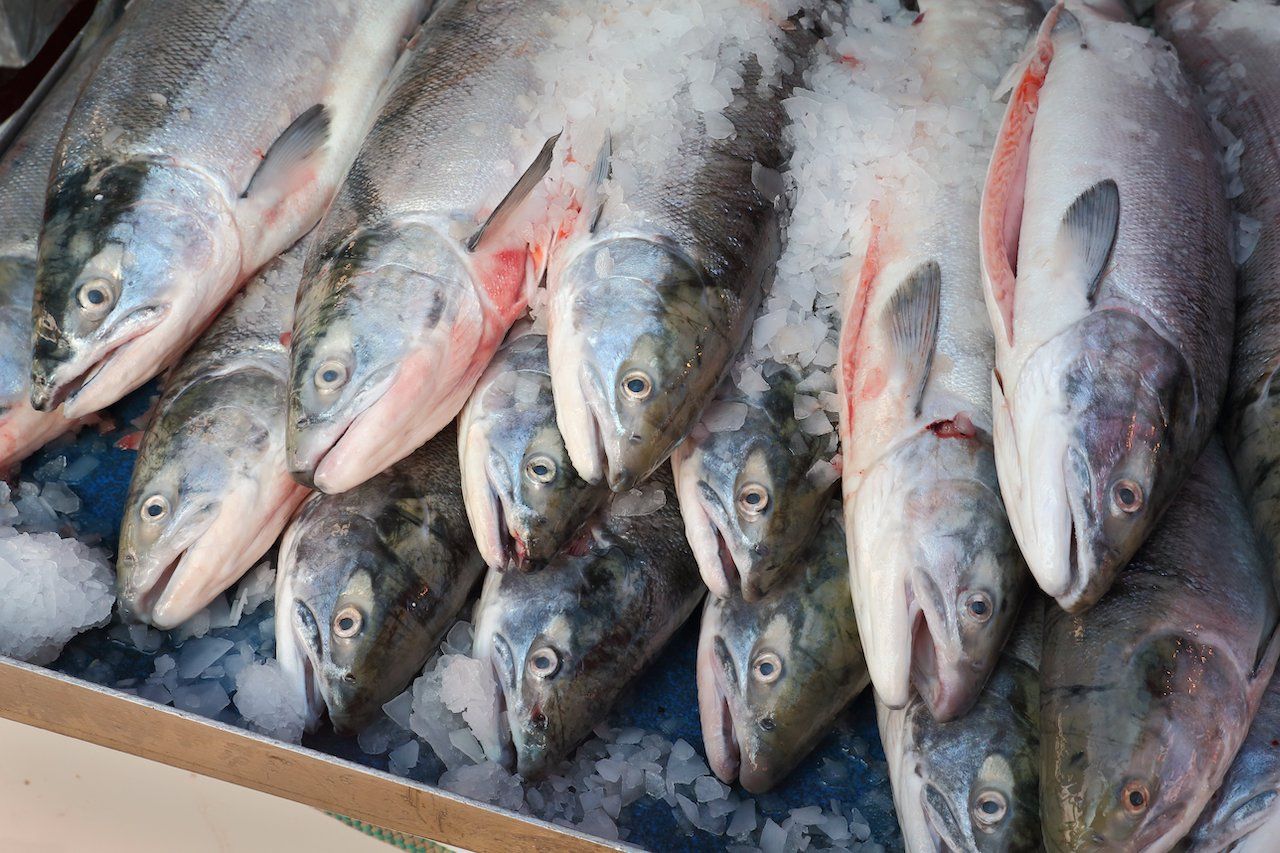 The waters around British Columbia run with wild salmon. Pacific salmon have played a central role in many First Nations cultures, and today, the BC wild salmon industry is worth somewhere between $150 and $250 million, according to the advocacy group BC Salmon.

When trying salmon in BC, search for salmon that was sustainably harvested — there’s a huge market for wild caught Pacific salmon, but the Pacific coast is also home to many salmon fisheries that can spread diseases or pollute native fisheries. To keep your salmon consumption sustainable, look for the Ocean Wise symbol on restaurant menus.

British Columbians are proud of this natural resource, and you’ll find salmon products like salmon smoked or candied with maple syrup just about everywhere. If you love brunch, BC eggs Benedict (smoked salmon replaces the typical bacon or ham) is a must-try. Salmon has also made its mark on the the very prolific sushi scene in Vancouver, where you can find rolls made with crispy salmon skin. 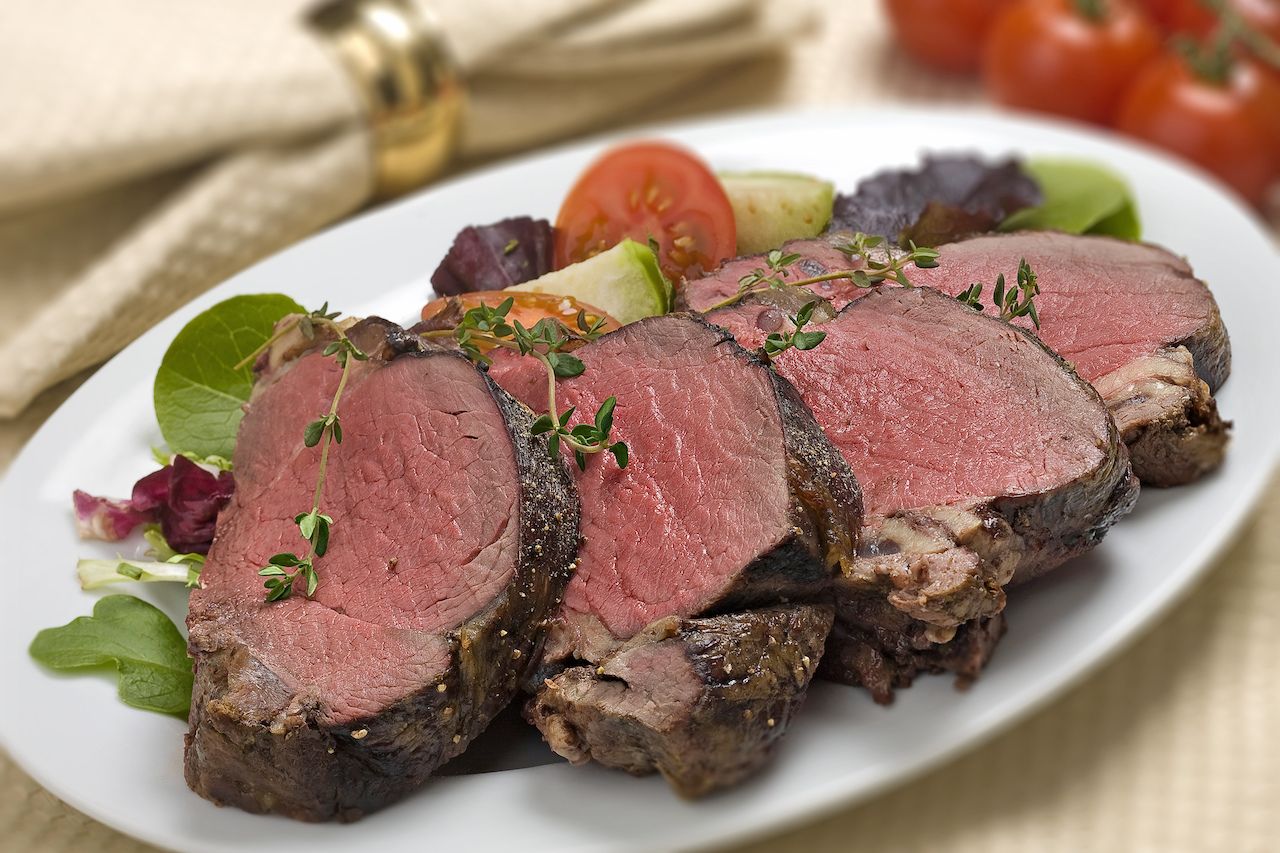 There’s no animal more iconic to the Great Plains than the thousands of bison that once roamed the grasslands. Bison were an essential part of local indigenous life and diet. The meat was cooked over the fire, salt preserved, and put into soups. An early type of protein bar called a pemmican, made with dried meat, buffalo fat, and berries, sustained people on long journeys and through the winter.

Excessive hunting by European settlers decimated bison populations in the 19th century. Thanks to conservation efforts, however, the bison have made a comeback, and many farms in Alberta specially breed and raise bison. It tastes similar to beef but leaner and more gamey, and today you can find it in burgers, chili, and roasts on menus across Alberta.

Flapper pie is an old-timey, light, and decadent pie with a graham cracker crust and a layer of vanilla custard that comes topped with a thick layer of fluffy meringue. While no one knows exactly where the first flapper pies were made, it’s believed to have popped up in the early 1900s with the invention and spread of the graham cracker. During that time, Nabisco sold graham crackers with a pie recipe that was similar to today’s flapper pie. What is known is that the flapper pie in its current name and form (vanilla custard is key) is a beloved Manitoba favorite. 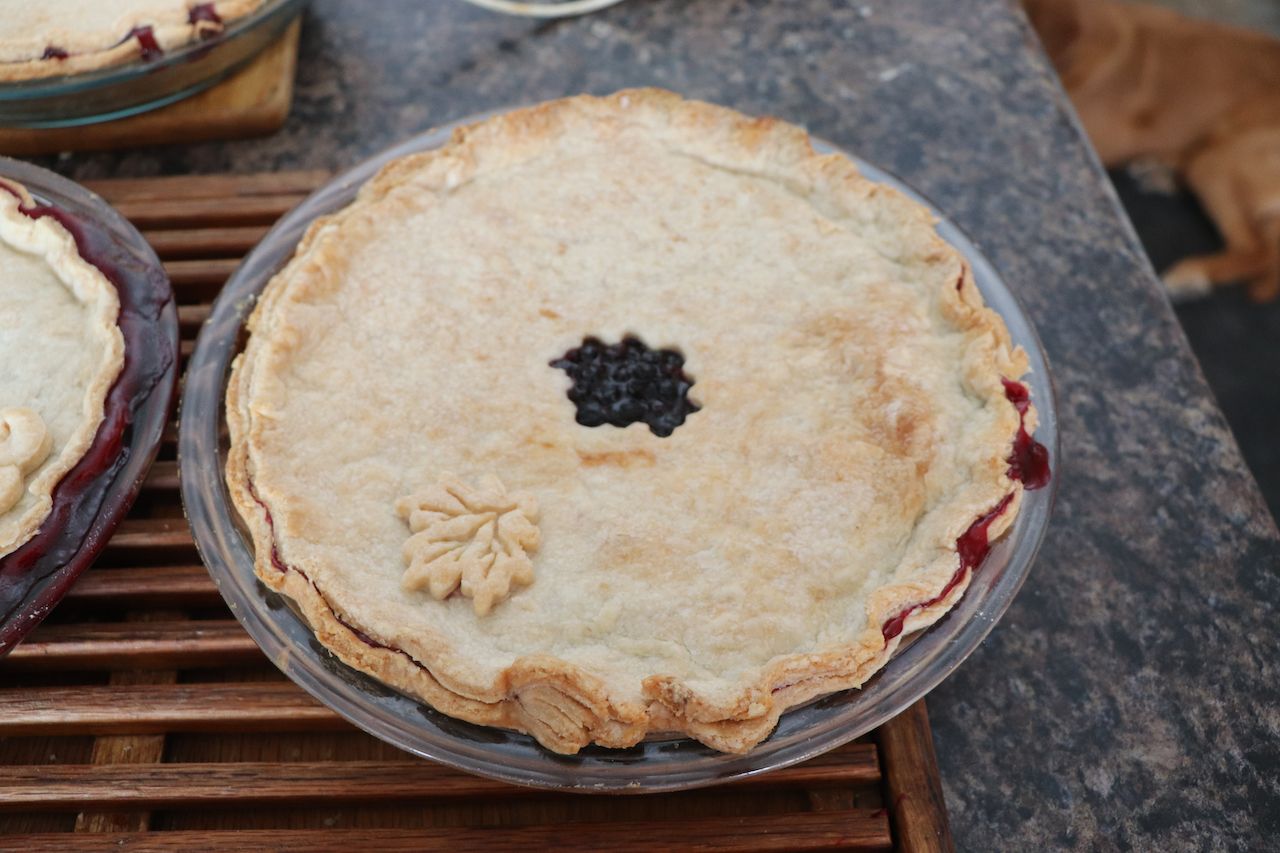 Saskatoon berries look like blueberries, but are more closely related to apples. The berries have a sweet almond flavor, and the plant is indigenous to western Canada. “Saskatoon” comes from the First Nations Cree language, though the berries are also called serviceberries and juneberries in the United States.

Saskatoon berries have long been a key part of the regional diet starting with the First Nations. Today, many people from Saskatchewan go out and pick wild berries themselves. One of the most popular uses is Saskatoon berry pie made with the berries, lemon, and almonds. The pie is so popular it even has its own postage stamp. 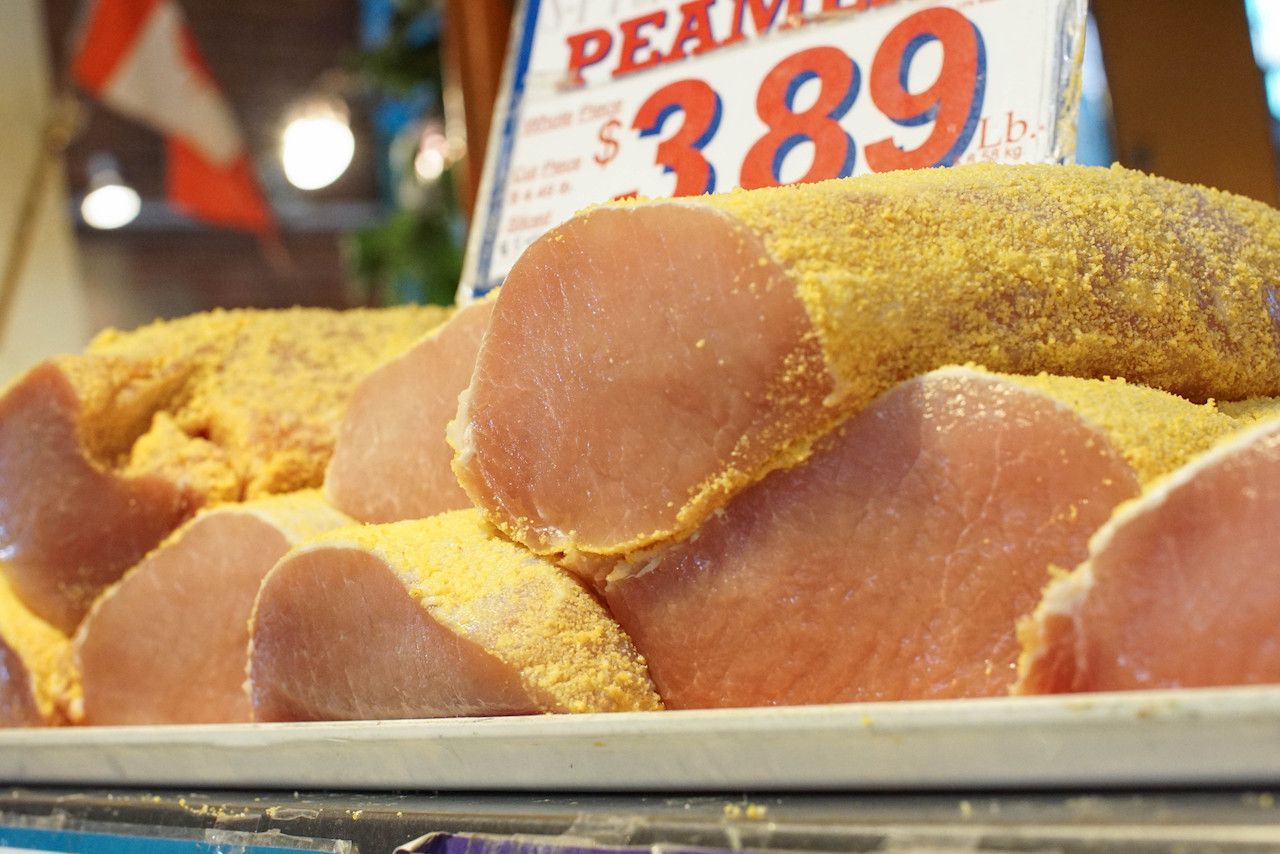 The bustling metropolis of Toronto is still colloquially called Hogtown for its place in history as a pork processing town. William Davies, an English immigrant to Canada who started the stockyard company that largely inspired Toronto’s nickname, is said to have invented peameal bacon. The original was brine-cured pork loins rolled in ground yellow peas to keep it preserved. Following World War I, cornmeal was used instead of peameal in the popularized peameal bacon.

Peameal bacon is usually sliced thick, and it tastes a bit more like a tender ham than streaky bacon. Peameal bacon replaces ham or bacon in a lot of breakfast sandwiches in Ontario.

Visitors to the maritimes usually flock to the area’s quality seafood, but to people living in Halifax, the capital of Nova Scotia, the Halifax donair is the dish to try. It all started in the 1970s with a Greek restaurateur named Peter Gamoulakos who wanted to bring gyros to Canada. The traditional Greek flavors didn’t really take with local palates, so Gamoulakos replaced the lamb meat with ground beef and made his own donair sauce out of evaporated milk, vinegar, sugar, and garlic. The sandwich became so popular that it was pronounced the municipality’s official food. While the Halifax donair is sold across the city, you can try the original at King of Donair. 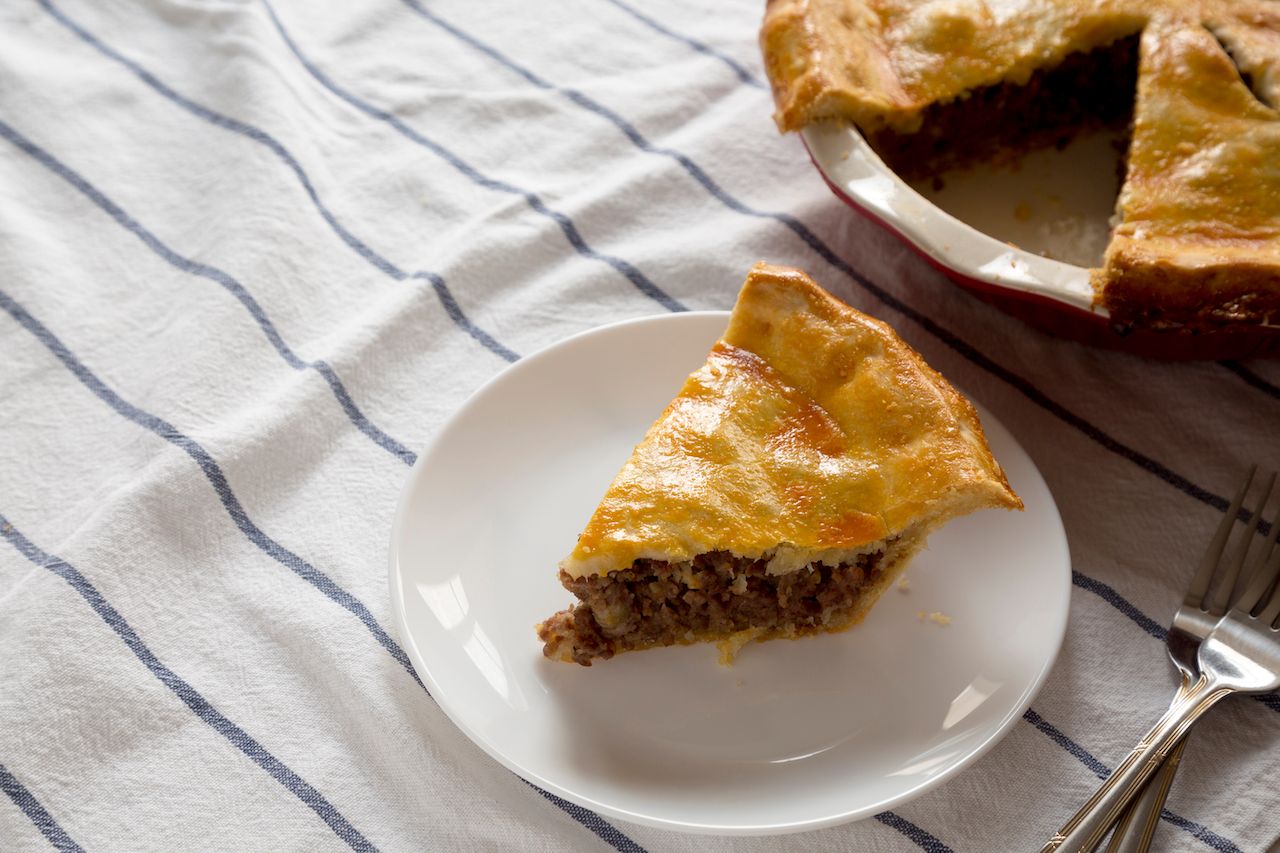 With its French influences, it’s hard to pick just one dish representative of Quebec. One favorite is tourtière, a sort of meat pie, that’s a homey specialty served around the holidays. Tourtière can be made with various kinds of meat, wild game, and potatoes. Restaurants in Montreal typically use finely ground pork and spice it with cinnamon and cloves. Tourtière is often served with a heaping dollop of ketchup. 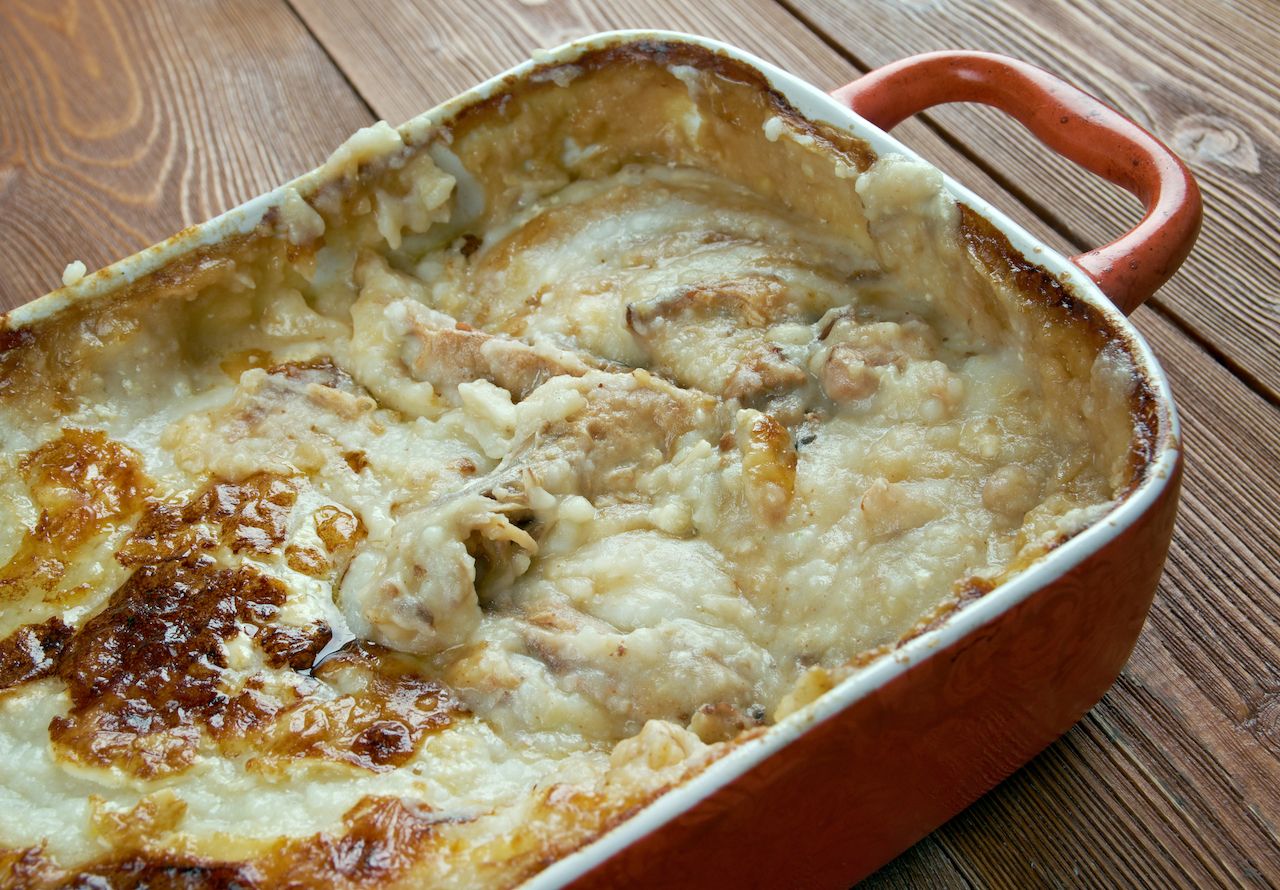 Rappie pie is a classic among the French-speaking Acadians that’s sort of like a mashed potato casserole. The first Acadians were French settlers in eastern Canada who were expelled from Canada by the British in the mid-18th century. When Britain took what is now Canada as its own, around 10,000 Acadians were forced to relocate to the 13 British colonies and the Caribbean. In the 1770s, many Acadians returned to Atlantic Canada, and with them came potatoes and a recipe for finely grated potatoes baked with meat: rappie pie. Today, rappie pie is a classic dish for Acadian families, especially in New Brunswick and Nova Scotia.

Trying poutine is of course mandatory when visiting Canada, but fans of poutine should also try fries with the works (FWTW), an extremely popular dish from Prince Edward Island, Canada’s smallest province.

According to locals, FWTW originated in 1975 when a potato warehouse employee was about to begin their night shift. They went to the popular eatery Pat’s Take-Out and ordered fries with gravy. Pat Pineau, the owner at the time, thought that the meal wouldn’t be substantial enough and added ground hamburger, extra gravy, and canned peas to the meal. FWTW rapidly became popular on the island, and many restaurants around the small province today serve the dish. After Pat Pineau’s passing, the eatery was sold and renamed G&E Restaurant, where you can still find the famous dish. 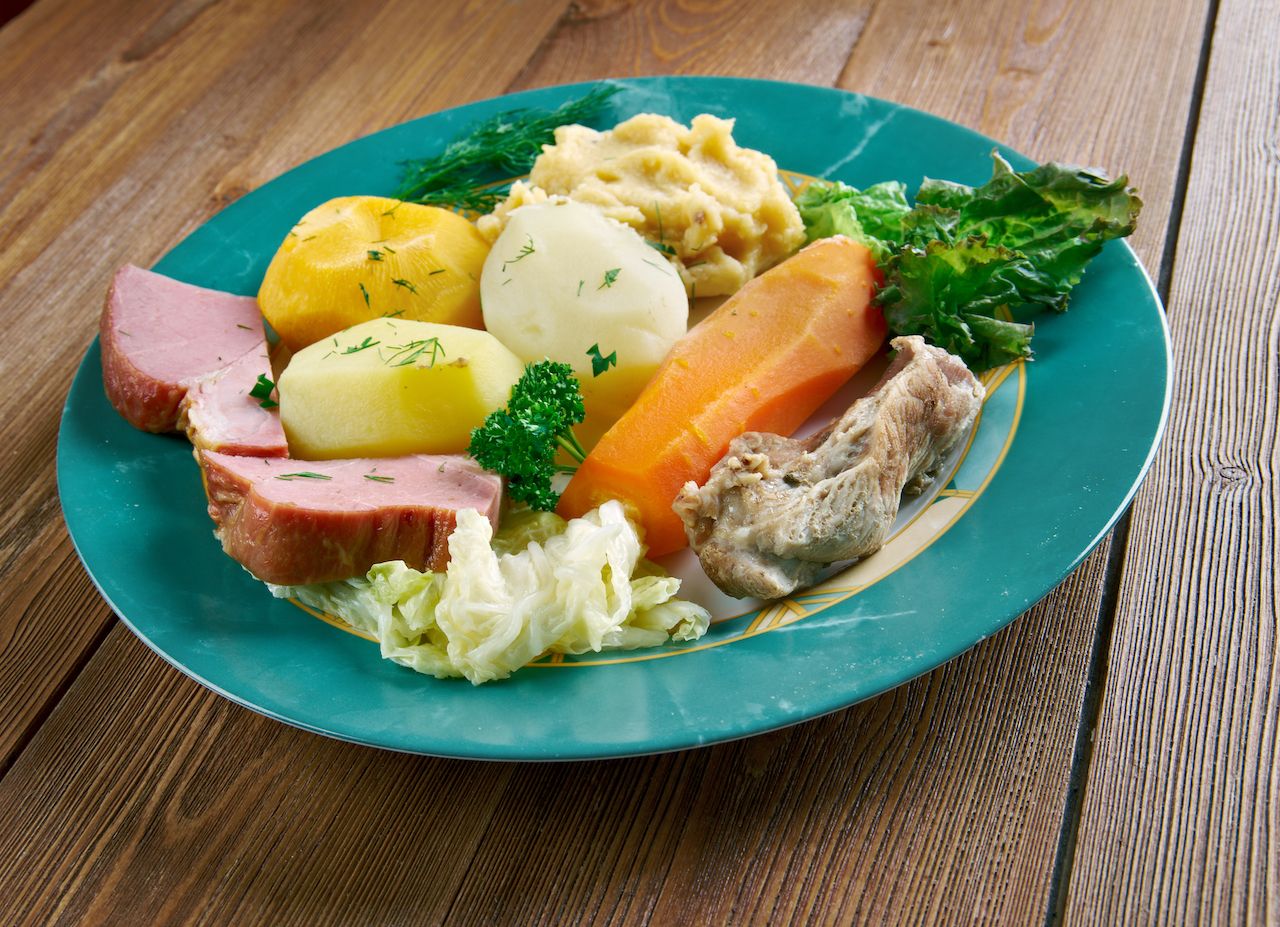 Jiggs’ dinner, sometimes called boiled or cooked dinner, is the quintessential Sunday get-together meal in Newfoundland and Labrador. The one-pot meal consists of salt beef (similar to corned beef) that’s simmered with potatoes, turnips, cabbage, carrots, and greens. Additionally, yellow peas are cooked in a bag in the same pot and served as a side called pease pudding. The meal can often be finished off with figgy duff, a dessert pudding resembling spotted dick made by boiling or steaming a spiced batter with raisins.

The names reflect the large population of Irish and British immigrants to the area, as Jiggs’ dinner gets its name from an Irish comic strip character and the term figgy duff is thought to originate from Cornwall, England. Most pubs will have Jiggs’ dinner on their Sunday menus. 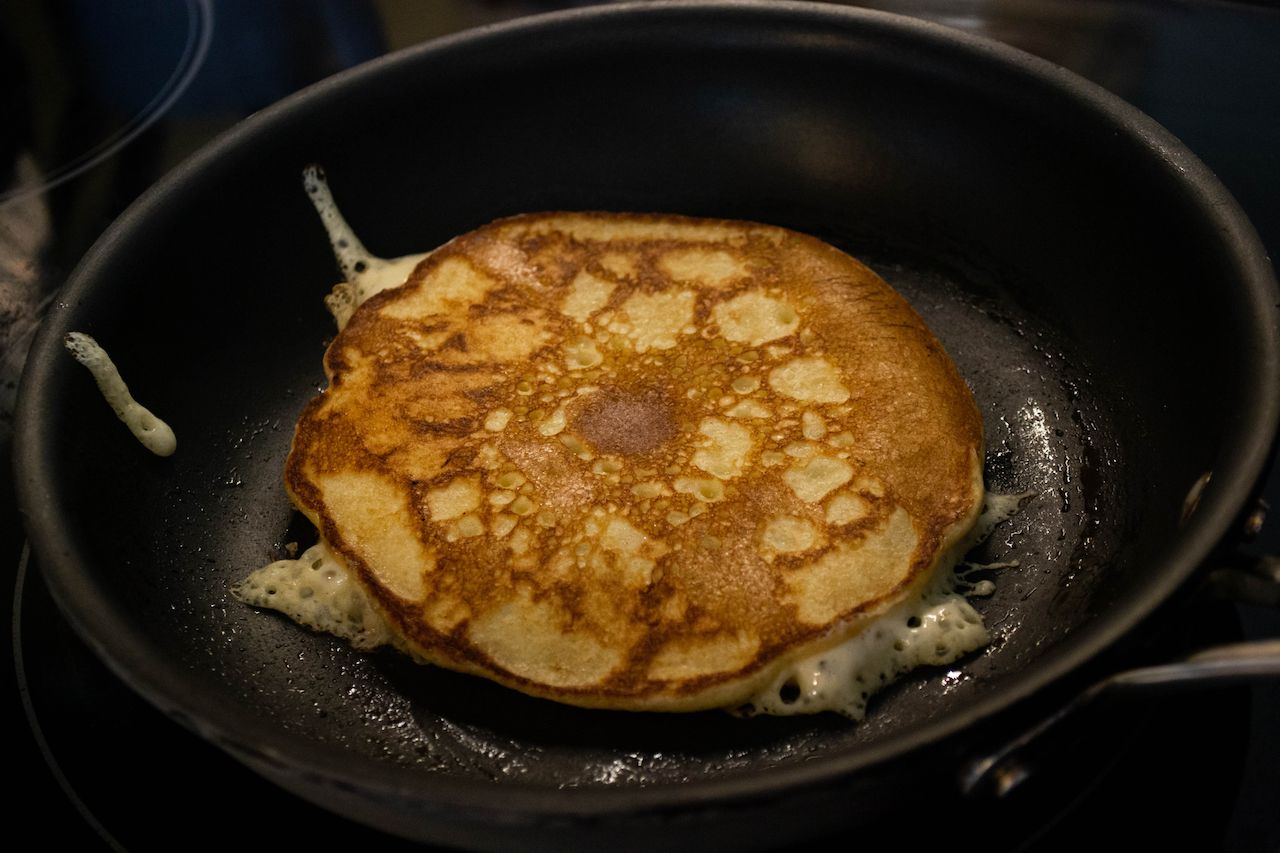 Sourdough pancakes served as an important staple during the Klondike Gold Rush in the late 19th century. An estimated 100,000 prospectors made the difficult journey up north, and whipping up a batch of sourdough pancakes was a quick and efficient meal. In fact, many Klondikers became known as “sourdoughs” since they kept their starters warm beneath their jackets.

Sourdough even has a winter festival called the Yukon Sourdough Rendezvous, featuring a sourdough pancake breakfast. Interestingly, Yukon is also home to Canada’s oldest sourdough starter, belonging to a woman called Ione Christensen in the territorial capital of Whitehorse. The sourdough starter is thought to be at least 120 years old and was passed down from Christensen’s great-grandfather who was a prospector during the gold rush.

Whale is an important part of the Inuit diet, and that includes the skin and blubber. Muktuk is usually made from the blubber of beluga, bowhead, or narwhale depending on location and availability. It’s traditionally served raw in small cubes, although you can also find it fried, pickled, or stewed. It tastes somewhat like a fishy jerky, with the blubber tasting like the white of a boiled egg while the skin is chewy. 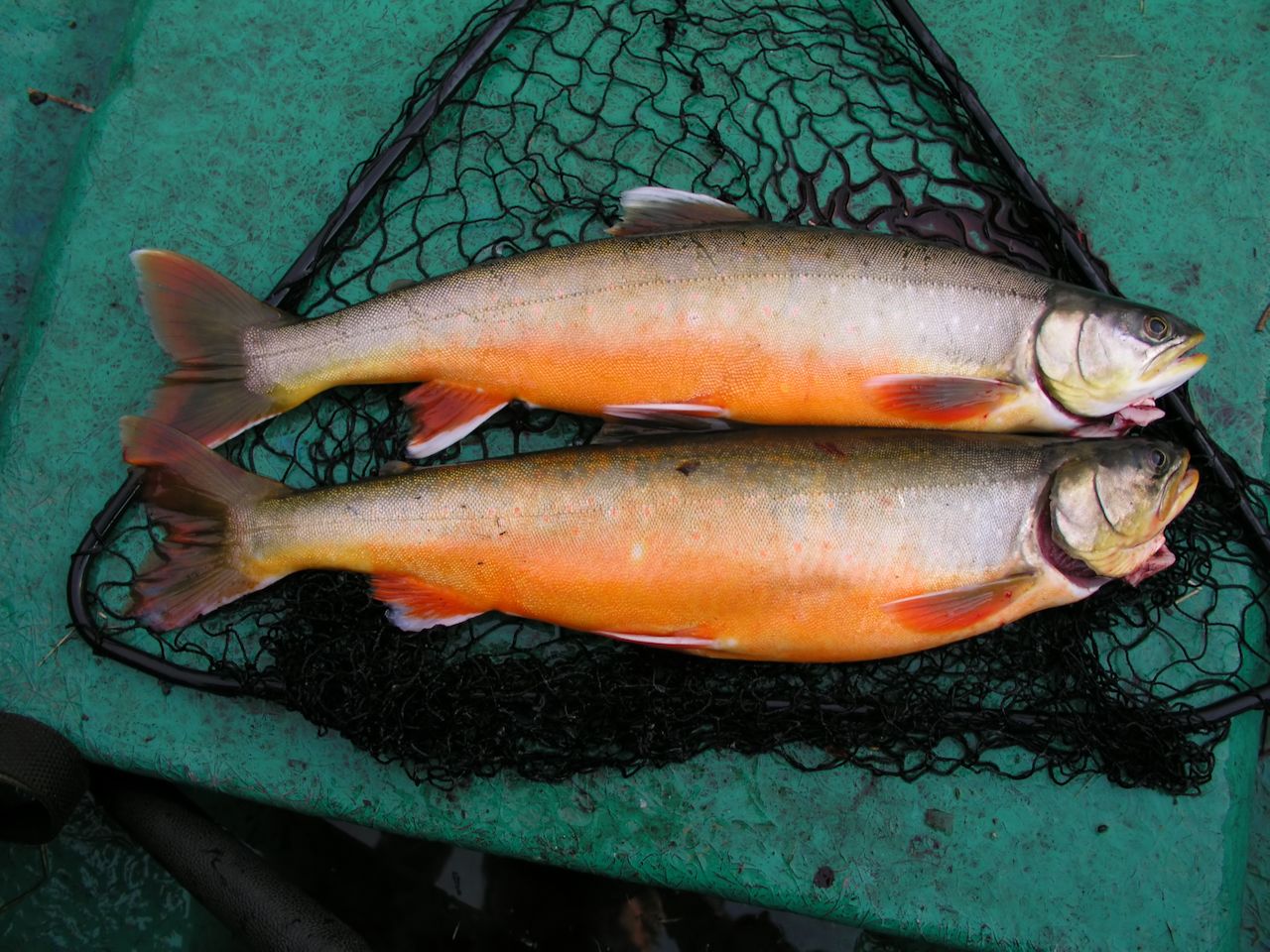 Around 85 percent of the people living in Nunavut are Inuit, and the local diet consists largely of what can be hunted and fished. Arctic char is a freshwater fish with a flavor that’s reminiscent of both salmon and trout. It’s one of the most sustainable fish to eat, according to Monterey Bay Aquarium’s Seafood Watch. Arctic char is traditionally eaten raw, smoked, or dried, while modern restaurants have also incorporated it in Western cooking methods such as in Arctic char chowder.

DessertCanada’s National Dessert Has a Food Trail Every Dessert Lover Needs To Try
Tagged
Food + Drink Canada Toronto, Canada
What did you think of this story?
Meh
Good
Awesome

The 20 Happiest Countries in the World, 2022
What Happens When You Accidentally Drive To the Canadian Border With Cannabis
The 13 Top-Rated Toronto Restaurants on Canada’s First Michelin Guide
50% of Canadians Live South of This Line
An Overnight Train Is the Best Way To Experience Canada’s Winter Wilderness

The Ultimate LGBTQ+ Guide To Toronto

The Best Airbnbs in Downtown Toronto, From the Harbourfront To the CN Tower