Located in the Gulf of Saint-Lawrence, a five hour ferry ride from Prince Edward Island, is Îles de la Madeleine (sometimes also known as The Magdalen Islands in English). This pristine Québec archipelago is a welcome escape from the mainland; with its red sandstone cliffs, rolling green hills, sandy beaches, and cool salty waters. You won’t see fences here, unless there is livestock in need of boundaries, just wide open spaces, and brightly coloured houses.

Îles de la Madeleine (Munagesunok in Mi’kmaw) is part of the traditional lands of the Mi’kma’ki people of the Mi’kmaw Nation, whose lands also include parts of Canada’s Atlantic Provinces, Québec’s Gaspé Peninsula, and Maine. In the summer months, the Mi’kma’ki people likely fished and hunted around the archipelago, which had an abundance of seals, walruses, herring, and cod.

Prior to the arrival of Jacques Cartier on Île Brion in 1534, Basque fishermen frequented the waters of the archipelago. Some 200 years later, several Acadian families were forced to move to the archipelago by the English, and the first real settlement here was established around 1755. At the time, the waters were higher, and the islands were not connected. In fact, the islands remained unconnected until the early-20th-century. 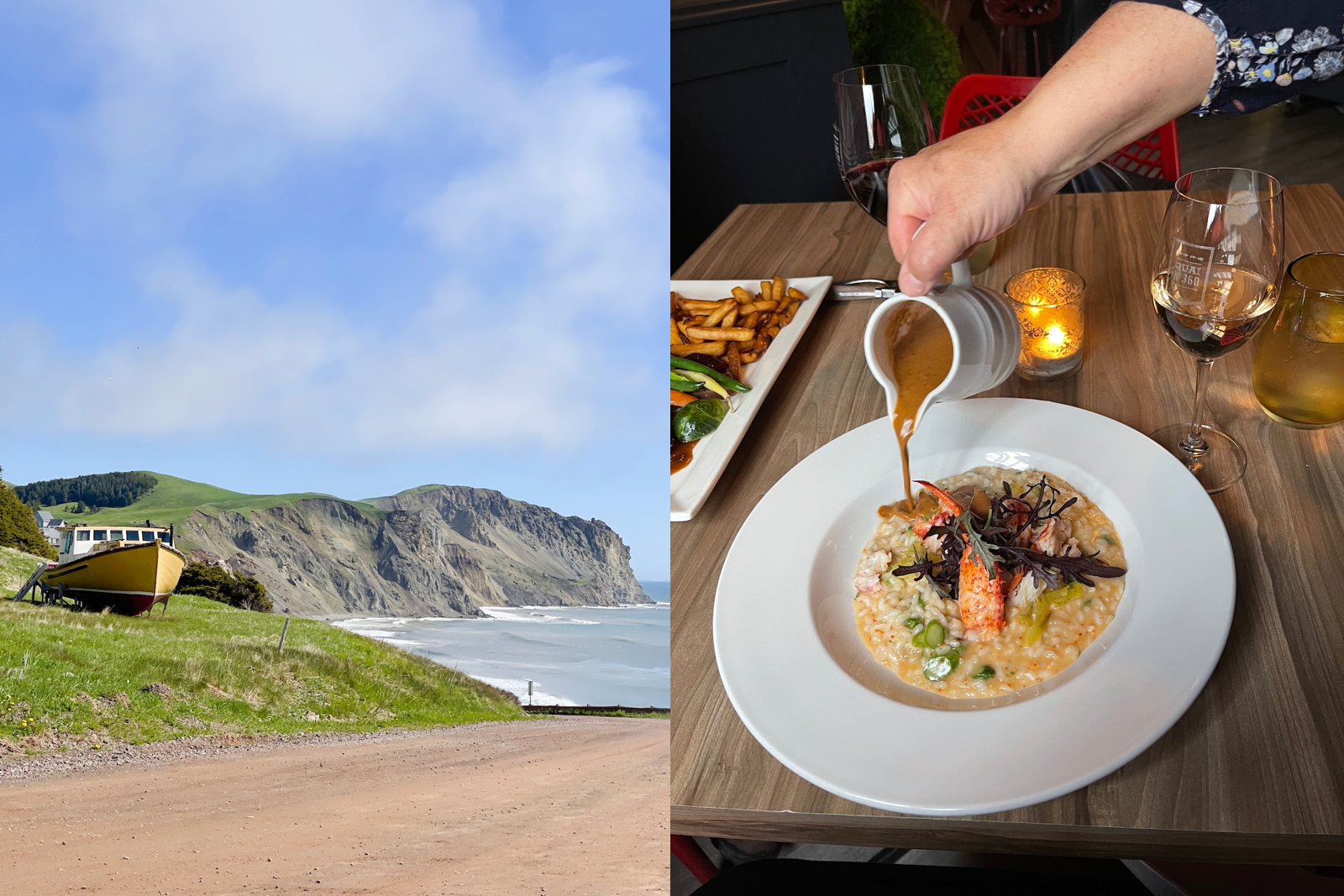 View from Cap Alright in Havre-aux-Maisons and the lobster risotto at Quai 360. Photo: Pamela MacNaughtan

There are eight islands in the archipelago, six of which – Grande Entrée, Grosse Île, Pointe aux Loups, Havre aux Maisons, Cap-aux-Meules, and Havre-Aubert – are connected by sandbars and a small highway, QC-199. The remaining two are Île d’Entrée, which can be reached by ferry from Cap-aux-Meules, and uninhabited Île Brion.

You’ll find that each island has its own vibe, and in some cases, their own accent as well. While the archipelago is predominantly French-speaking, there are two English-speaking islands, Grosse-Île and Île d’Entrée. The island’s population of 12,010 is Acadian, French, and English. This blend of cultures has birthed a unique local dialect, which is heavily laced with marine vocabulary.

Fishing is a major part of life here, and almost every family on the islands has fishermen in their ranks. The waters surrounding the archipelago are rich with herring, cod, scallops, muscles, and lobsters. Most of which is sold to countries such as Japan and the United States. Lobsters are sweet and a little salty thanks, in part, to the rocky bottom of the Saint-Lawrence river.

There was a time on the archipelago when having a lobster sandwich in your school lunch was a mark of shame. It meant your father was a fisherman, and that your family likely could not afford peanut butter and jam, as food from the mainland arrives by ferry and can be quite expensive. Today, there is increased pride surrounding the foods caught, cultivated, and created on Îles de la Madeleine. Local chefs and the younger generations are working to keep Madelinot traditions alive, while also innovating, creating an exciting array of culinary experiences. Here is where to go and what to eat on Îles de la Madeleine.

Where to eat in Cap-aux-Meules 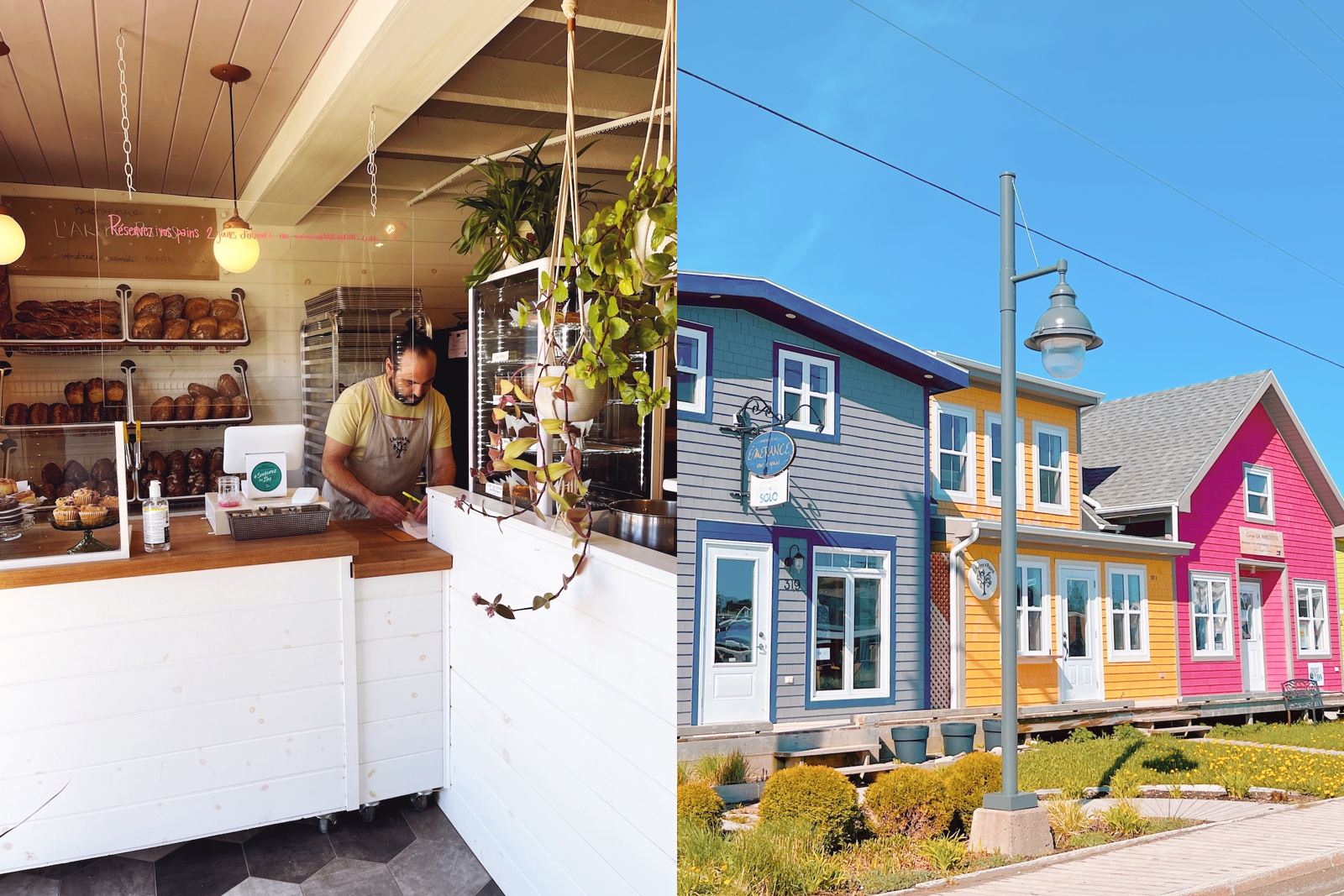 Cap-aux-Meules is the commercial heart of Îles de la Madeleine. This is where the ferry docks, and you’ll find a handful of restaurants and bars here. As well as shops selling artisan handicrafts.

Quai 360: Located near the ferry port in Cap-aux-Meules, this small unpretentious restaurant is one of the best on the archipelago. They are known for their market cuisine, especially dishes made with lamb or lobster. The island lamb ribs with spiced honey are highly recommended when available.

L’Arbre à Pains: A few doors down from Quai 360 you’ll spot L’Arbre à Pains, a small pâtisserie in a yellow house. Stop by to try their macaroons, cupcakes, scones, and little pastries. The croissants are the best on the archipelago. Many are made with local ingredients such as beets, zucchini, carrots, dune peppers, and lavender.

Chez Renard: A small bistro in a bright green house, head to Chez Renard for an excellent lunch or dinner. The menu is small and seasonal. The café counter features baked goods from L’Arbre à Pains, which is down the street.

Les Pas Perdu: There are two Les Pas Perdu, one is a bar with live musical performances (green house), the other is a restaurant (orange house), and they are a 2 minute drive apart. The restaurant serves beer from À l’Abri de la Tempête, in l’Étang-du-Nord, and their poutine includes cheese from Pied-de-Vent, on Havre-aux-Maisons. You will also see a loup-marin burger, which is made from seal.

The use of seal meat and oil is common in traditional Madelinot cuisine. The seal (loup-marin) population on the archipelago is quite large, and in winter you can visit the Îles de la Madeleine and participate in seal watching activities. Due to the size of the population, a small number are culled each year. Nothing goes to waste, however, and every part of the seal that can be used, is.

Where to eat in l’Étang-du-Nord 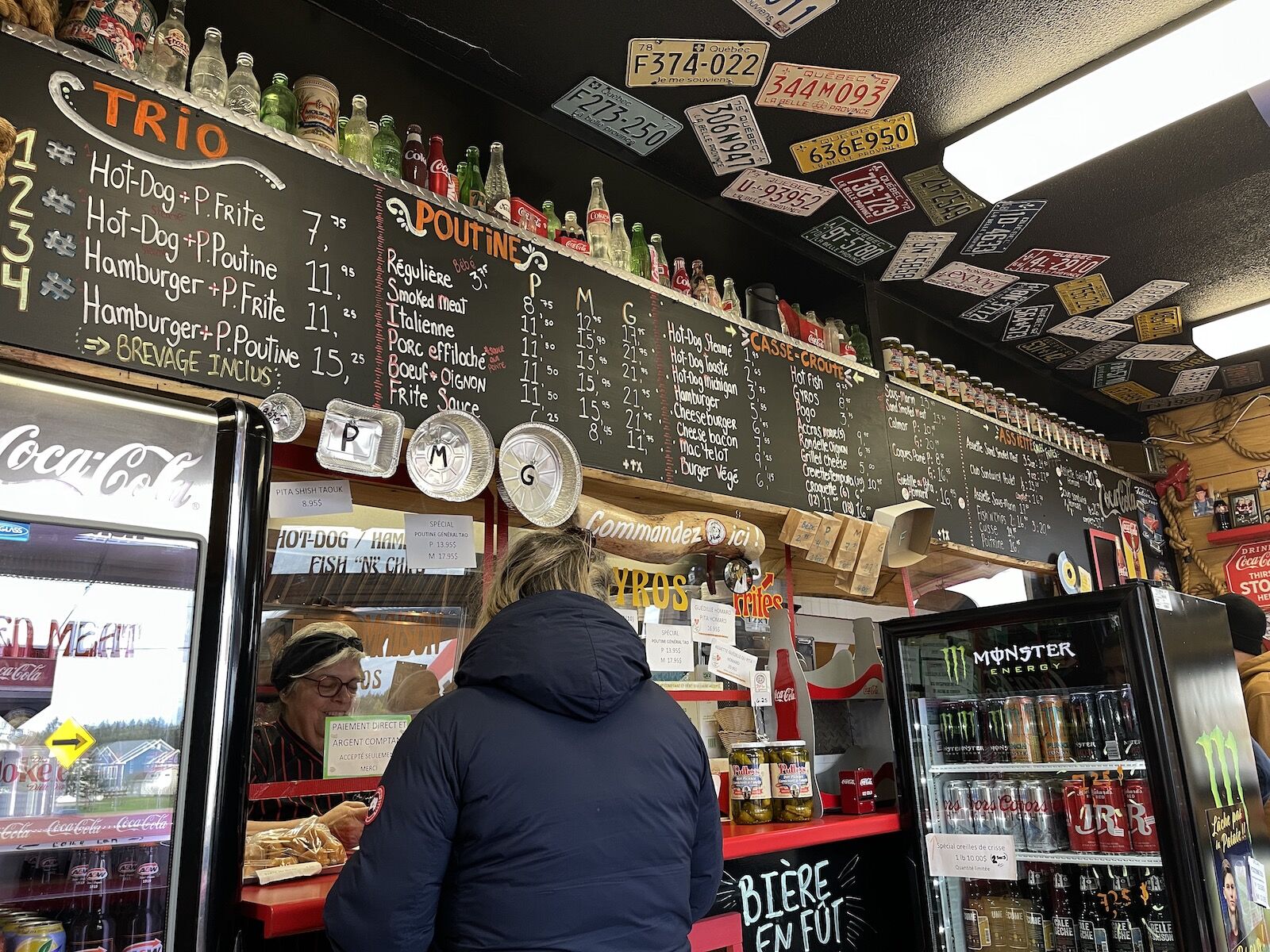 Located on the island of Cap-aux-Meules, l’Étang-du-Nord is home of one of the largest wooden churches in North America, La Vernière. The fishing harbor is a go-to spot for watching the sunset, strolling down the nearby beach, or dining at one of the restaurants closeby.

Au P’tit Capitaine: One of the best cass-croûte on the archipelago, this small red house is always busy. At Au P’tit Capitaine, you’ll find a menu full of poutine, burgers, smoked meat, and lobster rolls. Sometimes, they’ll have fried chicken. Honestly, everything is good here, making it a can’t-miss experience.

Gourmand de Nature: Johanne is a self-taught chef who is known for her salivating menus. Gourmande de Nature is a destination for folks who plan trips around where to eat. The shop is filled with local artisanal products (many made in-house), and ceramics. The bistro menu features local cuisine. Pop by for a tasty light lunch, or make a dinner reservation and immerse yourself in dishes made with local delicacies such as salt cod and seal. Johanne also teaches cooking classes, in French. 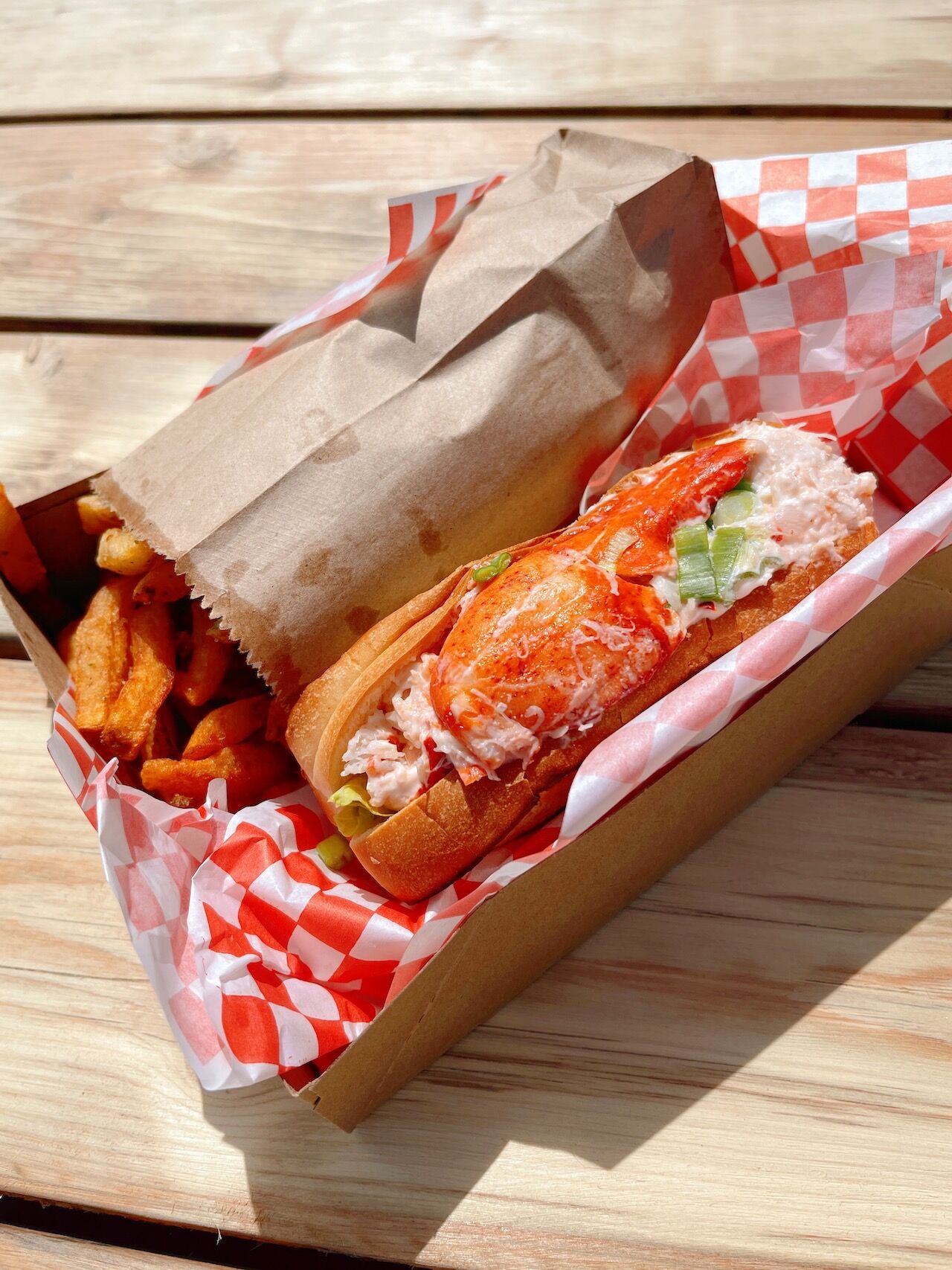 LA Cantine: Located near Parc de Gros Cap, LA cantine can be found at the LA renaissance cannery. Inside you can purchase live lobsters, as well as lobster meat that has been cooked and immediately frozen. The highlight here, however, is the lobster rolls, which can be ordered with or without fries.

À l’abri de la Tempête: This is the archipelago’s microbrewery, and it’s a can’t-miss if you are a craft beer lover. The brewery is located next to the Corfu Island beach, making it an ideal spot for watching the sunset. The brewery produces over nine beers here, including a beer called Corps Mort, which is 11 percent alcohol and is made using smoked malt with herring from Fumoir d’Antan, on Havre-aux-Maisons.

Where to eat in Havre-Aubert 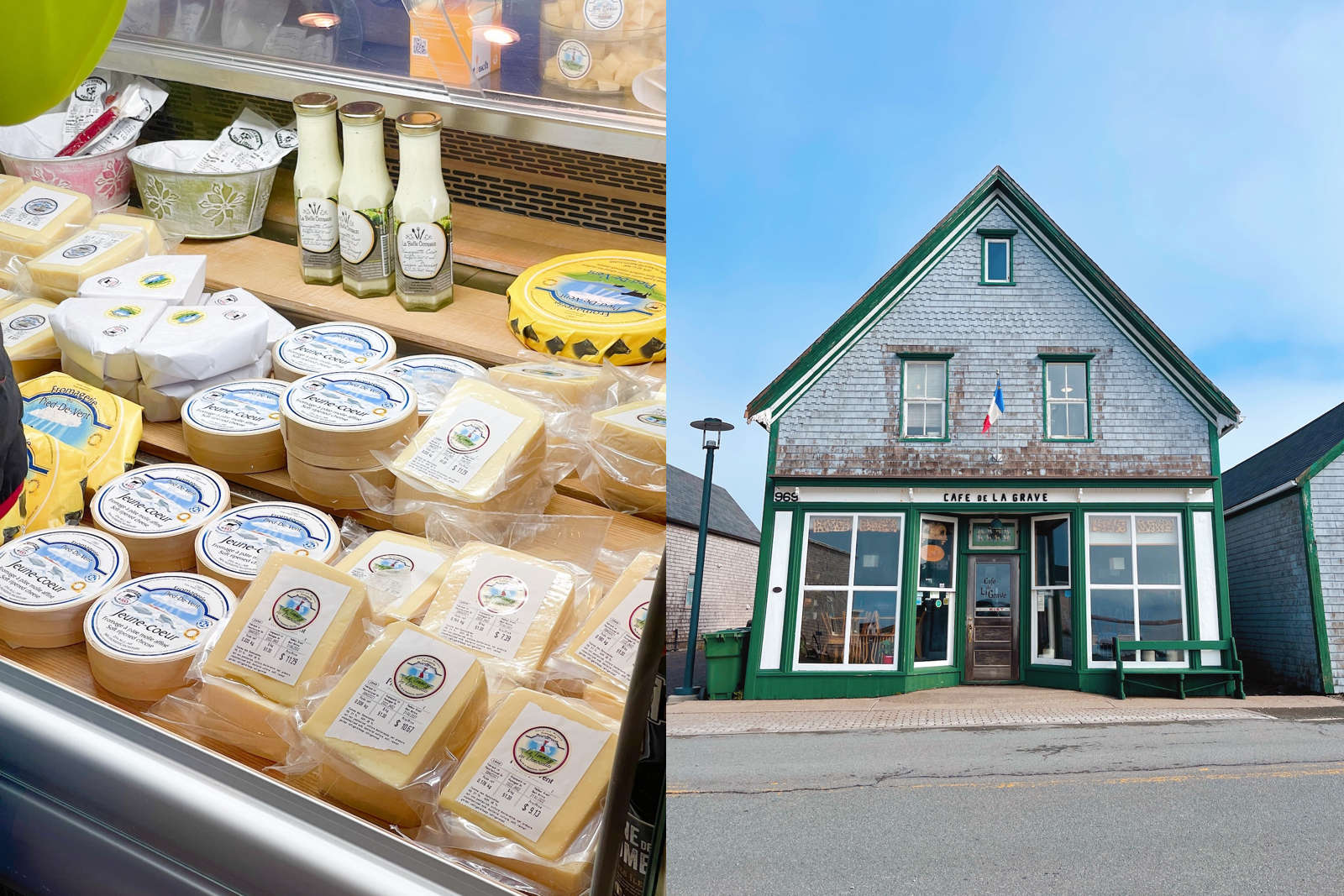 A large island, Havre-Aubert is home to many artists and producers, as well as La Grâve, the first fishing settlement on the archipelago. There are a few restaurants and producers here to check out.

Café La Grave: This restaurant in La Grâve has been a local institution since 1980, however, the building dates back to 1865 when the area was the port of entry for the islands, and the building was a general store. Today, it is a café-restaurant with live music events. On the menu you’ll find traditional foods such as seal, pot-en-pot, and salt cod, as well as other tasty options.

Fromagerie Les Biquettes à l’Air: This small fromagerie is the first to have dairy goats on Îles de la Madeleine. The fromagerie sells a variety of tasty goat cheese (over 25 varieties), as well as yogurt, chocolate spread, and charcuterie made with goat meat. A delightful stop to pick up foods to enjoy on a picnic, or to take home.

Verger Poméloi: A cidrerie in Bassin, Verger Poméloi is best known for their fortified apple cider, Poméloi, which is 20 percent alcohol, and has an apple inside the bottle. Visit the cidrerie for a tasting, and try their gin as well.

Where to eat in Havre-aux-Maisons 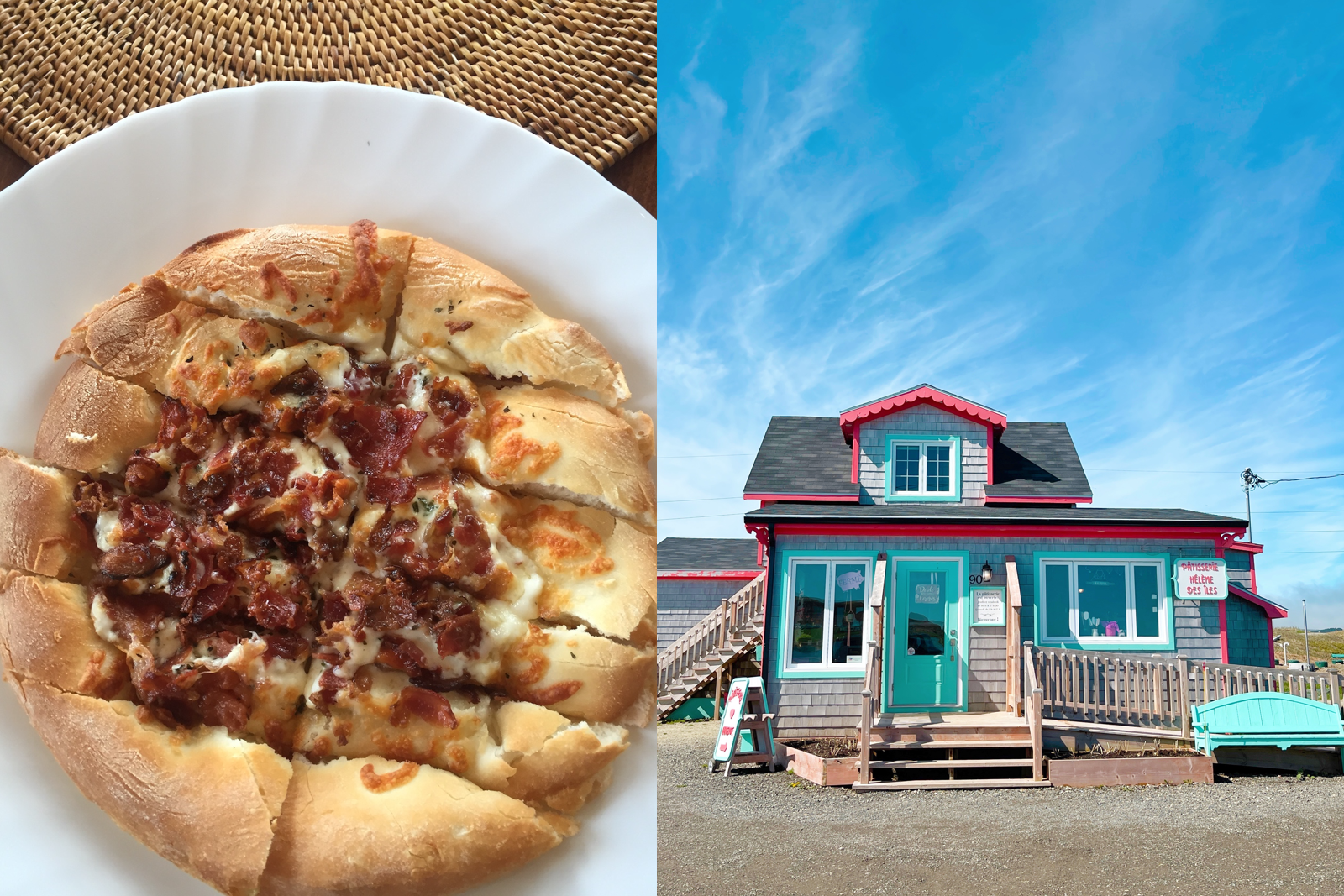 Havre-aux-Maisons is best known for its rolling green hills and brightly painted houses. It is also home to glass-blowers, a few food producers, and eateries that are worth checking out.

Pizza d’la Pointe: It is hard to find a better pizza on the archipelago than at Pizza d’la Pointe. This restaurant has been recently renovated, and is a relaxing space with pretty views. The menu has around 16 pizza varieties, including vegetarian options, as well as seafood (yes, there is also one with loup-marin confit).

Hélène des Iles: The sister cafe of Pizza d’la Pointe, and located next door, Hélène is a can’t-miss for all things pastry. Stop for the croissants and chocolatines. Honestly, you will probably want to go back the next day for more.

Fromagerie du Pied de Vent: Pied-de-Vent means “foot of the wind”, and is also the name of this shop’s signature cheese. The cheesemakers here also produce cheddar, as well as tomme-style cheese. There is an ecomusée (a type of museum based on a local speciality or community) where you can learn about how the cheeses are made.

Fumoir D’antan: At one time there were around six herring smokehouses on the archipelago; today, however, Fumoir D’antan is the only still in operation. Visit their ecomusée to learn about the history of smokehouses in Îles de la Madeleine, and stop by the boutique to try some smoked herring.

Where to eat in Grosse-Île

Grosse-Île is home to one of two English communities on Îles de la Madeleine. This area, also known as Old Harry, is home to some of the best beaches in the archipelago. It is mostly residential, with a couple of casse-croûte, the name for a restaurant that serves a light meal or snacks.

Cap Dauphin Fish Shack: This is probably the best of the two casse-crôute in Grosse-Île. It is located at the fishing harbor, Cap dauphin Fish Shack was once inside a refrigerator shipping container. Today, it is a pretty house with washed wooden shingles and plenty of patio seating. The lobster rolls here are quite good, as well as the chowder, and poutine.

Beaches and IslandsThis Remote Indian Island Has Some of the Most Beautiful Beaches in Asia
Tagged
Food + Drink Travel Quebec, Canada
What did you think of this story?
Meh
Good
Awesome