When thinking about India, it’s easy to conjure up the same mental images shown of India on TV and in movies.

But India is a massive country with 4,671 miles of coastline between the mainland and various islands. While the “digital nomad” millennial-traveler crowd may know of popular coastal destinations like Goa, most people don’t think of the nation’s beachy areas. And even more rarely do they associate India with the Andaman and Nicobar Islands and its leading tourist destination, Havelock Island. 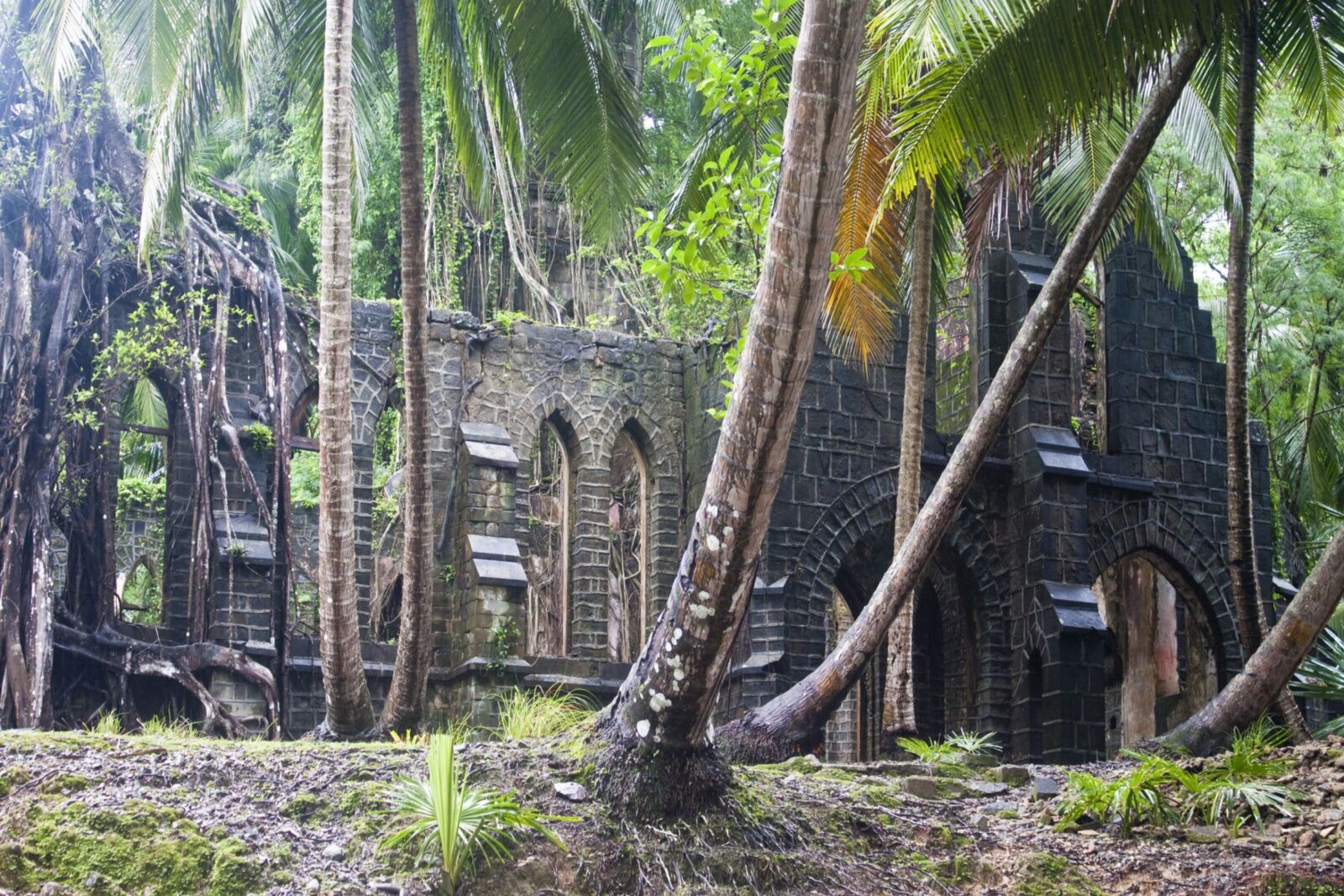 With a $35 tourist visa, anyone can travel more than 800 miles from the subcontinent to the eastern Bay of Bengal between India and Burma (also known as Myanmar). That’s the location of the Andaman and Nicobar Islands, a remote archipelago of 572 islands that served as penal colonies during British rule. Today, it’s home to some of the most isolated Indigenous peoples on earth, such as the Sentinelese (in North Sentinel Island, and at the center of 2018’s missionary controversy), the Jarawas (in Great Andaman), and the Shompen (in the Nicobar Islands), in addition to Indians and expats from around the world.

The most developed island for tourism is in the South Andaman district. It used to be called Havelock Island, after British General Sir Henry Havelock. While most people still call it that, the name was changed in 2018 to “Swaraj Island” or “Swaraj Dweep,” meaning “self-rule island” in Hindi.

It’s hands-down the most developed of the A&N islands, but it’s still less developed than most beachy destinations in the Indian Ocean like Maldives. It’s a place where visitors can slow down, leave the crowds of the mainland behind, and discover a side to India they never dreamed about. 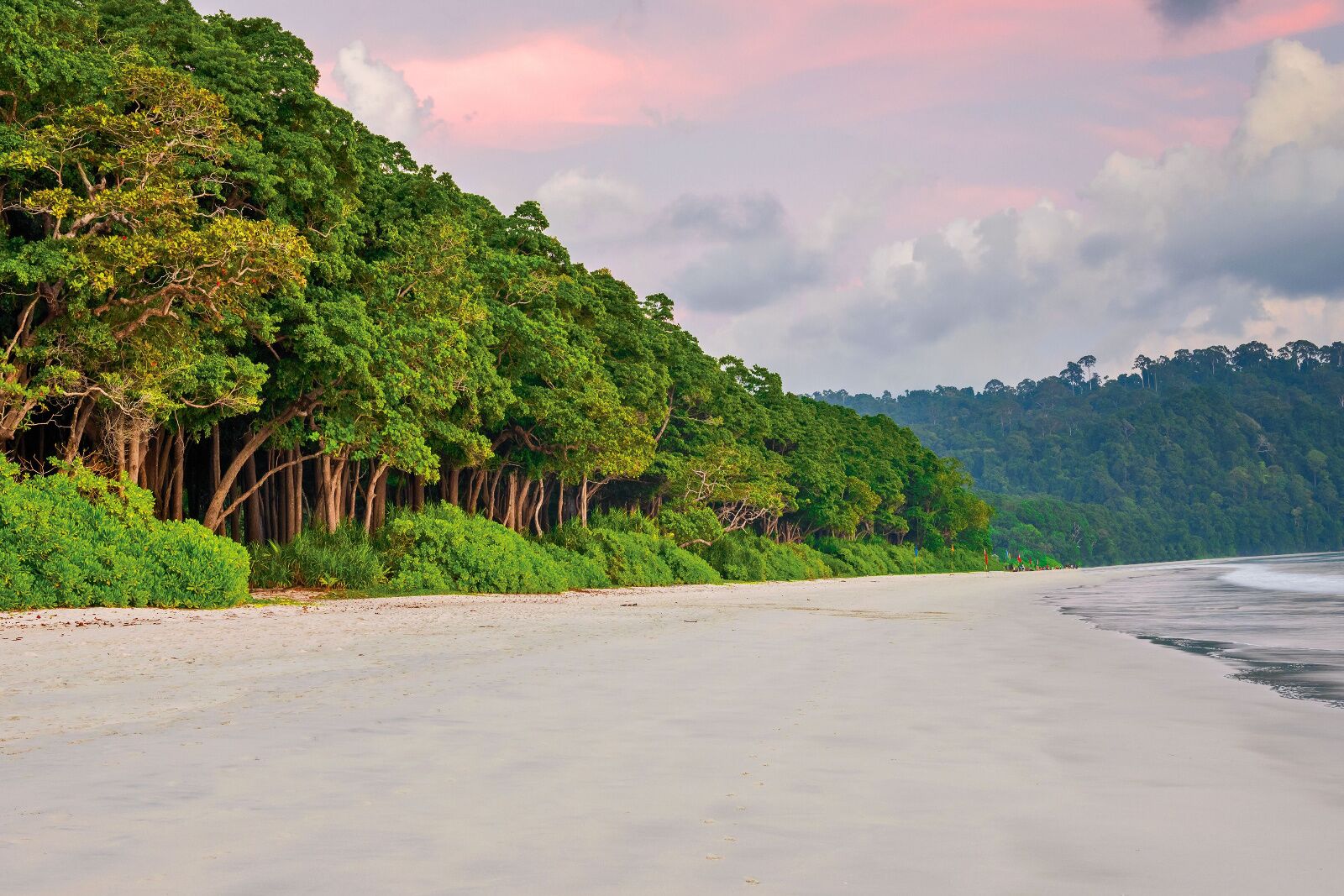 On Swaraj Dweep, most beaches are known by a number based on their progressive distances from the harbor. So although Radhanagar Beach is the best beach on Havelock Island and considered the top spot, it’s technically called Beach Seven. The inviting beach won the 2019 Tripadvisor Travelers’ Choice Award for the best beach in Asia, and rated at number six on the list of the top 25 best beaches in the world.

But the truth is that nothing can really prepare travelers for what awaits at this Havelock Island beach. It’s a gift from Mother Nature. Tourists usually congregate by the main access path at the first beautiful spot they see.

So instead, visitors should make their way either left or right to the emptier side of the beach (both are great options). Either direction has fine sand, clear water, and a wide, mirror-like shoreline to reflect the tall palm trees and bright sun. It’s extremely peaceful and the perfect place to find a moment of absolute stillness, punctuated only by the occasional gentle wave. Plan to stay till sunset and possibly repeat the next day. 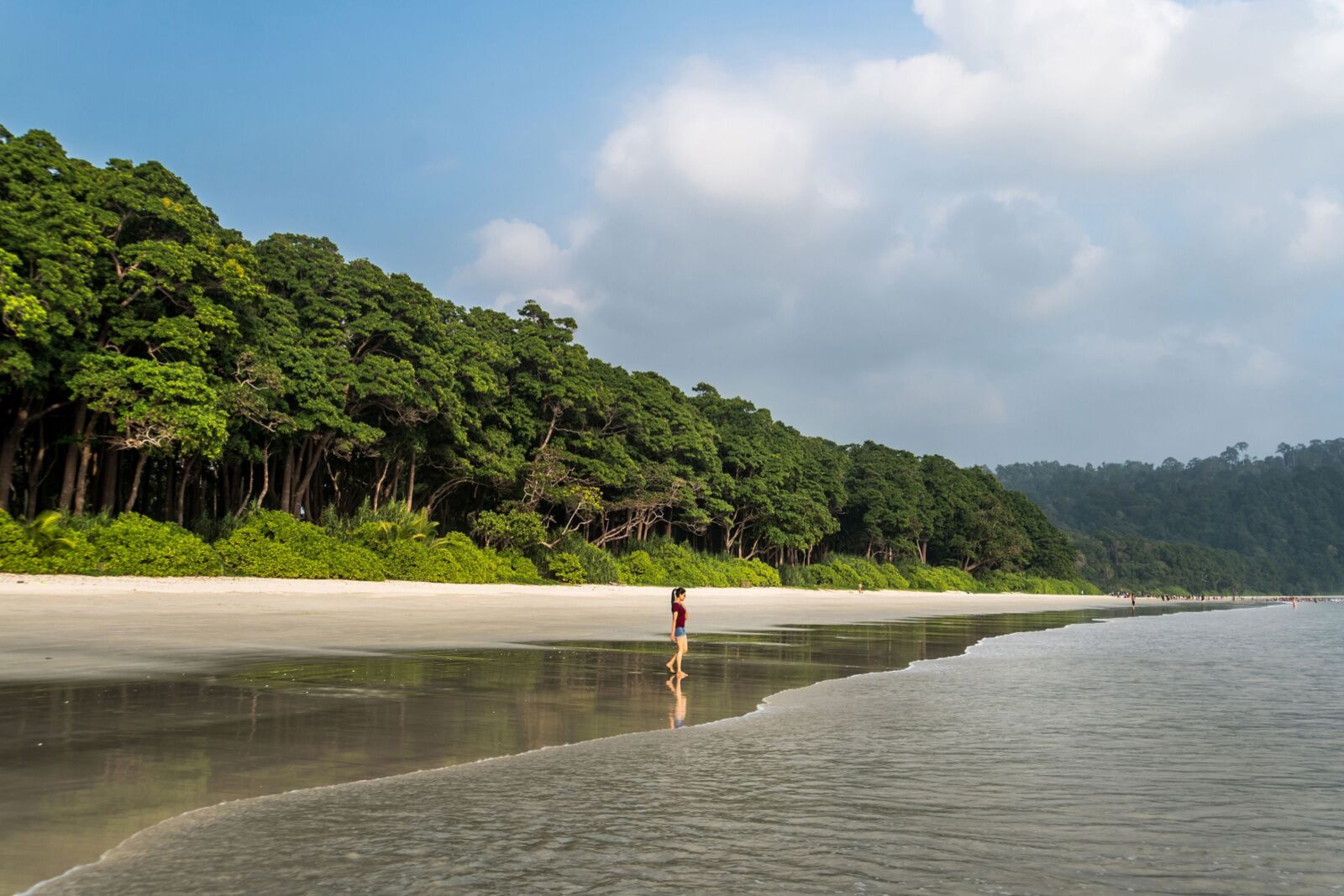 But seven isn’t the only lucky number on Havelock Island. Vijay Nagar Beach (Beach Five) is on the opposite coast and is more temperamental than Radhanagar. There, the rhythm of the day is marked by the high and low tides. At low tide, the beach is dotted with boats ashore along the mangrove-fringed coast.

As the water rises, the sea becomes more reminiscent of the nearby Maldives, framed by blueish-green forests on uninhabited islands in the distance. (By the way, they’re John Lawrence Island and Sir William Peel Island.) Vijay Nagar Beach runs into Govind Nagar Beach (Beach Three) and Nemo Reef (Beach Two) to the north. 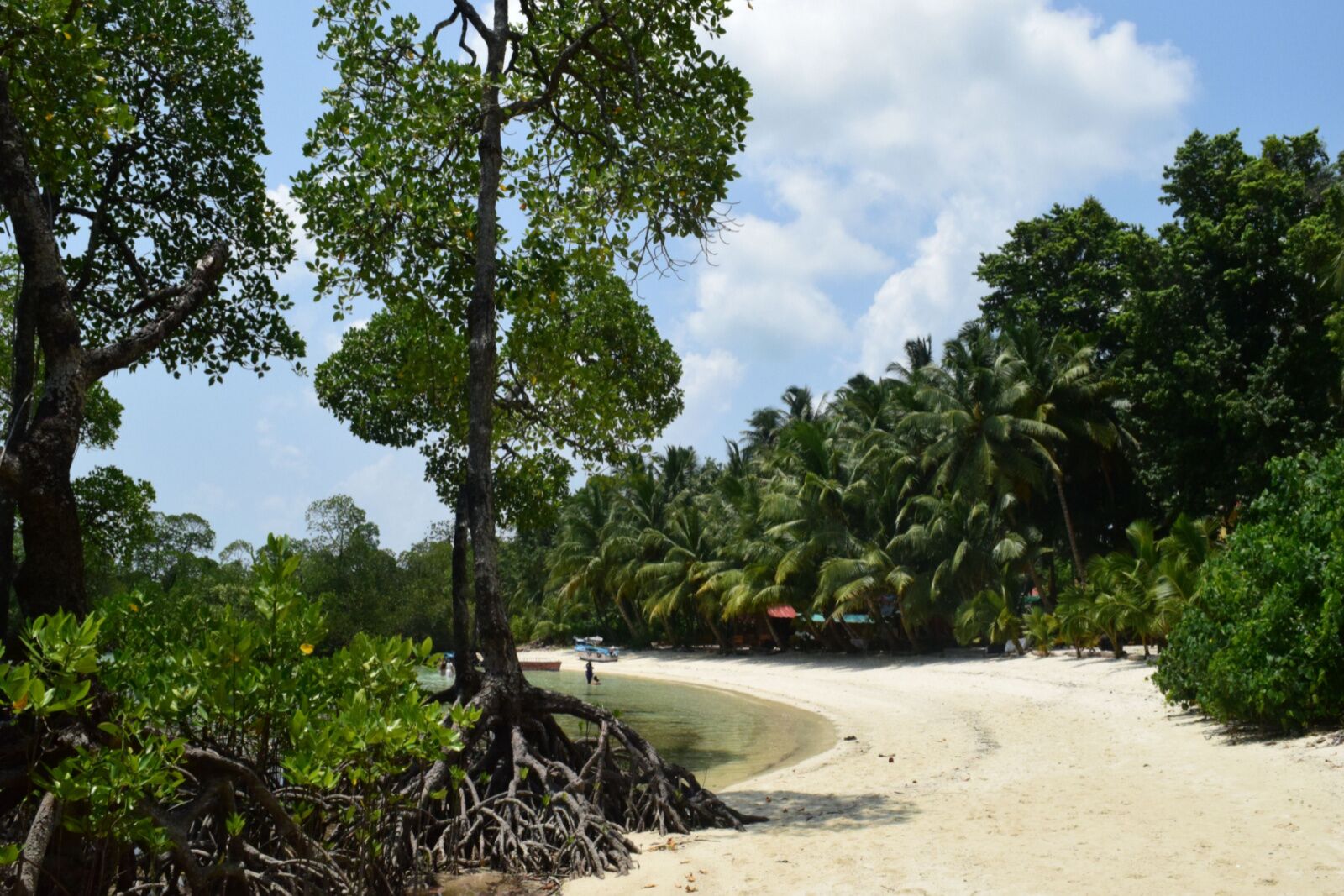 Just south of Beach Five is the cleanest and most beautiful stretch of another beach known as Kalapathar (which translates to “black rock.”) With a floating bridge, it may look a little touristy, but it’s simply fantastic. Have a dip in the deep turquoise water, then buy a fresh coconut from a nearby stall and head south to the secret part of the island. Black rocks block access through the water for a few meters, but after dodging the rocks and washed-up tree trunks, the path reaches a secluded cove resembling a natural pool. It’s still Kalapathar, but without very many tourists.

Another fantastic Havelock Island beach is Elephant Beach, though it was seriously damaged by the 2004 tsunami. The devastation is still visible today and the partially destroyed beach can be a bit eerie. Perhaps that’s why it’s more renowned as a hub for on-water activities. The choices for visitors are endless, from snorkeling to kayaking, jet skiing, parasailing, “sea walking” (similar to snuba), banana boat rides, and more. 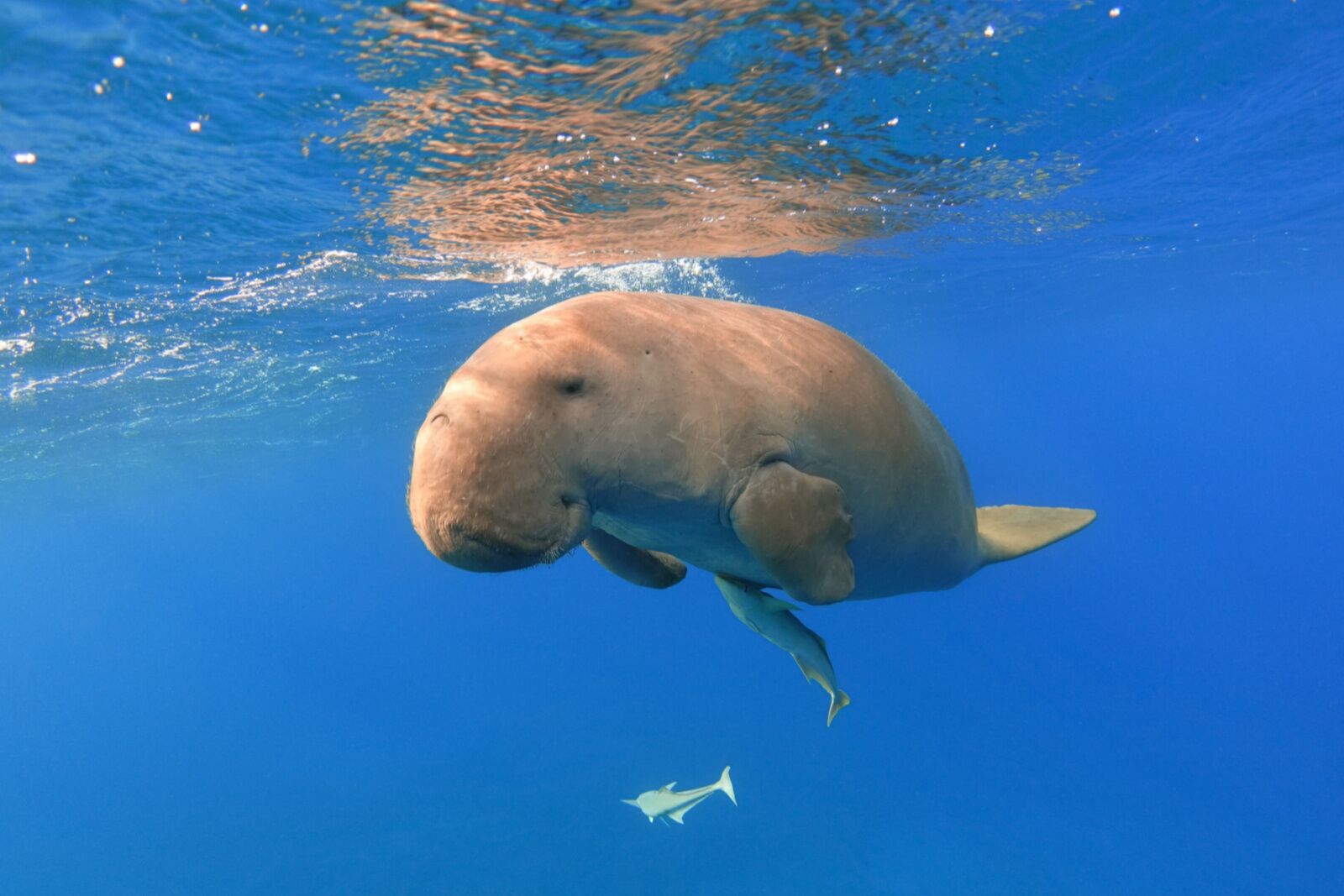 Certified scuba divers (or those wanting to take a class) can choose from several excellent dive shops. Most have storefronts lined up between the jetty and Govind Nagar Beach (Beach Three). DIVEIndia, Andaman Bubbles, and Barefoot Scuba are three of the main shops, any of which go to some of Asia’s best dive sites, such as Jackson’s Bar, Johnny’s Gorge, Dixon’s Pinnacle, and Minerva Ledge.

But for a close encounter with dugongs (the Andamans’ state animal, similar to manatees), nearby Neil Island is the best bet. There are dugongs around the island, but book a trip to a dive site called Dugong Dungeon for the best chance of seeing the gentle, adorable, and endangered mammals. 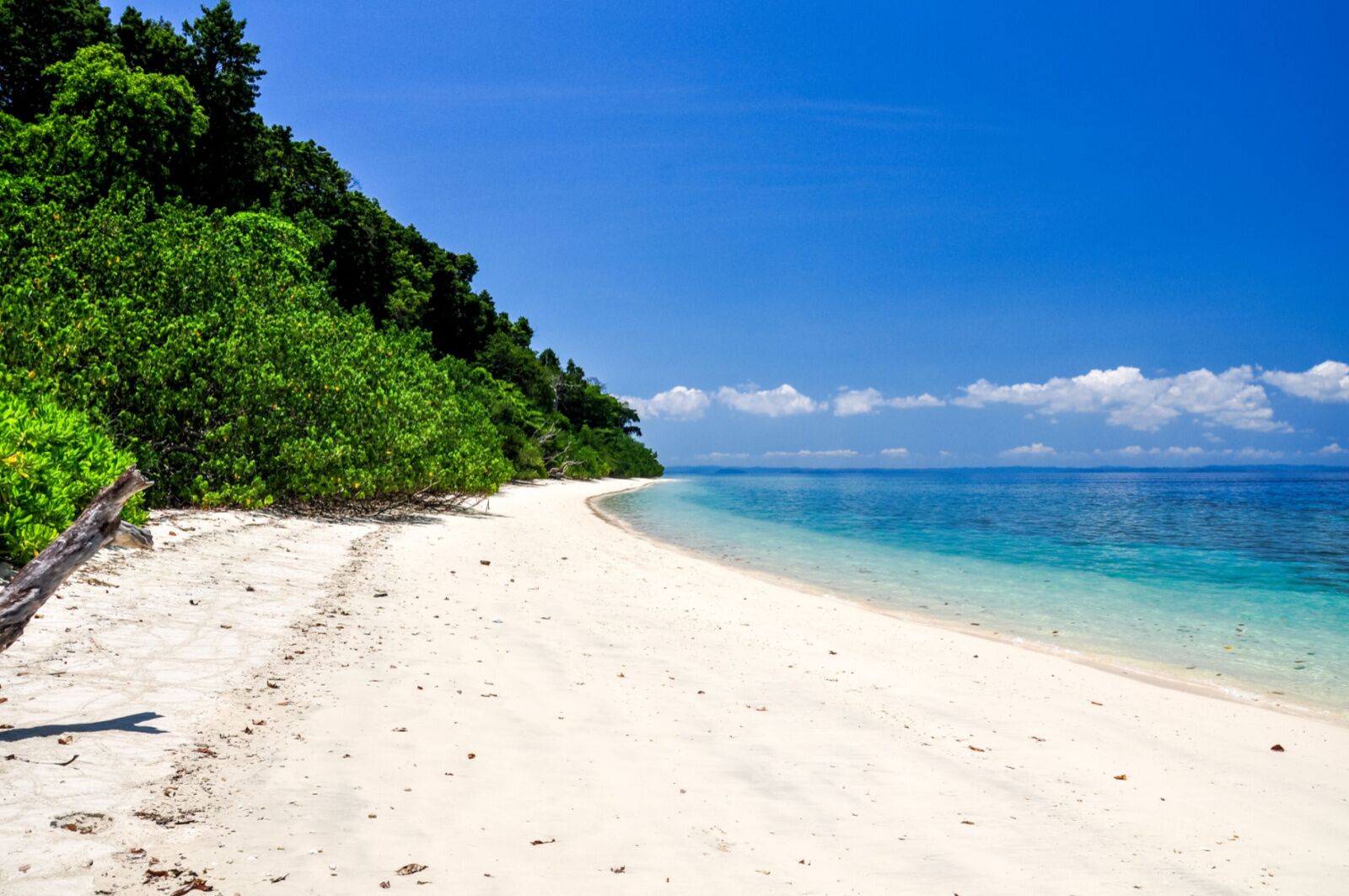 On Elephant Beach, there aren’t any bathing elephants, though there once were — they were originally brought to the island during the period of British rule to aid in logging.

While the only elephants left on the island today are in captivity, visitors can still enjoy the beautiful beach, especially if they reach it via a hiking trail (instead of via boat). The trail is open every day from 8 AM to 1 PM and takes less than an hour, meandering through a tropical evergreen rainforest and marshlands. While most of Havelock Island is covered in thick, untouched vegetation and rice paddies, this walk offers a chance to see the island’s endemic flora and fauna without the need for a guide. 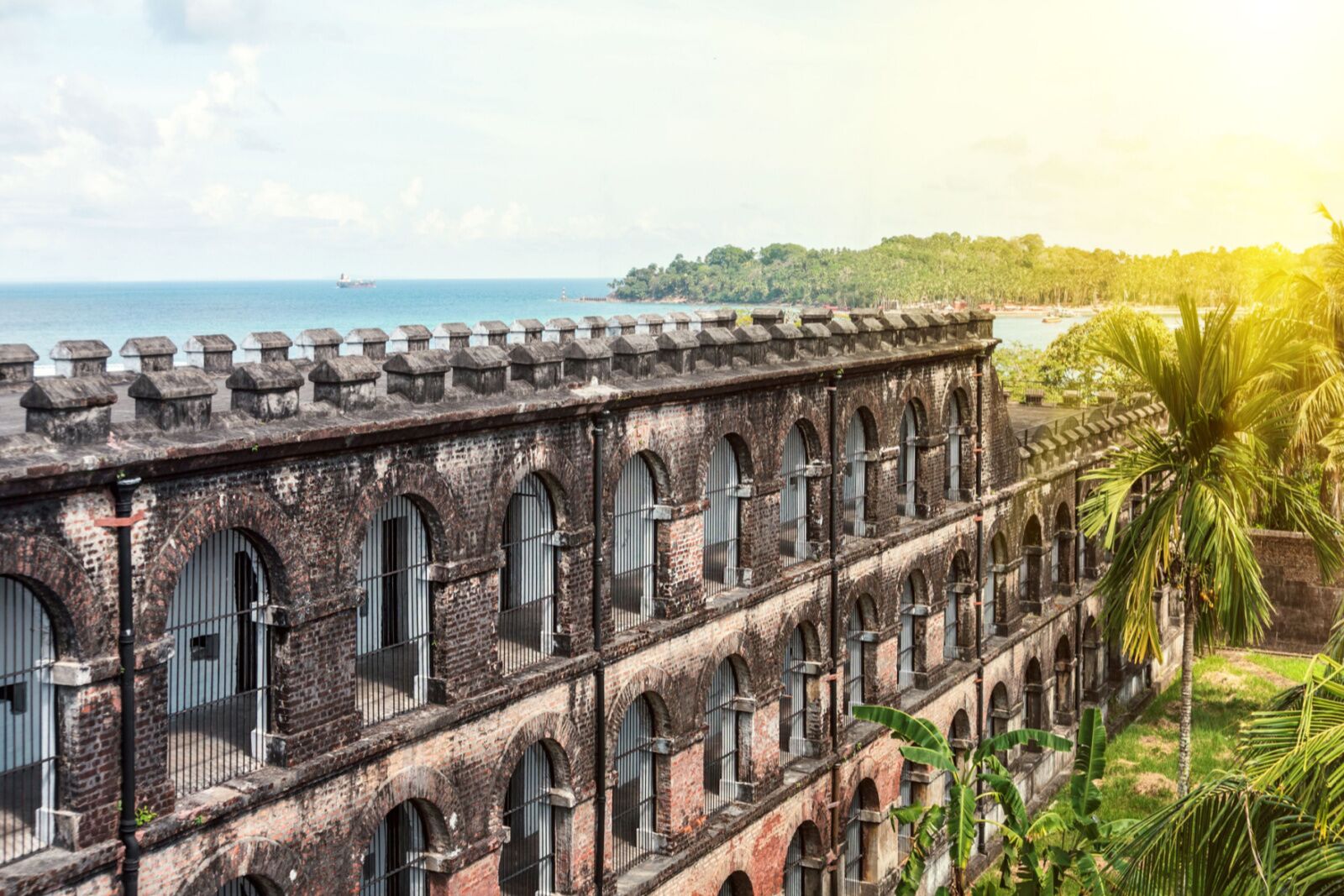 Visitors who have had enough of the lush natural surroundings (if that’s possible) may want to stroll around Govind Nagar. This is the main village and it’s small but vibrant. It doesn’t offer the same historical attractiveness as Port Blair (the capital of the A&N islands), most well-known for its infamous colonial prison. Nonetheless, it’s easy to feel a strong sense of history while interacting with the islanders in Govind Nagar. It’s mostly Bengali refugees who settled in the Andamans in the 1950s-70s, following the 1947 Partition of India.

There’s a tidy market selling anything from fruits and vegetables to agricultural tools, lots of little businesses like shops and supermarkets, and a few ATMs in the main village. And there’s plenty to choose from food-wise, and the aromas that fill the air will guide travelers to any number of choices: the fresh seafood, curries, daal roti, and other traditional foods taste as good as they smell.

The best places to stay on Havelock Island 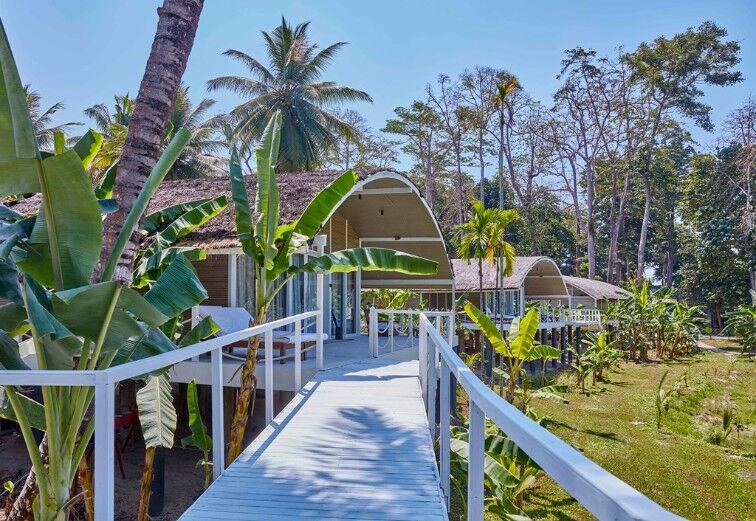 Most hotels are concentrated in the northeast part of the island, not far from the jetty. There are well-established lodging options for various price points, like Seashell Resort and Spa, Sandyy Wavess, and Wild Orchid Resort. There are also new and modern resorts like Tilar Siro Andaman.

From the jetty, it’s only a 20-minute drive to the west coast on one of the two main arteries of the island. On the west coast, travelers can book a room at the five-star, all-inclusive Taj Exotica Resort & Spa Andamans, or escape in the Andaman-inspired, rustic-chic Barefoot at Havelock. Both resorts are at Radhanagar Beach.

To sleep closer to nature while on Havelock Island, check out the De Foret as it’s deep into the rainforest. 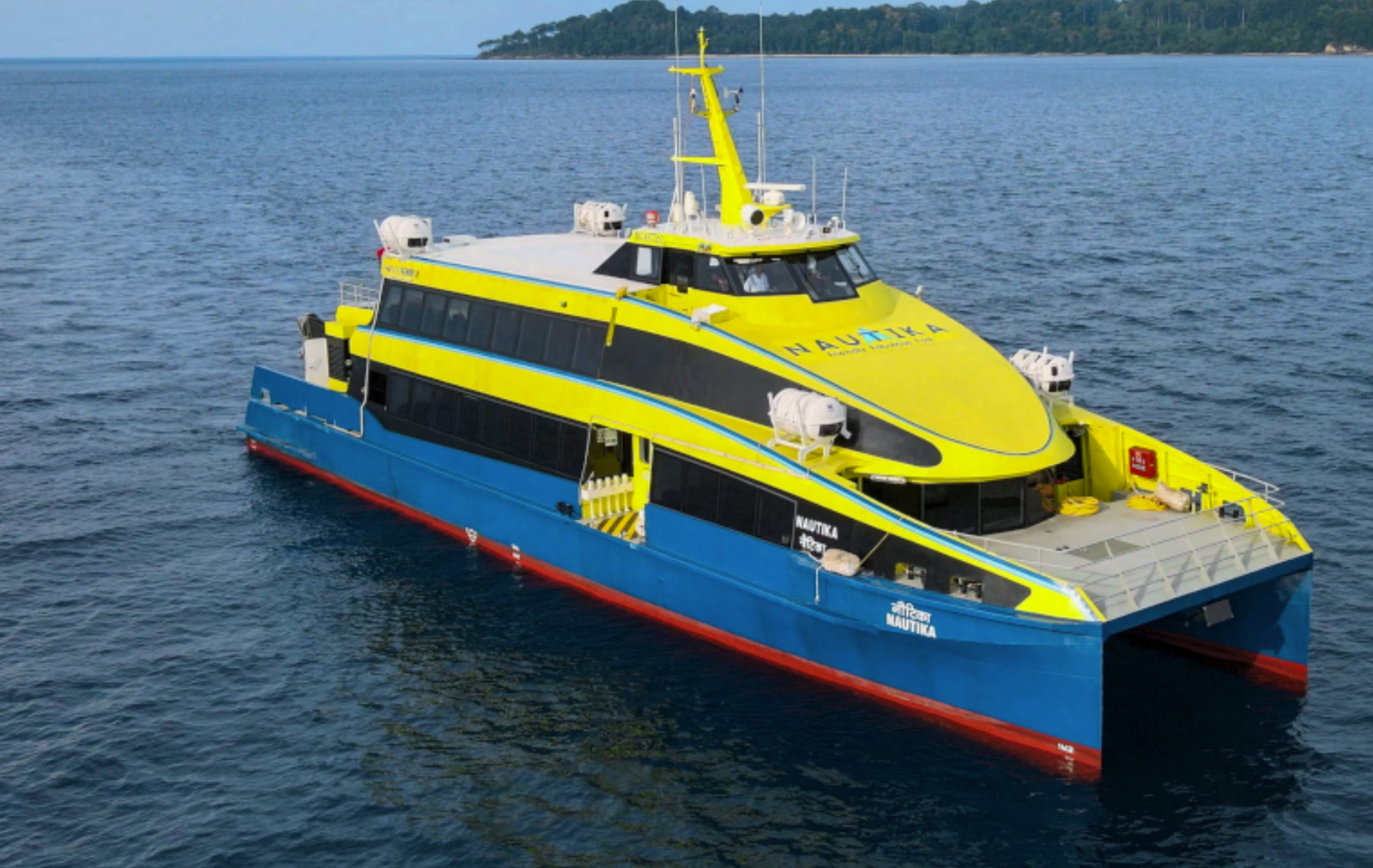 Though Swaraj Dweep is one of the most accessible islands in the South Andamans, it doesn’t mean the journey is easy – quite the opposite, actually. Direct flights to Port Blair are available from a handful of Indian cities only. After landing, most travelers will want to get to their hotels and the beaches as quickly as possible, but it’s a bit difficult: there are only a few ferries with unpredictable time tables, and tickets need to be booked in advance (especially in high season). Contact companies like Makruzz, ITT, Green Ocean, or Nautika to buy a ticket.

Alternatively,  pay a bit extra for a helping hand by booking transportation through hotels or businesses like Experience Andamans.

What makes things a little easier these days is that until at least 31 December 2022, the Restricted Area Permit (R.A.P.) required for non-Indian nationals is lifted for visitors coming from most
countries, including the United States.

Once on Swaraj Dweep, the best way to explore the island is independently, and scooter rentals are only about $6 per day. 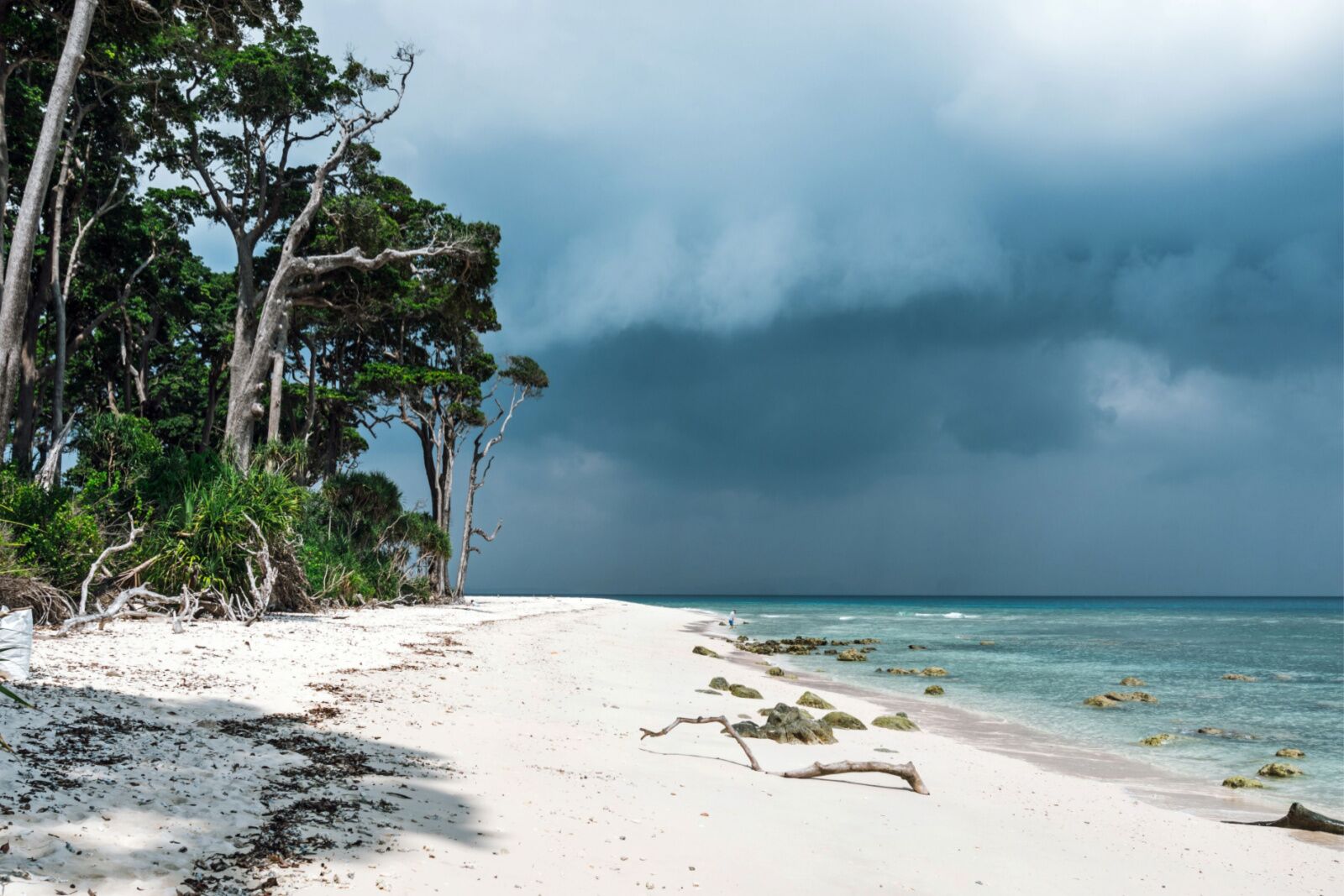 Havelock Island (and all of the Andaman Islands) has a pleasant temperature year-round. But the best time to head to Swaraj Dweep is between December and April, when it’s warm but with less chance of rainfall on any given day as it’s the “dry season.” The busiest time to visit is December through January.

Generally, it’s constantly quite humid on the islands. Avoid the monsoon season, which runs from mid-May to the end of September, as underwater activities may be canceled and ferries might not be able to operate. 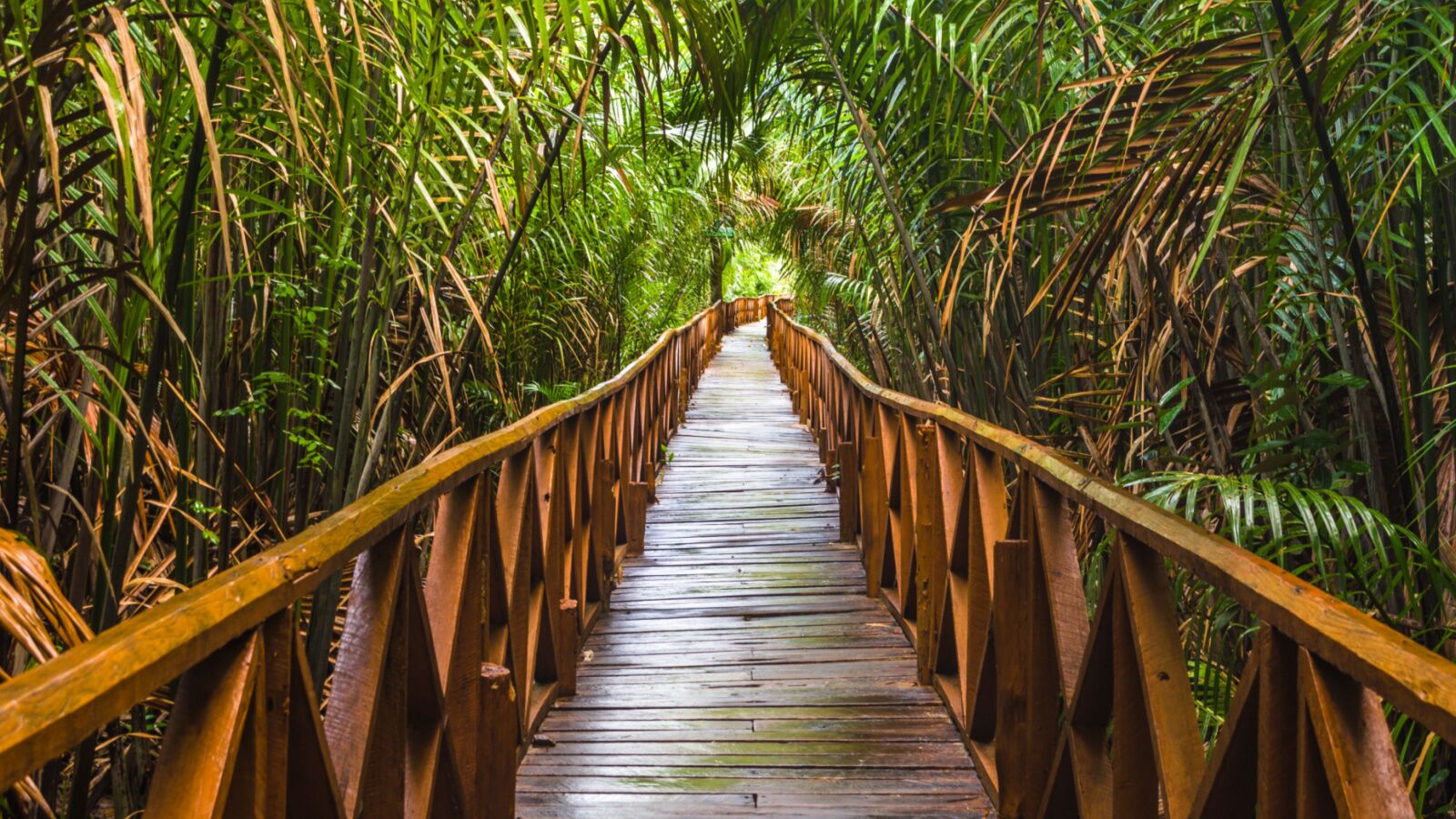 Despite being a bit difficult to reach from Swaraj Dweep – and the fact that some of them deserve a few days of their own – some islands in the Middle and North Andamans are drawing increasingly more attention nowadays as add-on stops to Havelock Island vacations. Specifically, the areas around Rangat (on Middle Andaman Island) and Diglipur (on North Andaman Island) have become rather popular.

Besides beaches, Rangat is well-known for the Dhani Nallah Mangrove Walkway, a short boardwalk trail that leads to a stunning beach. It’s popular for birdwatching and observing sea turtles. On Diglipur, Alfred Caves and Saddle Peak National Park are the main draws. Between the two destinations, travelers can visit a cluster of 41 limestone caves inhabited by swiftlets or hike to the highest peak of Andaman. There’s a lot to fill a few days on the island. 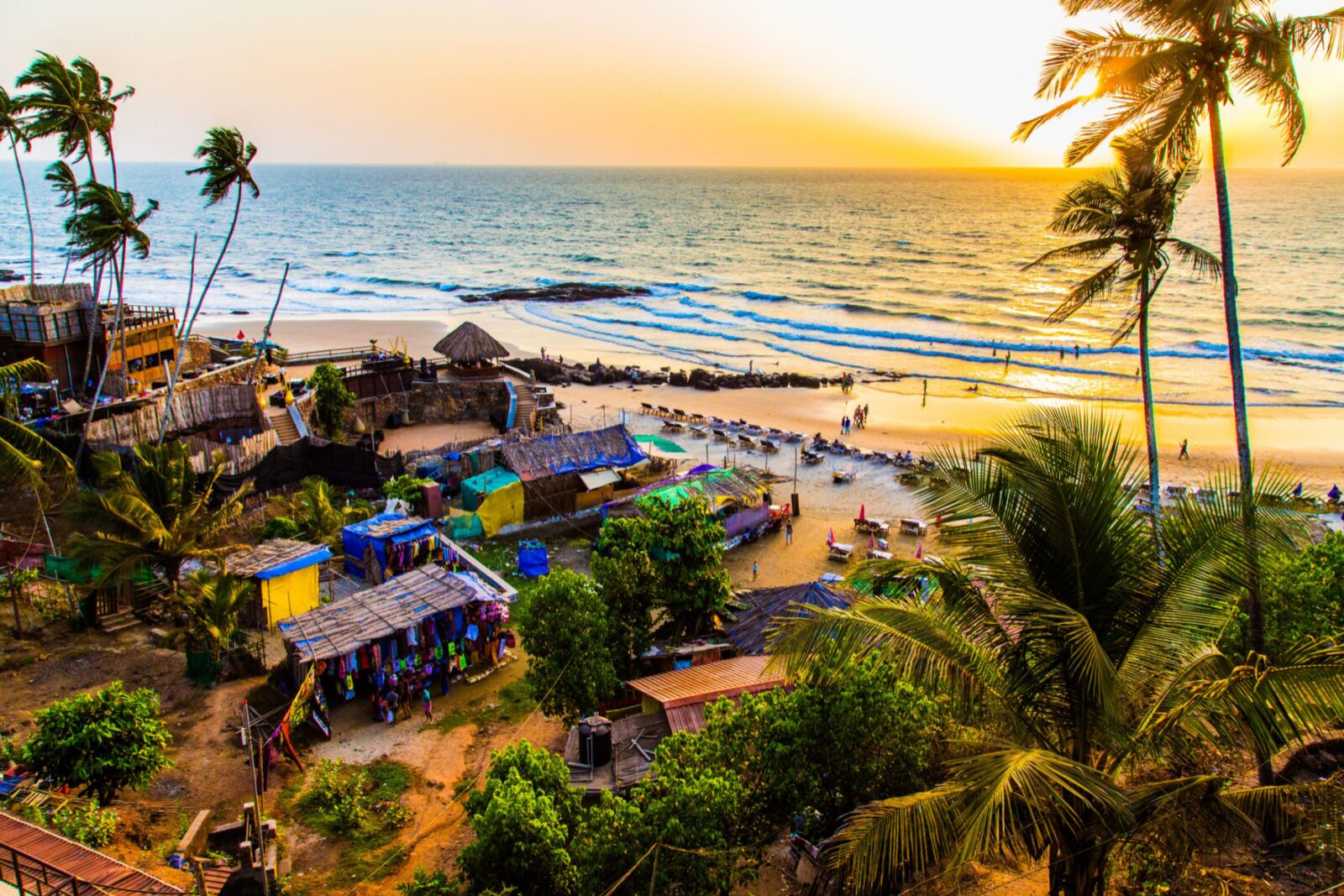 Goa is undoubtedly India’s most well-known beach destination, and such popularity comes with crowds – crowds craving the tropical nightlife in North Goa or crowds seeking relaxation and wellness in South Goa. So it’s fair to say Swaraj Dweep is the opposite. It’s one of India’s best-kept secrets, as evidenced by the fact that Goa has nearly 14 times as many tourists as the Andaman and Nicobar Islands.

While South Goa also has unspoiled beauty (in places like Talpona Beach, for example), Swaraj Dweep is a stronger contender for travelers who the prioritize laid-back beach life and the underwater world, and generally more peaceful, tranquil vacation. It’s not only geographically far removed from India, but at points, its scenery looks more like Maldives than mainland India. It makes for the perfect grand finale to a metropolitan, cultural, or spiritual Indian vacation.

TravelThe Best Place To Go in India for Every Type of Traveler
Tagged
Beaches and Islands Outdoor India
What did you think of this story?
Meh
Good
Awesome