Illinois is so much more than the Windy City. The state offers forests, beaches, stunning cliff faces, and a surprising amount of waterfalls that may make you think you’re in Oregon, not the midwest. But fortunately, you don’t have to travel too far from the Windy City (which itself has some lovely hikes) to experience them.

The best Illinois state parks highlight the diversity of the state, ranging from remote wooded areas to sections of urban bliss with great restaurants just steps away. If you’re a photographer — and that includes photographers who exclusively shoot on smartphones — you’ll find no shortage of inspirational vistas. And it’s not just the scenery that’s hard to resist. Cute cabin rentals are available at some of the best Illinois state parks below, as are scenic places to pitch a tent and seriously high vertical climbs for hikers who want to challenge their leg muscles.

Below, you’ll find 14 of the best state parks in Illinois, though don’t let this list limit you: the Illinois Department of Natural Resources manages more than 300 sites across the state — plenty to fill a few long weekends. 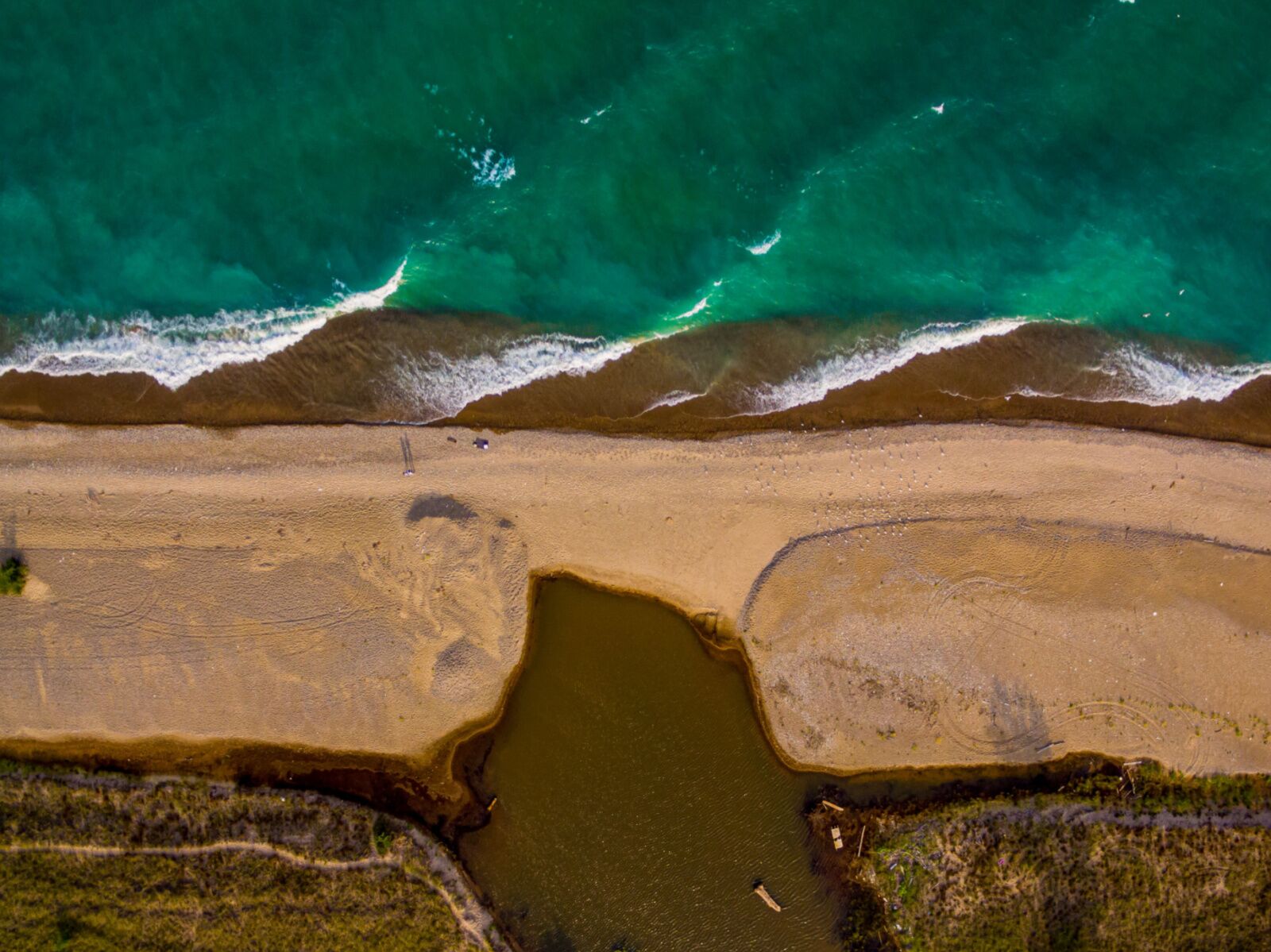 If you want to hit the beach in Illinois, you don’t have too many options of where to go. In fact, Illinois Beach State Park (officially called Adeline Jay Geo-Karis Illinois Beach State Park) is the only beachfront remaining in Illinois. Fortunately, the park is huge, covering more than 4,000 acres, and the reservable campsites ensure you can wake up at the beach without the long flight to California. 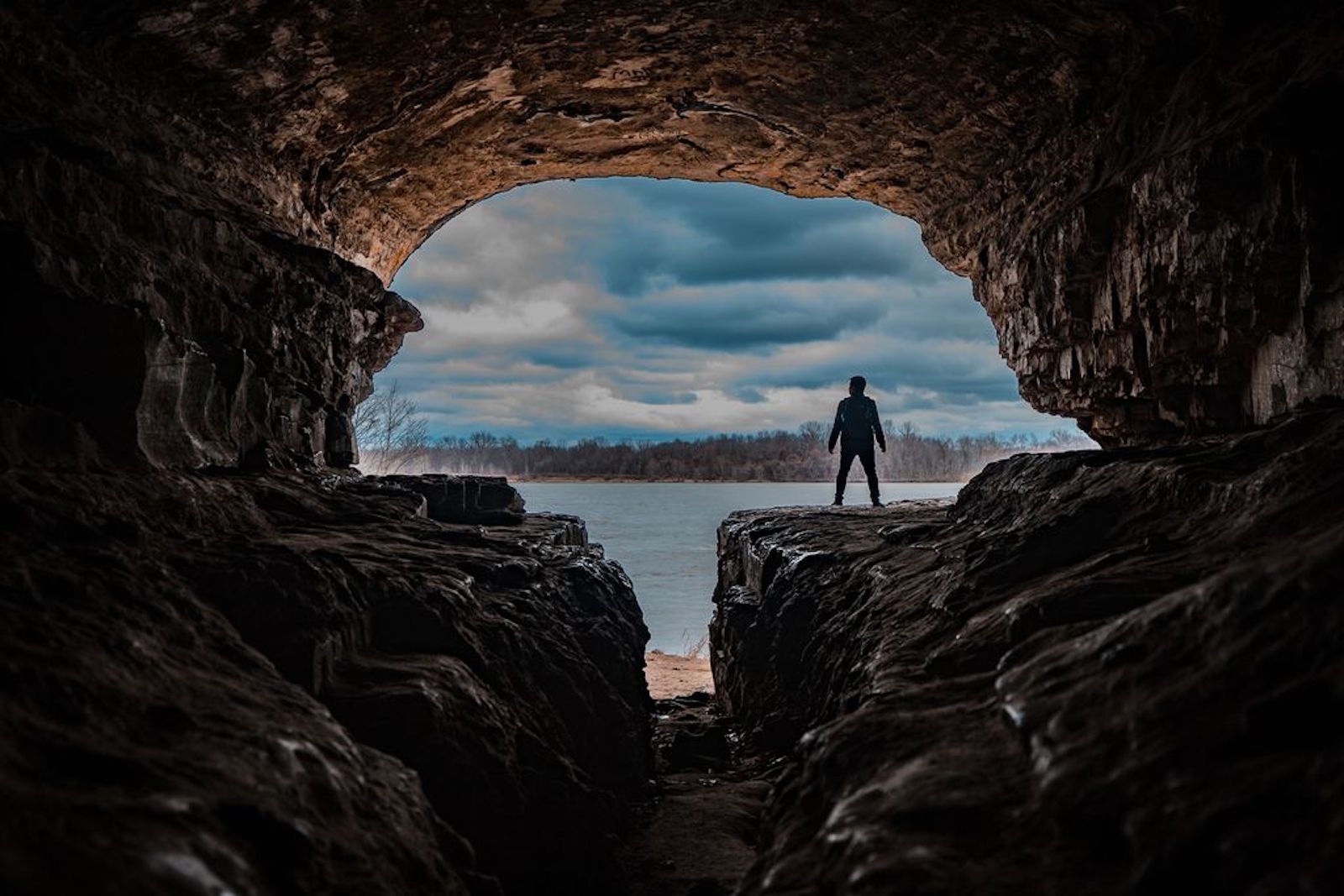 Cave-in-Rock State Park, within the Shawnee National Forest, has high bluffs overlooking the Ohio River. There’s beginner fishing and boating in the small pond and the 55-foot-wide cave, which was naturally carved out of the limestone rock by the water, is a must-see. This is a great park as it’s mostly wooded and feels remote, but actually is home to a nice resort: the Cave-In-Rock Restaurant and Lodge. You can book a room at the lodge or just swing by for dinner after hiking the park’s two trails (one easier, one harder). 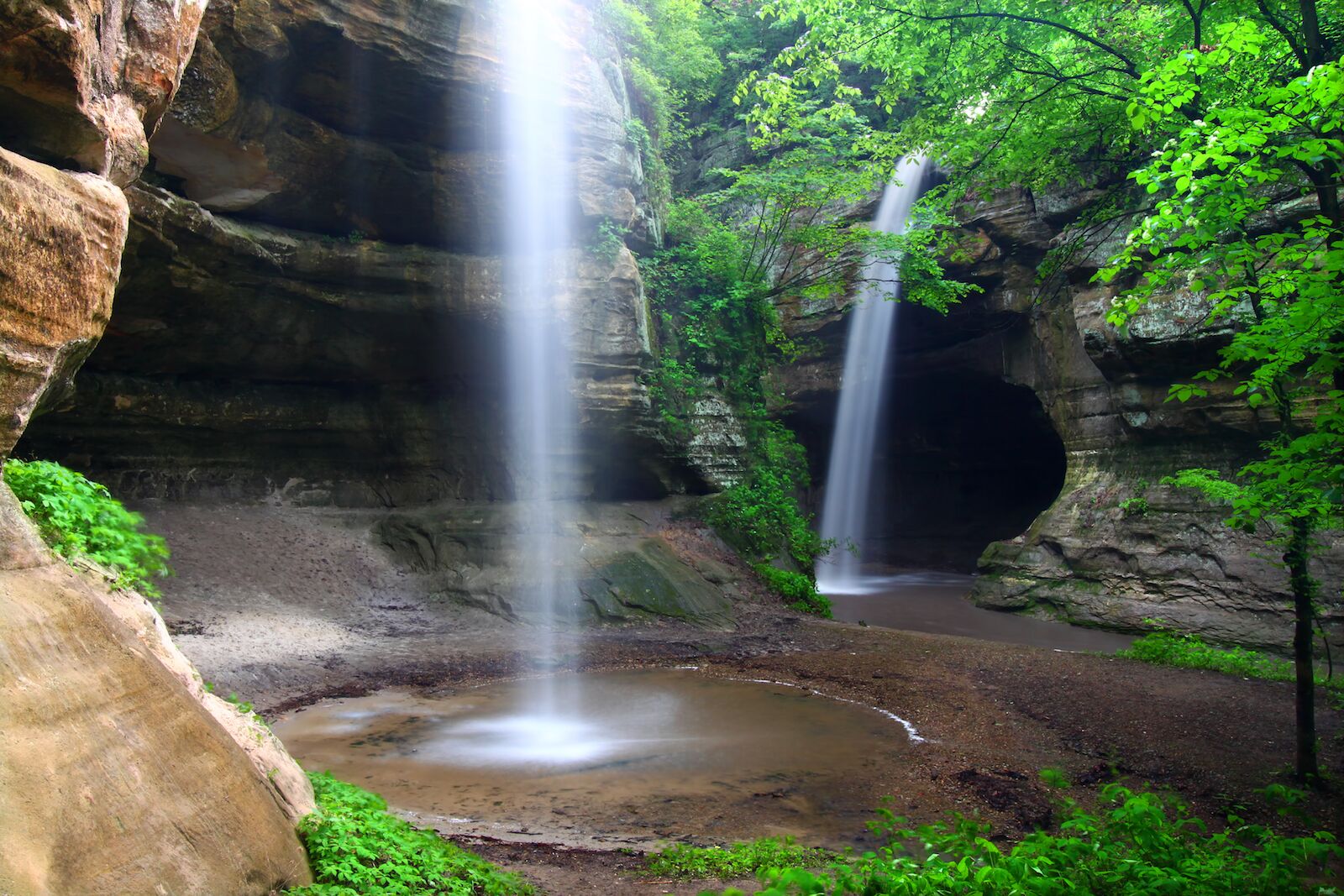 Starved Rock is not only one of the best Illinois state parks, but likely one of the best in the entire Midwest. There are 13 miles of trails that pass spectacular waterfalls and canyons throughout the park, and come winter, it’s an excellent spot for ice fishing or snowy photography. You can stay at the historic Starved Rock Lodge or reserve a campsite in advance. Though there’s enough hiking to keep you busy for a day or two, you may also want to make plans for a guided kayak tour, too. 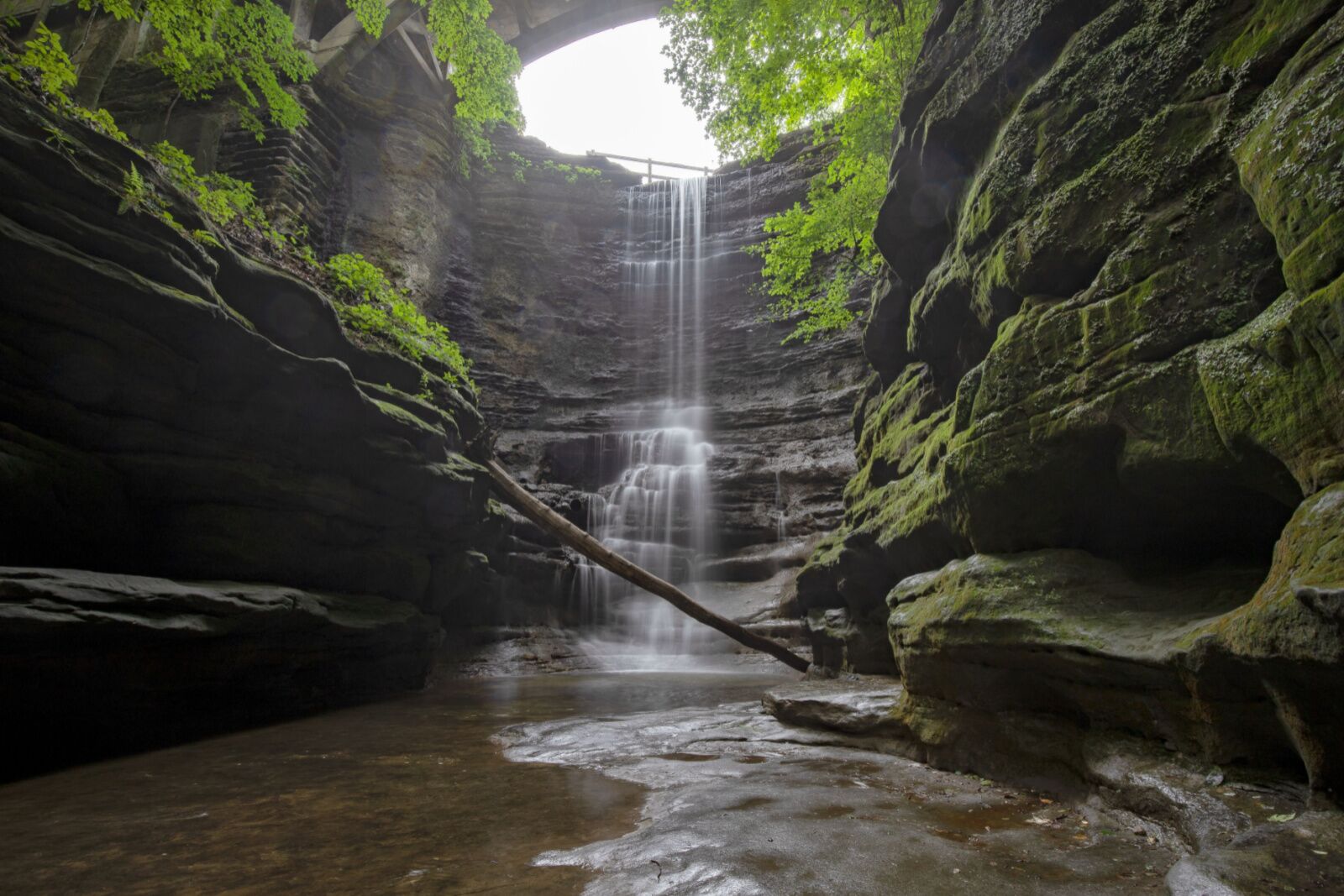 Swimming holes, waterfalls, canyons, lush vegetation, dense foliage, wildlife, mountain biking, hiking — you name it, you’ll find it at Matthiessen State Park. Perhaps not surprisingly, this Illinois state park is just a few miles away from Starved Rock State Park, which has a very similar setting. The two parks combined make a great weekend trip, especially in the fall when horseback riding through this park is especially beautiful. 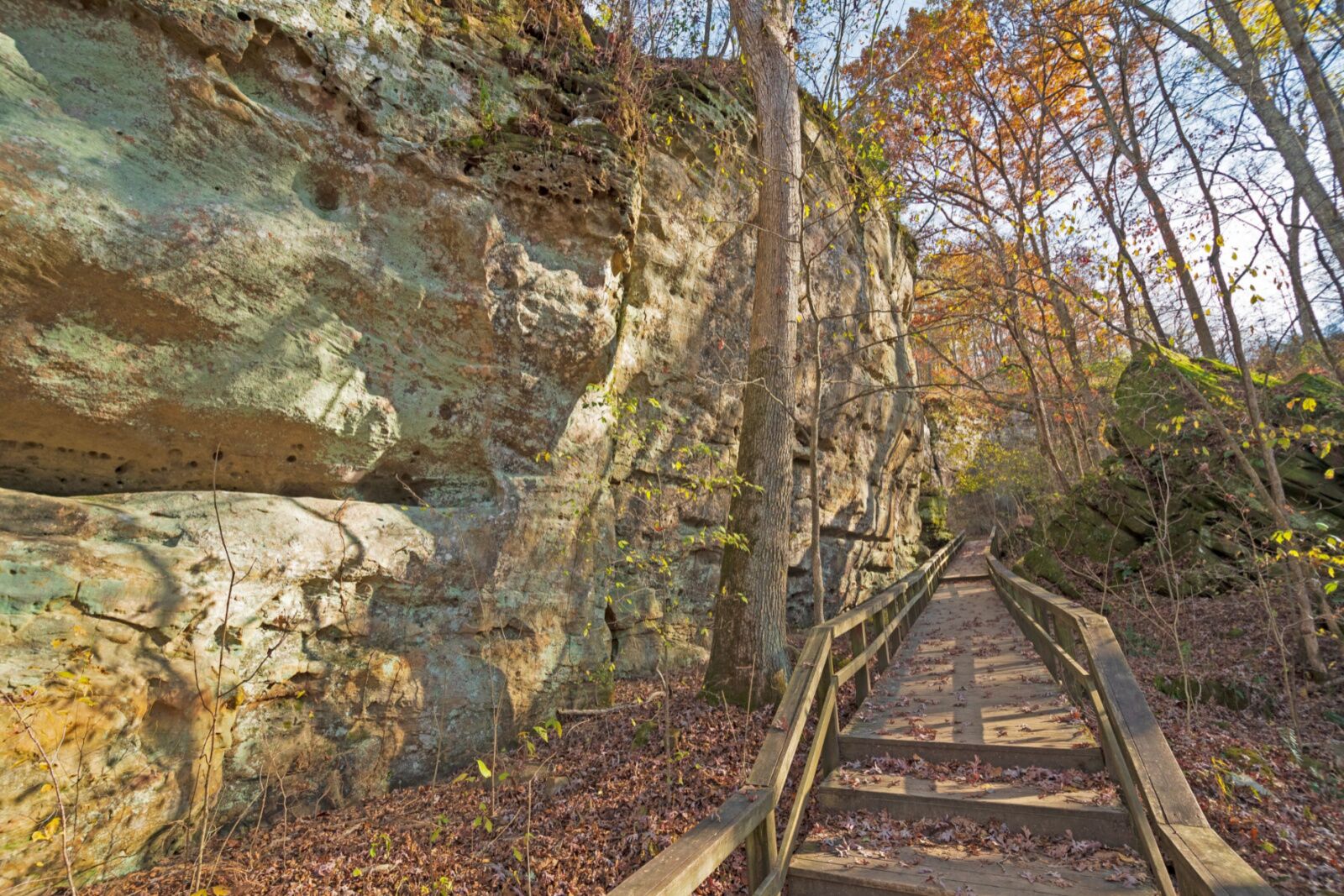 One of the best Illinois state parks for climbers, Giant City is on a scale you’ve likely never seen. It was named for the massive rock features, cliffs, and canyons, which have enormous indentations and caverns that make it look like a giant came walking through. There’s a short movie in the visitors center that speaks to the history of the land, which is part of Shawnee National Forest.

Visitors will likely also want to climb to the observation deck for an aerial view of the park and explore some of the trails; the 12-mile Red Cedar Hiking Trail is the most challenging. Climbers should bring all their own gear and head to Devil’s Standtable for climbing and bouldering routes. 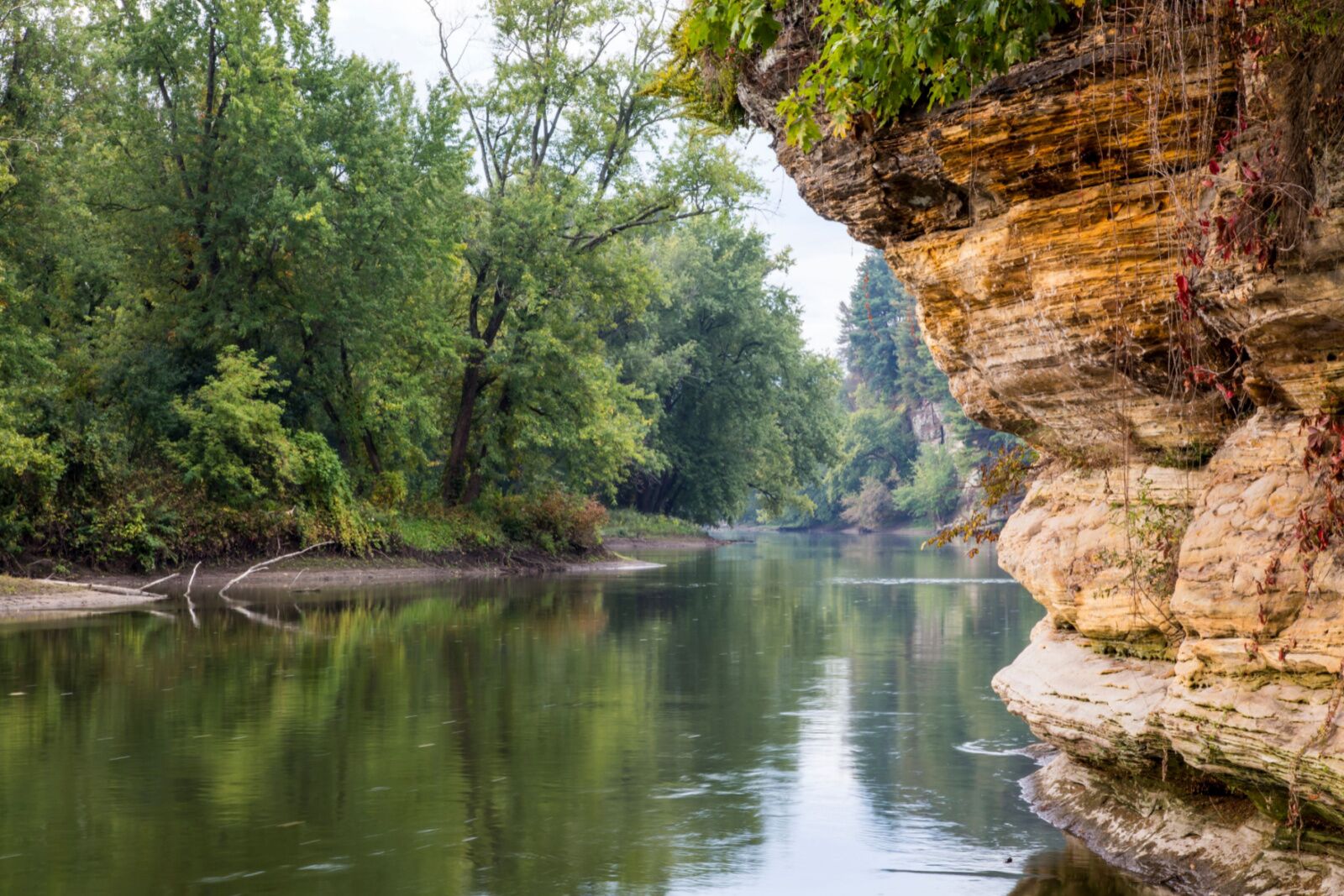 You may know the name Castle Rock from the Stephen King stories set in a town of the same name, but Illinois’ Castle Rock is far more appealing. It’s only 2,000 acres, but the fact that it’s one of the least-crowded Illinois state parks and has a boardwalk trail running along the river makes it a wonderful place to stretch your legs on a sunny day. Guests can also kayak on the Rock River, a relatively easy paddle for beginners. 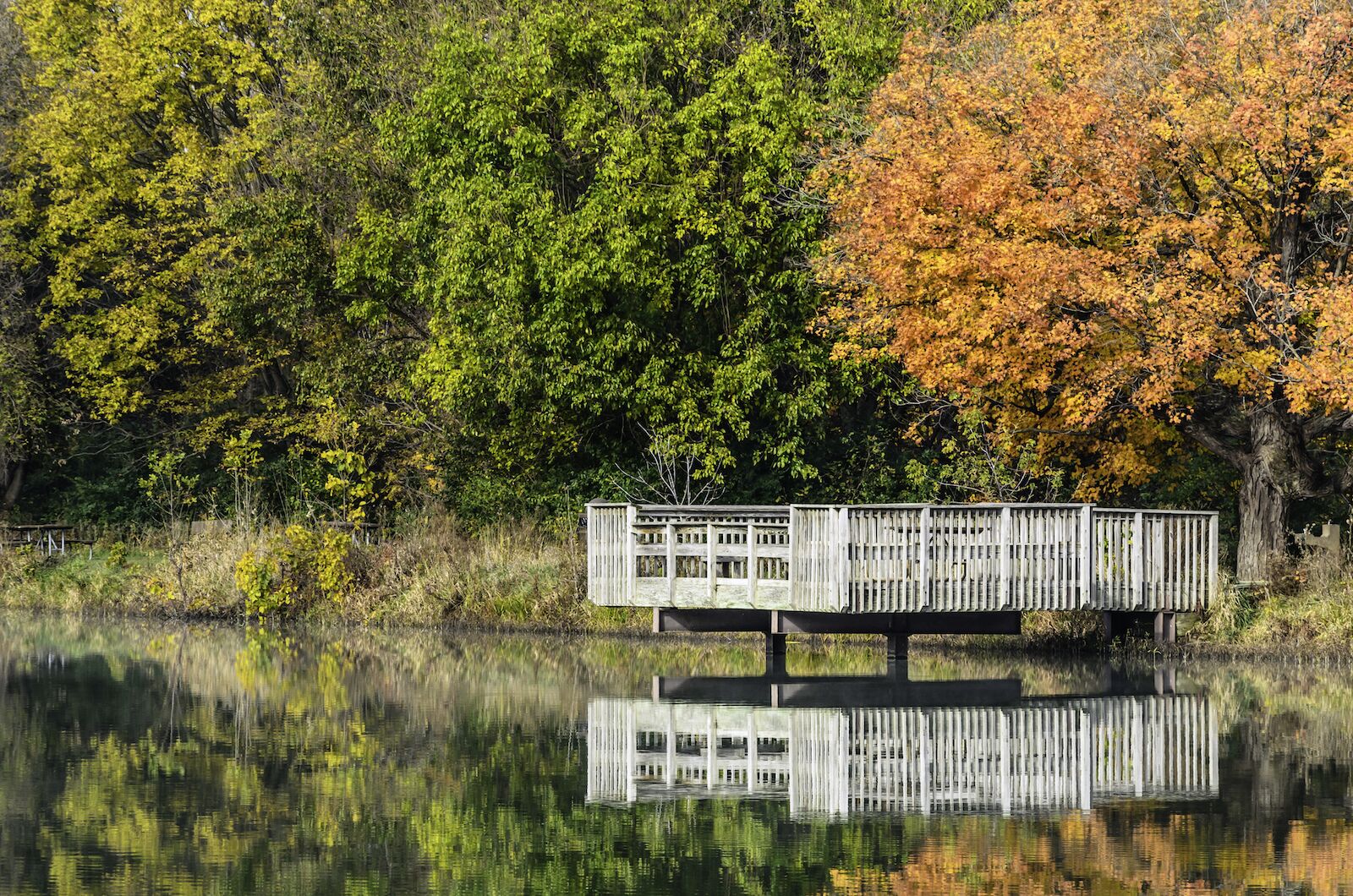 In the northwestern part of the state, Silver Spring State Park is named for exactly what you’d think: a natural spring. The area around the spring became a state park in the 1960s and is now a popular spot for birdwatching, fishing, and plant photography, since there are several ecosystems within in the park. It’s the best Illinois state park in the area for a winter visit if snowshoeing is your thing, though the archery range is pretty fun, too. 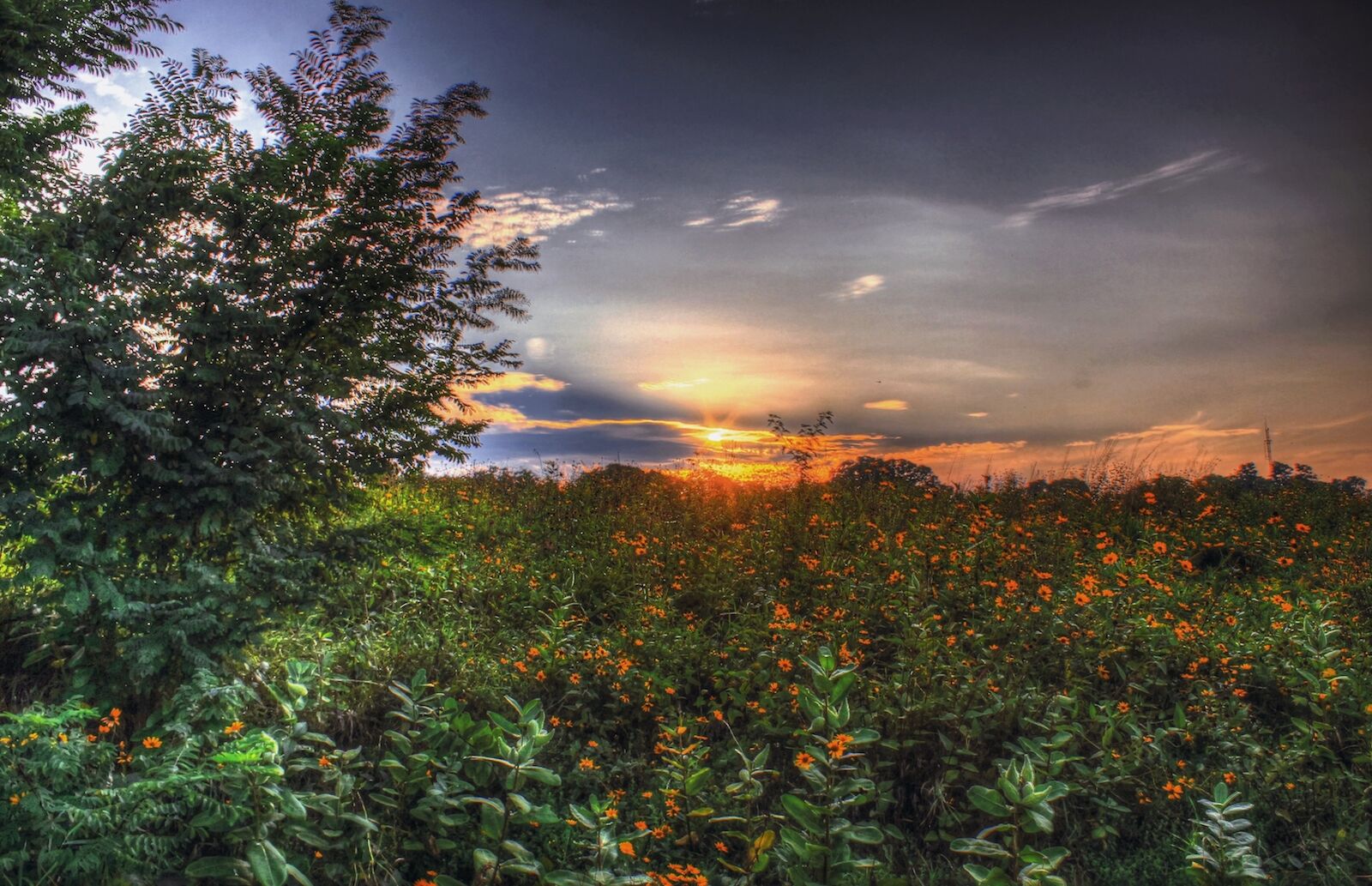 Chain O’Lakes State Park is quite close to the border with Wisconsin and doesn’t leave much of a mystery as to what to expect. It’s one of the top Illinois state parks for paddling and fishing. It’s smack in the middle of the part of the state with the most lakes per square mile. It has 6,500 acres of water and nearly 500 miles of shoreline, plus several trail systems for hiking, cycling, and horseback riding. It’s about an hour and 15 minutes from Chicago, so it’s a great day trip if you want to swap the skyline for a ridgeline for a few hours. 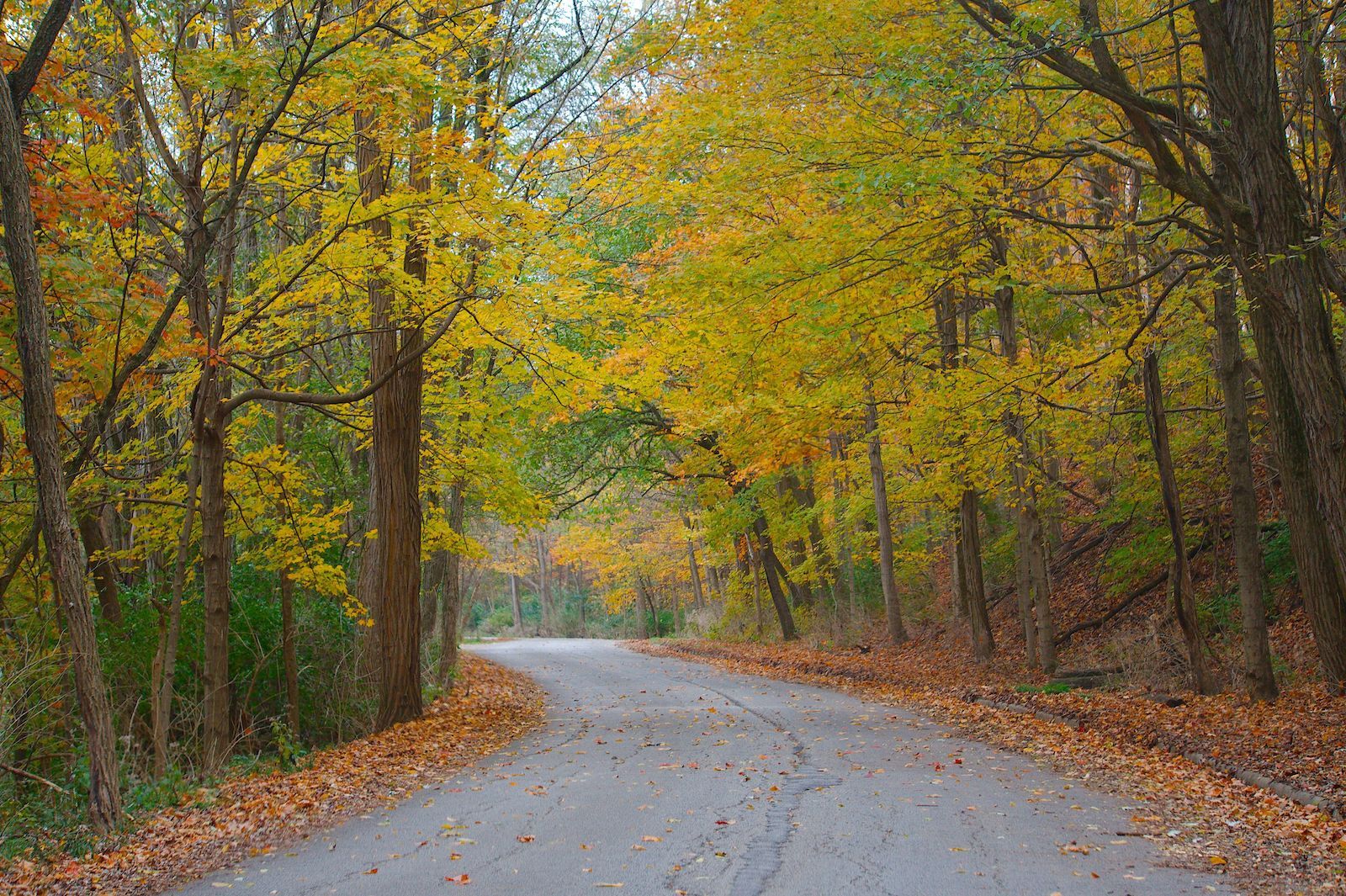 At the site of a former surface mining operation, Kickapoo State Park offers a lot more than scenic exploration. The park’s 2,842 acres include crystal clear water in some of its 22 ponds and lakes, which allow for the usual activities like fishing and boating as well as snorkeling and scuba diving. If you’re doing the latter, head to Inland Sea or Sportsman’s Lake, both of which are deep enough for a serious dive. 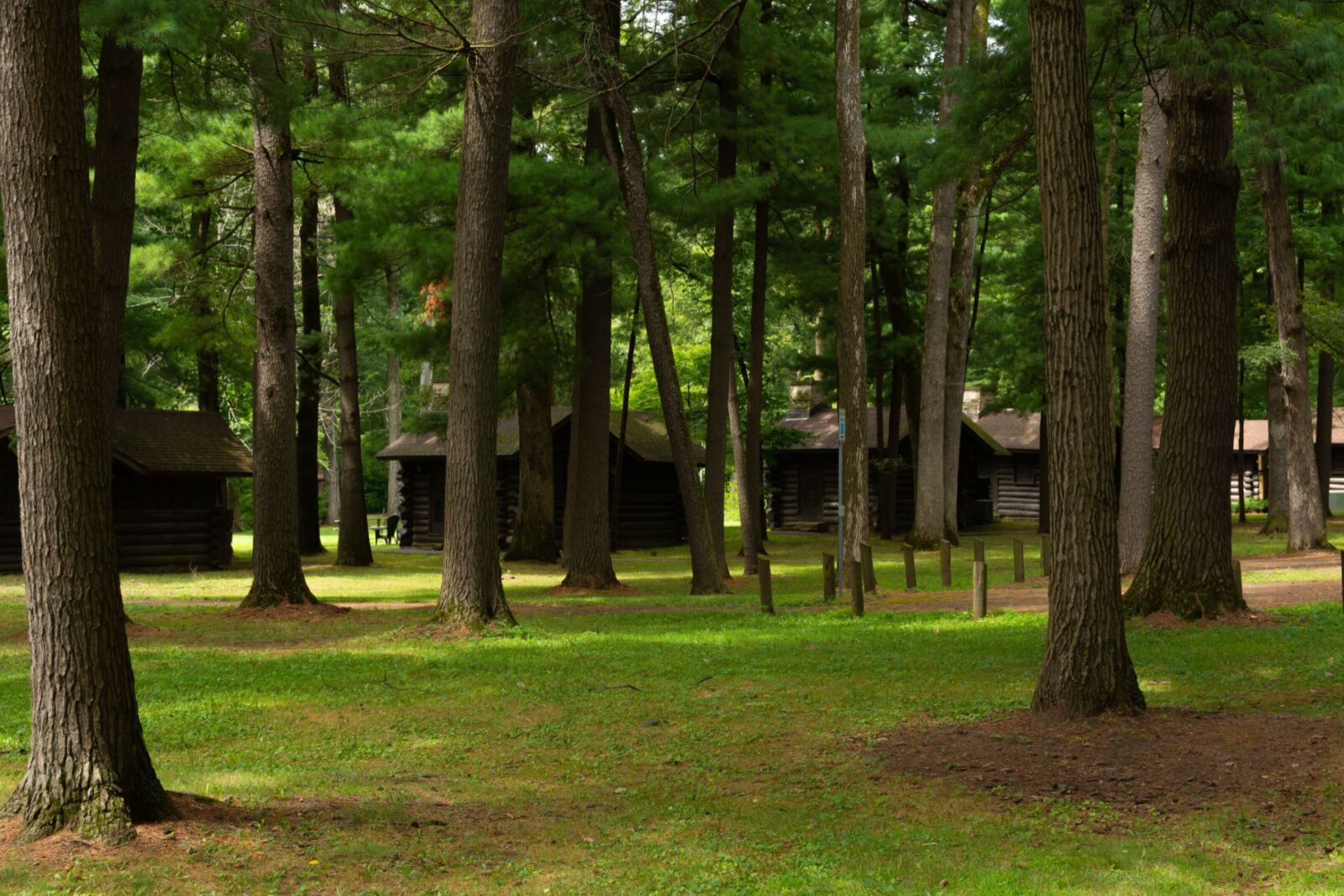 For a stay in a quintessential Illinois log cabin that would make Honest Abe himself feel right at home, head to White Pines Forest State Park. It’s one of the best Illinois state parks for a group of mixed travelers as some people can stay in the cabins while others pitch a tent nearby.  It’s just under 400 acres so it’s not huge, but it’s less than two hours from Chicago and has extremely tall trees that look like they belong in the Sierra Nevada, not Illinois. 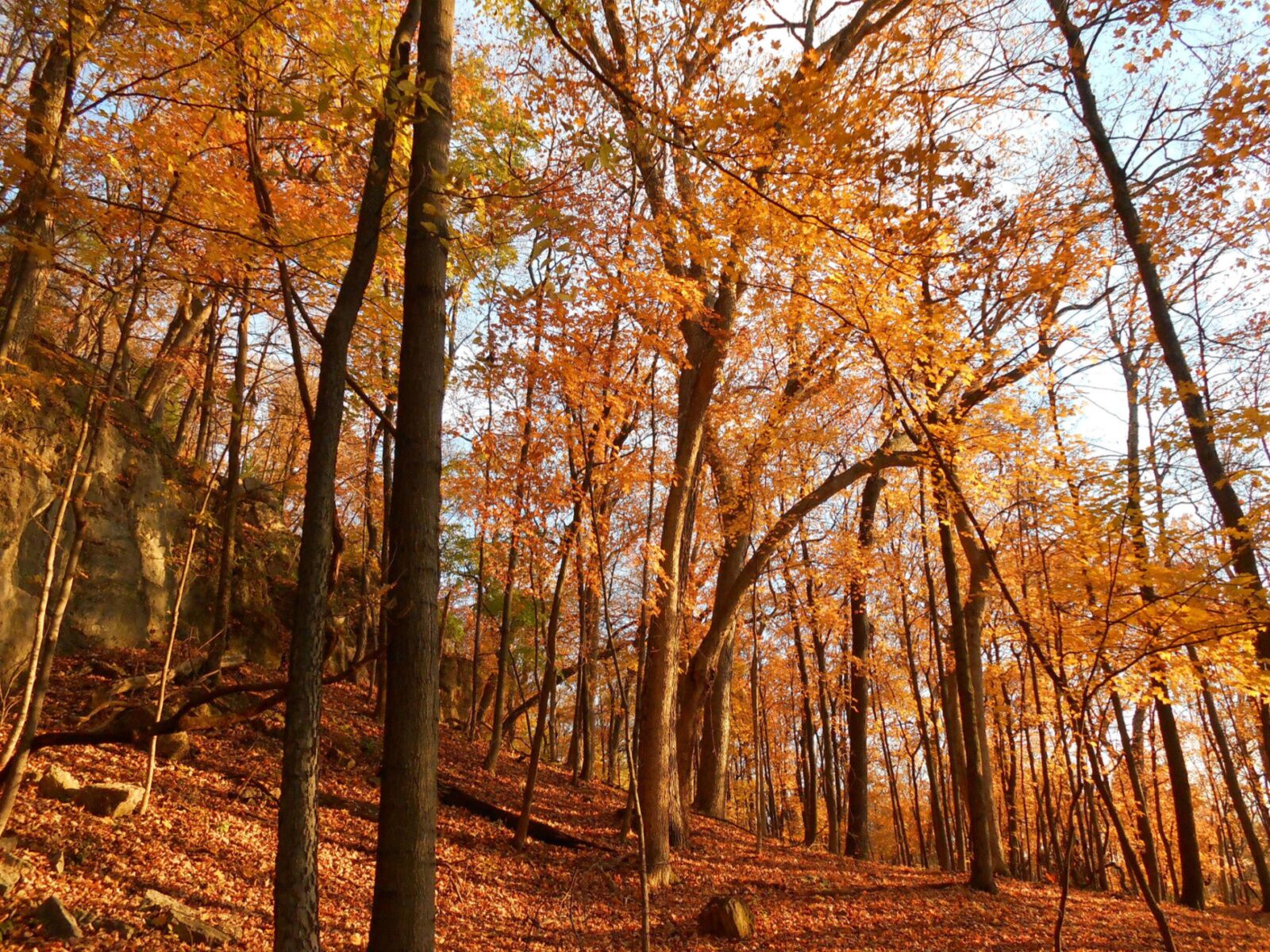 Pere Marquette State Park cover thousands of acres of bluffs and wildlife along the Illinois River. Biking and hiking trails lead through the park, and several interpretive trails tell the human and geological history of the park. The Lodge at overlooks the river and has an indoor pool, restaurant, and even a winery, making it surprisingly luxurious. Remember that the park has 12 miles of dedicated hiking trails, which means you’ll need to make sure you don’t accidentally venture onto them if you’re biking or horseback riding. 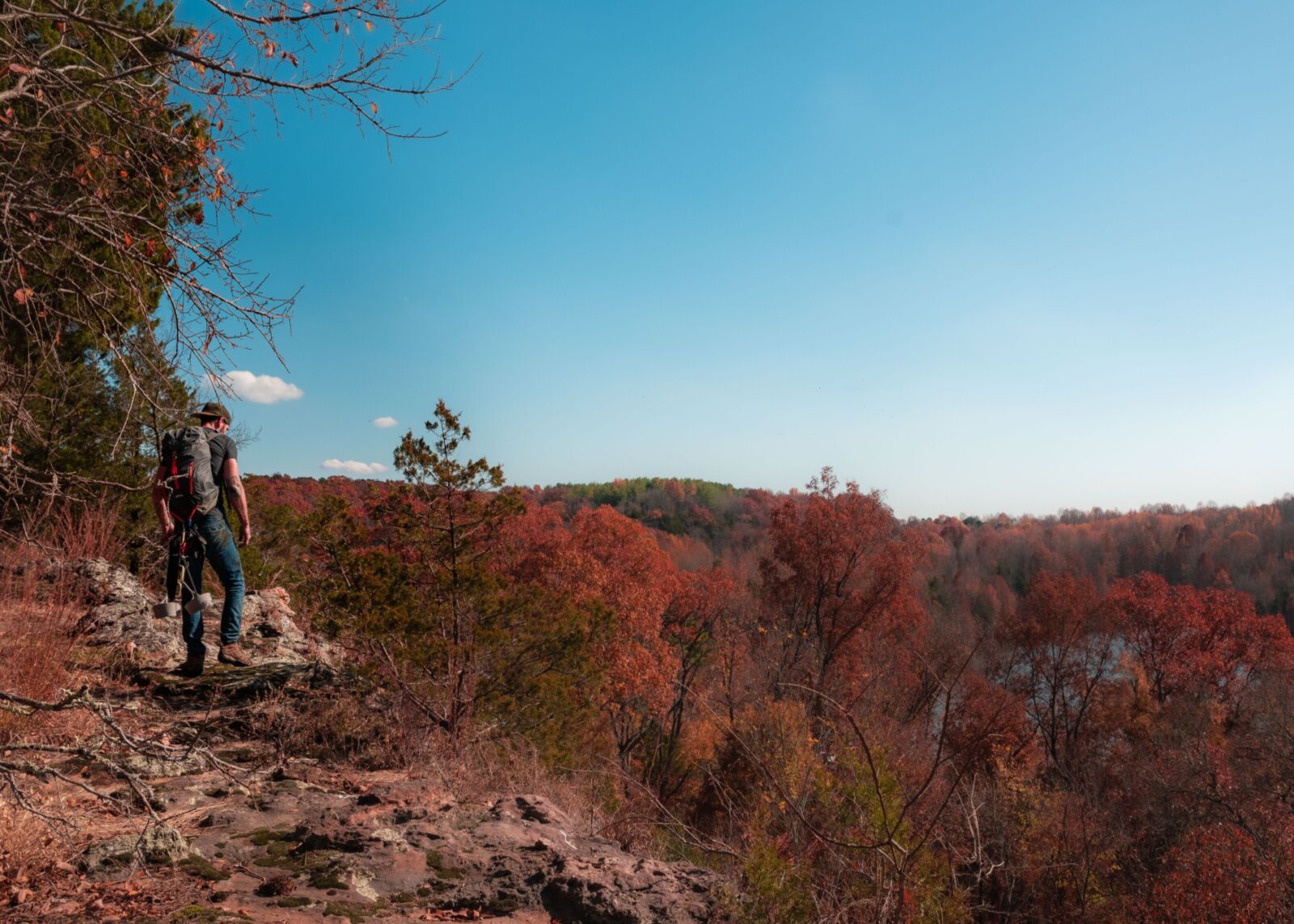 Fern displays, rocky bluffs, picturesque woods, and geological features make Fern Clyffe State Park a popular hiking area. Don’t miss the 150-foot Hawks Cave and the Big Rocky Hollow Trail, highlighted with a 100-foot-tall waterfall. The scenery is most spectacular in the fall as many of the valleys below the hiking routes have lovely foliage, but it’s a great stop any time of year if you want to get in some uphill action. 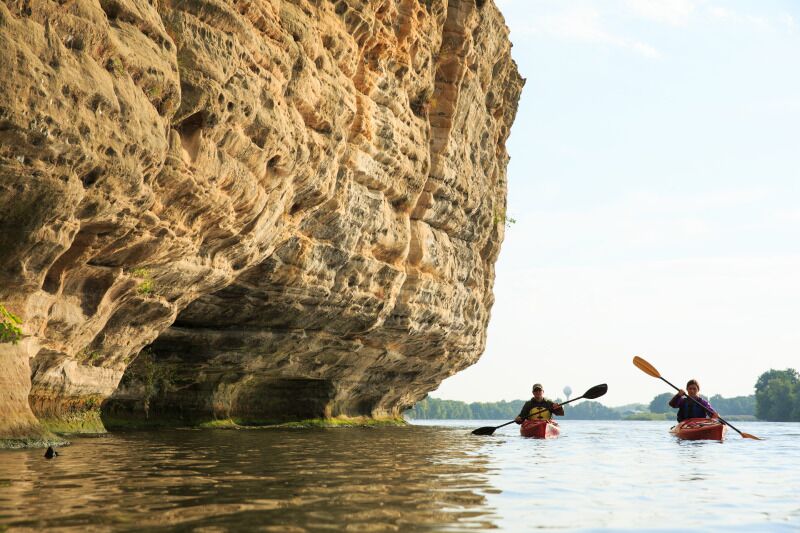 Buffalo Rock State Park was once an island in the Illinois River. The 98-acre park has three American bison: Pebbles, Cocoa, and Hope. If you can tear yourself away from the surprisingly cute bison, also check out the “Effigy Tumuli:” a section of the park with massive ground art installations inspired by the Indigenous Americans who live in the area. 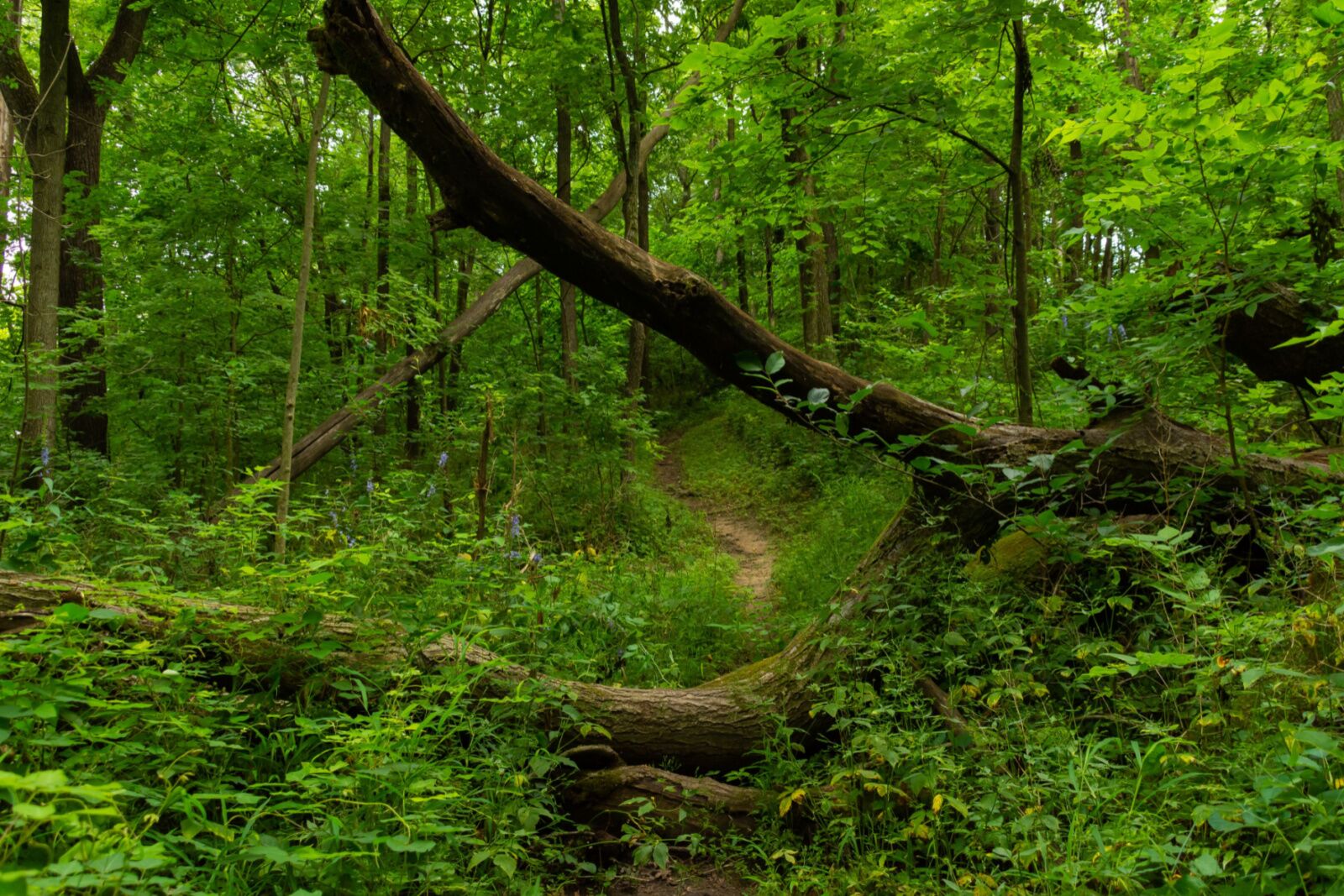 Mississippi Palisades has 2,500 acres of caves, bluffs, sink holes, and rock formations along the Mississippi and Apple rivers. It’s a good park for bird watchers, with woodpeckers in the spring and fall, and eagles in the winter. If you’re headed there to find feathered friends, you may want to read up on the best birdwatching spots within the Illinois state parks system. Audubon has a good guide.

How many Illinois state parks are there? 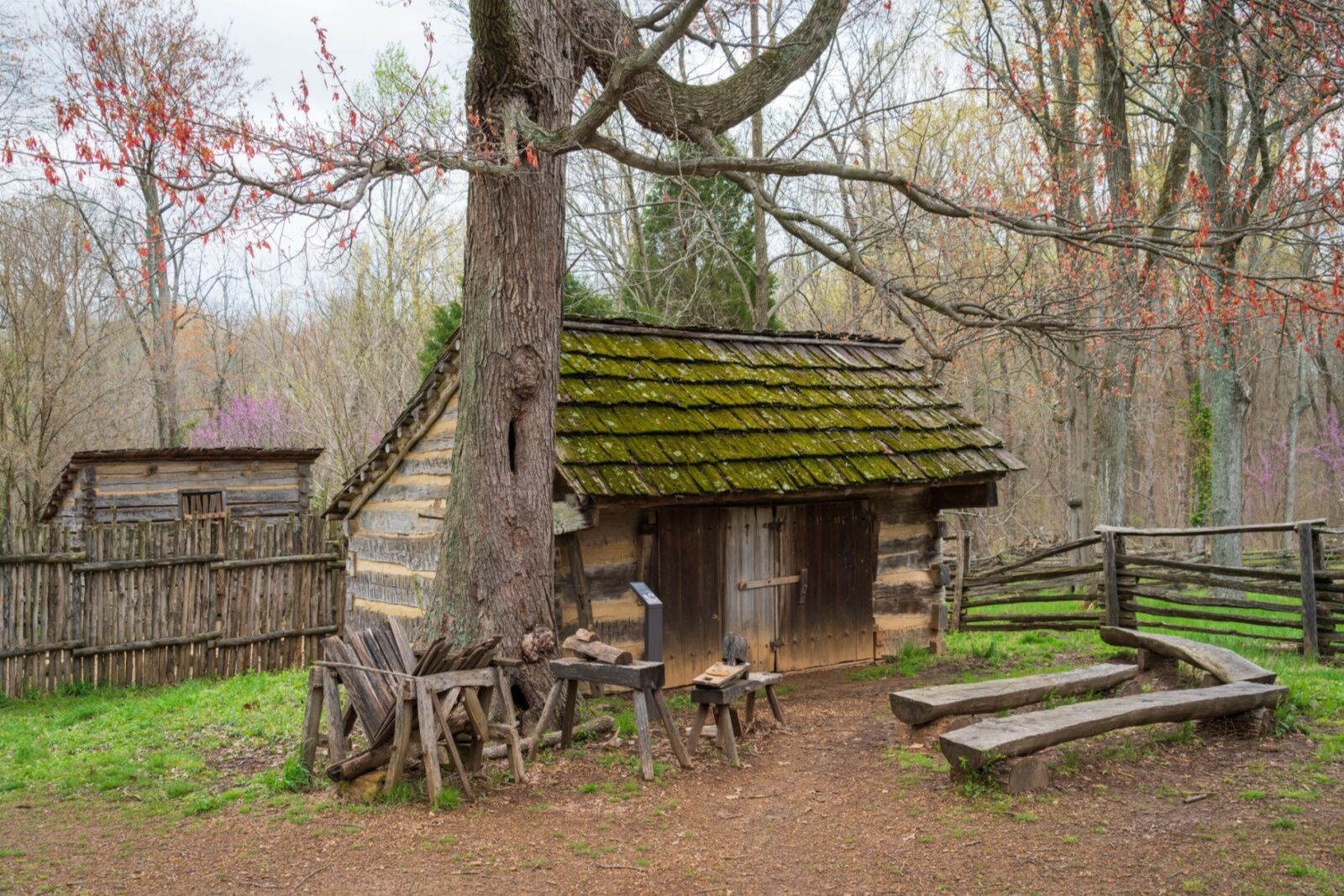 Illinois has a fairly impressive 69 state parks. But if you take into account all the other land managed by the Illinois Department of Natural Resources, like recreation sites, wildlife refuges and historic sites, it totals 309 independent sites. That’s a total of around 475,000 square acres preserved and protected by the state, so there are plenty of places to go to spend a weekend away from the crowds of the state’s more well-known attractions.

What is the most popular state park in Illinois? 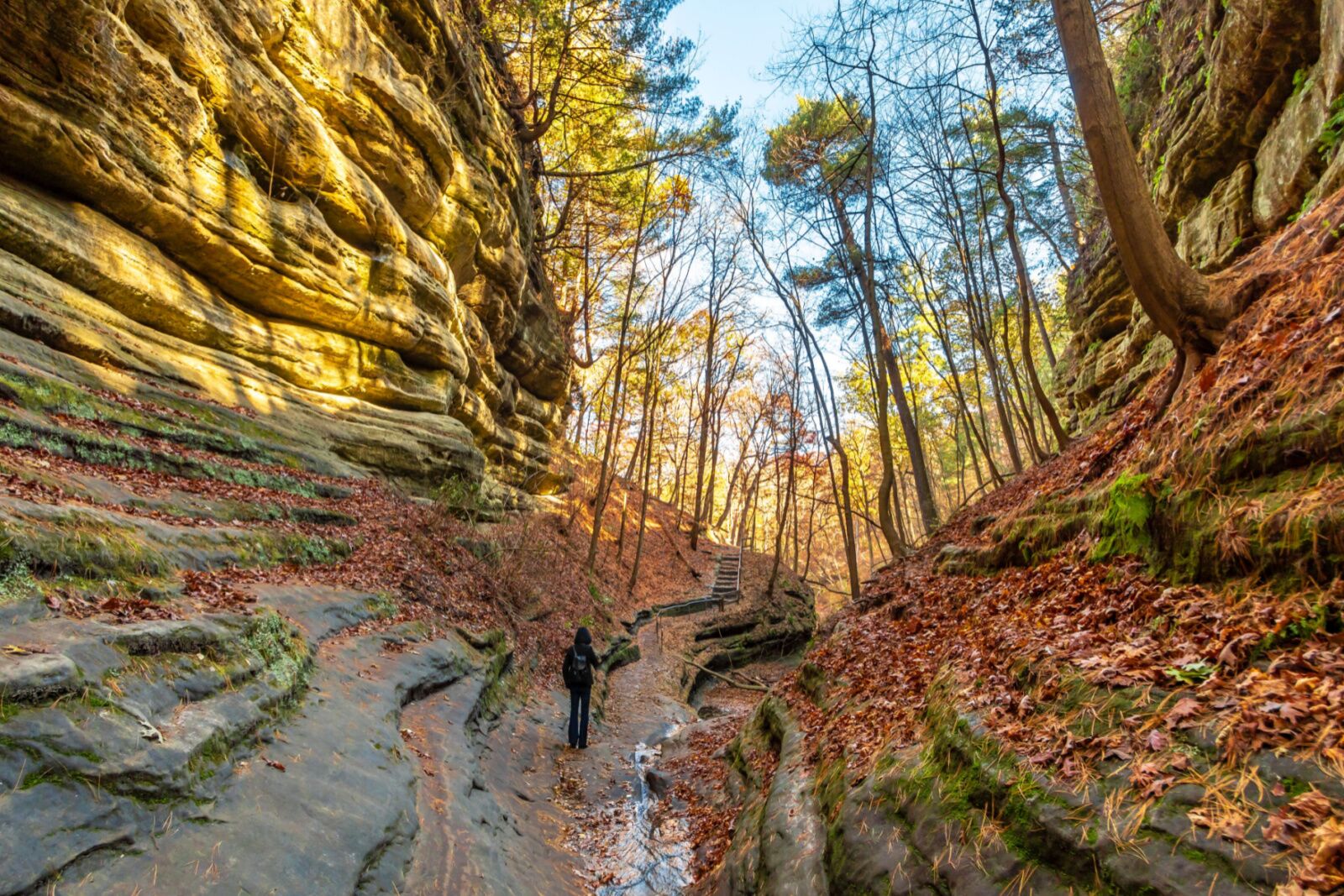 Are state parks free in Illinois?

Great news for budget travelers: all the Illinois state parks are free for visitors. The only exceptions are state parks that have beaches, which usually charge $1 per person for day as an access fee. Just make sure the one you’re visiting is a state park as some private parks, like Wildlife Prairie Park, do charge an admission fee.

What is the biggest state park in Illinois? 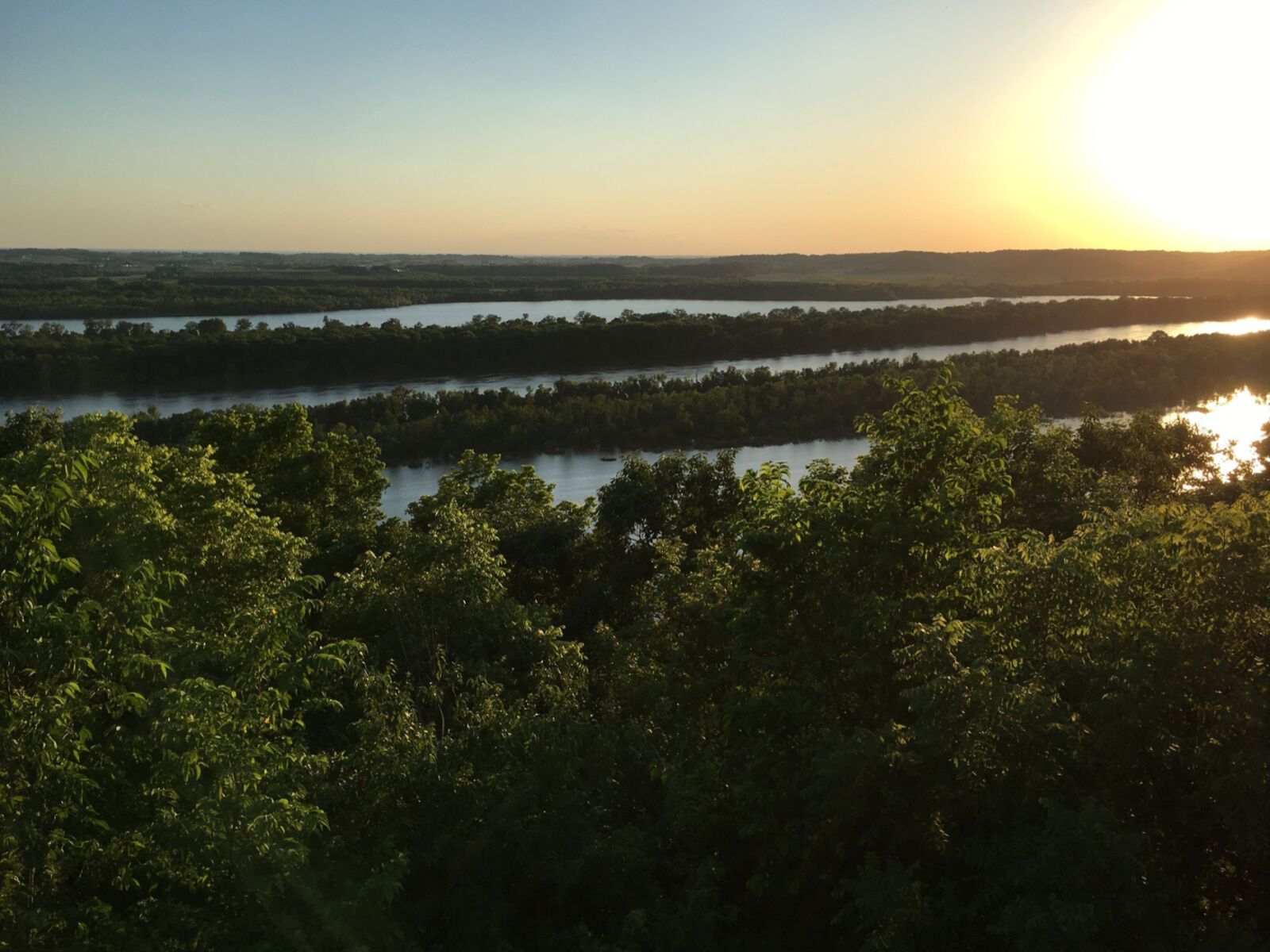 The largest state park in Illinois is Pere Marquette State Park at about 8,000 acres, which is pretty big considering how close it is to extremely metropolitan St. Louis. The largest area managed by the state, however, is Hennepin Canal Parkway State Park at 60,314 square acres, followed by the Rend Lake State Fish and Wildlife Area at 38,900 square acres.

Trip PlanningHere’s Why Illinois Is Still Awesome Even if You Skip Chicago
Tagged
Outdoor Illinois, United States
What did you think of this story?
Meh
Good
Awesome

Rockford, Illinois, Is an Outdoor Haven Perfect for a Weekend Escape From Chicago

These Airbnbs in Galena, Illinois, Showcase the Best of the Town