Japan is well-known as a must-visit destination for people who travel in order to sample the freshest ingredients, prepared with the most elegant and precise techniques. If you love good food, basically, Japan is on your bucket list. But given that its most famous dishes are centered around meat and fish – for example sushi, sashimi, and Kobe beef — you’d be forgiven for thinking that vegan and vegetarians are excluded from enjoying the culinary wonders of Japan. Thankfully, that’s a common misconception. In fact, beneath its seafood-loving surface, Japan has plenty to tempt plant-based travelers. From traditional temple cuisine to contemporary animal-free creations that are growing in popularity as the plant-based diet trend sweeps Japan, you’ll be pleasantly surprised by just how much is on offer. Here are a few ways that vegans and vegetarians can enjoy Japanese cuisine, plus the restaurants to try if you want to make your trip meat-free. 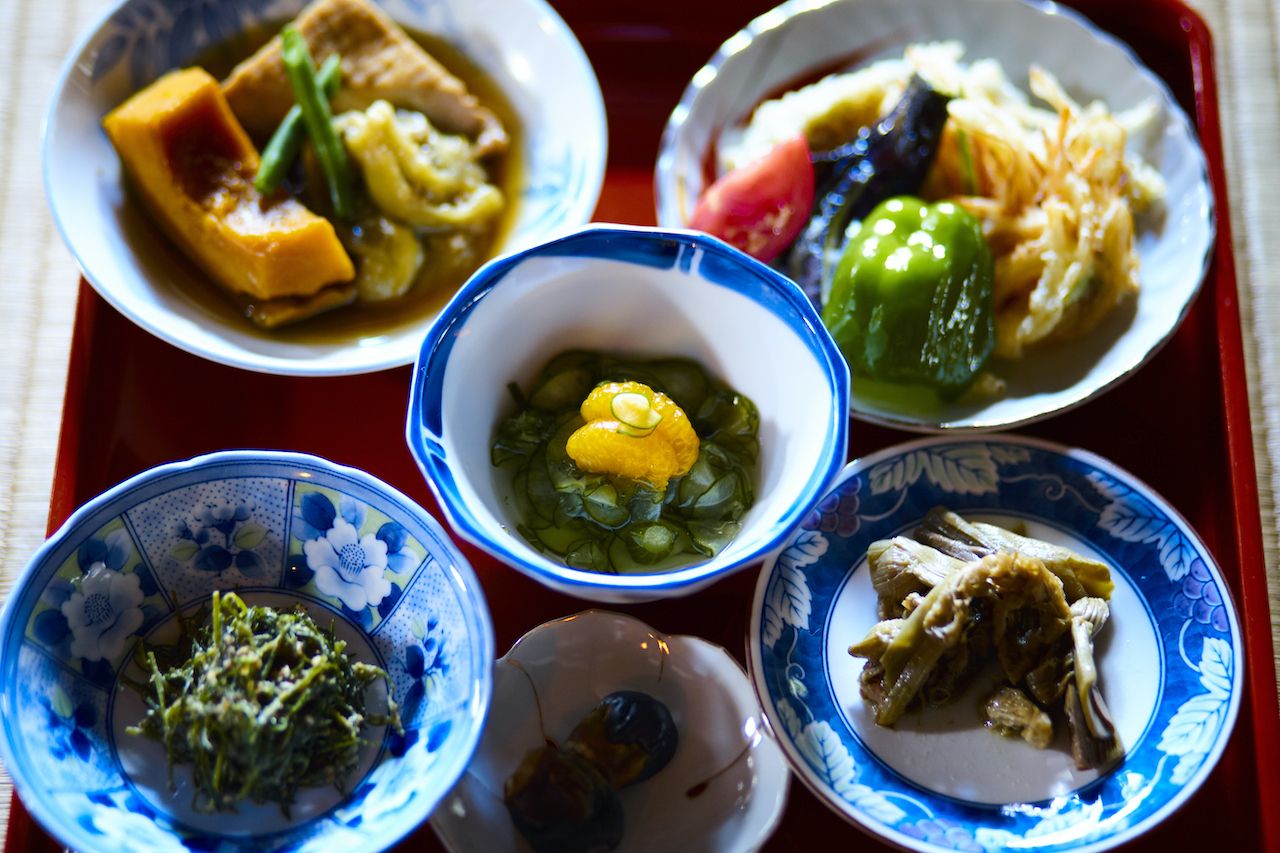 Shojin ryori is a style of eating originally developed by Buddhist monks, and really took off in the 13th century with the rise of Zen Buddhism in Japan. Rooted in the Buddhist tradition of ahimsa (non-violence), shojin ryori literally translates as “devotion cuisine.” Preparing it was intended as a form of spiritual practice and the ingredients used were chosen to align with Buddhist precepts. In addition to not using animal products, some Buddhist sects also don’t use any pungent ingredients such as garlic or onion because they are thought to excite the senses.

Much of the traditional preparation of shojin ryori is based around the rule of five, to ensure balance and harmony in a meal. This practice is reflected in the five main cooking techniques — simmering, steaming, grilling, frying, and leaving something raw — as well as five colors (black, white, green, red, and yellow) and five flavors (sweet, sour, salty, bitter, and umami). Such variation also helps to make the cuisine interesting for those eating it, and the resulting dishes are far from the bland and uninspiring meals you might expect from monks’ fare.

Shojin ryori focuses on the use of seasonal ingredients, with menus changing frequently to showcase the freshest produce sourced locally. In addition, chefs avoid food waste by using ingredients in their entirety — all of which makes this cuisine a particularly environmentally friendly and sustainable option.

The vegetables you’re more likely to encounter in shojin ryori include lotus root, mushrooms, wakame and nori (two types of seaweed), and pumpkin, among others. Vegetables can be pickled, served in a vegan dashi broth, steamed, or boiled.

The best way to enjoy shojin ryori is at a temple such as Tenryu-ji in Kyoto’s Arashiyama district, which has a specialist restaurant called Shigetsu on its beautiful grounds. Others — including several in the mountaintop temple town of Koyasan — allow visitors to stay overnight, with the chance to participate in meditation classes as well as enjoy a shojin ryori dinner and breakfast in a peaceful tatami room. Meanwhile, for those looking for something more contemporary, the shojin ryori cuisine has branched out from its humble origins into a more innovative style of cooking at restaurants such as Sougo in Tokyo.

Wherever you choose to sample shojin ryori, the cuisine will be served as a series of small dishes. Just as much thought goes into the presentation as into the cooking, so don’t be surprised if your plate comes out looking more like a work of art than a meal! You can expect a mix of Japanese classics such as tempura and miso soup, plus all sorts of interesting tofu dishes like gomadofu (sesame tofu), yuba (bean curd sheets), and yudofu (hot tofu). 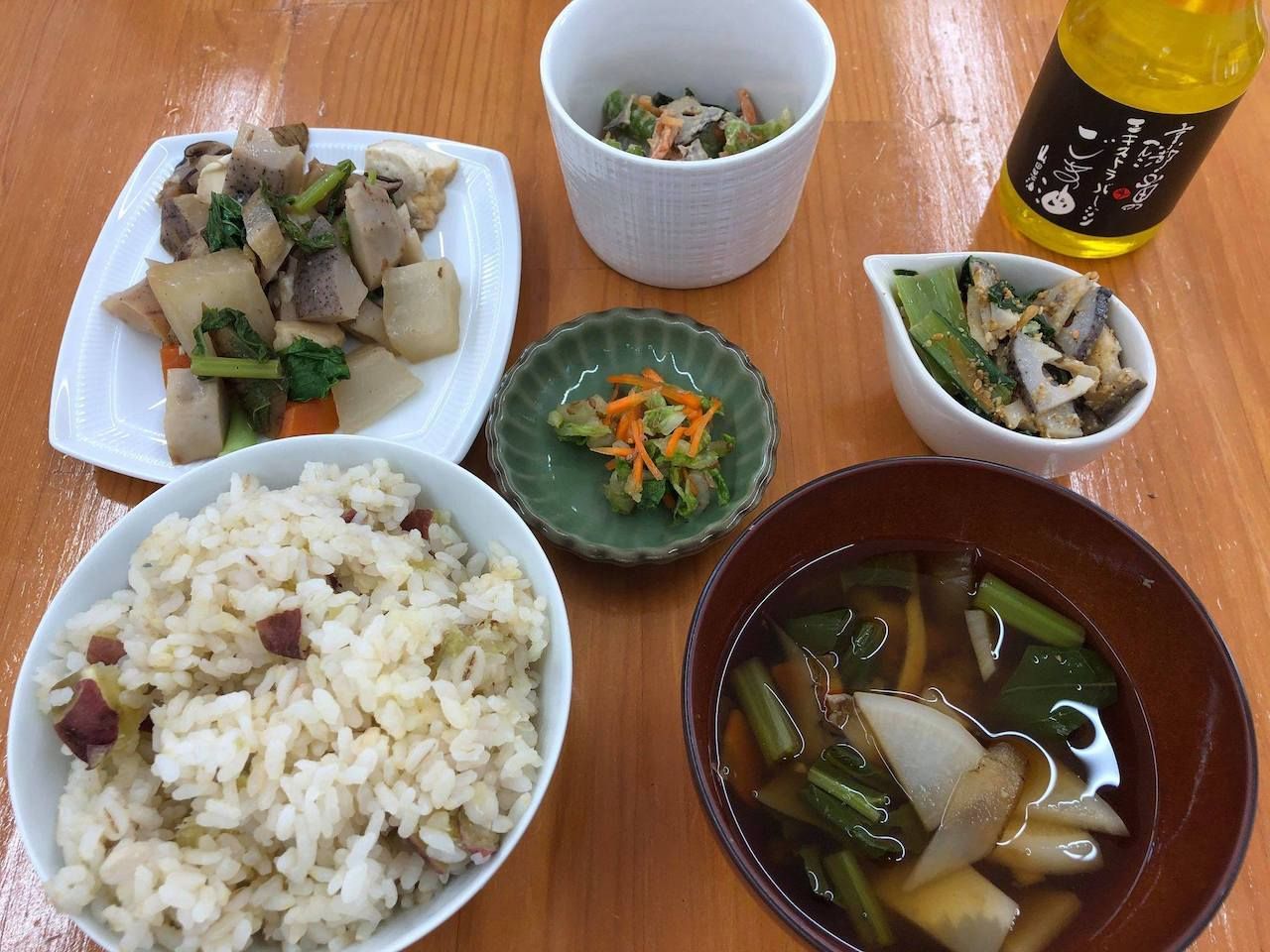 Nowadays plant-based eating in Japan has developed far beyond shojin ryori — you just need to know where to look. Many standard restaurants still offer very little in the way of vegan options and are often reluctant to make substitutions, so the best idea is to search for vegan or vegan-friendly eateries in advance. This is especially true if you don’t speak Japanese, as language can be a bit of a barrier sometimes.

Luckily the modern vegan movement in Japan is growing, albeit slowly. According to an article in the Japan Times, a study from Vegewel “suggests the number of vegans doubled from 1 percent in 2017 to 2.1 percent in 2019,” and there are more and more plant-based restaurants, bakeries, and cafes opening here all the time. It’s not just in Tokyo either. From Sapporo in the northernmost prefecture of Hokkaido all the way down to the Okinawa islands in the south, creative vegan eateries are popping up everywhere. 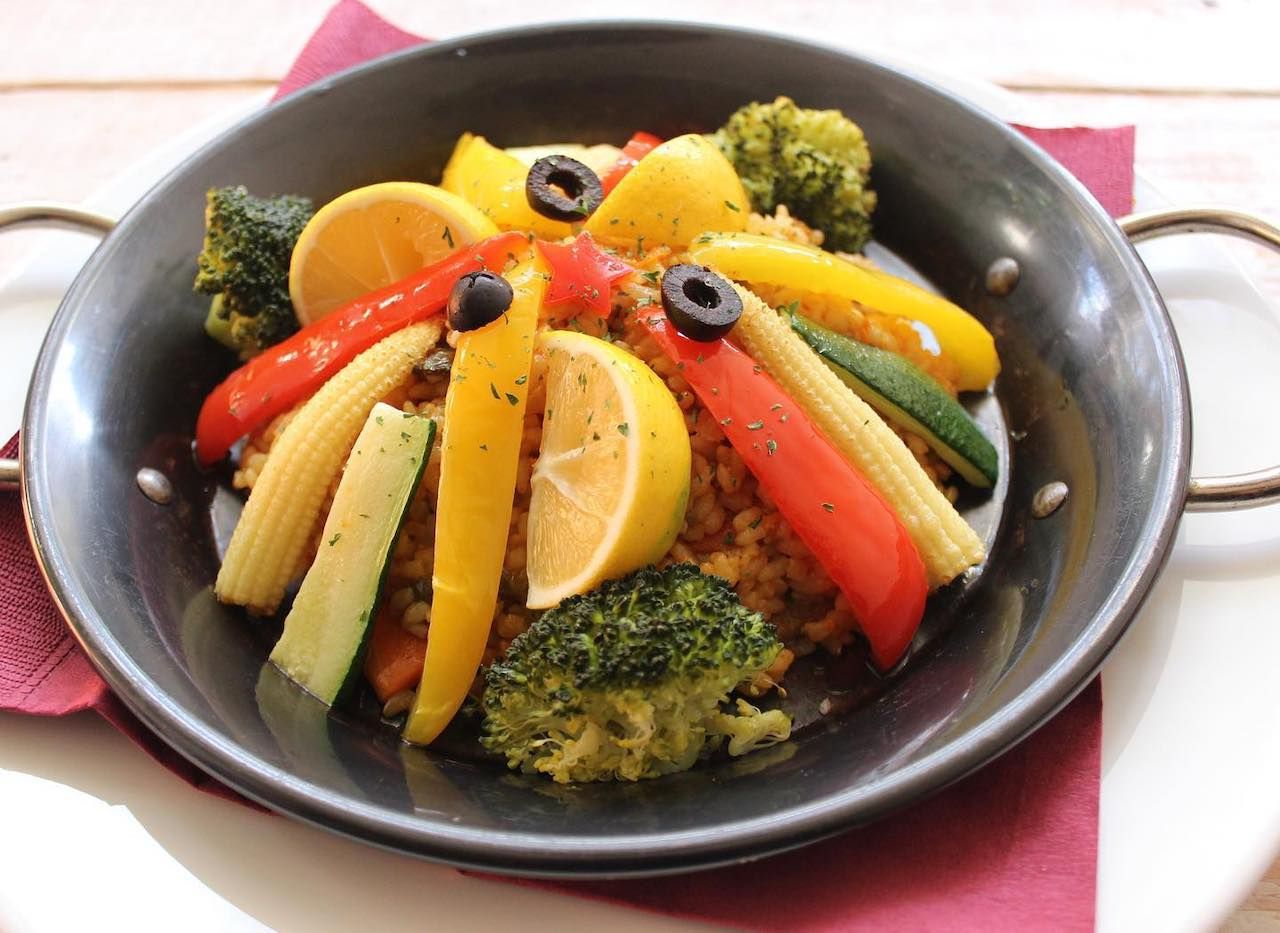 One of the most vegan-friendly cities in Japan is its ancient capital Kyoto. You can find burgers made with soy-based faux meat or fish, eggplant and sweet potato curries, vegan and vegetarian pizzas, donburi rice bowls, and traditional Japanese lunch or dinner sets that are served with rice, miso soup, and vegetable dishes. From the upmarket restaurant Choice which makes its own vegan cheese on site, to relaxed cafe Gomacro Salon and its sesame-infused vegan menu, the options are impressive. For dessert, the best place to go is Ain Soph Journey for its delightfully fluffy pancakes made with matcha tea from the local town of Uji, which produces some of the best quality green tea in the country.

The traditional combination of matcha tea and sweets is actually a great option wherever you are, as the majority of Japan’s wagashi confectionery and mochi rice cakes are vegan. Made with ingredients such as sweet bean paste, rice flour, bracken starch, agar, and black sugar syrup, they are worlds away from Western desserts and well worth trying – not least because of how elegant they look. Handcrafted into colorful flowers and leaves to match the season, they’re simply crying out to be Instagrammed.

Tips for vegan travelers in Japan 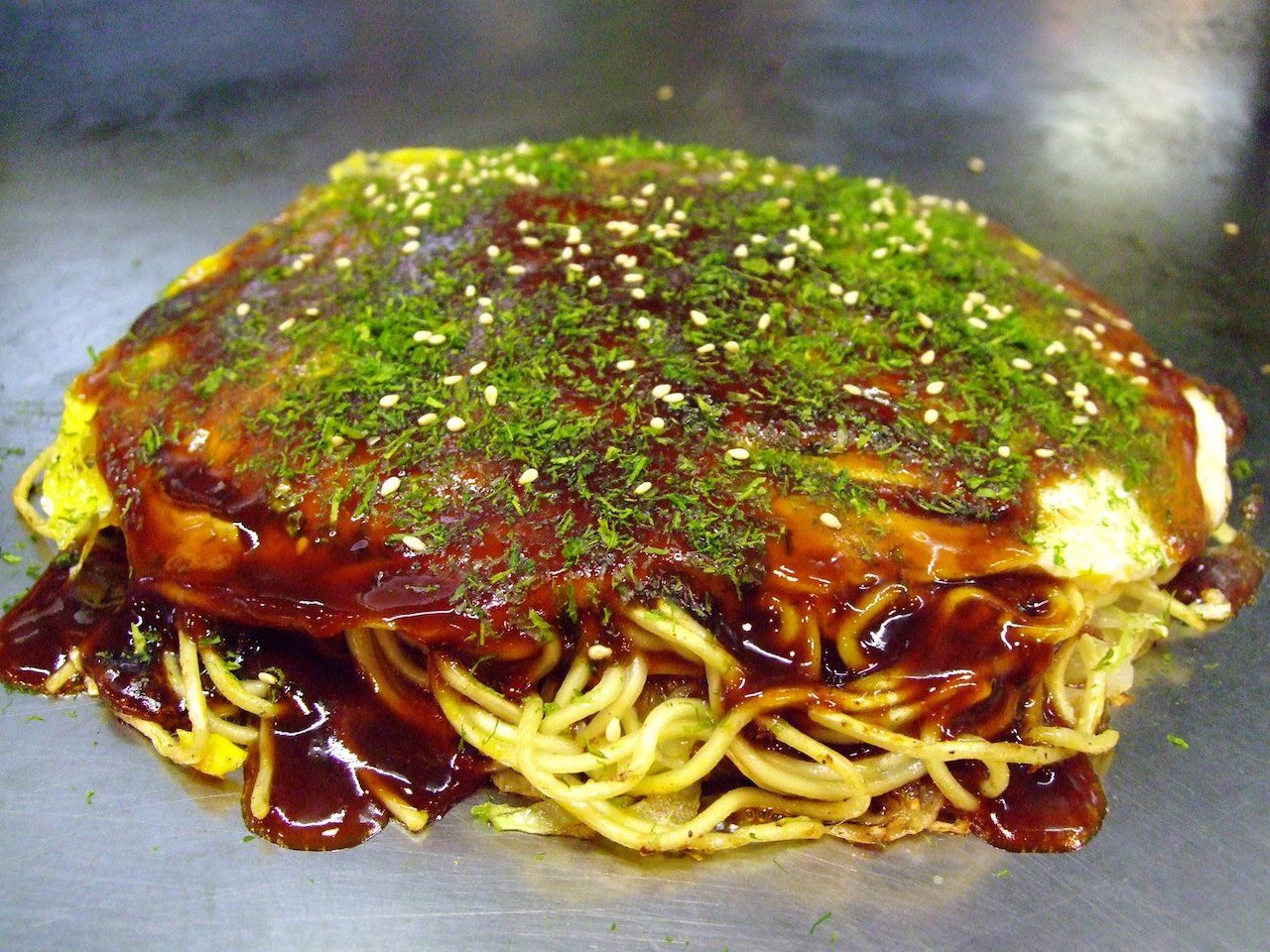 For snacks on the go, convenience stores are surprisingly handy for vegans. Onigiri rice balls filled with seaweed, pickled plum (ume), or fermented soy beans (natto) and are usually free of animal ingredients, as well as the warm, freshly roasted sweet potatoes known as yaki imo, which smell as good as they taste.

If you’re eating at a restaurant that serves meat alongside vegetable dishes in Japan, there are a couple of ingredients vegans and vegetarians need to watch out for: dashi fish stock and katsuobushi fish flakes. These can crop up even in dishes that appear to be vegetarian or vegan, and might not be listed on the menu, so ask your server if you’re unsure.

The following phrases can be helpful in restaurants with limited English: 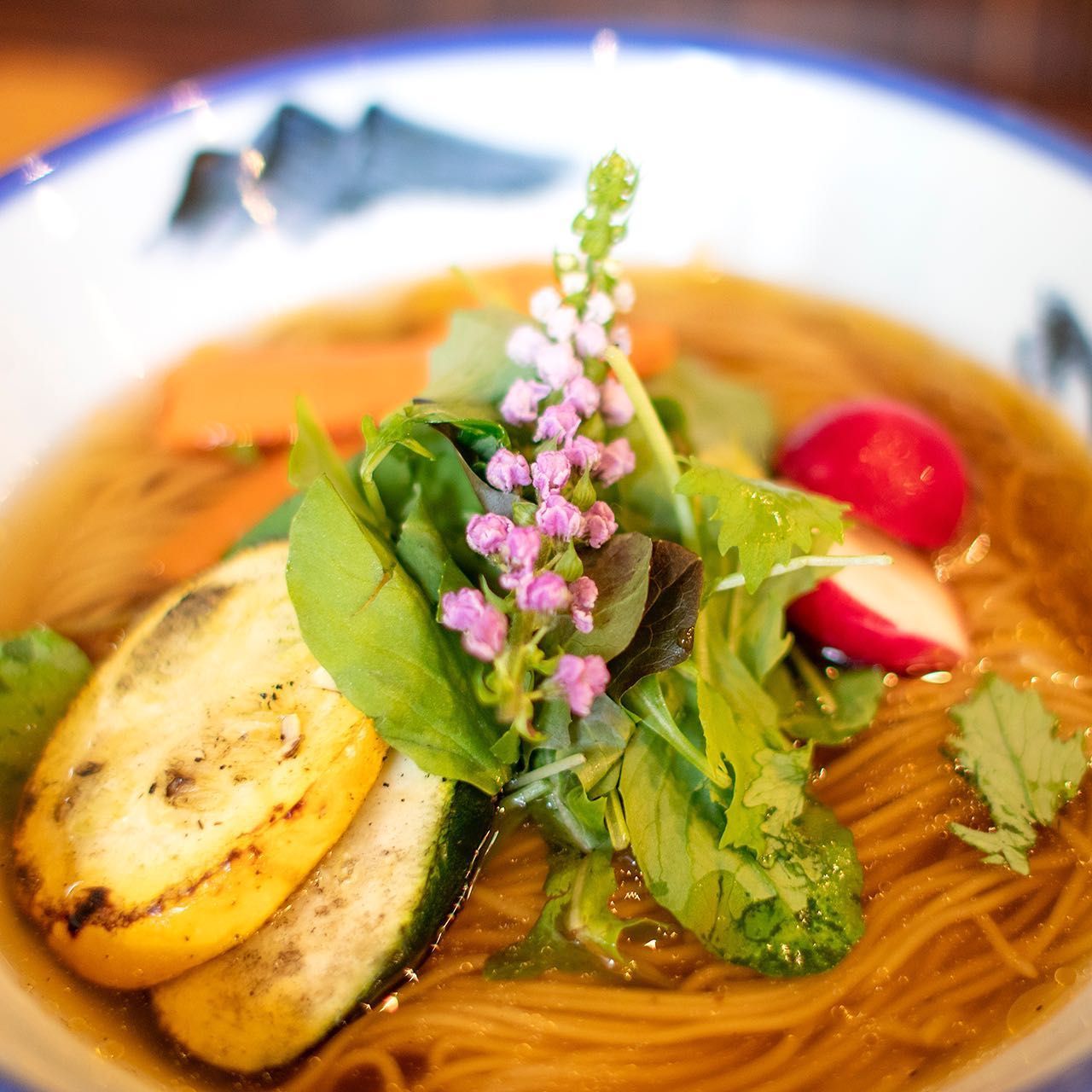 With awareness of veganism on the rise, many omnivorous restaurants are beginning to add plant-based options to their menus — particularly those that cater to English-speaking customers. Being vegan doesn’t mean you have to miss out on sampling the local delicacies. For example, Nagataya in Hiroshima offers vegan okonomiyaki (a pancake-like dish that typically consists of yam, eggs, and cabbage); Onwa, a vegan and plant-based cafe in Nara, has plant-based karaage (fried “chicken”) on the menu; and in Tokyo, Soranoiro, Afuri, and T’s Tantan all serve up vegan ramen.

So if you’re vegan, don’t let Japan’s reputation as a destination where you have to eat seafood to survive stop you. With a little planning, you’ll be enjoying some of the best plant-based food you’ve ever had.

Food + DrinkThe Bullet Train Is One of the Best Places To Try Regional Japanese Cuisine
Tagged
Vegetarian Japan
What did you think of this story?
Meh
Good
Awesome