In Timothy d’Offay’s book The Life of Tea, which he co-authored with Michael Freeman, d’Offay characterizes Japan’s love of green tea as a “near-obsession.” Well, that’s almost true. Japanese people actually drink more coffee than tea, according to Hiroshi Nishikawa, assistant director of the Tea Industry Development sector of Shizuoka prefecture’s local government. That certainly doesn’t mean tea is going out of style, though.

Data from 2013 suggests that the average Japanese person drinks 925 grams of green tea (known as ryokucha) per year. Green tea is by far the most consumed type of tea in Japan. The most popular way to drink green tea is in the form of a cold, refreshing bottle beverage, but it’s also infused into ice cream, macarons, cookies, and dorayaki pancakes.

Tea has a long history in Japan dating back to the ninth century, and it’s at the heart of one of the most sacred rituals in the country: the tea ceremony. Though there is no firm historical record, Nishikawa explains that Zen master Yosai Myoan (sometimes also spelled Eisai) returned from China around 1191 with seeds for tea plants, which he planted at Mt. Sefuri in Kyushu. He also gave some of the seeds away to a priest called Myoe Shonin at Kozai-Ji Temple so he could begin cultivating tea in Kyoto. However, it’s likely that tea plants were growing in Japan even before Yosai Myoan’s return from China.

It wasn’t until the late 15th century that the formalized tea ceremony emerged when tea masters like Sen no Rikyu incorporated deep spirituality into the practice, which can still be felt by modern tea drinkers.

“Japanese tea is a presence that facilitates communication by [instilling] a sense of family friendship and comfort,” Nishikawa explains in an email.

Today, there is a full spectrum of green tea on the market, from refreshing, almost lime green-hued sencha to the high-quality, aromatic gyokuro to the popular powdered green tea known as matcha. All of them are worth trying if you want to get a taste of Japan’s complex tea culture. Here’s a comprehensive guide to every type of green grown in Japan. 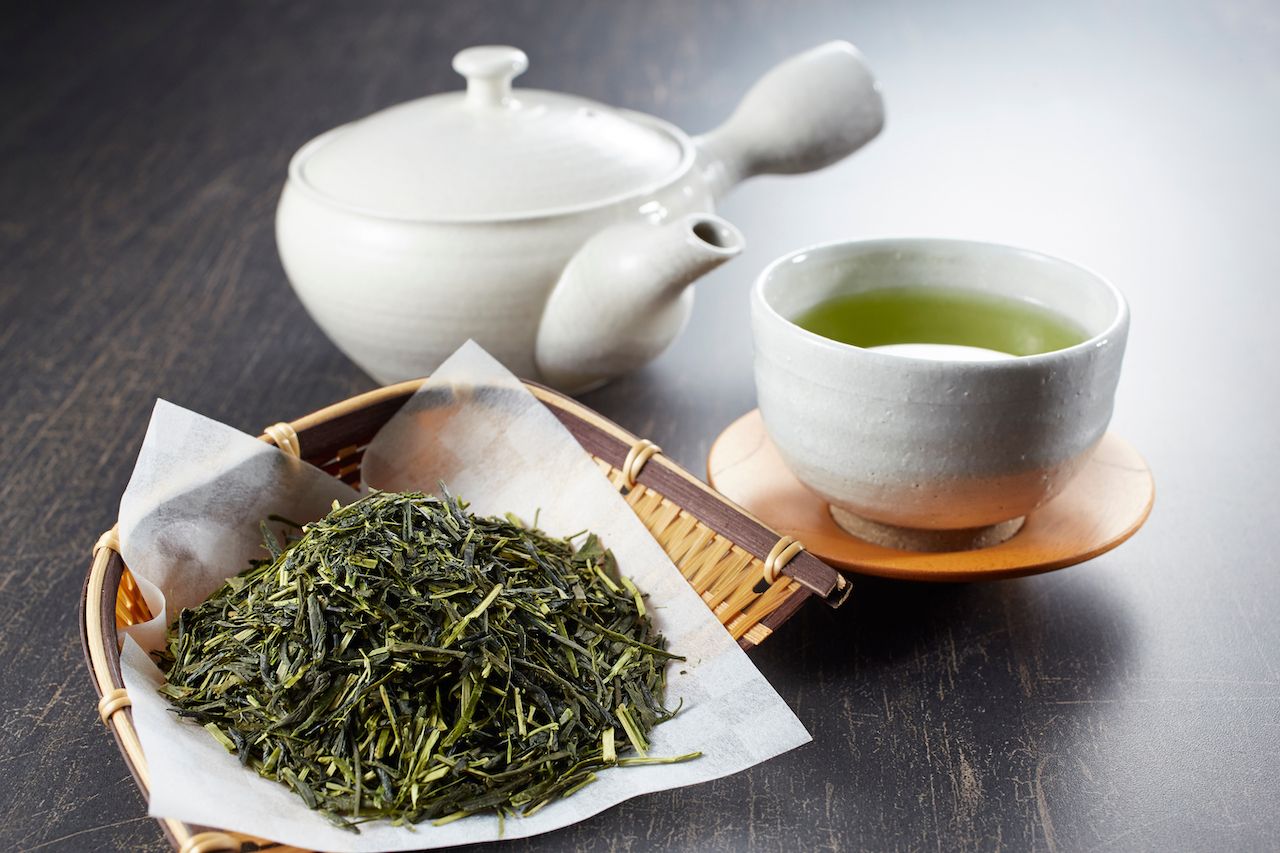 Sencha, meaning roasted or simmered tea, is the most widely consumed green tea in Japan. According to legend, a monk who became known as Baisao (“old tea seller”) introduced sencha to Japan in the late 16th century. Instead of grinding the tea leaves into a fine powder as is done with matcha, he infused the leaves into boiling water. Sencha soon became known as loose-leaf green tea steeped directly in the teapot. Sencha’s flavor is sometimes described as refreshing, grassy, or astringent, and it’s almost neon green in hue. One variety, called kabuse sencha, is grown in the shade, which heightens the chlorophyll content of the leaves, leaving behind a richer flavor.

Tencha is the name for tea leaves used to create matcha before they are ground up. Shade-grown tencha tea leaves contain a chemical called theanine which imparts the tea with a subtle and mellow flavor. Tencha is cloudy and pale green in color. The traditional method for growing tea leaves in the shade is called honzu and involves erecting a straw canopy over the plants, though it’s rarely used anymore because of its labor intensive nature. While most tencha is ground up into matcha, it can also be drunk as a steeped tea. 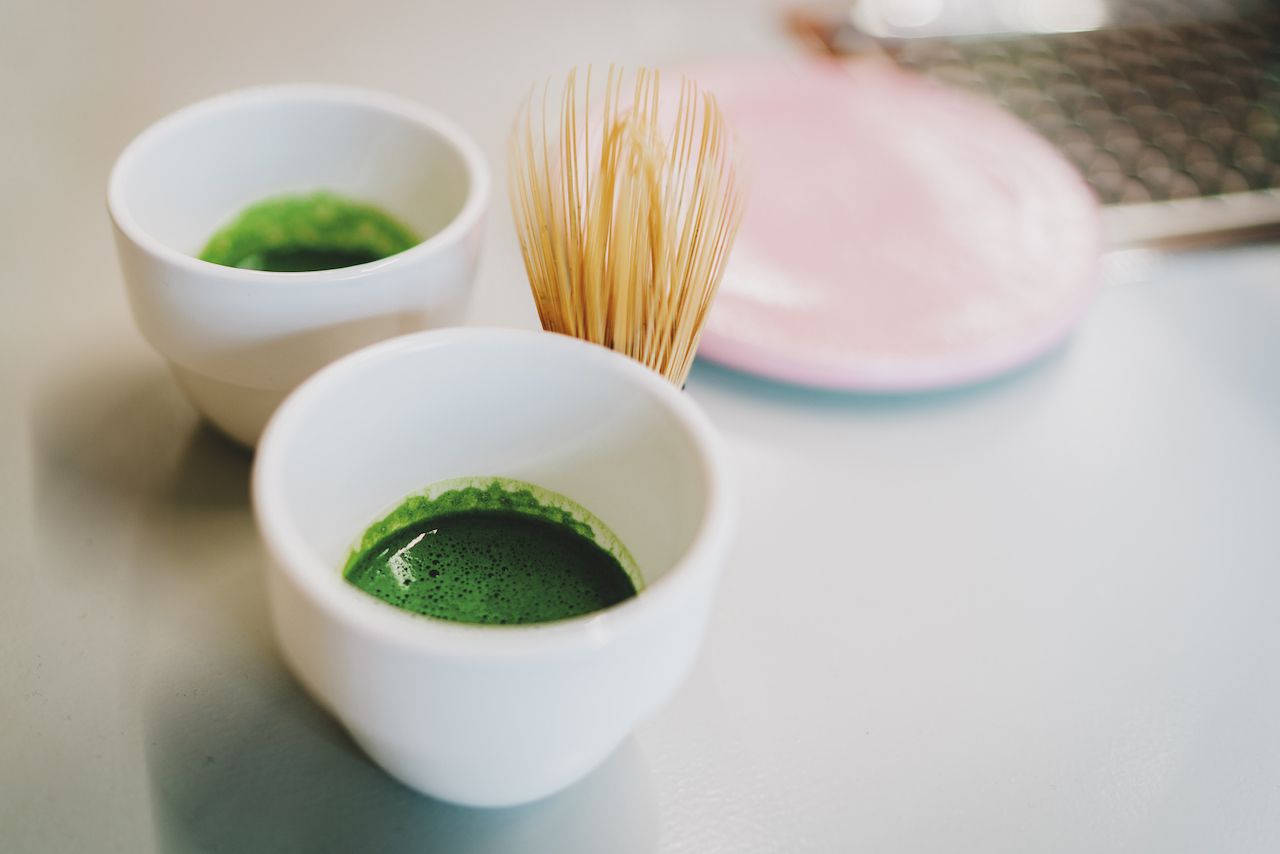 The centerpiece of the traditional Japanese tea ceremony, matcha is techna green tea leaves that have been ground down to a fine powder. The powder is whisked into hot water rather than steeped. Matcha is likely the first type of green tea to appear in Japan: When the monk Eisai returned from China, he brought back with him not only seeds but also the newfound knowledge of how to prepare powdered green tea. Today, matcha is used all over the world to flavor ice cream, coffee, cakes, smoothies, and even Kit Kat bars.

Shincha is made from the youngest and most tender leaves from the tea plant. It’s the highest quality green tea, and it’s picked from the first or second flush of the spring harvest season. Many tea producers claim that during the winter months amino acids build up in the leaves, resulting in a sweeter, less bitter taste. 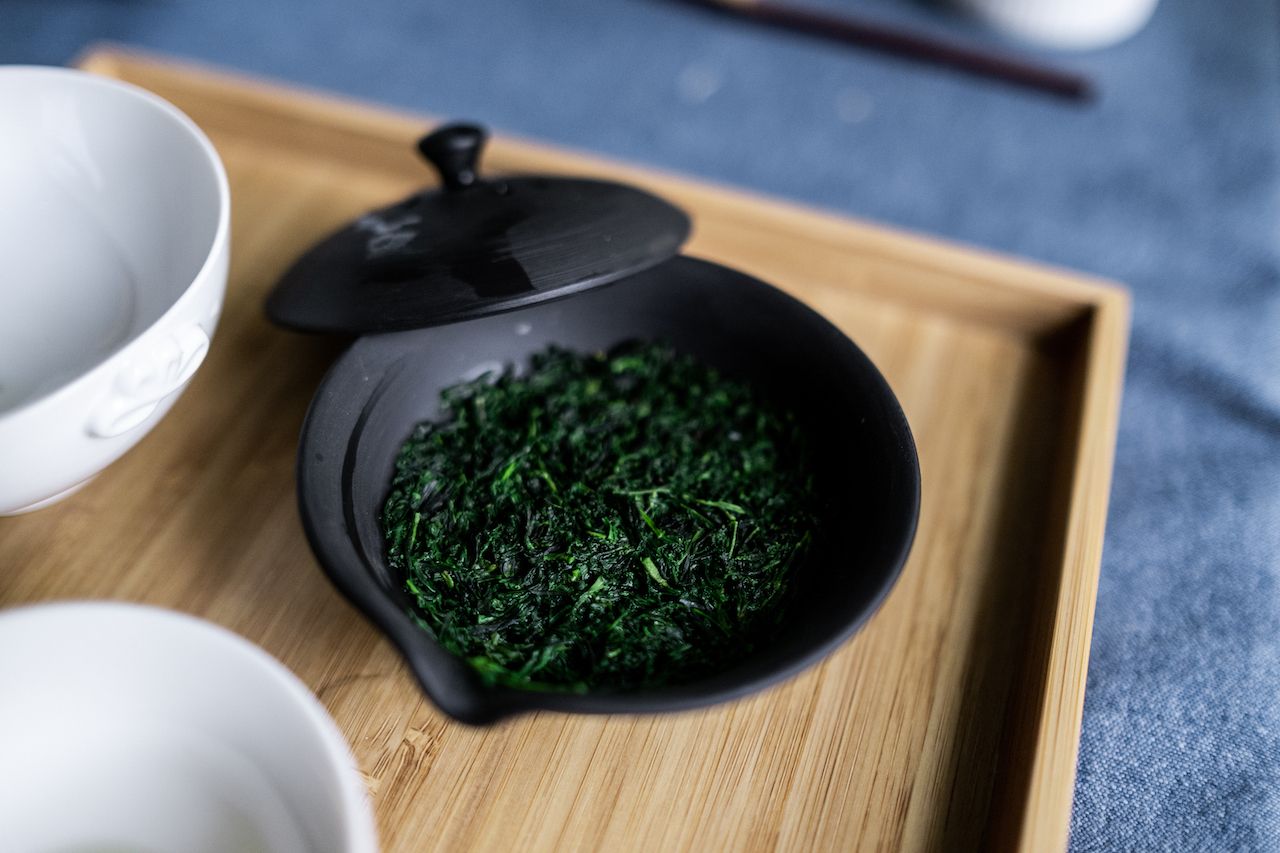 Gyokuro means “jade dew” in Japanese. It’s the highest grade of green tea in the country, and the most expensive. Introduced to the Uji region of Japan in the mid-17th century, the most important characteristic of gyokuro tea is that it’s shade grown for as many as 30 days before harvest. Like tencha, gyokuro has a higher concentration of theanine and fructose, resulting in a smooth and sweet tea with a rich umami flavor.

Harvested from the same plants as sencha, bancha is the lowest grade Japanese green tea, on the other end of the spectrum from gyokuro. Bancha is considered lower grade because it’s either harvested later in the season after the first or second flush (harvest) or because the leaves that are picked are lower down on the shoot. There, the leaves tend to be coarse in texture whereas the more delicate leaves near the top of the shoot are considered higher quality. That doesn’t mean that bancha tastes bad. In Japan, it’s considered an everyday tea with an earthy flavor that takes on the color of straw. Another variety of bancha harvested in the Tokushima prefecture, called awabancha, is fermented before it is dried. 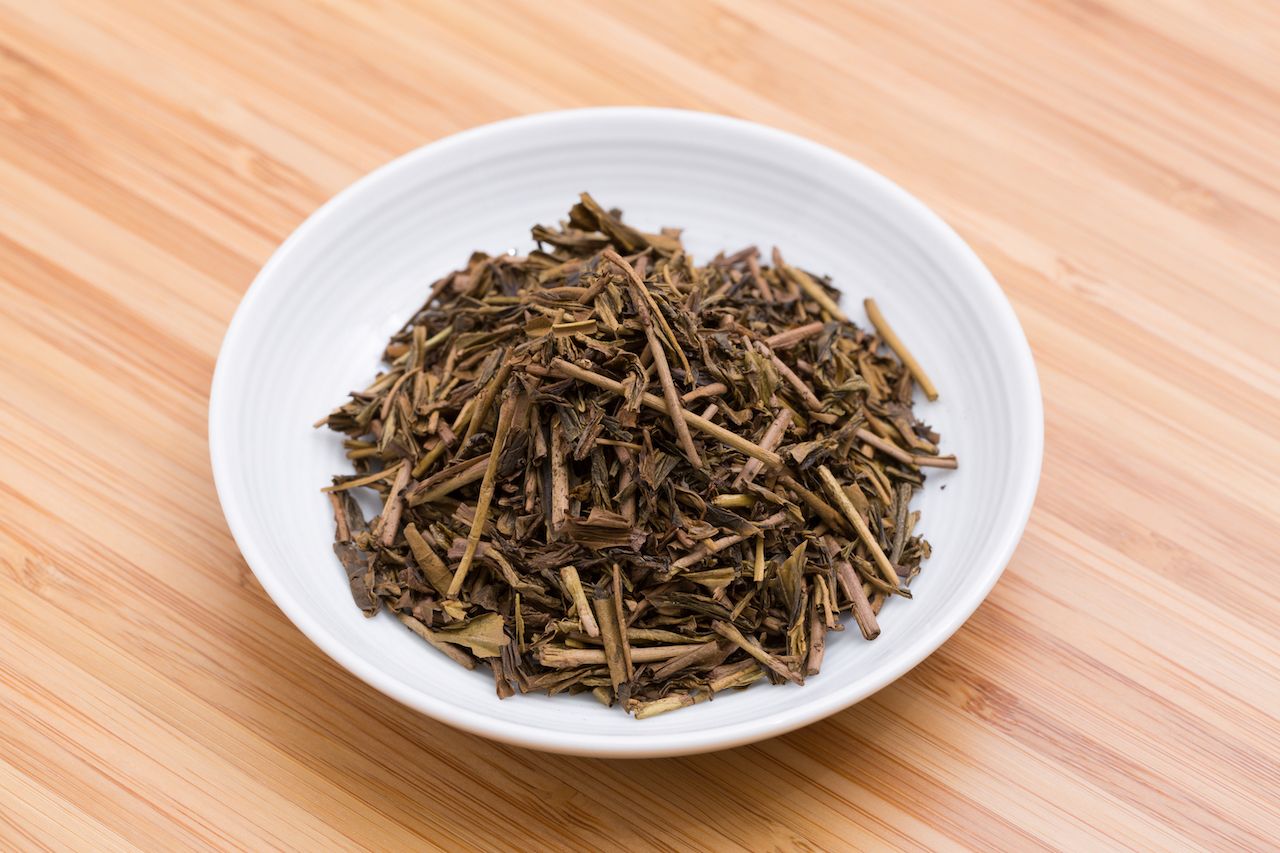 Hojicha has a few defining characteristics that help it stand out from the Japanese green tea pack: The leaves are roasted after being harvested and steamed. Roasting removes the bitterness, imparting the tea with an earthy, smoky flavor and distinct dark red hue. Hojicha is typically harvested in Kyoto from bancha tea leaves, making it a slightly lower grade than other green teas. Because it’s low in caffeine, it’s often served during an evening meal or before bed.

Fukamushi, produced in Shizuoka prefecture, means “deeply steamed.” Once tea leaves are harvested they are usually steamed from around 30 to 40 seconds — a necessary process called sassei, which halts fermentation and oxidation. However, the sencha or bancha leaves for fukamushi tea are steamed twice as long as usual (about a minute and half) before being dried. The softened leaves retain a sweeter, bolder flavor, and a texture that is sometimes described as “creamy” or “buttery.” The color is a cloudy, dark green, and it needs less time to steep. The softer leaves are also more fragile, often breaking up into particles that can gather as sediment in the bottom of the cup. 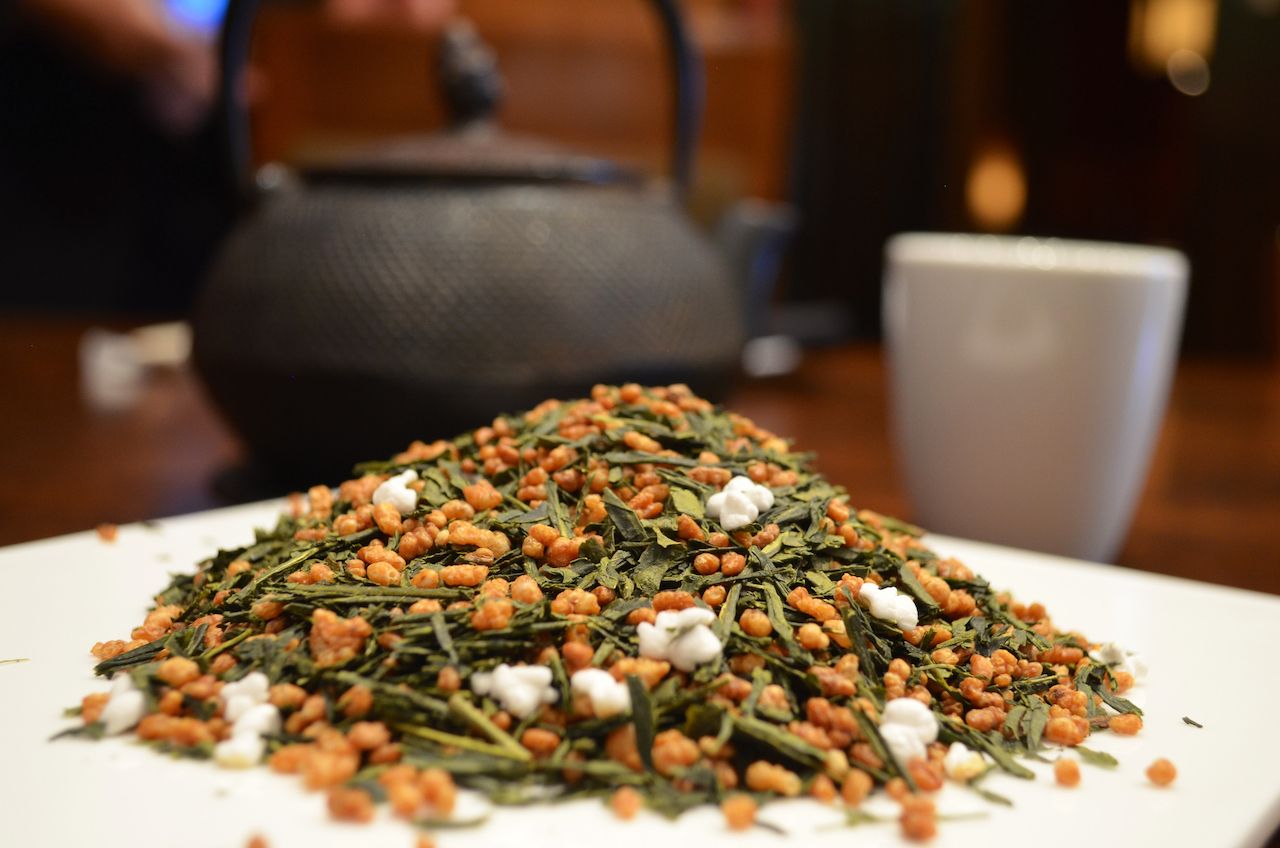 What makes genmaicha stand out is that kernels of brown rice are added to the bancha leaves as they dry. Sometimes the kernels pop during this process, earning genmaicha the nickname “popcorn tea.” According to legend, a servant in the 15th century was pouring green tea for a group of warlords and dropped a bag of brown rice into one of the cups, thereby spoiling the expensive beverage. But when the samurai sipped his tea, he found that the roasted rice added an earthy, full-bodied flavor to the bitter green tea. Another theory is that green tea was a luxury only enjoyed by aristocrats in the 15th century, so when ordinary people got their hands on bancha tea (lower grade tea harvested later in the season) they preserved it by adding brown rice to dried leaves.

Also known as tamaryokucha, this is a rare Japanese green tea. Harvested at first flush, guricha leaves are not steamed after being picked but are pan-fried, a more common technique in Chinese tea production. The leaves form a coiled shape during this process, which also sets it apart from other Japanese green teas. This clear, pale green tea is sometimes described as refreshing or light, and it’s mostly produced on Kyushu Island. 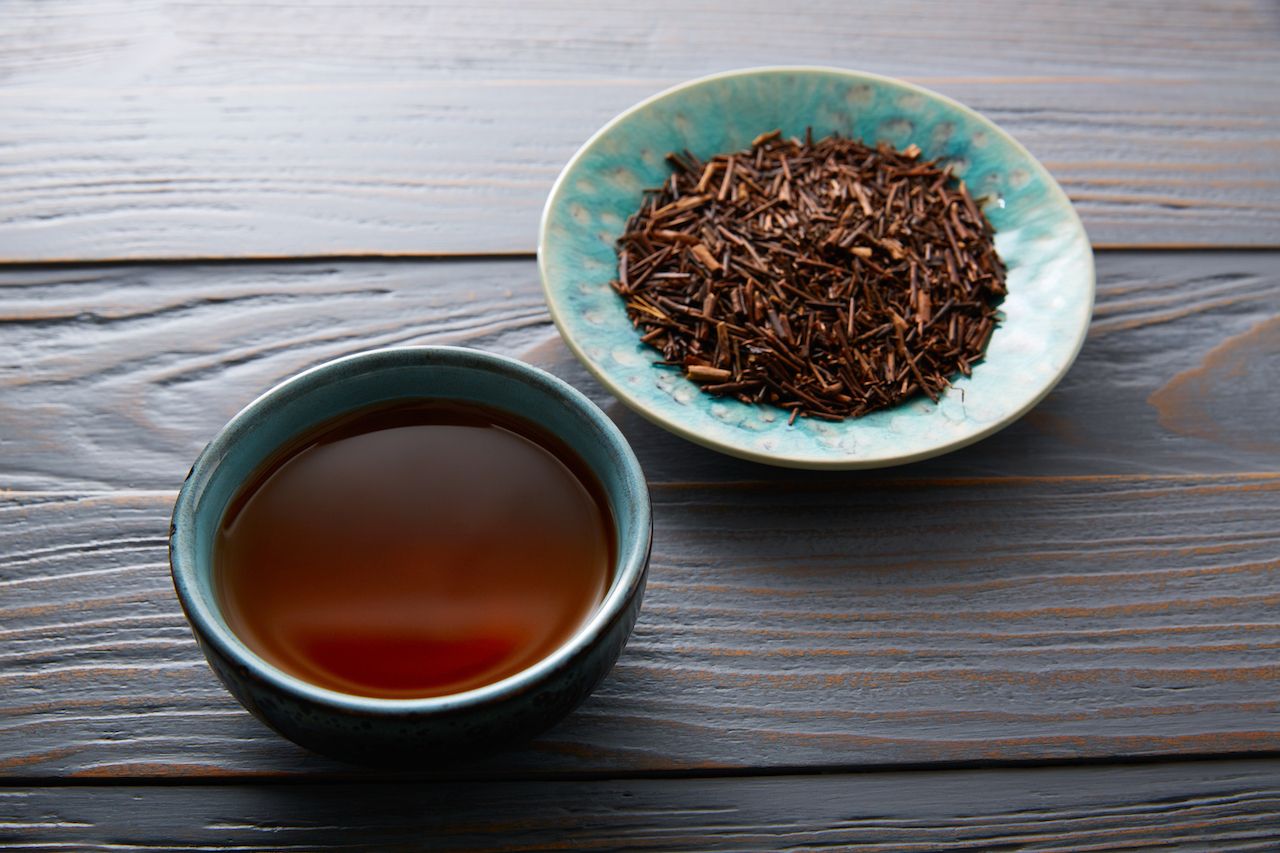 Kukicha consists of the byproducts of the tea production process: stems and twigs. This tea is mild and nutty in flavor and low in caffeine. Like fukamushi, it’s known for its “creamy” texture. The color of the steeped tea can sometimes be pale orange, similar to hojicha. In Kyoto, kukicha is known as karigane, which means “wild goose,” a reference to the fact that geese rest on branches floating in the sea during their migration periods.

Also known as kabuse, or “covered tea,” this tea is sometimes described as the mid-way point between sencha and gyokuro. Shade-grown for as few as 10 days, kabusecha is sweeter and less grassy in flavor. Kabusecha is rarer than sencha and gyokuro, however, accounting for less than five percent of the green tea grown in Japan. The best kabusecha can be found in the Yame region.

Coffee + TeaThe 5 Major Tea Regions of Asia You Need To Know About
Tagged
Coffee + Tea Japan
What did you think of this story?
Meh
Good
Awesome