In a literary sense, the stories of King Arthur put England on the map. Sure, Shakespeare churned out a play or two, and Dickens may have written a few words, but the Arthurian legends lend an air of magic to England that few other stories can claim to have done. This is partly because the myths are so deeply intertwined with the country’s history, values, landscape, and traditions. The stories blur the line between fantasy and history, leaving readers with a vague sense (and hope) that some of the Arthurian legends may have actually taken place. Whether it’s the famed Lady of the Lake or Dinas Emrys, the site of Merlin’s magical birth, the legends have ignited our imaginations since childhood, leaving us with the faint hope that maybe, on some level, they were real. Many sites associated with the Arthurian stories are scattered throughout the UK, and you can still visit them today. Here’s how to take the ultimate Arthurian tour of the UK. 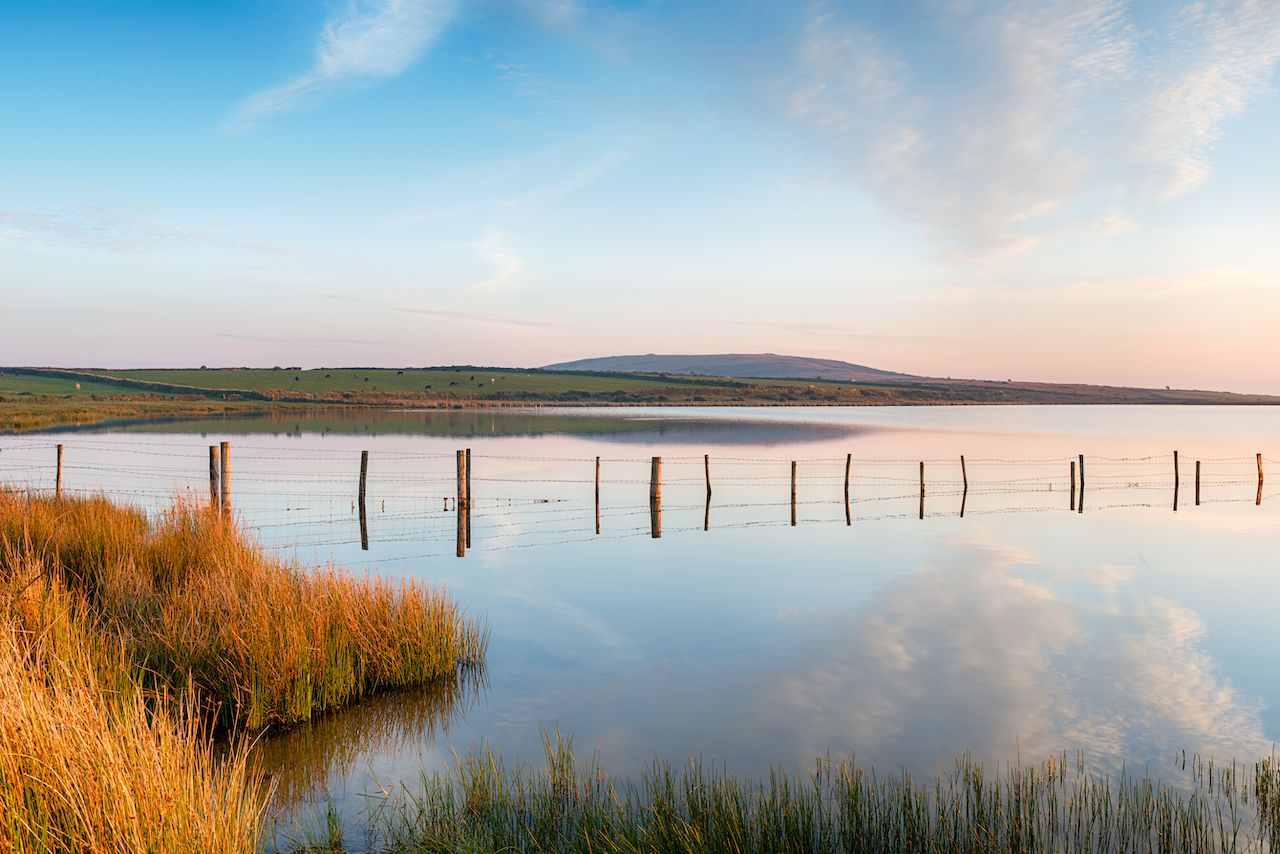 For your first stop on the tour, it’s only fitting to visit one of the most iconic settings associated with the King Arthur stories. In Sir Thomas Malory’s Le Morte d’Arthur, largely considered the authoritative text on Arthurian legend, Arthur was given his famous sword Excalibur by the mysterious Lady of the Lake. After Arthur was mortally wounded at the Battle of Camlann, the sword was returned to the Lady by Sir Bedivere.

The Lady of the Lake was said to reside in a small lake in Bodmin Moor, Cornwall. The moor itself is largely deserted, very much recalling the ancient England of legend, but visitors should pay special attention to Doemary Pool, the supposed home of the Lady of the Lake. The entire area, however, has been designated an Area of Outstanding Beauty and a Site of Special Scientific Interest. No, it’s not because Excalibur has been unearthed, but because traces of Neolithic artifacts were found on the shores of the pool. 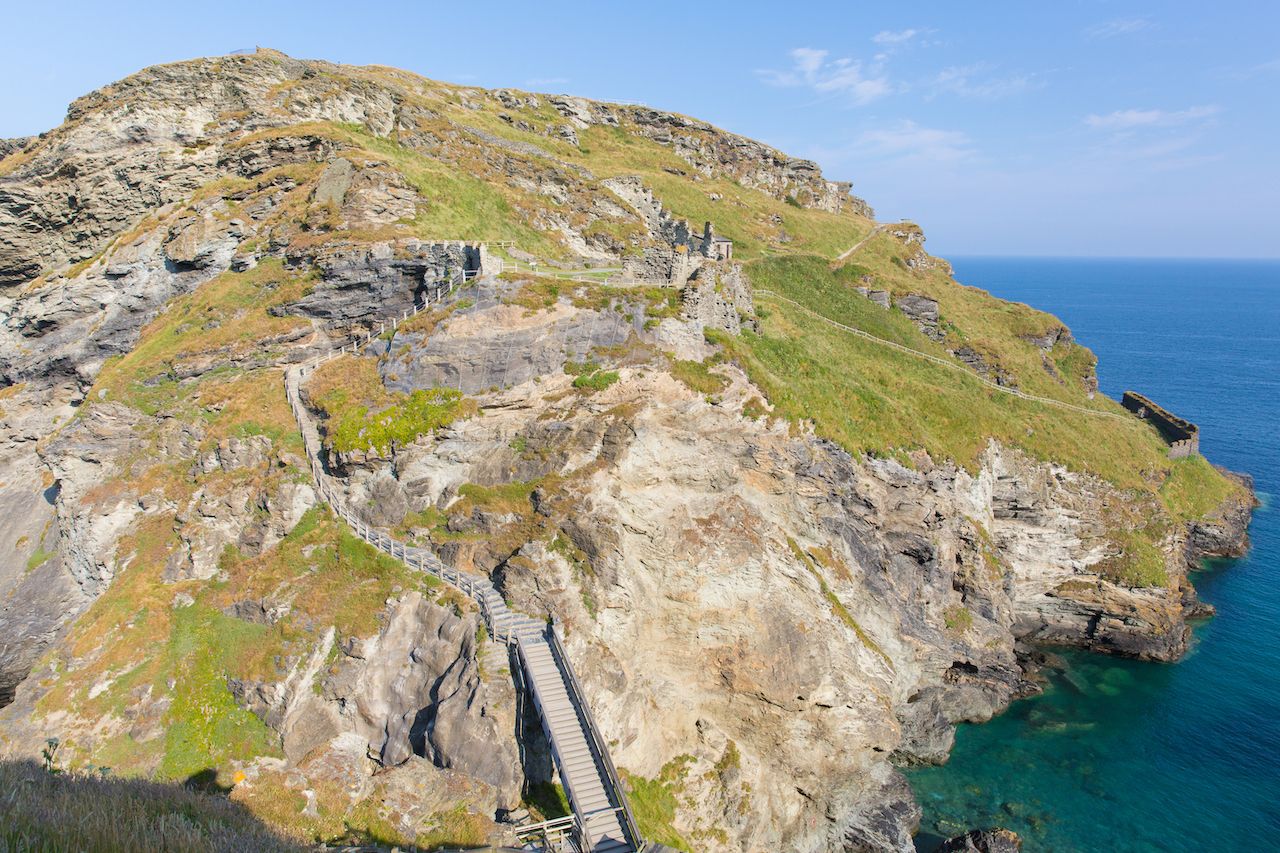 To truly understand the Arthurian legends, you should know the story of Tintagel Castle, where Arthur had his origins. Uther Pendragon, Arthur’s father, had been transformed by Merlin to resemble the Duke of Cornwall, who was Igraine’s husband. In this disguise, Pendragon entered Tintagel Castle and slept with Igraine, resulting in the birth of Arthur. Indeed, Arthur was not only conceived at the castle but born here as well, making it a pivotal location in the legends.

The castle sits on a peninsula on Tintagel Island, though the castle we see today doesn’t exactly date back to the Arthurian days. In the 13th century, the Earl of Cornwall was so taken by the story that he was inspired to build the castle. It had zero military or strategic purpose; it was simply an homage to the famous legend. Originally linked to the mainland by a narrow land bridge, that bridge eventually fell into disrepair, and until recently, visitors had to climb nearly 150 steps to reach the castle — much like Pendragon must have done. Just a few months ago, however, a new 223-foot bridge was built connecting Tintagel Castle to the mainland, making visiting the site easier than ever. 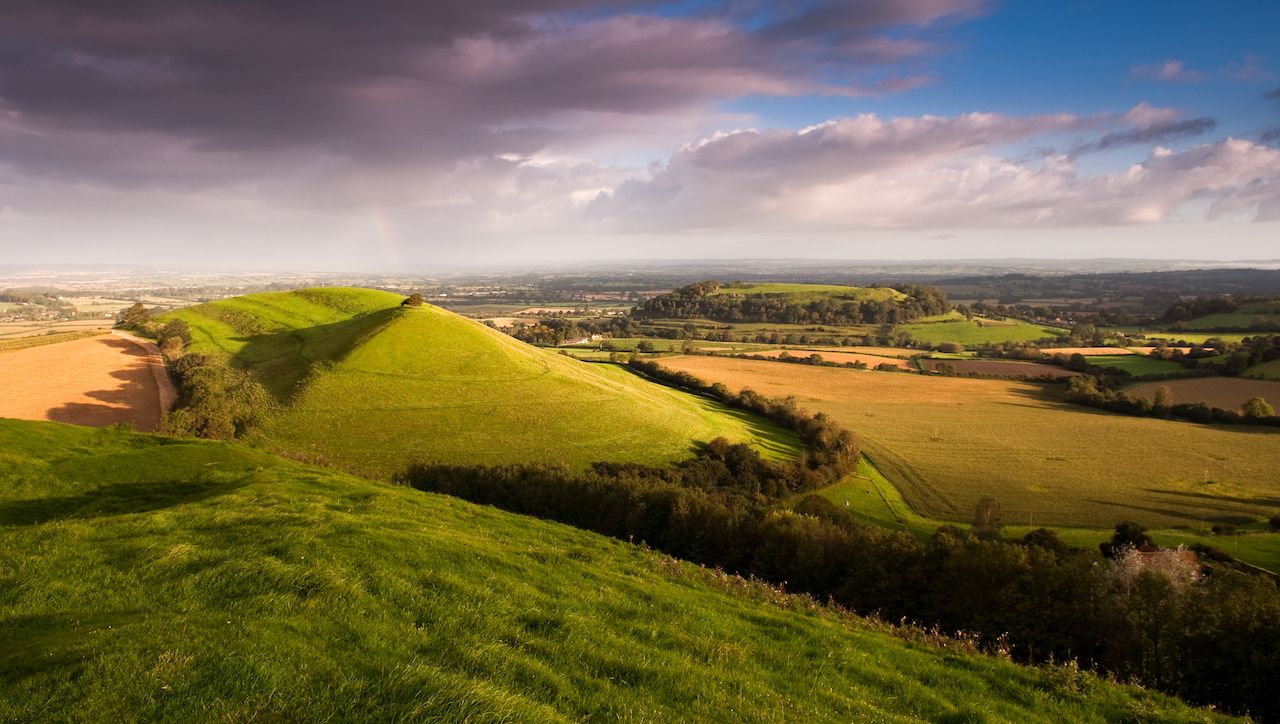 Even if you’ve never read a King Arthur story in your life, you probably still know Camelot. The seat of Arthur’s kingdom and the legendary court where the Knights of the Round Table convened, Camelot is the most central part of the Arthurian canon. Debates surrounding the location of the “real Camelot” have raged since the 1400s, and it’s unlikely that people will ever agree, but some sites certainly have better claims than others.

Cadbury Castle in Somerset has one of the best claims. No, it’s not filled with little chocolate eggs, but it was home to a warrior king named Arthur around the sixth century. Whether or not this is the same Arthur of legend is, of course, still up for debate, but the hillfort was occupied on and off for hundreds of years before falling to the Romans. The castle was first associated with Arthur in the writings of John Leland in the 1500s. “At the very south end of the church of South-Cadbyri standeth Camallate,” he wrote, “sometime a famous town or castle … The people can tell nothing there but that they have heard say Arthur much resorted to Camalat.”

Stories claim that Arthur and his knights are sleeping underneath the castle and wake every seven years on Midsummer’s Day to ride out across the land. 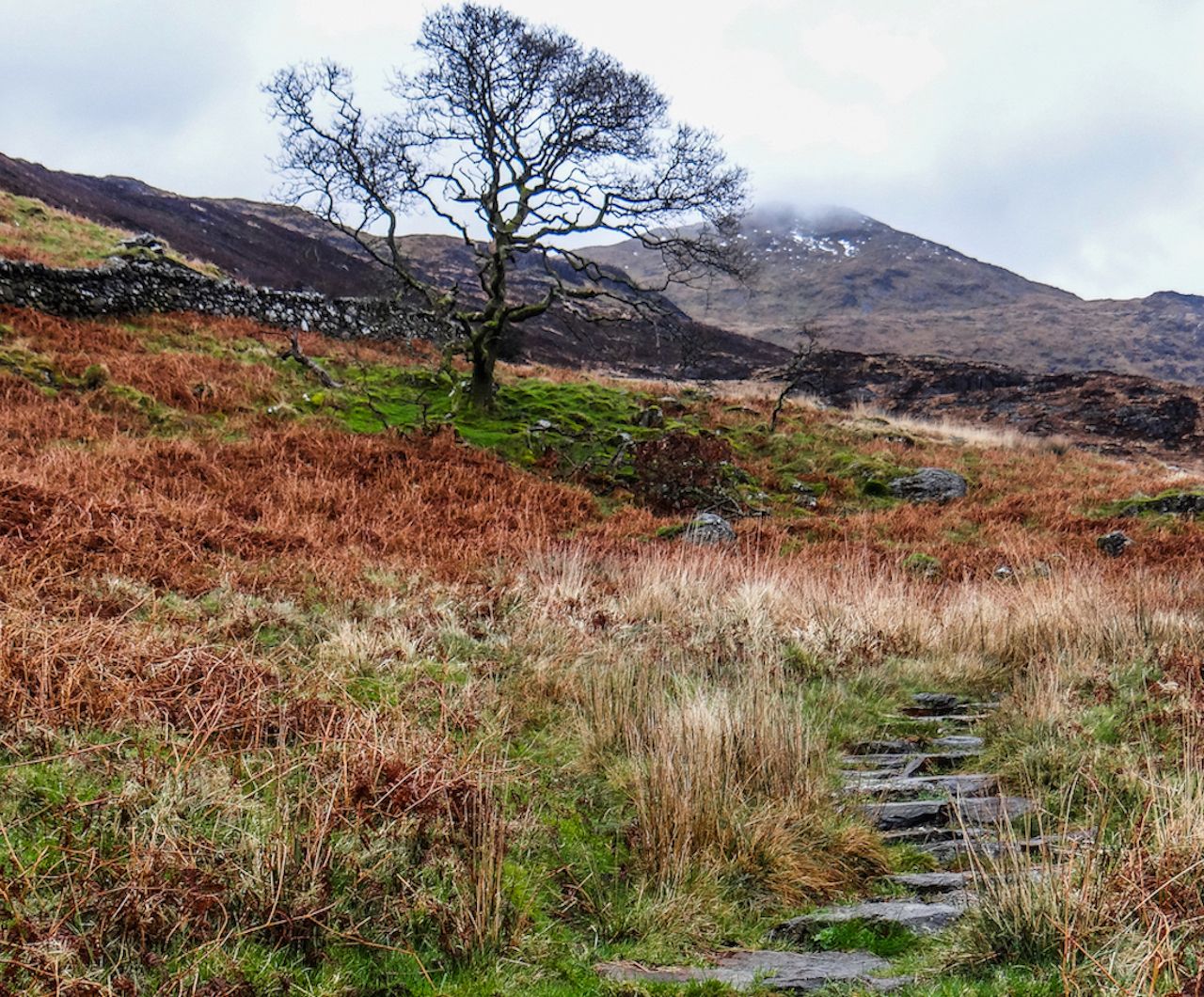 Especially if you’re a big fan of Disney’s animated Sword in the Stone, your favorite Arthurian character might not even be Arthur himself. Merlin, the wonky magician, is one of the legends’ most colorful characters, and though he is often shrouded in mystery, Dinas Emrys in Wales is hugely important to the character’s origins.

Located in Gwynedd in northwest Wales, this rocky hill was the place where Merlin is said to have been born amid pretty magical circumstances. Upon his birth, a white and red dragon who lived in Dinas Emrys fought each other, and the red dragon was later adopted as the national symbol of Wales. Visitors today won’t exactly be able to see the scorched earth of the dragon fight, but they can check out the remains of a stone tower built there in the 12th century, which has sweeping views of Llyn Dinas lake in Snowdonia. 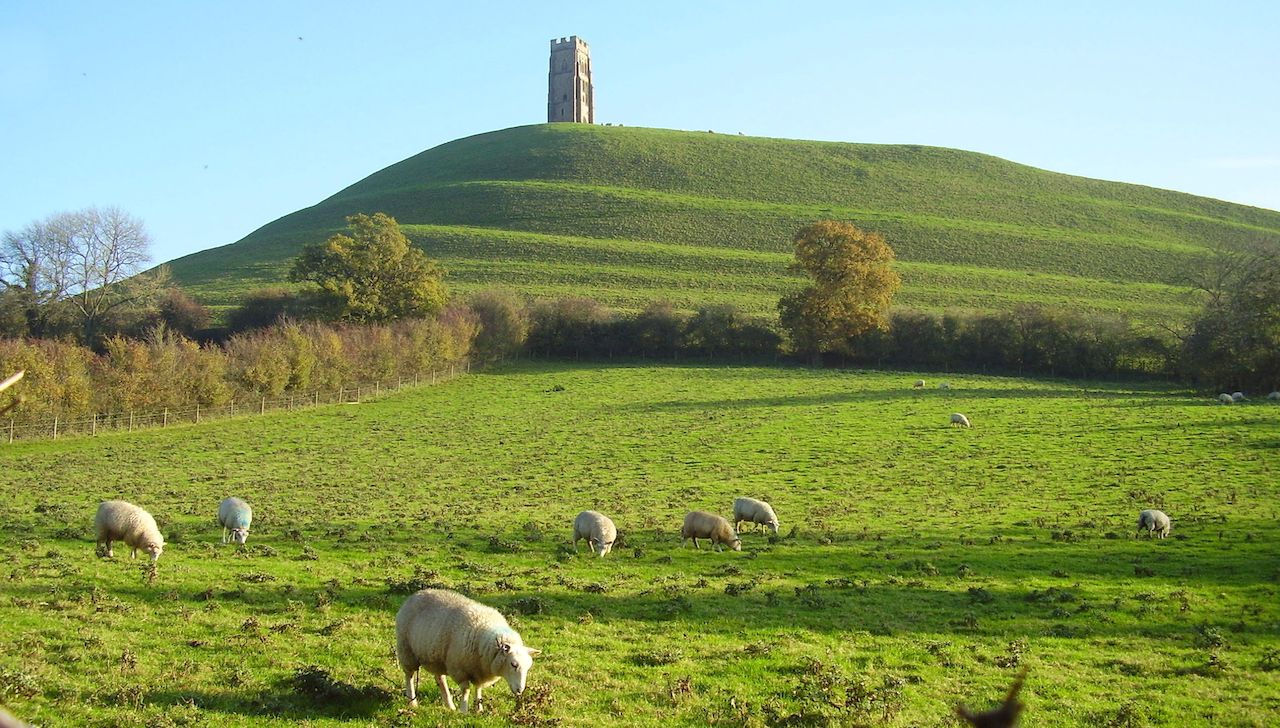 There’s no more fitting end to your King Arthur tour of the UK than the place where King Arthur himself was buried — at least, allegedly. After Arthur was fatally wounded at the Battle of Camlann, he was brought to Glastonbury Tor — otherwise known as “Avalon” — where healers attempted to save him. The Tor is a hill near Glastonbury, capped by St. Michael’s Tower. The healers failed to save the king, and he was buried on the south side of the Lady Chapel at Glastonbury Abbey, located right at the bottom of the hill. Guinevere was buried there too, when she died years later.

The remains of Glastonbury Abbey can still be visited today, and a small plaque marks the spot where the royal couple is supposedly buried. But this area is more than simply a graveyard. Right next door you’ll find the Chalice Well Gardens, so named because it’s the alleged burial place of the Holy Grail. The waters here run red, and legend holds that drinking from them has a rejuvenating effect, making it the perfect end to your King Arthur adventure through the UK.