It’s not Carnival season in Louisiana without king cake. The sweet dessert is filled with a cinnamon-sugar dough, and the outside is layered with purple, green, and gold icing — the traditional colors of Mardi Gras. Inside every cake is a plastic baby, which is a symbol of luck and prosperity (although whoever gets the slice with the baby has to provide the cake for the next year).

Today, you can find king cakes pretty much anywhere in the US from Epiphany in early January up to Mardi Gras in March. That means even if you don’t get the chance to go to New Orleans and hit Bourbon Street’s best bars to celebrate — and cure the inevitable hangover with the best brunches in New Orleans — you can still get a taste of the party when it comes to cake eating. For the best of the best in king cakes, however, nowhere does it like Louisiana. These are the best king cake bakeries in Louisiana to try this Carnival season, many of which ship worldwide. 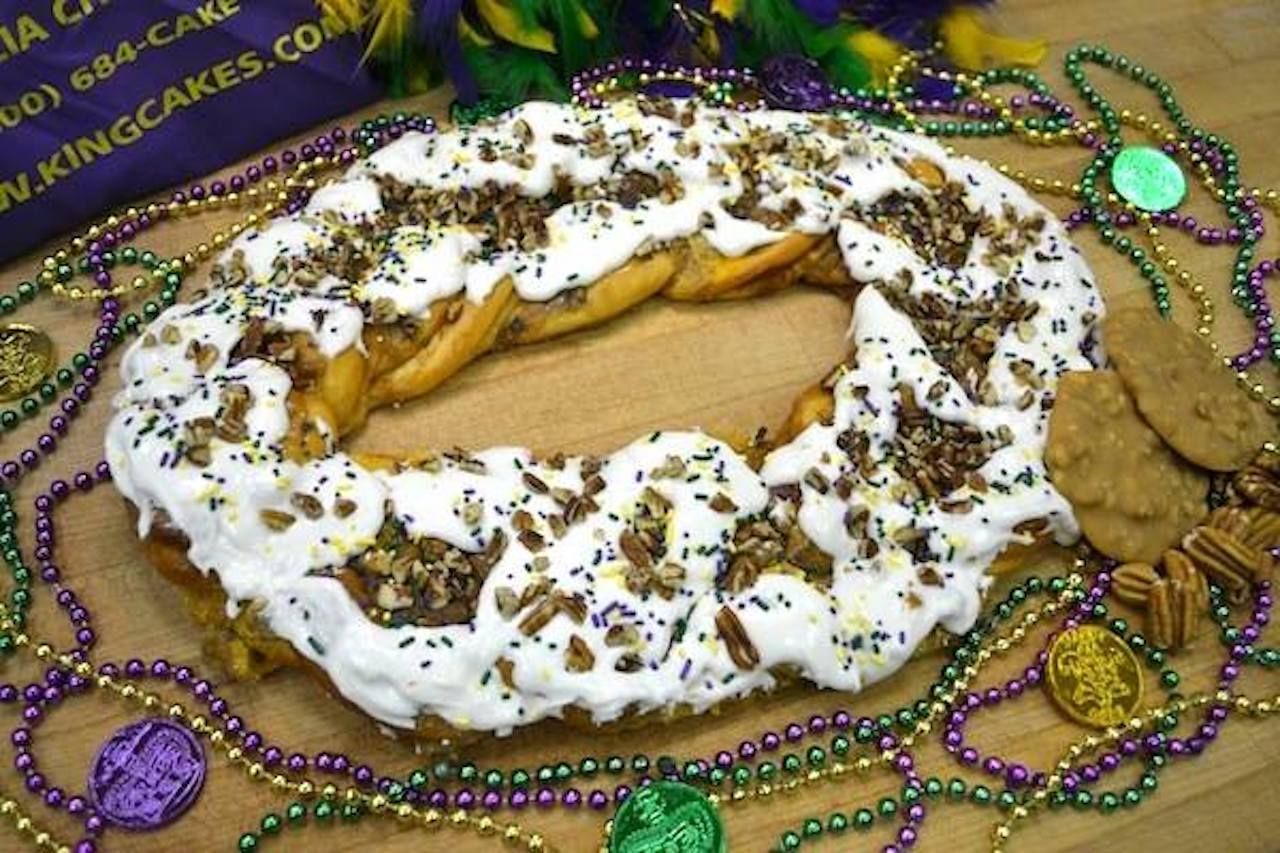 Randazzo’s Camellia City Bakery dominates the king cake scene, and it’s not afraid to show it (just look at the bakery’s website URL, kingcakes.com). The bakery makes thousands of cakes by hand each year, from the kneading of the dough to the packing. Its cream-cheese-filled king cake is among the best, but if you’re looking to go above and beyond, pay a few bucks extra for the pecan-praline filling.

Manny Randazzo King Cakes in Metairie is part of the same Randazzo family as Randazzo’s Camellia City Bakery. The family truly knows its cakes, and Manny Randazzo’s has earned a reputation as one of best king cake makers in the New Orleans area. The business started as a full-service bakery in 1992 but devoted itself solely to king cakes in 1995 and hasn’t looked back since. The Pecan Praline King Cake won King Cake King during a blind taste test in 2012, and the Royal King Cake made with strawberry, lemon, and apple filling is perfect for the person who can’t decide on which flavor they want. 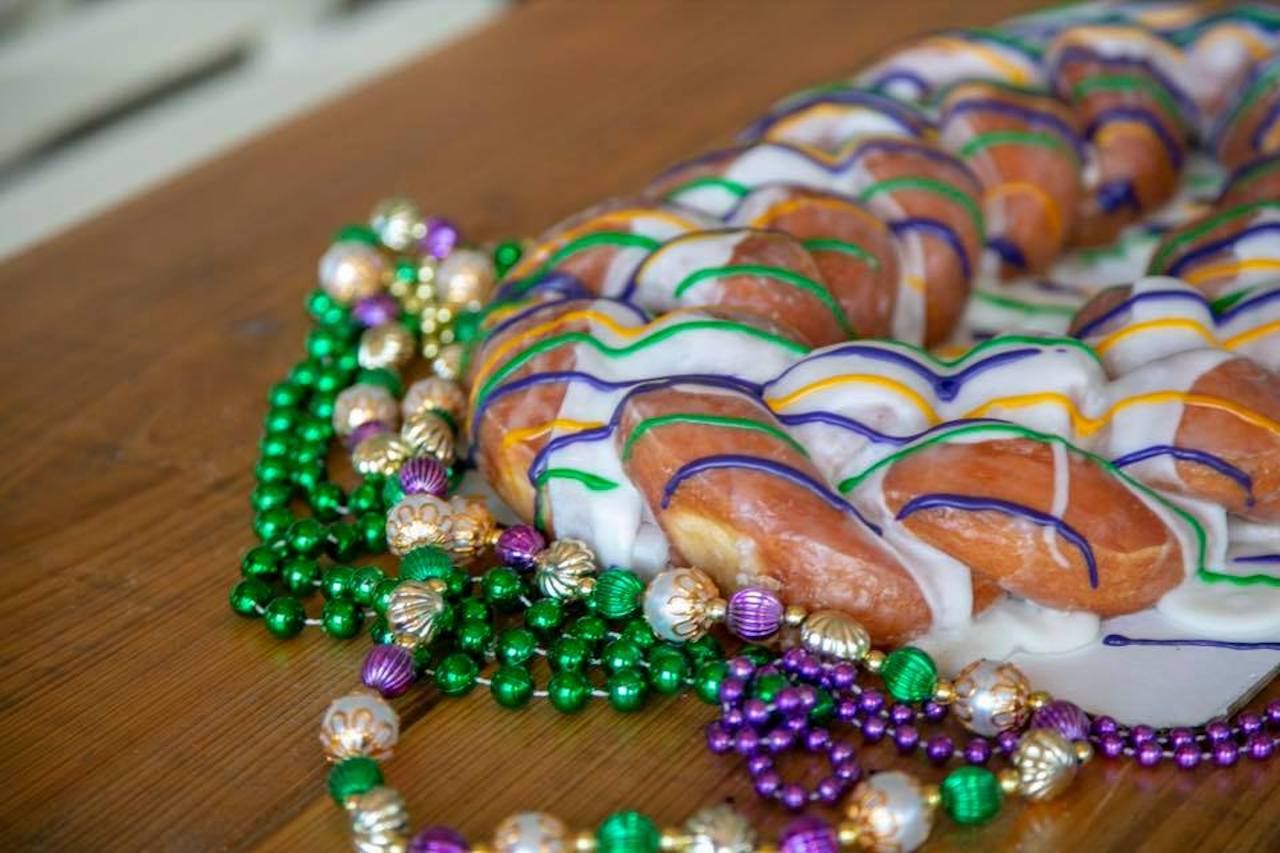 Cajun Market Donut Company lives up to its slogan, “Not Just Donuts.” This bakery opened in 2014 and puts out king cakes fresh every day from January to Mardi Gras. If you’re looking for something a little different, Cajun Market Donut Company turns the traditional king cake on its head with a turtle version made with cinnamon, chocolate, pecans, and caramel with your choice of cream cheese or Bavarian cream.

For decades, when New Orleans locals talked about king cakes they were talking about the ones from McKenzie’s Bakery. The simple cake had bright purple-, green-, and gold-colored sugar and won the hearts of many before the shop closed for good in 2001. All is not lost, though. Tastee Donuts, a onetime rival, purchased McKenzie’s king cake recipe and now sells the classic cakes in shops around the New Orleans area, including a version made with McKenzie’s famous buttermilk drops. The bad news? You can only buy them in person. The good news? Another reason to visit New Orleans. 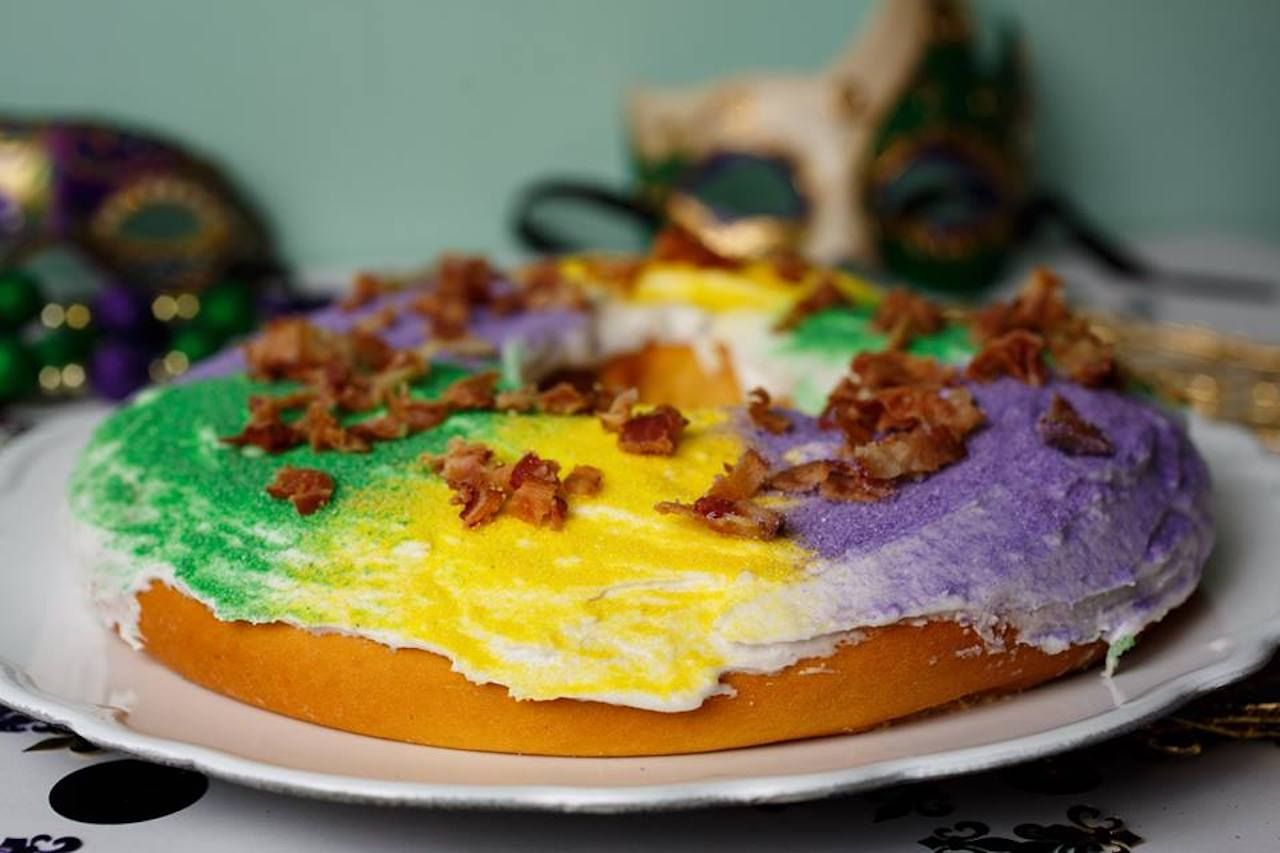 Shreveport’s Lilah’s Bakery has developed quite the reputation for its king cakes since opening in 2006. Owner and head pastry chef Sopan “TK” Tike grew up in Mumbai, India, and worked as a pastry chef at a hotel and for Carnival Cruise Lines before moving to Louisiana in 1997. He and his wife now make what has become one of Shreveport’s best king cakes. From bananas foster to black forest and even maple bacon, Lilah’s has a king cake for just about everyone.

Located in the state capital of Baton Rouge, Ambrosia Bakery opened a small storefront in 1991. It’s since upgraded and expanded (twice) while still pumping out signature cakes and desserts. The Ambrosia Bakery has a trademarked cake called the Zulu King Cake, which blends coconut, cream cheese, and chocolate in a sinfully delicious cinnamon and sugar dough and is then topped off with more chocolate and toasted coconut. If you’re not up for tackling a large portion, or just want a personal to-go, it comes in three sizes from mini to large. 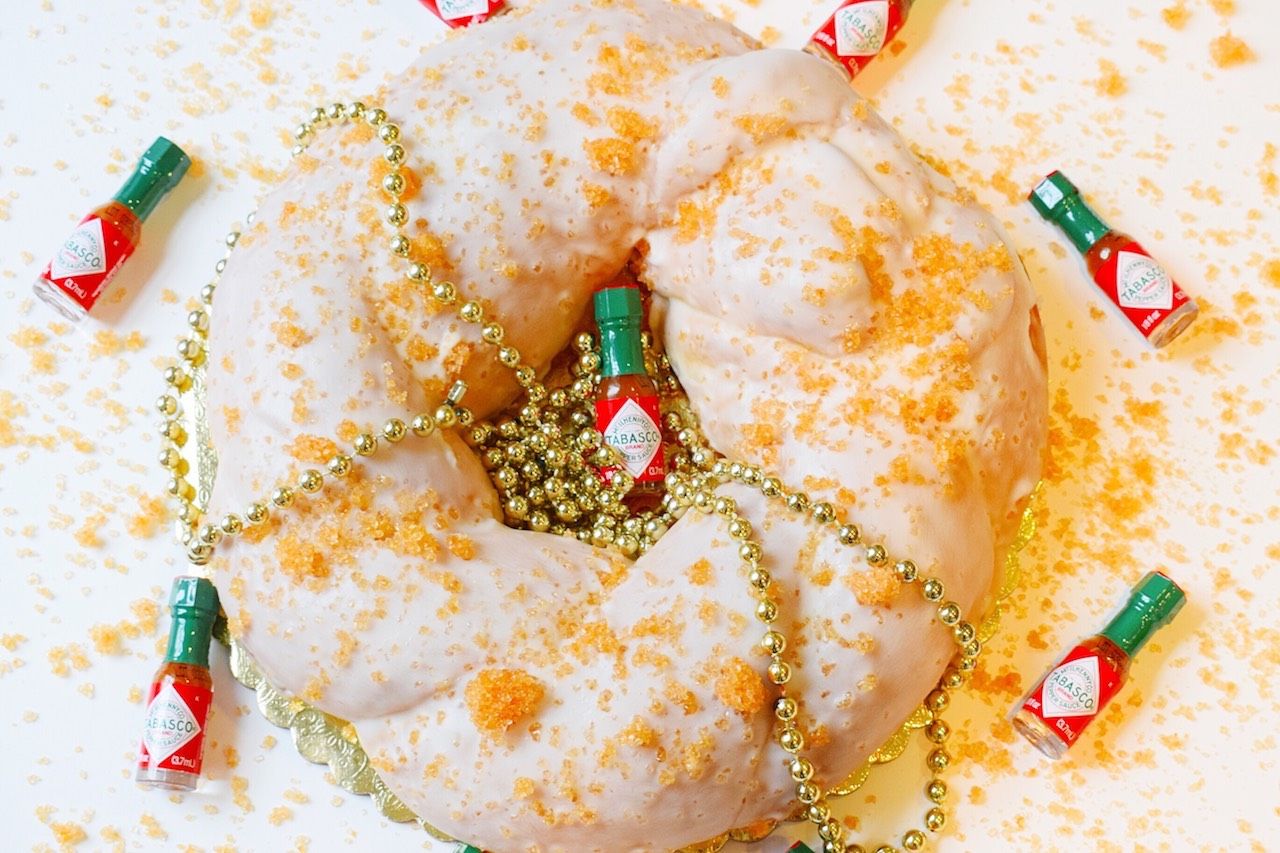 Sucré makes a king cake that’s almost too beautiful to eat — almost. The bakery is named for the French word for sugar, which is all too appropriate. Sucré’s big draw is the King Cake Bundle made up of two cakes. The first cake is the Sucré King Cake, made with a buttery brioche dough that’s sweetened with cinnamon and sugar, filled with whipped crème cheese, and topped off with Sucré’s gorgeous signature glaze. The second is the Sucré Sugar + Spice King Cake that’s made with that same sweetened buttery dough, filled with Swiss chocolate and whipped cream cheese filling, and then accented with Tabasco habanero sauce.

You don’t have to wait until king-cake season to get a king cake from Caluda’s, but there’s hardly a better time to go out of your way to try one. In addition to the traditional king cake, Caluda’s Bakery in Harahan also offers a new flavor each week. Flavors for 2019 include Oreo cream cheese, chocolate chip cookie dough, and white chocolate bread pudding. 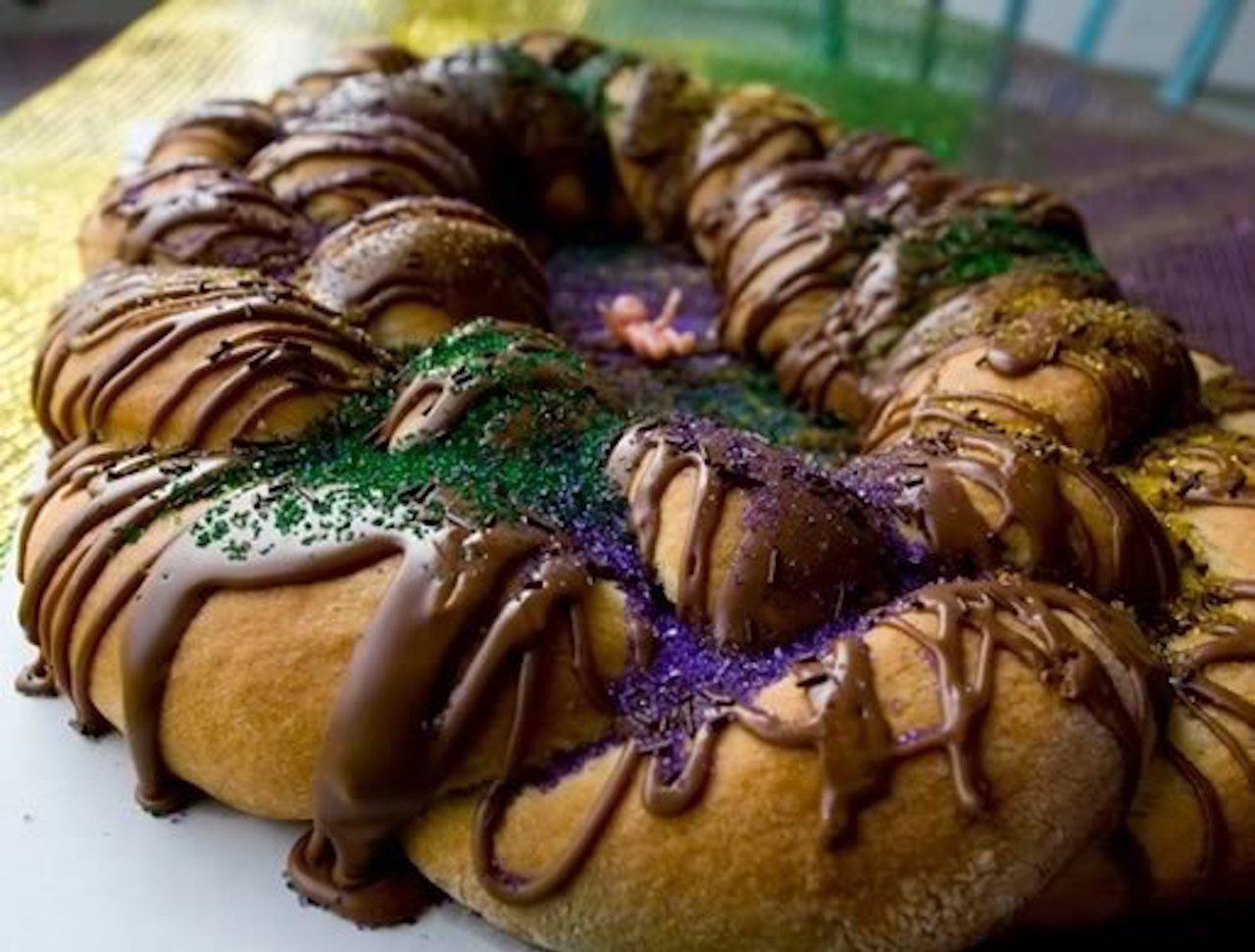 Cheryl Scripter opened Bittersweet Confections in 2002 as a chocolate shop focused on using as many local ingredients as possible. As the years went by, Scripter added more things to the menu, including the king cake. Try the original styles like the bourbon, satsuma, and pecan king cake. Whatever you do, don’t miss the chocolate king cake (made with brioche, chocolate cream cheese, dark chocolate ganache, and sand sugar), which has won numerous awards as best king cake in New Orleans.