New Orleans is, in every way, the city that most embraces that high-low bar life. Not just in Louisiana but in the whole United States. You can drink at a gilded cocktail haven where storied classic cocktails were invented, then stumble outside for a hurricane cocktail consumed right there on the street — yes, it’s legal to drink on the street here, which is obvious as soon as you arrive. While almost all New Orleans bars embrace the rowdy lifestyle, nothing quite exemplifies this dichotomy like Bourbon Street, which is smack in the middle New Orleans’ French Quarter.

This French Quarter is both the city’s most famous and its oldest neighborhood, while New Orleans Bourbon Street is the main draw for partiers. It’s lined with strip clubs, dives, and live music spots. Some are worth your time, many others are not, but the street itself is something to experience. Bourbon Street was first laid out in 1721 and is named after the royal French Bourbon family. It stretches the 13 blocks between Canal Street and Esplanade Avenue. Some choose to approach Bourbon Street with history in mind and dine and drink exclusively at centuries-old establishments. Others choose the bars with the loudest bands. Both have plenty of options to choose from.

Regardless of how you look at it, though, you’re doing Bourbon Street wrong if you’re only going to one bar. Bars on Bourbon Street are crowded close together, making it easy to bar hop all night long. Take advantage of being able to walk place to place with a drink in hand. These are the 14 bars on Bourbon Street that you must go to at least once.

Quick note on selection: Only bars physically located on Bourbon Street, not the broader French Quarter, were considered. Since this is a town with plenty drinking history and passion for beverages, there will surely be some strong opinions about what is left off. These are simply the most essential Bourbon Street bars to visit — feel free to argue with us, but only after we’ve had a Hand Grenade. 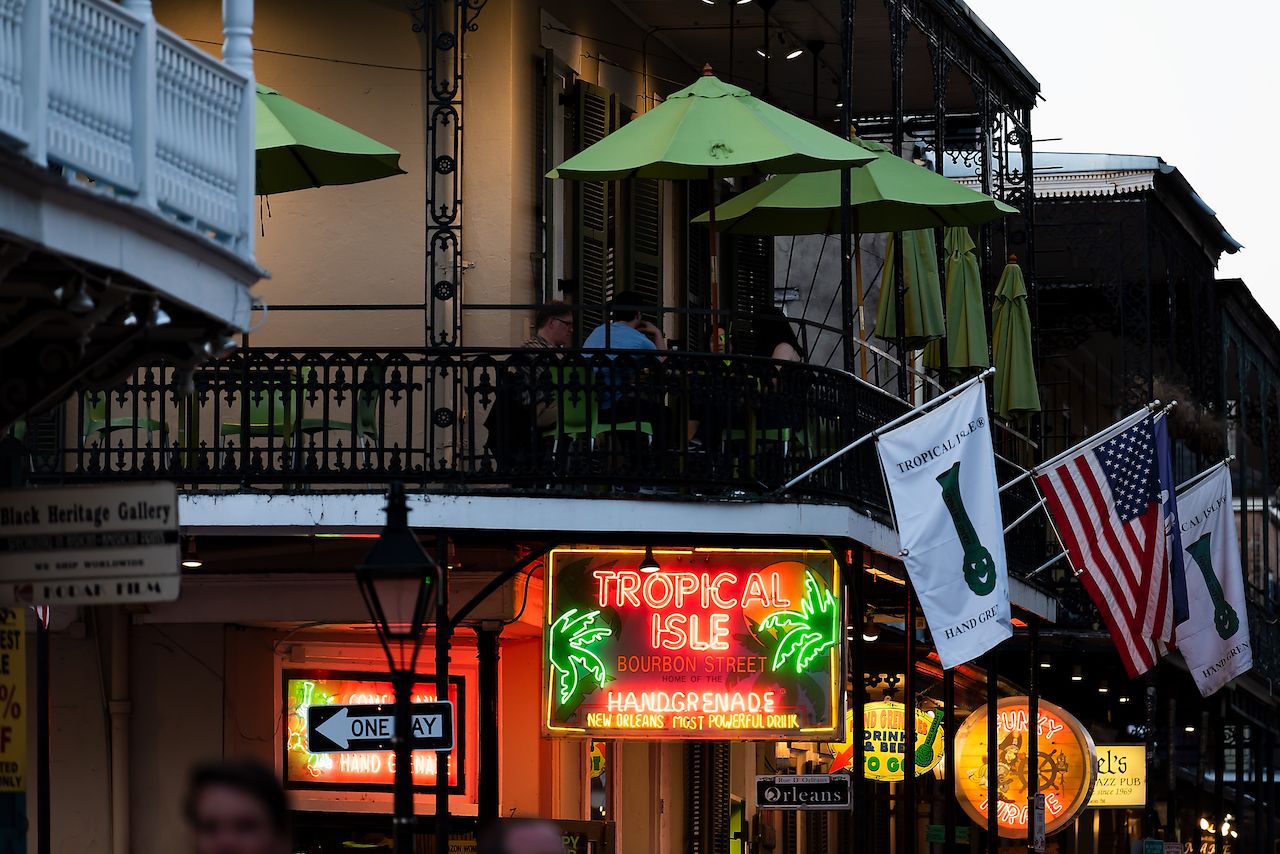 Other than the Hurricane, NOLA’s most famous oversized and overly strong drink is the Hand Grenade. There’s only one chain of bars where you can legally get a true Hand Grenade (seriously, it’s trademarked and aggressively policed) and that’s Tropical Isle. The bar’s tagline is, “Where the fun begins and memories last forever,” but do yourself a favor and only have one Hand Grenade if you want to keep those memories. There’s a livestreaming webcam at the bar on the corner of Bourbon and Orleans, so you can show the world all of your great Bourbon Street decisions.

Think New York’s famous disco club Studio 54, but with an extra “4” and a distinct NOLA clientele. There’s a raised stage for regular live music (rhythm and blues is proudly highlighted on the bar’s entryway sign), and the drinks are intended to keep you dancing. You’ve got to find something to do with all the energy from those sweet cocktails, after all.

3. The Beach on Bourbon 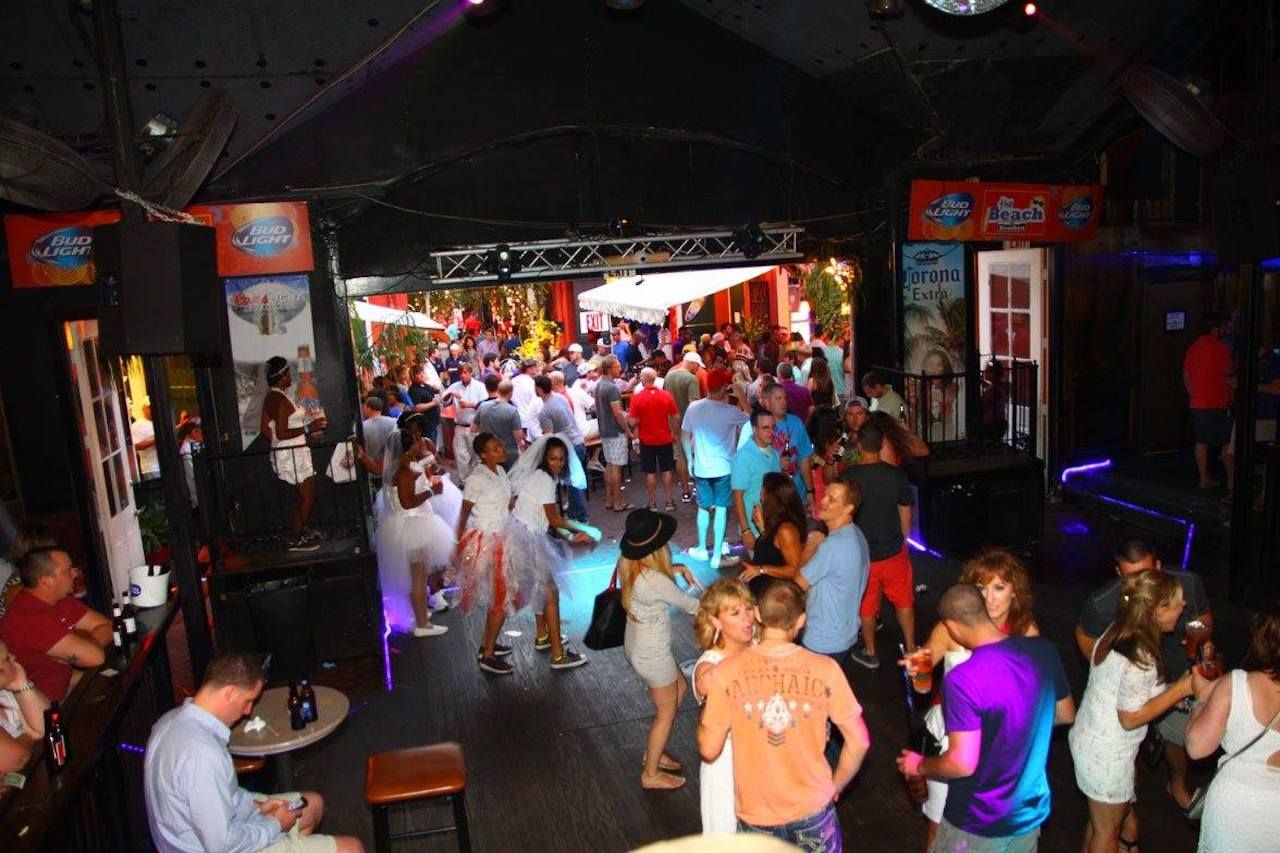 Photo: The Beach On Bourbon/Facebook

Not a literal beach, but New Orleans is one of those places where you can turn a place into whatever you want it to be. The Beach on Bourbon claims to have the largest dance floor out of all the bars on Bourbon Street. If you’re feeling like catching the vibe without dealing with the crowd of people dancing downstairs, head up to the VIP balcony section on the second floor. The Beach on Bourbon is also a place to catch a sports game on one of the multiple TVs. Come prepared on game days, because New Orleans is very much a sports town.

Open 10 AM to 3 AM, Bourbon Pub and Parade is a gay bar that’s been open since 1974. Downstairs is the “pub” part while upstairs is the “parade.” There are events and themes every night, including karaoke, drag shows, and Throwback Tuesdays with hits from the 80s and 90s. Screens stream music videos all night long on Fridays and Saturdays. 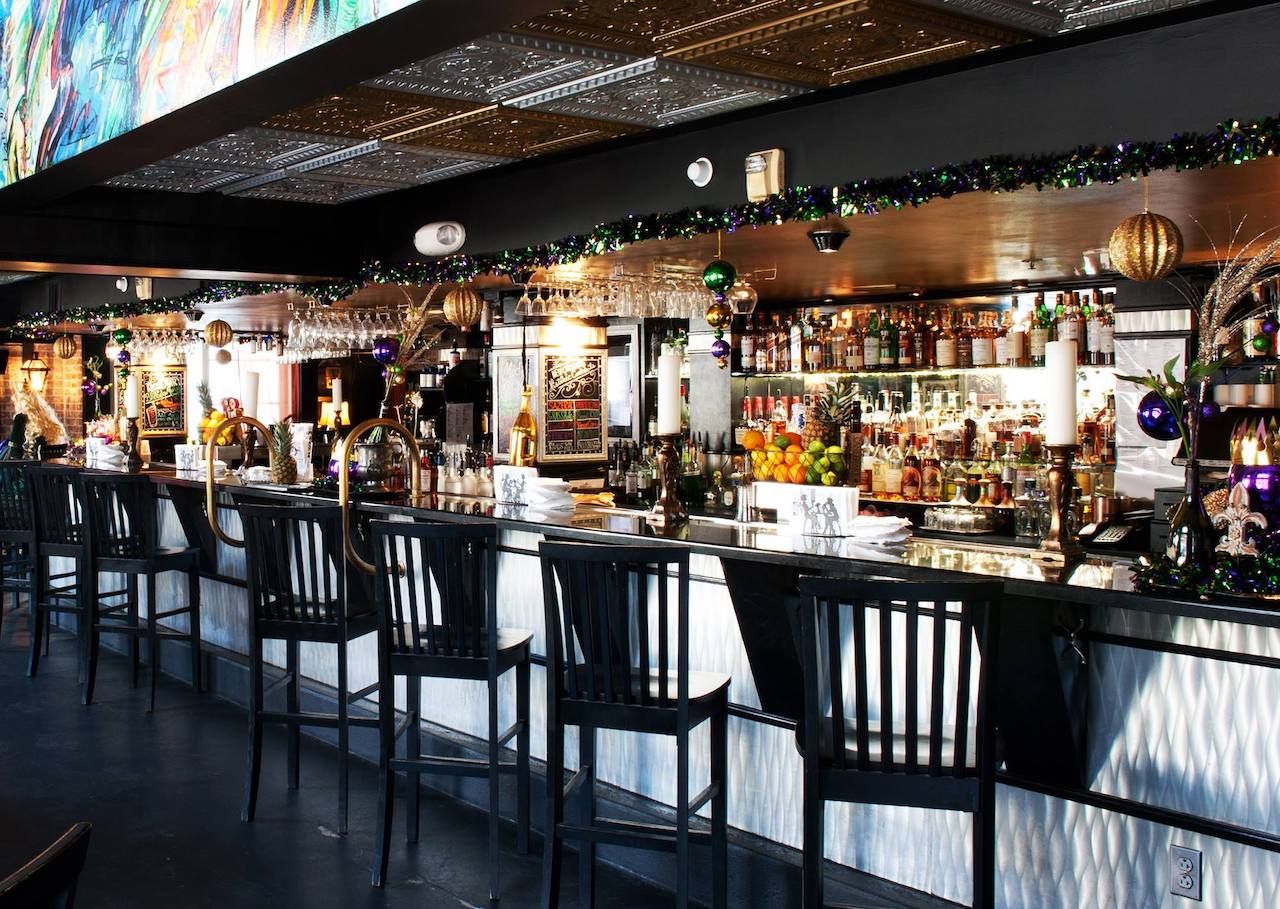 Get away from the cheap beer and cocktails made with sweet mixers for a bit at Bourbon O. It started using fresh-squeezed citrus and house-made ingredients in 2013, and the quality shows to this day. There is an impressive whiskey list and a healthy list of classic cocktails. This means that you’ll likely be paying more for the drinks than you will at any other bars along Bourbon Street, but it’s worth it. Live jazz music starts every night at 8 PM.

Opened in the 1930s by a boxing promoter who wanted to copy a Manhattan nightclub, the Famous Door quickly became known as the spot to go for New Orleans jazz. Its musical reputation lives on with cover bands that regularly fill the playbill, proving it’s still a fun bar to hit for music, dancing, and drinks. 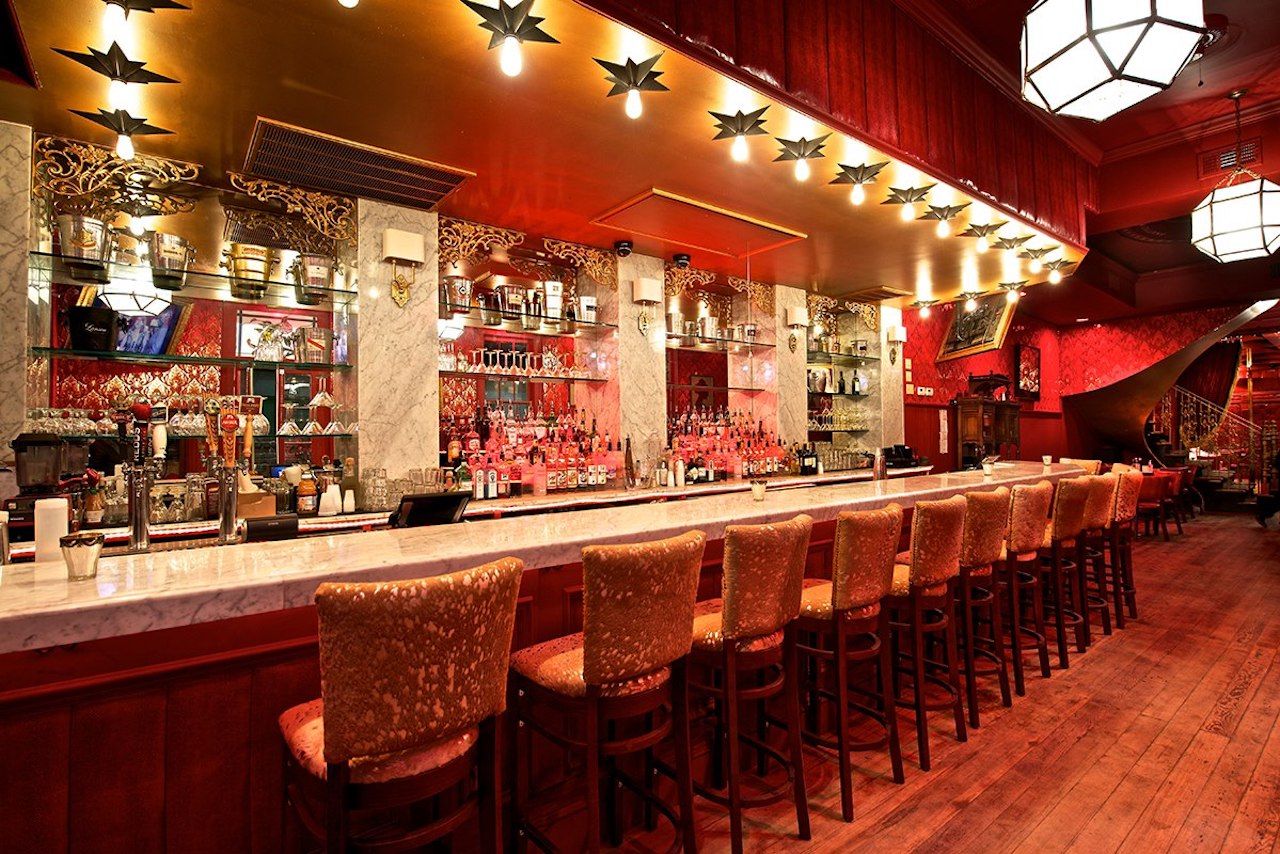 Channing Tatum’s bar Saints and Sinners has a lot less of a Magic Mike atmosphere than you may be hoping for, but it’s still worth a visit. It’s part bar, part restaurant, and an all-around enjoyable experience. It’s styled after old red-light district prostitute houses and burlesque halls (complete with red velvet), and a portion of the profits are donated to charities around the world.

Maison Bourbon offers live jazz shows, a rarity on Bourbon Street. In fact, it’s one of just two jazz bars on Bourbon, and calls itself the only “Dixieland Jazz Club” in the French Quarter. There’s no cover charge, and a cute courtyard in the rear of the club, where guests can drink and socialize in the open air. Refreshingly casual on the otherwise rowdy Bourbon Street, music lovers will find refuge at Maison Bourbon. 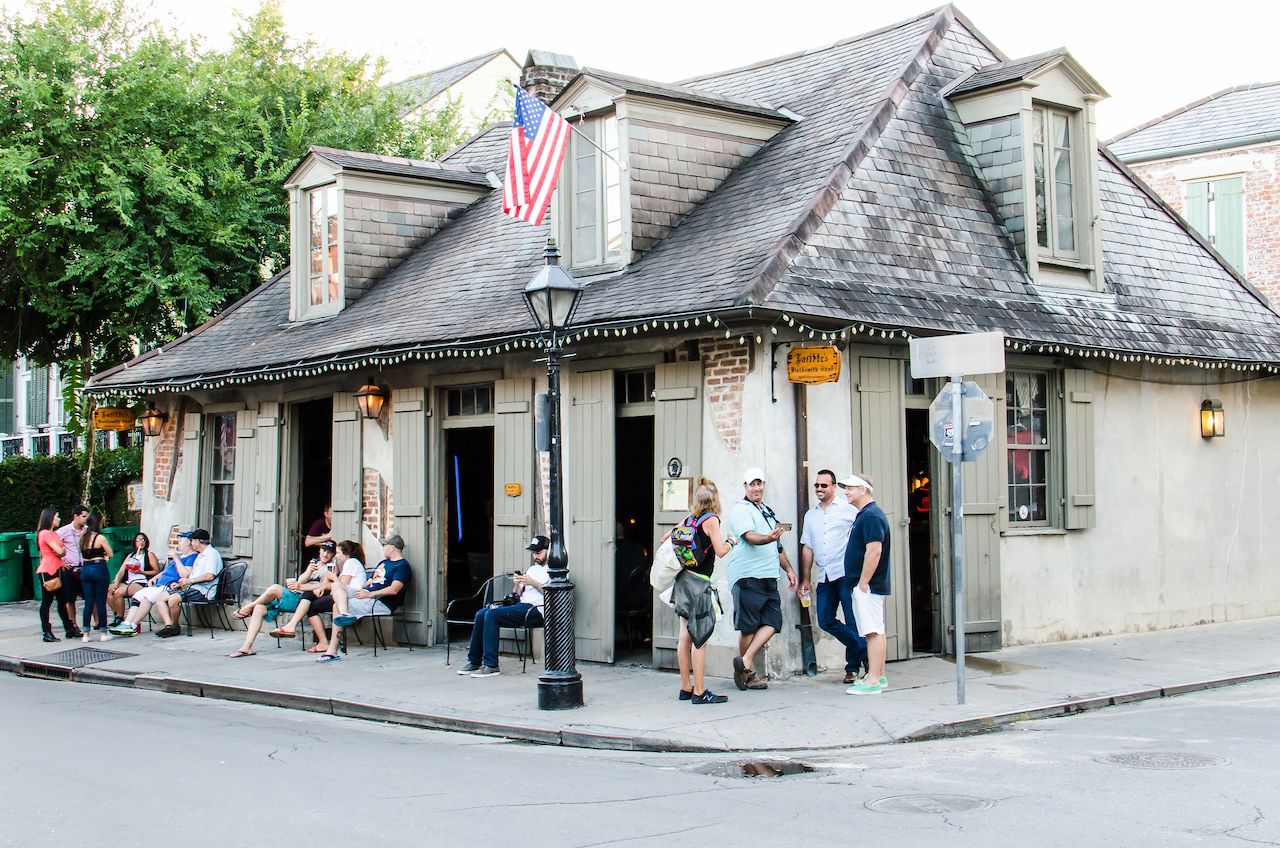 Lafitte’s Blacksmith Shop is allegedly the oldest building to house a bar in the country. The name comes from Jean Lafitte, a privateer and slave trader who, according to legend, used the building as a storehouse in the early 1800s. Today, it’s a dim and dank drinking hole. Take a trip into the past and order a beer or a simple mixed drink in a plastic cup. Be ready to adjust your eyes, though, as you’ll be drinking by candlelight.

There’s no shortage of strip clubs on Bourbon Street and in New Orleans in general. The vast majority of those only have women on stage. Not so at Oz. Oz is a gay dance club with live strip shows, a balcony bar, and nightly events like drag shows and comedy shows. It’s also open 24/7. 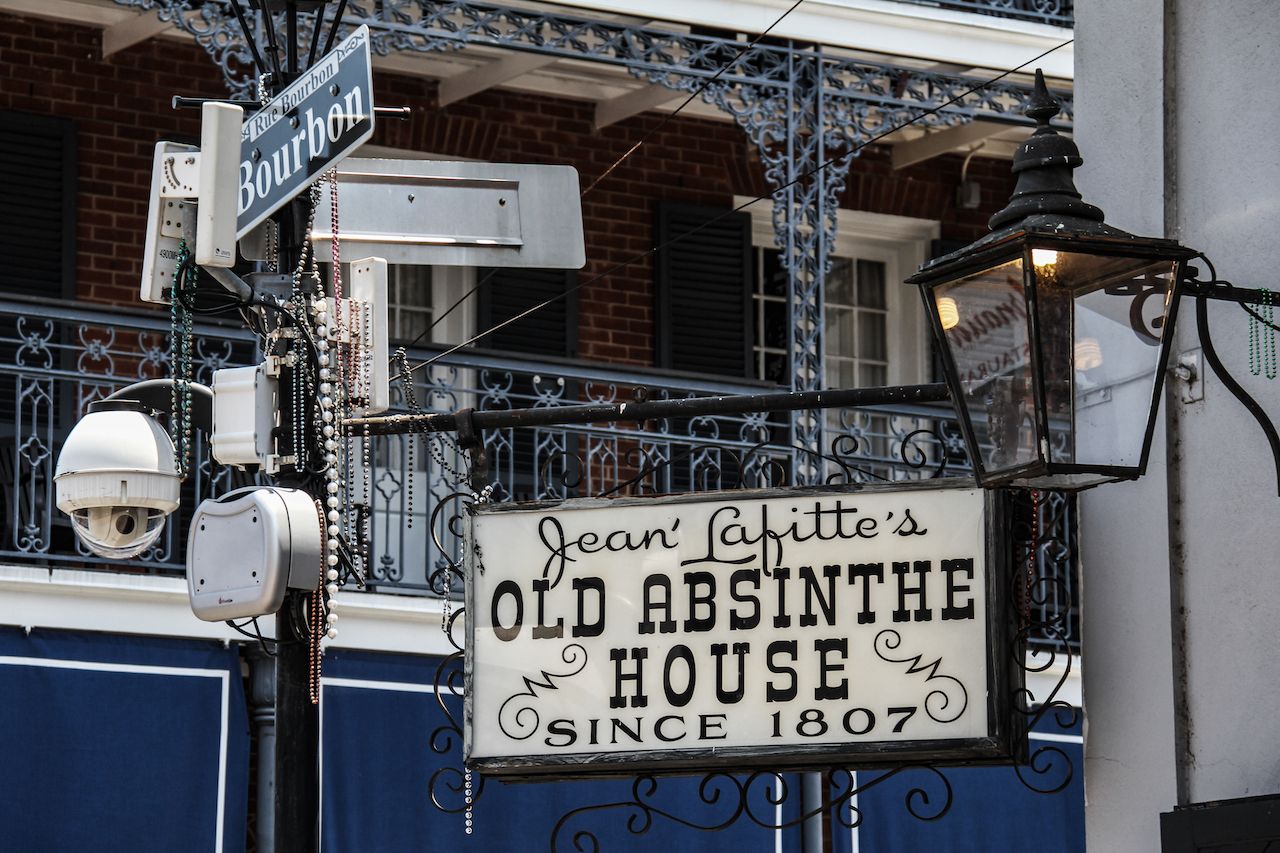 The Old Absinthe House has been around since 1807. It, Lafitte’s Blacksmith Shop, has a connection to privateer Jean Lafitte. According to legend, the bar is where Lafitte and Andrew Jackson negotiated a treaty to join forces against the British in the Battle of New Orleans during the War of 1812. There’s no record of what they drank, but the deal worked. The drink to get here is the signature Absinthe Frappe, which was invented in 1874 and quickly became a favorite among writers like Oscar Wilde and Mark Twain.

Since 1969, Fritzel’s European Jazz Pub has been inviting jazz players and jazz lovers from around the world. The food might not be anything to write home about and the drinks can be hit or miss, but you will stay for the live music. Just keep in mind it can get crowded during popular sets. 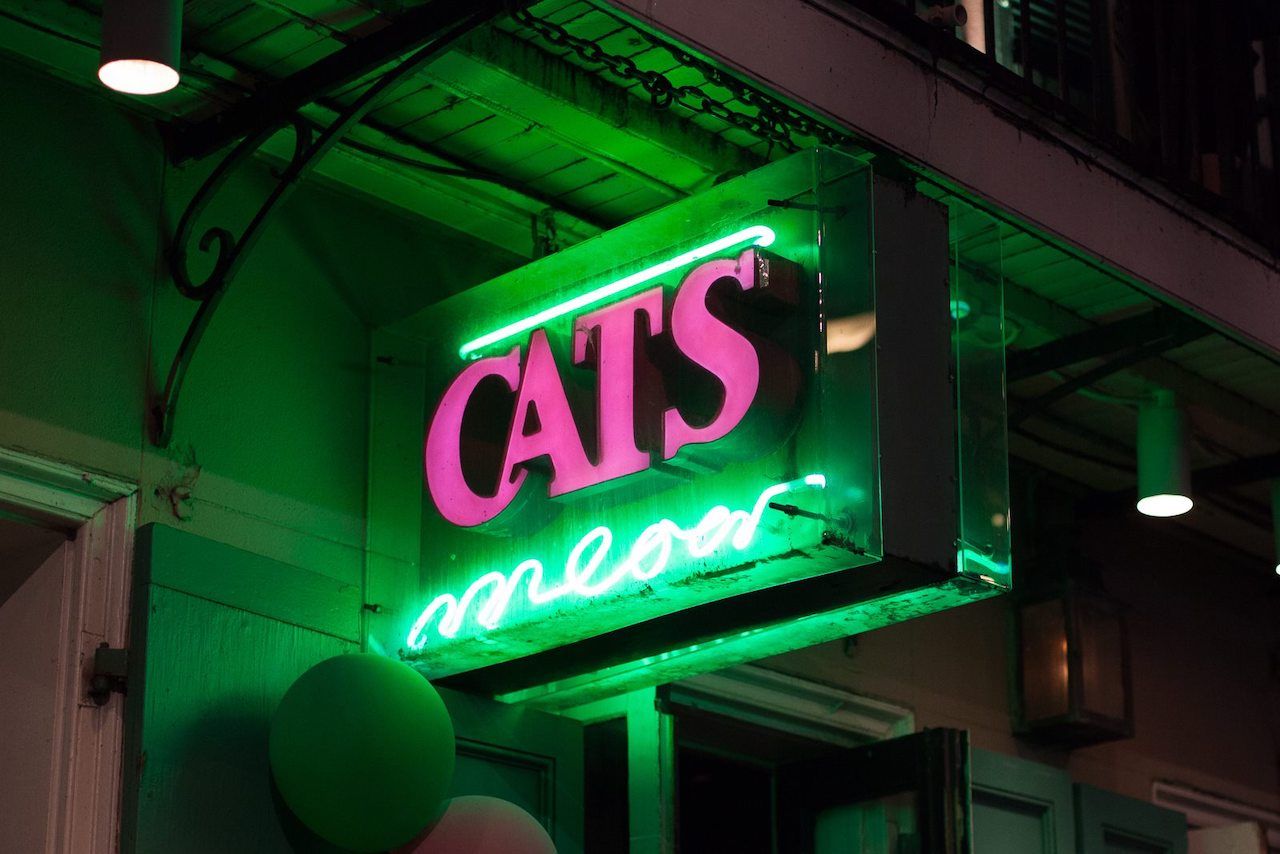 The Cats Meow has been around since the 1990s, and it’s become a karaoke institution. You make the music here — or someone else can, and this includes famous stops from the likes of Miley Cyrus, Charles Barkley, Seal, Weird Al Yankovic, Stormy Daniels, and more. Go early for the three-for-one happy hour offered every day from noon to 8 PM, which is just enough to get you through any bad singers.

Stop by to see the band B Street Benny. Bourbon Bandstand has live music or a DJ every night, as well as a regular happy hour and drink specials on the upper balcony bar. It’s rowdy both day and night, and the music is always set on “the hits.” Luckily, there’s plenty of room on the dance floor to show off all of your moves.

Why is Bourbon Street so famous?

Bourbon Street is famous because it’s concerned the birth place of jazz music. Iconic musicians such as Jelly Roll Morton frequented the jazz clubs on Bourbon Street, and there are still many jazz clubs lining this street where the crowds are boisterous and the music is loud. Today, Bourbon Street is just as famous for raucous partying. Crowds from the bars spill out into the street, shops sells frozen drinks that you can sip while you walk, musicians play on the side walk, and groups of friends dance in the street. Drinking outdoors and while on the move is probably one of the main qualities that makes Bourbon Street such a popular and iconic destination.

Is Bourbon Street safe at night?

Yes, Bourbon Street is safe. However, it’s important to be aware that people on Bourbon Street are rowdy. The drinks are abundant and flowing, and people go there specifically to let loose and release their inhibitions. You might find yourself avoiding groups how looked too drunk, but those people are easy to spot. It’s probably also smart to keep your wallet in a secure place, like you would in any other crowded destination. People are also throwing beads from the balconies so just be sure you don’t get hit in the head.

What is the best part of Bourbon Street?

Upper Bourbon is widely considered the best part of Bourbon Street. This is area where bachelor and bachelorette parties congregate around a large concentration of bars and strip clubs. You’ll also find plenty of small bars dedicated to selling Hurricanes and Hand Grenades to thirsty party people to take away on their adventures. Karaoke is another popular activity in this section of Bourbon Street.