New Orleans is known for serving generous portions of decadent food, but it’s one city where you should always leave room for dessert. The city’s favorite desserts say a lot about it: Some have cultural significance, such as Mardi Gras’ king cakes; some offer insight into the city’s international influences, such as NOLA’s iconic beignets; and others are just downright delicious. From celebratory eats to everyday treats, these seven dishes represent the very best of New Orleans’ desserts. 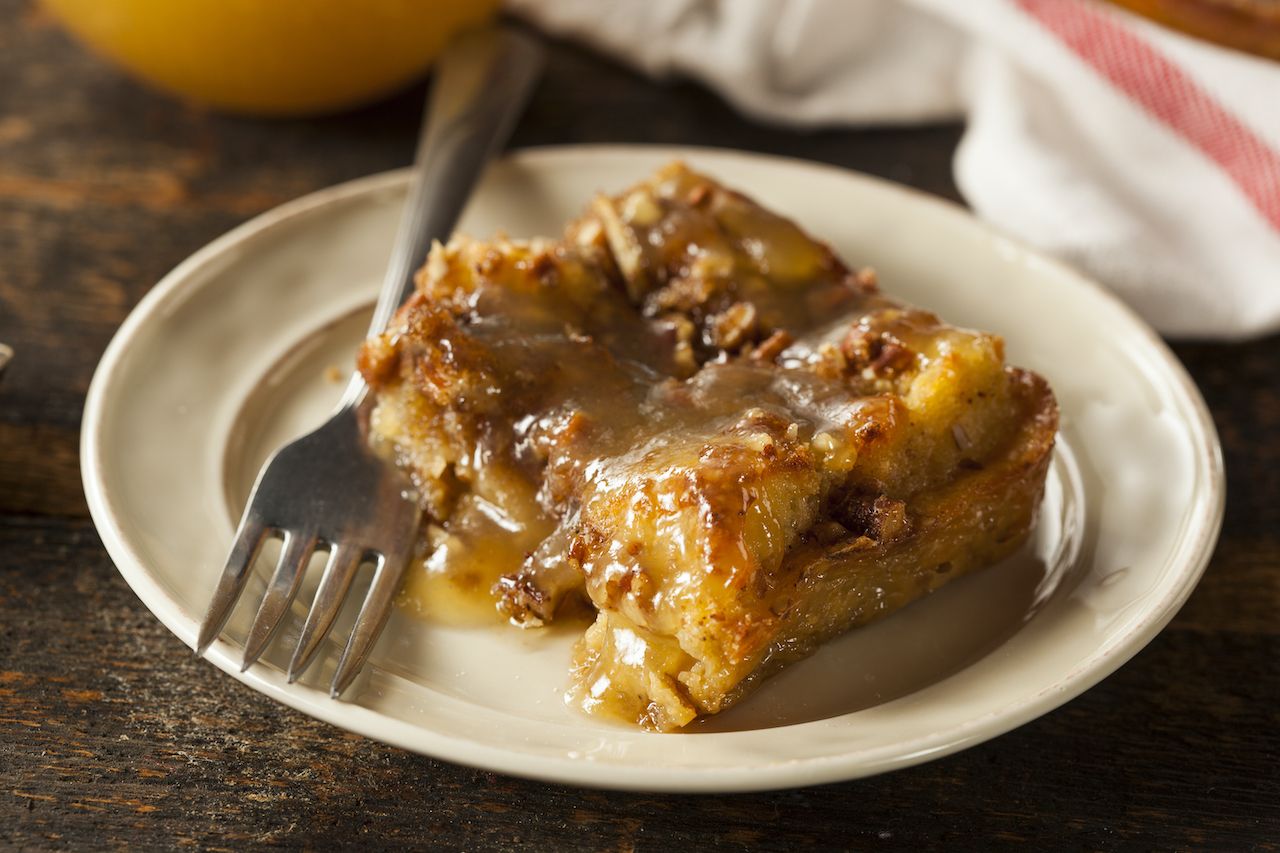 While bread pudding is not unique to New Orleans, many of the city’s restaurants have perfected their very own versions of this delicious use for stale bread. At its most basic, the dish involves drizzling melted butter over leftover bread chunks and baking it with sugar, cinnamon, vanilla, beaten eggs, and raisins. It’s usually served hot and soaked with rum or whiskey sauce. On the dessert menu at Commander’s Palace, a landmark New Orleans restaurant dating back to 1893, there’s a must-eat bread pudding soufflé that bills itself as the “Queen of Creole Desserts.” 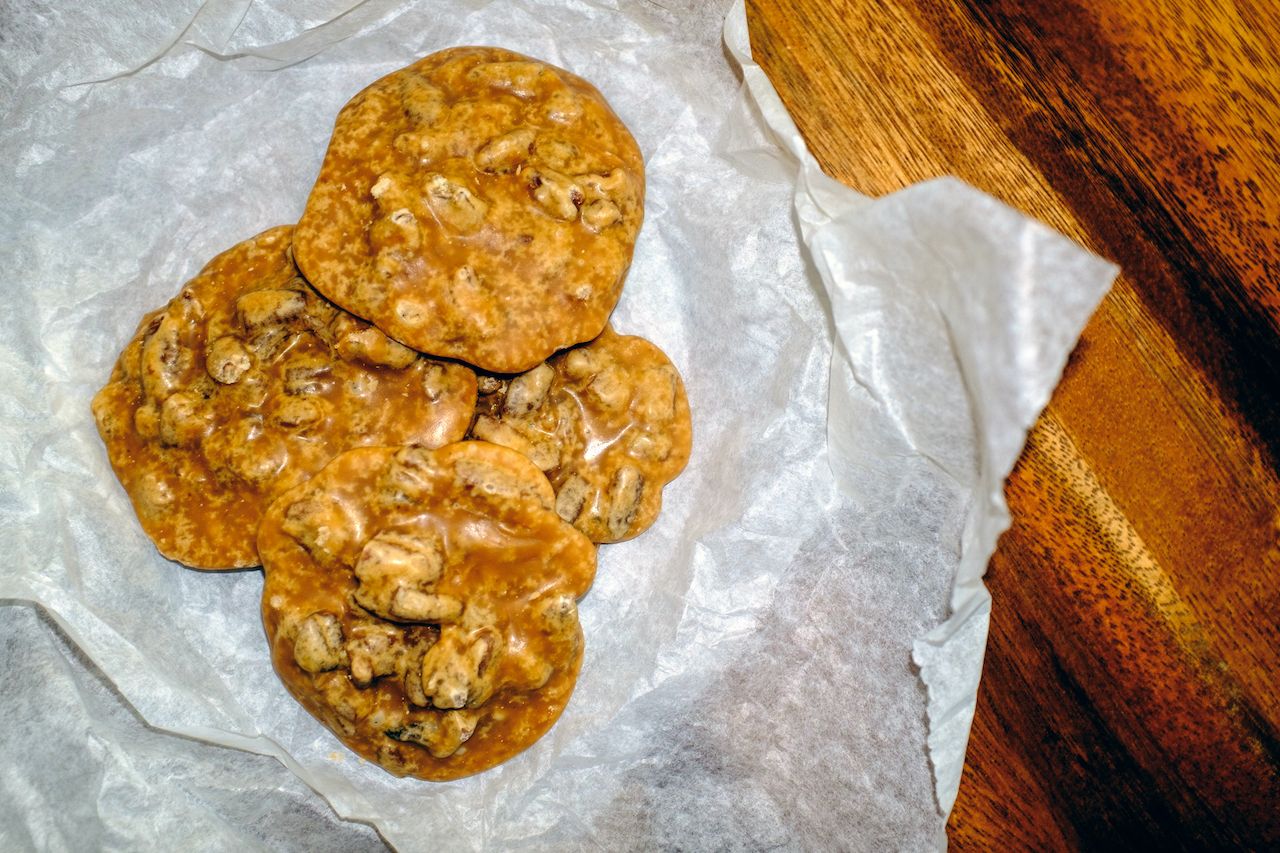 You can credit the French for introducing this candy, which is now ubiquitous in New Orleans, to the city. Pecans are suspended in a creamy mixture of sugar and butter that is so rich you probably can’t eat more than one. They’re available, usually wrapped individually, at many gift shops in the city and come in varieties like chocolate and rum. If you don’t want to sound like an outsider, say it “praw-leen.” 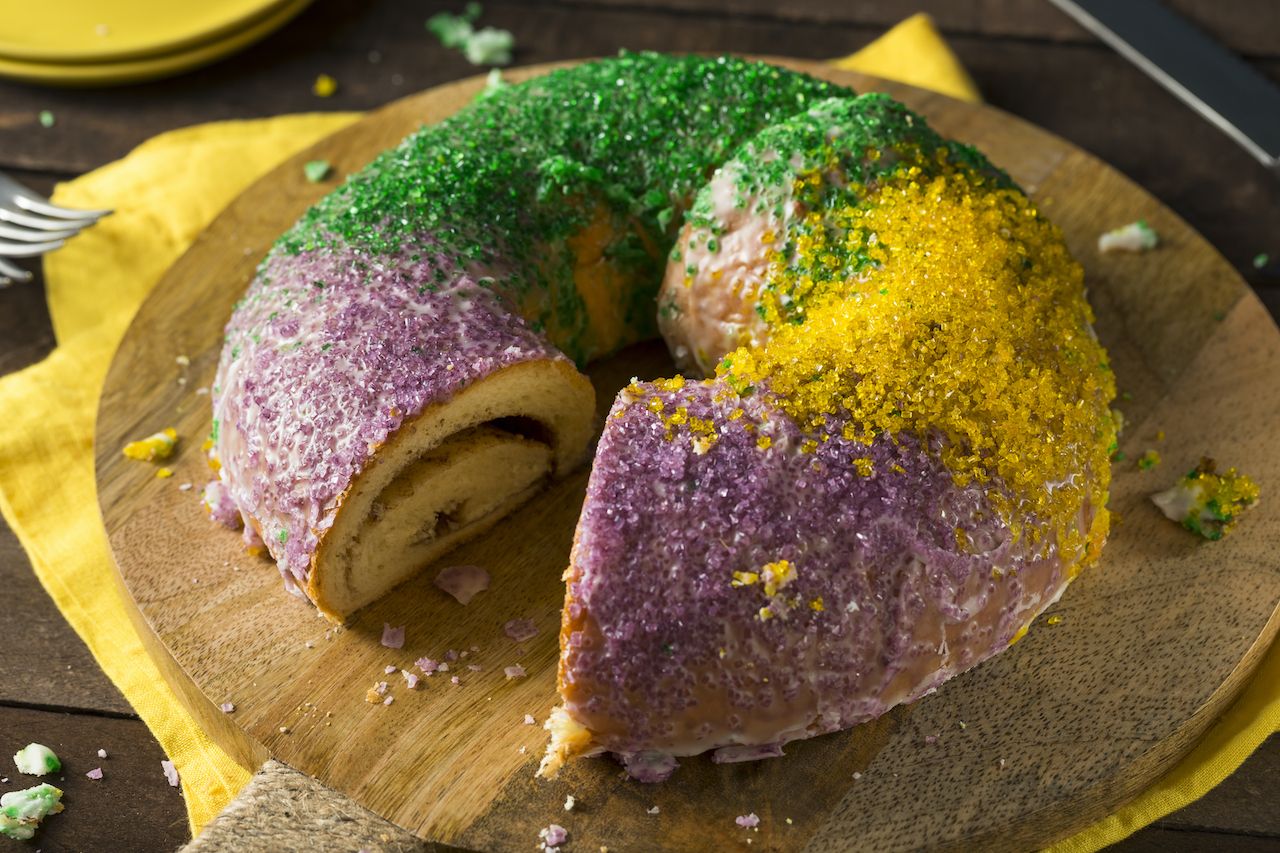 King cake is mostly eaten during Mardi Gras season, but you can find it any time of year if you look hard enough. There are many variations with different fillings, but a king cake is essentially a huge cinnamon roll with sprinkles that’s typically iced in Mardi Gras colors: purple, green, and gold. Most king cakes have a small plastic baby inside, said to represent the baby Jesus, as Mardi Gras has roots in Catholicism. As for where to get the best king cake in town, everyone has their favorite spot, but Haydel’s Bakery and Manny Randazzo King Cakes both have massive followings. 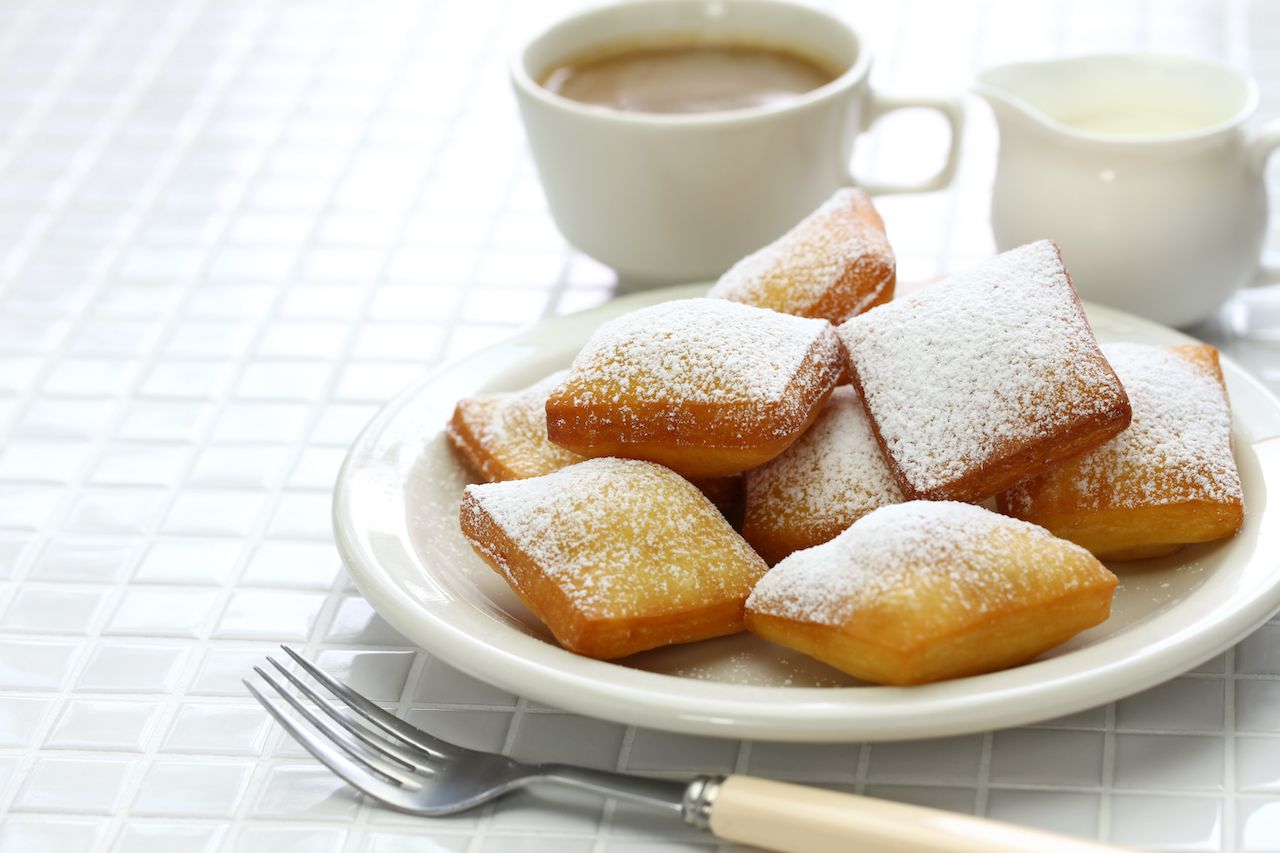 It’s pronounced “ben-yay,” which is French for fried dough. This dessert’s charm is in its simplicity, as it’s nothing more than deep-fried dough covered in a mound of powdered sugar. Get an “order” of three donuts with a cup of café au lait or chocolate milk. Some of the city’s most famous beignets are available at the bustling French Quarter tent of Café du Monde near the Mississippi River, but there are a few other spots where you can indulge on what many locals call “coffee and donuts.” Just don’t inhale when you take a bite. 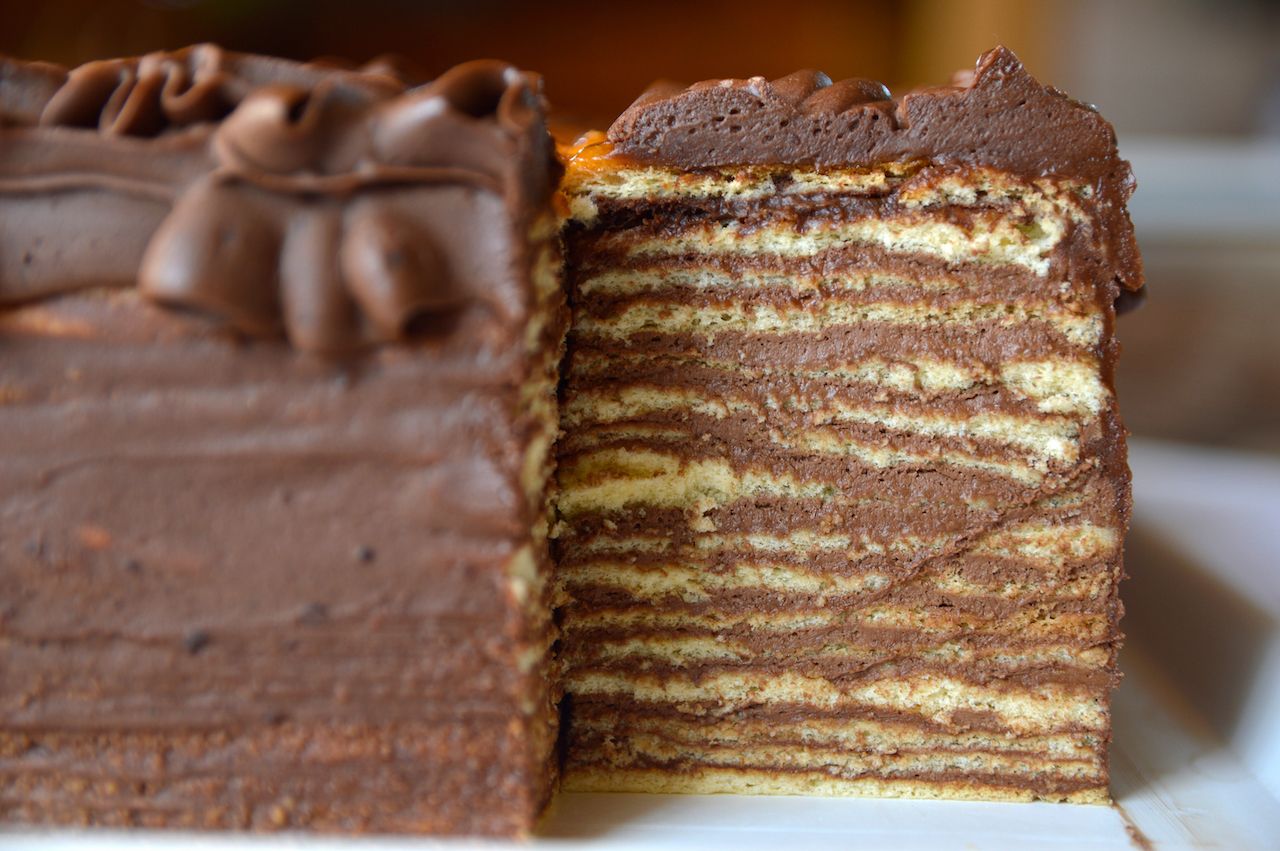 No New Orleans birthday is complete without a doberge cake. A New Orleans baker adapted the Hungarian dobos torta and gave it a French-sounding name, and doberge was born. The cake consists of multiple layers of cake and pudding–usually chocolate or lemon–topped with rich icing. Try it yourself at Gambino’s Bakery, a doberge cake mainstay for more than 50 years. Oh, and when you go to order, note that it’s pronounced “dough-bash.” 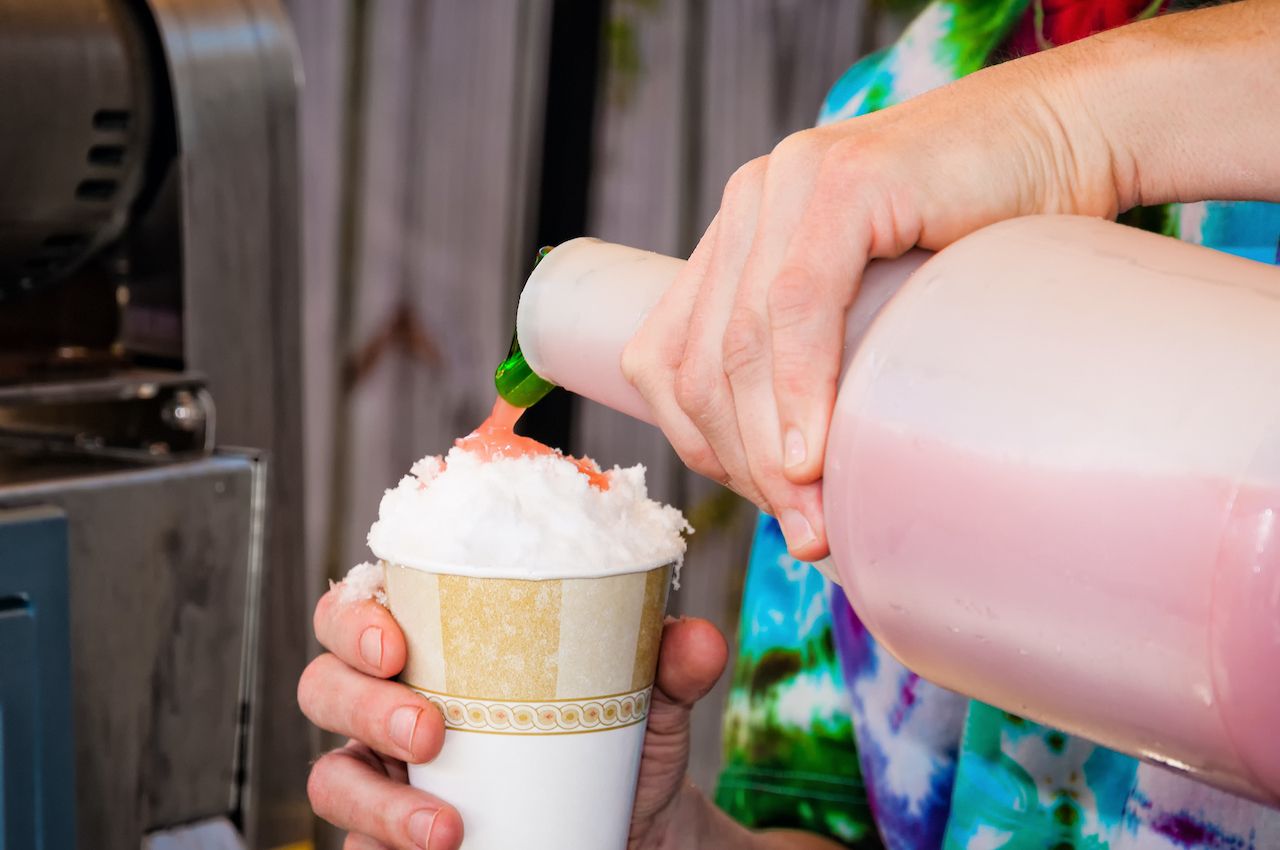 Snowballs — or snoballs — are definitely not the same as snow cones. Snowballs are like fresh powder, and the juice doesn’t sink to the bottom of the cup as it does with crunchy snow cones. The New Orleans-invented SnoWizard machines shave down blocks of ice for the perfect consistency. Come summer, snowball stands throughout the city are packed. Each offers dozens of flavors, from wedding cake to superman to margarita and more. You can get them “stuffed” with soft-serve ice cream or drizzled with condensed milk. Yum. 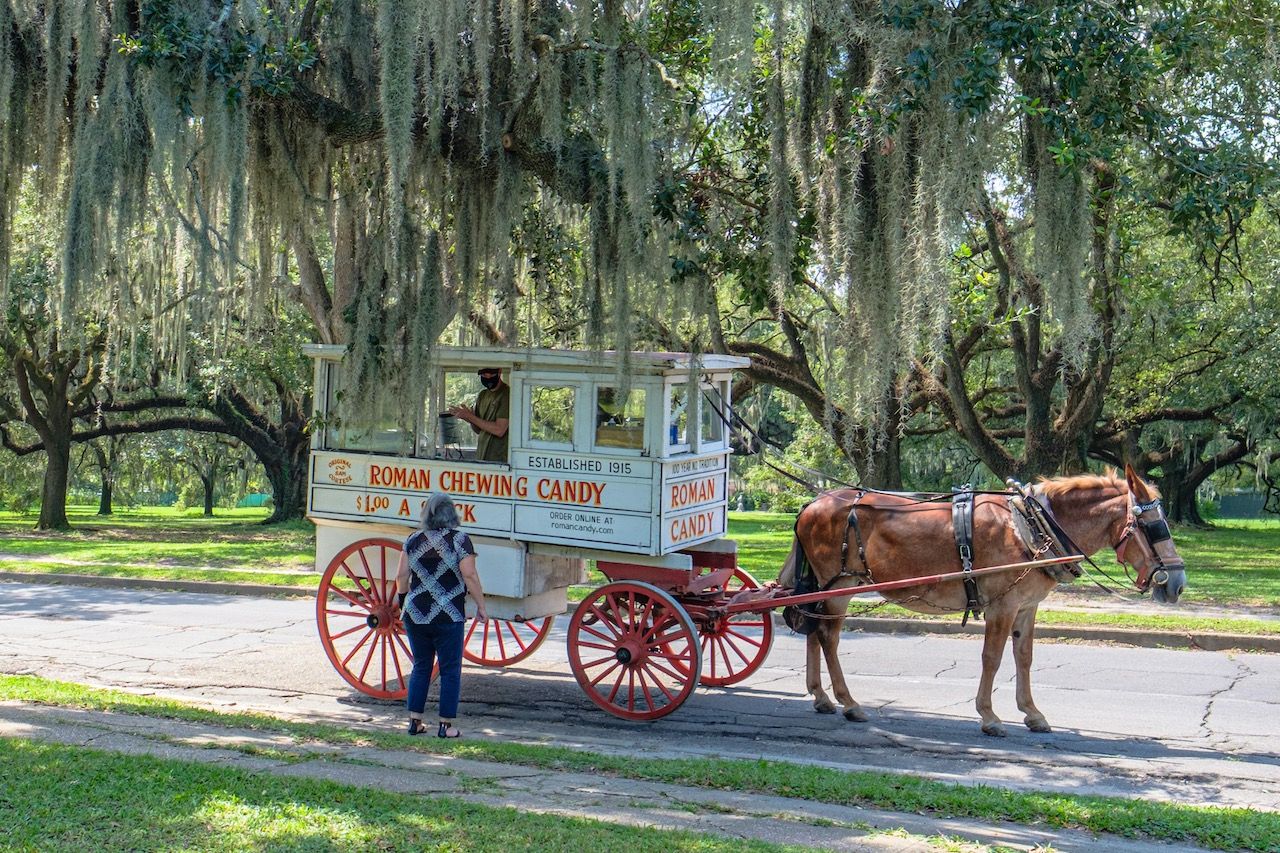 Roman candy — a chewy taffy sold in vanilla, chocolate, and strawberry — has been made and sold by the same family since 1915. You can find the original mule-drawn wagon in random places across the city, but your best bet is the Audubon Zoo. Long, thin sticks of the candy sell for 75 cents and come wrapped in wax paper.