The French have no problem with PDA — they greet friends and family with kisses everywhere. On the streets, in supermarkets, at the gym, at work, etc. There’s no stopping them — they’re kissing maniacs.

But there are subtleties to “la bise” (as this traditional greeting is called) that only the French know.

First, the French don’t actually kiss each other. Instead, they put their cheeks against their friend’s/family member’s cheeks and make kissing noises. There’s no actual lip-to-cheek going on.

Second, depending on the area where we hail from or live, the number of kisses the French give changes. Check out this map to know how many kisses are appropriate where you’re going. 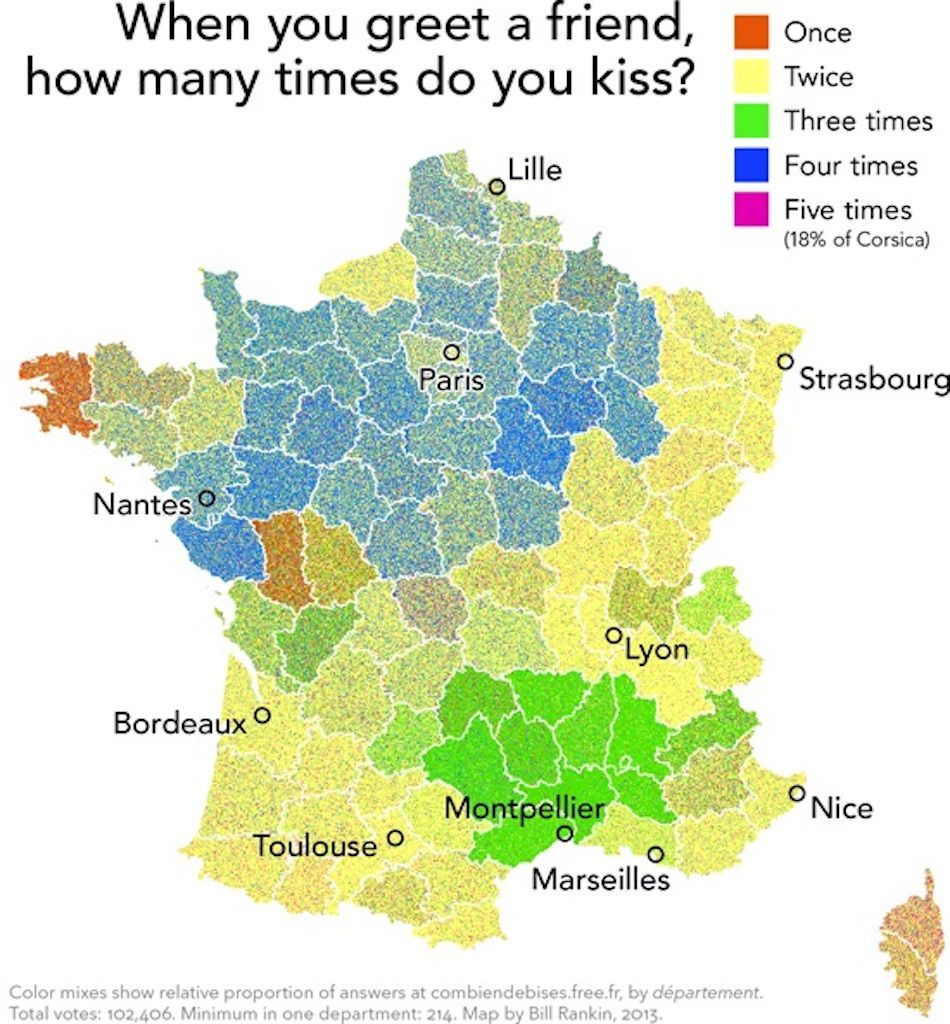 As a French person, I’ve personally never encountered someone who gives five kisses as a greeting, as they allegedly do in Corsica, but I have many friends and family who give out four of them for every “hello” and “goodbye”, so that would not surprise me that one more gets added to the load in some remote corner of the country.

Once you’ve got the technique and the number of kisses down, make sure you start with the appropriate cheek. Where I’m from, we start with the right cheek and move on to the left, but in other parts of the country, people start with the left cheek. This regional difference is so confusing that it is very likely to end up in a lip-to-lip accident (believe me, I’ve been there). To make you that you don’t involuntarily kiss your mother-in-law or your AirBnB host on the mouth, let them initiate the ritual.

Now that you’ve been briefed, you’re ready to be kissed, French-style.

Travel10 Common French Mistakes That Will Make You Blush
Tagged
Maps + Infographics Couples France
What did you think of this story?
Meh
Good
Awesome

8 of the Most Stunning Ocean Pools Around the World
6 Silky, Salty, and Nutty French Butters That Will Elevate Your Cooking
The 20 Happiest Countries in the World, 2022