In the 1960s, Atlanta took on the name “The City Too Busy to Hate.” Originally, it was a moniker to describe Atlanta’s position on its business boom during the rise of the civil rights movement, but it has grown into a source of pride for those living in the city. While always a center for business, Atlanta has gained an artistic reputation in recent years, especially for film and music.

Today, Atlanta acts as an epicenter for all things LGBTQ in the South, especially for black queer folks. RuPaul, of Drag Race fame, got his start playing Atlanta clubs in the ‘80s and ‘90s, helping the city gain a reputation as the center for drag in the United States, attracting visitors from around the world. Catering to the LGBTQ tourist is nothing new; ahead of the 1996 Olympics, The Atlanta Gay and Lesbian Visitors Center opened to help LGBTQ tourists find their way around the city. This role has since shifted online, but the city continues as a safe haven for the LGBTQ community. In fact, Atlanta hosts two major Pride celebrations, but it’s a great destination for LGBTQ travelers all year round.

Hot tip: The city and its LGBTQ hot spots are spread out, so getting a car for your visit wouldn’t be a bad idea, though ridesharing apps are a popular choice too. 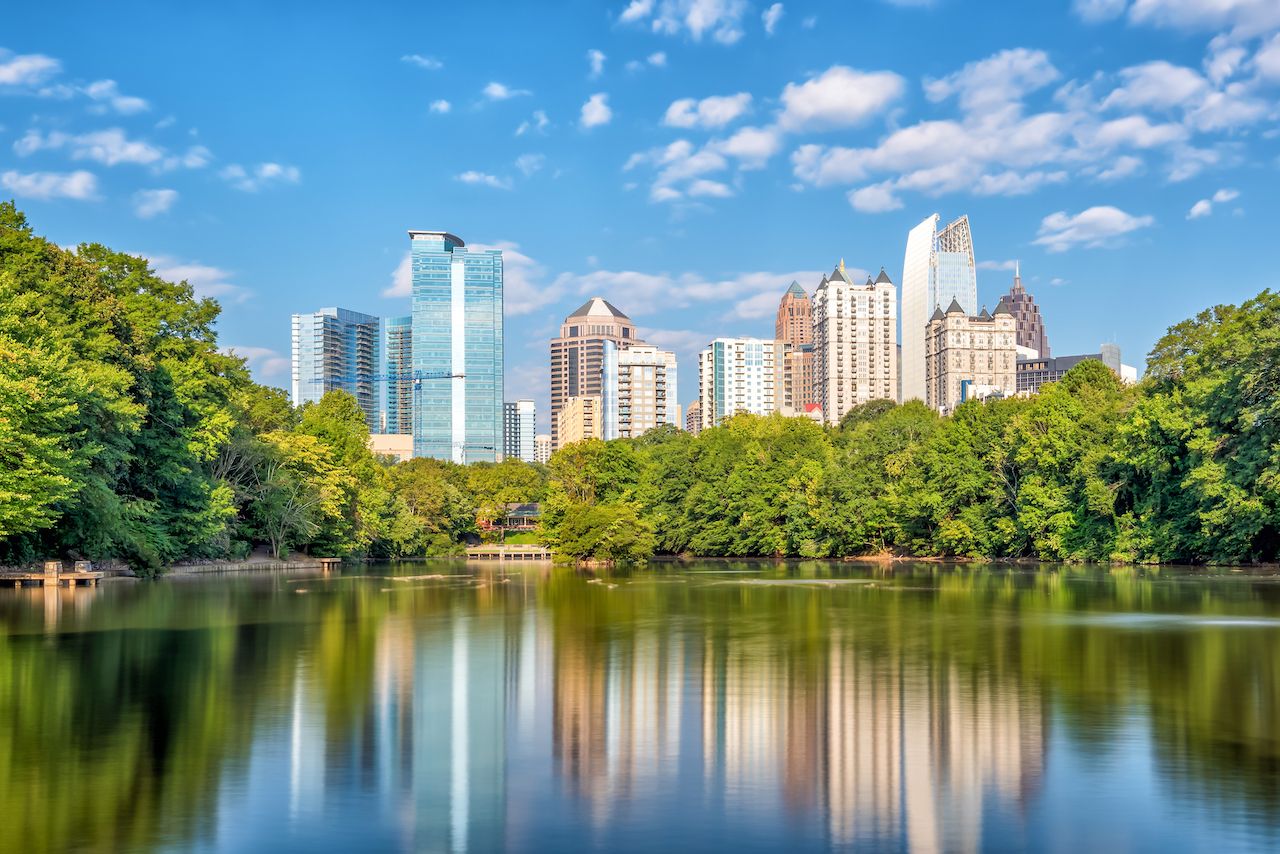 Midtown is the original “gayborhood” of Atlanta. The Atlanta Pride parade marches through the neighborhood each October before leading the excited crowd to Piedmont Park, the largest public park in the city. This is also the neighborhood that houses the city’s rainbow crosswalks, which were installed in 2017.

One of Atlanta’s coolest neighborhoods, East Atlanta Village has grown its reputation as an artsy and edgy haunt. This is a walkable neighborhood with great music venues and cute shops. LGBTQ tourists will be most interested in Mary’s, one of Atlanta’s best gay bars, but there are several more nearby for people who like to pop between bars throughout the night. 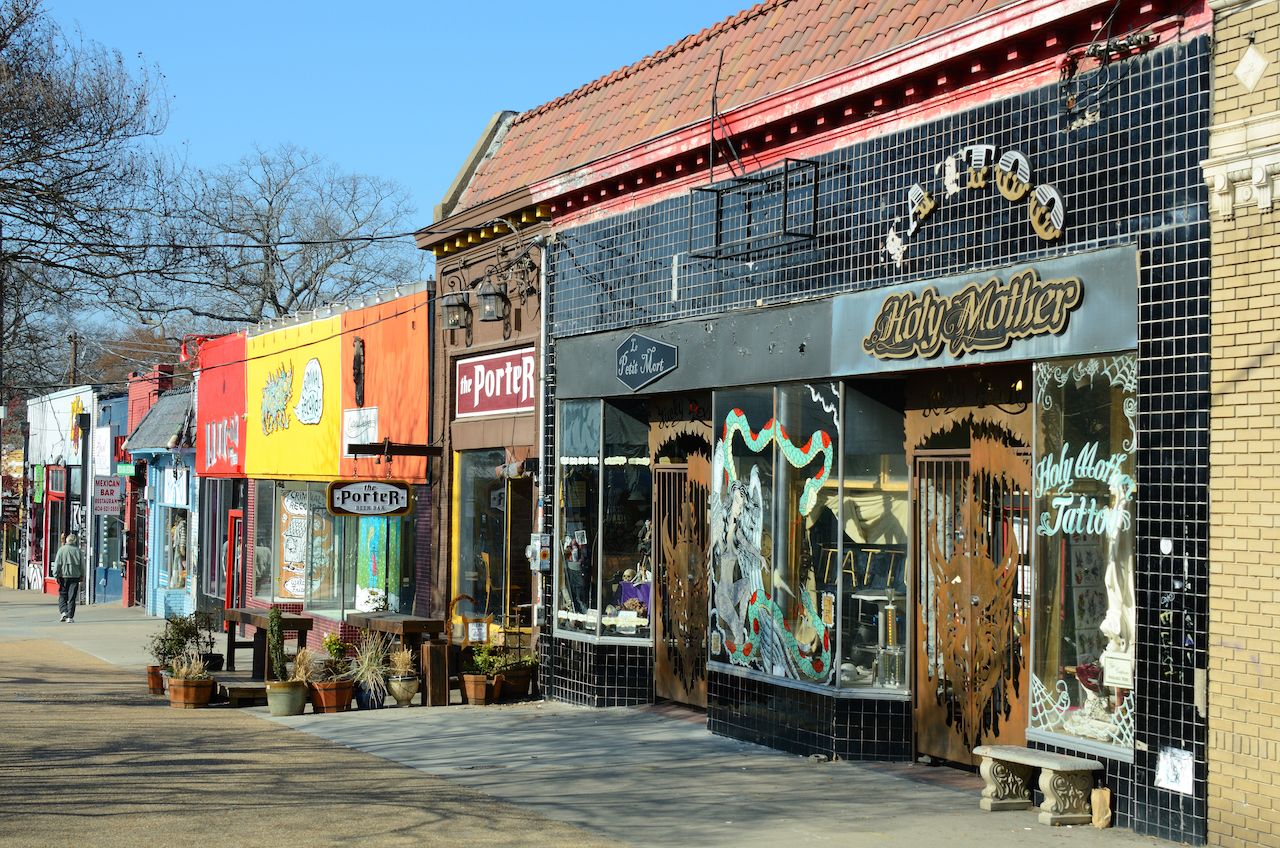 This hip neighborhood has long had a reputation for all things niche and cool, with vintage shops and quirky dives. Little Five Points is one of the best neighborhoods for people watching as it attracts all types, from hippies to punks to hipsters, no one is out of place here. While not exactly queer, the bar The Vortex is not to be missed on your Atlanta visit, and its skull-shaped door is a landmark along Moreland Avenue.

Decatur is considered a suburb of Atlanta but is best known by LGBTQ people for its popularity as a neighborhood for lesbian families to settle down and raise kids. It’s also the home of Agnes Scott, the women’s college, and the feminist bookstore Charis. This reputation has garnered the neighborhood the cheeky and affectionate nickname “Dickhater.” But there is something in this laid-back neighborhood for everyone who likes a slower pace to the rest of the city’s hustle. 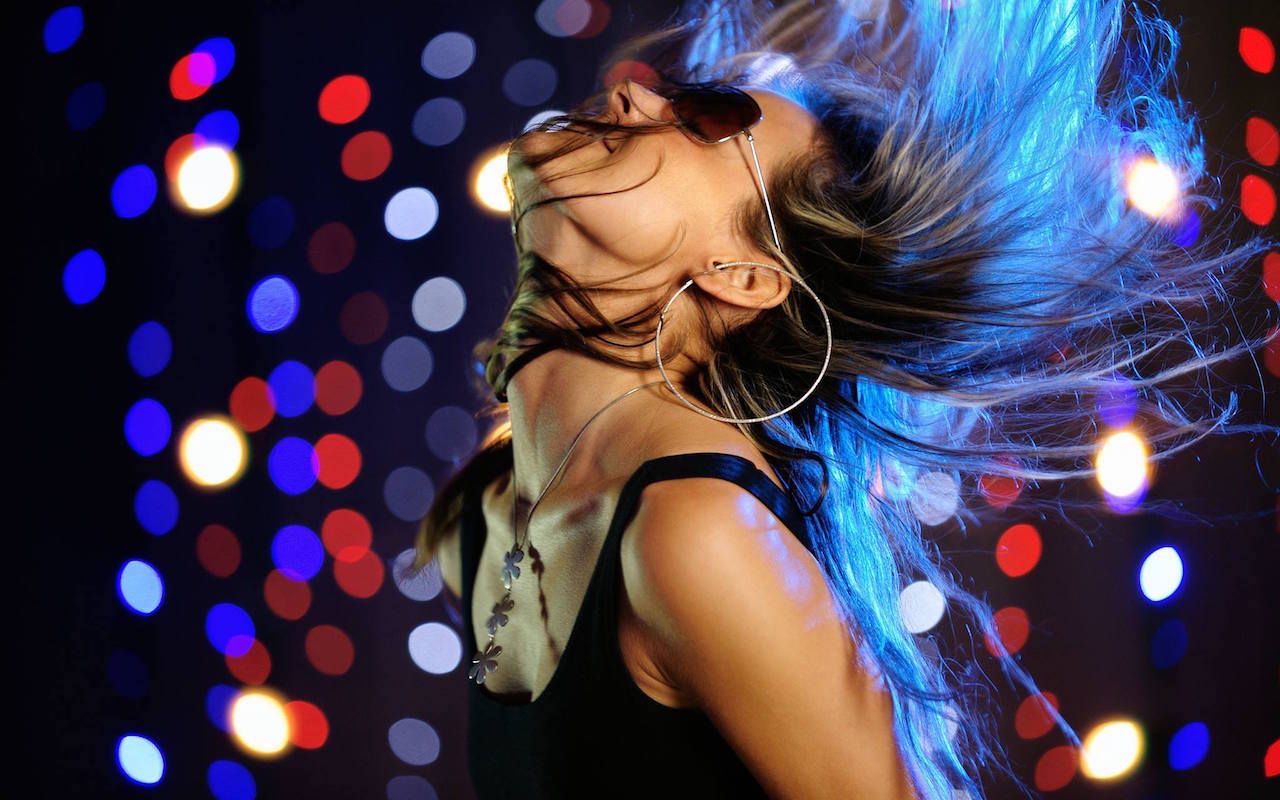 While many might call it more of a restaurant than a bar, Joes on Juniper is sure to delight, no matter the hour. A favorite for the brunch crowd, Joes on Juniper has rainbow sets which lead up to a large porch, perfect for soaking up the warm Atlanta sun and watching the Midtown crowd go by. The porch is lined with cheeky signs, such as “You can’t beat our meat” and “Eat and be Mary!” While the ambiance puts this venue on the map, it’s the burgers and wings that really seal the deal at this Atlanta staple.

My Sister’s Room is the only lesbian bar in Atlanta, but it has been in operation for more than 200 years since it opened in 1996. Not only does this make My Sister’s Room one of the oldest lesbian bars in the country, but it is also one of the few left, making it an absolute must-visit on your trip to Atlanta. The bar has moved neighborhoods several times but is now back in Midtown, the neighborhood it originally opened in. With a dance floor for getting down and a gazebo out back for meeting new friends, My Sister’s Room is the perfect place to meet someone special.

Atlanta’s premier leather and Levi’s bar, The Atlanta Eagle opened its doors in the late 1980s and has been satisfying its patrons ever since. With three bars, a dance floor, and a large back porch, the bar has a surprisingly warm feeling for a leather bar. With themed nights throughout the week, there is sure to be something to spark your interest.

Swinging Richards claims to be the best gay male strip club in all of the US, but that will be something you’ll have to test for yourself. This legendary club offers all-nude performances six nights a week with VIP and private rooms for the big spenders.

Sports lovers will find their home at Woofs, Atlanta’s only gay sports bar. With over 27 TVs, you’re ensured that the game you wanna watch is on one of them. It’s a great spot to get to know some people, enjoy a game and a beer, and relax. 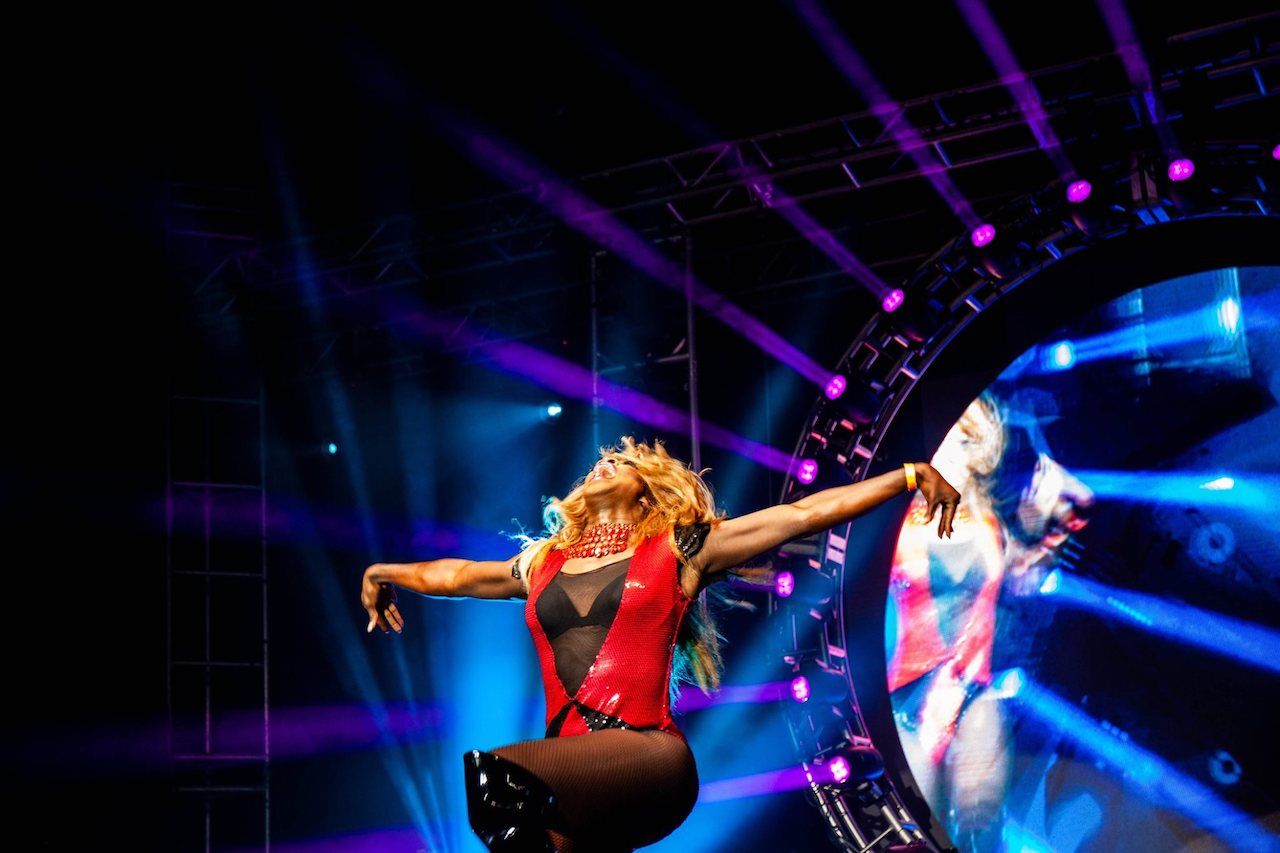 Every Labor Day weekend, Atlanta hosts America’s Black Gay Pride. The weekend is a celebration of black gay culture, and everyone is invited. Full of musical performances and parties, Atlanta Black Pride Weekend is known to go hard, so drink lots of water and enjoy the festivities. 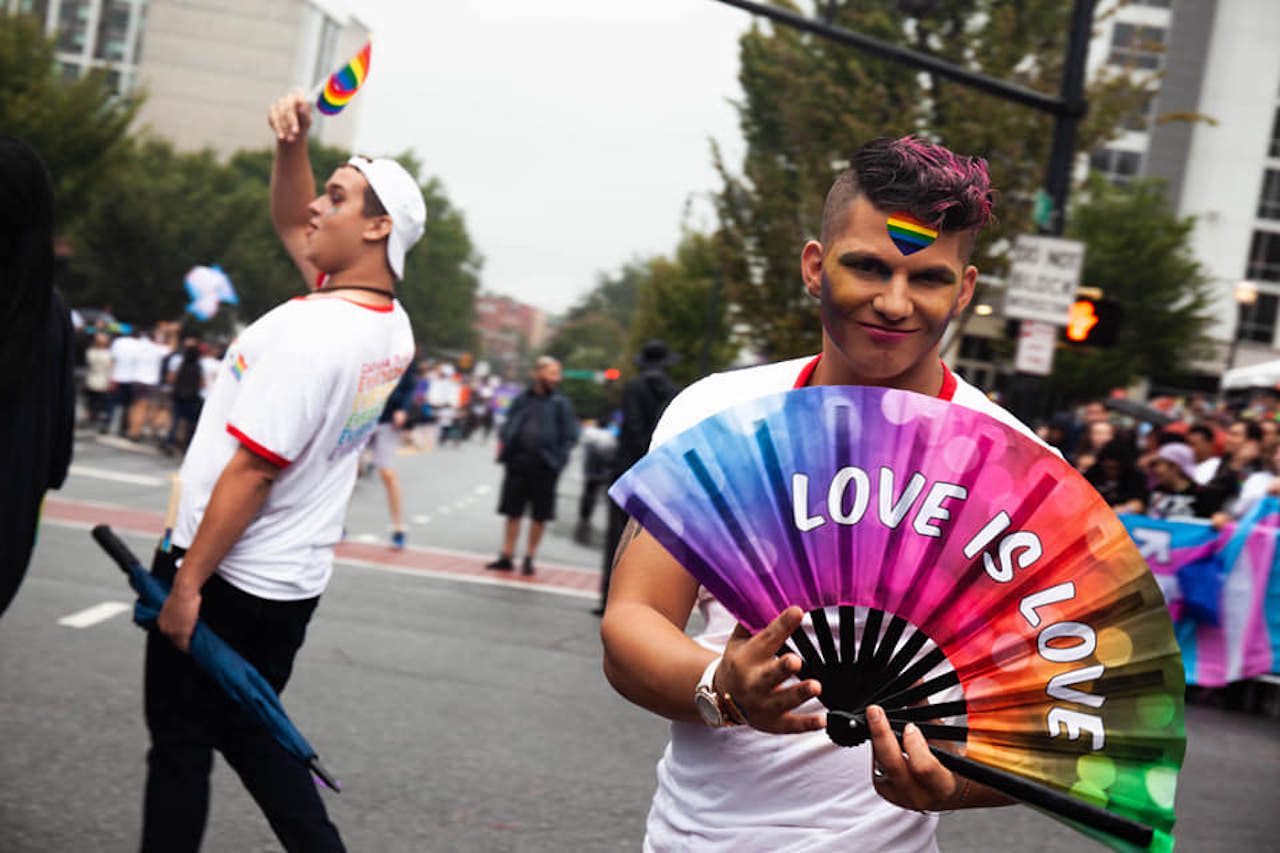 Atlanta’s first Pride took place in 1970, making it among the oldest Pride celebrations in the country. Unlike most Pride celebrations, which happen in June, Atlanta holds its parade in October when the humid heat of the city has cooled off quite a bit. Atlanta Pride’s weekend festivities culminate with the Sunday parade, which brings everyone out to Piedmont Park where performers take the stage and vendors line the streets of the park selling various pride gear. 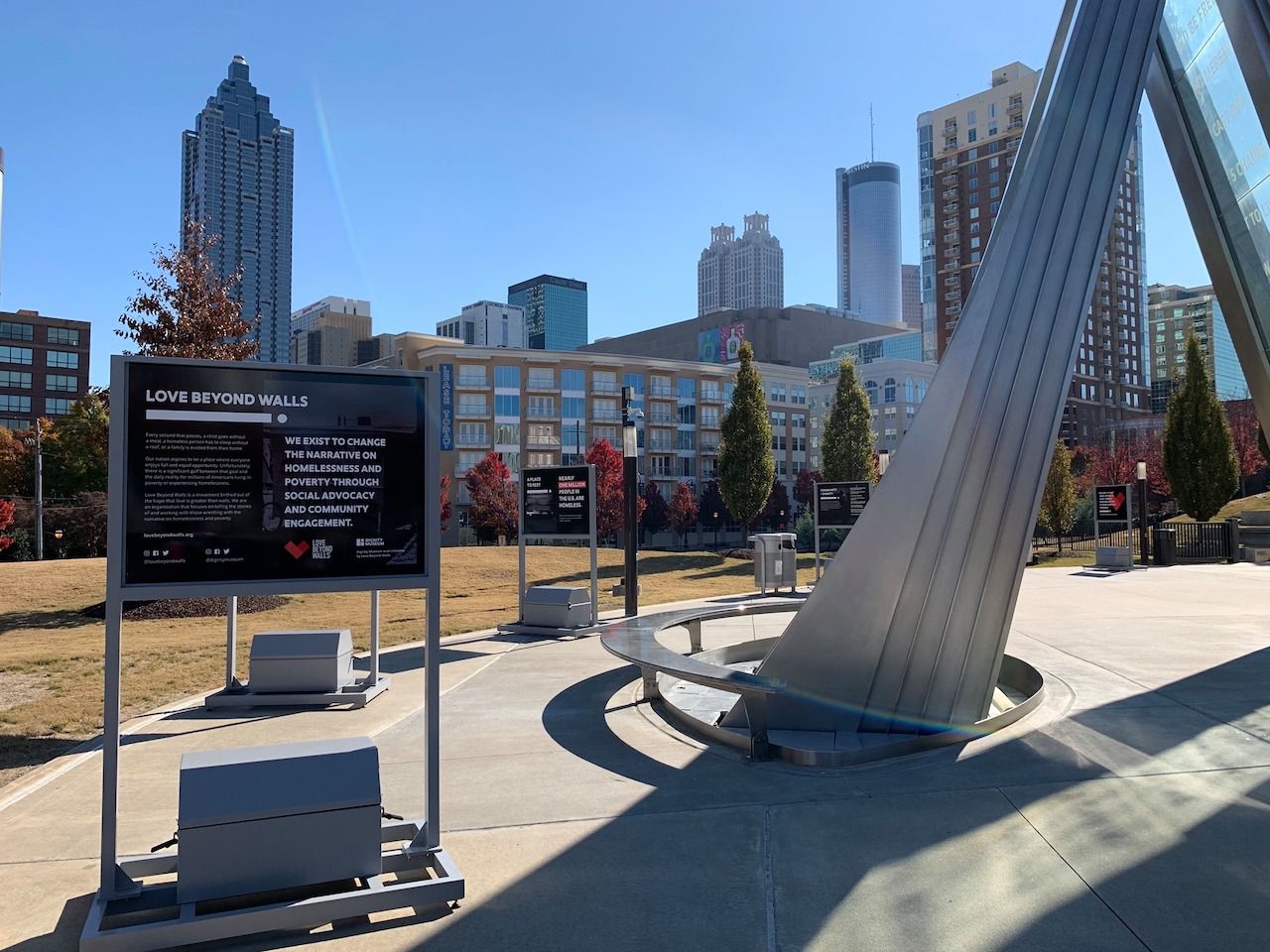 Opened in 2007, the National Center for Civil and Human Rights is a museum experience that highlights the history of the Civil Rights Movement in the United States. Atlanta played a critical role in the civil rights movement as the home of activist and leader Martin Luther King Jr. The museum takes visitors on an emotional journey that focuses on the civil rights movement of the 1960s but expands to explore all human rights, including the fight for LGBTQ equality. There’s a moving section about Bayard Rustin, the man who organized the March on Washington but was not given credit for fear that his homosexuality would damage the image of the larger civil rights movement.

For over 45 years, Charis Books and More has served the Atlanta community as a feminist bookstore and community space. In 2019, it moved from Midtown to Decatur and became the official bookstore of Agnes Scott, the women’s college. The bookstore hosts great readings and talks, so check the calendar and see what’s happening when you’re in town.

Lost-N-Found Thrift is one of the best thrift stores in Atlanta, and all of the proceeds go to supporting the connected LGBTQ youth homeless shelter. This thrift store carries everything from clothing to furniture to old electronics, making Lost and Found the best place to do some shopping for a quirky souvenir of your visit.

The Ultimate LGBTQ+ Guide To Toronto