There are many must-dos when traveling through New England. If you’re exploring the region during the fall, you must take a road trip to admire the world-famous foliage; if you’re traveling during the holidays, you can’t leave before checking out the Hallmark-movie-like towns that dot the area; and if you’re wanting to spend time in nature, you can’t miss the stunning and unbelievably underrated state parks. But before anything else, there is one activity that would be sacrilegious to forego: touring the famous New England lighthouses.

You can plan an entire road trip around the beacons or see them from a boat on one of the many lighthouse tours available, but the best way to really appreciate New England’s lighthouses is to stay in one. There are only a few lighthouses in New England that are equipped and allow for overnight stays, and we’ve selected the best of them in Maine, Massachusetts, and Rhode Island.

We hope you love the spaces and stays we recommend! Just so you know, Matador may collect a small commission from some of the links on this page if you decide to book a stay, and listed prices are accurate as of the time of publication. 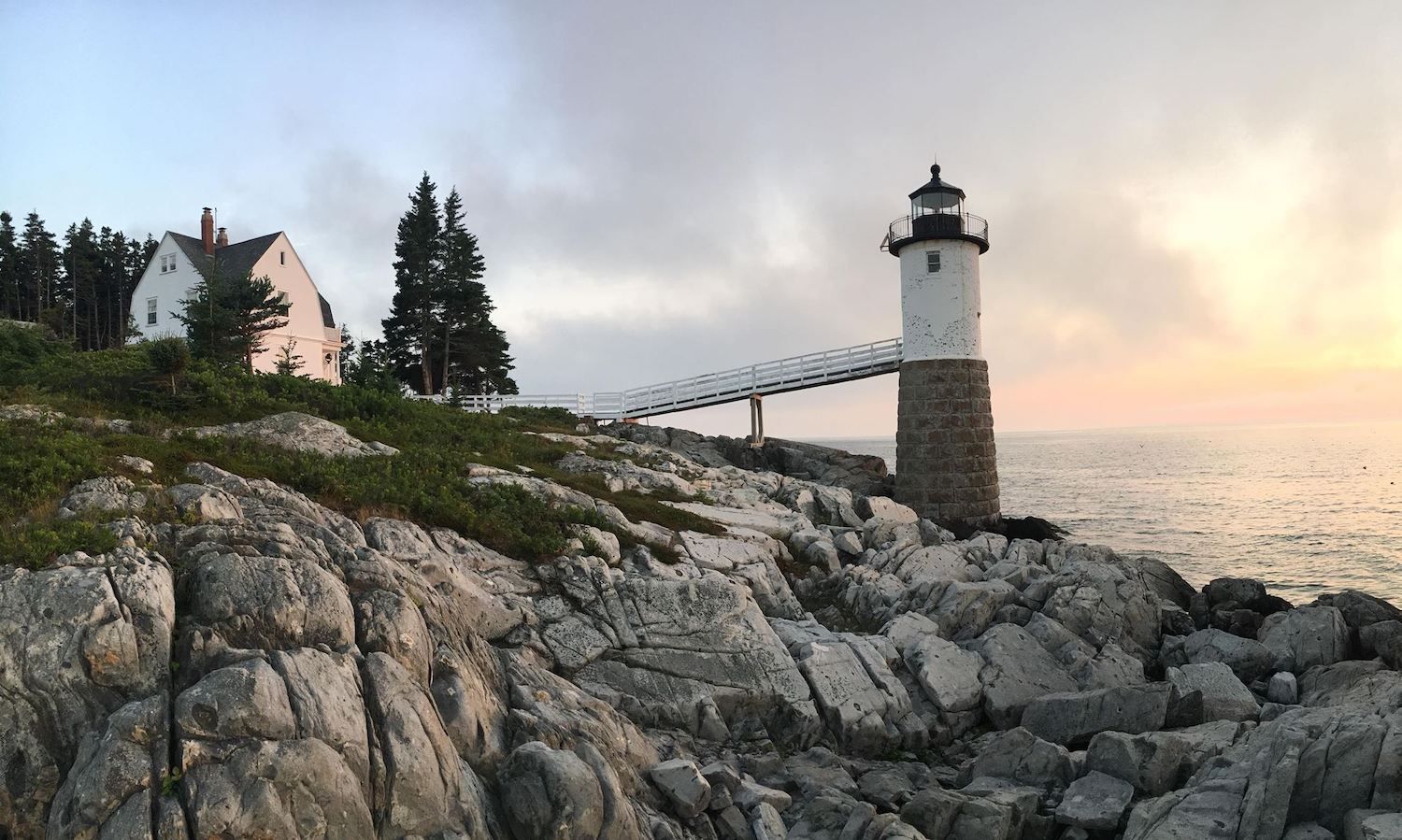 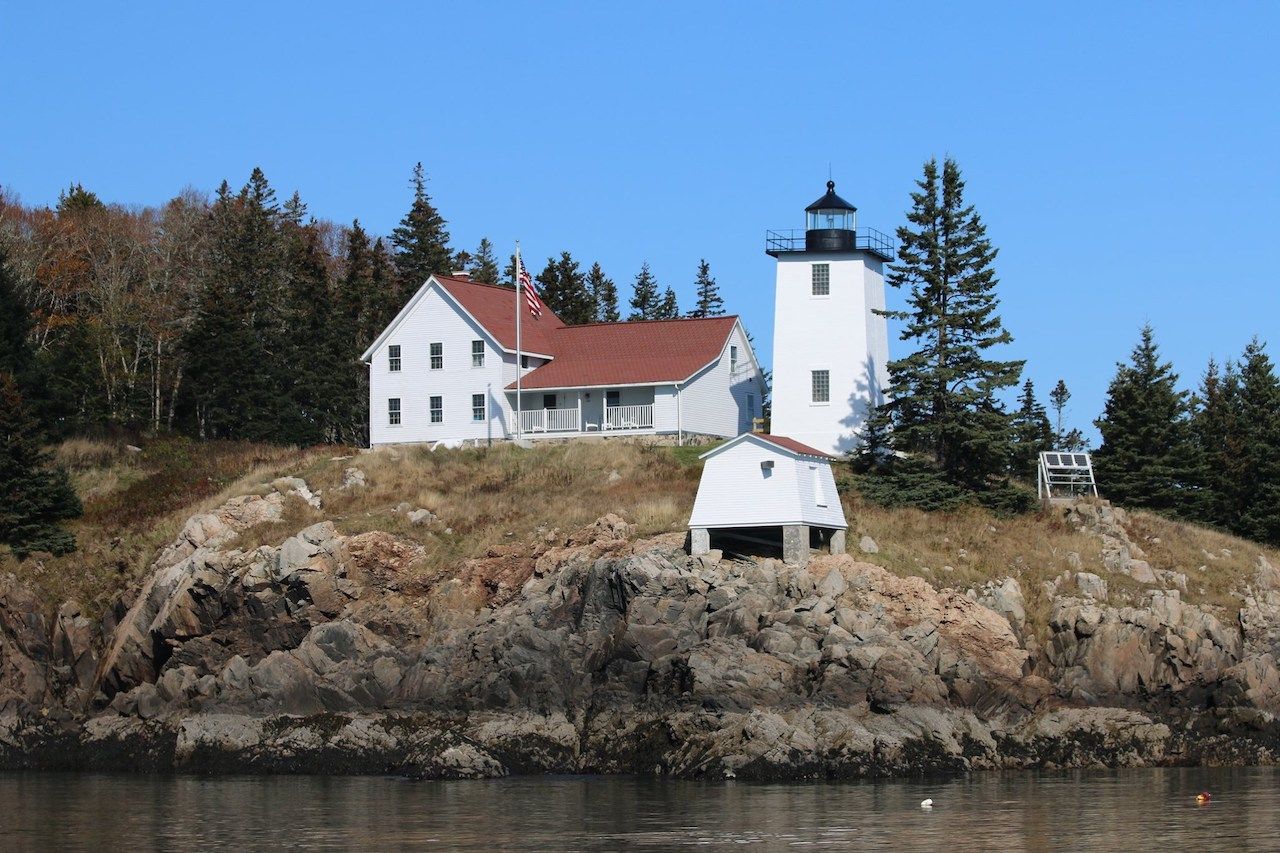 Located on Swan’s Island, the Burnt Coat Harbor Light Station is only accessible by ferry from Bass Harbor near Acadia National Park. The Keeper’s House apartment at the Burnt Coat Harbor Light Station is available for rent for one week minimum from June to mid-October for $1,200 per week in July and August and $1,000 per week in June, September, and October. The apartment is upstairs and designed for two people; it features one large bedroom, a separate living room, and a fully equipped kitchen. Every room in the apartment has beautiful views of either the ocean, the surrounding islands, the harbor, or the village. The Keeper’s House’s downstairs area is a museum dedicated to the lighthouse station and is open six days a week during the summer season, so don’t expect an entirely quiet and solitary stay. Tours of the 1872 lighthouse, which is still active and just a few yards away from the keeper’s house, also take place regularly in the summer. 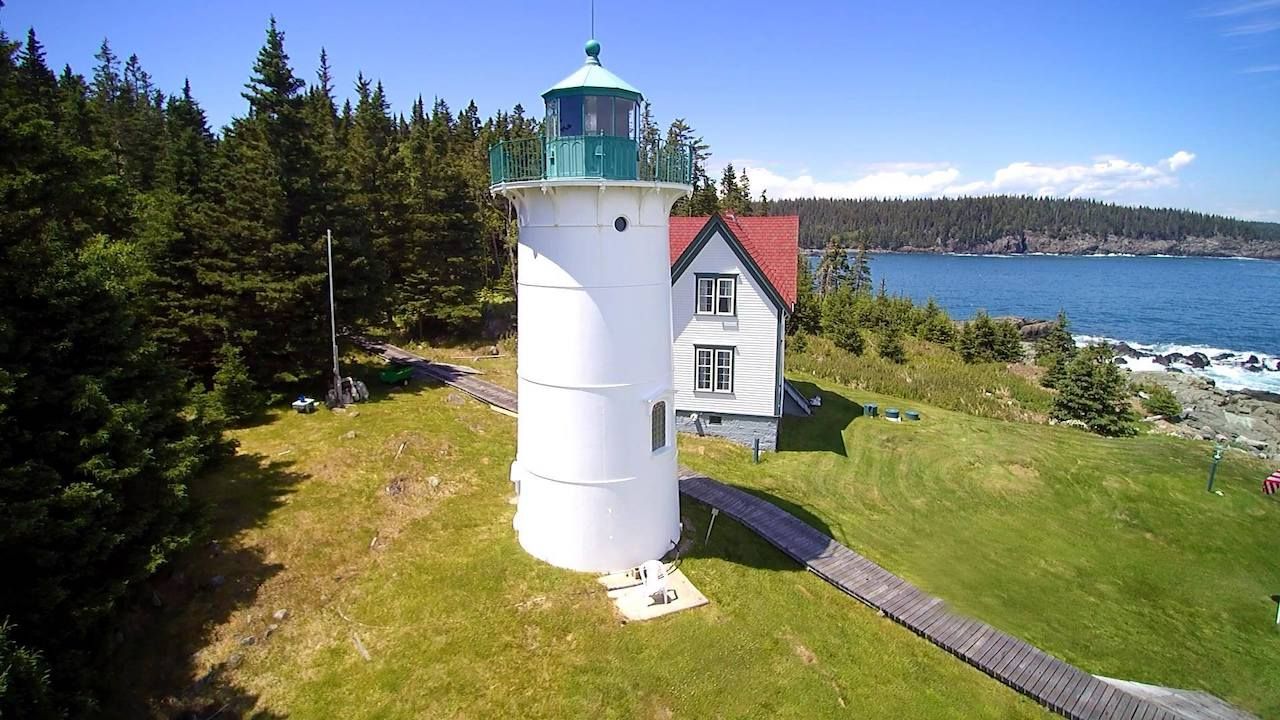 Located on an island at the entrance of Cutler Harbor, Little River Light Station is accessible via a 12-minute boat ride. There are no ferries to reach the light station; instead, volunteers of the Friends of Little River Lighthouse meet those who book a stay at the light station in Cutler and boat them to the peaceful 15-acre property. There are three rooms available for rent in the fully restored keeper’s cottage (overnight stays only run from June 15 to September 30) and rates range from $150 to $225 per night depending on the room. Guests are able to climb to the top of the 1876 lighthouse, which is still active, and admire the views of the Bay of Fundy and the boats coming into the harbor. 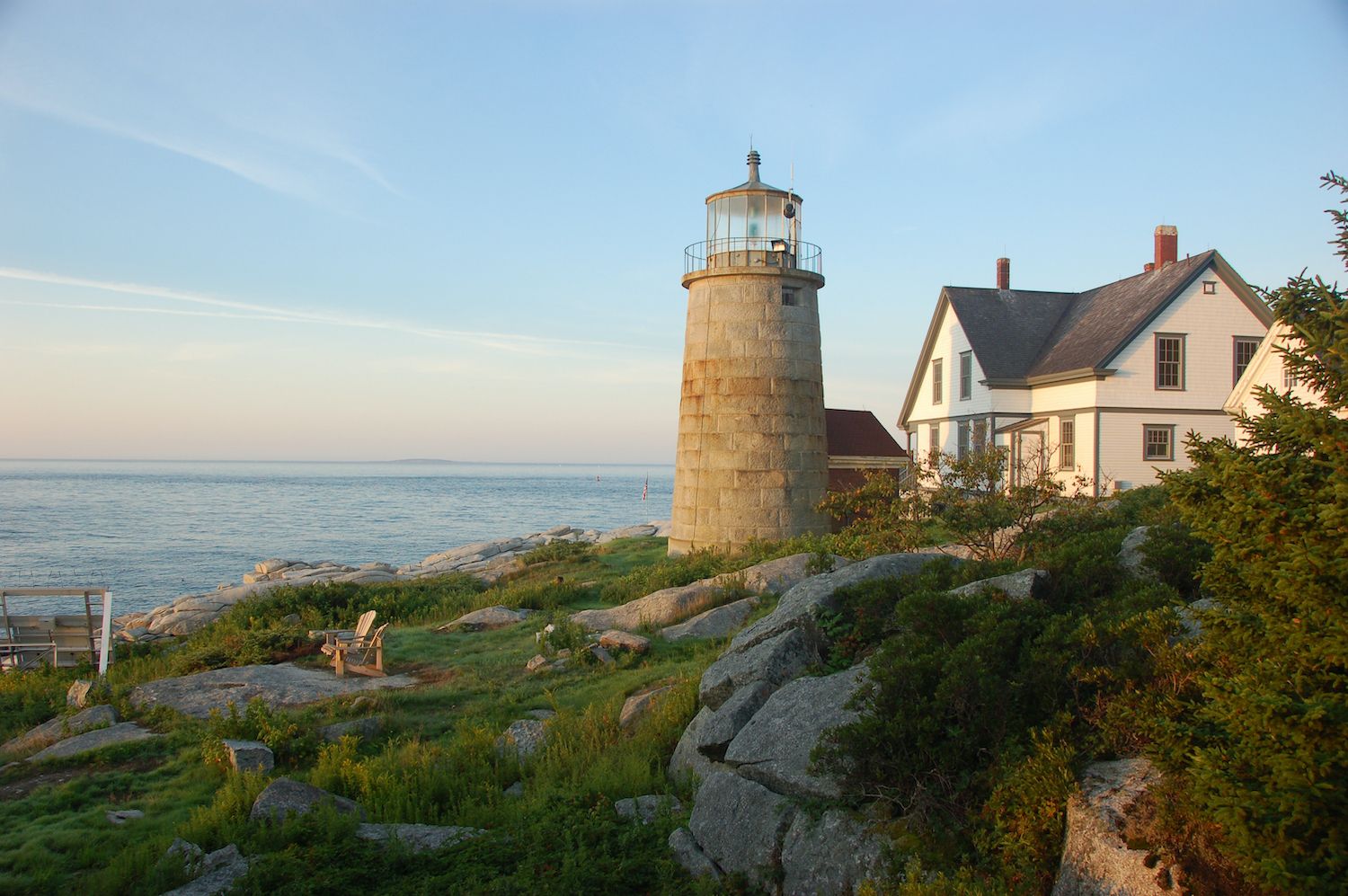 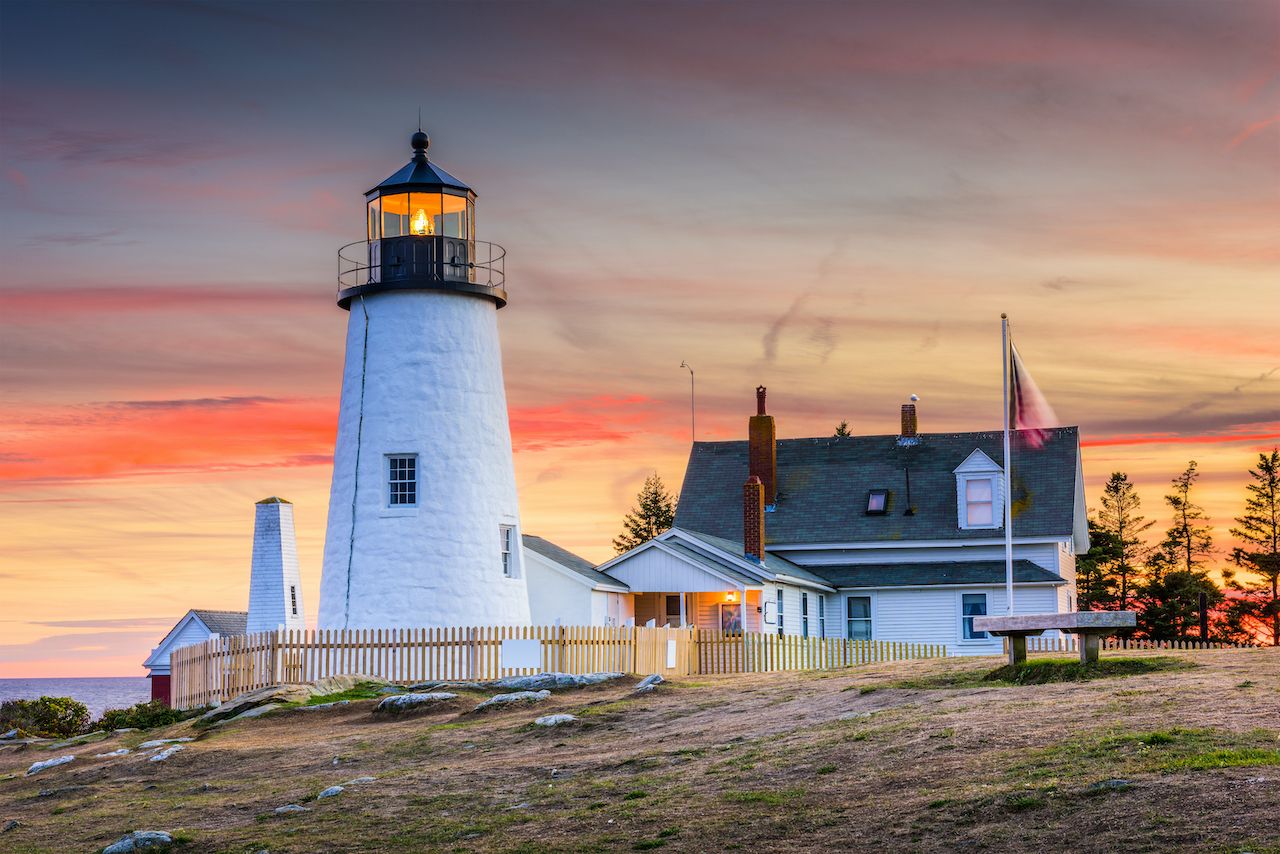 The Pemaquid Lighthouse is located on the mainland in the small town of Bristol. While it does not have the same secludedness as the previous New England lighthouse stations we listed, the keeper’s house at the Pemaquid Point Lighthouse is still a cozy and very scenic place to stay. Guests stay on the second floor of the keeper’s house in a small but comfortable apartment that has one bedroom, one bathroom, and a fully equipped kitchen with a dining area and a living room. It can sleep two to four people. Note that the first floor of the house is home to the Fisherman’s Museum, open daily from 9 AM to 5 PM. The Keeper’s House’s apartment is available year-round, but those who book from November to June need to stay a minimum of three or four nights. The 1835 tower, which is still active, is open to the public every day from Memorial Day to Columbus Day from 1 PM to 5 PM, so if you want tranquility, book outside of those dates. 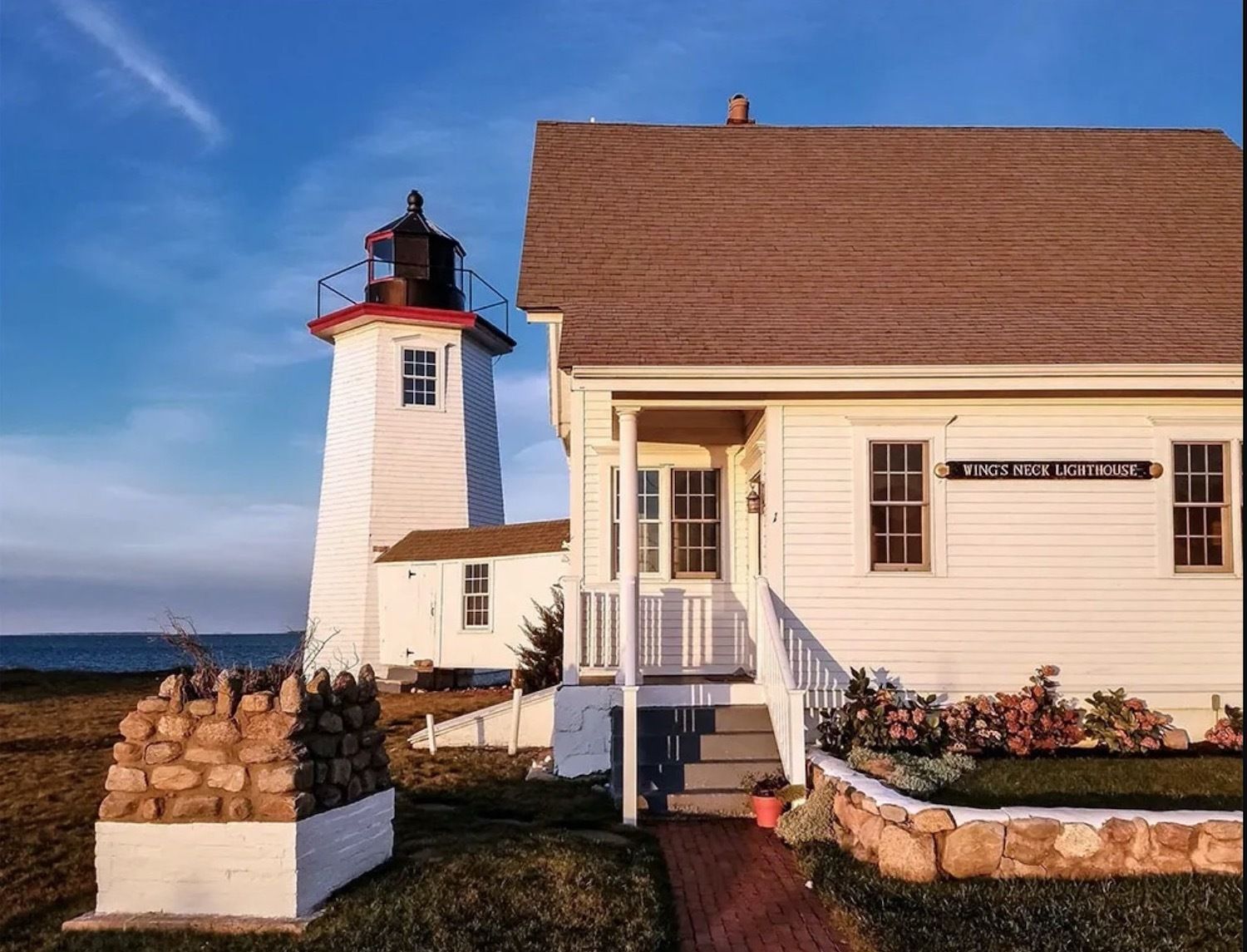 Formerly an active US Coast Guard Lighthouse, the Wings Neck Lighthouse and its keeper’s cottage have been entirely renovated to accommodate up to eight guests in its three bedrooms. The keeper’s cottage is attached to the 1890 lighthouse via a breezeway, so guests can go to the top of the tower via the mahogany staircase to the lantern room whenever they want to. Inside the keeper’s cottage, the decor is all about New England, with shades of white and blue keeping a peaceful maritime atmosphere. If you want to swim, the property, which is private, is only 600 feet away from a lovely beach, but if you’re keen to swim from the rocks at the bottom of the lighthouse, you can safely do so. Wings Neck Lighthouse is the only lighthouse in New England to be available for rent on Airbnb. 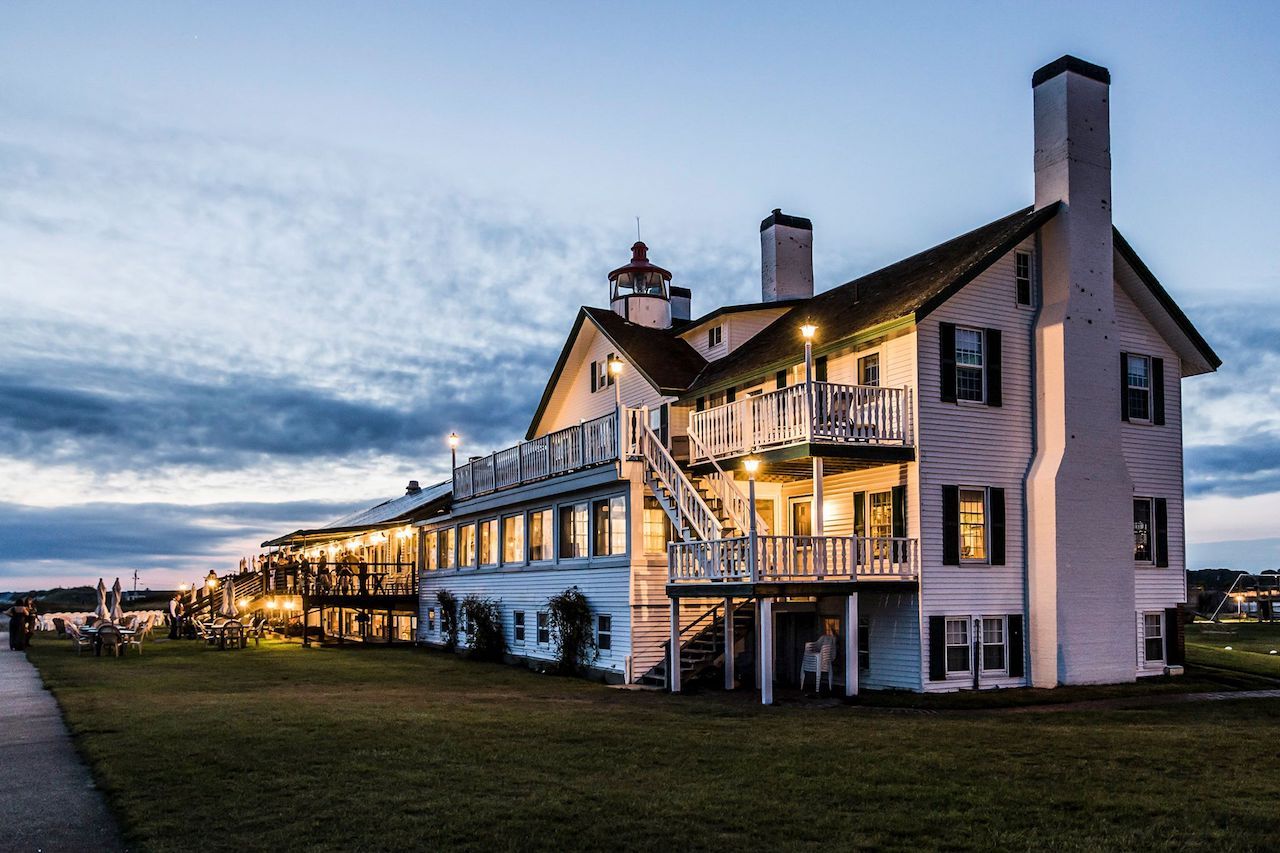 Built in 1855 on the Cape Cod Peninsula, just a 90-minute drive from Boston, the West Dennis Light is now a large inn known as The Lighthouse Inn. The property sits on nine oceanfront acres and has a private beach and outdoor heated pool. The Lighthouse Inn is open from May to October and offers varied types of accommodations such as one-, two-, and three-bedroom cottages, family suites, and guest rooms. Guests can enjoy their meals at the Waterfront Restaurant while taking in the views of the Nantucket Sound. 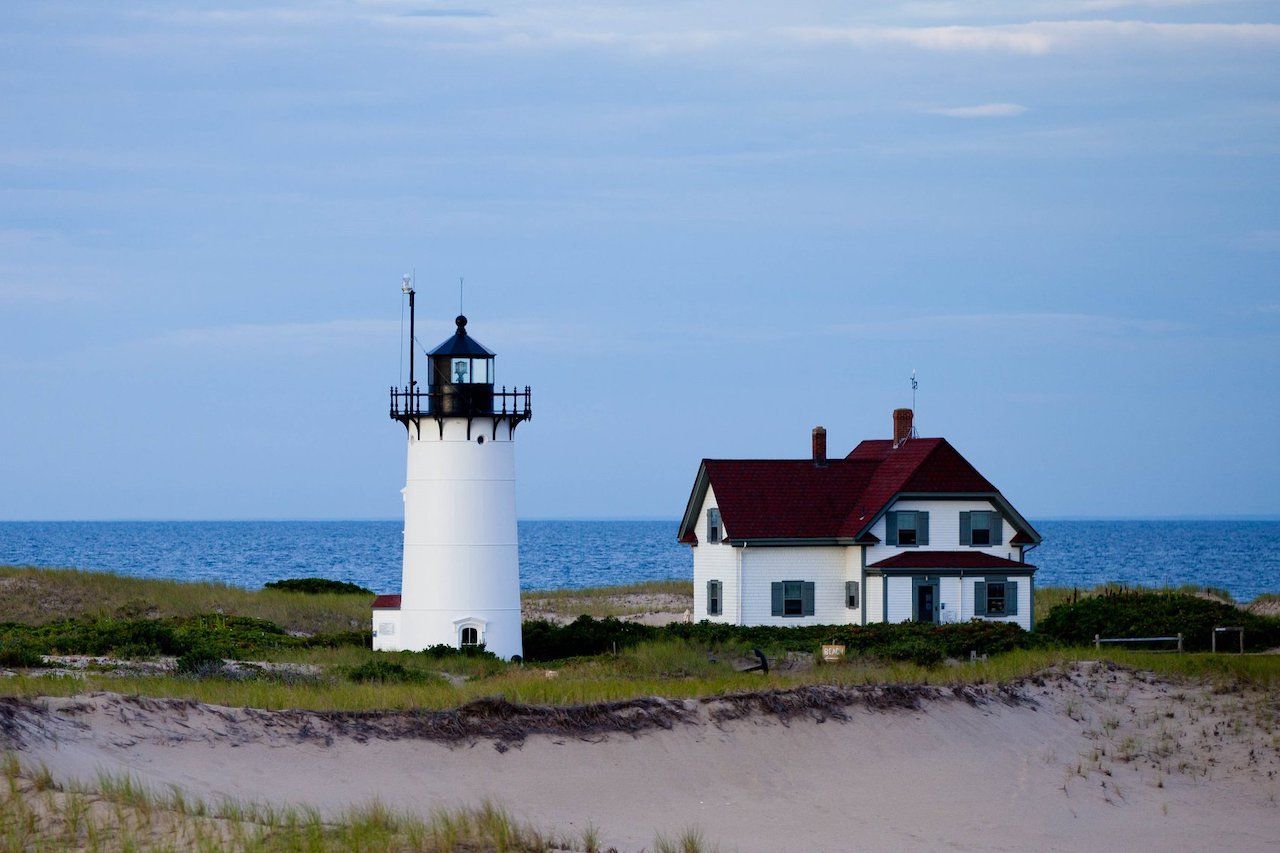 Located on the northern tip of Cape Cod in the Cape Cod National Seashore, the keeper’s house and the whistle house of Race Point Light Station have both been fully renovated and welcome guests from spring through fall. The keeper’s house, built in 1876, can accommodate up to 10 guests and can be entirely rented by one party. The Whistle House can welcome up to eight guests. The Race Point Light Station is in a secluded location, and guests need to use their own four-wheel-drive vehicle and obtain an oversand permit from the National Park Service to access it. Alternatively, they can contact a dune tour operator for transportation. Fit travelers can make their way on foot. The lighthouse, rebuilt in 1876, is open for tours twice a month from June to October. 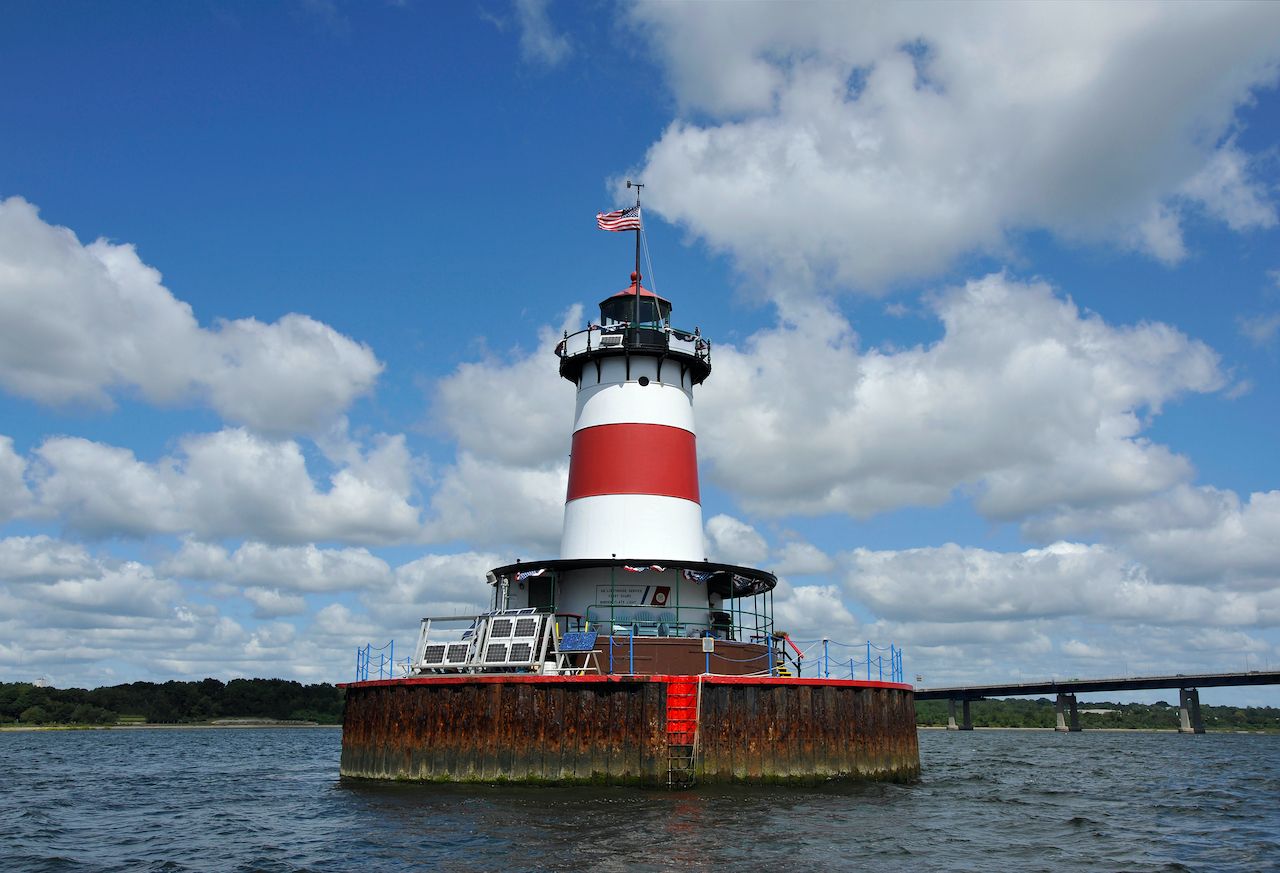 If you’re looking for a secluded lighthouse you can stay in overnight, it doesn’t get much more remote than this eye-catching off-shore lighthouse located between Somerset and Fall River. It’s available for overnight stays via its Overnight Keepers Program from April to November, as well as a few nights in December upon request, starting at $395 per night. Built in 1881 and inhabited by keepers until 1963, the Borden Flats Lighthome is very cozy and welcoming, and it can accommodate two guests for up to two nights. The lighthouse is completely off the grid and powered by solar panels and batteries. There is no WiFi in the lighthouse, but guests are so busy enjoying the view from the lantern room that they are unlikely to miss it. Complimentary boat service from Borden Light Marina is offered to guests. 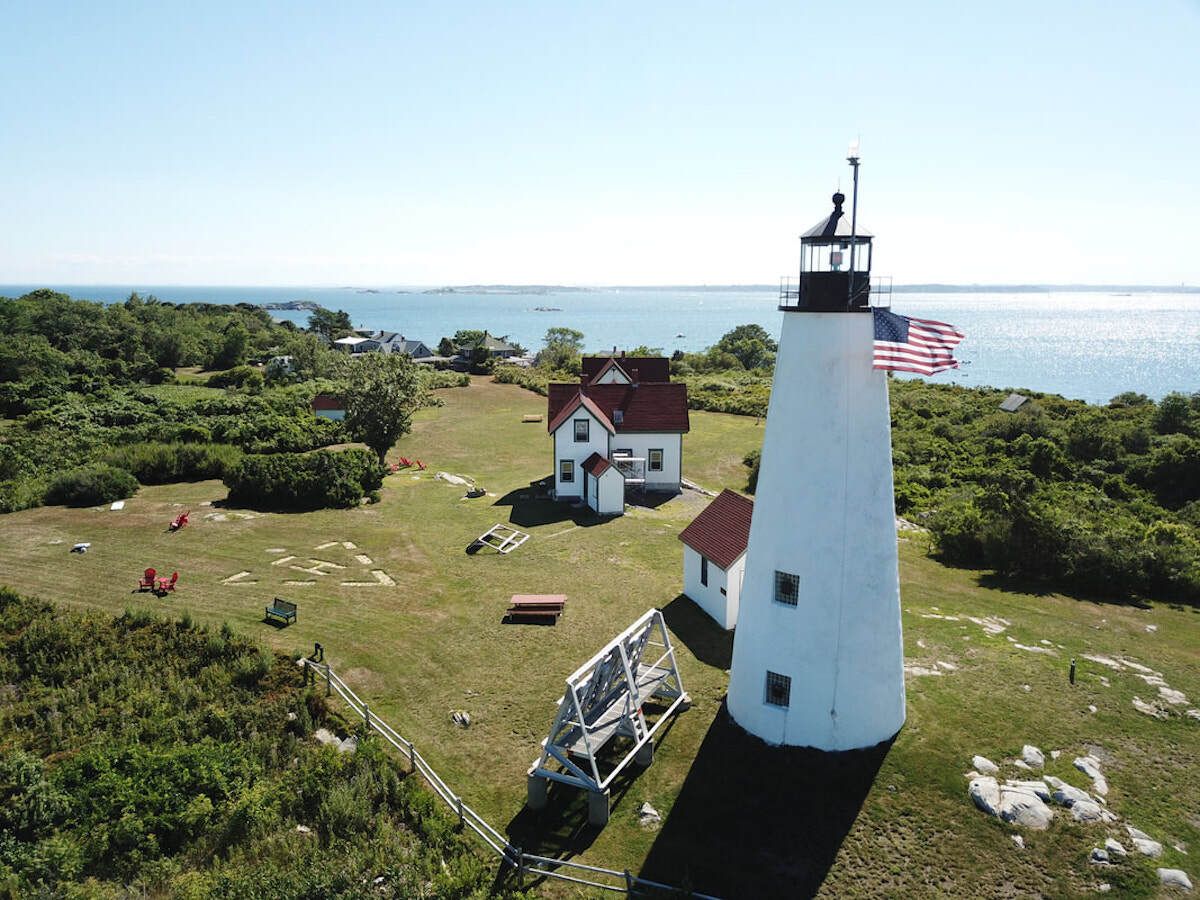 Bakers Island Lighthouse is located on a 55-acre island that’s just four miles off the coast of Salem. The property itself is on 10 acres of private land and is available for rent for up to six people between June and September for a minimum of two nights (Fridays and Saturdays only). Rates start at $790 for four people for two nights (price includes a boat ride to and from the island). Guests don’t get to stay in the lighthouse but in the Assistant Keeper’s House, which is solar-powered with limited lighting, basic furniture, filtered well water, and a limited amount of hot water. There is no TV in the house, so guests can fully unplug and relax by the ocean. 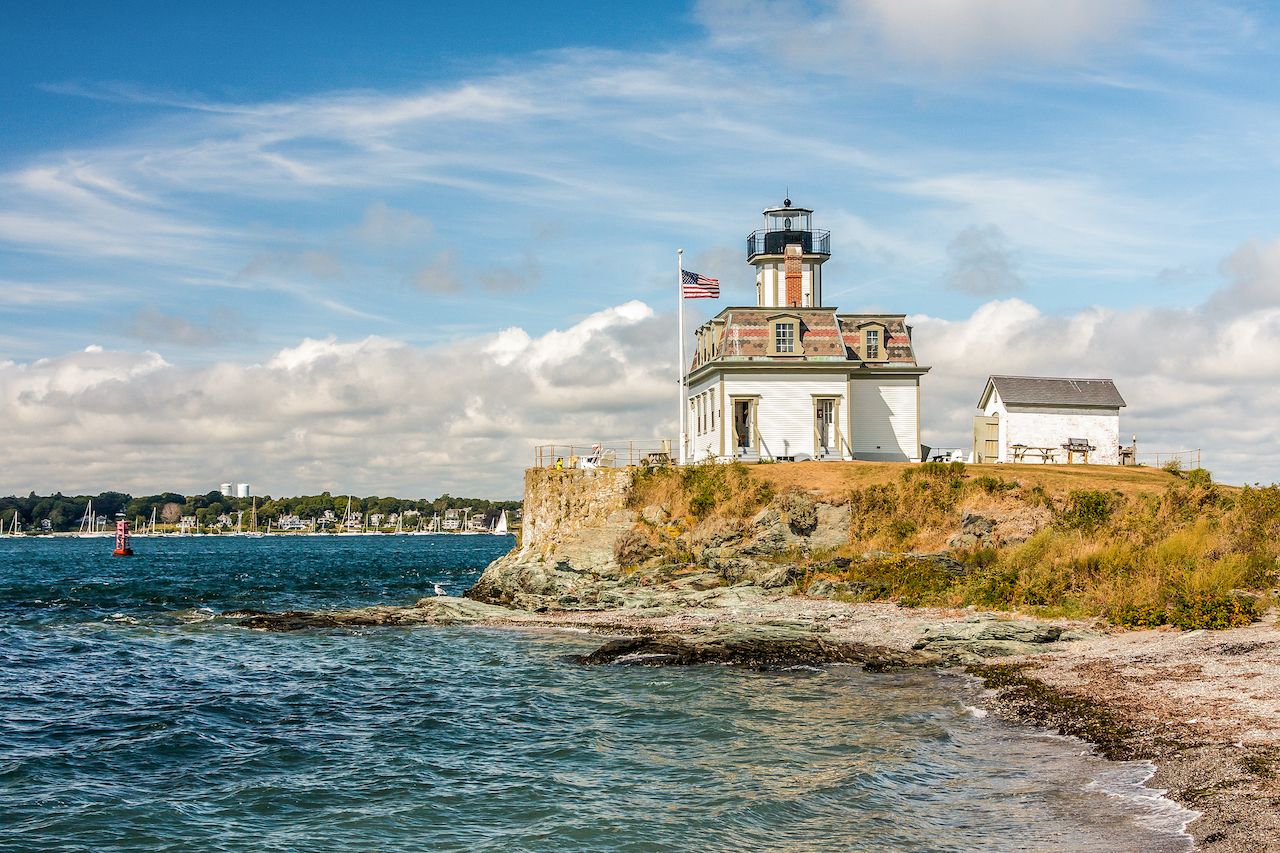 Located on an 18-acre island that’s only accessible by ferry from Newport or Jamestown, the historic Rose Island Lighthouse is a great place to easily escape the city to find some quiet and solitude for one night or a full week. Guests have several accommodation options — they can stay in one of the two rooms in the lighthouse itself, in the keeper’s apartment, in the foghorn room, or in the barracks room. Whatever the selection, guests are sure to have a comfortable stay in the restored accommodations, as well as beautiful views of the natural surroundings. Guests will be able to make their way all the way up the still-functioning 1870 lighthouse and walk in the footsteps of the keepers. Those who stay there will not be completely secluded from the rest of the world as tours of the Rose Island Lighthouse and Fort Hamilton occur six days a week. The island is also open to the public for hiking and wildlife watching.