Visiting Salem on Halloween is a cliche, like watching A Christmas Story on Christmas. Well, much like A Christmas Story, celebrating a Salem, Massachusetts Halloween is an experience you simply never get tired of, and it has the power to put you in a festive mood all year round. Halloween in Salem is a rite of passage for anyone living in New England and should be a bucket-list trip for Halloween lovers everywhere around the country. Going to Salem is like getting on the magic bus that takes you to Halloweentown from the 1998 Disney movie, a place filled with eccentric — and sometimes frightening — characters, steeped in history, and with a charming aesthetic verging on supernatural.

The city owes its nationwide fame to its role in the horrific witch trials of the 1690s. Although the trials remain a somber and sad part of the country’s past, Salem has somehow transformed this dark moment into a selling point. Ironically, the very creatures the city was once so keen to get rid of now serve as mascots, as witch culture seeps into every aspect of Salem’s identity. From witch dungeon museums to haunted 17th-century houses, going to Salem means leaving reality behind for an almost supernatural destination that never loses its magic, whether it’s October 31 or mid-July.

If you have a few days and really want to see everything Salem has to offer, just follow the Salem Heritage Trail (and if it’s October, lean into the eccentricity and do it in costume). The trail is a red line on the ground that leads visitors through all the historic sites and will give you the most comprehensive tour of the city. If you only have a day or an afternoon, you’ll want to be more selective. Start with the museums, which connect Salem’s complicated history and its contemporary whimsy. 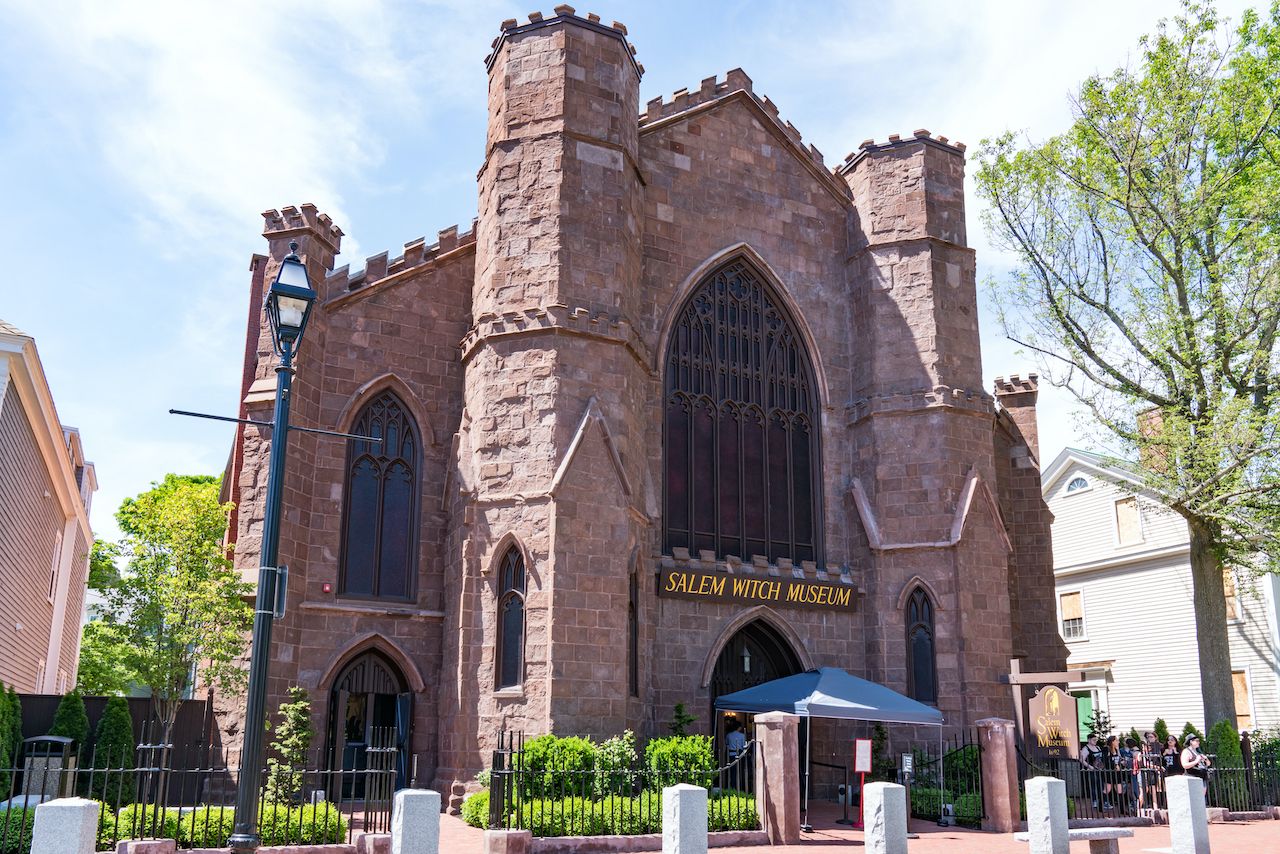 Your first stop should be the famous Salem Witch Museum, with performances that tell the story of the Salem witch trials using life-size sets, dramatic lighting, and narration based on documents from the real event. Once the story of the witch trials concludes, you’ll be introduced to the second exhibit, called Witches: Evolving Perceptions, which educates visitors on how witches have been perceived throughout history. This includes debunking common stereotypes, discussing the phenomenon of “witch hunting,” and looking at modern witchcraft practices.

To dive a little deeper into the history of the Salem witch trials, head to the Witch House on Essex Street. The former home of Judge Jonathan Corwin in the late 17th and early 18th centuries, the house is the only preserved structure in Salem with direct ties to the Salem witch trials. Corwin had been one of the judges involved in the trials, signing several arrest warrants for alleged witches and presiding over hearings. The house now serves as a museum of 17th-century life, and guided tours give visitors a better understanding of those who were involved in the witch trials.

If you’re more of a visual learner, the Witch Dungeon Museum offers a performance-based experience to transport you back to the troubling days of 1692. There you’ll see a live performance by professional actors reenacting a witch trial, based on transcripts from the 17th century. You’ll watch the infamous story play out from beginning to end — from the strange behavior of the allegedly possessed children to the flimsy accusations of witchcraft and the eventual hanging of the accused. The reenactment is followed by a tour of the downstairs dungeon, recreated in the style of those used to imprison those judged and condemned as witches. 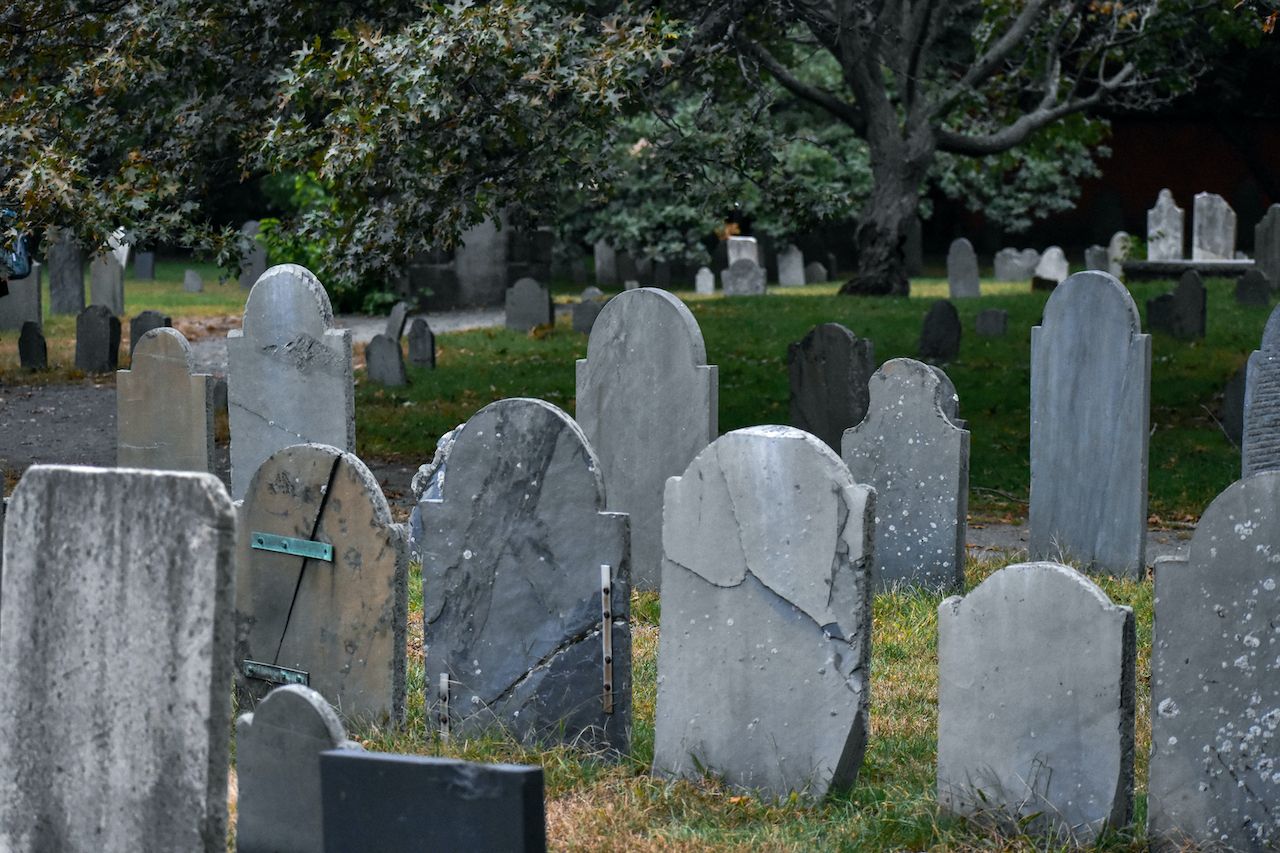 Once you’ve finished the museum circuit, it’s time to pay a visit to some of the historical figures you may have learned about on the tours. The Old Burying Point Cemetery, the oldest cemetery in Salem, started accepting new residents in 1637 and is the final resting place of several figures associated with the witch trials. The cemetery is home to Judge Hathorne, one of the main magistrates involved in the trials; Bartholomew Gedney, another trial judge; and Simon Bradstreet, the last governor of the Massachusetts Bay Colony.

If you’re going to explore Salem, especially around Halloween, it’s only fitting to do it by eerie candlelight. Candlelit Ghostly & Graveyard Walking Tours are guided tours around the old streets of Salem, where you’ll learn about the city’s most haunted houses and locations. Rather than just hearing a history monologue, you’ll also be learning about various accounts of supernatural activity and the best methods for practicing ghost photography. The tour stops at several haunted locations including the Joshua Ward House, the Howard St. Cemetery, the Old Salem Prison, and the Lyceum.

Tours are held every hour from noon to 7:00 PM and every 30 minutes in October until 10:00 PM. Tickets can be purchased at the Salem Wax Museum or Salem Witch Village. The Witch Village is a small maze of streets lined with shops selling witchy memorabilia and crafts. While you’re there buying your ghost tour tickets, you might as well check out all the boutiques and get yourself a souvenir. You can also opt for a guided tour of the village by a practicing witch, who will teach you all about modern witchcraft.

After a day saturated with ghosts and witch stories, you may be craving a dose of reality. Luckily, some of Salem’s best museums aren’t even Halloween-related. Apart from the witch trials, Salem is perhaps best known as the home of Nathanial Hawthorne, author of The Scarlet Letter. Hawthorne used the town as inspiration for many of his stories, particularly The House of Seven Gables — a gothic novel with elements of supernaturalism and witchcraft.

Hawthorne based the titular house on a mansion on Salem’s Derby Street, called the Turner-Ingersoll mansion. Built in 1668, the 350-year-old gabled house was owned by Hawthorne’s cousin, Susanna, and now serves as a museum to American architectural history. On a tour you’ll be able to climb through a secret passageway, see Hawthorne’s original work on display, and explore the seaside gardens and surrounding grounds. You can also visit Hawthorne’s birthplace, which was moved from its original location a few streets over to sit conveniently beside the House of Seven Gables. 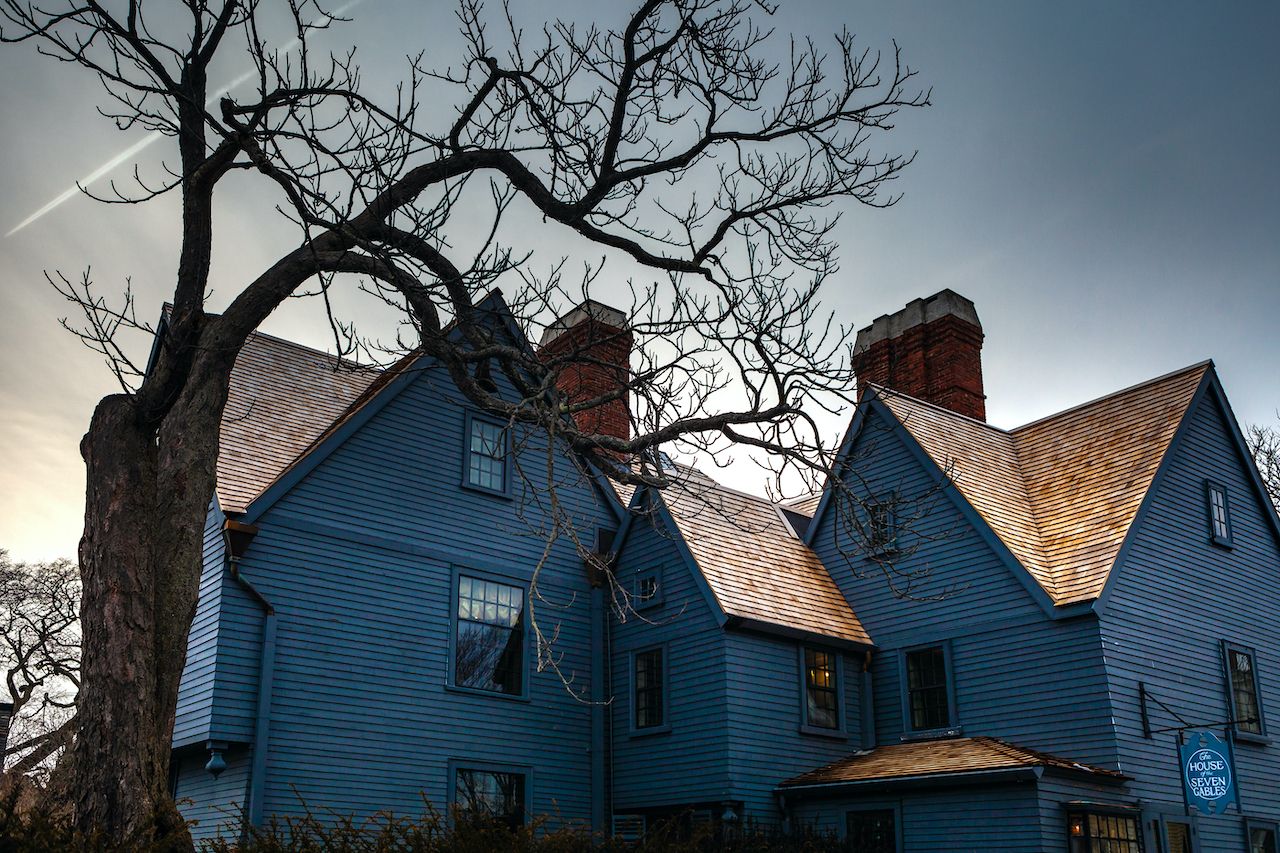 To many, Salem’s Halloween associations are secondary to its significance in the art world. Established in 1799, the Peabody Essex Museum is the oldest continuously operating museum in the United States. It holds one of the country’s largest collections of Asian art and a trove of manuscripts, maps, and artifacts related to Salem’s centuries of maritime history.

The more you lose yourself in Salem’s history of haunted houses, the easier it is to forget that you’re still in a classic New England seaside town. To give yourself a reminder, head to Pickering Wharf, a harborside shopping village with local boutiques and dining with waterfront views. 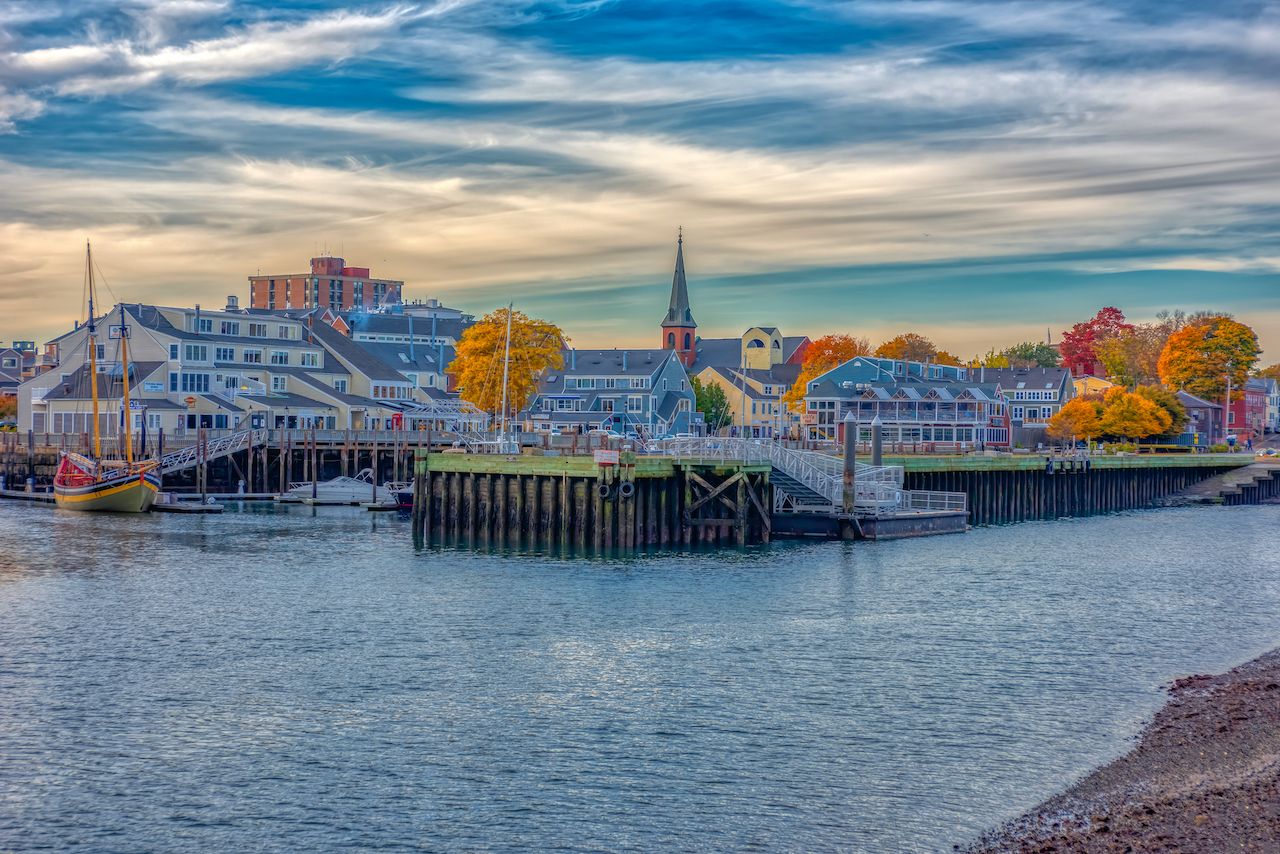 Make sure to check out Joe’s Fresh Fish Prints, a unique gallery and workshop selling prints and clothing made from actual fish, and The Marble Faun Books & Gifts for eclectic handcrafted accessories and books reflecting the local seafaring culture. When it’s time for food, Brodie’s Seaport is a local staple for seafood, steak, and flatbreads just one block from the water. 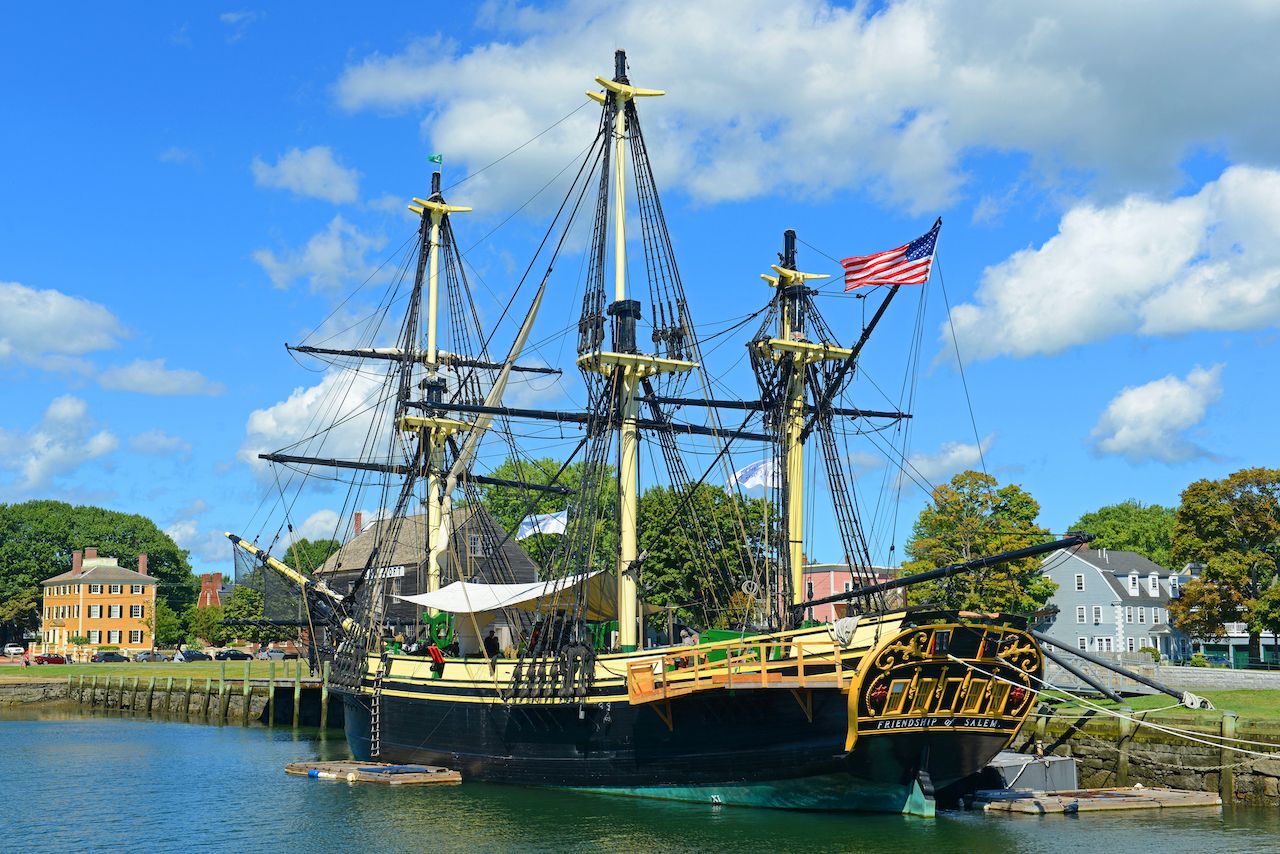 Since it wouldn’t really be Salem without a little nod to the past, the wharf is also home to the Friendship Schooner. This replica of an 1800s trading ship that serves as an homage to Salem’s former role as a hub for maritime commerce, and you can either choose to admire it from afar or tour the decks yourself. For an even more interactive boating experience, take a sailing tour aboard the Fame of Salem, a replica of a ship from 1812. Half-day tours bring guests all the way to Gloucester and Swampscott, while the more relaxed Sunset Sail allows you to just kick back with a cocktail.

There is no shortage of hotels in the area, but you didn’t come to Salem to stay in a Holiday Inn Express. To get the full Salem experience — a potent mixture of eerie history and New England charm — you need to stay at the Hawthorne Hotel. Founded in 1925, this 95-year-old hotel is defined by its elegance and antique luxury. Nathaniel Hawthorne himself never stayed here, but entering the ornate lobby you can easily imagine Hawthorne seated by the fireplace writing The House of Seven Gables. 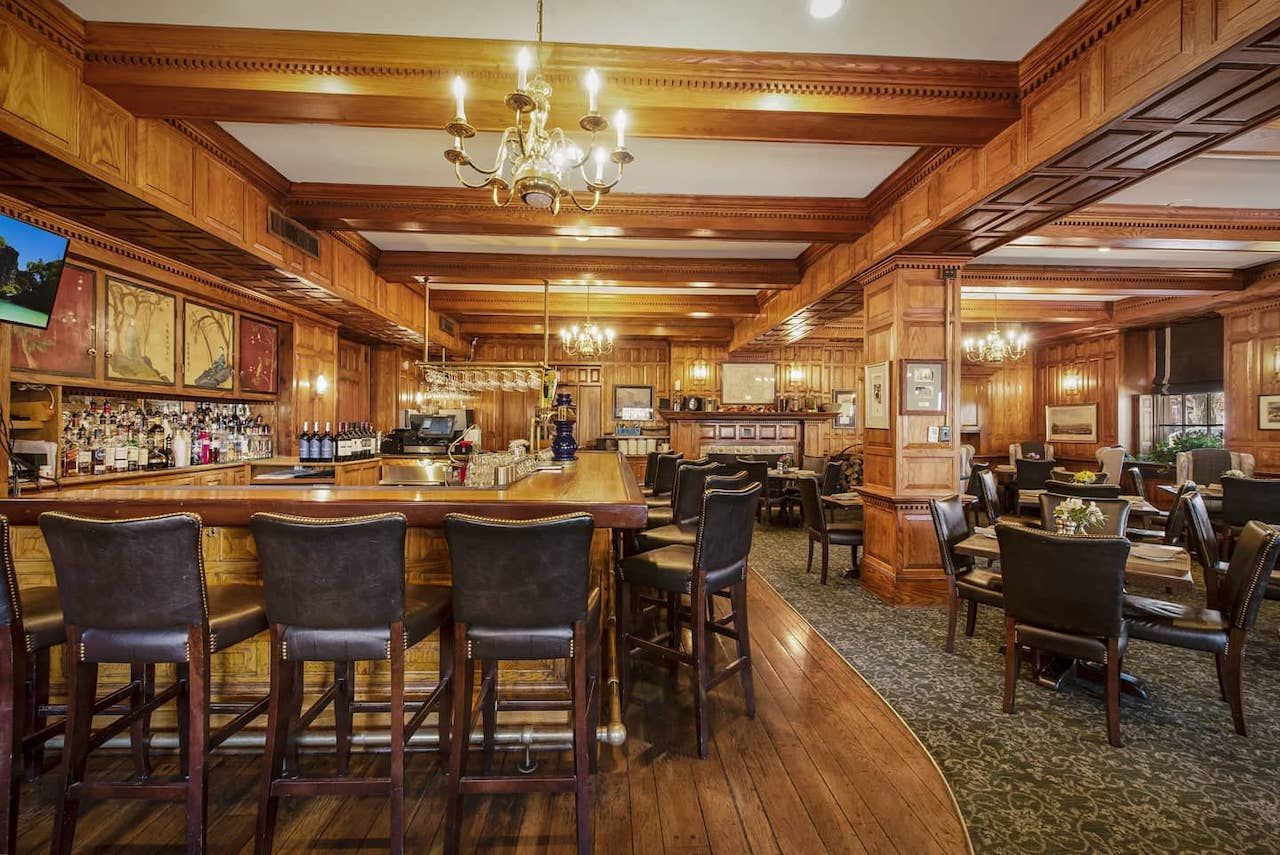 In true Salem fashion, the hotel is considered one of the most haunted hotels in the country. Many guests have reported seeing the ghosts of old sea captains returning to haunt their favorite place of gathering. In 1990, a seance was held in the hotel’s grand ballroom on the 64th anniversary of Harry Houdini’s death in an attempt to summon his spirit. Although the seance proved unsuccessful, reports of hauntings and supernatural activity at the property have been rampant, with many stories claiming that a ghostly woman haunts the halls of the sixth floor.

CultureThe 9 Most Chilling Ghost Tours in the US
Tagged
Culture Holidays Insider Guides
What did you think of this story?
Meh
Good
Awesome