Fiddled trad tunes hang in the air across Belfast, but the city is actually home to great clubs hosting everything indie folk to old-school London punk bands. Most are concentrated in the highly walkable, central part of town — known as the Cathedral Quarter — so you can step dance, grind, and mosh away even if you only have a day or two. There’s also a strong population of college students, meaning you’re likely to find something going on every night of the week across town. No matter what type of music you’re looking for in Belfast, here’s where to find it.

For trad sessions and a pint 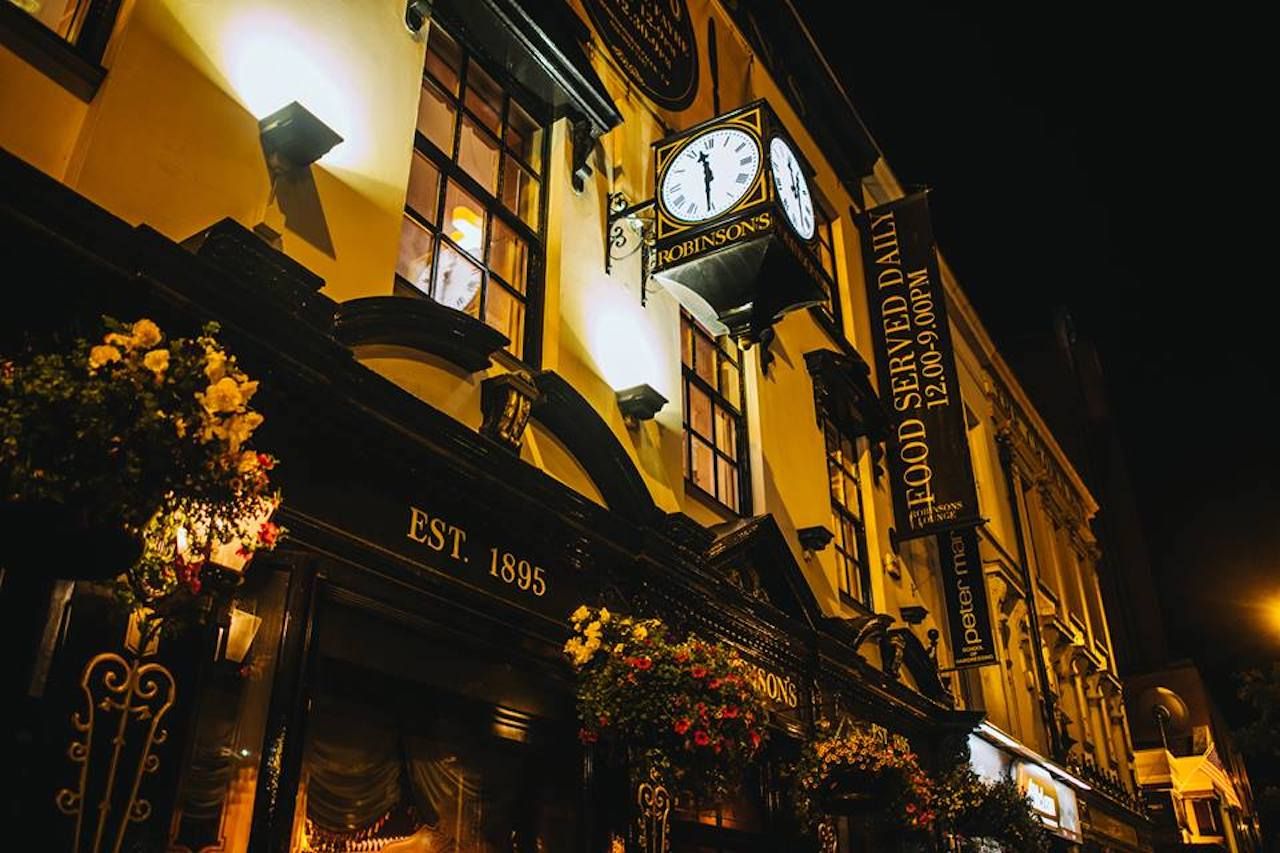 Traditional Irish music, known as “trad” on the pub scene, can be found in watering holes across the city. Experiencing a trad session is an absolute must-do in Belfast and typically involves a group of musicians huddled into a corner in a busy pub playing classic Irish tunes, while people drink their beer and dance on any free space on the floor. On weekends, it isn’t uncommon for sessions to begin in the early afternoon, and you can keep the party going well into the night by moving between pubs.

One of the most common quests in Belfast, and indeed the whole of the Emerald Isle, is the search for live trad music. Some pubs have impromptu Sunday afternoon jams, others bring in a band on weekends. The Dirty Onion makes your quest an easy one — live music, mostly trad, every single night. Add in the fact that it’s located in the oldest building in the city, built in 1680, and the fact that they never charge a cover, and there’s no reason to even bring Google into the equation.

Robinson’s provides daily trad music in its Fibber Magee’s pub and has been doing so since 1895, with four other rooms on site to complete the traditional Irish pub experience. Pints of Guinness flow in each, which include a pool hall and a traditional Irish saloon, as well as BT1, home to one of Belfast’s more rowdy karaoke sessions on Thursdays, Fridays, and Saturdays. You can warm yourself in a comfy chair by the fire and chat the day’s gossip. But before heading into Fibber’s for the trad session, have dinner at the Bistro — just don’t ask what pairs well with the Chicken Goujons or the Steak & Guinness Pie. Save yourself and the server the trouble and order a round of the black stuff.

Raising money for good causes by selling booze is a time-tested practice employed by NGOs and nonprofits the world over, and The John Hewitt has taken the concept and turned it into a business model for social good. The bar, opened in 1999, is owned by The Belfast Unemployed Resource Centre. The pub is named after the center’s founder and partially funds its mission to educate and empower Belfast residents from tough economic backgrounds. The John Hewitt features live music Monday through Saturday nights and is home to one of the city’s favorite drop-in trad sessions on Sunday afternoons. Have a drink, listen to some jams, and feel good while you do it.

For rock gigs and the indie scene 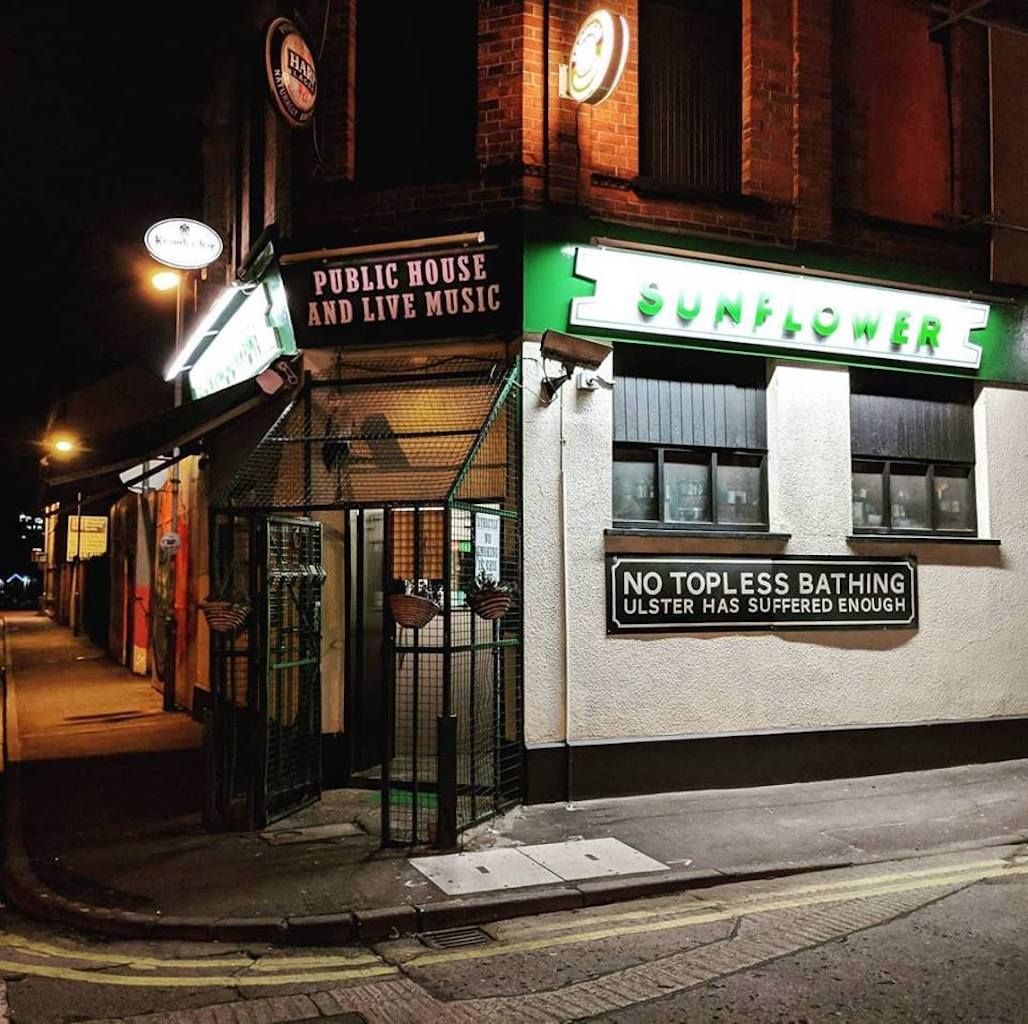 Belfast’s music scene draws influence from London, Dublin, and beyond, and blends in the unmistakable personality of the city and Northern Ireland. Clubs line the Cathedral Quarter and Queens Quarter, serving a variety of music on a nightly basis.

Voodoo is a rock club and mohawk hangout that wouldn’t be out of place on Bourbon Street, accentuated by the vibrant reds and maroons that cover the place. It also serves Cajun food like gumbo to complement. This means you can get your spicy food fix — not an easy thing to do in Belfast — before you headbang to the hottest rock bands in Northern Ireland. Voodoo hosts everything from metal to modern rock to British ska, depending on the night. Music happens upstairs while the bottom floor of the club is the place to pregame or pop in for a quick nightcap.

When the night calls for diving into craft brews and mellow live music, Sunflower Public House is the spot. You might find a local singer-songwriter or there might be a folk rock band on the road from the States, but there’s always someone playing, and the beer menu is as good as any in town. They also host an open-mic night on Mondays and often have trad music as well. The pub is located in the western part of the city not far from Falls Road and Shankill Road, and even today, it has the original security cage from the Troubles out front of the main entrance.

The Black Box is the place to get intellectual. The club is about 50 percent music venue, with the remaining 50 percent split equally into writer’s bar and ultra-weird film house, and is generally filled with a collection of interesting characters. They host some great bands — often ones you’ve heard of if you follow the UK rock scene, and you can always bet on something going on here in this Cathedral Quarter club. It’s a come-as-you-are kinda place and one of the easiest ways to have a chat with a local college kid who won’t be shy to tell you his thoughts on the band, the drink specials, and the famous street art of the surrounding neighborhood. 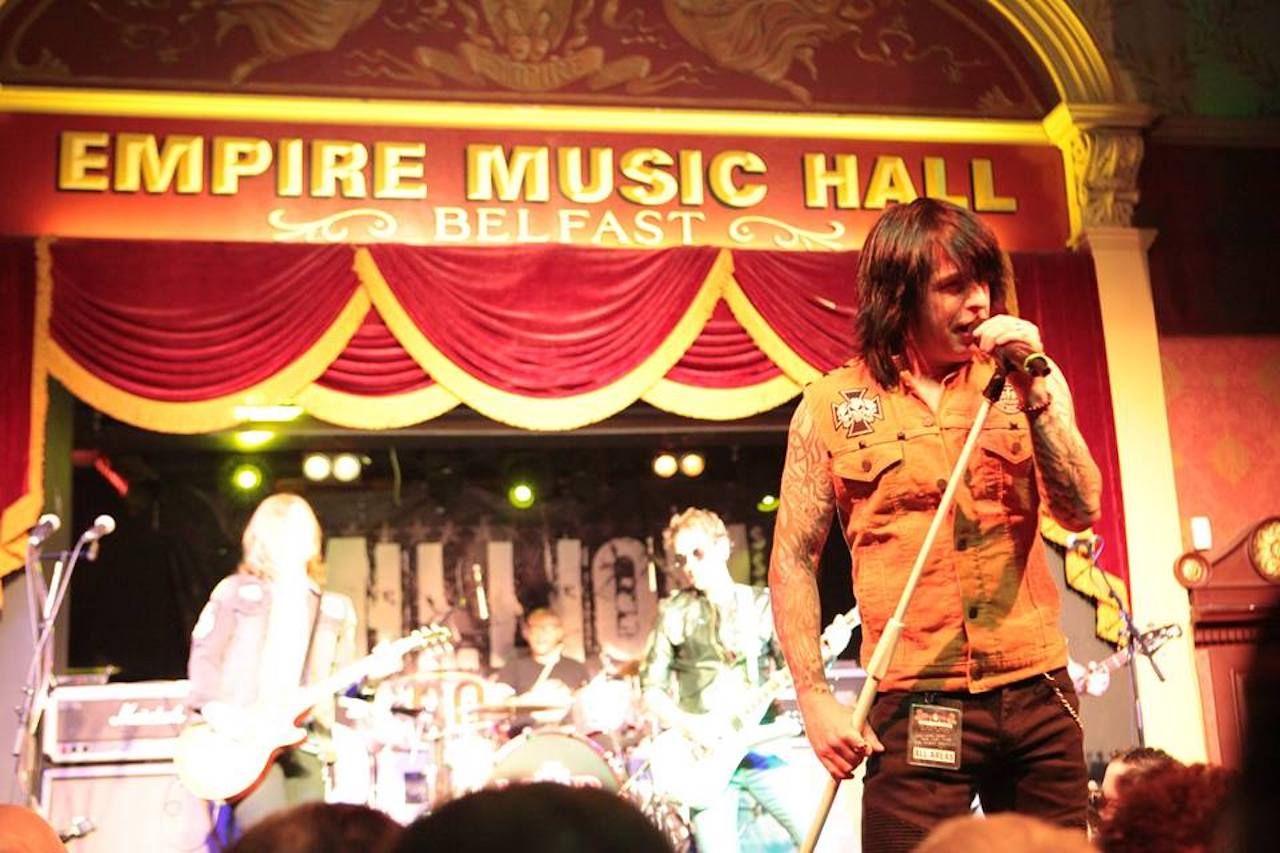 Belfast’s classic theatres and large-scale venues make it a regular stop on European tours for bands from both sides of the pond.

Most simply call it The Empire, and this is the type of place where both grit and nostalgia run deep. The music hall at The Belfast Empire packs nearly 500 eager fans into its quarters to catch mid-level touring acts on the verge of becoming defining names in their genre, cover bands such as the UK Guns & Roses and The Bon Jovi Experience, and the cream of Belfast’s local scene playing to their base of frenetic locals and college kids. If you’re walking through the Queen’s Quarter looking for something to do at night, stop by The Empire — there’s usually a crowd out front, and you’ll hear the tunes booming through the doorway. Each Tuesday the clubs turns its focus to comedians for the Empire Laughs Back comedy series, an equally popular attraction.

Limelight draws ticketed crowds out to catch the best names in Indie, hip hop, and beyond. The spot, off Ormeau Ave, brings in both up-and-coming indie bands recently big enough to headline a raucous party on their own and big names like Oasis and Steve Aoki looking to do an intimate gig for their fans. The club also tosses in the occasional comedy show for good measure. Limelight is split into two clubs, aptly named Limelight 1 and Limelight 2, and on a good night, the entire place is packed and rowdy. If you need to give your ears a rest, head upstairs to the rooftop Rock Garden, a good place to mix with players from the music scene even on nights when the clubs aren’t hosting big names.

Every good city has that one club that has forever left its mark on the heart of longtime locals. The one where you saw your favorite band play in high school. In Belfast, that club is Ulster Hall, and odds are that your favorite band is playing there on their next European tour (seriously, check the calendar). The club is historic, originally built in 1859 and owned by the local city council. Even if you don’t catch a concert, walk by the hall on Belford Street and take a photo of its classic facade. It’s home to the Mulholland Grand Organ, the oldest traditional English pipe organ still around, and has been the jumping off point for many political rallies and causes over the years.

The 6 Best Places for Breakfast in Belfast