Not that I’m a big deal, mind you. But if I HAD been a big deal, and the woman waiting for me on the LAX jetway had been holding a sign saying “BIG DEAL,” well, it may have caused some commotion.

Which explained why the woman held only a sign that read, “The Private Suite,” then just gave me a knowing nod and silently led me off the jetway and onto the tarmac.

Thus is the beginning of the adventure at The Private Suite, an ultra-exclusive, high-priced airport terminal for the rich, famous, or just generally misanthropic. The suite offers private check-in, security, and customs and immigration screening, as well as transportation to the literal front door of your aircraft. As a client, you never see the inside of the airport. 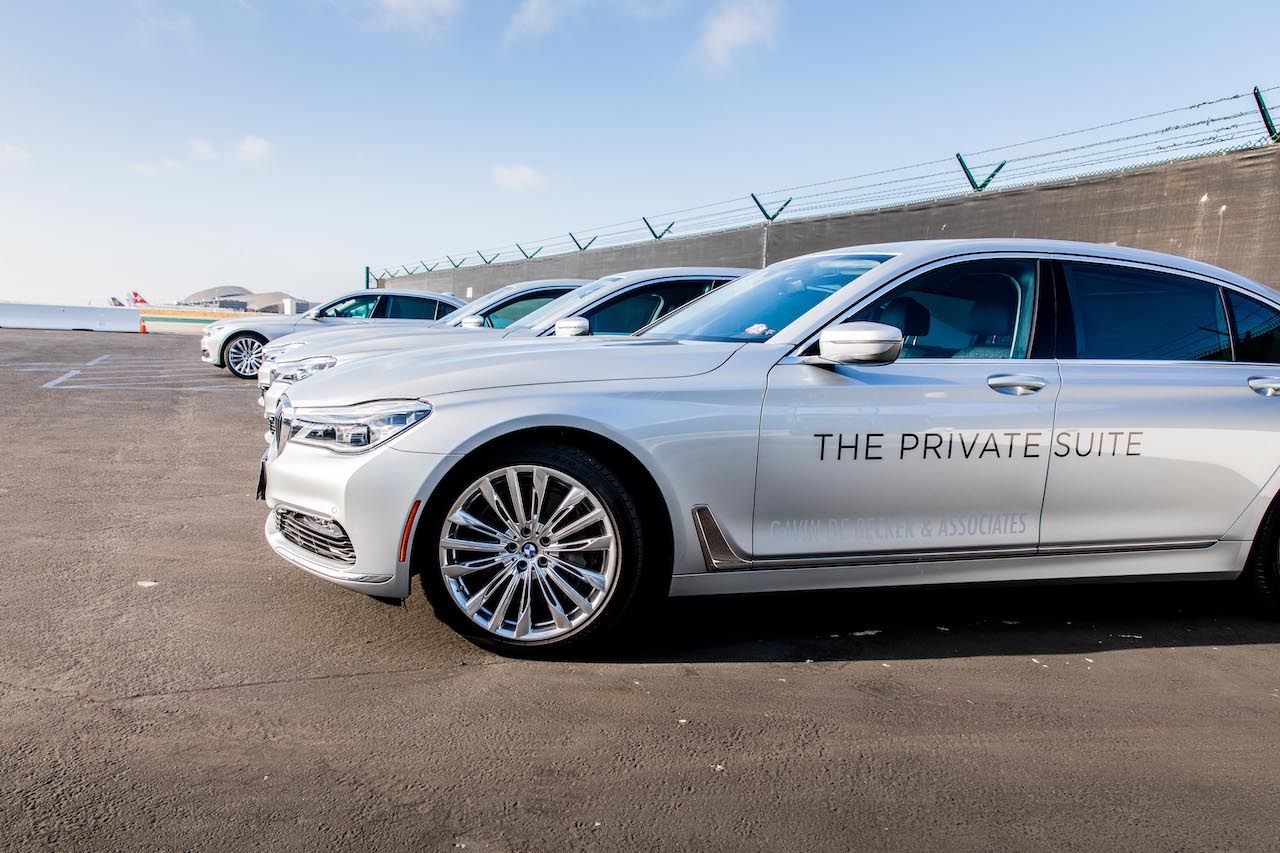 It debuted at LAX a couple of years ago, designed primarily for people who fly private domestically, but opt for commercial for long international flights since flying private involves stops for refueling, less room, and other elite inconveniences. Celebrities are the obvious market, but it is open to anyone who can afford the price tag, which isn’t low.

The hoi polloi — or at least the ones with money — can book the fully stocked suite for $3,500 a flight ($4,000 for international), but it won’t come with the barber, masseuse, or the ability to pre-order your lunch.

The obvious question is, “Is it worth it?” And at the invitation of the Private Suite, who didn’t ask me to pay for any of it, I went to LAX to experience it like a member might. 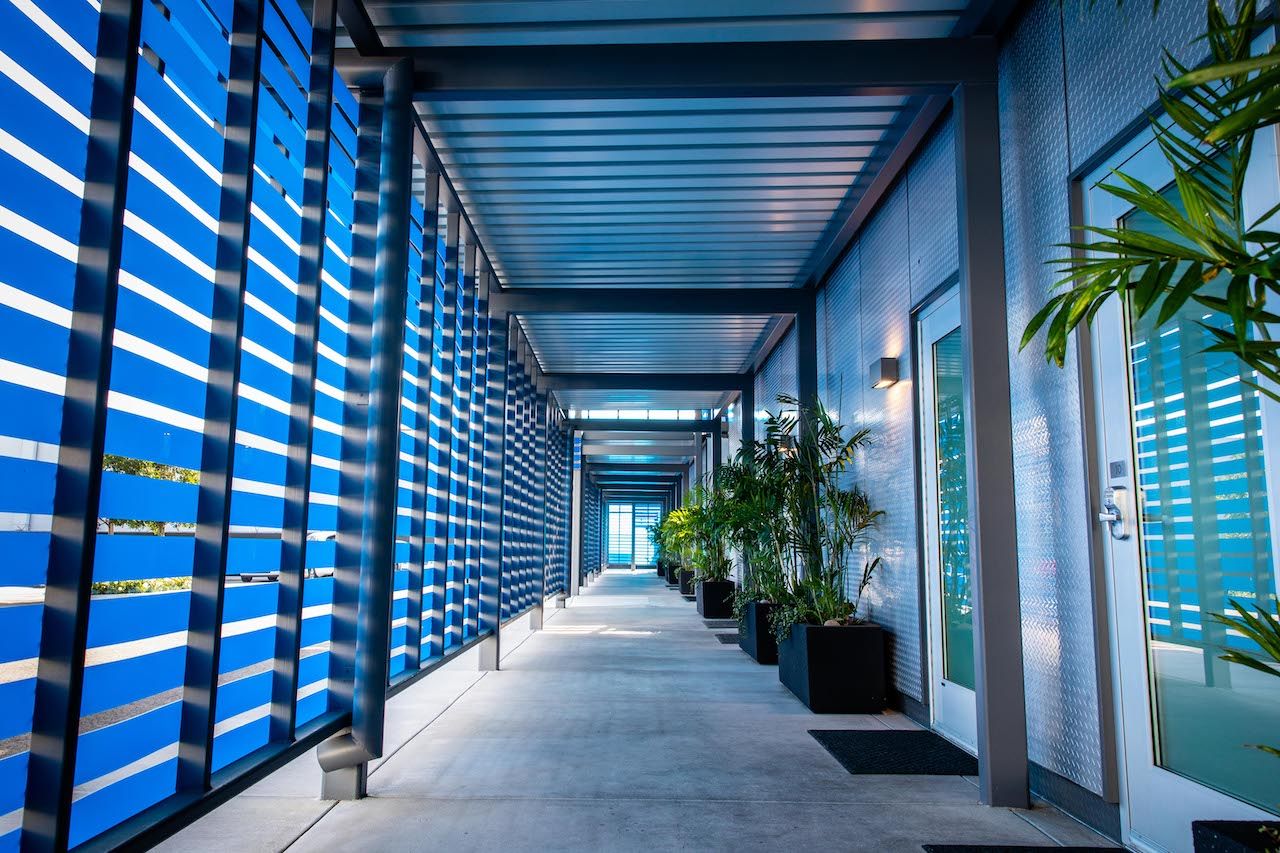 After being hurried down the stairs outside the plane door like Spencer Pratt escaping paparazzi, I walked to the end of the plane where a large BMW sedan waited and quickly took me as far from the masses of LAX as possible.

We crossed the tarmac, dipping under planes and watching takeoffs from the end of the runway, to a nondescript back driveway. It had the feeling of driving onto a studio backlot, down an unoccupied road flanked by small brown hills and a blue sky.

After about 10 minutes, we reached the suites: a small, one story building on the border of the airport and Imperial Highway. It looked a little like an old motel renovated into a sleek, boutique property.

Prior to arriving, I’d been sent a welcome email that included a food menu from Wally’s in Beverly Hills, a list of in-suite services, and a place to enter flight information. In that section I found a drop-down box for “Class of Service” with only first, business, and “other” offered. Apparently not many coach fliers also opt for jetway valet service and lunch from Wally’s. 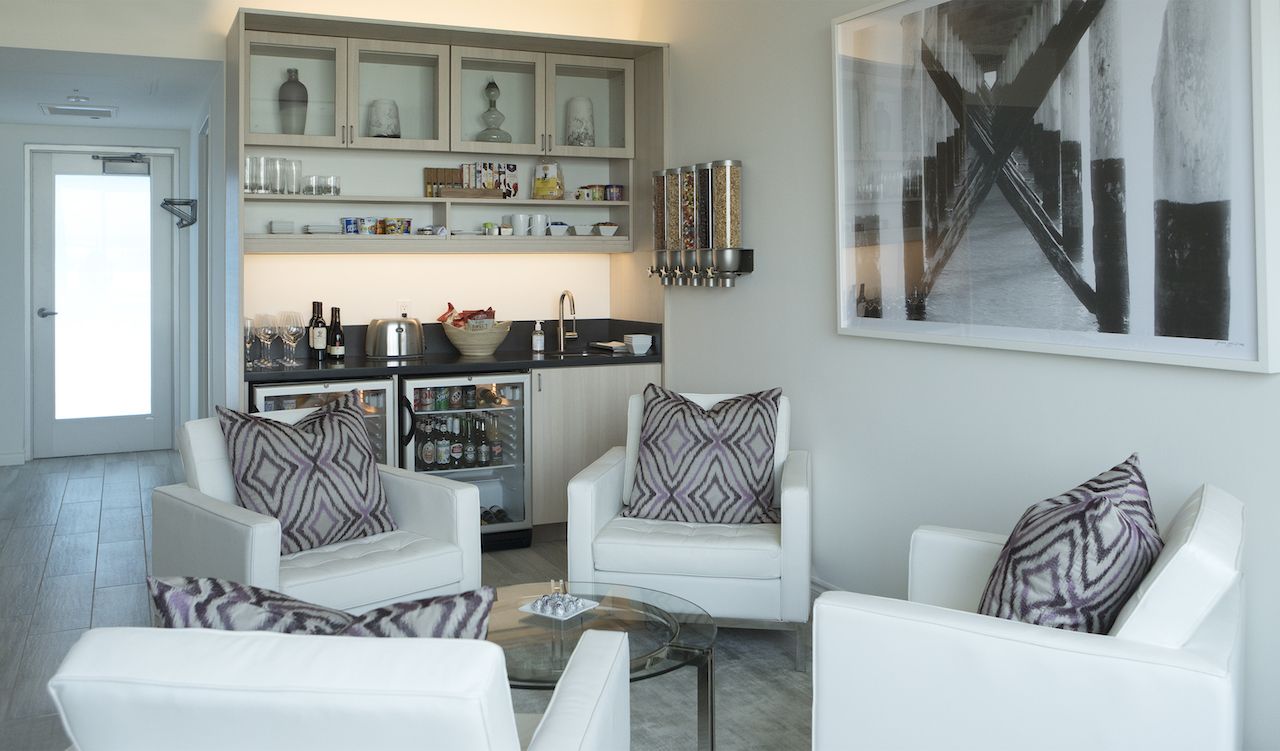 But I did, and when I arrived at the suite, my lunch of chicken tortilla soup, chicken club sandwich, and chips and salsa welcomed me. It was warmer than 98 percent of the orders I’ve gotten from Uber Eats.

The suite itself could have been the living room in a lifestyle-forward, all-suites business hotel. Slim yet cushy chairs surrounded a circular table, a few feet from a bar fully stocked with soda, local beer, wine, and Veuve Clicquot.

Above the bar were more mini bottles of liquor than any single human could drink, with all the appropriate mixers. The walls had candy dispensers with M&Ms, Skittles, and Hershey’s miniatures.

“For the kids,” my attendant told me. 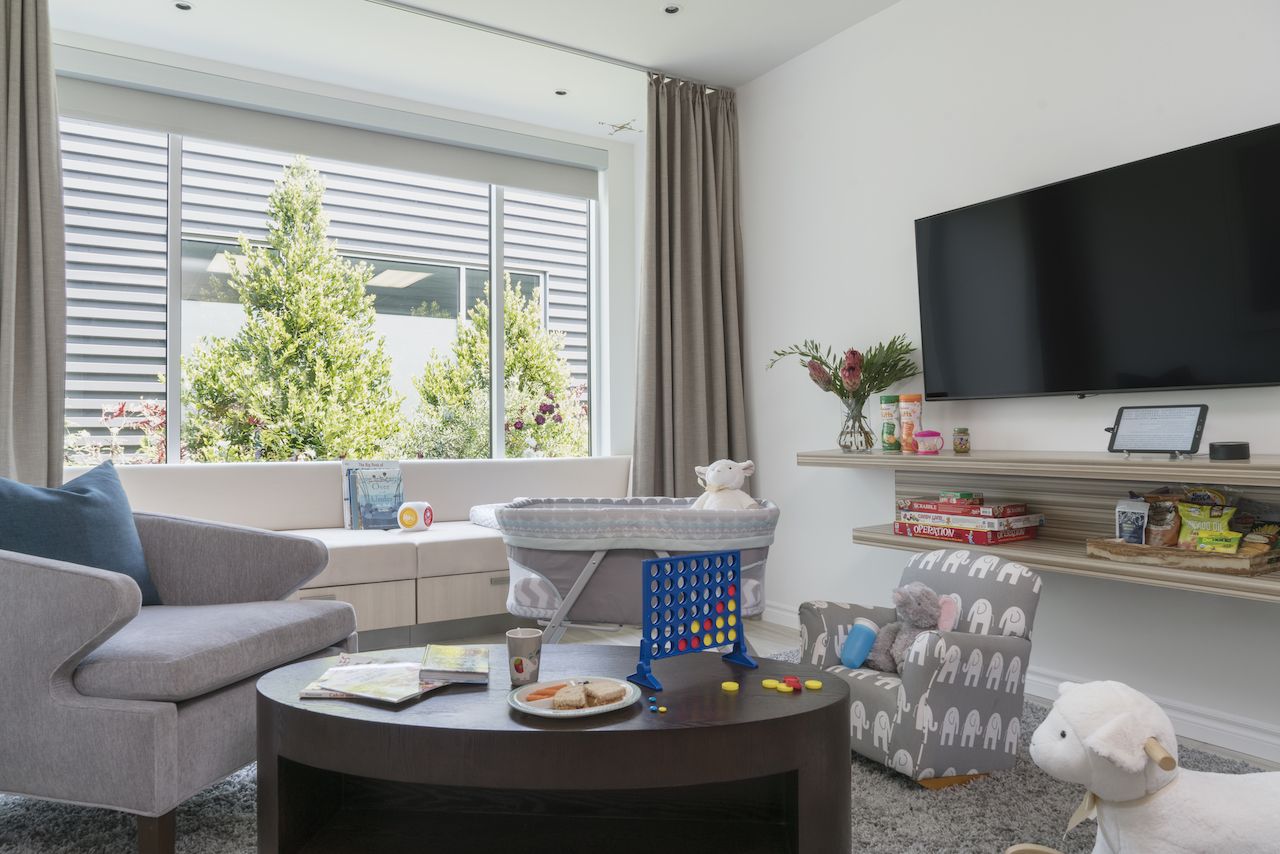 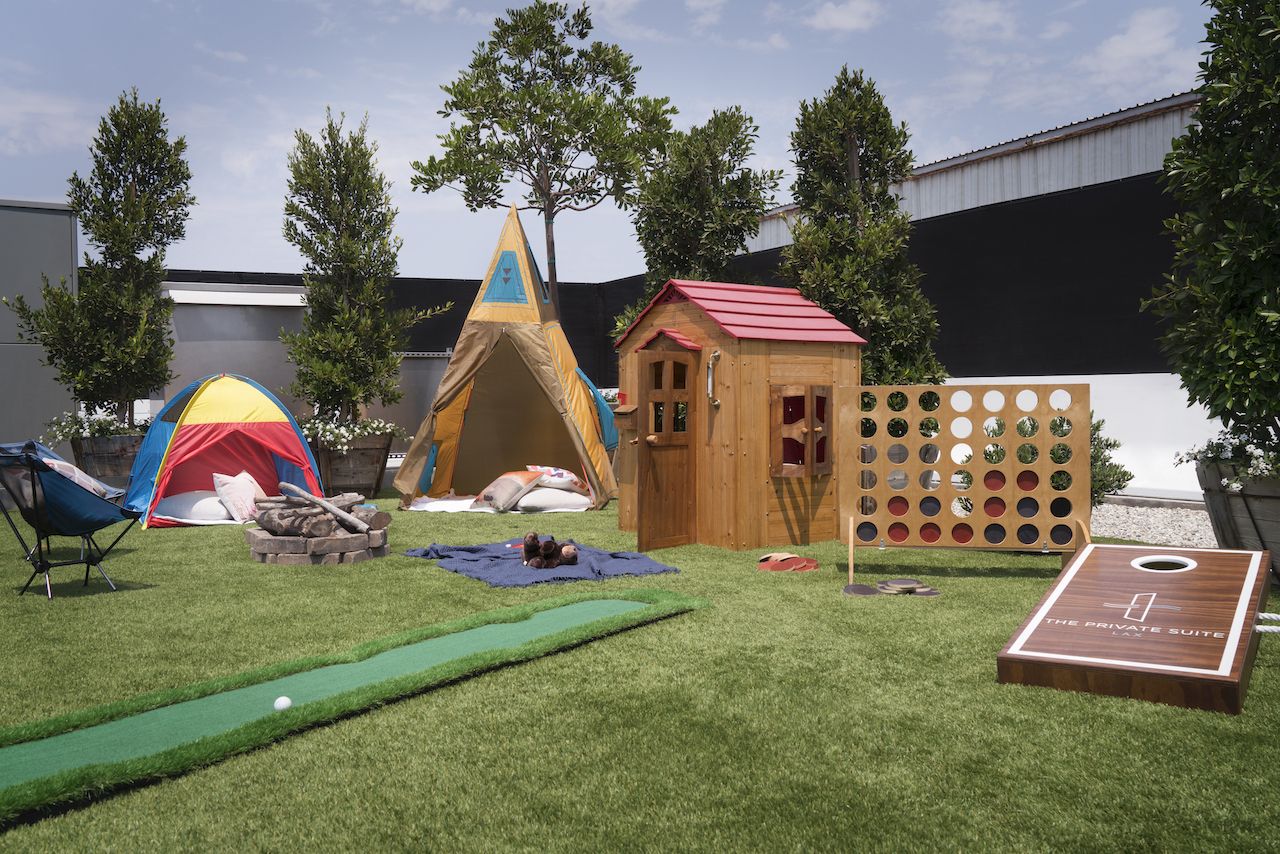 There’s also a whole host of games, toys, cribs, kid-friendly snacks, and an outdoor playground (with a cozy fire pit for the adults), should you be traveling with your equally famous progeny.

The bathroom had a venerable health and beauty aisle of products. So if you’d forgotten your toothbrush, or mouthwash, or just wanted to grab some condoms without enduring the judgment of your local Walgreens clerk, the Private Suite had it covered.

Grooming and relaxation to end a long trip 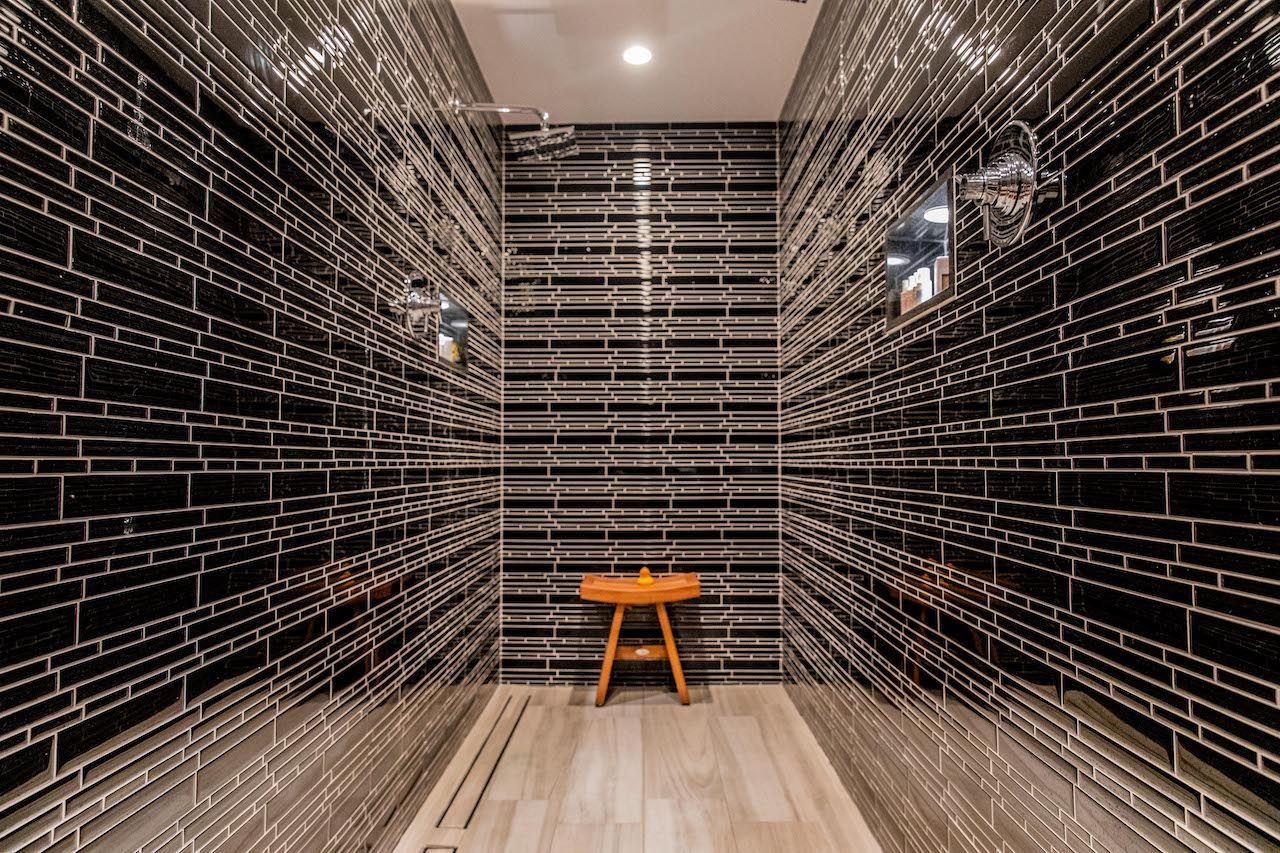 Once the attendant left, I cracked open a bottle of Stag’s Leap cabernet and sat down to my lunch. After about my third slurp of soup, the phone rang.

“Your haircut is ready in the next suite, whenever you’re ready Mr. Meltzer,” the voice on the other end told me. “No rush.”

Also prior to my arrival, I’d received an email explaining the variety of services available to me. Manicures, massages, haircuts, shower spas, a car wash, and probably a Flemish interpreter, if I’d really needed one. It turns out that I didn’t need a Flemish interpreter, but I did need a haircut. So I thought I’d see what kind of haircut a $3,500-a-day room comes with.

After lunch, I walked into the suite next door and found a barber who looked a little like Snoop Dogg minus a foot waiting behind a makeshift barber’s chair. Even lacking a mirror, he did an exquisite job. The kind of people who use the Private Suite, he told me, aren’t dealing with a bad haircut. 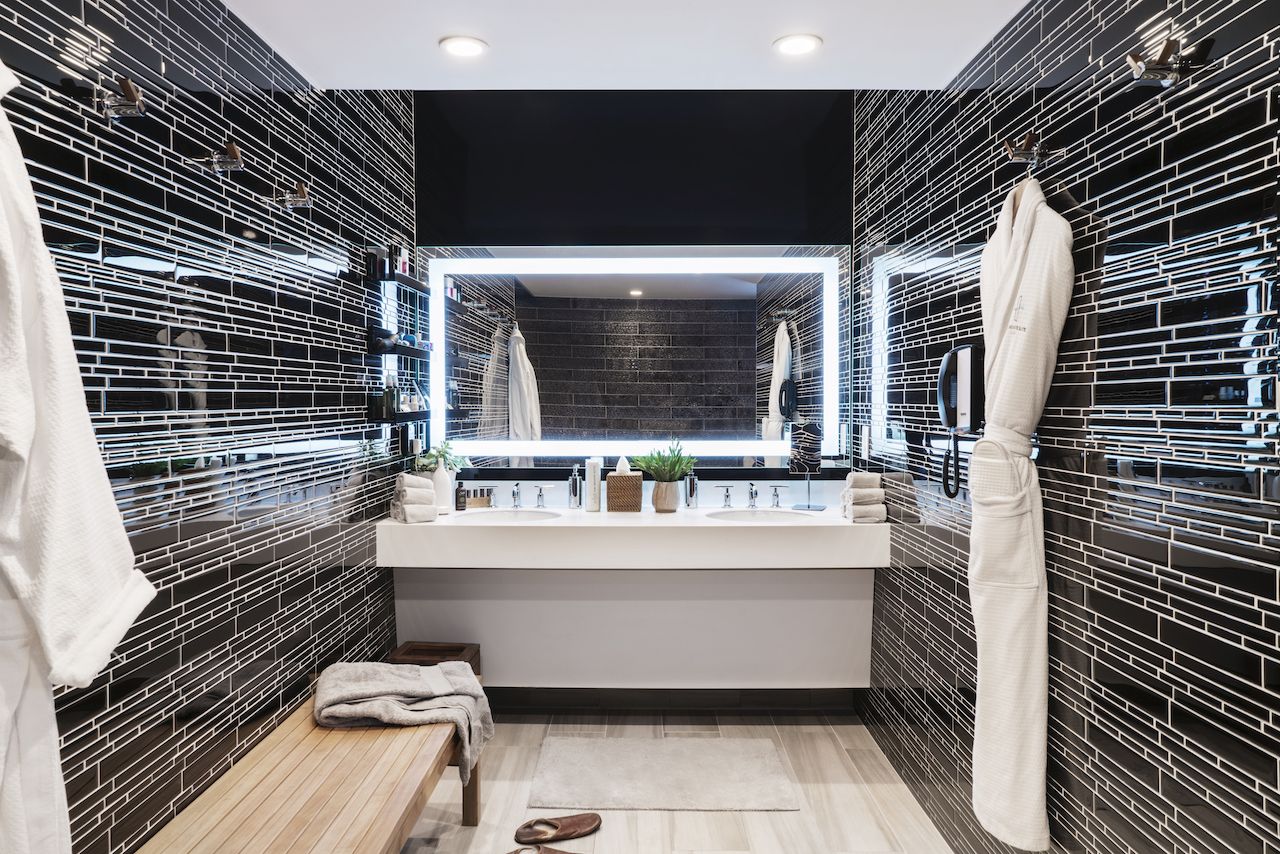 Half an hour later, we were finished, and I returned to my suite where a masseuse awaited. The Private Suite doesn’t offer full-body massages, but the 30-minute chair variety was welcomed after a cross-country flight.

Before heading out, I was tempted by the bottle of Veuve and the organic chicken strips on the menu. Few things in life will give you a bigger case of Imposter Syndrome than calling a personal concierge with a glass of expensive Champagne in hand and saying, “Yes, I’d like to get an order of chicken strips…no not wings, strips. With ranch.”

The strips arrived quickly, I ate them, and it was time to go. I bid adieu to my little slice of airport heaven, took in the view of the tarmac one last time, and headed out to the parking lot where my ride was waiting. My checked luggage, collected from the plane, was already inside. 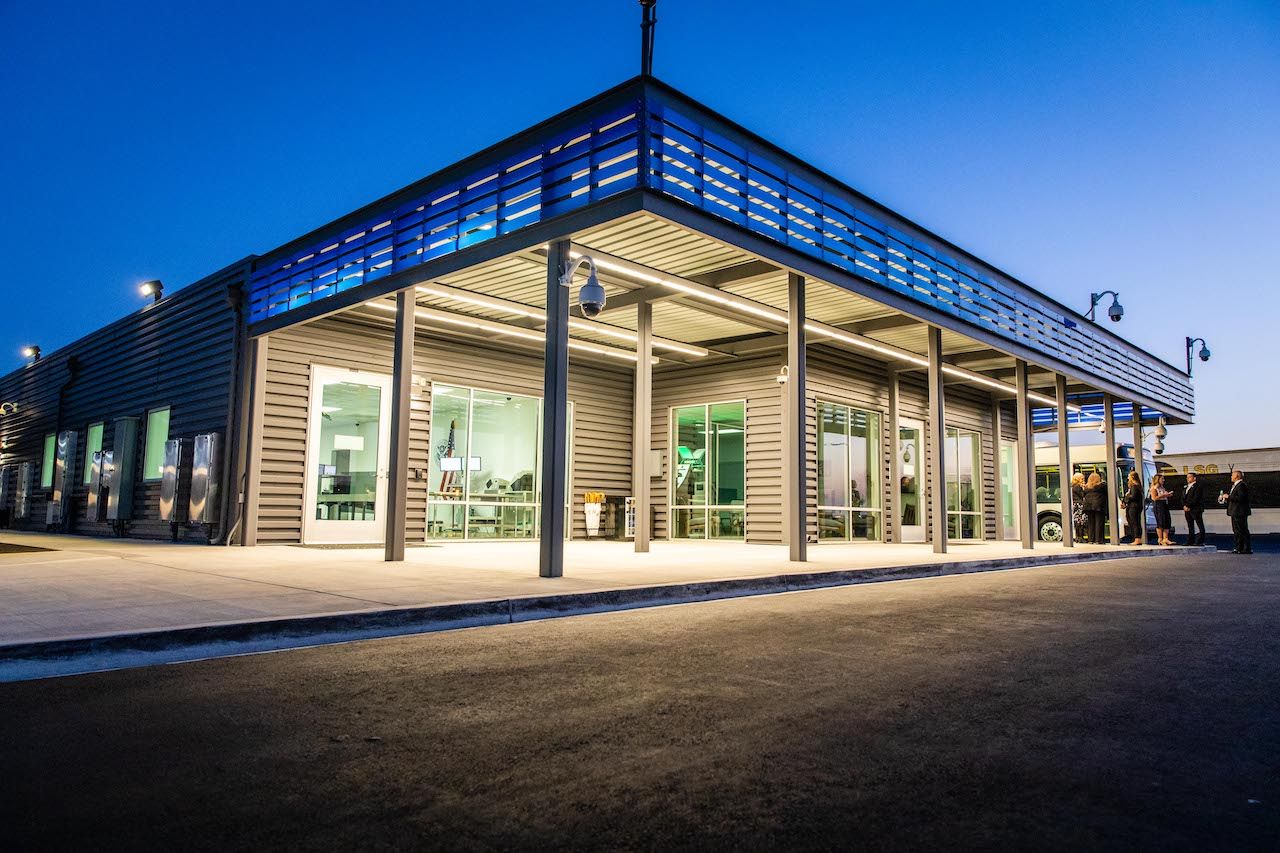 My answer is that it entirely depends on your definition of “worth.” Or, more specifically, the numbers associated with your particular “worth.”

If your net worth is low, like mine, $3,500 is a lot of money. It’s almost twice my rent. Blowing that to skip TSA or baggage claim and enjoy some chicken strips would be a foolish waste of money.

HOWEVER, say I made 10 times what I currently make, then this would be more like me spending $350. And for that much, it’s worth the occasional splurge.

If I made 20 times what I make — well into the seven figures — it’s absolutely worth it, as going to the airport then becomes an indulgent, luxury experience rather than a hassle. You never see a security line. You never wait for a bag. You never even wait at passport control. And if you’re a celebrity, no screaming fans. Plus, you’ll have a room full of booze, massages, and chicken strips waiting for you upon arrival. Take that for what it’s worth.

WellnessThis Bed Costs $189,000. We Tested It To Find Out, Good God, Why?
Tagged
Airports + Flying Luxury Travel Los Angeles, CA, United States
What did you think of this story?
Meh
Good
Awesome