Los Angeles is a creative capital that fizzes with the industrious creativity of a city that deals in dreams. From museums to its place in the movie industry to incredible LA-area bars and wineries, the City of Angels has it all. And for visitors, the mood of your trip will largely be defined by where (and what part of this sprawling metropolis) you stay. These eight hotels across the greater LA area capture the regions’s many faces, from trendy boutiques to timeless celebrity haunts that drip with the classic luxury trappings of golden era Tinsel Town.

We hope you love the stays we recommend! Just so you know, Matador may collect a small commission from the links on this page.

In this uber-luxe part of town, where Rodeo Drive meets Wilshire Boulevard, looking good is currency. The timeless Beverly Wilshire keeps up appearances with a modern take on old Hollywood glamor. The Wilshire Wing lobby has a sumptuous chandelier comprised of over a thousand Swarovski crystals, and an in-house florist changes the lobby’s oh-so-Instagrammable floral displays every Friday. Even before it became famous as the backdrop for Pretty Woman, the Beverly Wilshire was a popular choice for US presidents, Hollywood (and genuine) royalty, and extraterrestrial apes (Escape From the Planet of the Apes was filmed here too), but you don’t need to be a celebrity to receive five-star service. Polite, congenial, and far less stuffy than the immaculate cut of their suits suggests, the long-serving staff are the beating heart of this landmark Los Angeles hotel. 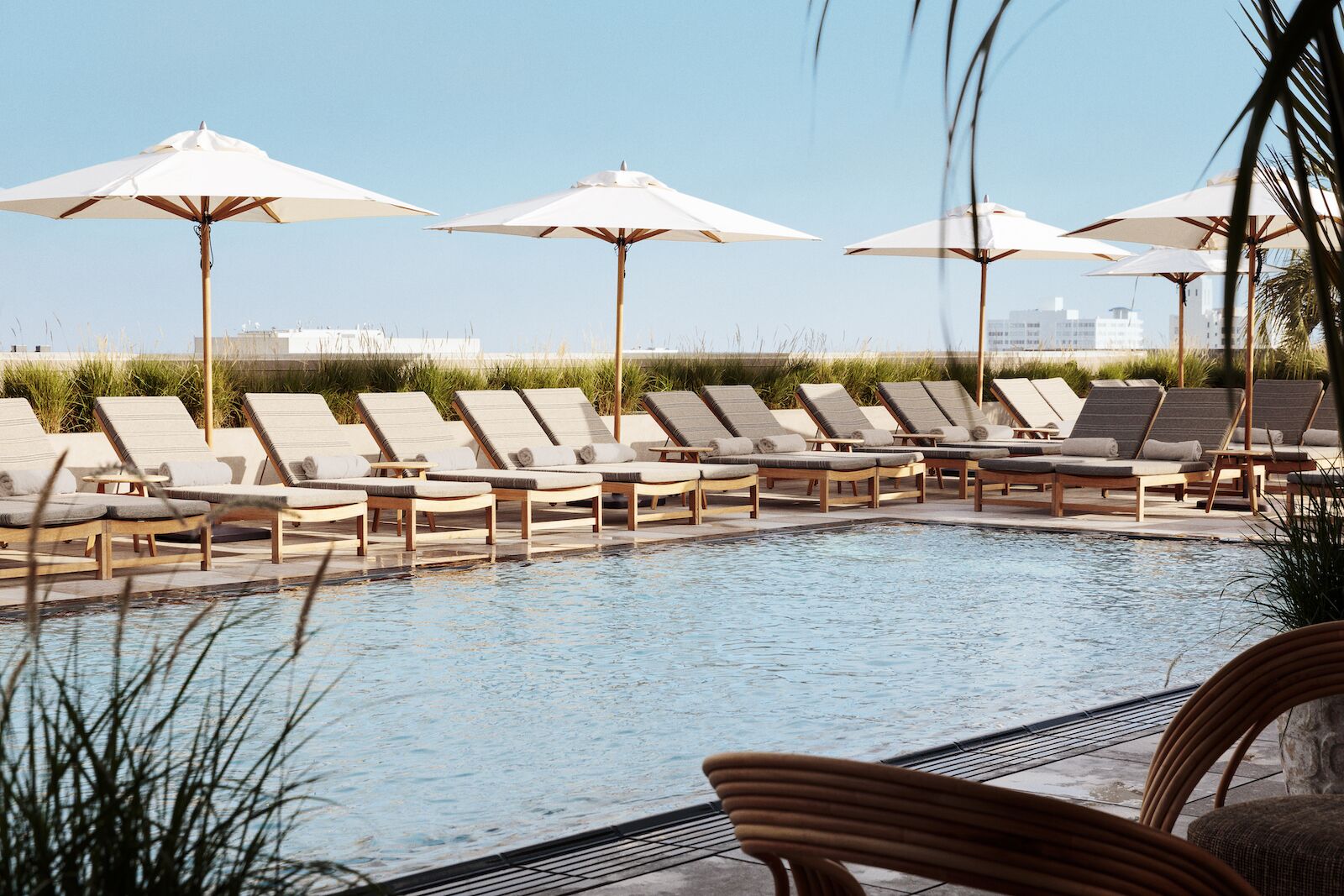 The Santa Monica Proper’s laidback take on luxury is perfectly encapsulated by the breezy charm of its youthful staff, who are all dressed down in sandy tones to match this design-led hotel’s beachy aesthetic. Organic materials, canvas wall sculptures, and wooden vintage furniture were thoughtfully chosen by interior designer and Angeleno native Kelly Wearstler with the Proper’s coastal location in mind. Although the hotel might not be directly on the waterfront (the beach is just a few blocks away) the ocean view from its Mediterranean rooftop bar and restaurant, the Calabra, is second to none. The homemade hummus with smoked paprika oil is a must-try but beware the signature cocktails: the Americabo is dangerously delicious. 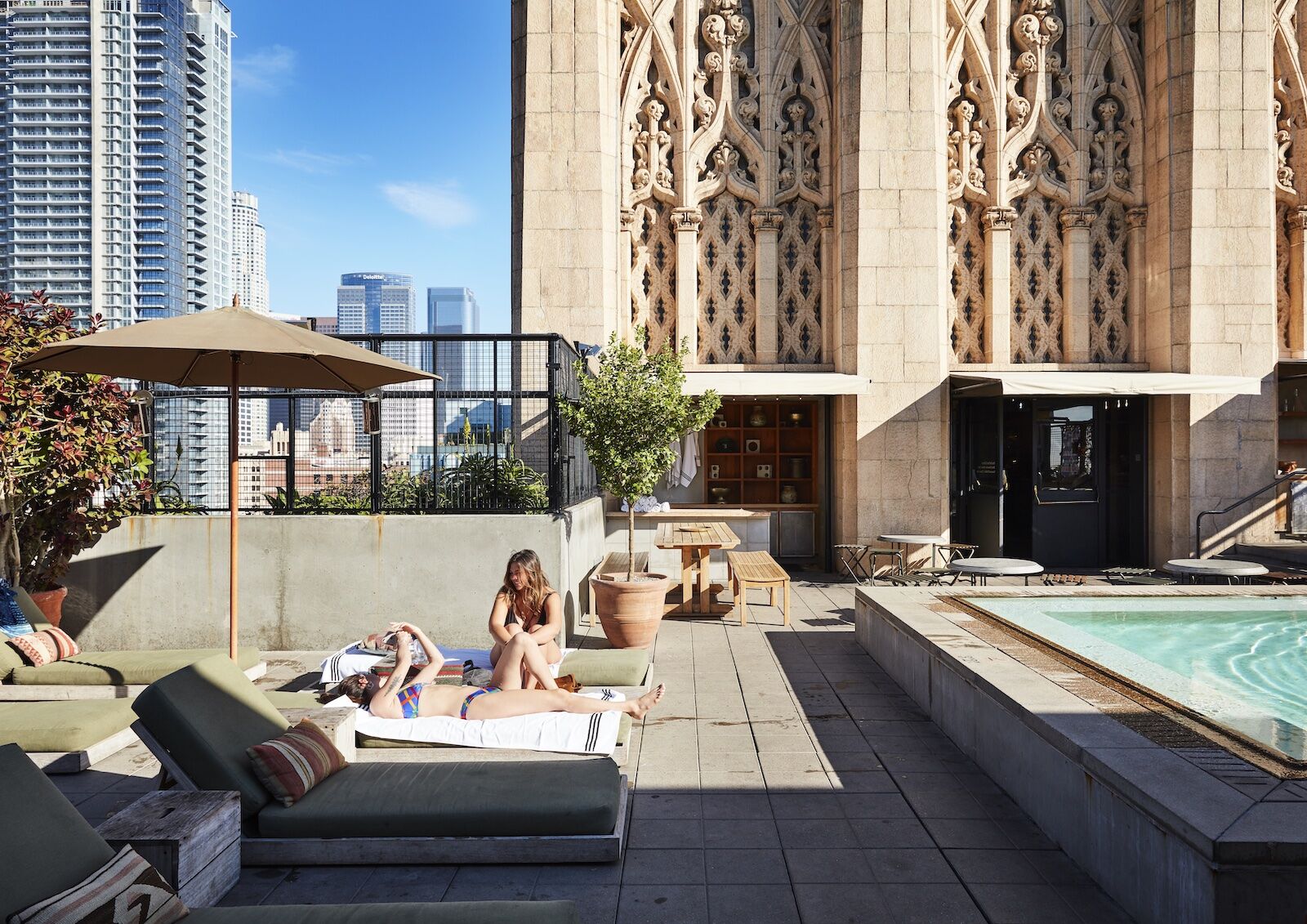 A famous hangout for the creatively inclined, Downtown’s towering Ace Hotel, with its ornate stonework exterior, rooftop spires, and neon signage, could well have been plucked straight out of Batman’s Gotham City. Inside, rooms are deliberately stripped back to suit the shabby-chic style. But don’t be surprised to find a Martin acoustic guitar propped up in the corner, or a vintage record player with a curated vinyl collection. Ace’s crown jewel is not a bar or rooftop pool (though it has both) but the splendid 1,600-seat theatre adjacent. Formerly the United Artists Theatre, this lovingly restored 1920s movie palace hosts grand concerts, film premieres, book launches and an annual Drag Queen Christmas: the ultimate testament to LA’s varied and enviable arts scene. 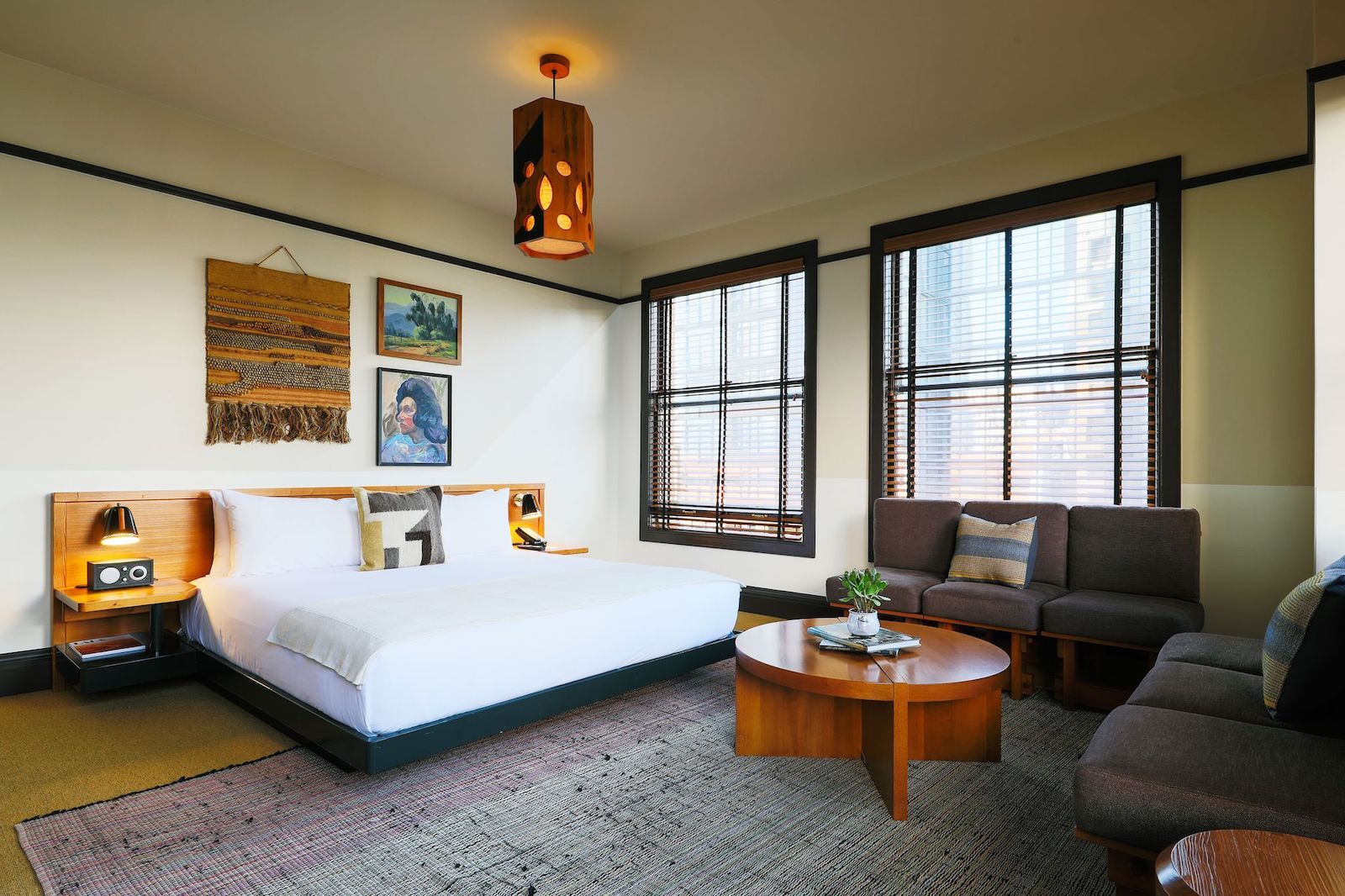 Housed in Downtown’s grand Commercial Exchange Building, the Freehand Los Angeles blends the easy-going community-driven culture of a hostel with all the comforts and more of a boutique hotel. Design studio Roman and Williams, who started out crafting Hollywood film sets, have artfully upcycled the iconic 1920s building by accenting its original architectural quirks with popping colors and an abundance of California cacti, leafy ferns, and other native greenery. Indie vibes, spacious communal areas, and affordable prices (shared rooms start at $39, doubles at $166) naturally attract a young crowd, but the Broken Shaker, the Freehand’s award-winning cocktail bar on its rooftop pool deck, is a major draw for Angelenos of all ages. 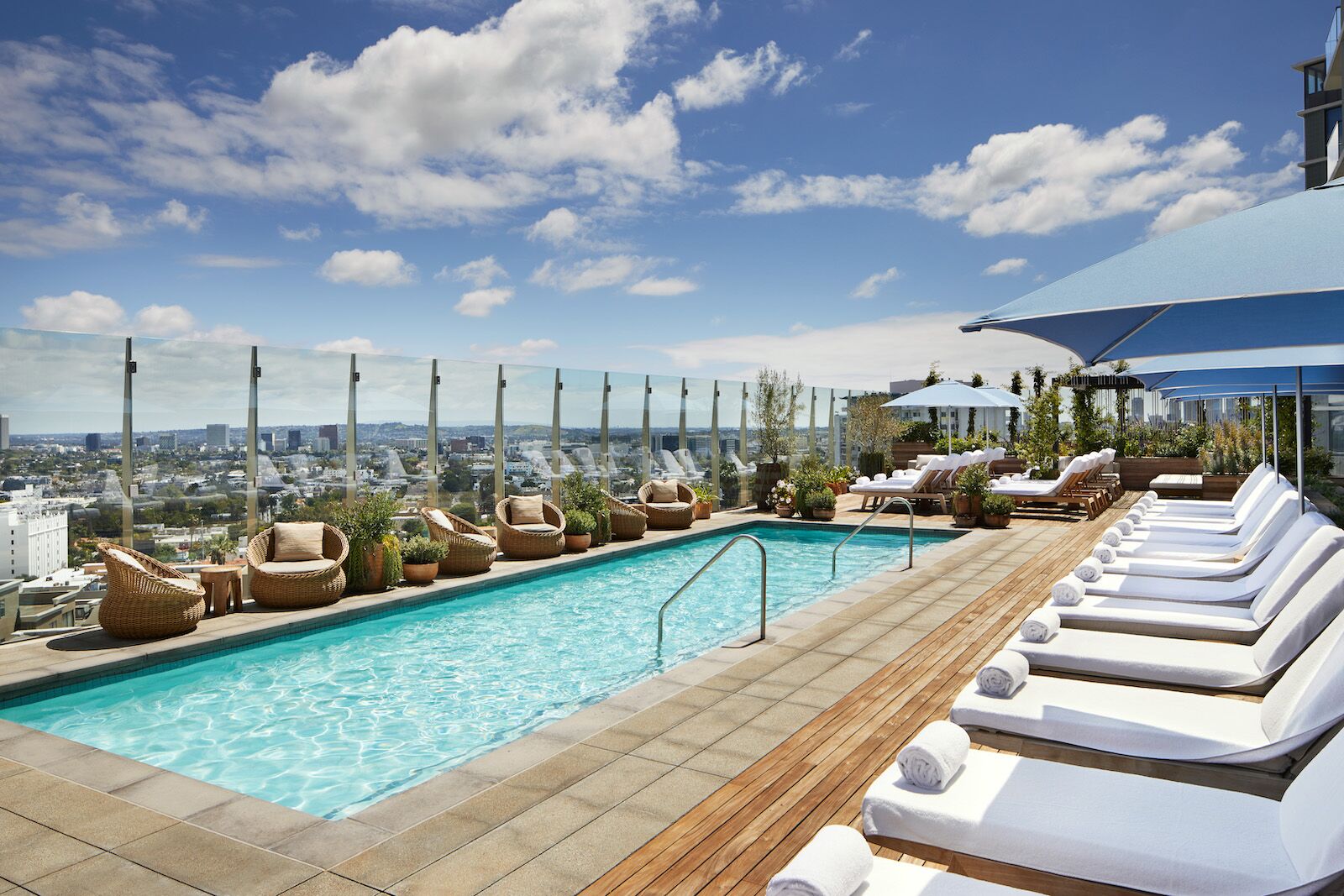 Blink and you might miss the 1 Hotel West Hollywood. Folded into a corner on bustling Sunset Strip, the 1’s subtle entrance is dwarfed on either side by gargantuan billboards, which makes stepping inside feel like discovering a luxury hidden oasis. Even before it became an industry buzzword, wellness has been at the heart of the 1 Hotel brand’s philosophy: the signature leafy interior décor invigorates, and the state-of-the-art fitness centre offers complementary exercise and wellness classes. There’s even a gym studio here for your face (Selena Gomez swears by it). Eco-friendliness is also key — quite literally in the case of the recycled wooden room keys. In fact, everything from the cupboards to the reception desk has been fashioned using reclaimed wood from naturally fallen neighborhood trees. For the socially conscious traveler looking for a hotel that can pull off sustainability with style, this is the 1. 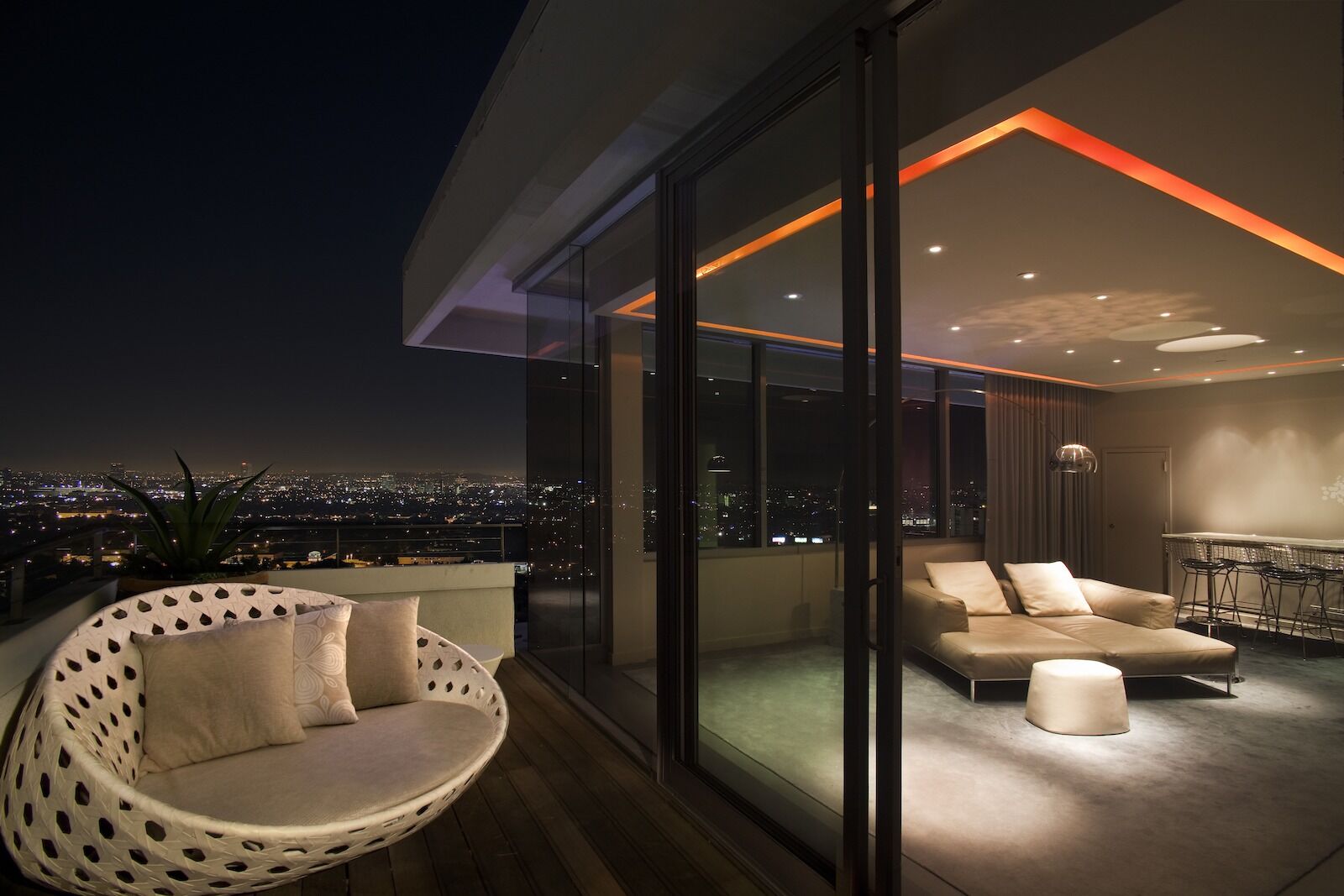 When Sunset Strip was ruled by rockstars in the 1970s and 80s, this hotel was their most notorious stamping ground. Today, the Andaz West Hollywood has dialed back on the debauchery. Led Zeppelin no longer race motorcycles in the corridor, and you’re unlikely to find Keith Richards launching another television set from a tenth-floor balcony, but there are affectionate nods to its rock ‘n’ roll legacy throughout the hotel. An exhibit on the first floor features original artworks inspired by the lyrics of classic records, while the restaurant’s name, The Riot House, is taken from the moniker given to the hotel in its heinous heyday. Bedrooms are minimalist but comfortable and adorned with portraits of the legends who made this property (in)famous.

Shutters on the Beach 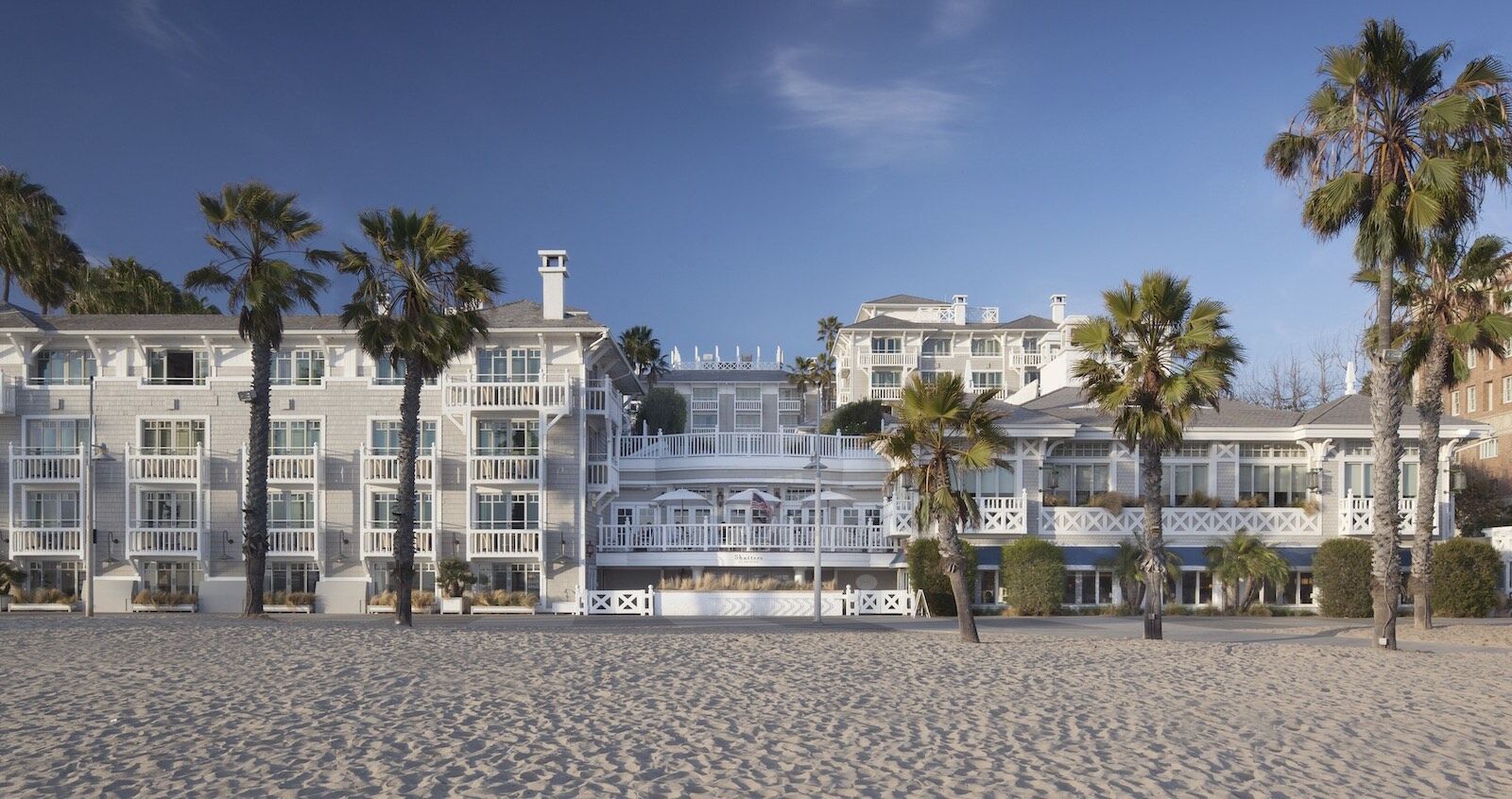 Photo: Shutters on the Beach

With its white washboard façade, soothing sea views, and bedrooms bathed in a nautical palette of blues, greens, and creams, Shutters on the Beach channels the mood of a Cape Cod beach house and infuses it with some South Cali charm. Brunch on the oceanfront at the hotel’s 1 Pico Restaurant and Courtyard, where the Pacific harvest menu offers seasonal California cuisine, before retiring to the pool terrace and enjoying the ocean breeze from the comfort of your hand-crafted cabana. If you do feel compelled to leave this seaside hideaway, borrow one of the hotel’s bicycles and peddle along the waterfront to the Santa Monica Pier or the Venice Boardwalk, both just a stone’s throw from the doorstep from Shutters, LA’s finest ocean-facing hotel.

It doesn’t get more Hollywood than the Roosevelt. With a privileged spot on the Hollywood Walk of Fame, this is where the first Academy Awards were hosted in 1929, and since then everybody from Charlie Chaplin to Matthew McConaughey has signed the guestbook at this chic luxury hotel which lovingly preserves the glitz and glamor of Hollywood’s Golden Era. There’s a steakhouse, weekly cabaret, classic cinema nights, and a speakeasy-style cocktail lounge with its own bowling alley, not to mention an outdoor pool exhibiting a $1 million underwater painting by David Hockney. It’s easy to see why Marilyn Monroe made the Hollywood Roosevelt home for two years, and her 750 square-foot Cabana suite can be booked for as low as $1,179 in the low season.