Everyone knows about the Camino de Santiago, the Amalfi Coast, and the various routes through French wine country, but one of the best hikes in Europe is actually in one of its tiniest countries. Luxembourg’s Mullerthal region is nicknamed “Little Switzerland” for its craggy terrain, imposing rock formations, lush forests, and streams reminiscent of Switzerland’s landscape. It’s also home to the 70-mile Mullerthal Trail that offers some of the best hiking and cycling in Europe. Sure, Luxembourg might sound like a relatively out-of-the-way destination if you’re visiting from the US, but located between Belgium, France, and Germany, it’s actually incredibly accessible. Mullerthal’s relative obscurity also makes it a great summer hike for those wishing to truly connect with nature, away from the hordes of tourists that plague more popular European trails. Here’s everything you need to know about tackling Luxembourg’s most epic hike.

The Mullerthal Trail consists of three big loops, each with its own distinct personality and aesthetic. The first loop begins in Echternach, a storybook town on the banks of the Sûre River, right on the border of Germany. Echternach is the perfect base for any Mullerthal Trail trek, with a full day’s worth of highlights on its own. You can explore the seventh-century Abbey of Echternach, wander the old town square, stroll along the river, or even walk across the bridge into Echternacherbrück, Echternach’s German counterpart. There are also plenty of outdoor bars, restaurants, and cafes, so you can fuel up before hitting the trail. 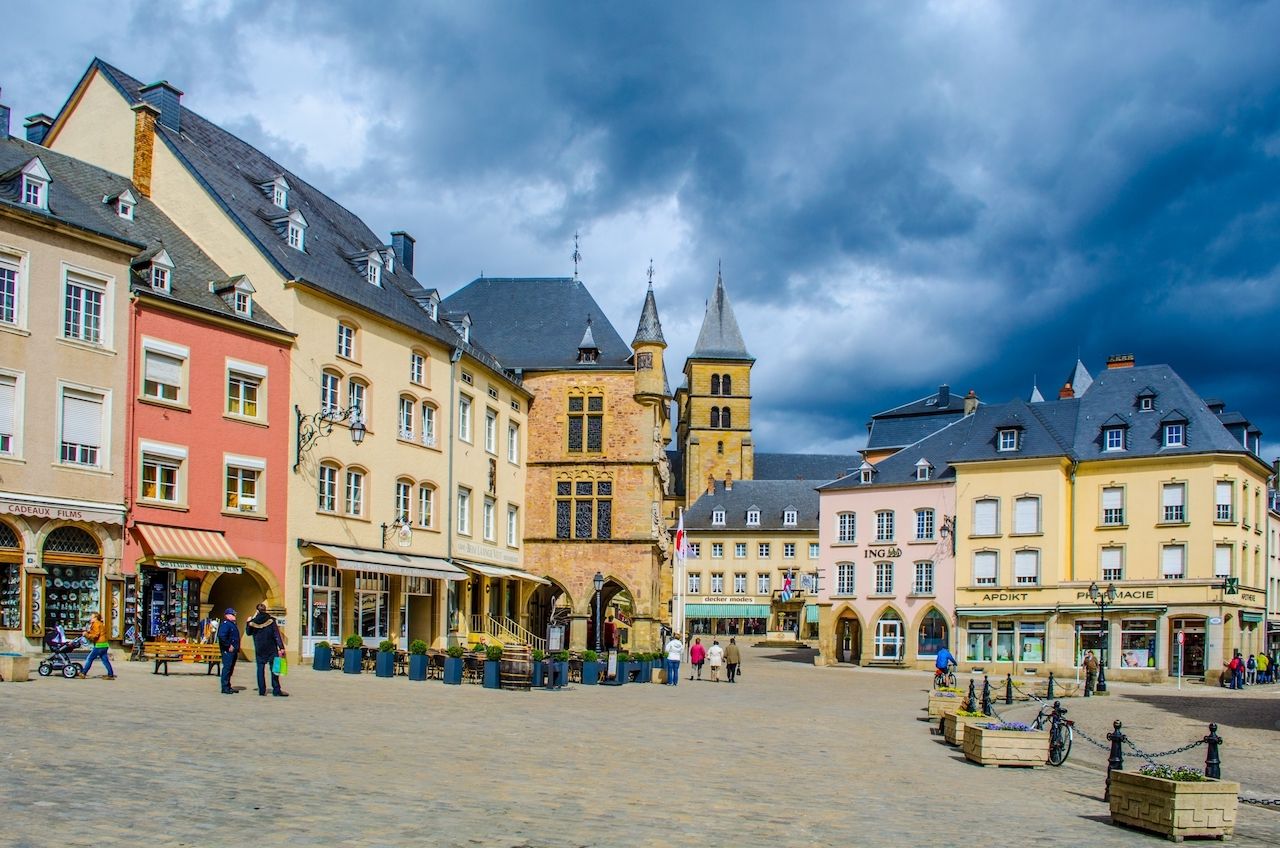 Leaving from Echternach, start walking west toward Rosport along the Sûre River. Trails lead you into the woods behind Echternach, and you will find yourself immersed in a green forest. If you’re hoping for photographs popping with a variety of colors, you’ll be out of luck, but that doesn’t mean you will be disappointed by the landscape. Between the thick foliage and leafy canopies, the topography is impressively green. It may sound a tad monochromatic, but the visual effect it produces is almost surreal. 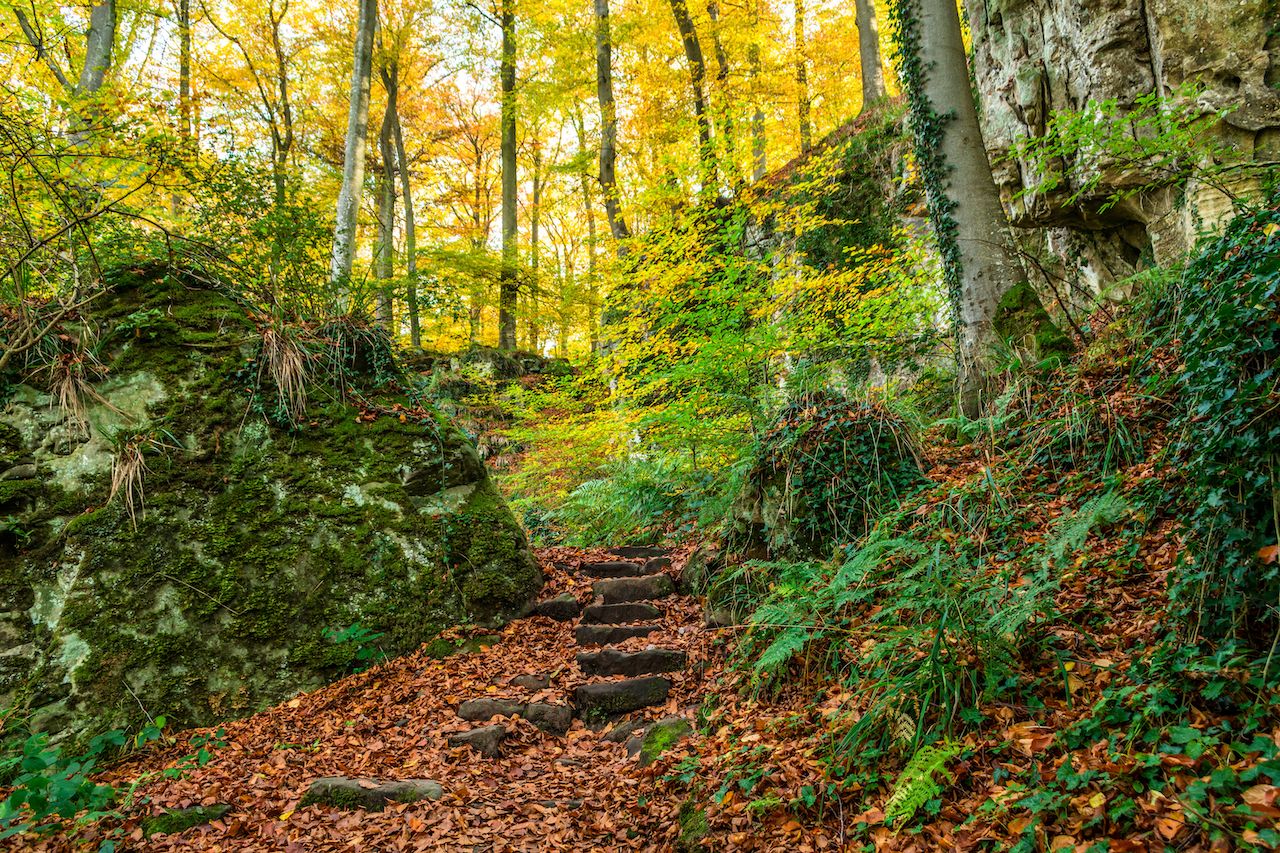 You will also see impressive rock formations in the woods, springing almost from nowhere between the trees, and lending the forest an ancient, prehistoric feeling. Some formations even bear the markings of those who lived there thousands of years ago, and even now many hikers use their caves for shelter.

The trail will bring you to Rosport and Steinheim, where you can stop for a short break before turning east past the Sûre Valley toward Moersdorf. Moersdorf, or nearby Born, will be the last place for you to rest before embarking on the last part of the trail back to Echternach, through the forest of Herborn. The entire trail is 23 miles long, but given the number of options for stopping and resting, you can take as long as you need to complete it. 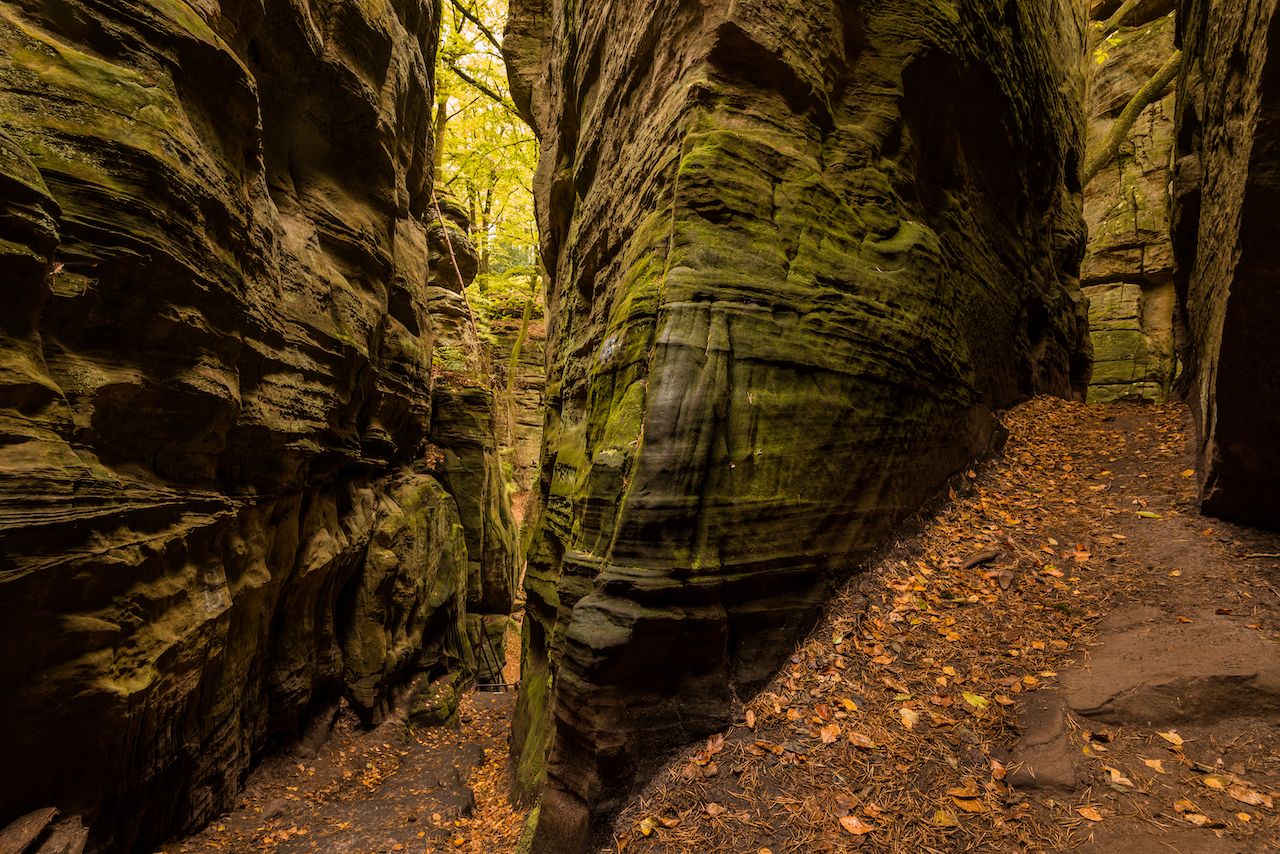 Loop Two of the trail can also begin in Echternach. Start at the bus station, and walk east for about an hour and a half to Berdorf. It’s a bit steep here, but you’ll eventually reach an outlook called Trooskneppchen, where you’ll get a great view of the small town and surrounding landscape. Perhaps the most memorable part of Loop Two — and indeed, of the Mullerthal Trail as a whole — is the Wolfsschlucht (wolf’s canyon), lined with massive moss-covered rock formations. 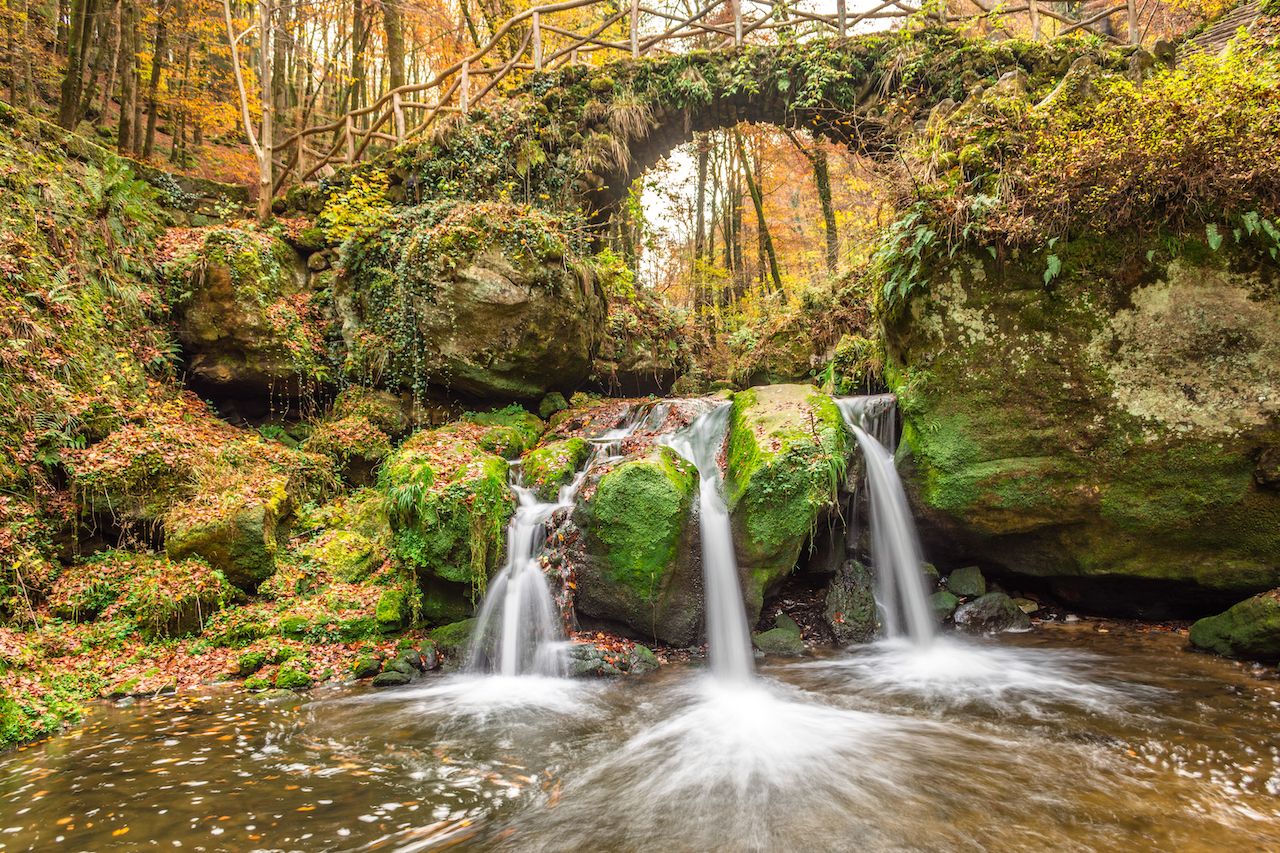 Pass Berdorf and continue through Schnellert Forest toward the village of Mullerthal. You’ll probably be a bit hungry, so make sure you stop at the local mill, which now serves as a restaurant called Brasserie Heringer Millen, and tourist information center. Once you’ve satisfied your hunger, you’re ready to see the first waterfall of your hike. This isn’t Iceland, so don’t expect anything too dramatic, but the Scheissendëmpel cascade, directly off the trail, is a refreshing sight in the green wilderness. 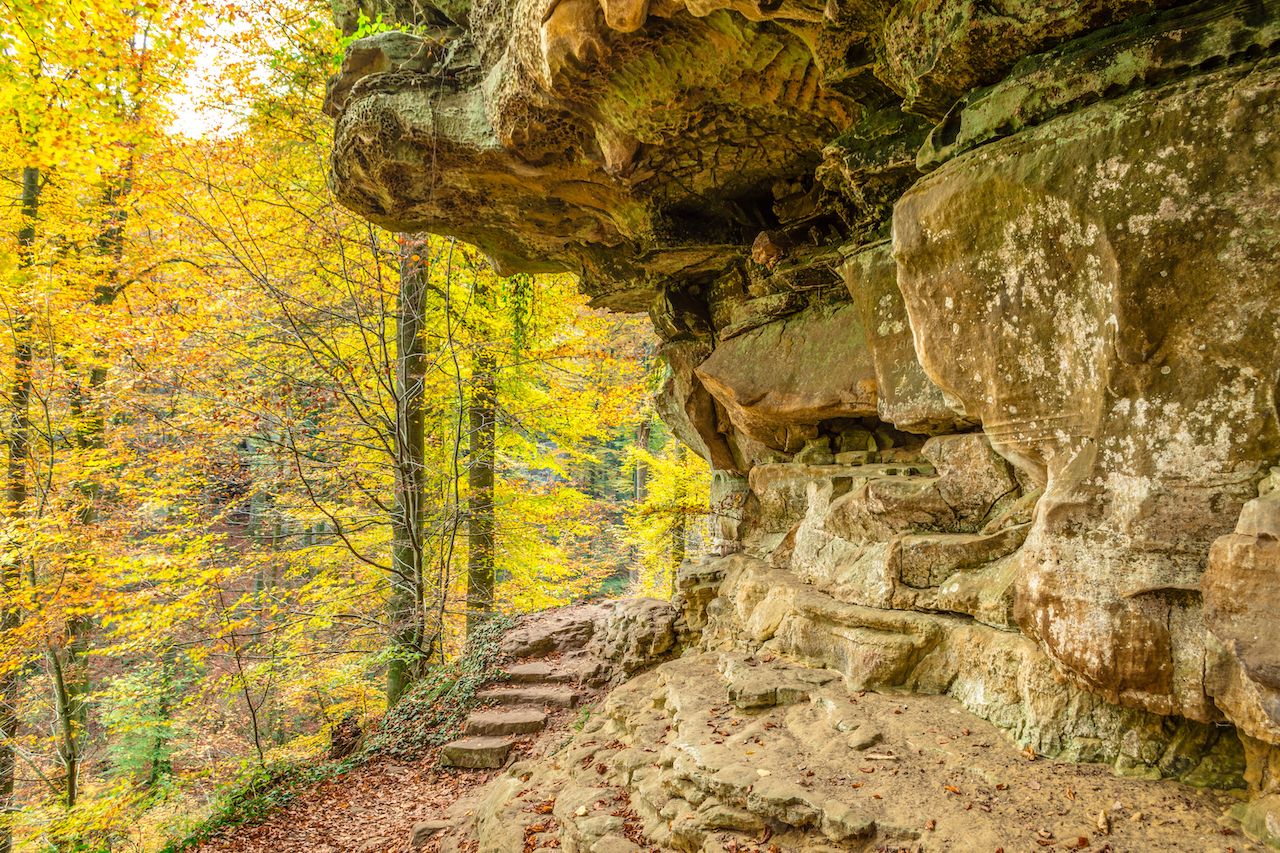 Your next rest stop will be in Consdorf, just 45 minutes from Mullerthal. This will be your last rest stop before you head back to Echternach, passing first a crevice called Kuelscheier. Note that the crevice is very dark and narrow, and if you don’t have a light, you might be better off walking around it. 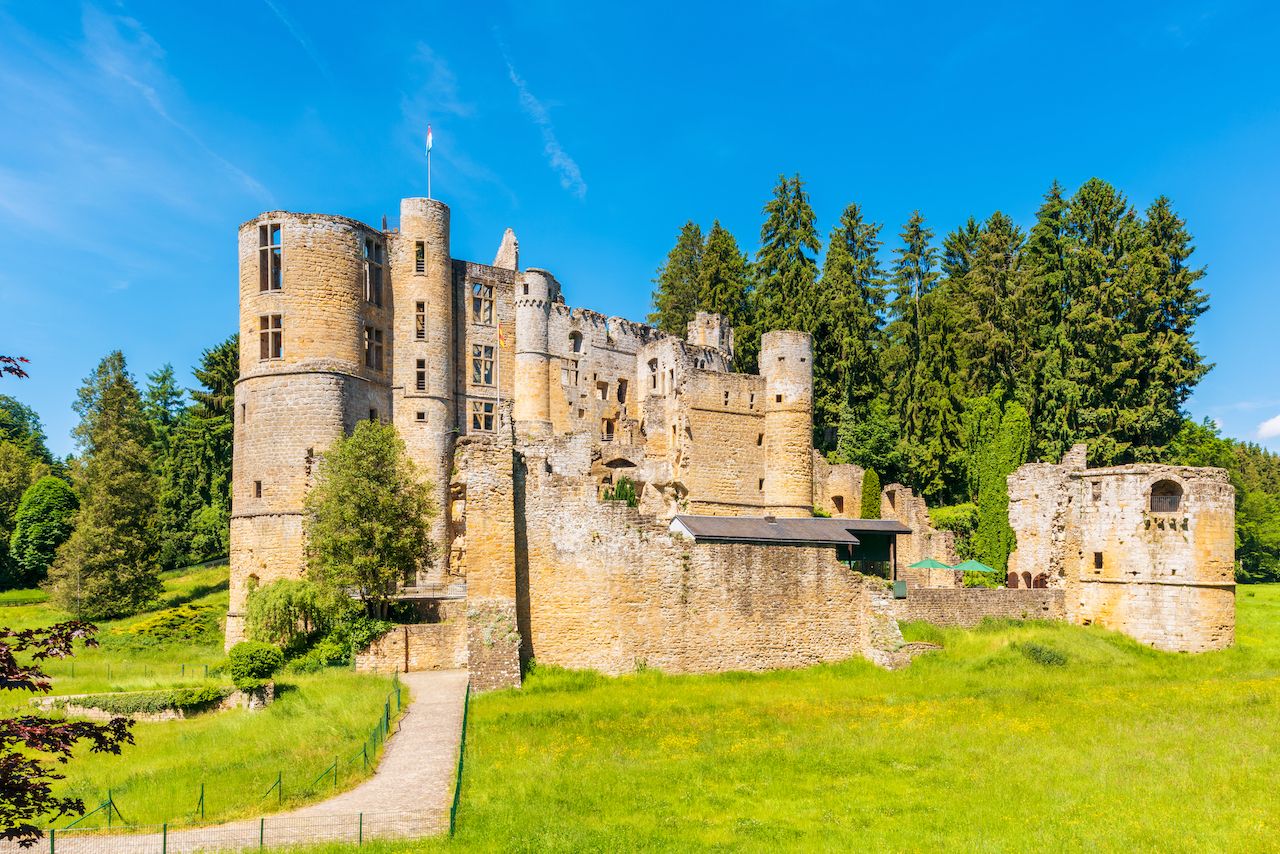 You can start Loop Three in a few different towns, but the most convenient might be the town of Mullerthal. From here, walk north to Beaufort along the Black Ernz river — a leg of the journey that should take around two hours. You will pass through the picturesque valley of Halerbaach and end up right at the doorstep of Beaufort Castle, where you can stop to explore the grounds and sample some black currant liqueur, which is still produced there.

After the castle you’ll reenter Halerbaach en route to Larochette, where you will be greeted by yet another castle. This 12th-century estate cuts an imposing figure over the small market town of Larochette, and if you don’t feel like continuing on the trail just yet, it’s the perfect place to spend the night. 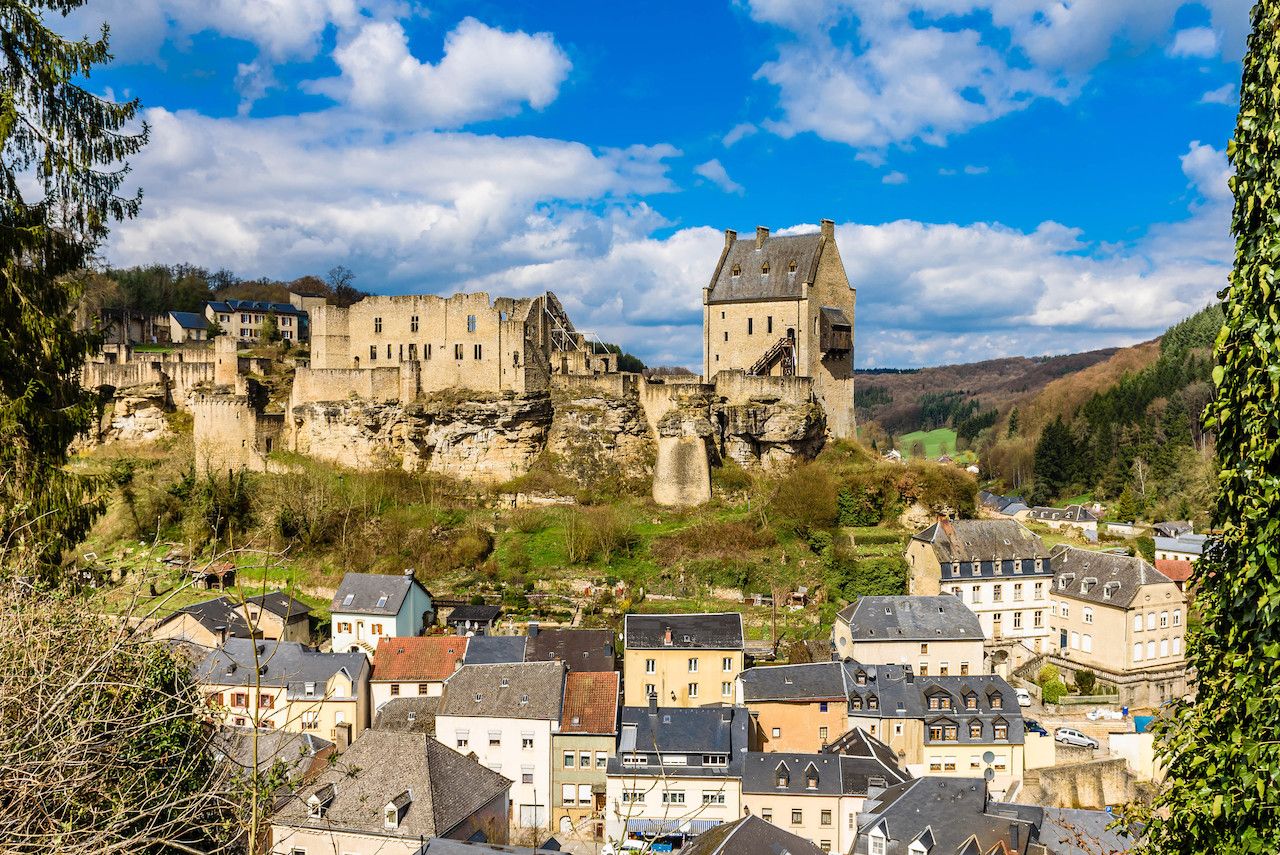 After a solid night’s rest in the shadow of the castle, walk along the White Ernz brook toward Blumenthal, atop a high plateau where you can enjoy more fantastic views. The route from Blumenthal back to Mullerthal takes you through a light beech forest, a refreshing pool of water called the Kallektuffquell, and the Scheissendëmpel cascade also visible on Loop Two. After passing the Scheissendëmpel, it’s just under one mile back to Mullerthal, where you started.

The best part about the Mullerthal Trail — regardless of which loop you decide to take — is that you can make your journey as long or short as you like. There are plenty of rest stops along the way, and they aren’t simply highway oases with gas stations and McDonald’s. Each little town on the trail is a destination in itself, where you can easily spend a full day wandering the medieval streets before setting off again for the Luxembourg wilderness.

Hiking5 Extraordinary Hiking Trails You Won’t Believe Are in the United States
Tagged
Backpacking Hiking National Parks Trip Planning
What did you think of this story?
Meh
Good
Awesome