Sabine Langer understands upheaval, sudden moves, and the chaos of adjusting to a new home on the fly. She’s been through it many times before: At 21, she immigrated from Switzerland to Southern California to accommodate her former husband’s job. In a string of hectic years following that initial move, she and her family pingponged between Memphis and Dallas, following her husband for work. She learned not to unpack all the moving boxes, knowing the latest move was only temporary.

Finally in 2012, Langer and her children settled permanently in Memphis (after living there for two years previously). She’s lived there for eight years now, and in 2012 she opened Global Café, a restaurant where all the food is prepared by refugees. Her own experience as an immigrant inspired her to find a way to help others with less resources and financial security find fulfilling work in their new country — work that pays well, and helps them integrate into their communities so that they don’t feel like outsiders. For Langer, the arduous process behind settling in her new home still haunts her, and she hopes to ease that burden for newcomers to the United States, like she once was.

“They call it ‘adjusting your status’ when you’re a new immigrant,” Langer says of the process behind obtaining a green card. “It was a very difficult and lengthy process. I had money in the bank and I kind of spoke the language, so I could kind of read and figure my way through. But I was thinking about those [people] that just got here, and they don’t speak the language and how much harder it is on them.”

In each new city she arrived in, Langer occupied herself with volunteer work at organizations like the Refugee Empowerment Program. She quickly found many of the immigrants and refugees she encountered in her work were doctors or lawyers whose degrees and qualifications were not transferable to the US. Forced to take menial jobs to support their families, Langer witnessed a system that ultimately abandoned refugees without much of a support system.

“You don’t get a heads up about where you’re going to end up, so you don’t have time to learn the language,” she says. “So they take the first job they’re offered, usually in a warehouse, and they work tons of hours. They break their backs. They don’t have time to go to language classes, [yet] people see them as refusing to integrate.”

In Memphis, Langer started thinking about how she could help break this cycle and give recent refugees the opportunity for upward mobility in their communities. She ultimately decided that, despite the fact that she had no restaurant industry experience and “can’t boil an egg,” she should open a restaurant staffed entirely by refugees. Langer made connections with prospective employees through her children’s international school, and today Maria Bracho from Venezuela, and Somaya Mohamed, from Sudan, serve as Global Café’s chefs (the restaurant’s general manager, Juan, is from Mexico). The restaurant itself is located in a 2-million-square-foot building that also houses apartments, medical offices, and a high school.

“I do feel that the community is educating itself by being willing to support a restaurant like Global Café and by giving us the opportunity to teach them our cultures,” Bracho wrote to me in an email. “I can say that I created a bond with many clientele.”

Both Bracho and Mohamed told me that they had trouble adjusting to life in the US before they were hired at Global Café. Bracho worked several jobs and found the language barrier especially challenging. Both women agree that their work at the cafe has greatly improved their quality of life, allowing them more financial independence and free time to spend with their families. Though the dining room has been closed during the pandemic, the chefs are still making good money on a newly instituted delivery service, which the cafe was able to set up because the building reallocated its valet budget to delivery drivers.

Langer adds that two chefs who have since left the cafe were able to buy their homes, as was her general manager Juan. Bracho bought her own car. These material possessions mean greater security for their families, and eases the burden of settling comfortably in a totally foreign land. 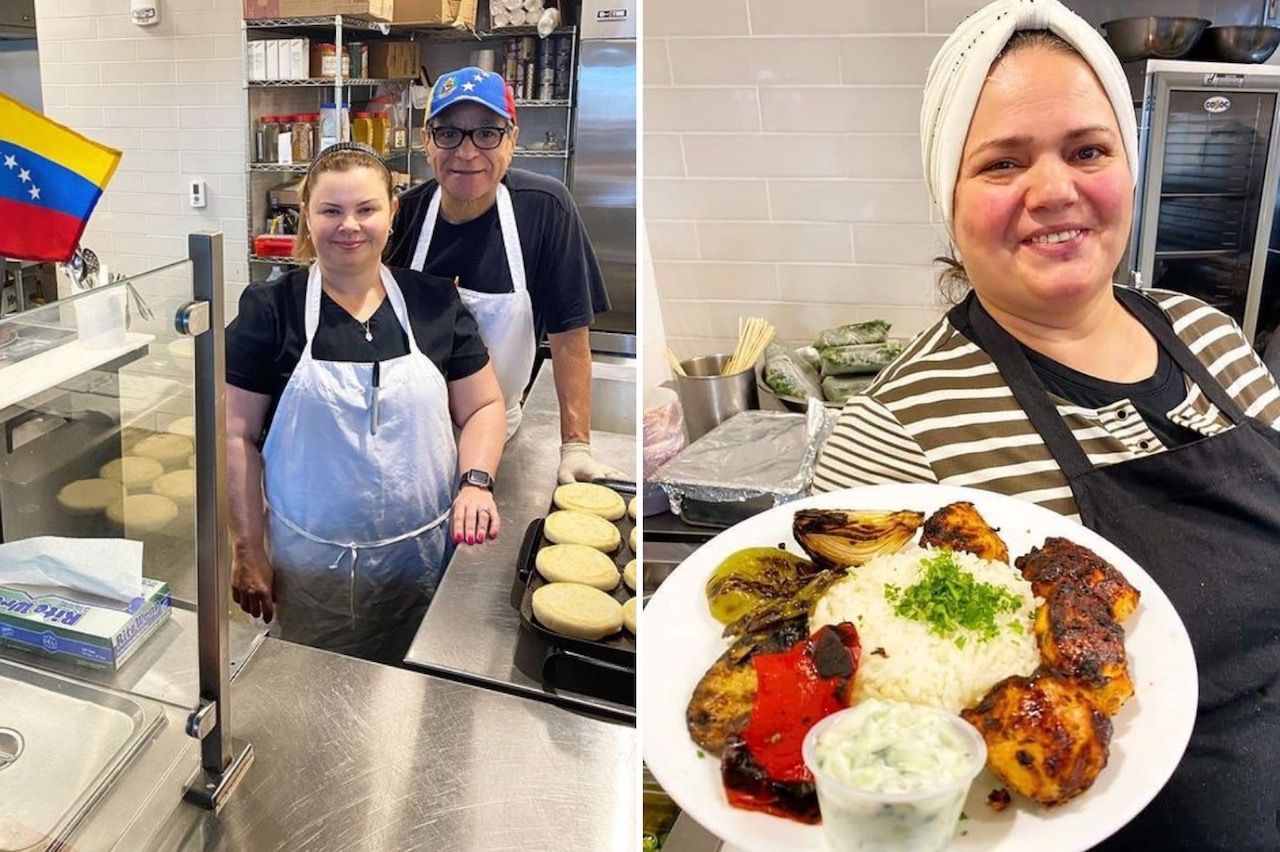 Langer opened the cafe in order to empower refugees financially to help build stable, thriving lives in the US. But she says that Global Café has another purpose, one that centers on exposing the Memphis community not just to diverse cuisines but also to the experiences and life stories of refugees.

“A big aspect of [Global Café] is to educate people about what an immigrant or a refugee is,” she says, “because the rhetoric became, after the last election, ‘They’re here to steal American jobs, they’re just here to bum off the system.’ It’s very important for people to understand that we are hard working, and the best way to for people to open their eyes is to see it in action.”

There’s a communal table in the middle of the Global Café dining room, and guests are encouraged to chat with the chefs and get to know them (if they aren’t otherwise occupied, of course). Langer suspects that 20 years ago, when most of the food in Memphis revolved around barbecue, Global Café wouldn’t have been successful. But before the pandemic, the dining room was filled with regulars. And that support hasn’t waned even after a year of lockdown — one woman stops by every day just to hand Juan, the general manager, a $20 bill.

Part of the reason that Global Café has such ardent fans is that Langer and the chefs were determined to run a kitchen that people visited not out of a sense of obligation but because the food is simply delicious.

“I didn’t want to be that charity that people came to and patted me on the head and said, ‘Okay I’m going to bite the bullet and eat there because I want to support refugees,’” she says. “I wanted it to be really good, so that people would come back.”

The effort to create a restaurant that builds fellowship between members of the Memphis community, provides financial advantages to refugees, and serves fantastic food, paid off. The staff really are making those connections Langer longed the restaurant would facilitate: Mohemad told me she regularly encounters customers who are curious about Sudanese culture and ask her to teach them phrases like “thank you” and “hello” in her language — conversations which she says have helped improve her own grasp on English, too. Sharing Sudanese food and fellowship with her American customers brings her joy.

“[The chefs] always say that the first ingredient of any dish is love,” says Langer. “They feel like sharing food is sharing their love.”

A previous version of this story mistakenly listed Langer’s home country as Sweden instead of Switzerland. We apologize for the error.

17 Signs You Grew Up Celebrating the Holidays in Memphis

18 Fears Only People From Memphis Understand

12 Dining Adventures You Have To Go on in Memphis

19 Signs You Were Born and Raised in Memphis

19 Signs You Learned To Drink in Memphis

How To Piss Off Someone From Memphis