The best way to describe what it’s like to visit Convergence Station, Meow Wolf’s latest installation in Denver, is that the experience is an intricate choose-your-own-adventure journey through an immersive fantasy world. For fans of Meow Wolf, Convergence Station expands on the art and storytelling that made the Santa Fe-based group famous. For those unfamiliar with the concept, it may take awhile to understand what, exactly, Convergence Station is.

Regardless of which camp you fall into, one thing is for sure: You’ve probably seen nothing else like it.

Convergence Station is Meow Wolf’s third permanent installation. The inside is like a movie set, but one where you’re the main character and you can explore the world of Convergence Station however you see fit. At the heart, the concept is that you’re in a location where multiple universes and timelines have mashed together, and Convergence Station is the portal where you can jump off to see who (and in many cases what) ended up at stopping point.

Joanna Garner, the senior narrative creative director, and James Longmire, the story development director, told me that more than a dozen local and national writers spent years working on the narrative. It’s easy to get lost in each artist’s interpretation, but, as Garner and Longmire explained, it all connects to a larger theme with subtle ties between the various Meow Wolf locations through characters and conflicts.

“There’s no wrong path because you are your own guide,” Longmire says. “But as you go through, just under the surface there lies a cosmic mystery of four forgotten women and the gateway to the infinite.” 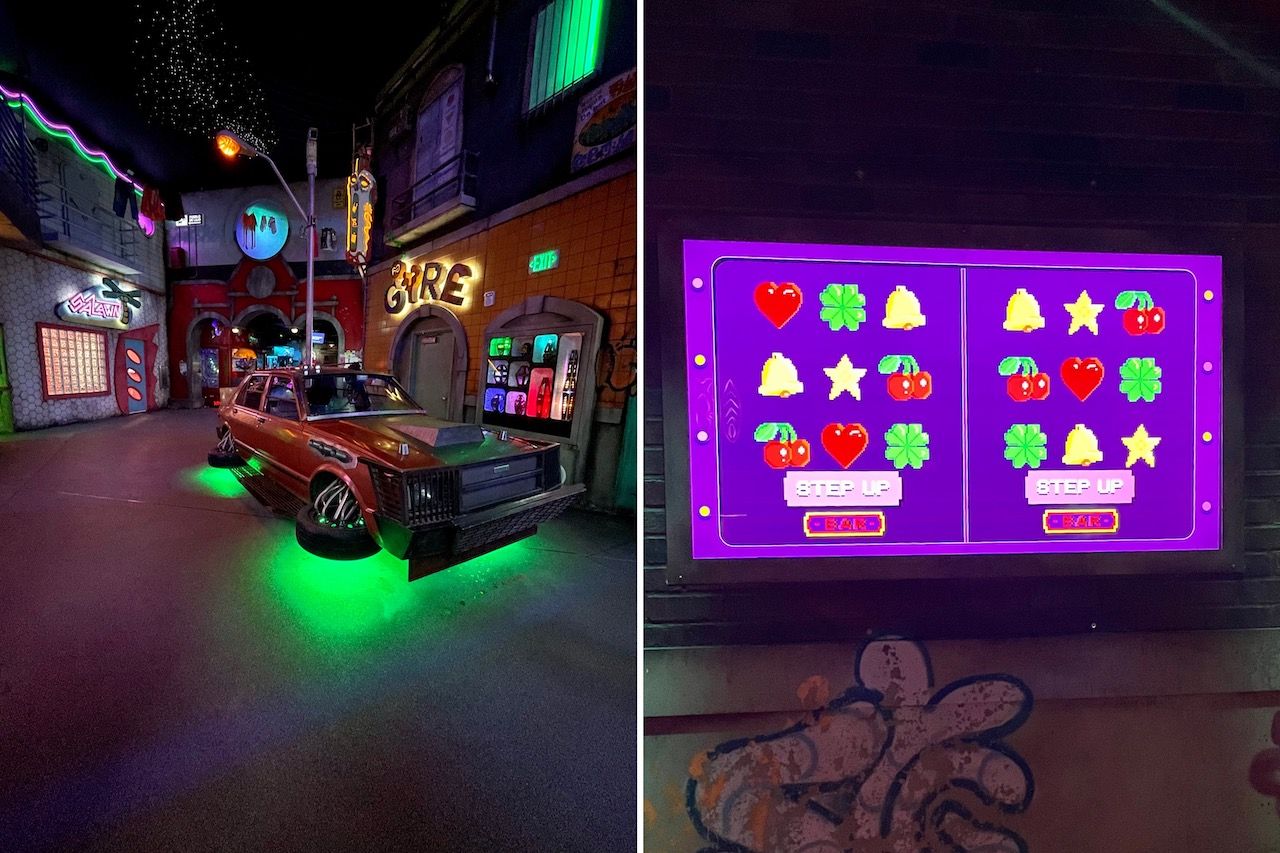 Accessibility was a central theme in building out the space. One room shows the perspective of someone who is in a wheelchair, and an old bus with the nearby Sun Valley neighborhood listed as its destination has posters and plaques that reference Denver’s Gang of 19 that helped ignite the disability rights movement in the late 1970s. A plaque in the lobby states that “Convergence Station is on the ancestral homelands of the Arapaho, Cheyenne, and Ute people. We pay respect to the Indigenous people: their ancestors, their thriving communities of today, and their knowledge keeps of tomorrow.” 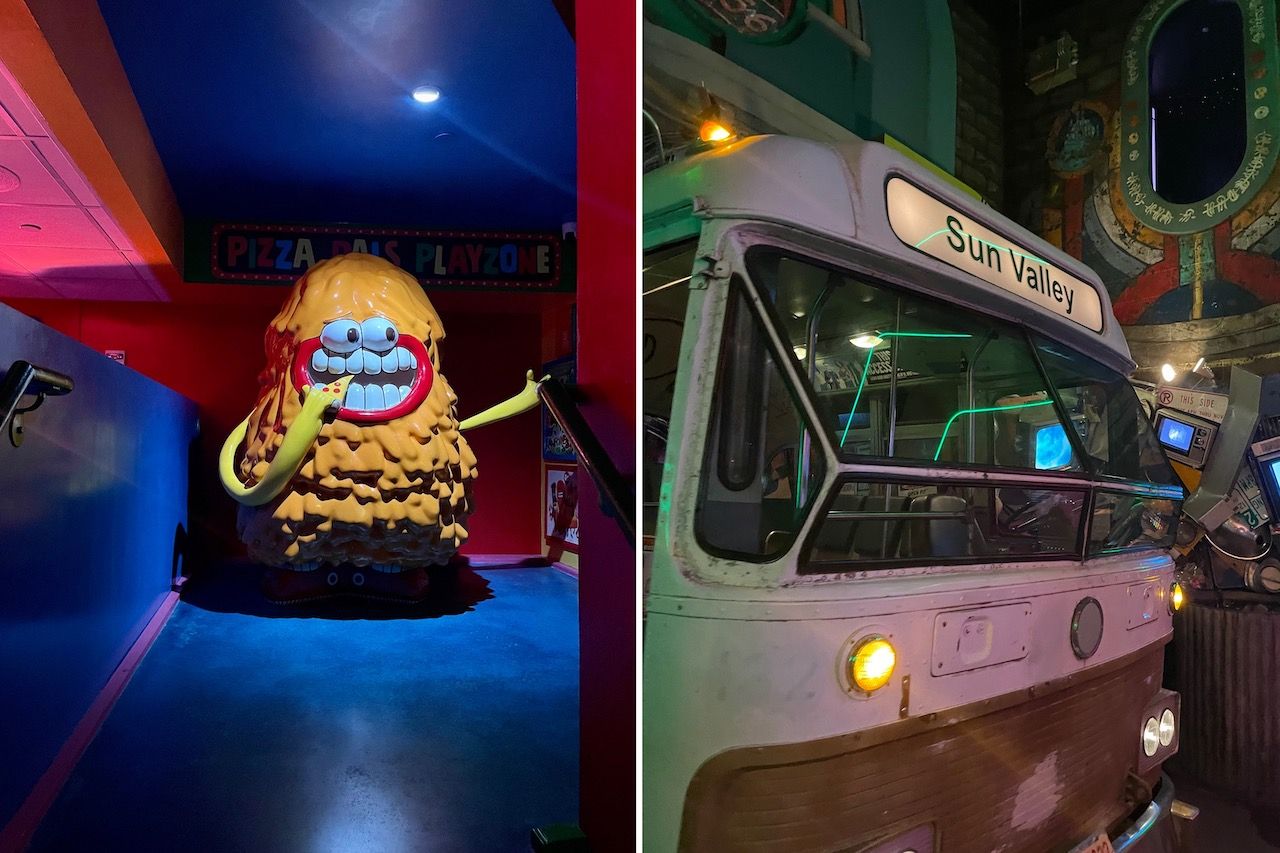 The 90,000-square-feet location is the group’s biggest yet. The four floors have a 488-person capacity and are decked out with hundreds of installations, a retail and event space, and a cafe.

The theme is obvious from the start. On the outside of the building, a painting designed to show the hecticness of people coming together. I’m instantly reminded of trying to figure out the subway lines in my first years living in New York City, or an aerial view of the highway system in Dallas. 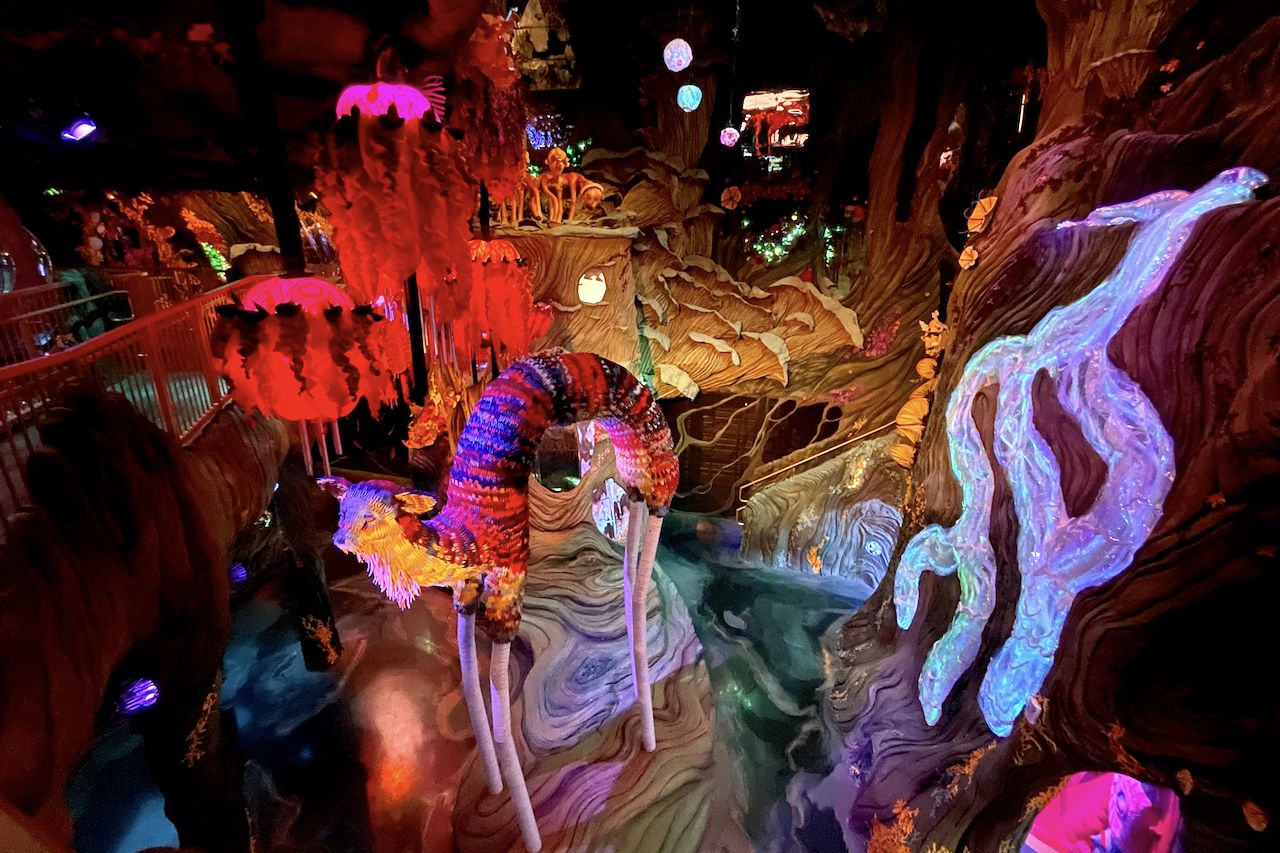 Inside the lobby, the sound of an old train sign ticker fills the air as if you’re in an empty Grand Central Station when the departure times were listed on split-flap boards before everything went digital. The lobby is also where you’ll start and end this choose-your-own-adventure story (along with where you’ll find the cafe and gift shop). The imagery along the ceiling was inspired by Hubble Telescope images and spray painted using about 130 cans.

The whole thing has been years in the making, and it’s clear there’s plenty of interest. Meow Wolf sold 35,000 tickets in the first hour of opening them up. Prime-time tickets can be hard to come by today, though weekday tickets are more available. 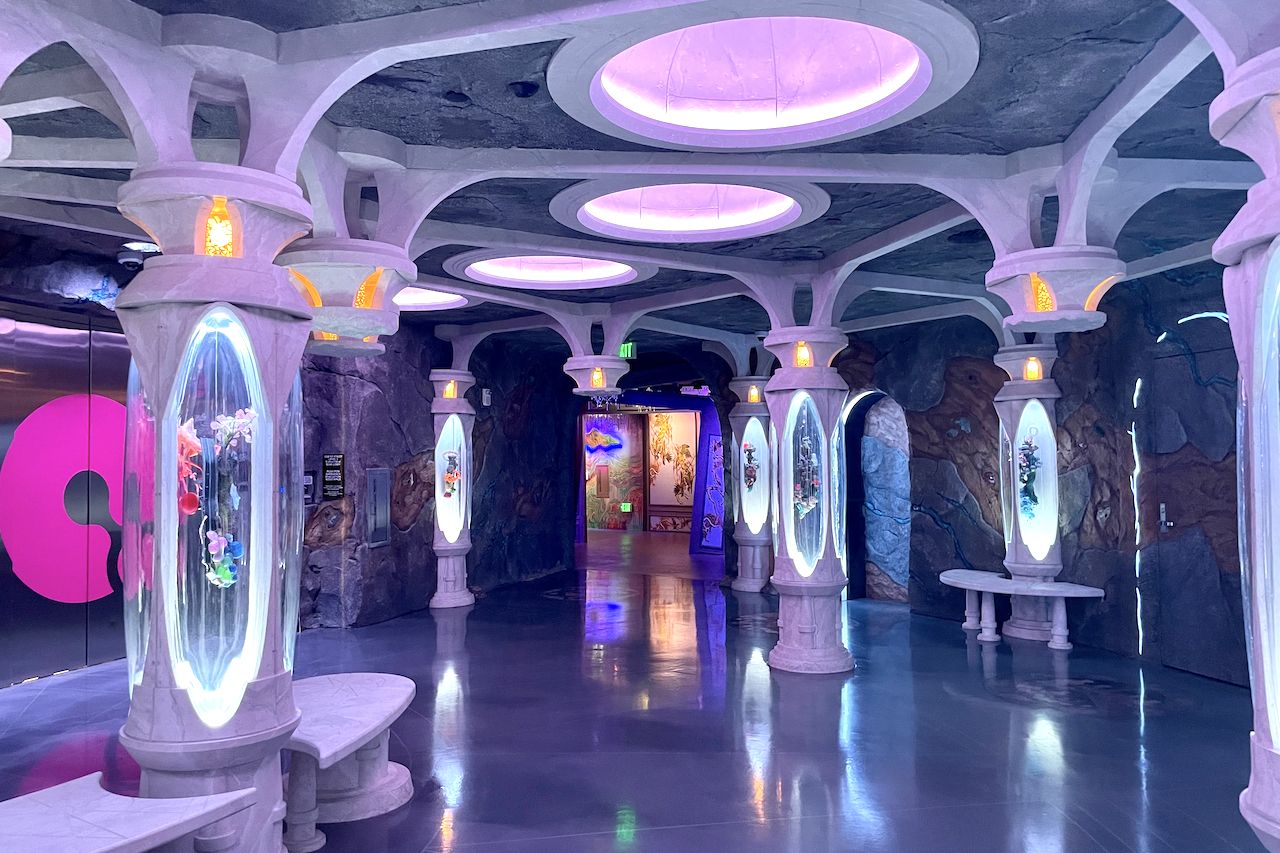 In the Convergence Station world, every character’s memories jumbled together when the timelines and worlds collided. These memories are what guide the experience. At the heart of this world are Oss stones that store memories. Citizens mixed up memories as they came together in Convergence Station, the story goes, and they use the convergence exchange to share and transfer crystals that preserve them.

You can interact with these characters as you activate features built into each exhibit using personal radio-frequency identification cards (RFIDs) called a QPass. The lighting may change when certain RFIDs are activated in a specific sequence or at the same time, for example, or a “memory” of a character in the world may play. Your QPass remembers which memories you’ve interacted with, and unlocking certain sets of memories reveals new parts of the story that people can take a (admittedly very deep) dive into. Or not — you can just as much enjoy seeing the exhibits as one-off rooms. The Access To Memory (ATM) stations serve as a dashboard of the inventory of memories you’ve collected. Visitors keep them and can jump back into the same spot they previously saw on multiple trips. 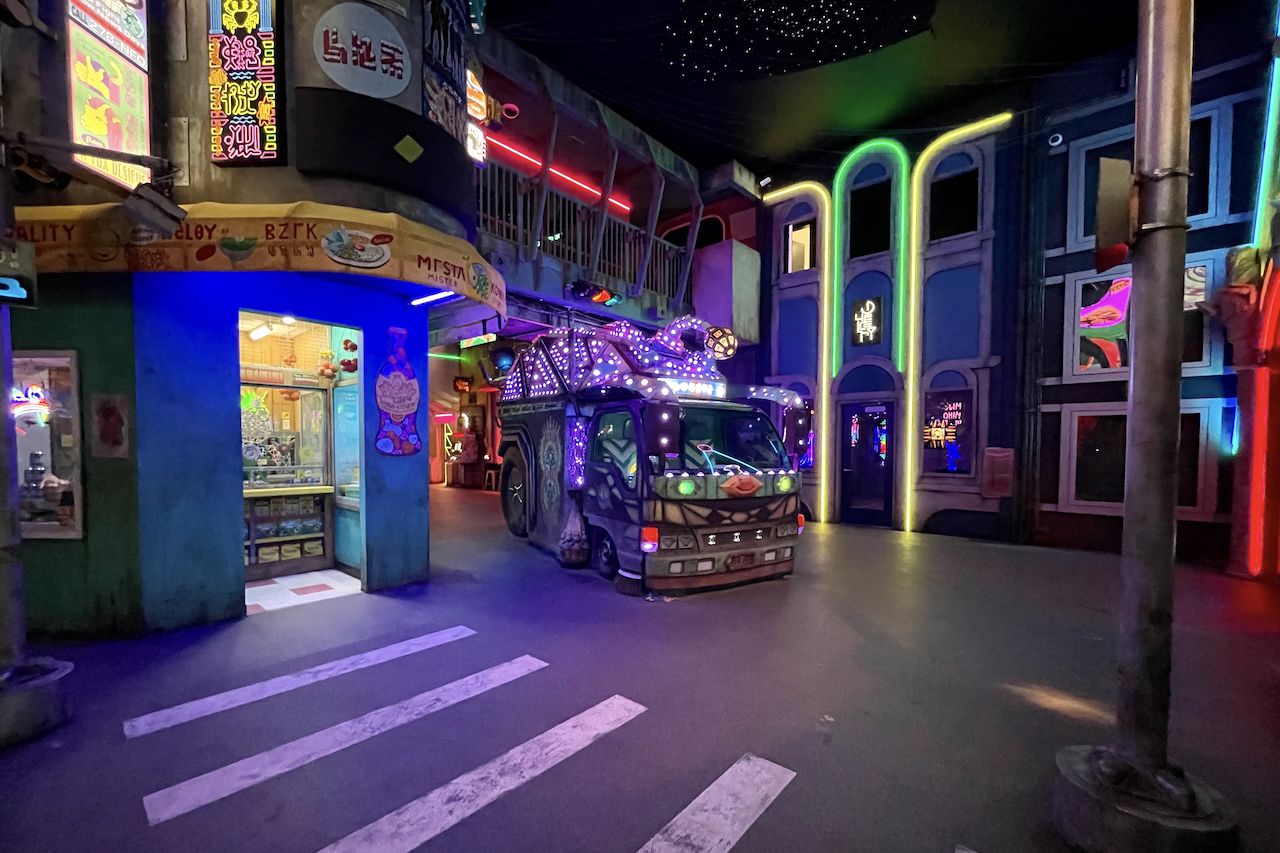 In one room, the artist drew from experiences with a family member who had dementia. The room itself had artistic touches that were reminiscent of a brain, and home videos play on screens implanted into the walls. It’s a blend of the theme of memories and intergalactic convergence mixed with the artist’s personal touch — a common theme throughout. In another hallway, a Colombian artist created a piece filled with colors that call back to the country’s naturally colorful river Caño Cristales. One room was a fever dream of a pizza place that went a little too far.

It can get dark in a Stranger Things-esque way that plays off of historical events from the 1980s. For example, the Rats Nest, which imagines an alternate parallel timeline where the Soviet Union won the Miracle on Ice and sent America into a downward spiral. Some in this timeline are forced underground like the Ninja Turtles and they gene splice with rats. True to the interactivity throughout, there’s a Rock ‘Em Sock ‘Em robots game people can play with giant rats instead of robots. 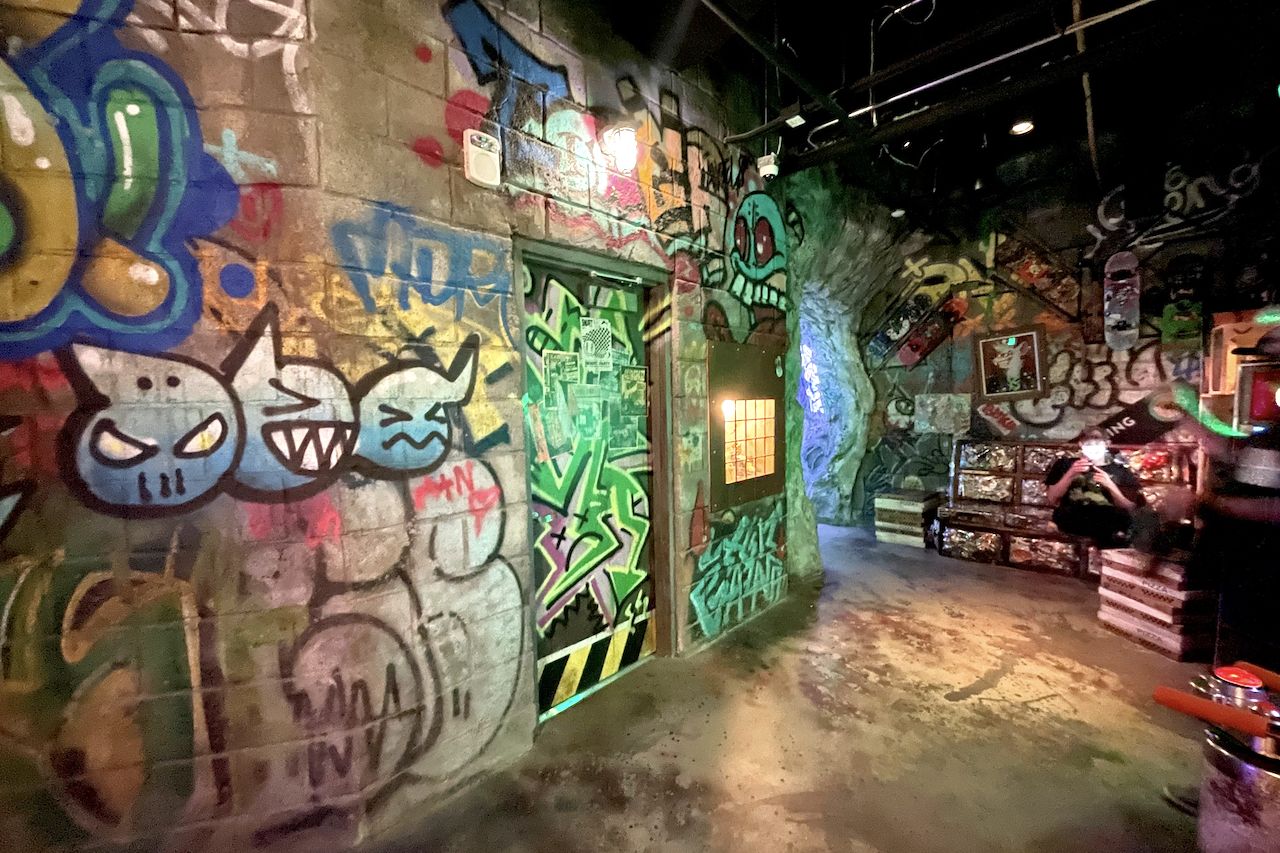 One personal favorite is called Gremlin Symphony, which is from the perspective of an engineer who escaped into the multiverse. To cure his loneliness, he turned instruments into sentient beings. Insead of words, they talk through music, and the piano, drums, and other instruments built into the wall “talk” through the music they play autonomously.

The lights, sounds, and colors can be a lot. For that, there are decompression rooms available for anyone feeling overwhelmed. 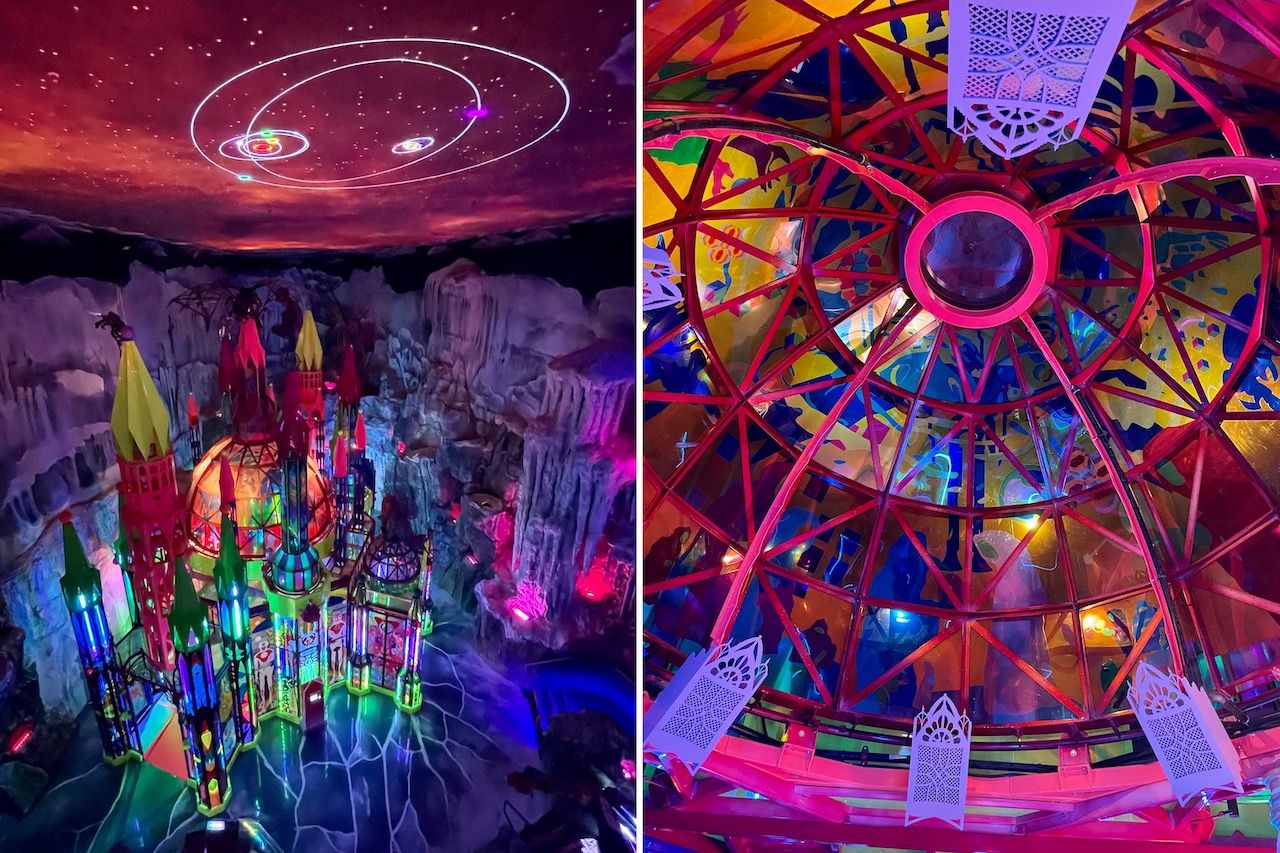 While walking through the various rooms, my guide had a repeating line that seemed to come up often: “We’ve found this is a very popular selfie spot.” Sometimes that selfie spot took the form of a digital installation of a wall covered in a spinning black and white pattern, other times it was a maze of a colorful room filled with mirrors. It seems that the place was just as designed for interaction with the artists and story as it was for interacting with the pieces through Instagram-friendly photos.