Montreal, Canada, has its MURAL Festival and colorful, street-art filled Boulevard Saint Laurent, while Amsterdam has its many gorgeously painted walls. In Denver, there’s CRUSH, one of the city’s largest week-long public art events where hundreds of artists join together to put a fresh coat of street art on the walls of the RiNo Art District. This year, despite everything 2020 has thrown at the city, CRUSH went on to keep the neighborhood the most colorful in Denver.

CRUSH has run every September since its founding in 2010 by Denver artist Robin Munro. It typically includes a festival where artists are invited to work simultaneously on the streets and alleys in Denver’s trendy RiNo neighborhood. Art classes and lectures usually fill the space in between for the many spectators who come to see the artists work in real time. It’s one of the most public-facing ways that the RiNo Art District lives up to its community mantra of “Where Art is Made.” 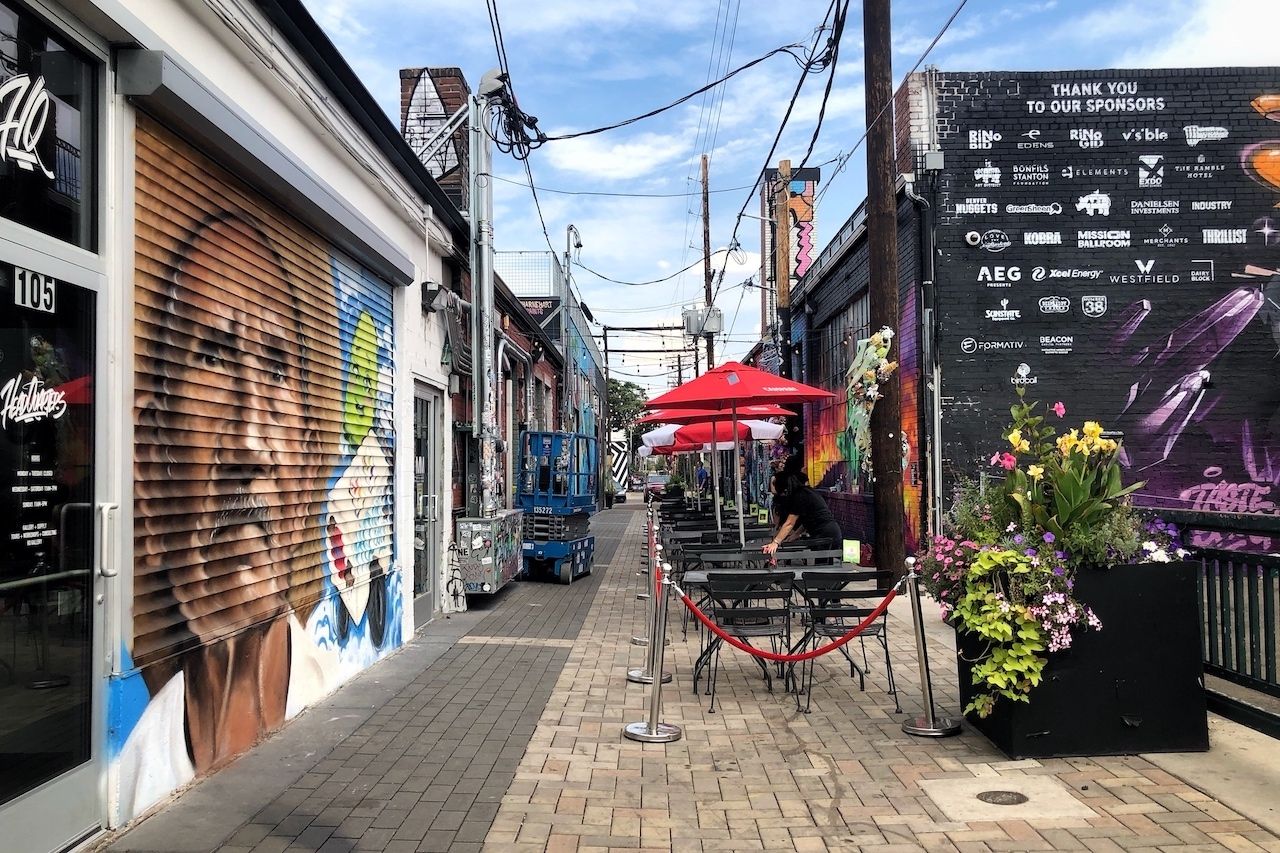 The event has helped a proliferation of art. It’s not uncommon to be walking the streets and alleys of Denver and see huge murals. Then there are the pieces from past years spotted from parking lots that are partially covered with trash. It’s a little spark of beauty in a place that can otherwise be filled with the normal grime and rough edges of the city. 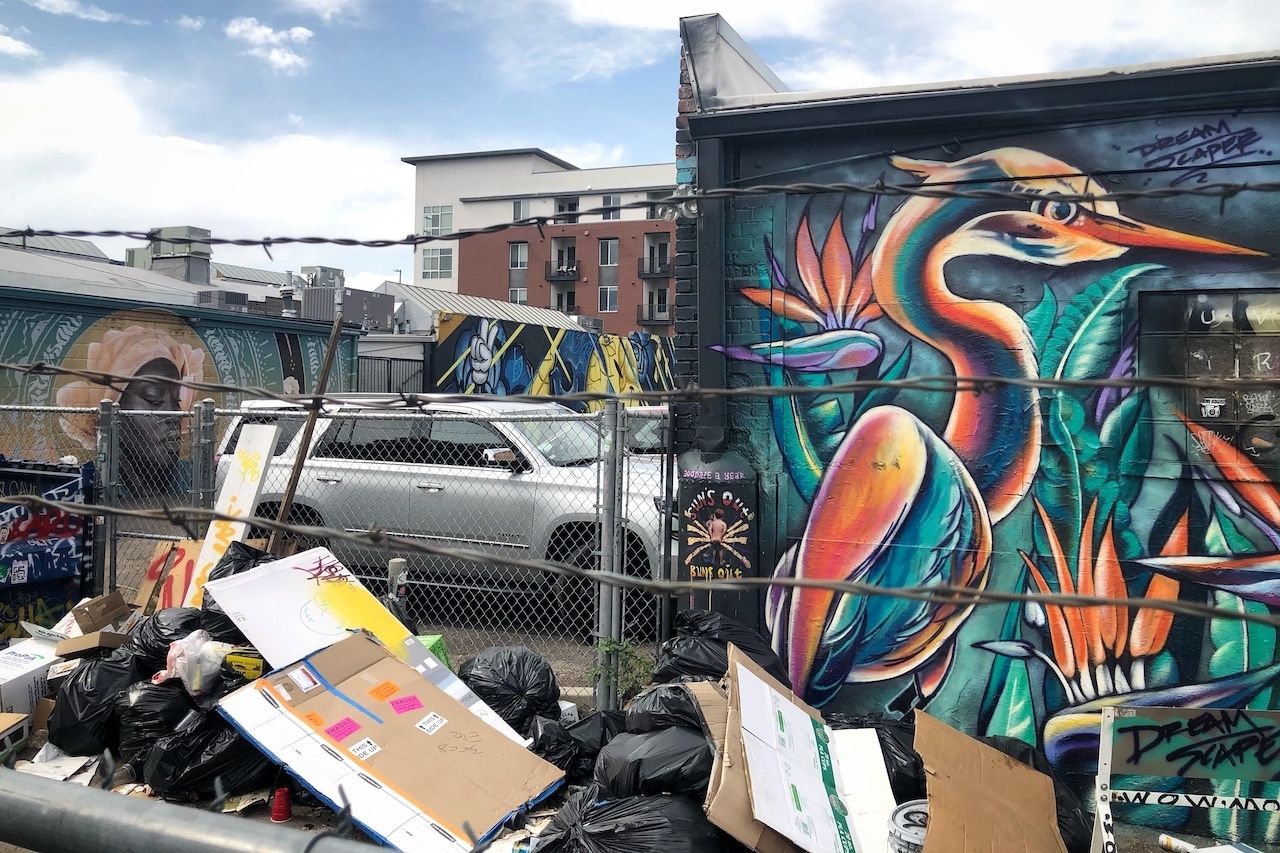 This year, of course, was different. There were still talks and events — including a talk of legal complications and a panel on street art versus graffiti — but some of the most popular alleys were closed to the public to allow for the artists to keep socially distanced. All of the indoor ticketed events were scuttled, and the pop-up outdoor bar served only single-use canned drinks. 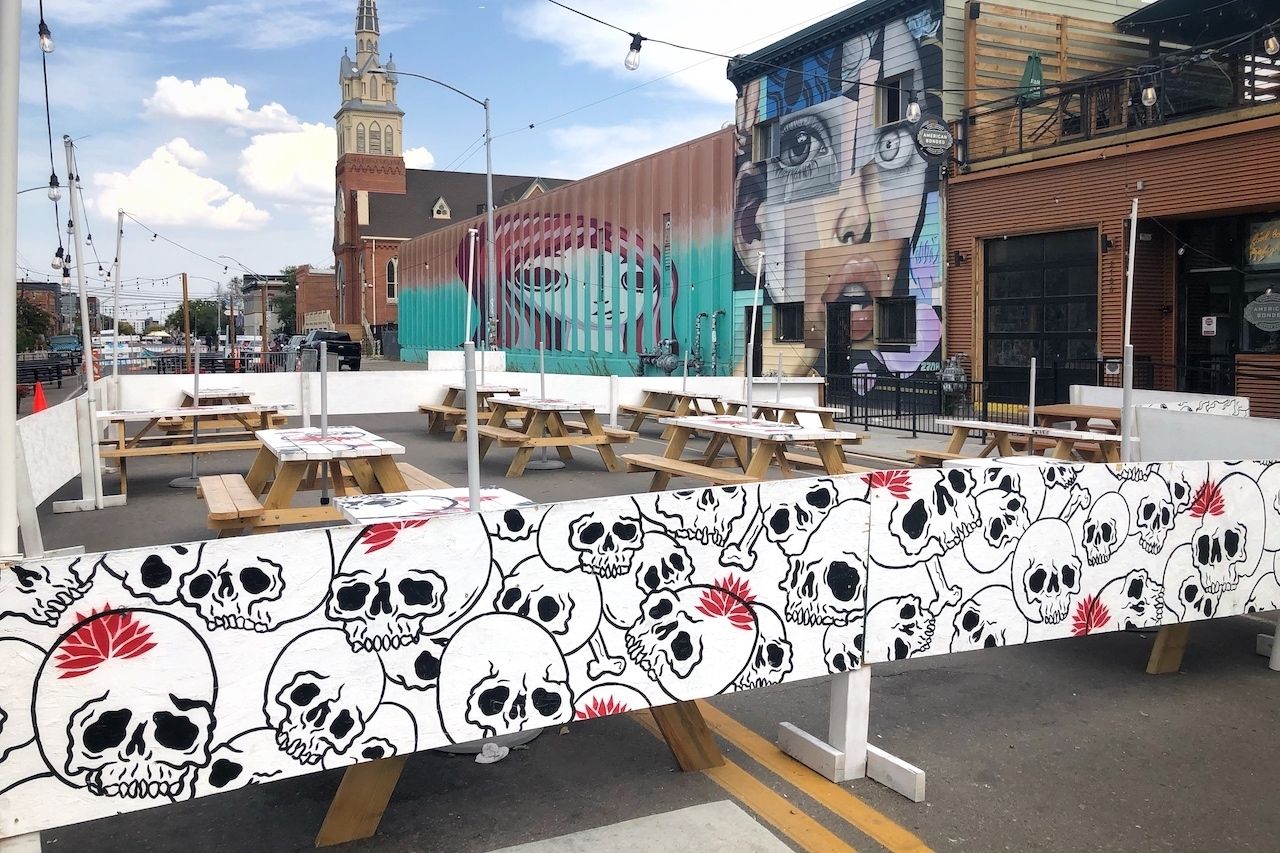 The inherent nature of street art requiring the outdoors allowed the art community to do its work, however. Denver closed certain streets in the designated area early in the pandemic to allow restaurants and bars to expand their outdoor seating, which made this year’s CRUSH even more walkable than usual. More than 100 local, national, and international artists were allocated sanctioned off walls, paid for their work, and given supplies this year. On side streets, others painted unofficial murals and tags — including a portrait of Ruth Bader Ginsburg by New York City artists Menace and Resa. 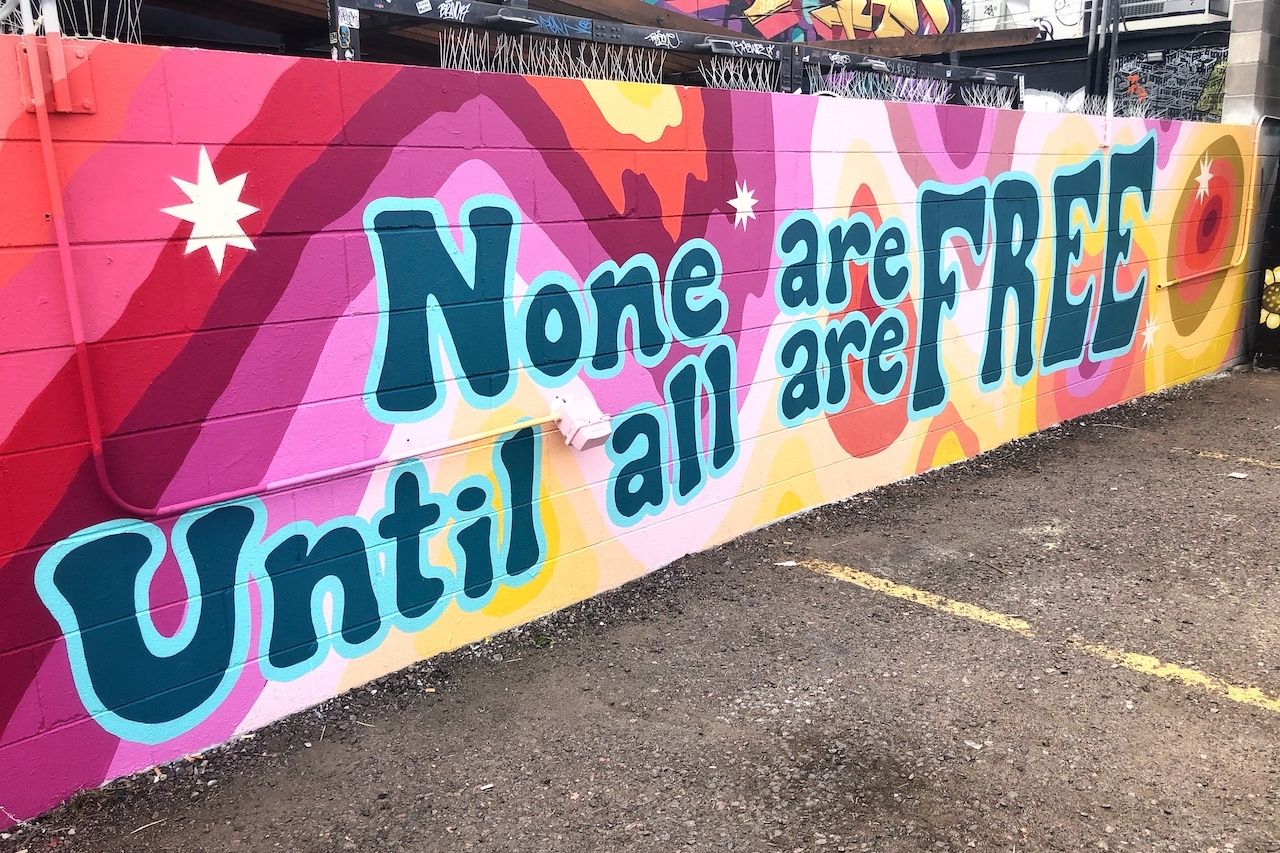 CRUSH gives artists a platform and a chance to involve the community, like the “None are free until all are free” piece done by artist Lindee Zimmer with the help of local kids. It also gives public space to important social messages. Last year, an artist who goes by Jolt used his space to call out how money, developers, and corporate-backed events like CRUSH are exacerbating the issue of gentrification in RiNo. In the open nature of the event, he was invited back again this year. His artist page for the event noted that Bud Light Seltzer sponsored him. 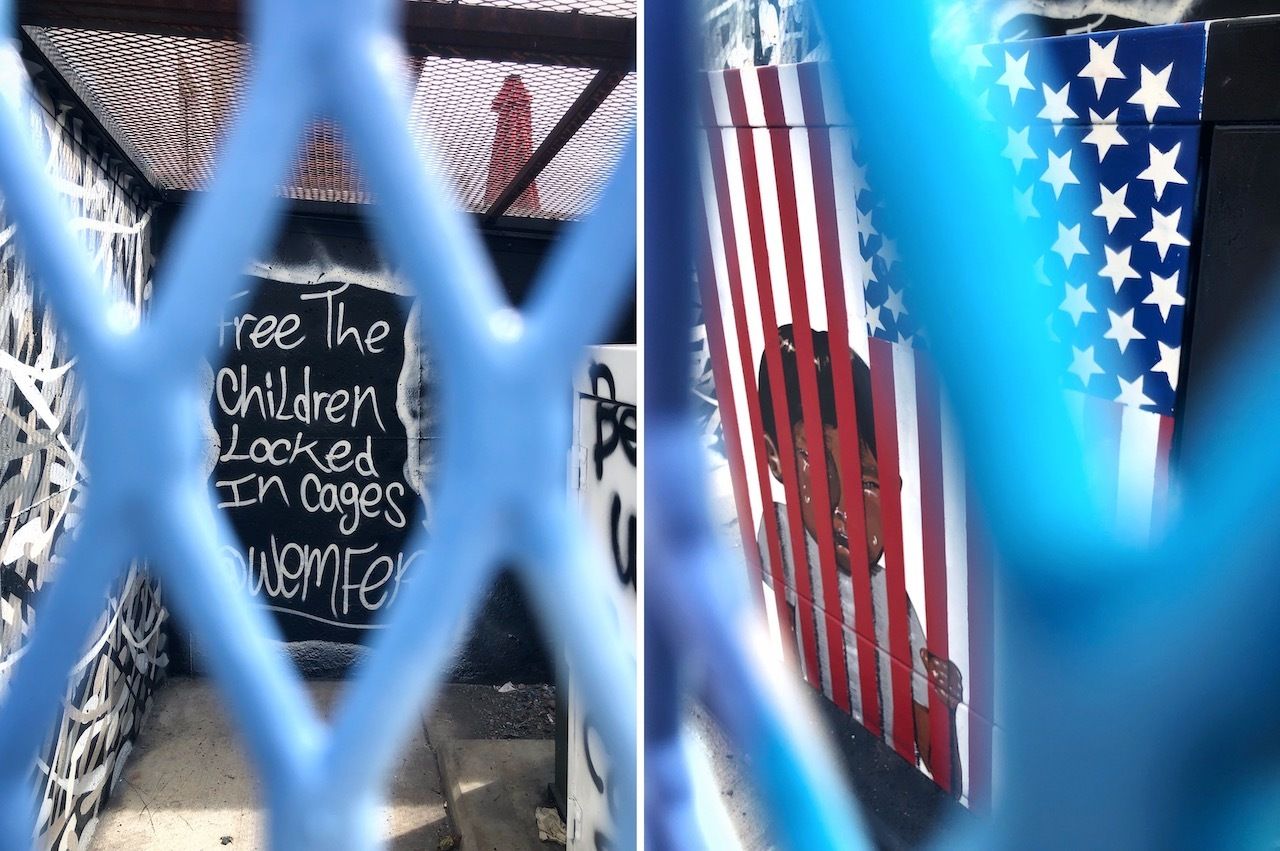 Powerful and current messages again resonated this year from both the designated artists and those working on their own. Nazario Sandoval and Raquel created a piece on and around a fenced-in power box of a child locked behind the bars of the United States flag with the message, “Free the children locked in cages.” Another piece read “RIP George Floyd” over a past piece done for the Denver clothing store Be A Good Person. 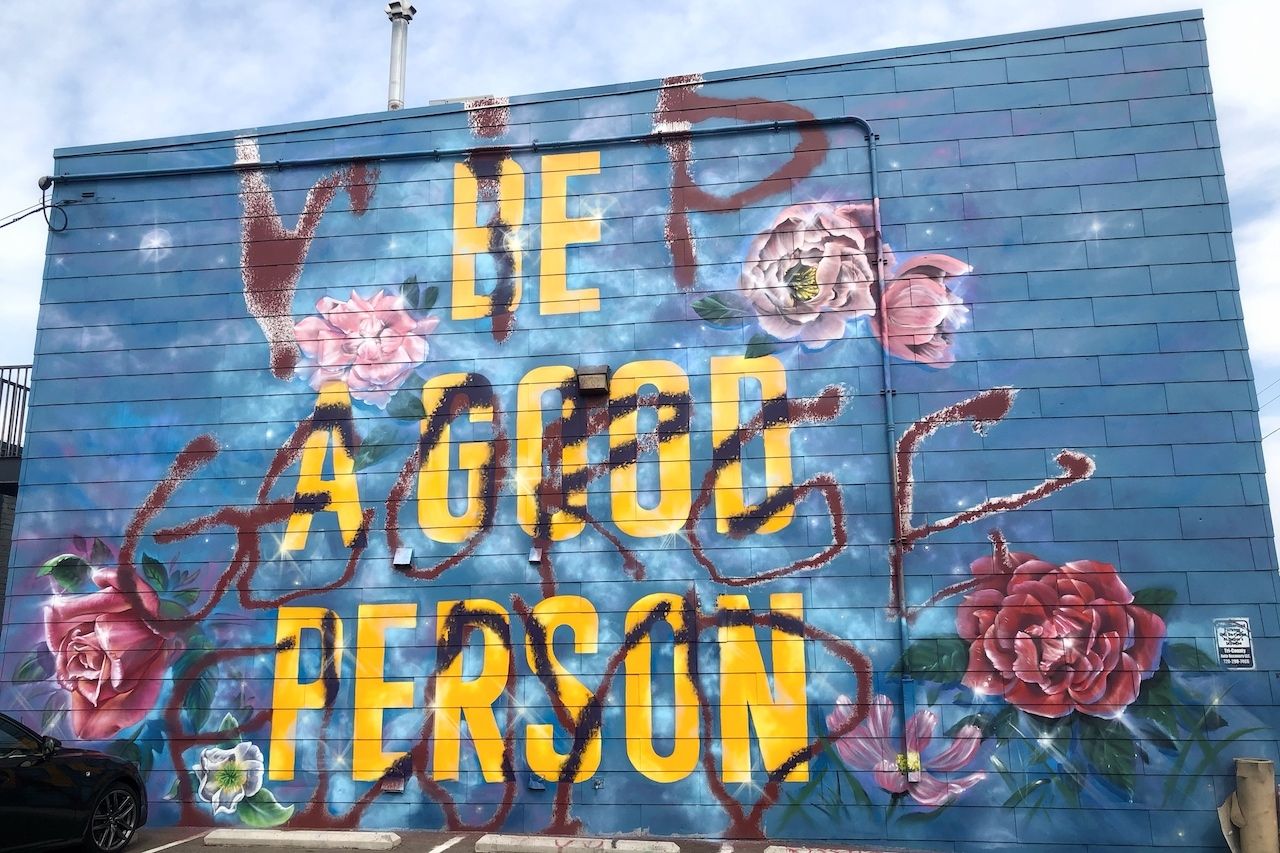 This year, the Black Love Mural Festival helped provide more space and money to BIPOC artists during CRUSH. Increased diversity and inclusion was a focus in the artist selection as well, according to Denverite. 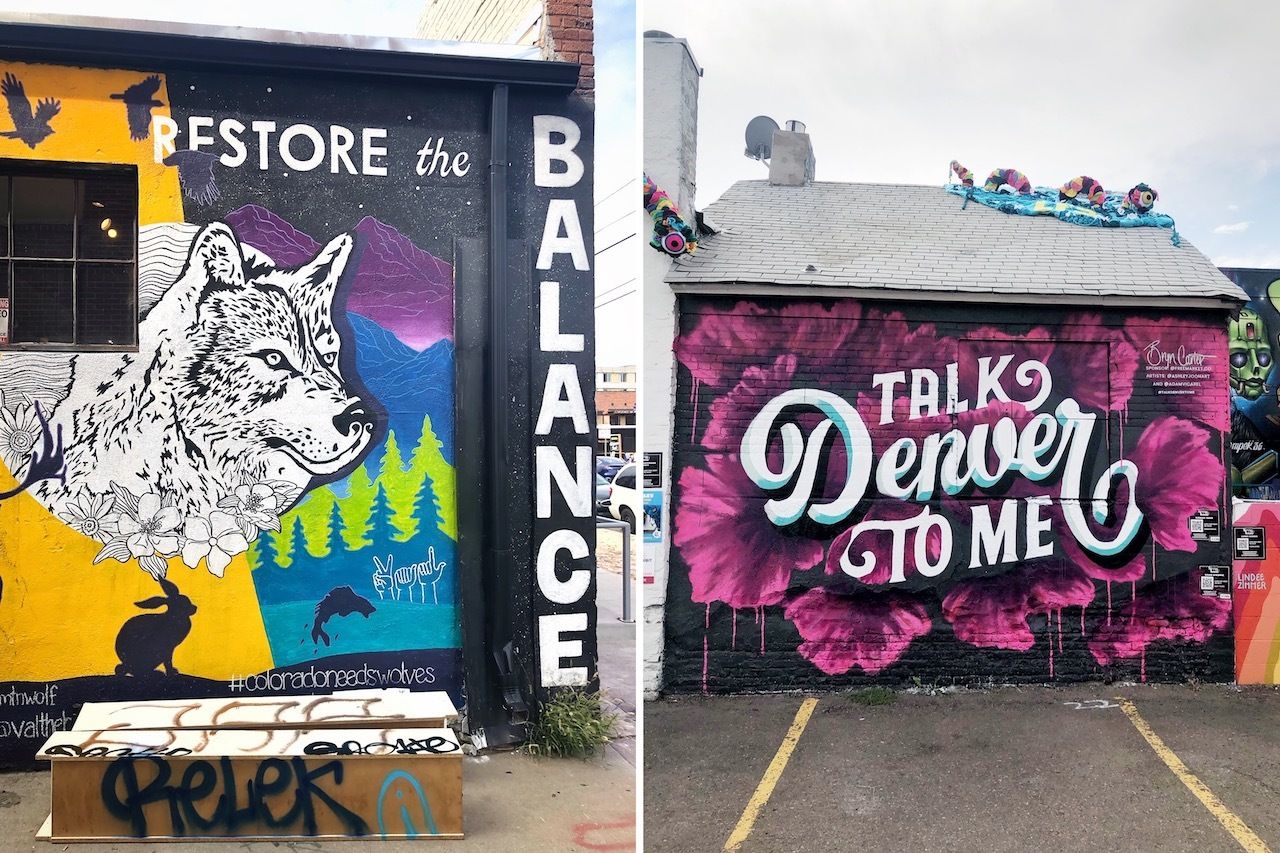 Though each year of the festival is like a rebirth that changes the face of the neighborhood, not every surface is repainted. Murals from past years, like one advocating for the reintroduction of wolves to Colorado by Valerie Rose, joined the ranks of newer works like the “Talk Denver to Me” piece by Ashley Joon. 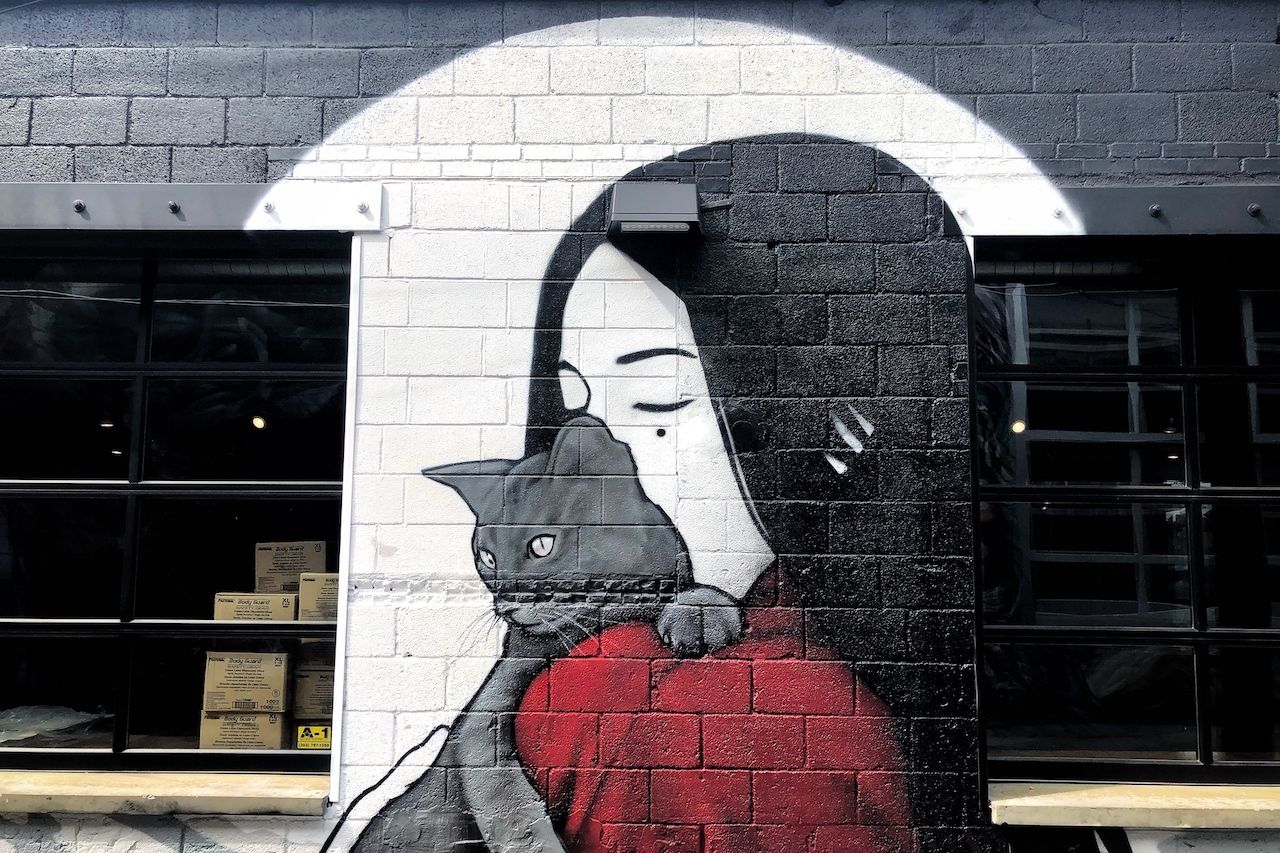 While many works used vibrant colors, others set a different tone, like a series of cats done by Casey Kawaguchi. 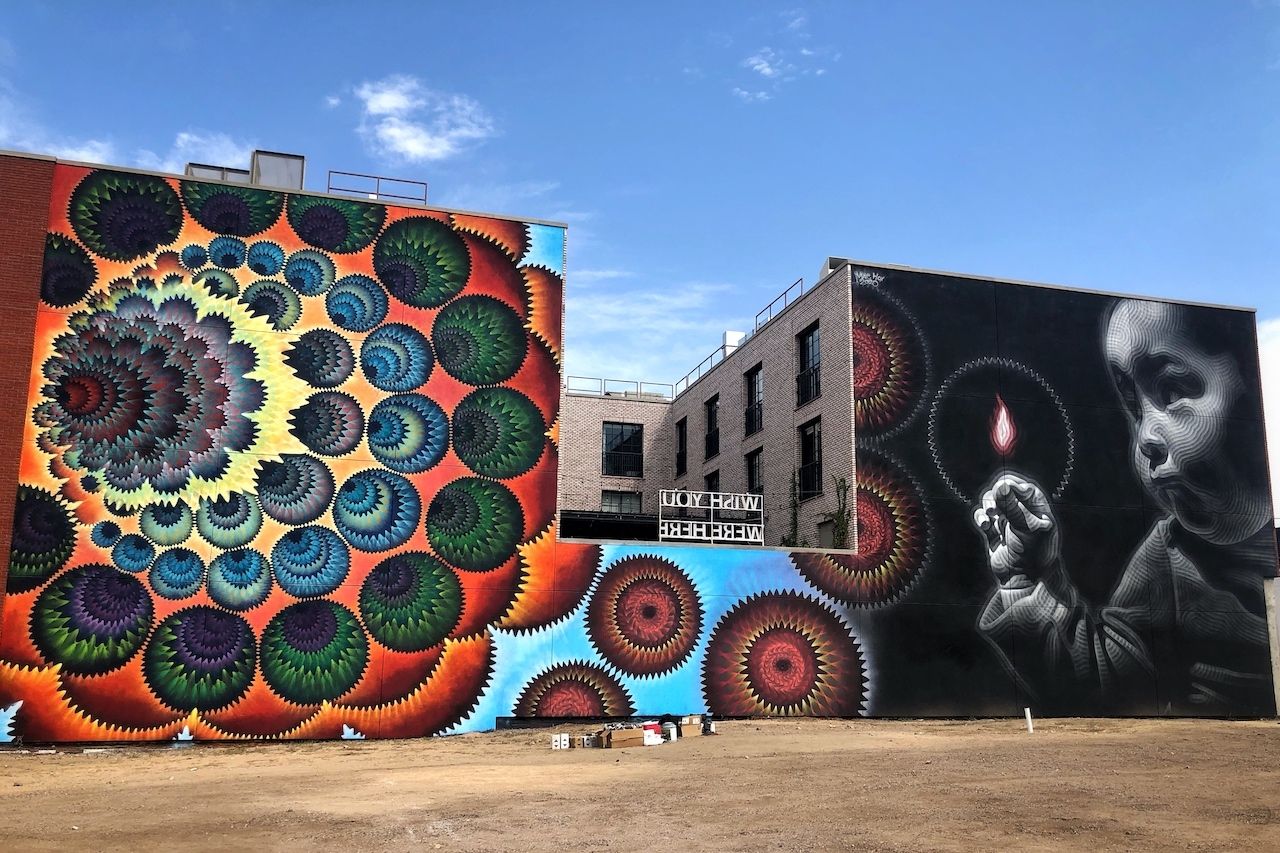 Marquee pieces spanned multiple buildings, like the work of Douglas Hoekzema. Other art turned walls into massive celebrations of beauty, like a flower wall from artists Jason Graves and Remington Robinson. 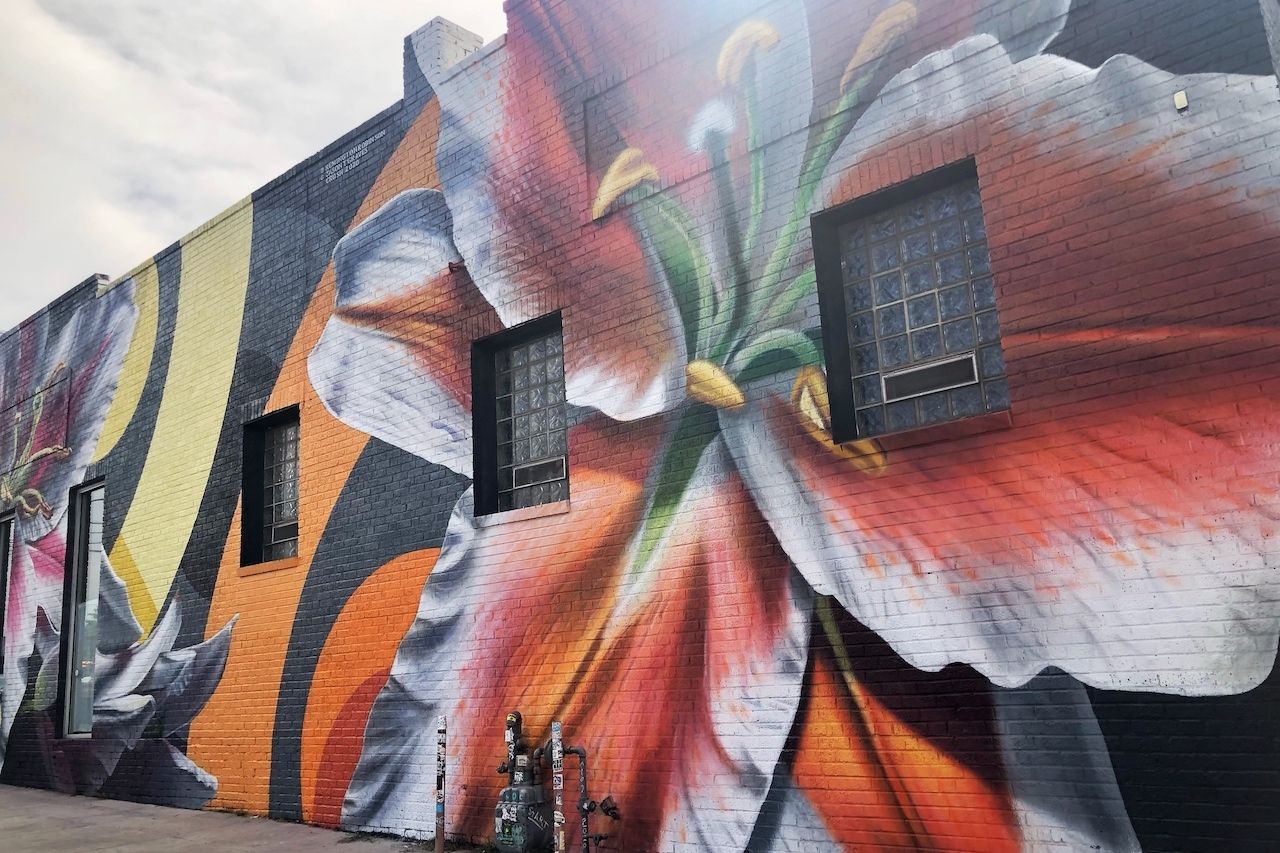 Though CRUSH only lasts a week, the art stays up until it’s painted over. You can find the full map of the walls on the CRUSH website to create your own tour. Be sure to tag the artists, and you can learn more about each on CRUSH’s artists page. 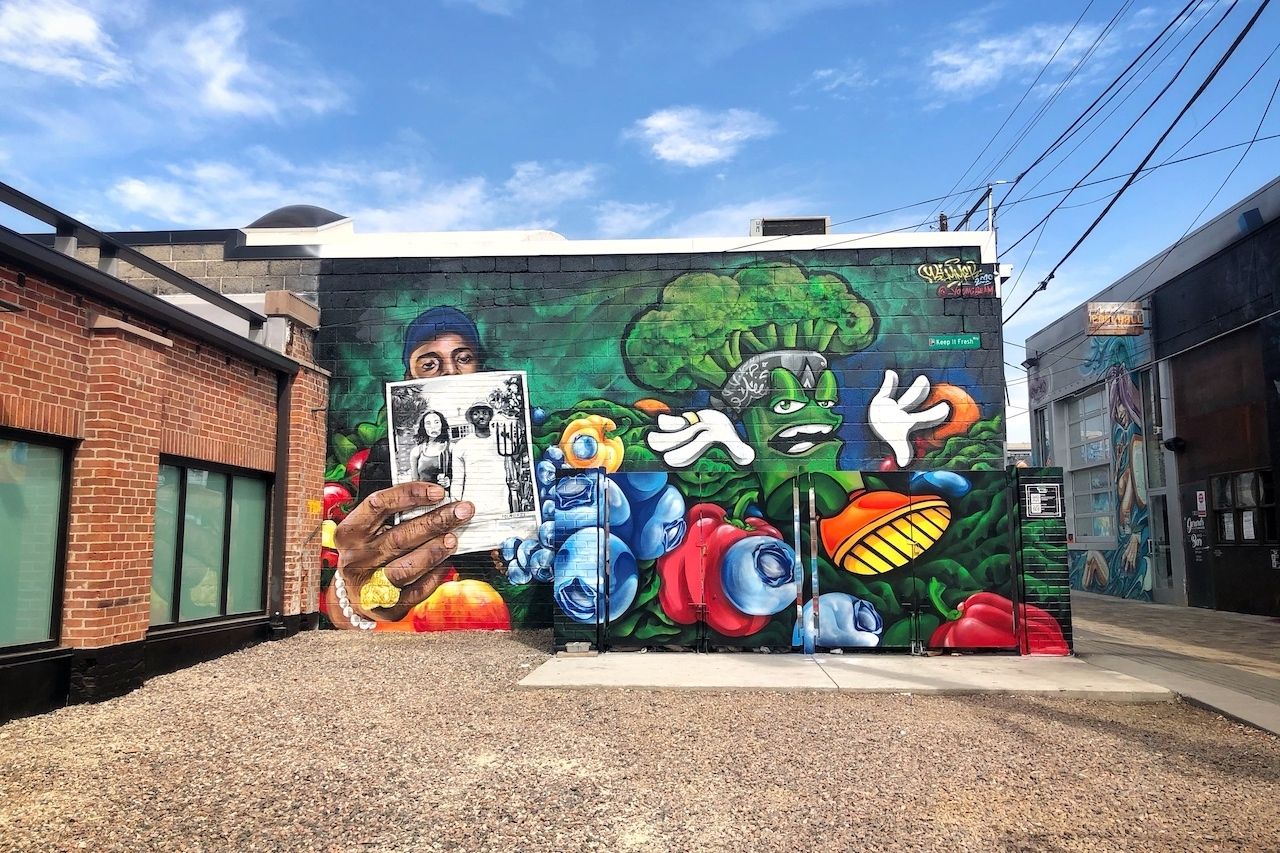