Full-wall murals, painted over building entrances, and small pieces from the Mile End neighborhood to Chinatown create a two-plus-mile-long art walk. Paintings and paste-ups fill the nooks and crannies between windows and businesses, and there’s street art literally on the streets. Not to mention the street art galleries like Station 16 and plenty of sanctioned tours. 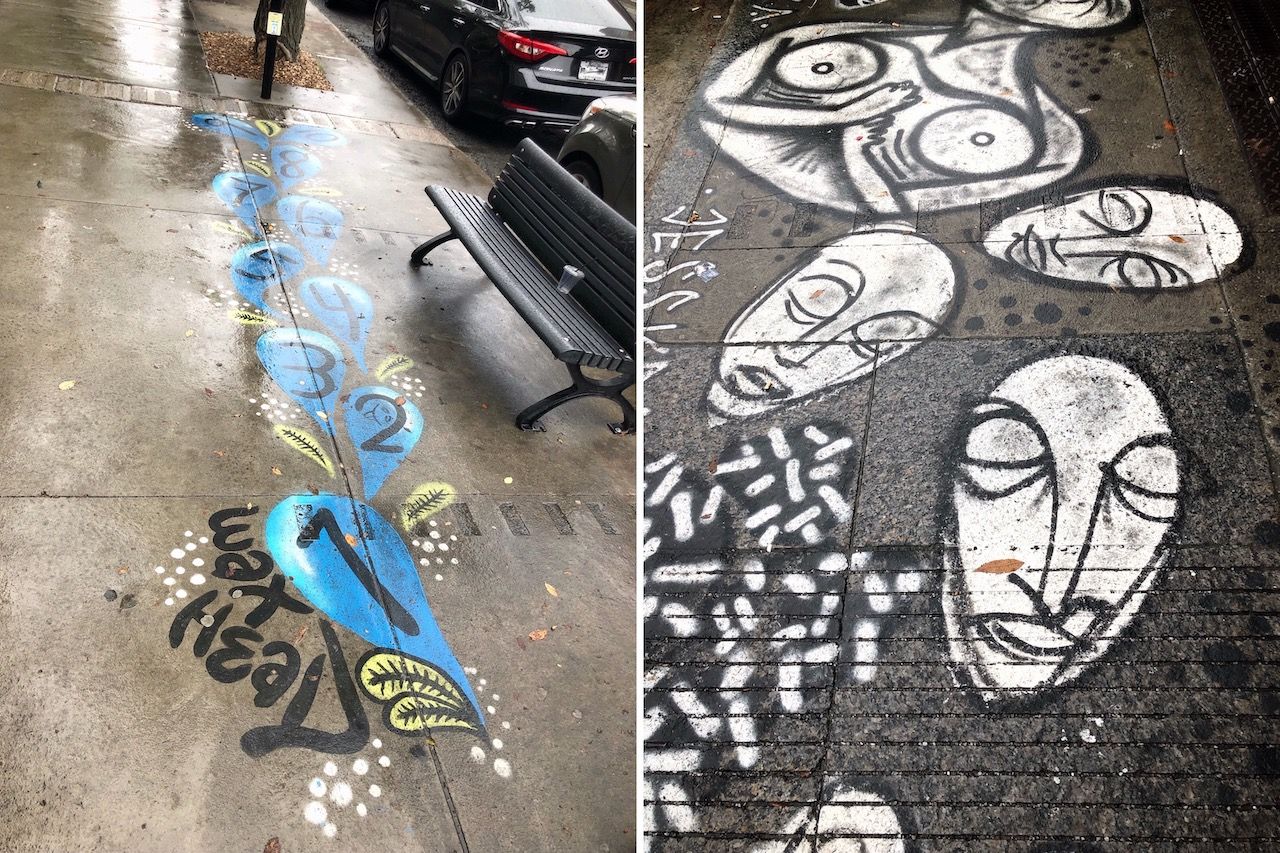 “As a street artist, Montreal’s big enough to maintain a certain level of anonymity but small enough that you can cover a lot of ground and create a certain buzz around a street campaign,” says Peter Gibson, a Montreal street artist who works under the name Roadsworth. He also adds that “there’s a bit of an ‘anything goes’ attitude in Montreal. There’s less pressure to be ‘cool’ or to fit in, which I think can be conducive to experimentation.”

While Gibson has a different definition for street art, graffiti, and mural art, “at the end of the day it’s just semantics.” Little Burgundy, Notre-Dame-de-Grâce (NDG), and Hochelaga are the best neighborhoods for graffiti, while the Plateau, Mile End, and Mile Ex neighborhoods have the most street art with posters, paste-ups, and stencils. The Plateau is also the center for murals thanks to the Mural Festival.

Festivals are one of the biggest things pushing Montreal’s, and Saint Laurent’s, street art forward. An annual graffiti and hip-hop festival called Under Pressure that’s held in Quartier Latin has been running since 1996, making it the longest-running festival of its kind. Then there’s the Mural Festival, which started in 2012. The Mural Festival invites artists from around the world to take over a portion of Saint Laurent. Every June, the artists paint large-scale murals live in front of millions of festival-goers. As of 2019, the festival has added nearly 100 works to Saint Laurent. The art stays up after the festival (at least until it eventually gets painted over in subsequent festivals), adding to the legal murals paid for by Montreal’s public art program, the semi-legal works, and the illegally painted street art along Saint Laurent. 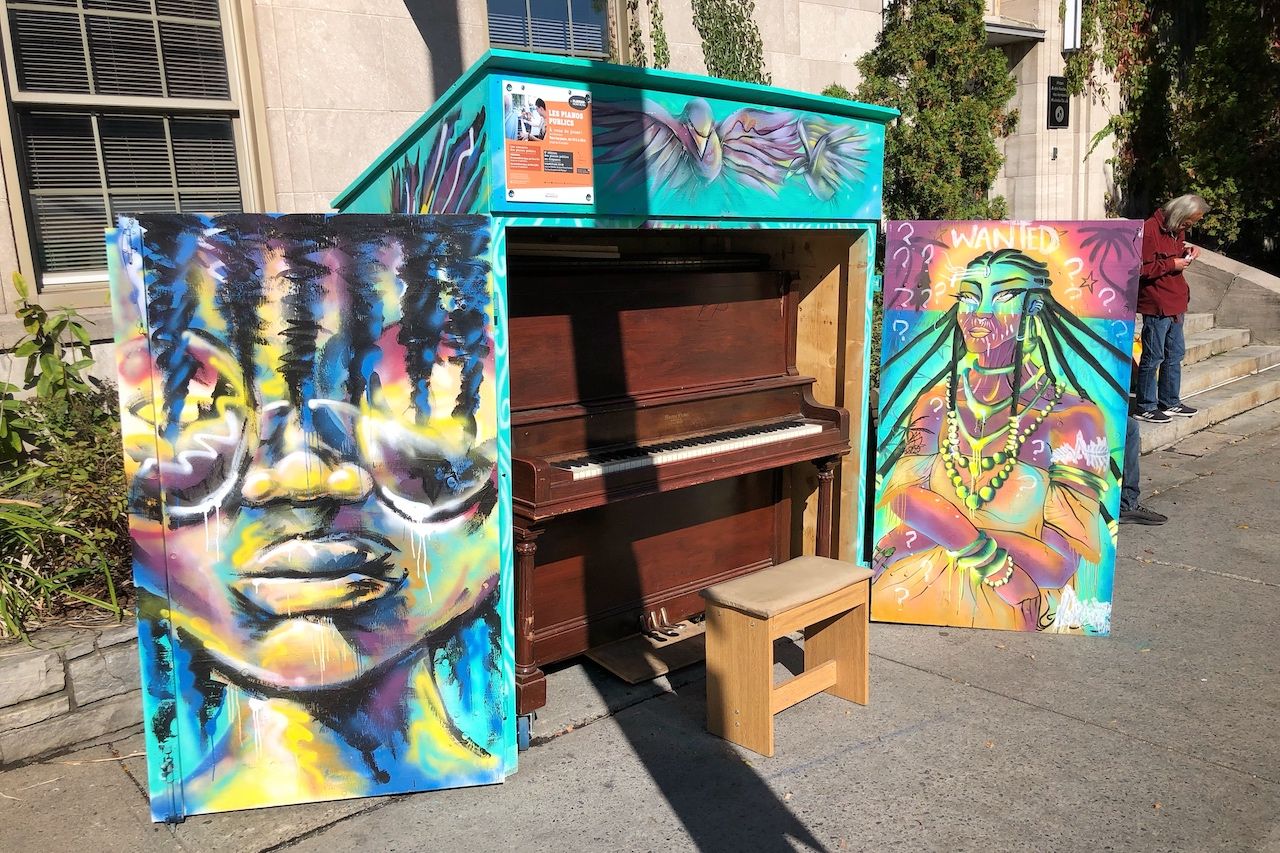 The pieces that define the city are as diverse as they are plentiful. Take the piece on the building of Dirty Dogs. Done by an American who paints by the name Buff Monster, it depicts colorful, one-eyed anthropomorphized ice cream cones. Another shows an elderly lady spray painting a wall orange. This one was done by the street art group Ashop, which started in Montreal in 2009 and claims to have collectively painted more than 100,000 square feet of walls in six countries for 250 clients. One of Gibson’s favorite artists is Labrona, whose paste-ups and drawings are found mostly around Plateau and Mile End. Plateau has what Gibson believes is the highest concentration of artists, though gentrification is rapidly pushing out artists who can no longer afford rent and studio space.

Other works you might see include graffiti tags, sculptures, and structures that play music. This embrace is part of how the city came to be called Mural City. It’s no accident that Montreal, and Boulevard Saint Laurent in particular, became a hub for art. The city and state provide tax breaks to private businesses that set aside $100,000 or one percent of the construction cost to art installations.

Not every piece you see on the street is a sanctioned one, though. Montreal has its fair share of famous artists who work without permission, as well.

“I think the general population [of Montreal] might be more open to that activism than other cities since Montrealers and Quebecers in general, given their history, have a certain rebelliousness compared to the rest of Canada,” Gibson says. “Quebecers have a strong sense of justice and a tradition of resistance to power. Montreal has always appreciated and celebrated the rebellious spirit. Most of Montreal’s greatest heroes were rebels in one way or another.”

One of the most famous goes by the name MissMe. Her works are wheat-pasted onto walls, and each has an activism angle that addresses issues of race, gender, and class (though she too has worked with brands and official installations, as well sold pieces to Madonna). In Montreal, the line between street artist, sanctioned artist, and activist artist working illegally is blurry.

Today, an increasing number of cities around the world agree that more street art is better than less. With street art, the city turns into an ever-changing museum of murals that’s open to all. There are few streets where that’s more obvious than Montreal’s Saint Laurent.

All you have to do to find street art on Saint Laurent is step outside and look around. Deep dives into the hundreds of pieces on the street and the rest of Montreal can be found on the local blog Wall2Wall Montreal. The city’s tourism department has a list of larger pieces as well. As a primer, follow this map and keep an eye out.

Art + ArchitectureToronto is Canada’s most colorful city. Here’s how to take it in.
Tagged
Art + Architecture Trip Planning Montreal, Canada
What did you think of this story?
Meh
Good
Awesome

13 epic Airbnbs in Montreal for a bachelorette weekend

9 things people from Montreal have to explain when traveling

15 superpowers you gain growing up in Montreal

11 must-have experiences to have in Montreal