There are many things we associate with Amsterdam: the tiny canal houses, the sheer number of bikes and tourists, the lingering smell of marijuana hanging in the air. Another defining characteristic of the Dutch capital is its street art. Explore beyond the confines of the immediate city center, and you’ll find random letters scrawled across brand new bridges and walls along the highway painted in vibrant colors. Amsterdam is full of artists who create murals with thought-provoking messages and political statements that take up entire buildings. Whether you love graffiti and consider it a true artform or hate it and call it vandalism, there is no doubt that in Amsterdam, it offers a unique way to take in the local culture. So, check out the following locations to get a whole new perspective on the city.

The lowdown on Amsterdam street art 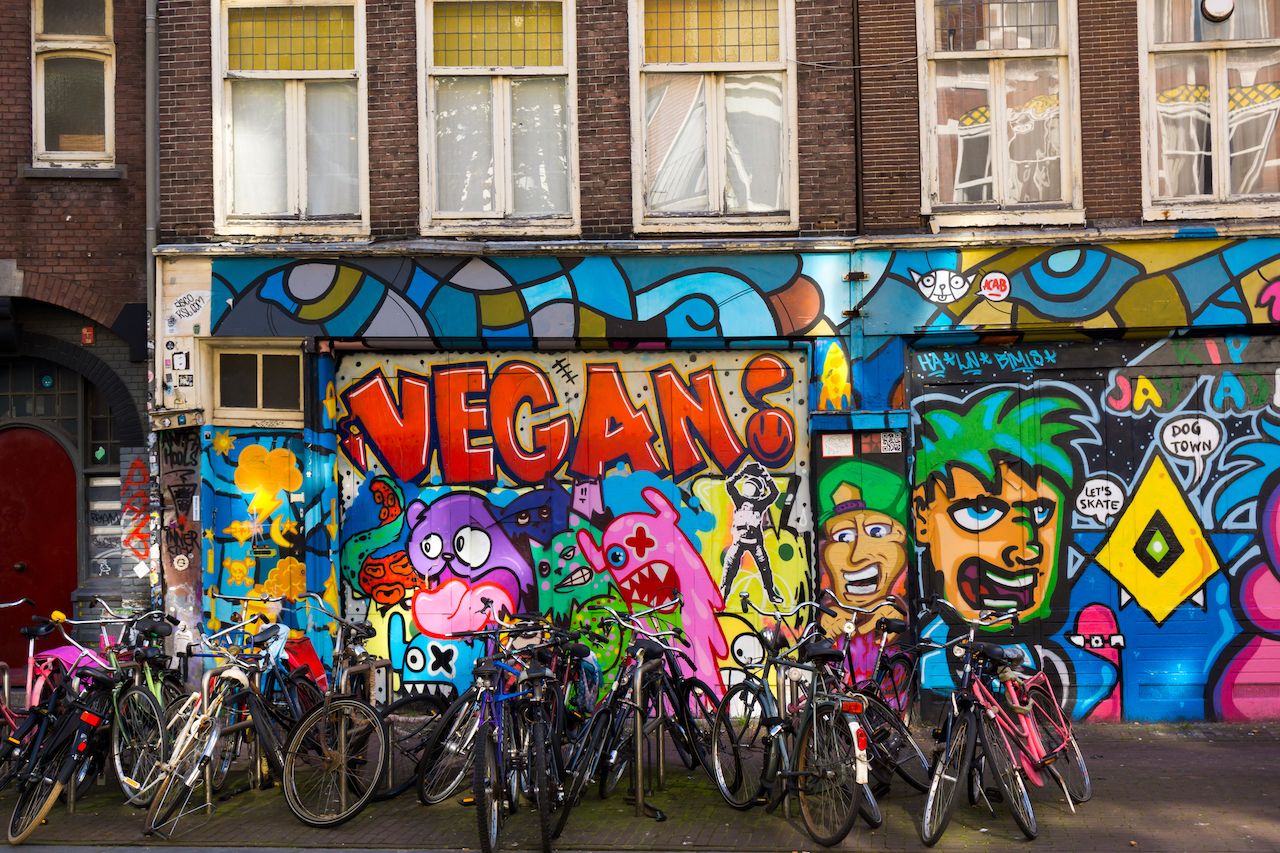 The current fine for getting caught spraying graffiti in Amsterdam is 140 euros, or about $155. Beyond the cost, the police will generally confiscate materials, like spray cans, found on site. However, the ever-pragmatic Dutch have taken steps to decriminalize the act by promoting the people who are brilliant in their craft. As attitudes have shifted, the municipality has given graffiti sprayers commissions, sponsored them, and even created exhibitions featuring their work.

Some very talented artists have come out of the Amsterdam street art scene, with many now showing their work in exhibitions all over the world. Boris Tellegen, who creates 3D imagery under the name Delta, showcased 30 years of his work at the MIMA in Brussels in 2017. He also picked up the award for Best Street Artist during the Dutch Street Art Awards. Another artist rising from the Amsterdam scene is Hugo Kaagman, who has been creating stencil art since 1978. He became popular enough that he was commissioned to paint more than 10 Boeing airplanes for British Airways. 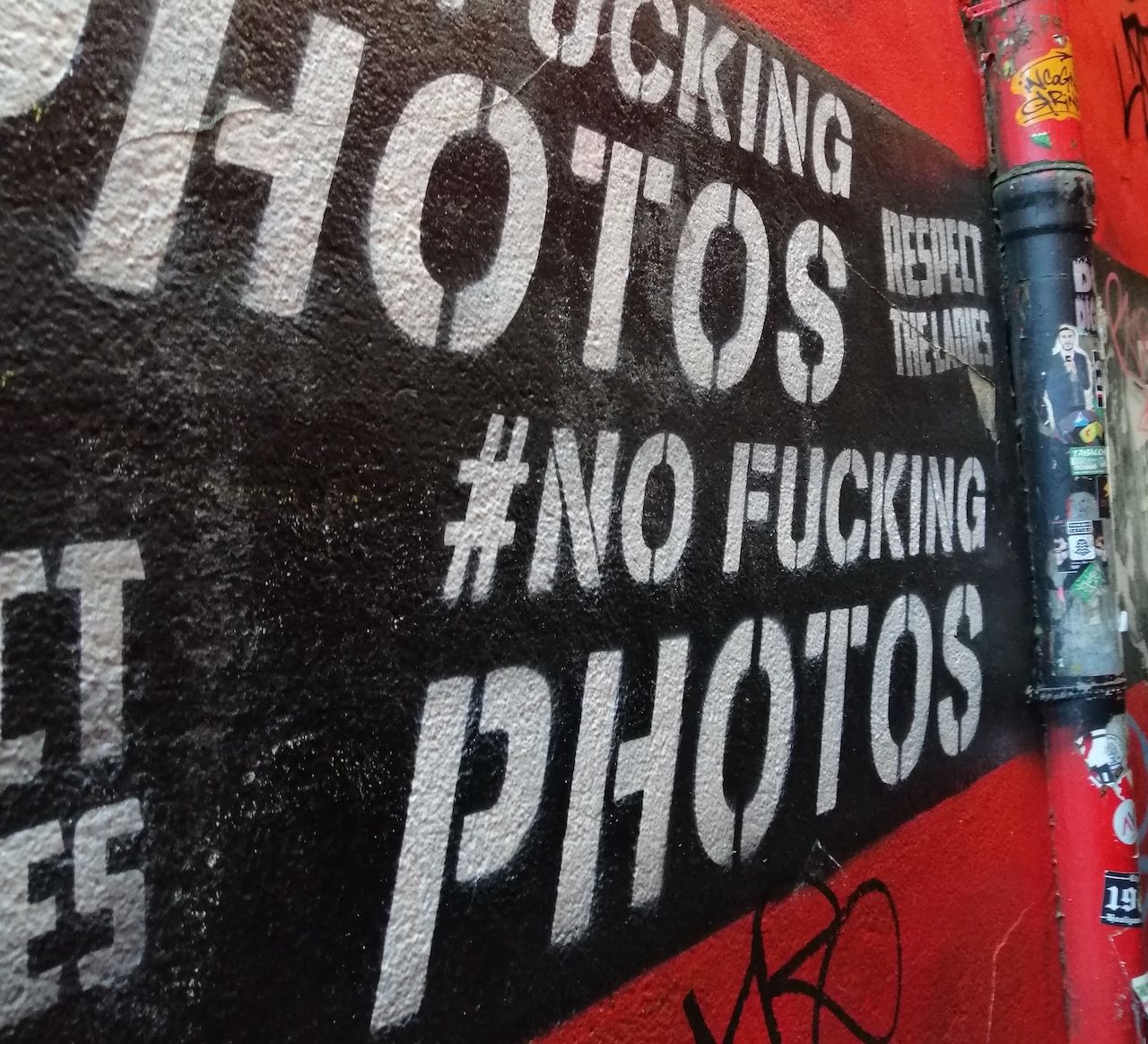 The Red Light District is one of the most-visited areas of Amsterdam, with tourists desperate for a glance at the sex workers in the windows and the chance to say they’ve been there. However, for the sex workers themselves, the era of the smartphone is making their lives exceptionally difficult. Tourists walk by, gawking at the girls in the windows, laughing and pointing, many of them on a walking tour of the area. They pull out their phones to snap photos to send to friends back home or to post on Instagram. For the women behind the windows, this is an exhausting part of their daily life.

On Trompettersteeg, known as Amsterdam’s narrowest alleyway, you will find street art with a message. Initiated by Rondom de Oudekerk, in collaboration with the Amsterdam Street Art Foundation, the #nofuckingphotos campaign was started. All along the alleyway you will find graffiti with #nofuckingphotos in hopes that tourists will either take pictures of this and post it to Instagram, or at least see it and remember to respect the human beings behind the windows. The project also features art by Beazarility and Sjem Bakkus. 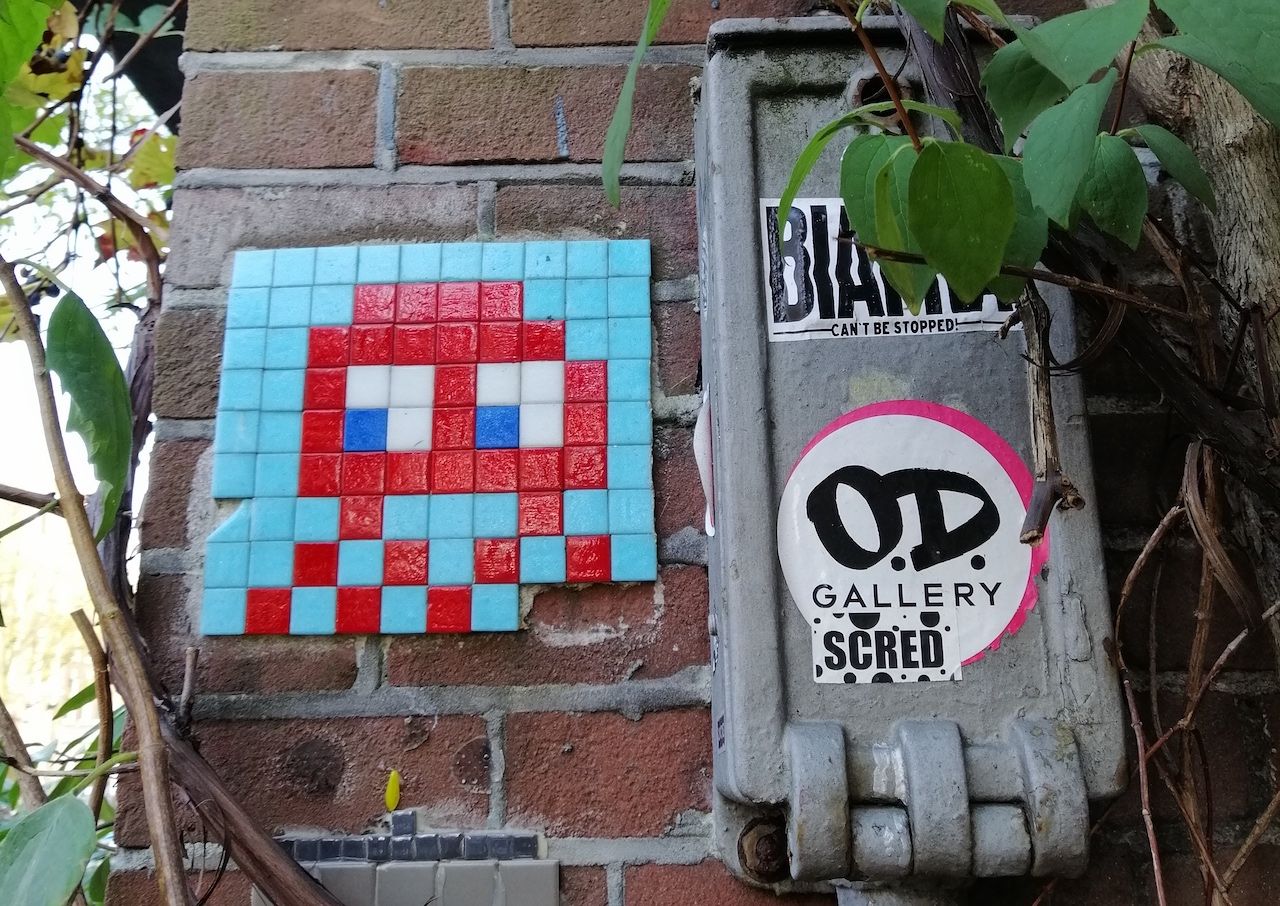 In 1988, the French artist Invader began creating pictures of Space Invaders with ceramic tiles in urban areas. The artist remains currently active, though much like Banksy, nobody knows his real identity. He has placed these Space Invaders in over 30 countries worldwide, and you can see some in Amsterdam as well as Paris, which has over 1,000.

The artist writes on his website, “In my own eyes, they are the perfect icons of our time, a time where digital technologies are the heartbeat of our world. As these creatures are made of pixels they are in some sorts ready-made for tile reproduction. Finally, their names are literally predestined for the project I have pioneered: they are Space Invaders!”

Invader came to Amsterdam in 1999 and placed 26 of the ceramic tiled art throughout the city. However, much to the dismay of people who enjoyed spotting them, the municipality had many of them taken down in 2013, and now only 11 of the originals still remain. A copycat artist called AmsterInvader came along in 2005 and placed 145 Space Invaders throughout the city, with some in other Dutch cities like Groningen and Rotterdam, so many of the invaders you spot now will probably be his. If you really want to make a game out of spotting these Space Invaders, you can download the Flash Invaders app — for every Space Invader you spot, you get points.

3. If Walls Could Speak 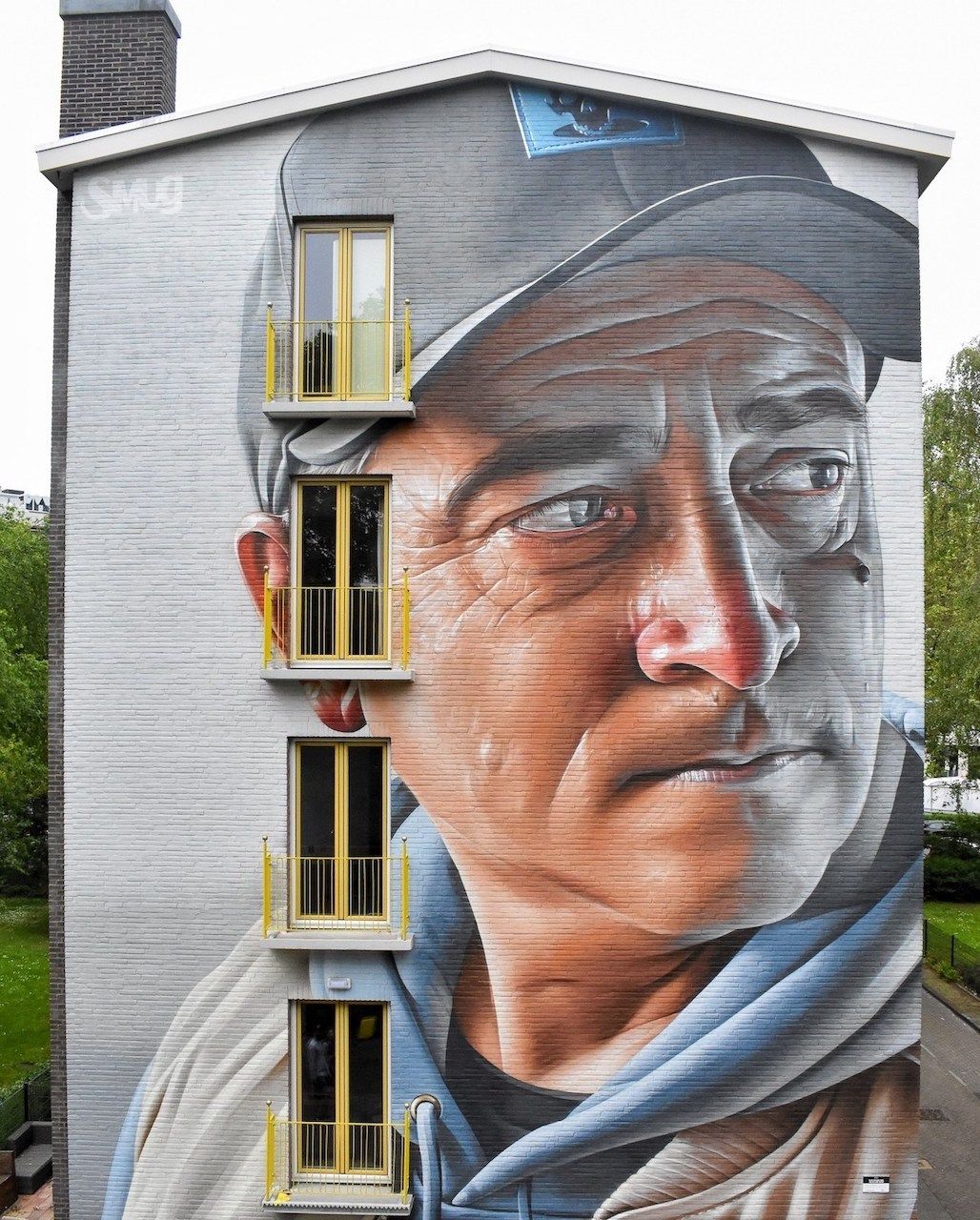 From May 13 to 19, 2019, the Amsterdam Street Art Foundation organized a street art festival called “If Walls Could Speak” in which 10 murals were created along housing blocks in Amsterdam Oost. Selected artists, including DANK, Studio Giftig, and Julieta XLF were chosen to create the murals for the event, built around the theme of “Amsterdam For Everybody.”

Housing cooperation Stadgenoot is “progressive in the field of developing creative and togetherness living environments where everybody feels at home,” according to its website. The collective partnered with Amsterdam Street Art to create murals that carry their own individual message. The most memorable of which was painted by the artist Herakut, who embedded calligraphy in hers that says, “When it comes to settling disputes, patience and compassion are often more useful than magic.” To view these murals in Amsterdam Oost, visit Platanenweg, which is easy to get to by tram from the city center. 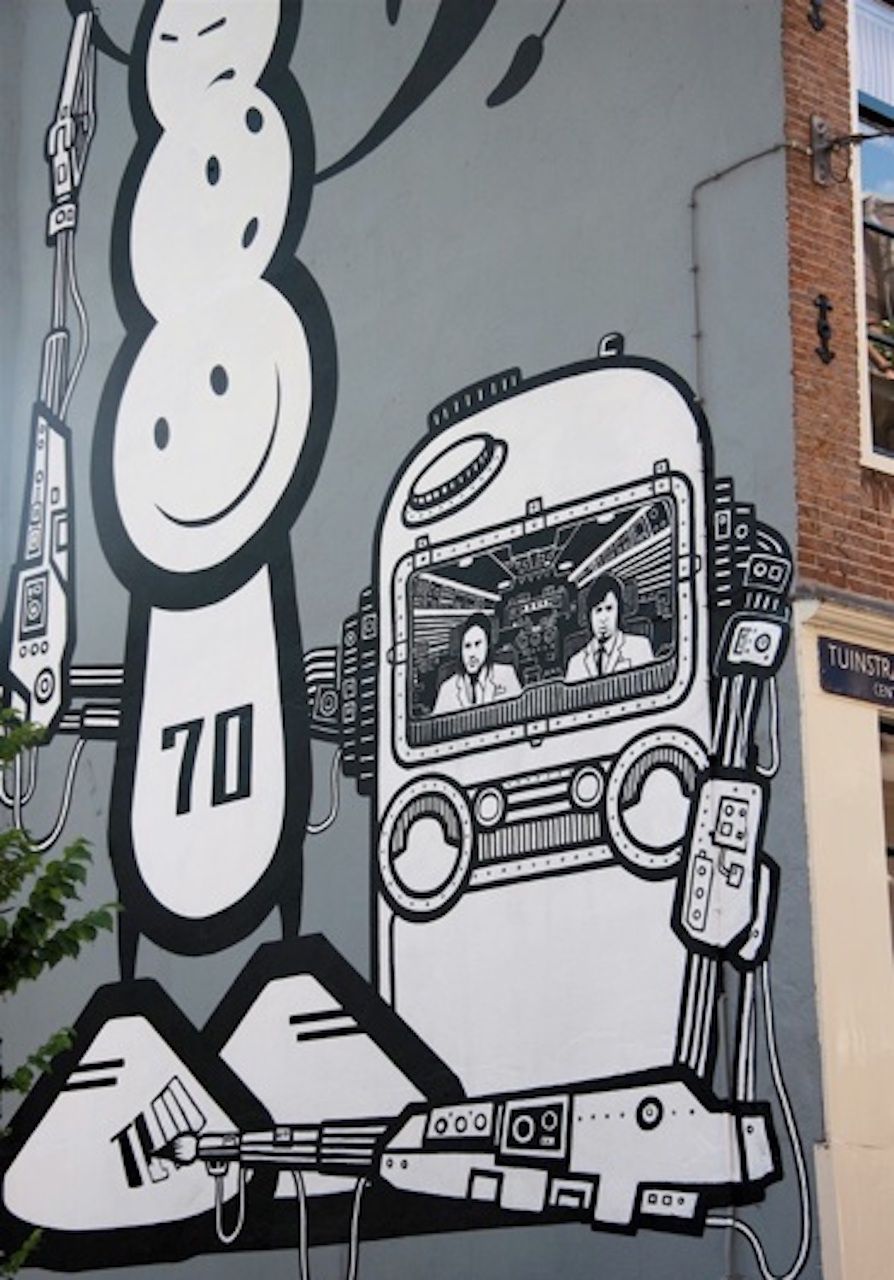 English duo Chaz and Bob Gibson began creating street art in Amsterdam in 1998 under the name The London Police. Today, a huge mural depicting their iconic black-and-white characters is featured on the side of a building on Prinsengracht. The duo was shut down by authorities while creating the mural, an event that triggered some local outrage following a message posted to the group’s website in 2009:

“How pleasing it was when the seemingly nice bloke who lives at Prinsengracht No.70 allowed TLP to adorn the facade of his building with a choice black and white image of a totem pole lad being constructed by a Bob Gibson robot. How displeasing then, when on the fourth day, the Amsterdam Gemeente (city council) officials arrived and politely told us we needed extra permission to paint any building in the city centre. They kindly allowed us to finish the characters but we were not allowed to make a start on any further background etc. The case is currently under review with the city council whether to keep the painting. They must decide whether normal everyday human beings would prefer to see an art mural or a banal grey wall which serves as a breeding ground for weak graffiti and posters advertising drug-fuelled house music events where DJs spin other people’s shit records.”

After persistent rallying from the local residents and positive support in the Dutch press, the piece was deemed to possess artistic merit and cultural significance, a happy day for the artistic community in Amsterdam. 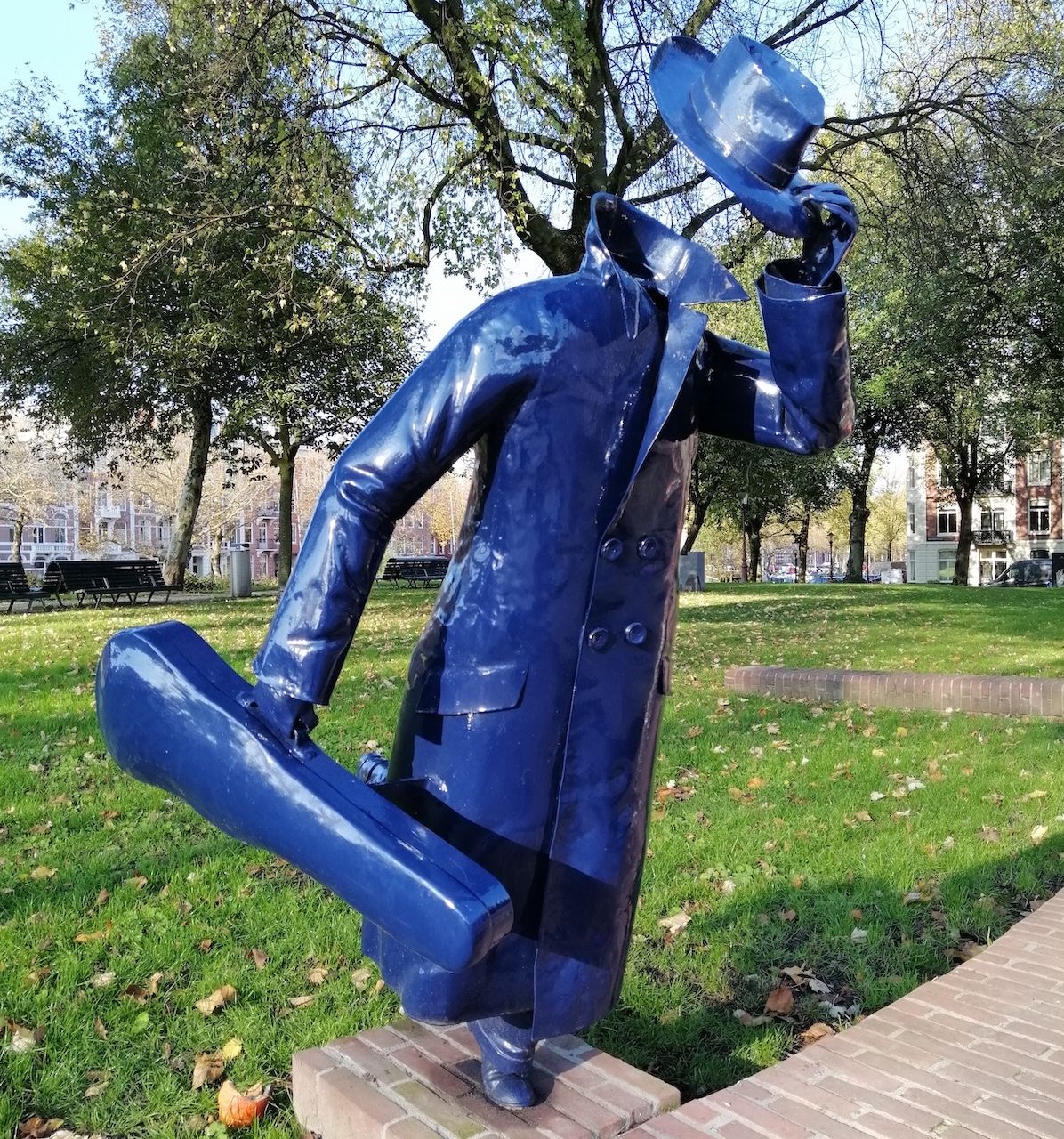 This unassuming blue statue sits in front of a park on Tweede Marnixplantsoen, and nobody knows who created it. It was placed there anonymously in 1982 and has taken on a life of its own within the Jordaan area. At one point, a few years after its creation, the municipality planned to take it down. However, an outcry from the residents in the area saw the statue keep its place. Locals have called it various things, like “Man Attempting To Catch Tram 10,” and even put a scarf around his neck on cold days in winter. 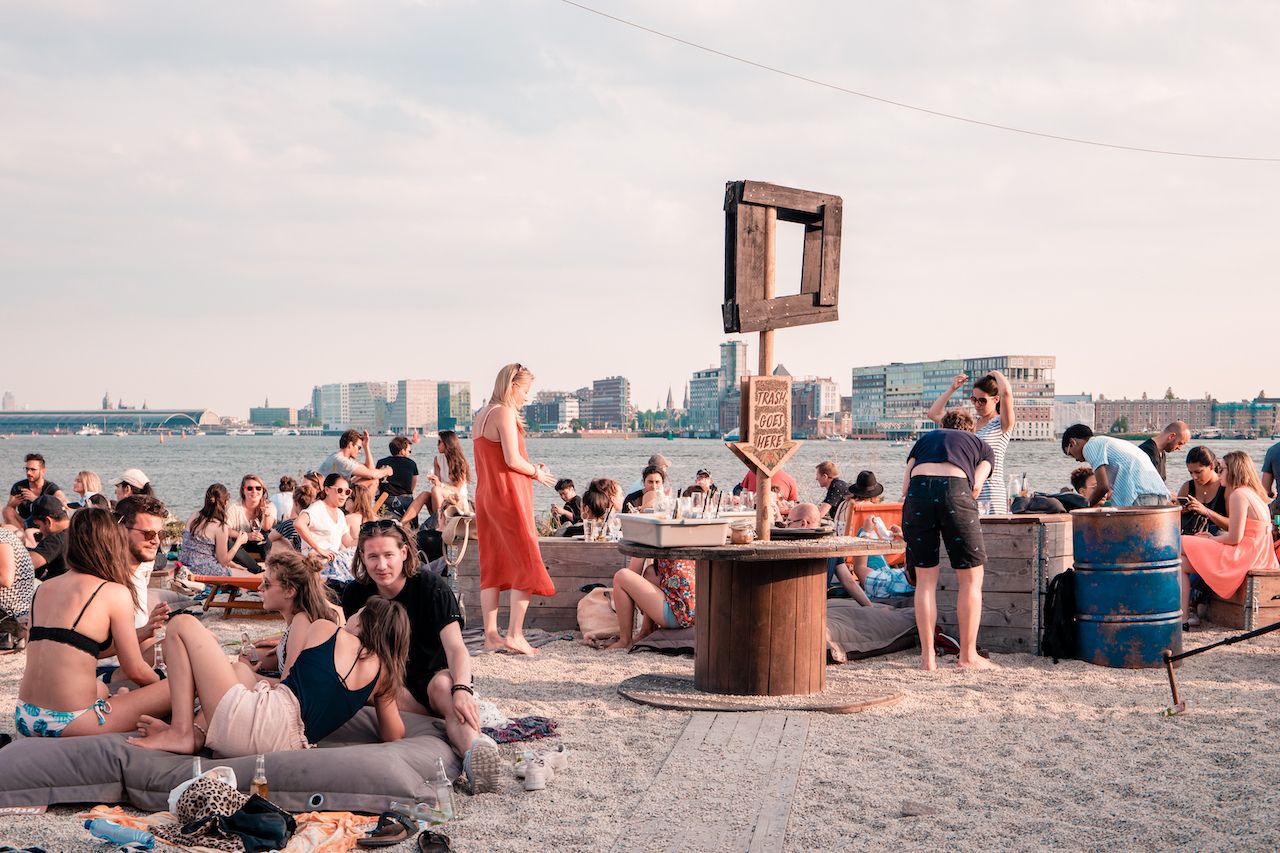 If you’re looking for a break from the busy, crowded streets of Amsterdam Centrum, head to NDSM Werf. At one time, this area was one of the world’s largest maritime shipyards, but it was taken over by squatters after being abandoned in 1984. It has since become the world’s biggest street art museum, with over 100 murals from artists like Icy and Sot, Logan Hicks, Karski, and Beyond. One of the most famous pieces is a tall mural of Anne Frank titled, “Let Me Be Myself,” created by Eduardo Kobra. The whole area is a cultural center with a unique artistic community and a collection of restaurants and bars for visitors. One of the largest buildings in the shipyard, Lasloods, is now home to artist studios and galleries and is also used for concerts and photoshoots.

CannabisThis Guy Smoked Cannabis at Every Single Coffeeshop in Amsterdam so You Don’t Have To
Tagged
Art + Architecture Insider Guides Amsterdam, Netherlands
What did you think of this story?
Meh
Good
Awesome