The stretch of US Highway 550 between Ouray and Silverton in Southwest Colorado is dubbed the Million Dollar Highway. There’s no definitive answer as to why. One legend says there’s a million dollars worth of gold ore in the road fill. According to another, early travelers refused to go back over the treacherous mountain road, “not even for a million dollars.” Though the name could simply reflect the highway’s million-dollar views in the San Juan Mountains.

One thing is clear, however — with less than 25 miles of pavement, the highway packs a lot of bang for its buck. Otto Mears, known as the “Pathfinder of the San Juans,” originally built it as a toll road in 1883 and though it’s now paved and passable, its winding path over Red Mountain Pass remains one of Colorado’s most stunning — if, at times, intimidating — drives. Here’s what to do and where to stop along the way.

Spend a day or two in the “Switzerland of America” 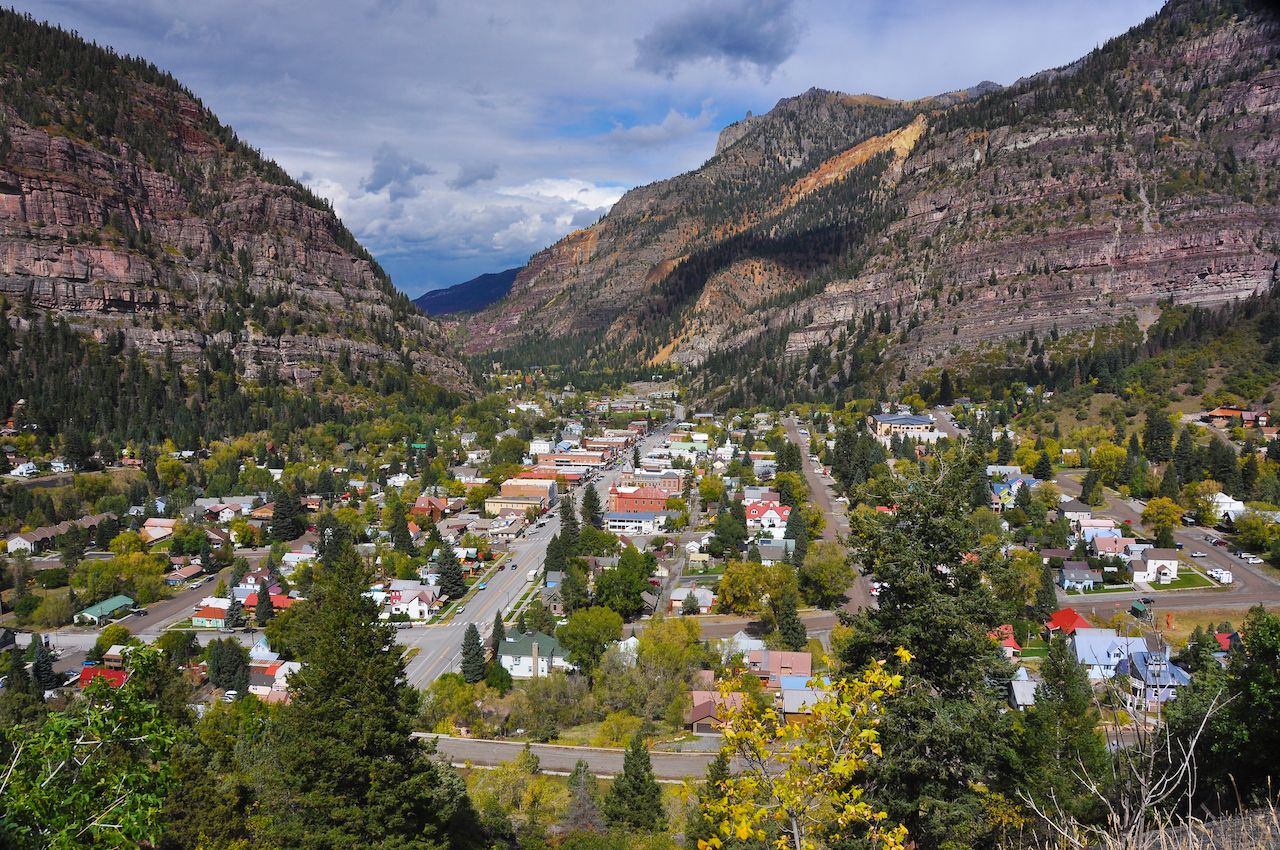 Ouray marks the north end of the Million Dollar Highway. Incorporated in 1976, it was named after Ute Chief Ouray. Since the late 1800s, it’s had the nickname “Switzerland of America” because of its resemblance to mountain towns in the Alps. Start here with an early morning hike on Perimeter Trail, an ultra-popular six-mile loop filled views and waterfalls. With multiple trailheads like Baby Bathtubs or Lower Cascade Falls, you can easily shorten the hike to make it more accessible and faster. Afterward, stop at Mojo’s. Housed in a cute Victorian-style home, the coffeehouse has great lattes and breakfast burritos and is the perfect place to relax and scroll your photos of the hike.

Box Cañon Falls is a primary draw to Ouray, located just outside of town. Head here in the morning to beat the crowds. You’ll hear the thunderous roar of the falls well before descending the caged metal staircase to the base of the 285-foot waterfall plummeting down the narrow quartzite canyon. The Black Swift is notoriously a difficult bird to spot, but you’re almost guaranteed to see one in the narrow canyon in summer since the canyon here is home to one of Colorado’s largest Black Swift colonies. Snap some shots of the falls, enjoy the cool mountain air, and then take the Native Plant Loop trail back to the parking lot for a panoramic view out across the valley.

I spent the afternoon downtown at the Ouray County Museum, housed in the St. Joseph’s Miners’ Hospital. Completed in 1887, the Catholic organization Sisters of Mercy from Denver, Durango and Omaha operated the hospital until 1964. The three-story museum houses more than 40 exhibits in 30 rooms, including several original pioneer cabins, comprising what the Smithsonian Institute calls the “best little museum in the West.” The experience takes up to two hours and includes the history of mining, ranching, railroading, and hospital artifacts from life in Ouray in the late 1800s through the early 1900s.

From the museum, go on a leisurely stroll on Ouray County Historical Society’s self-guided walking tour. It’s a great way to see some of the Victorian era homes and Ouray’s historic buildings. Signs on Main Street’s historic blocks show what each looked like circa 1883 and 1903, when the town was rich with miners, gold diggers, and others trying to, well, make it rich. Cool off with a huckleberry ice cream cone at Mouse’s Chocolates and Coffee.

You can’t spend time in Ouray without soaking in the Ouray Hot Springs. A draw for weary travelers for centuries, the 150-degree mineral water comes from the box canyon you visited earlier and flows into soaking pools ranging in temperature from 75 to 104 degrees.

There are several historic hotels for an overnight in Ouray, but my favorite is the budget-friendly and family-owned Ouray Chalet Inn for its 1960s roadside motel feel. Before retreating to your room for the night, nosh on a burger or pizza on the expansive patio at Gold Belt Bar and Grill.

Take the Iron Path to the best views of Uncompaghre Gorge

If heights don’t intimate you, then tackle the Ouray Via Ferrata, a fixed-line climbing route built by local climbing and guiding professionals. The term “Via Ferrata” is Italian for “iron path” or “iron road.” These routes originated in the Dolomites during World War I to get men and equipment into strategic positions in high-alpine, rugged mountain terrain. Here in Ouray, you can go on a guided tour or experienced climbers can tackle the route self-guided. Ascending the “Sky Ladder” at a 35-degree angle for 75 feet above the Uncompaghre Gorge is an experience you won’t soon forget. The Ouray Via Ferrata is approximately 1.25 kilometers (.77 miles) long and takes between two and three hours. Since I’m a meteorologist, my pro tip is to do this adventure early to beat the heat and summertime storms which can start as early as 10 a.m. in the high country. 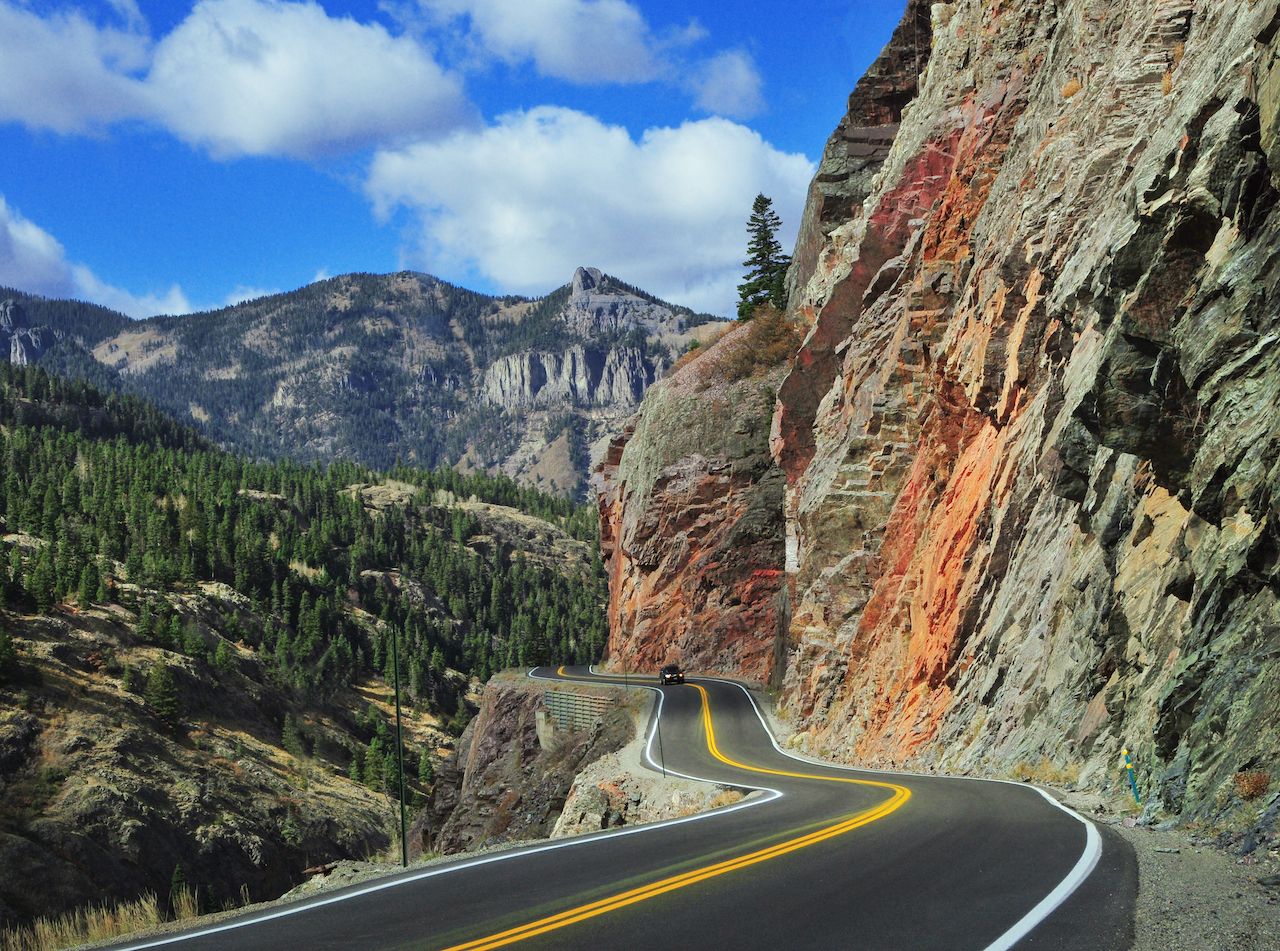 The highlight of the Million Dollar Highway is the highway itself. Allow at least one or two hours to drive the 25-mile stretch as its filled with steep grades, hairpin curves, and a precariously obvious lack of guard rails. There are also many sightseeing stops to make along the way, with pull-outs. Your first stop should be Lookout Point just above Ouray to take in a stellar view of the town. From there, the first six miles are dramatic as you drive deeper into the Uncompaghre Gorge.

Pull off for roadside views of Bear Creek Falls, the first waterfall you’ll see en route. As the road mellows (relatively speaking, at least), be on the lookout for mining relics including Ironton and Red Mountain Town, two former mining camps just off the highway. Continue heading south to my favorite spot of the mining overlook, Treasure Tunnel trestle, with outstanding views of mining relics dotting Red Mountain. Plus, there are a few historic homes in Red Mountain Town, once the largest mining camp in the area with close to 10,000 residents.

Keep an eye out for more waterfalls on both sides of the Million Dollar Highway as you drive up Red Mountain Pass to a summit elevation of 11,018 feet. Gold ore wagons first crossed over the pass in 1878. From the summit, continue the scenic drive into Silverton. You’ll see mining relics sprinkled on the mountains and roadside. 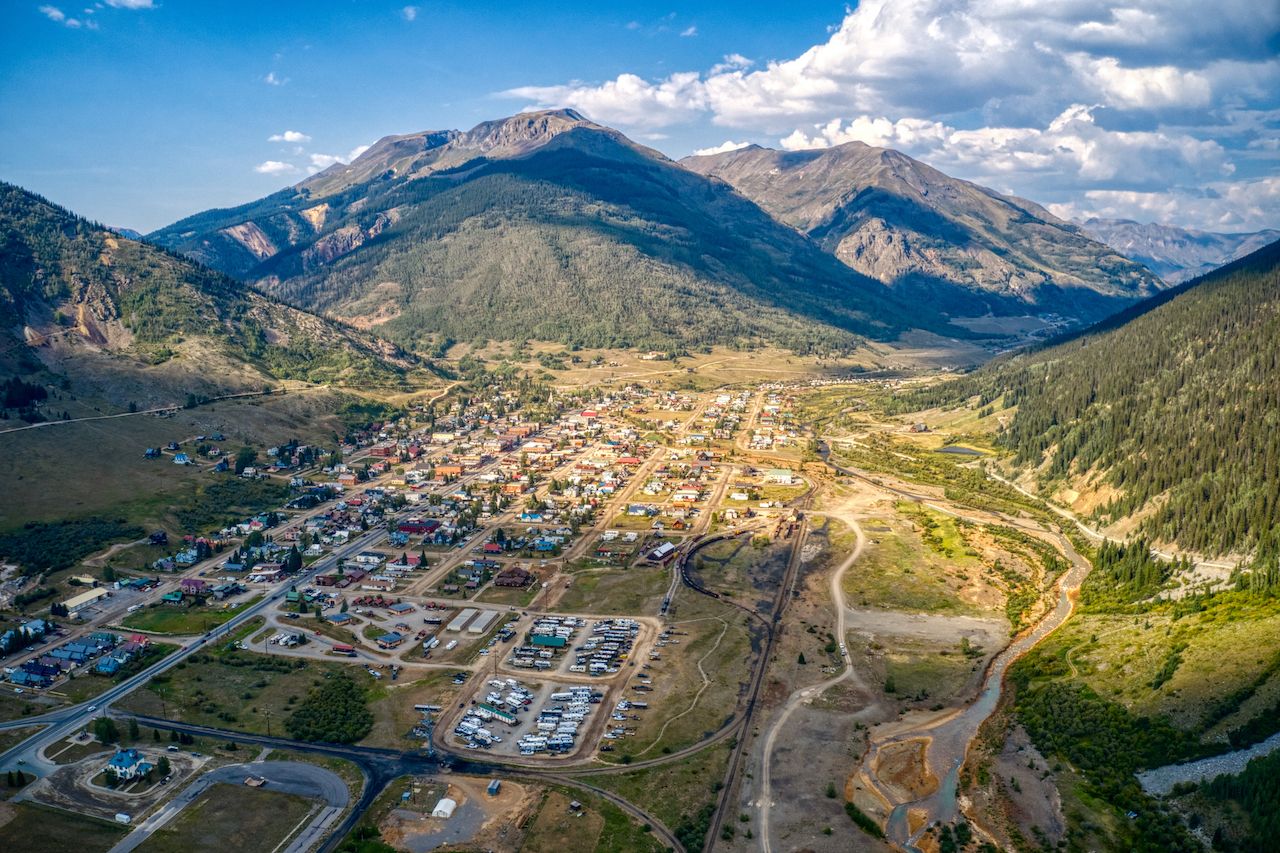 Dubbed the “mining town that never quit,” Silverton’s mining history spans from the mid-1800s to 1991. The Victorian mining town has a rich and rough history. Over two million troy ounces of gold, 51 million ounces of silver, 112 million pounds of copper, 760 million pounds of lead, and 600 pounds of zinc were mined primarily from mines at 12,000 feet in elevation or higher, a dangerous occupation that has made Silverton’s residents even today among the hardiest in the state.

Grab a latte and square burrito at Coffee Bear and enjoy the view from Silverton’s only rooftop deck. Sitting at 9,318 feet in elevation, you’ll need a jacket most mornings even in summer. Take a short drive south to the picturesque Little Molas Lake. From the campground, you can access part of the Colorado Trail and do an out-and-back hike in one of the most scenic stretches of the iconic long-distance hiking trail stretching from Denver to Durango. Storms often brew in the afternoon here so a good plan of action is to head up mid-morning and keep your hike to around three miles round trip, then grab a quick lunch at Coal Bank Café. Spend an hour or so in the afternoon at San Juan County Historical Mining Heritage Center beginning with a self-guided tour of the 1902 Silverton County Jail Museum. From there, head into the basement to wander through exhibits on Silverton’s mining history, including three levels of a former mine that make up the four-story museum.

You can also take the Old Hundred Gold Mine Tour to gather more on the town’s history. In 1872, the first of three Neigold brothers arrived from Germany to stake their claim on the “Number Seven” vein here and the three brothers would spend the next 30 years prospecting and developing mining veins in the area. One of those claims in 1898 was named “Old Hundred,” likely after the popular German hymn “Old Hundreth.” Here you ride a vintage electric train 1500 feet deep into Galena Mountain where you walk through the quartz vein tunnels, called drifts by the miners.

On my way back into Silverton, stop at the 1929 Mayflower Gold Mill. You don’t need reservations to visit the national historic landmark. As underground lode mining became the most profitable way to mine in the area, the Mayflower Gold Mill starting processing ore in 1930 and ran until 1991. Visit the Aerial Tram House and check out the remains of the 10,000-foot-long tram that carried miners on a 22.5-minute ride to the mines on the other side.

Keeping with the Old West theme, saunter into Handlebars Food and Saloon for Silverton’s classic chuckwagon supper. Spend the night at the Wyman Hotel, seamlessly blending historic and modern with a touch of funky in a building built in 1902. 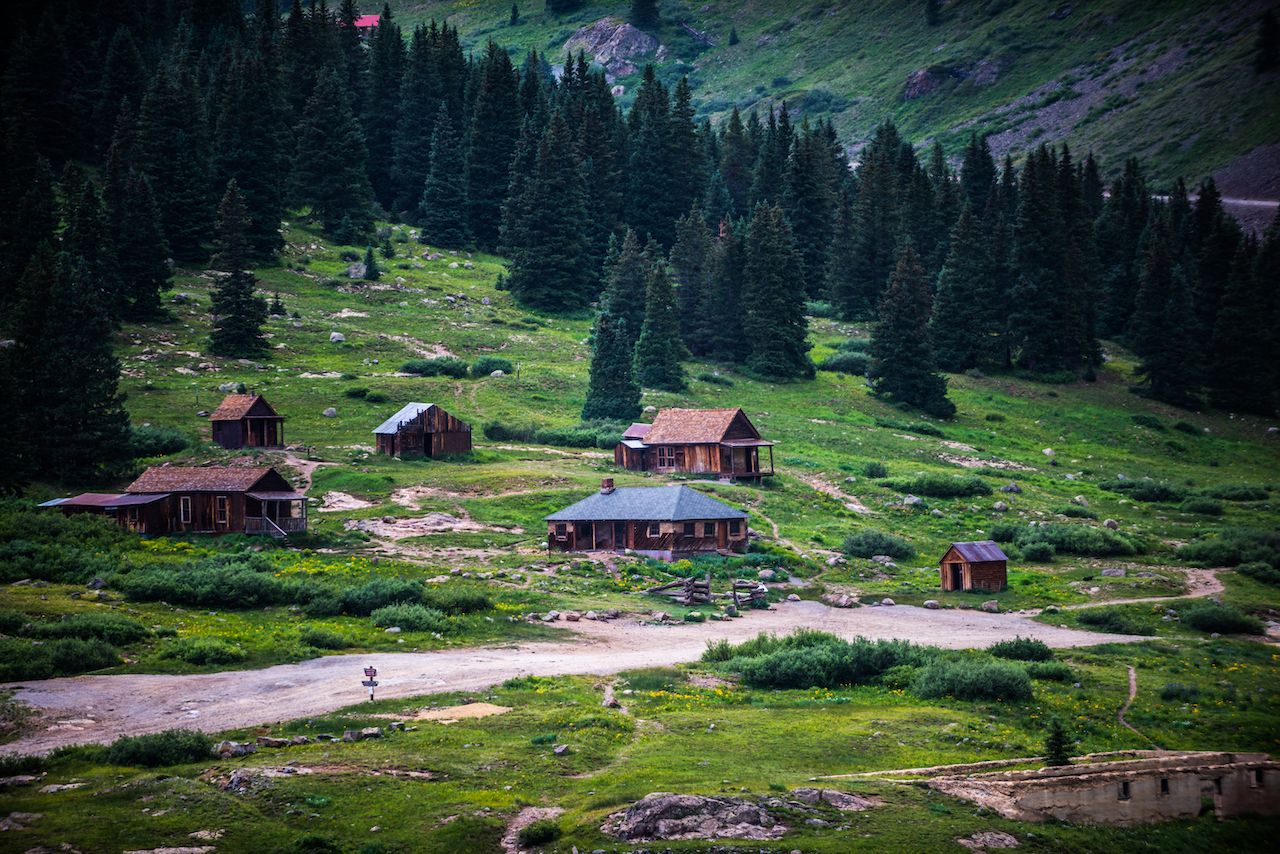 Your second day in Silverton should be spent getting above the town. Rock Pirates rents a quirky but contraption called a side-by-side, which is a hybrid four-wheeler and Jeepish contraption that can barrel up nearly anything in the high country. Rent one and follow an OHV (off-highway vehicle) route up an unimproved dirt road to Animas Forks at an elevation of 11,200 feet. Animas Forks was a small mining village that at its peak in 1883 had 450 people with 30 cabins and a hotel, general store, and saloon. It was also home to the Animas Forks Pioneer, the only newspaper ever published and printed at such a high elevation. A 23-day blizzard inundated the town with 25 feet of snow in 1884, a hit to the mining profits that eventually led to the decline of Animas Forks. By the 1920s, the town was a ghost town. You can tour some of the cabins and the jail here before heading back to town.

OutdoorBeyond the resorts, Colorado’s lesser-known mountain towns are the next big destinations
Tagged
Hiking Road Trips Colorado, United States
What did you think of this story?
Meh
Good
Awesome