Most people imagine Brazil in terms of its vibrant big cities, like Rio de Janeiro and São Paulo; its inimitable wild areas, like the Amazon or the Pantanal; and its renowned beaches. But Brazil’s complex, sometimes brutal, history of colonialism — combined with lush jungles, mountains, and endless sandy coves — has gifted the country with small towns unlike anywhere else in the world. The unique combination of architectural influences and sublime landscapes can be seen in colorful towns located in island-filled bays to Bavarian hamlets in semi-tropical mountainsides. Here are just some of the most stunning small towns in Brazil. 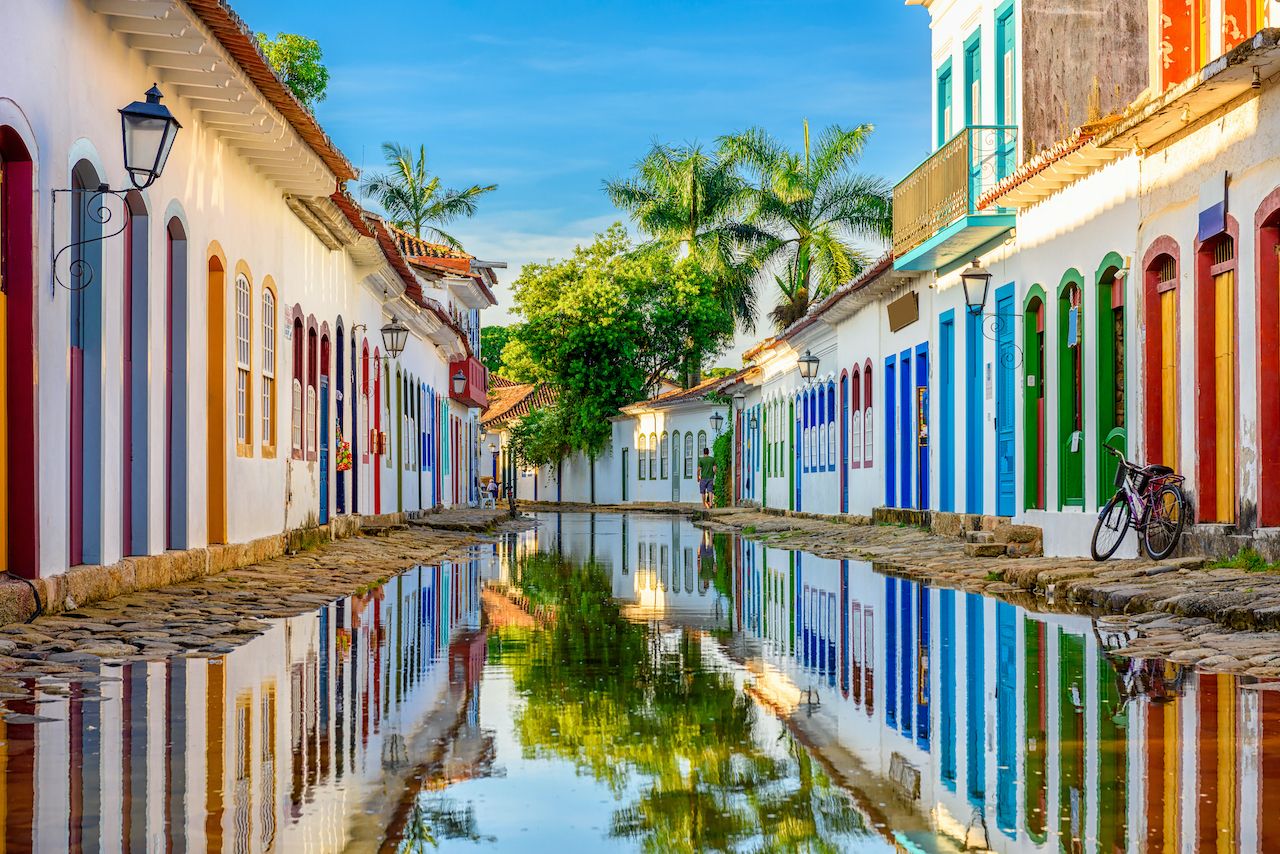 Alternately spelled Parati or Paraty, this cobblestoned town founded in 1531 in a bay south of Rio de Janeiro couldn’t be more picturesque. Whitewashed, centuries-old buildings with colorful trim compete for your attention with views of dozens of lush islands, sailboats, and the towering, sylvan mountainside behind the town. Paraty was busiest during the Brazilian Gold Rush, which predated the US one by two centuries.

After that, the port of Paraty was dedicated to the export of sugar cane, then the cachaça liquor made from that sugar cane, and later coffee. What is less appreciated is that many of the African people brought in as slaves to mine the gold and later to work the sugar cane fields and coffee plantations entered through Paraty. Today, the town’s difficult history is obscured by Paraty’s elegant inns, chic restaurants, and attractive boutiques. 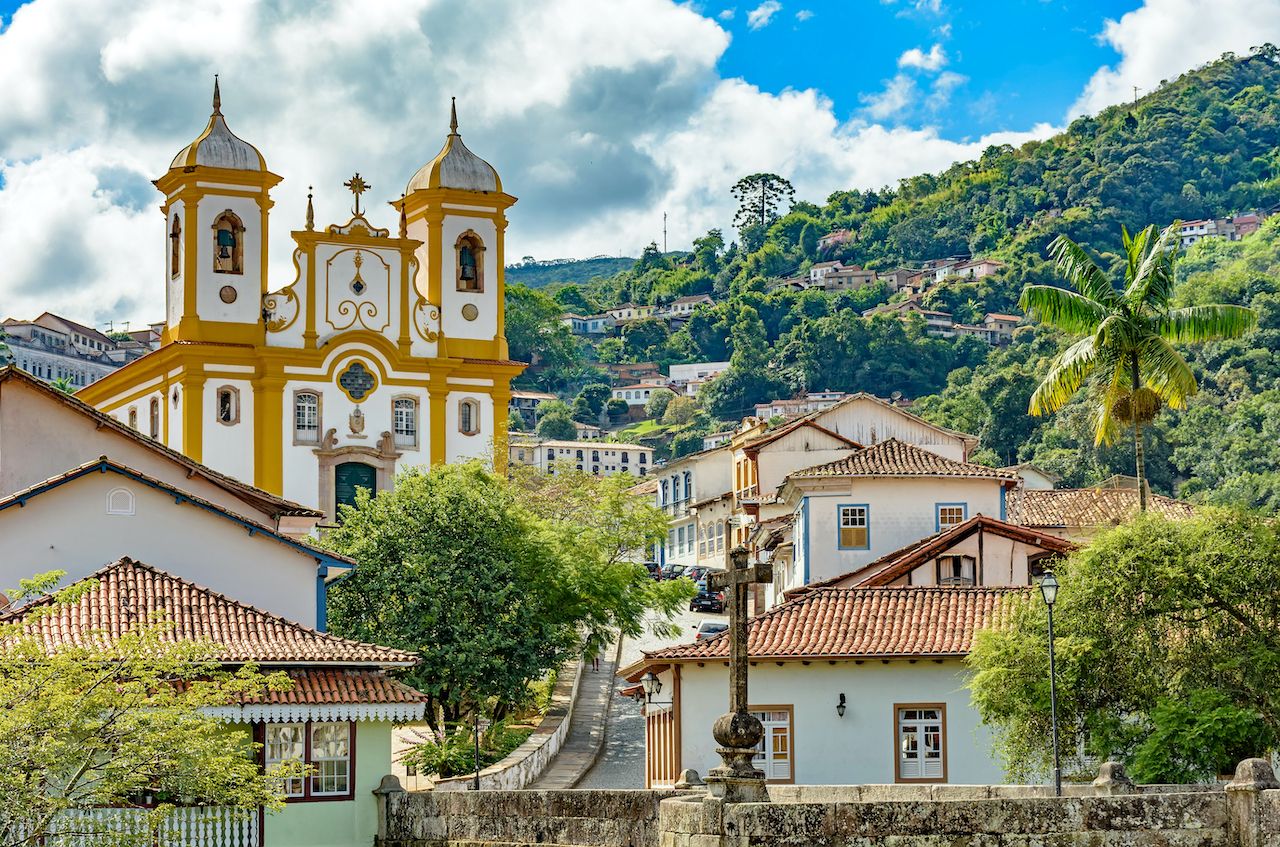 Ouro Preto means black gold, but the city’s name does not refer to oil — it is actually all about yellow gold. Ouro Preto became a center of the Brazilian thirst for gold, as the precious metal was found in the nearby mountains of what would eventually come to be called the state of Minas Gerais, which literally translates to “general mines.” Founded at the start of the 1700s on the hills of the Vila Rica, or Rich Valley, Ouro Preto soon reflected the wealth the area was producing — with hundreds of tons of gold exported to Portugal during this time.

The Church of São Francisco of Assisi is a gilded tribute to Brazil’s ornate baroque architecture of the time and is one of the most celebrated of the country’s colonial churches. Today, the UNESCO World Heritage city, with a population of 70,000, is also a university town and still a popular tourist center. Located at 3,868 feet in Brazil’s high plateau, Ouro Preto also enjoys a relatively cooler climate, making it a welcome escape from the hot coastal cities. 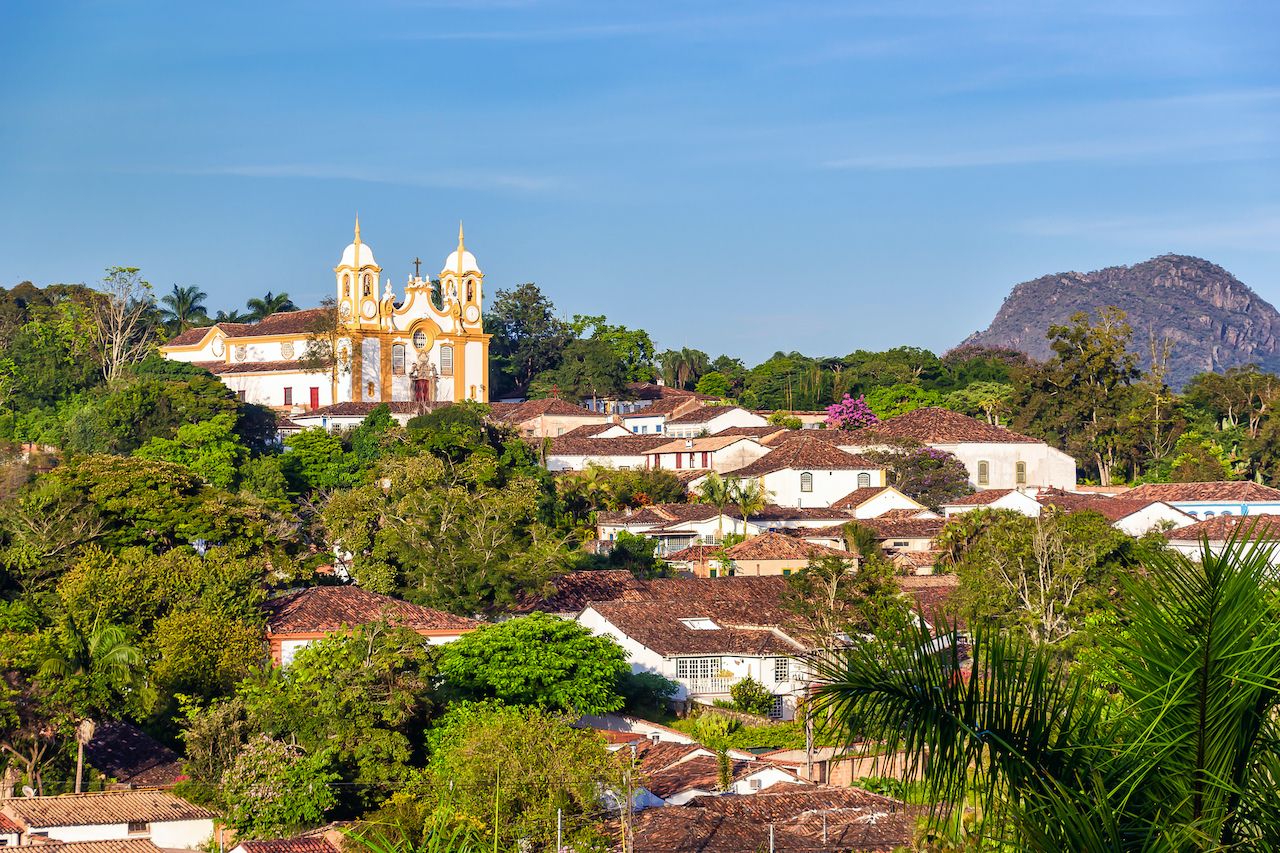 Located in the same state as Ouro Preto, about three hours away along a winding road, this mountainside hamlet is named for a Brazilian hero born nearby: Joaquim José da Silva Xavier, who was more commonly called Tiradentes. Inspired by the US Revolutionary War and facing a depletion of gold after a century of mining, Tiradentes led a pro-independence movement in the late 1700s. The Portuguese eventually prevailed, hanging Tiradentes and then displaying his body parts around the Vila Rica area to dissuade any other would-be rebels. Independence would have to wait another hundred years.

Today, a walk through the stone-paved streets of the town wouldn’t reveal much of that particular history, although the gold-leafed altar at the Church of Our Lady of the Rosary gives an indication of the wealth this area once knew. Although the mines have been closed for two centuries, Tiradentes is a protected historical area, so opportunities for photographs are aplenty. It’s also a lovely place for short hikes in the hillsides. 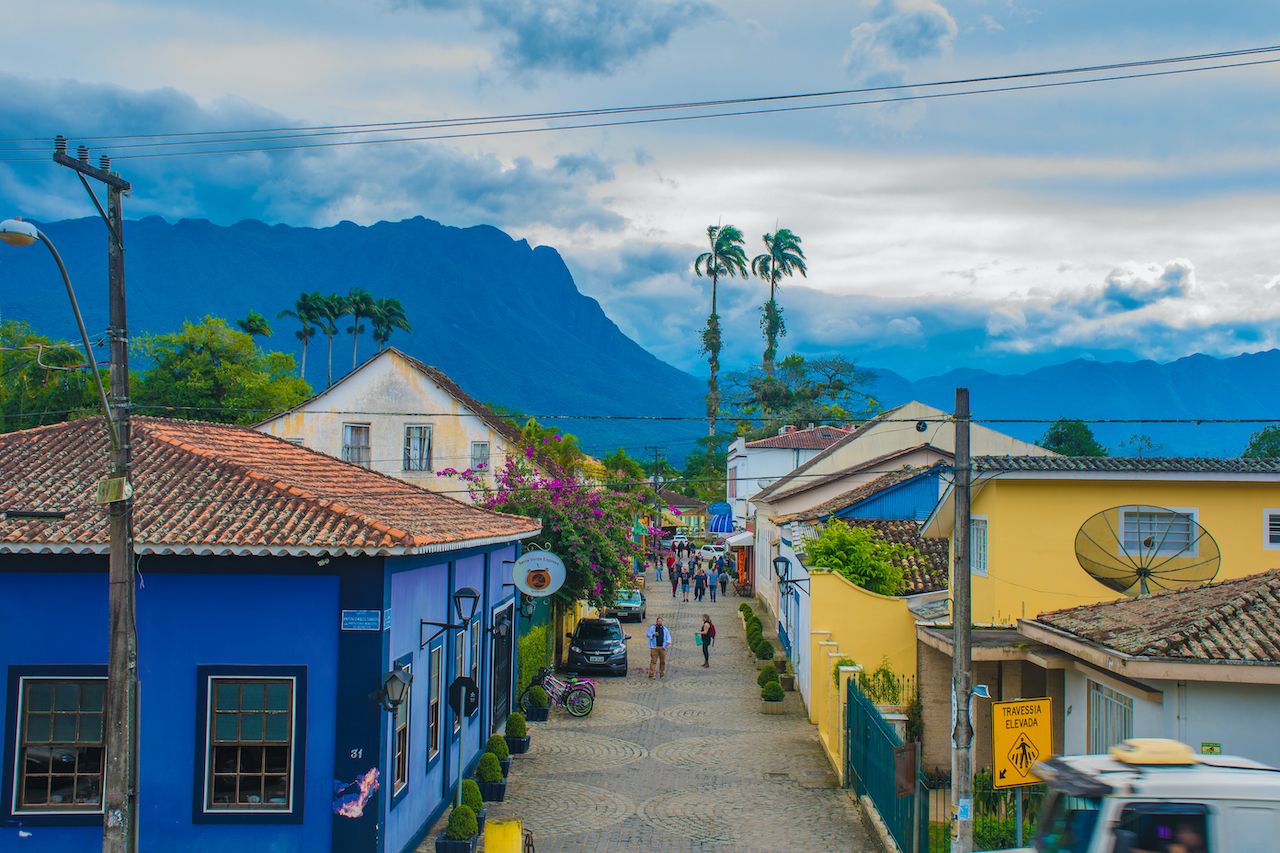 The Serra Verde Express is a train ride departing from the city of Curitiba that in and of itself is worth doing. The locomotive winds alongside the steep, lush mountainside of the Mata Atlantica, Brazil’s precious Atlantic Forest. The train slowly descends down to almost sea level, arriving at one of the loveliest towns in the region. Dating to the early 1700s, Morretes lies along the Nhundiaquara River as it works its way down to Paranagua Bay. Morretes is a great place to stop for lunch before exploring the area and taking the afternoon train back to Curitiba. The dish the area is known for is a meat-stew called barreado. But since Brazil’s forests are threatened by destructive cattle ranching practices, feel free to opt for a vegetarian option. 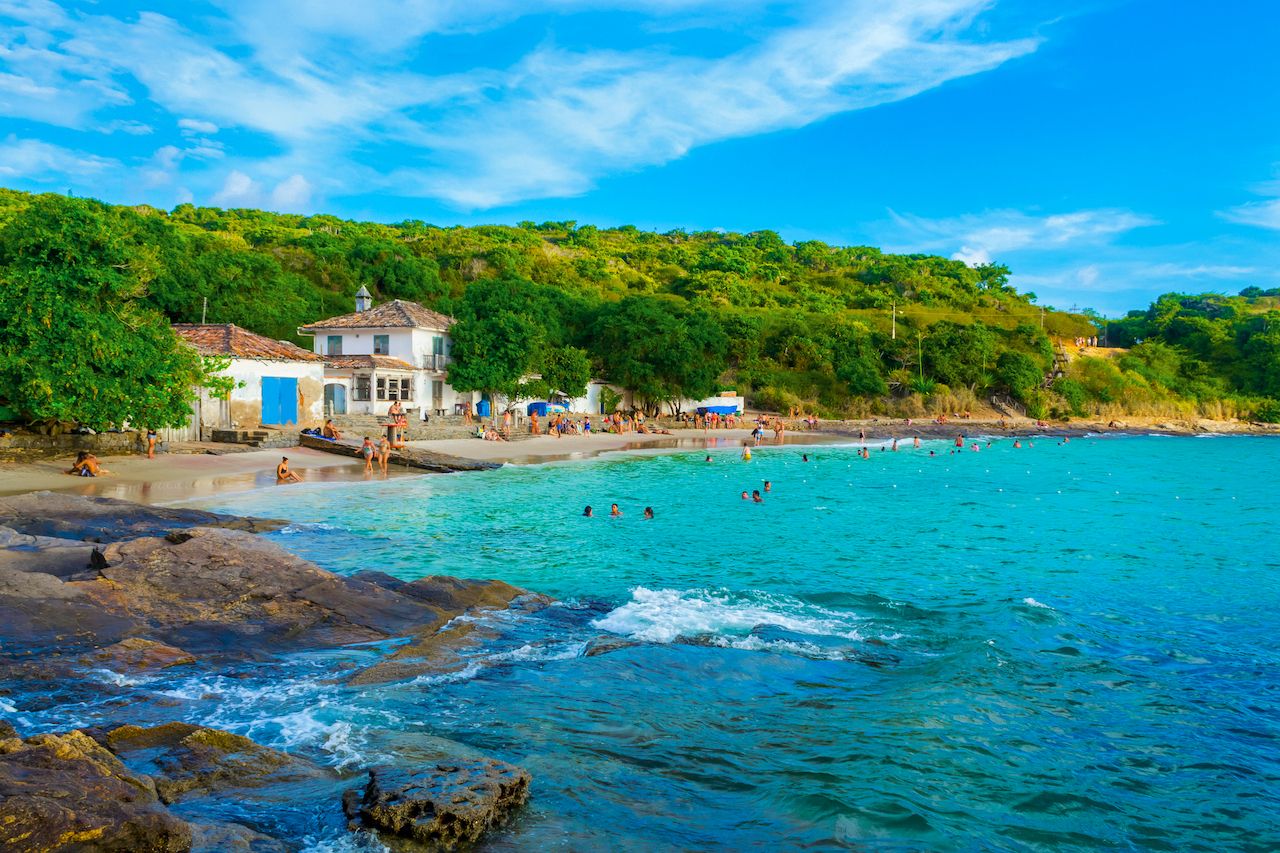 This upscale weekend beach town on a cove-filled peninsula jutting out into the Atlantic is today full of trendy pousadas, or inns, and outdoor bars. Bikini and surf shops abound, as well as a varied collection of beaches to try out the purchased beachwear and surf equipment. French pirates used to smuggle out Brazilian woods and purportedly had a working relationship with the local Tupinambá people. Buzios was also a big whaling center and one of its many beaches is still called Praia dos Ossos, Beach of the Bones.

The colonial-era buildings here aren’t as grand as those of Ouro Preto, since this was more of a smuggling port, but the lowkey historic structures lend themselves better to the town’s present-day surfer vibe. That said, head up into the hillsides overlooking the beach coves and the modern-day houses of Rio’s rich and famous are an architectural sight of their own. 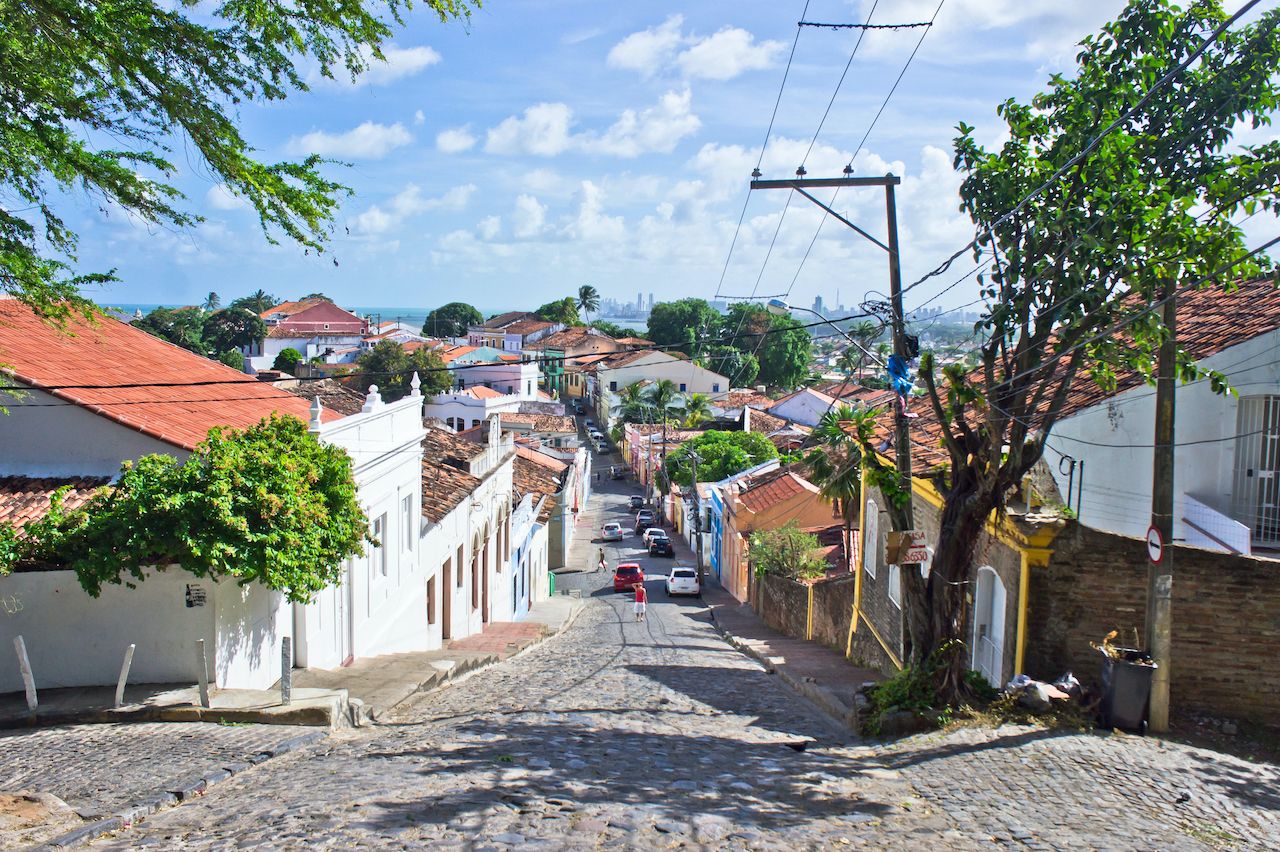 As throughout Brazil’s northeast, Olinda showcases a centuries-old wealth built from exploiting the country’s natural resources. It’s one of the oldest European-built cities in Brazil, dating to 1537. Just north of Recife on the easternmost bulge of the South American continent, Olinda was a site of exportation of sugarcane and the importation of forced African labor to work on those plantations. The cultural contribution of that African immigration is evident throughout Brazil, and most especially in northeastern states like Bahia and Pernambuco, where the annual Carnival is a tribute as much to deities brought over from western Africa — disguised under the names of Catholic saints — as it is a Christian celebration. Here, as in the state of Bahia, you can enjoy African-enhanced flavors made with dendê oil. 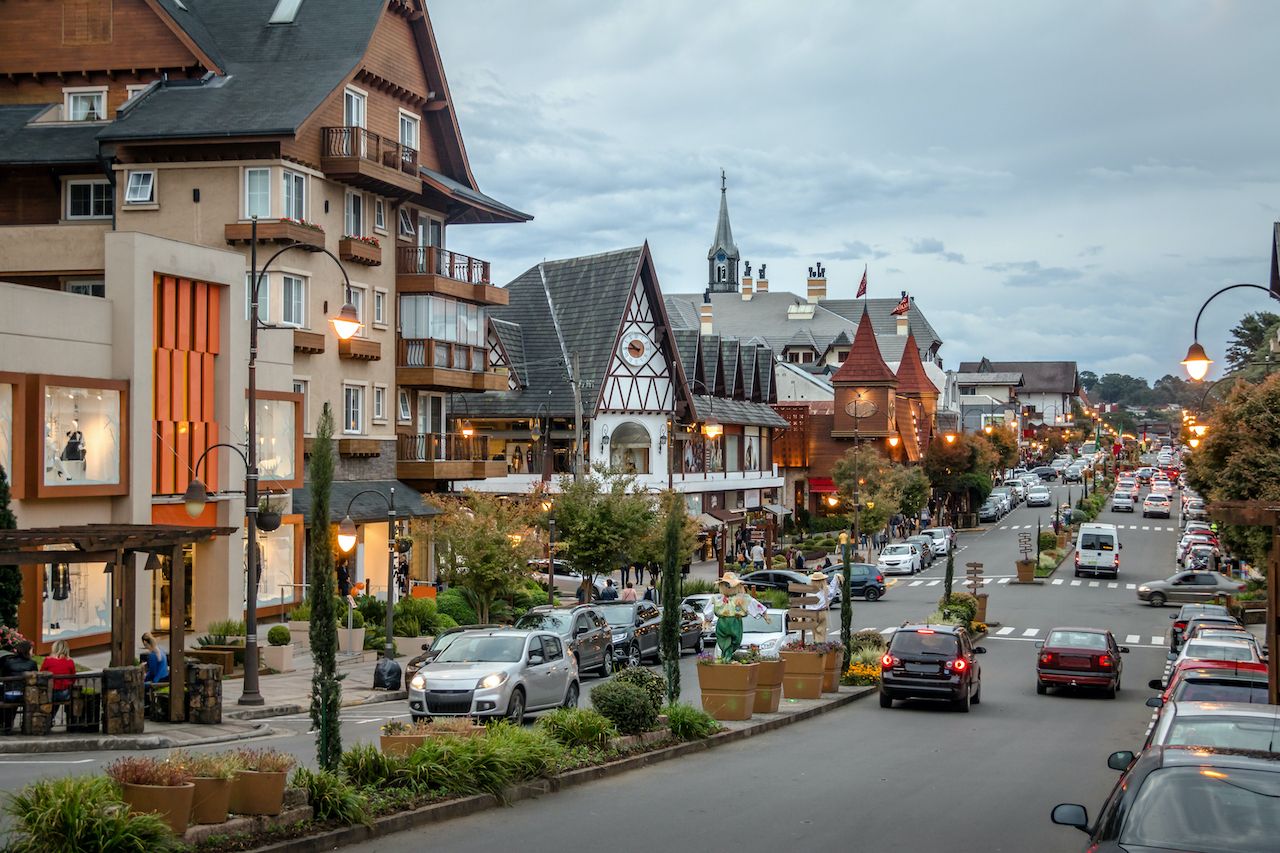 Brazil is a very diverse country, encompassing much more than immigrants from Portugal and the Indigenous people they encountered. Five million people were brought against their will from Africa to Brazil’s northeast or the states of Minas Gerais and Rio de Janeiro. Immigrants from Italy, Lebanon, and Japan were among those who went to São Paulo a century ago. And beginning in the late 1800s, German immigrants went to Brazil’s cooler, southern regions.

In Brazil’s southernmost state, in the Serra Gaúcha mountains, the town Gramado looks like a Bavarian village. It’s popular with tourists who come for its displays of Christmas lights, which feel somewhat incongruous in the height of the southern hemisphere summer, as well as locally brewed beer and housemade chocolates. 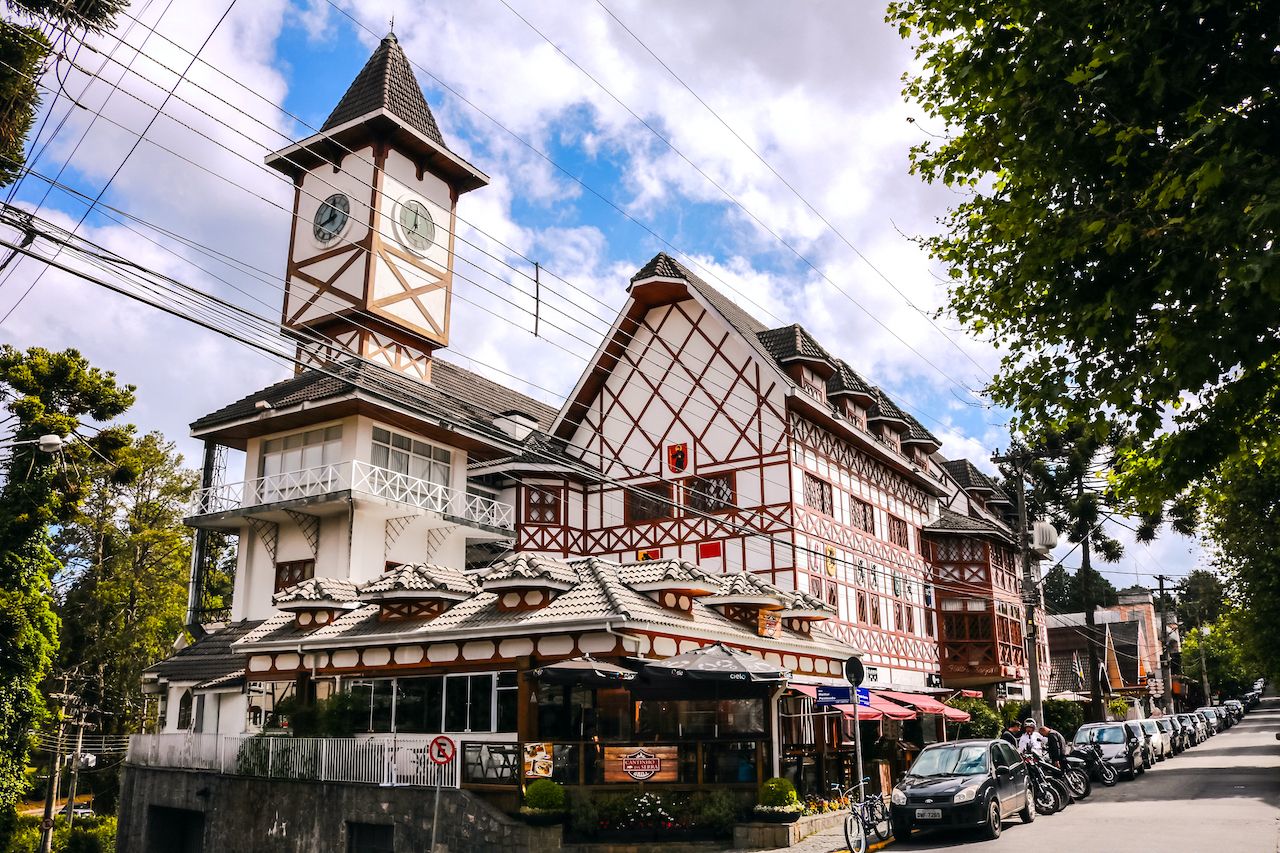 For people who can’t get as far as Rio Grande do Sul, a day trip from São Paulo also offers a glimpse into Brazil’s German heritage. Brazilians who come for a visit appreciate the German architecture, some of which seems too perfect to be a real town — unless you’ve been to similar small towns in Germany and you know it’s possible. Visitors from afar will be impressed with the juxtaposition of said Germanic architecture and the semi-tropical mountain landscape. So after washing down your bratwurst with a rich golden lager, go for some hikes in the area. Take in the waterfalls, the rock formations, and the lush green views.

Food + DrinkBahia Is the Best Place To Eat in Brazil. Here Are 9 Dishes That Prove It.
Tagged
Art + Architecture Brazil
What did you think of this story?
Meh
Good
Awesome