If you’re tempted to pack your bags and move to greener pastures, you’ll want to take a good look at where you can afford to go before you hit the road. Property Shark, a website that provides and interprets real estate data, recently published a report of the most expensive zip codes in the United States in 2021. As you can probably guess, if you’re on a tight budget, then California is not the place you want to move to right now.

Out of the top 100 most expensive zip codes in the US, 70 percent are in California, with the town of Atherton, in the Bay Area in between Mountain View and San Mateo, and its roughly 7,000 inhabitants leading the way.

To build a ranking of the most expensive zip codes in the US, Property Shark calculated the median home sale prices for each zip code and selected the top 100. (The list actually includes 127 zip codes but there were many ties.) 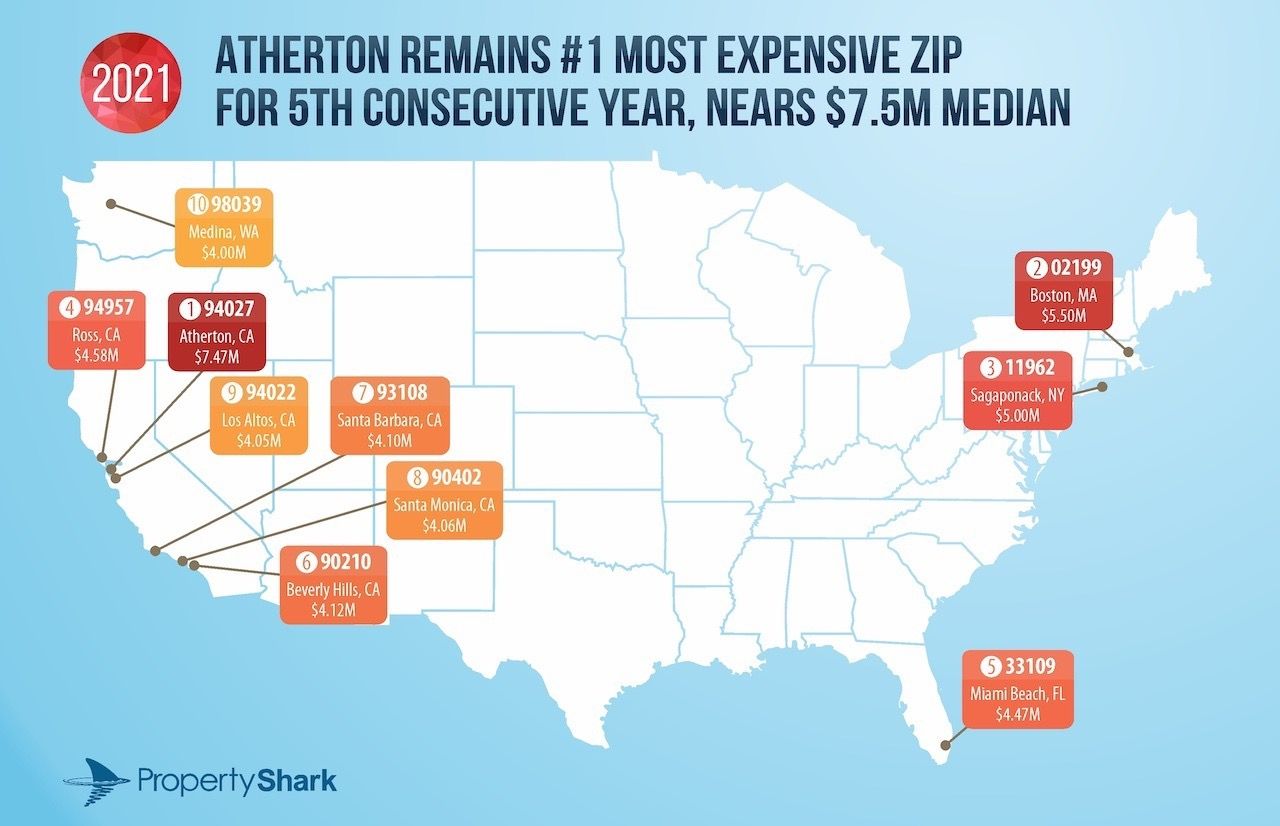 But Atherton is only one of 89 Californian zip codes that made the top 100. The Bay Area has 47 of them, and Los Angeles County has 21. Living in the sun is gonna cost you, apparently.

Although living in New York City is always referred to as a drain on the wallet, home prices don’t compare to what urban Californians have to deal with. No New York City county cracks the top 20, with the first appearance in the ranking at number 22 in the zip code that includes Hudson Yards and Little Italy. The state of New York as a whole is home to 17 of the most expensive zip codes in the US. 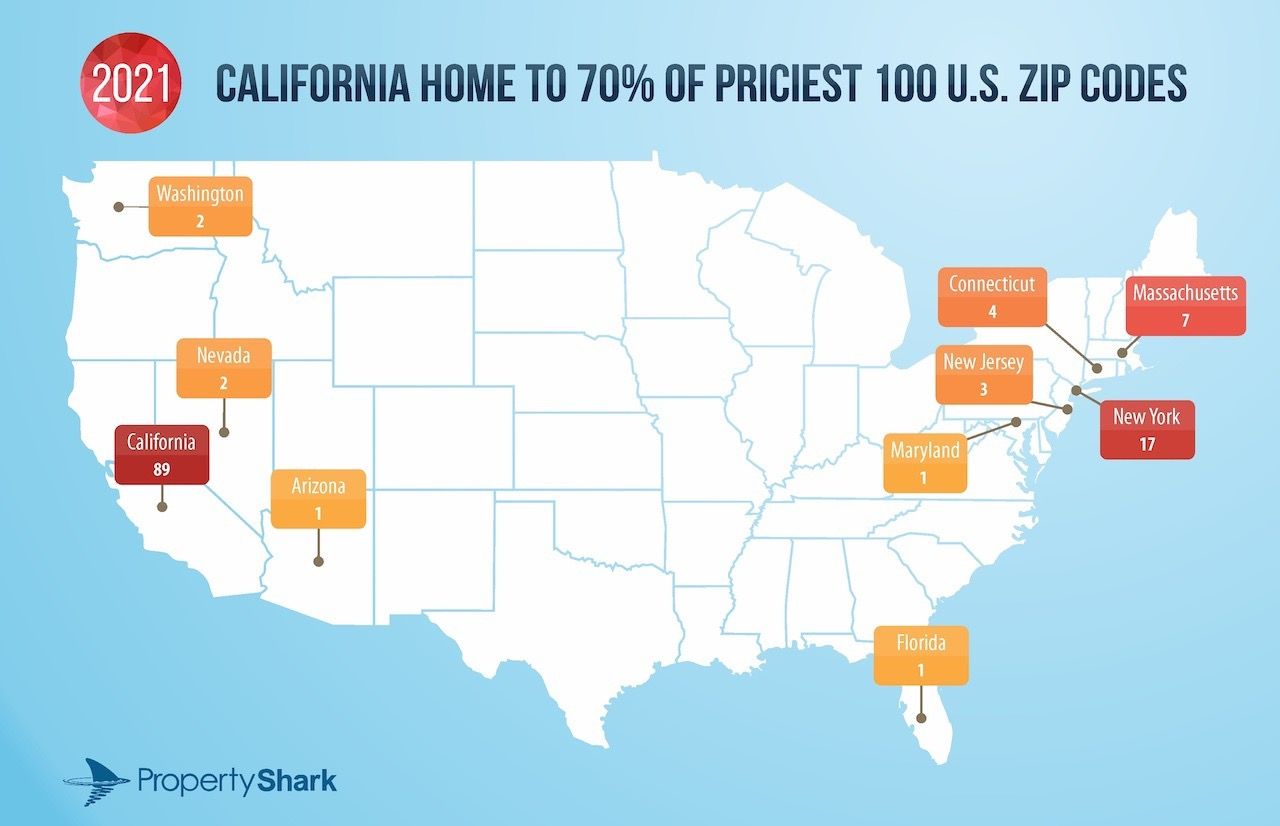 Three locations saw median home sale prices surge dramatically in the past year. Gibson Island, Maryland, had a 97 percent increase to reach an eye-watering $3,195,000 average, taking the 23rd spot; Crystal Bay, Nevada, rose by 68 percent to take the 39th spot; and Miami Beach increased by 66 percent to became the fifth most expensive zip code in the US in 2021. On the other side of the trend, the median home sale prices in Greenbrae, California, and in one small area of New York City’s Upper West Side by the water decreased by 39 percent. 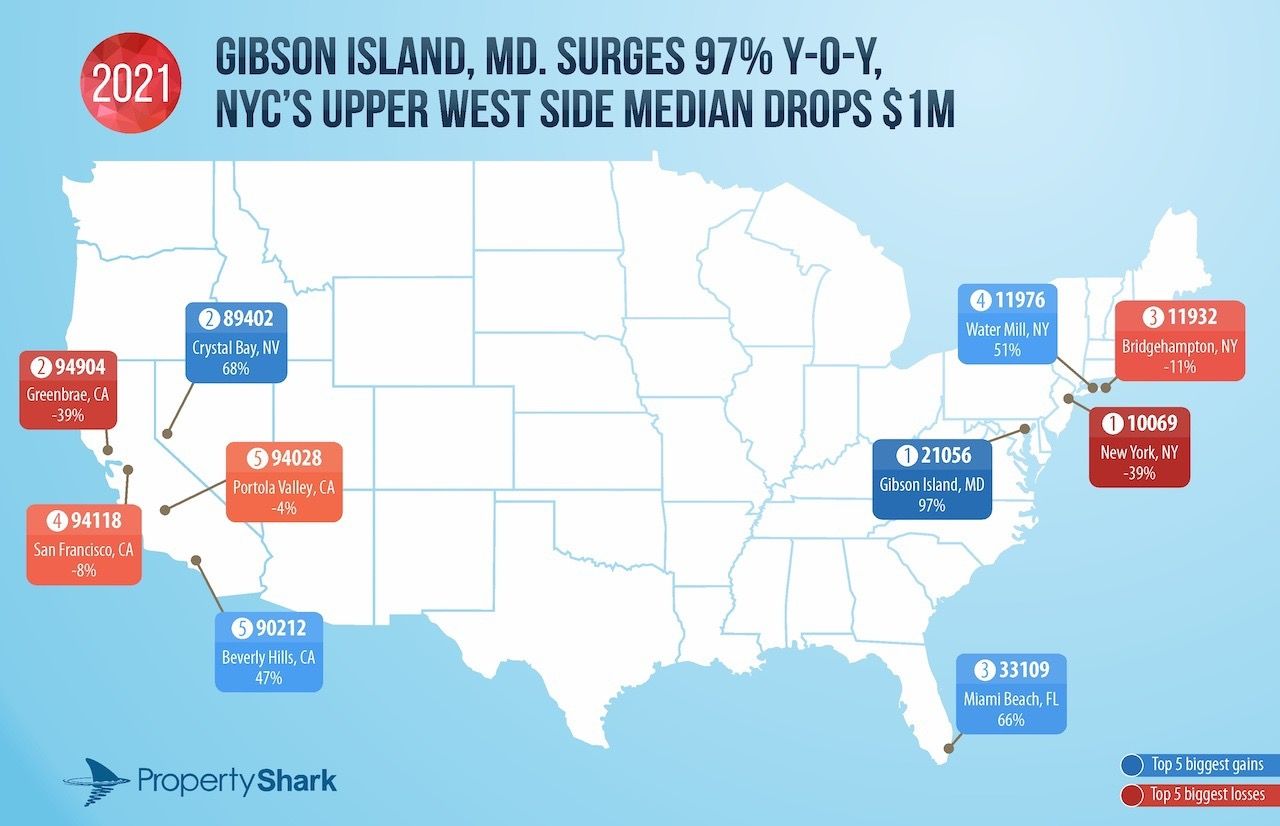 The 20 most expensive zip codes in the United States:

If those numbers have discouraged you from finding a spot in the sun and you’re thinking about leaving the US altogether, don’t forget to check the most expensive cities in the world for expats.

NewsVideo Compares What a $1 Million Home Looks Like in 15 Cities Across the US
Tagged
Maps + Infographics News
What did you think of this story?
Meh
Good
Awesome