Picture this: You’re cruising through the Himalayan high country, winding around tight mountain roads and crossing frosted rivers. Your fingers are gripping the handlebars, and a brisk wind is blowing, but you can’t help smiling and yelling “WHOOO!” This is a typical day on the Ride The Himalayas tour, a 15-day motorbike ride from the Indian city of New Delhi into the Himalayan high country that takes place three times each summer.

Ride The Himalayas founder and lead guide Rahul Yadav, a software engineer by trade, and his team take visitors on the ride of their lives through some of the highest roads in the world, visiting everything from lakes to monasteries along the way. It’s a challenging adventure and the most epic way to see the Himalayas. Equally important, it’s all-inclusive — all you have to do is sign up, show up, and try to quell that fear of heights. 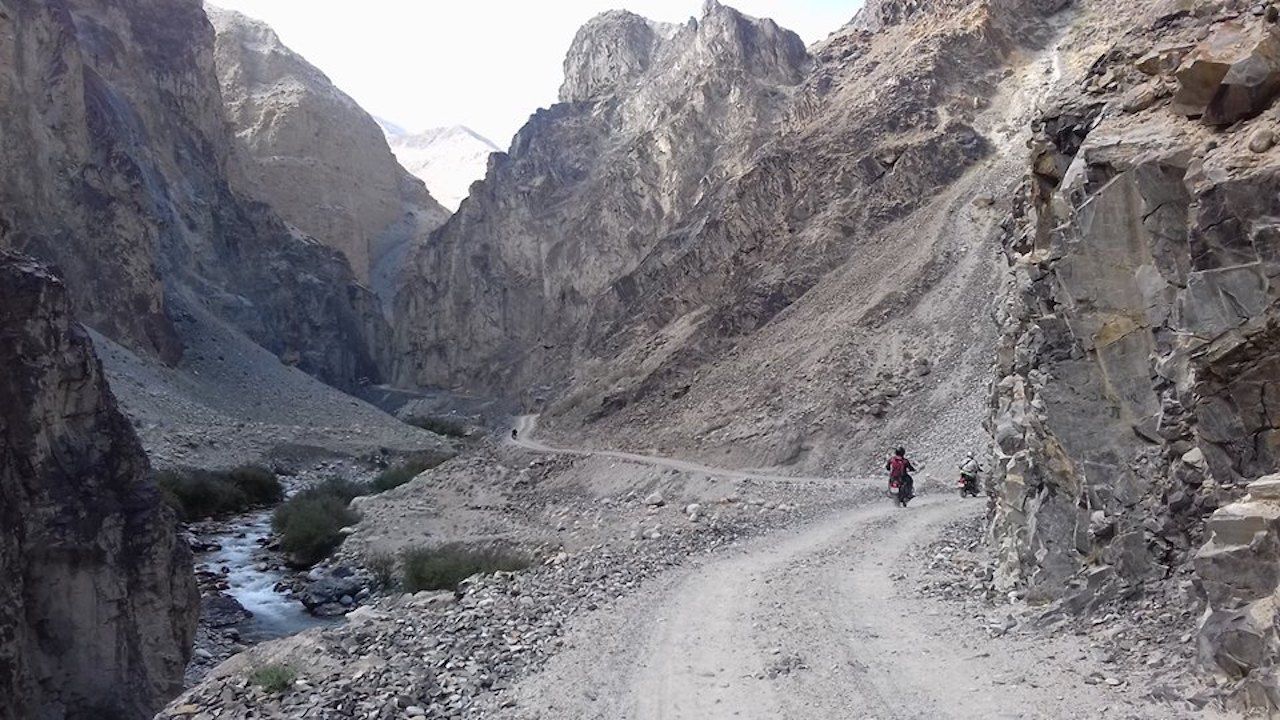 Get ready to see the world’s highest mountains from, well, high up in them. This two-week-plus journey covers over 1,400 miles from New Delhi into the high Himalayas, finishing in the Kashmiri town of Leh. The summit of the journey lands riders atop the highest motorable highway in the world, known as Khardung La, and offers vistas as breathtaking as the fear-smashing ride it took to get there. Most days cover 100 miles, sometimes slightly more. Nights are spent camping, which means that every morning you’ll wake up to what is likely to be the best view of your life.

Departing from New Delhi, the first leg is in warm weather and flatter than the mountain passes, giving you time to get your bearings on the bike. There’s no need to be an expert rider when you show up. The guides walk you through the basics of motorbiking, and there are a few days of easier riding before the harder stuff. You then pass through the Spiti Valley and Manali-Leh Highway up to Khardung La on a trip designed to be both an outdoors adventure and a sightseeing journey.

You’ll cover most major tourist attractions along the way, including Pangong Lake, Tso Moriri Lake, Hunder Sand Dunes, and the Nubra Valley, along with the town of Diskit and a number of major Himalayan monasteries. Landscape-wise, the trip passes through lush green mountains and forests, barren mountain ranges, and the world’s coldest desert. In addition to being the most epic way to see the Himalayas, it’s also a test of your abilities to layer clothing and pack efficiently. Snow-packed roads make it a challenging ride at times — but, hey, that’s what the durable motorbikes are for. 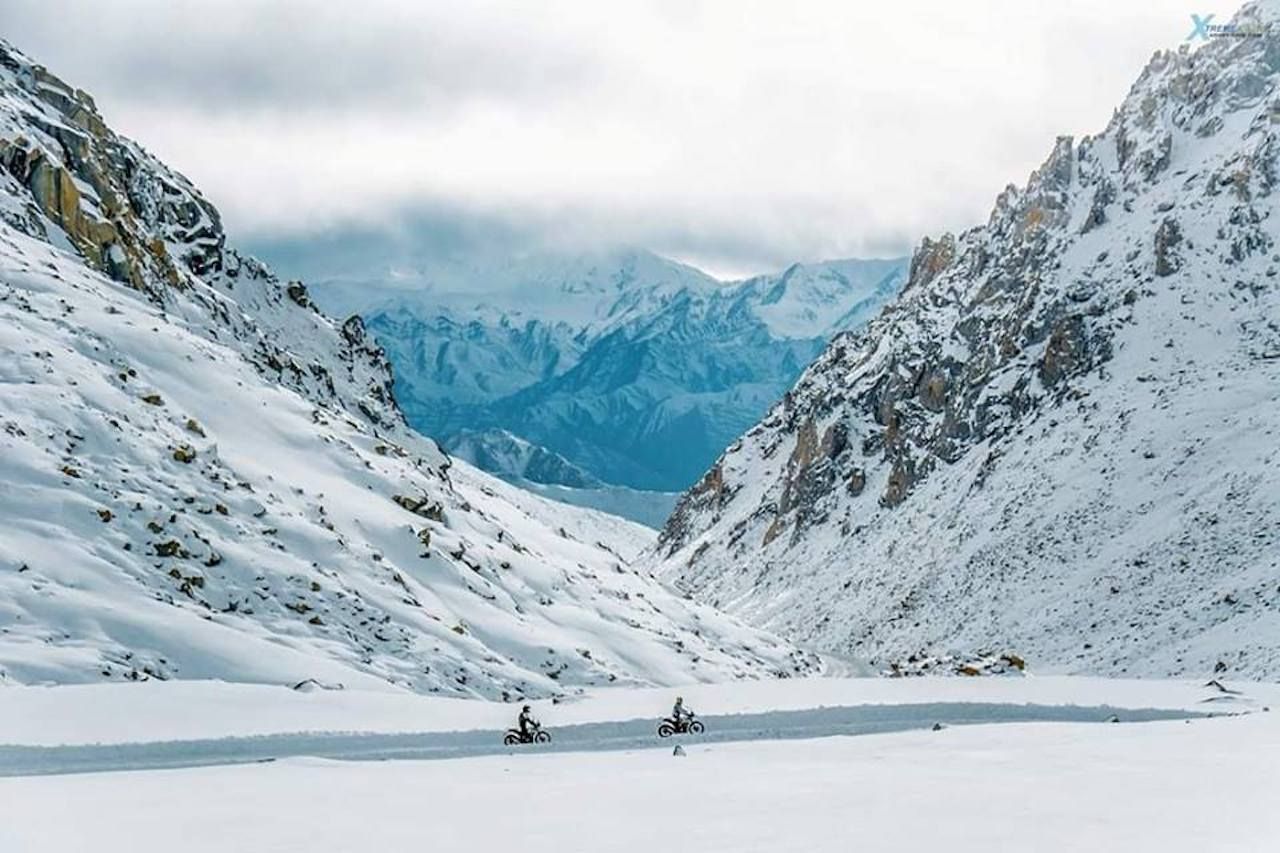 If you’ve trekked to Macchu Picchu or done an organized backpacking trip elsewhere in the Himalayas, many of the basics are similar — aside from the fact that you’re on an off-road motorcycle instead of walking. A support staff accompanies the tour and prepares meals for the riders, and all of your lodging is taken care of. Trips run three times over the summer months. This year, departures happen June 3, July 8, and September 9, arriving in Leh approximately 15 days later. Because of weather and sightseeing, you should allow a maximum of 18 days for the journey as delays do sometimes happen. You may end up with a couple nights in Leh at the end, which you can use as the perfect opportunity to devour more momos (dumplings) and dal.

Book flights into and out of New Delhi. The tour operator will greet you at the airport and escort you throughout your stay. Depending on weather and other arrivals, you may stay a night or two in the city before departure. Be prepared for inclement weather; it’s the Himalaya, after all. Wind and snow are common, especially at higher elevations, and even though it’s summer, the daytime temperatures are likely to dip below freezing. Additionally, you’ll need a one-way flight from Leh back to New Delhi on the far end of the trip.

For riding gear, you are responsible for providing a riding jacket, kneecaps, gloves, and riding boots. These items can be rented or purchased in New Delhi or brought with you from home. The tour operator provides a helmet. Also, you rent one of the five different models of bike to ride on the trip from them directly. Backpacking gear is a good thing to bring, as well. A support staff accompanies the journey, including a mechanic with necessary tools and spares parts. The most staggering fact about this tour is the low cost. Bike rental, tour, food, and camping equipment and accommodations run in the ballpark of $2,850 per person. “This is a nonprofit initiative because we only charge the cost incurred to our members in managing the arrangement,” said Rahul.

Bookings can be made solo or in groups though no more than 15 riders are allowed on one trip. Five different motorbikes are available for rent. The two most popular, and most appropriate for the journey according to Rahul, are the Royal Enfield Classic 500 and Royal Enfield Himalayan. “The Himalayan is considered to be the best for the Himalayas, and it’s quite unique to ride,” Rahul said. If you head out with Rahul and his crew this year, along for the ride will be riders from Australia, Luxembourg, Canada, Finland, and the US. “People join us from across the globe every year. I just do it for my passion to be happy and to make others happy.”

What to know before you go 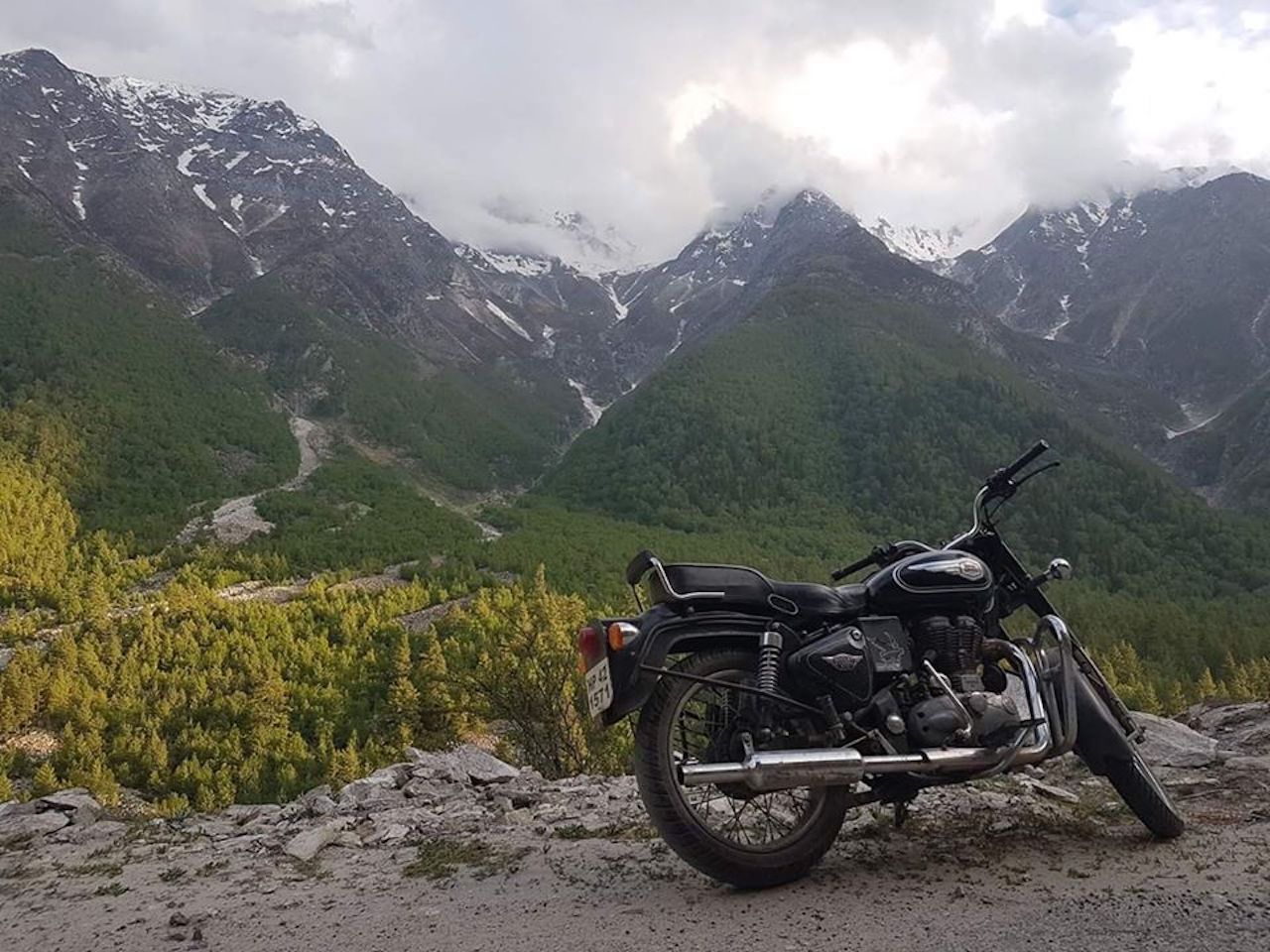 First off, it’s important to understand where you’re going. While much of the trip is spent in the alpine, the end point of Leh is in the region of Jammu and Kashmir, an Indian state in the far north of the country. It’s generally safe, but you should be aware that for over 70 years Kashmir has been a centerpoint for near constant dispute between India and Pakistan with a bit of weight thrown around by China, as well. Local people are known to be quite friendly, and while you’re unlikely to be caught up in any political turmoil during your trip, you should have at least a basic understanding of what’s happened and why.

Another thing to remember is that a trip like this requires flexibility and an open mind. Mother nature may not always agree with the day’s plan. On top of that, you’re stuck with a group of people you’ve never met for over two weeks. Rahul emphasizes the importance of bringing a positive attitude and willingness to be malleable to the tour. He asks riders to be travelers, not tourists, and be open to trying new things. For further information and to contact Rahul Yadav, email expedition@ridethehimalayas.com or visit the tour’s Facebook page.

Female TravelThis UK Traveler Is Following in the Footsteps of a Legendary Explorer To Raise Awareness for Female Travel
Tagged
Road Trips Trip Planning India
What did you think of this story?
Meh
Good
Awesome