In 1929, a developer from Vernal, Utah, named Bus Hatch guided a flat-bottomed boat down a protected stretch of the nearby Green River. His aim was to take guests through Dinosaur National Monument in western Colorado and eastern Utah, exploring the canyons and conquering the rapids that had proved fierce enough to compromise the integrity of the canoes that had previously run the river. Hatch didn’t know it then, but he was about to change river running forever.

Though flat-bottomed wooden boats had been used for military purposes since the 1700s, Hatch is credited by many with inventing what would become the modern raft, albeit in wooden form, and being the first to push off the river banks of the Green for leisure. Hatch became the first “river rat,” and commercial river rafting as we know it today was born. Hatch River Expeditions became the first licensed river outfitter in the United States.

After many years of successful commercial guiding around the world, Bus Hatch passed away in 1967. Don Hatch River Expeditions, run by his son, became part of California-based expedition outfitter OARS in 2007. In mid-August, my wife Alisha and I joined OARS for a three-day run on the Green River through the Gates of Lodore inside the monument. It was our first overnight rafting trip and a chance to retrace where it all started. If adding more river time to your list of outdoor hobbies is the goal, as it was ours, a trip like this is the best way forward. You get the full experience — three days on the river, two nights of camping on its banks — and the chance to completely disconnect from everything else.

For us, it proved easy to understand why Bus Hatch was so captivated by this area all those years ago.

Preparing and packing for an overnight raft trip 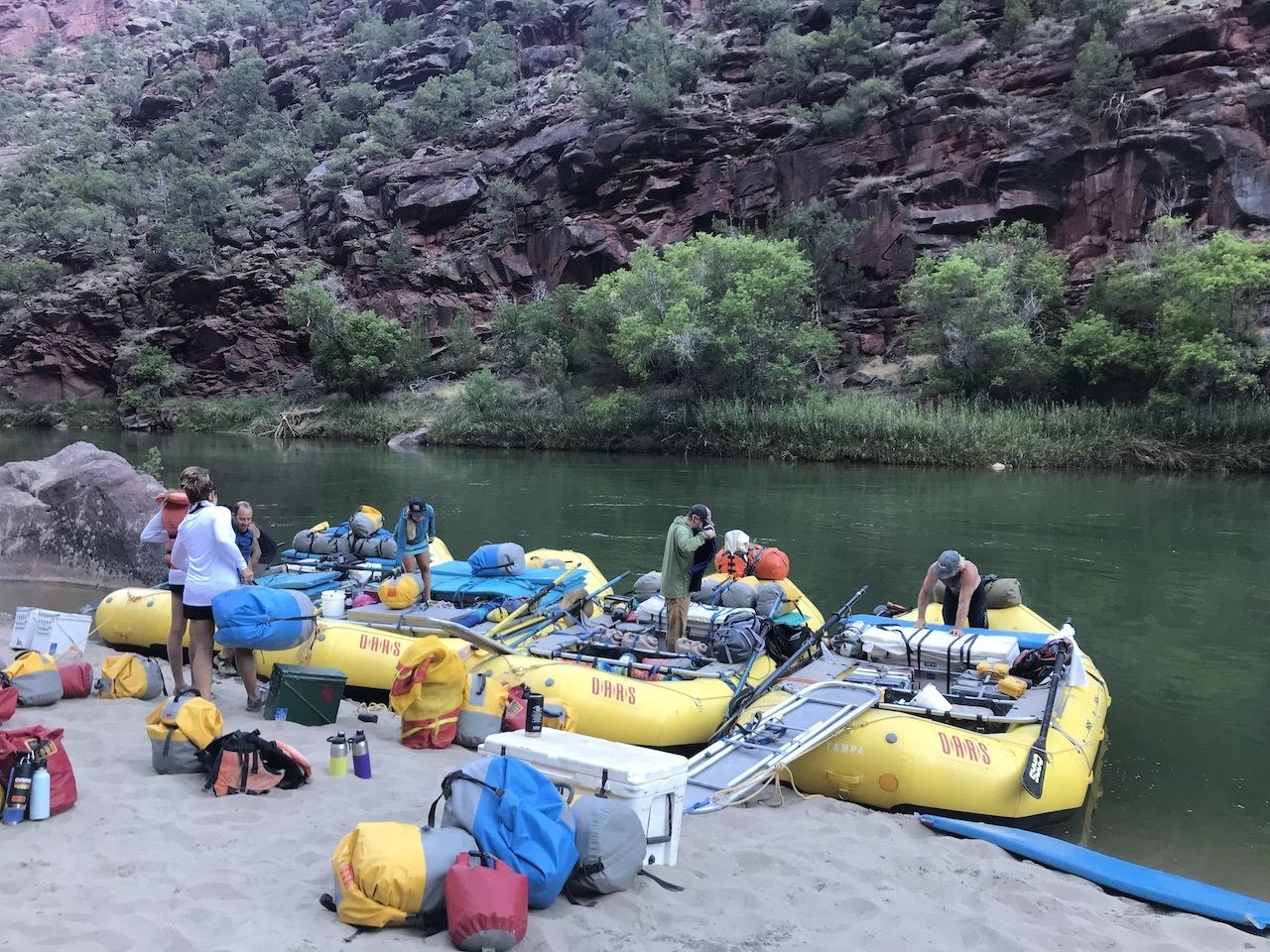 Our trip was to be both an epic backcountry experience and an expedition to test the waters, so to speak, for future river trips. We’d done multiple day trips on several rivers, both commercial and private, but we didn’t know if packrafting would be our thing. Did the fact that we’d recently moved from Denver to the river-crazed Grand Valley really mean we needed to become “river people”?

We chose OARS because of their reputation for properly led excursions and environmental conservation, both of which were front and center the entire trip. A three-day run through Gates of Lodore runs $899 per person, though most permitted stretches of river including the Green also allow for private river expeditions. If you opt to pull a private permit for any stretch of whitewater, proper planning and packing for the journey are essential. Of course, you’ll need a raft or kayak capable of withstanding Class IV rapids and the knowledge and experience to captain it. OARS offers rowing clinics to train prospective guides and private river runners on proper rowing techniques and river safety protocol. Though not required to pull a permit, professional training never hurts if you can afford the $1,599 price tag. At the very least, raft with an experienced captain on multiple day-trips, slowly increasing in difficulty, prior to attempting a multi-day expedition.

Additionally, you and everyone in your party need a PFD, which stands for personal flotation device and really means “life vest,” a helmet, and plenty of water. (It doesn’t hurt to bring a water filter in case your supply runs low.) Two to three water jugs holding at least seven gallons for each raft should do it — remember, you’ll need water for drinking as well as for hygiene and cooking. On our commercial expedition, the guides brought propane cylinders and a packable gas grill to whip up steaks, potatoes, and stir fry for dinners and eggs for hot breakfast in the mornings. Such luxury isn’t mandatory, however. If you’re heading out for just a night or two and don’t mind quick meals, you can get by on canned tuna or chicken salad, PB&J, and a plethora of energy bars and other goodies. Anything that can be stored in a cooler and wrapped in a tortilla is also a strong option. 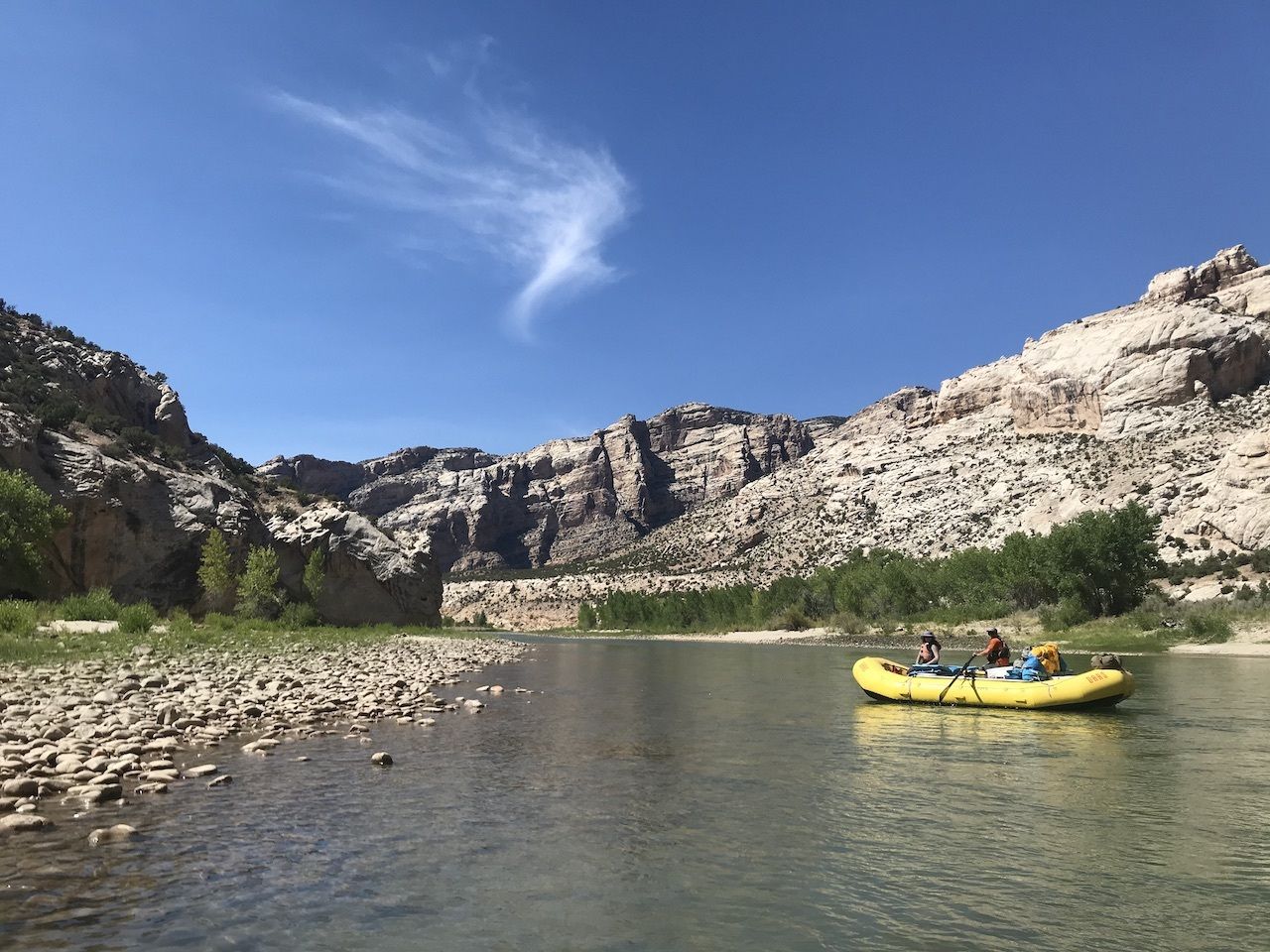 Packaged campfire meals are ideal for trips like this. My favorite option for quick morning meals are Brave breakfasts, nutrient-packed oatmeal pouches that you mix with any type of milk the night before and let mesh overnight, or quickly heat up on a camp stove before pushing off.

And for the elephant on the raft. The natural cycles of the human body don’t stop just because there isn’t a formal restroom available. On a multi-day raft trip you’ll become familiar with what’s called a “Groover” — basically, a metal poop container with a plastic toilet seat on top that you’ll have to lug with you on the raft. The groover takes its name from the days before they actually put toilet seats on the metal box, which left marks on your tush when you sat on it. Yes, that was TMI, but the principles of “Leave No Trace” are sometimes more pungent than pretty. You gotta do what you gotta do out there. 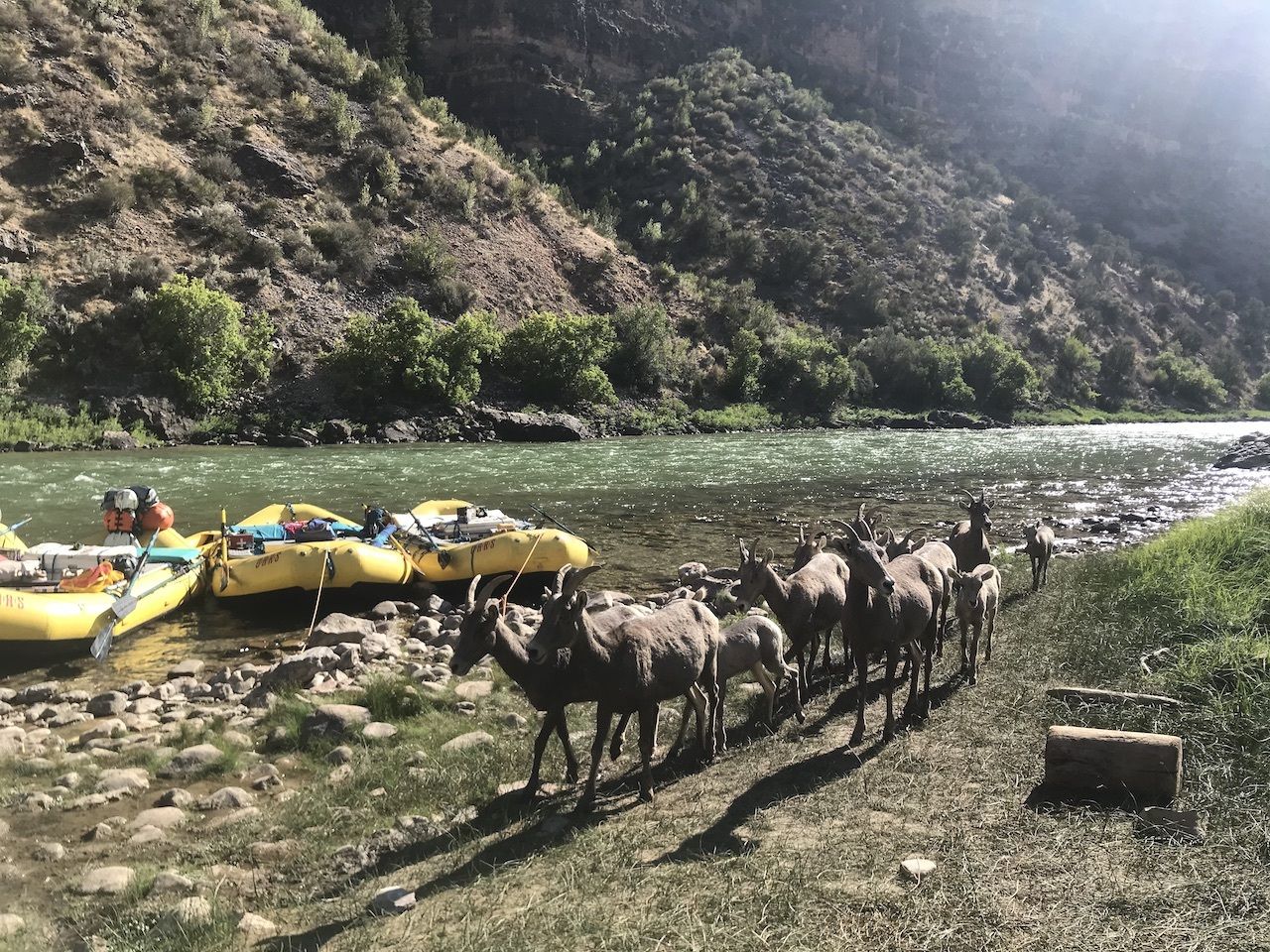 Matador’s backpacking gear guide offers guidance on selecting overnight gear, but these are the essentials: a tent, a sleeping bag and ground pad, and warm clothes for the evenings because even the desert cools off at night. You’ll also need a few large dry bags to store everything on the boat while moving down the river and to store food and belongings at camp. Food storage was a necessity on this trip, as we set our first camp alongside a small herd of bighorn sheep camping alongside the river. I hoped our presence didn’t disturb them, though with more than a century of protection, the animals in Dinosaur National Monument are quite trusting of humans. We awoke in the morning to find them not far from where we’d last seen the herd the night before.

Beyond the ability to relax, the biggest perk of river running with a commercial outfitter proved to be their sheer knowledge of both what you’re doing and where you’re doing it. Our guides were meticulously detailed, sharing knowhow of the preparation, execution, and traditions of the river. The guides also offered a nearly overwhelming amount of geographical knowledge of the surrounding canyons and river basin. After covering about 15 miles on the water and setting up camp on night two, we embarked on a four-mile hike to check out a series of petroglyphs and pictographs left in canyon walls by the Fremont people who inhabited the area more than 1,000 years ago. 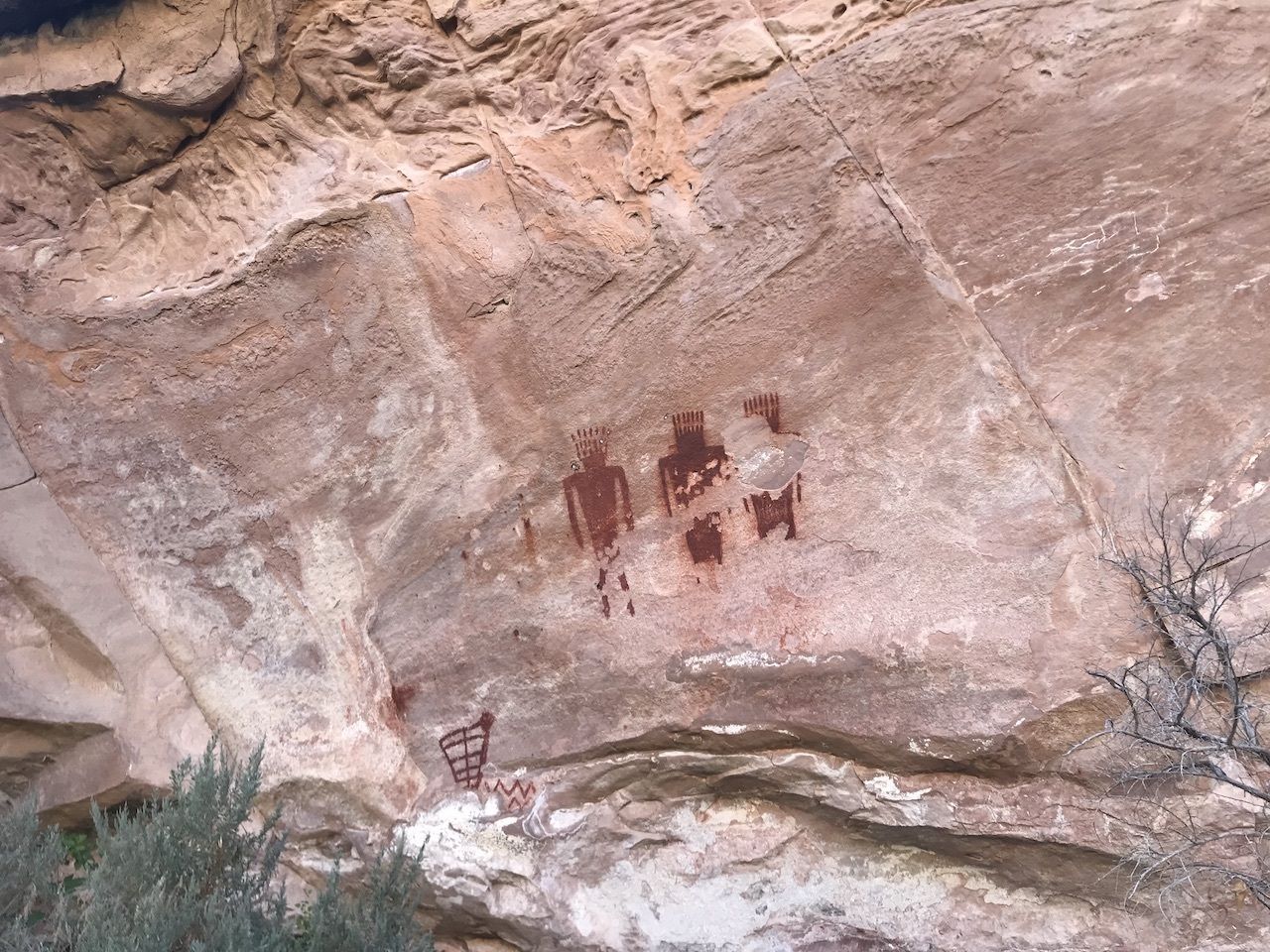 That intel isn’t used only to impress paying guests. The early days of Hatch’s river expeditions carried geologists, hunters, fishermen, and others with a vested interest in conservation. This only increased as Hatch expanded his guiding services west to the Colorado and Salmon rivers.

But it all came to head in the 1950’s when two dams were proposed on the Green, intending to flood Dinosaur National Monument. The ensuing battle against the dams would become known as the Battle for Echo Park, pitting conservationists including Hatch against builders. Through efforts led by the Sierra Club’s David Brower, grassroots lobbying action, and a good deal of trips down the Green River to raise awareness, the two dams were defeated.

This wasn’t the case on the Colorado River, currently the most heavily dammed river system in the world, or many others across the west. Still, the tradition of activism continues today. OARS fights for the protection of rivers across the American west, mostly by taking people down them. Exploitative minds need only experience this serenity once to be opened to its magnificence. Indeed, it would be morally impossible to experience a river as sacred as the Green or Yampa and not feel an urgent need to protect it — for recreation, for future generations, and for the flora and fauna that depend on its wild flow. Whether you travel with an outfitter such as OARS or pull your own permit to raft a protected stretch of water, you’re not just taking an epic trip. Your dollars also become a voice for river conservation.

The emerald hue of the Green River shone brightly in the sun on day three as we took out at Split Mountain to head back to Vernal, reflecting the infinite value of those that have fought to protect it. A budding passion for the river burned brightly within us as well. After the spring and summer of 2020, spending three days staring at red rock canyons, the pancake-like rocks of the Lodore formation towering above us, and nothing in front but rampant whitewater was exactly what we needed.