Death is an ever-present aspect of New Orleans culture. Second lines, the jubilant parties where folks dance down the street while a brass band jams, are synonymous with the city. These celebrations stem from an African-American funeral ritual in honor of a deceased member of the community. At the same time, cemetery tours are among the most popular attractions in NOLA. Before COVID-19, an estimated 200,000 people visited the St. Louis #1 Cemetery in the French Quarter each year. It houses the tomb of Marie Laveau, the “Voodoo Queen of New Orleans,” making it a pilgrimage to those interested in the supernatural. Ghost tours are another ubiquitous tourist activity, focusing on everything from haunted hotels to vampire lore. So it only makes sense that the city is home to the macabre Museum of Death.

“It’s definitely a big draw for especially the true crime, serial killer crowd but we offer so much more than that,” explained Zach Frazier, Manager of the New Orleans location of the Museum of Death (there’s another one in Hollywood). “It’s not just in that vein, we cover everything related to death.”

There’s taxidermy, serial killer paraphernalia, and photos of beheadings. But there’s also a section explaining the logistics of embalming a corpse, and one that highlights the sensationalization of murder by the press.

The Museum of Death is morbid so true crime fans and lovers of the occult will undoubtedly connect with the content. But if you’re just a curious traveler that enjoys museums and learning, you can certainly appreciate the experience. Here’s all of the intel you need to make the most of your visit to the New Orleans Museum of Death.

Where is the Museum of Death? 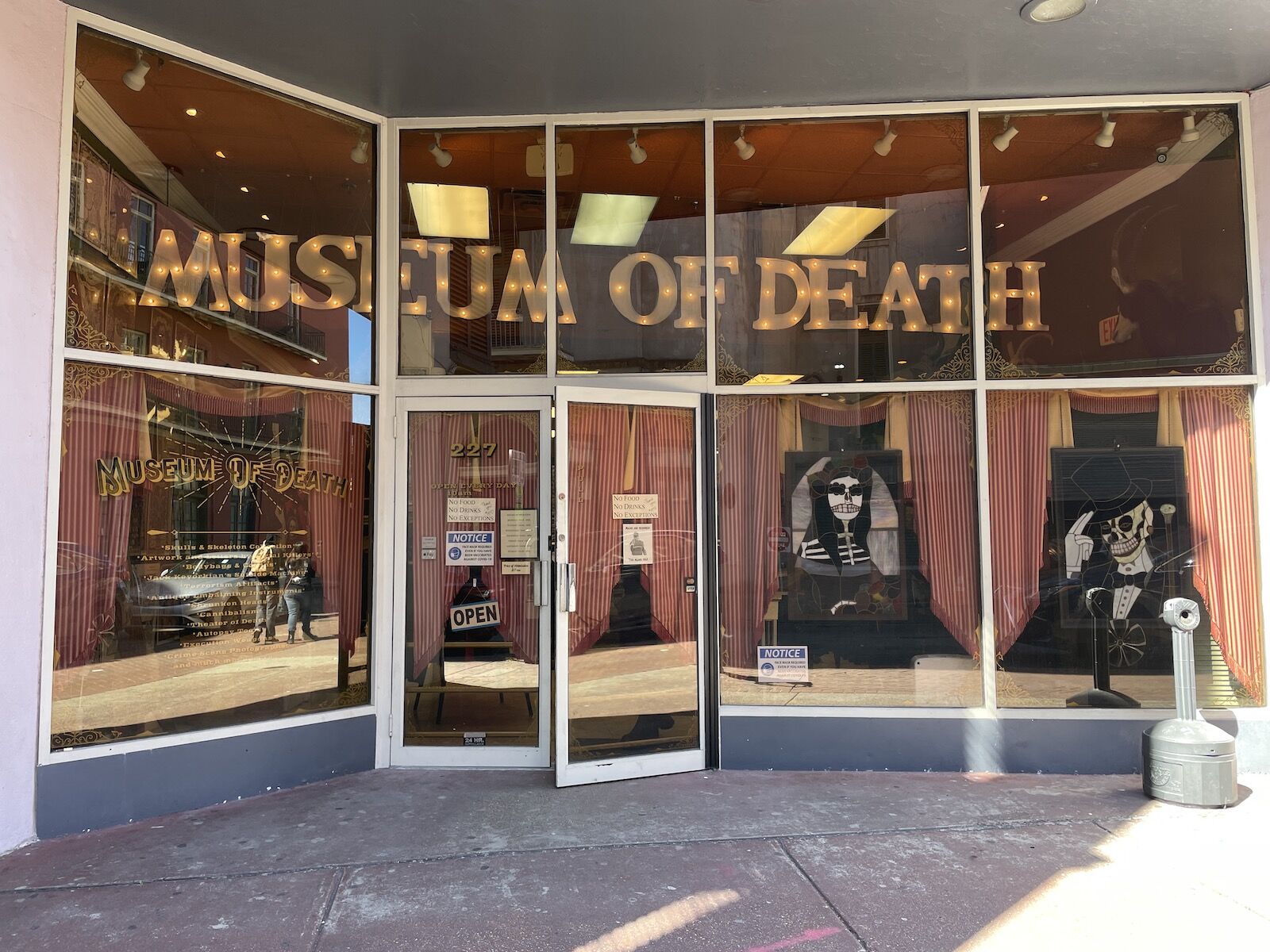 The Museum of Death is located at 227 Dauphine Street between Bienville and Iberville streets in the French Quarter. It’s on a block with quintessential New Orleans businesses like a po’boy sandwich shop and a costume shop. It’s a short walk from the Canal Street streetcar (#47 and #48), or most hotels in the Quarter, and even the Central Business District (CBD).

There are numerous bus lines that also stop on nearby Canal Street (#32, #60, #90). But ride sharing or the Canal Street streetcar are the best options to get to the museum, especially on the weekends because street parking can be sparse and parking in a lot can be expensive.

When is the best time to visit the Museum of Death in New Orleans?

The New Orleans Museum of Death is open every day, Monday through Sunday from 11 AM until 6 PM. It is closed on Thanksgiving Day, Christmas Day, and of course Mardi Gras Day (which changes every year so check the calendar!).

“Halloween is one of our biggest seasons, definitely one of the biggest weekends of the year,” offers Frazier. “Weekends especially during Mardi Gras season are packed.”

But all throughout the year, lines can be down the block on Saturdays and Sundays which means a wait to get in and then more crowds inside. Frazier suggests going early on a weekday, especially Monday through Wednesday during slower tourism months (May through November), to have space to walk around the exhibits and time to watch the videos and look closely at the artifacts.

“During the week, there won’t be a line, you’ll get right in without it being crowded in there. You can see everything you want and take your time and don’t have to worry about it being congested and the flow,” noted Frazier. “Also if you have any questions, you get more one-on-one time with us. That’s also important for a lot of folks because if it’s busy we’re not going to be able to have a conversation to talk about any of this stuff.”

What you need to know before visiting the Museum of Death

The New Orleans Museum of Death displays potentially disturbing content, including grisly photos of autopsies, and crime scenes, for example. If you’re squeamish, pass your way.

“I let people know that it can be graphic on the inside. That is something that is important especially if they want to bring younger kids,” shared Frazier. “We don’t say no, we just want people to know before they come in.”

Also photography is prohibited inside the Museum of Death, so keep your phone in your pocket or bag.

The best Museum of Death exhibits

Frazier highly recommends spending some time at the Kevorkian Machine exhibit. Also known as “the Death Machine”, “the Suicide Machine” or “The Thanatron” (a Greek word for “Instrument of Death”), the Kevorkian machine is an apparatus created by Jack Kevorkian whose medical license was revoked after he assisted 130 patients to commit suicide. Kevorkian, nicknamed “Dr. Death” spent eight years in prison for second-degree murder. He was released in 2007 and passed away in 2011 at the age of 83. The Kevorkian Machine is a simple “automated drip hooked up to an intravenous needle,” WIRED explains. The New Orleans Museum of Death has the original Kevorkian Machine and the box it came in. Jack Kevorkian’s “60 Minutes” interview plays besides the display of the machine.

The funeral section is less sensational than some other exhibits, but it’s one we suggest you take the time to check out. The exhibit offers antique items like the Victorian mourning rings, embalming instruments, and mouth shapers that were used to beautify corpses. Lining the wall in that same section are embalming face casts of famous people such as Napoleon Bonaparte, Abraham Lincoln, and Robin Williams. This area also offers a break from some of the graphic content.

Also, make sure you peak into the Theater of Death to have a look at the gorgeous Day of The Dead altar. Setting up an altar in honor of your departed loved ones is a Mexican tradition that takes place yearly on November 1 and 2. Día de los Muertos is a time to acknowledge mortality, remember ancestors, and celebrate their memories. The altar at the museum is a colorful and ornate example that is worth taking the time to observe — it brings joy and levity to an intense space.

Do you have to be a certain age to go to the Museum of Death?

The Museum of Death does not impose any age restrictions. Access is open to anyone, no matter their age. However, the Museum of Death include extremely graphic images and themes that are not suited for a young or sensitive audience. Children are not allowed to access the museum or roam around the exhibits without parental supervision.

How much are tickets for the Museum of Death in New Orleans? 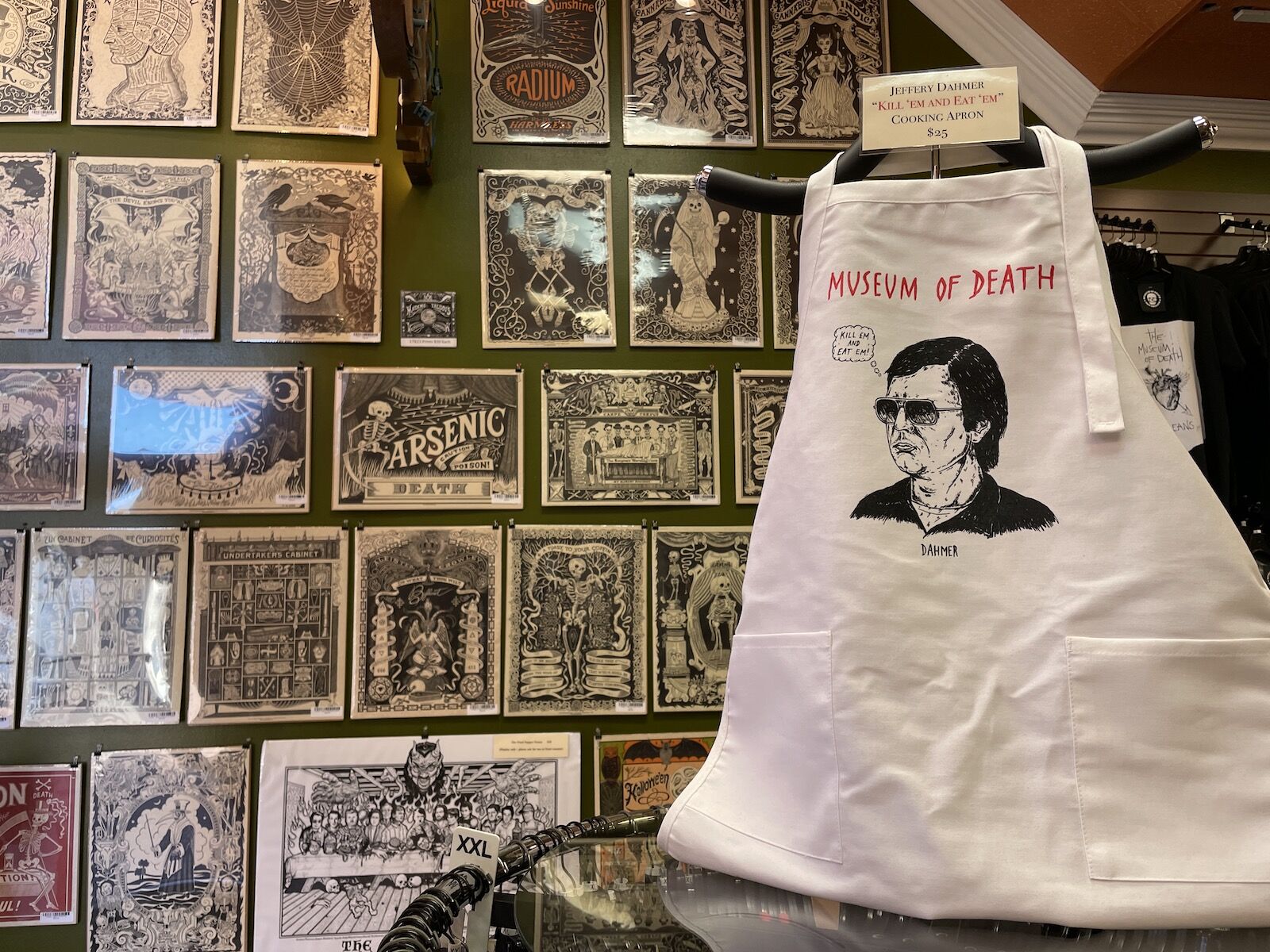 Admission for one adult costs $17 plus tax. You pay at the check-in counter located in the lobby and gift shop. The staff gives you a quick orientation of the museum and then you can start your self-guided tour. No timed entry and no buying tickets online. It’s first come, first served so get there early!

How long does it take to visit the Museum of Death?

While it’s a small space, there’s a lot of details to take in. Most visitors spend about an hour at the Museum of Death, but you can easily spend more time watching documentaries on the various screens throughout the museum. There’s also the Theater of Death, a mini movie theater in the back of the museum with rows of benches for visitors to watch true-crime videos. There’s a gift shop with some shirts, aprons, and other keepsakes so account for any shopping time in your trip planning.

There’s no one particular place to start your visit since the museum is so small. The first section when you enter is dedicated to taxidermy and skeletons while the exit is through the cannibalism exhibit. But you can basically choose your own adventure in between. The museum is set up like a gallery broken up into sections taking visitors along a U-shaped path.

Budget Travel17 Free or Cheap Activities in New Orleans and Tips for a Budget-Friendly Trip
Tagged
Museums New Orleans, LA, United States
What did you think of this story?
Meh
Good
Awesome