“Cop says we have to stop shooting over the river,” Jim Bob said glumly as he headed back over the Levee. The 12-year-old girl put her shotgun down and made a face like you’d told her she couldn’t have pizza for breakfast.

“Why not?” she pouted, opening the shotgun and taking out shells like a pro.

“Water’s too high,’” Jim Bob responded, pronouncing the last two words like it was some sort of made up excuse. “Sorry y’all we gotta pack up. Grab yer beers.”

The little girl wasn’t drinking, just so we’re clear. But the rest of us seemed to have no problems mixing cold beers and firearms. Nor did the state trooper who’d told us to stop. He was just concerned the river was moving too fast, and people could come up on us while we were shooting.

If this seems completely normal to you, then a trip to Natchez, Mississippi is nothing new. If, like many people, this whole scene seems completely foreign, then a trip to the deepest part of the Deep South will be a better cultural education than spending a week in Europe. Go ahead, scoff. But if it’s history, new experiences, and I-wouldn’t-do-this-at-home fun you’re looking for, you’ll find it atop the bluffs along the Mississippi River. 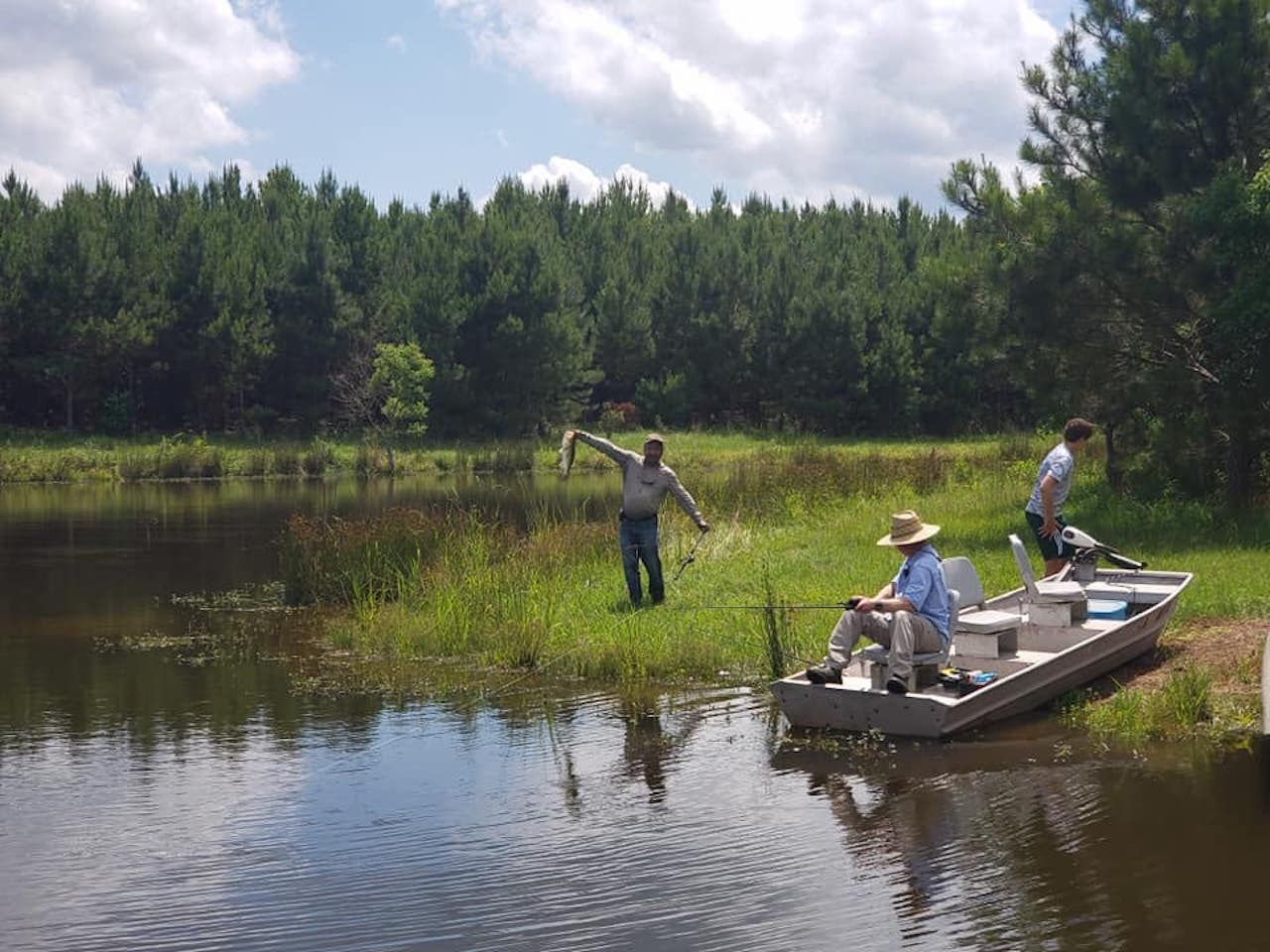 “This is how we do out in Natchez, Mississippi,” Jim Bob Allgood told me gleefully as we ordered Daiquiris in a line of cars at McDonough’s Package Store, across the river in Vidalia, Louisiana. He looks a little like Guy Fieri and Larry the Cable Guy had a love child and raised him in the swamps of Mississippi. A quick-witted character who keeps you laughing for hours. “Technically, it’s not an open container until you puncture that hole in the lid. Rednecks, we’re smarter than you think.”

His adventure tours are one of the biggest attractions in Natchez, a chance not only to shoot clay pigeons out over a moss-covered river but also do stuff like night fishing, catfishing (called “noodling” elsewhere), frog gigging, turkey hunting, and other stuff you’ve probably never tried before.

We spent the afternoon busting clays and downing beers, with the help of a couple of girls from the local soccer team he coaches and their parents. We finished the night at one of the families’ lakeside lodges singing songs by a fire and watching fish jump up out of the swelling lake. It’s the idyllic antithesis to city life, and in that moment, it seemed completely perfect.

There is something liberating about the redneck lifestyle Jim Bob sells. It sheds off all the rules and regulations we have to tiptoe around in big cities, allowing for some good, old-fashioned, borderline irresponsible, fun. It also helps you understand a little why in the Deep South, they don’t like other states telling them how to live. And if they want to drink and drive and fish and shoot, people in California and New York shouldn’t be the ones telling them not to.

That’s not to say you have to agree or disagree with anything that happens in Mississippi. But for non-Southerners, a trip here, to paraphrase Chris Rock, helps you understand. 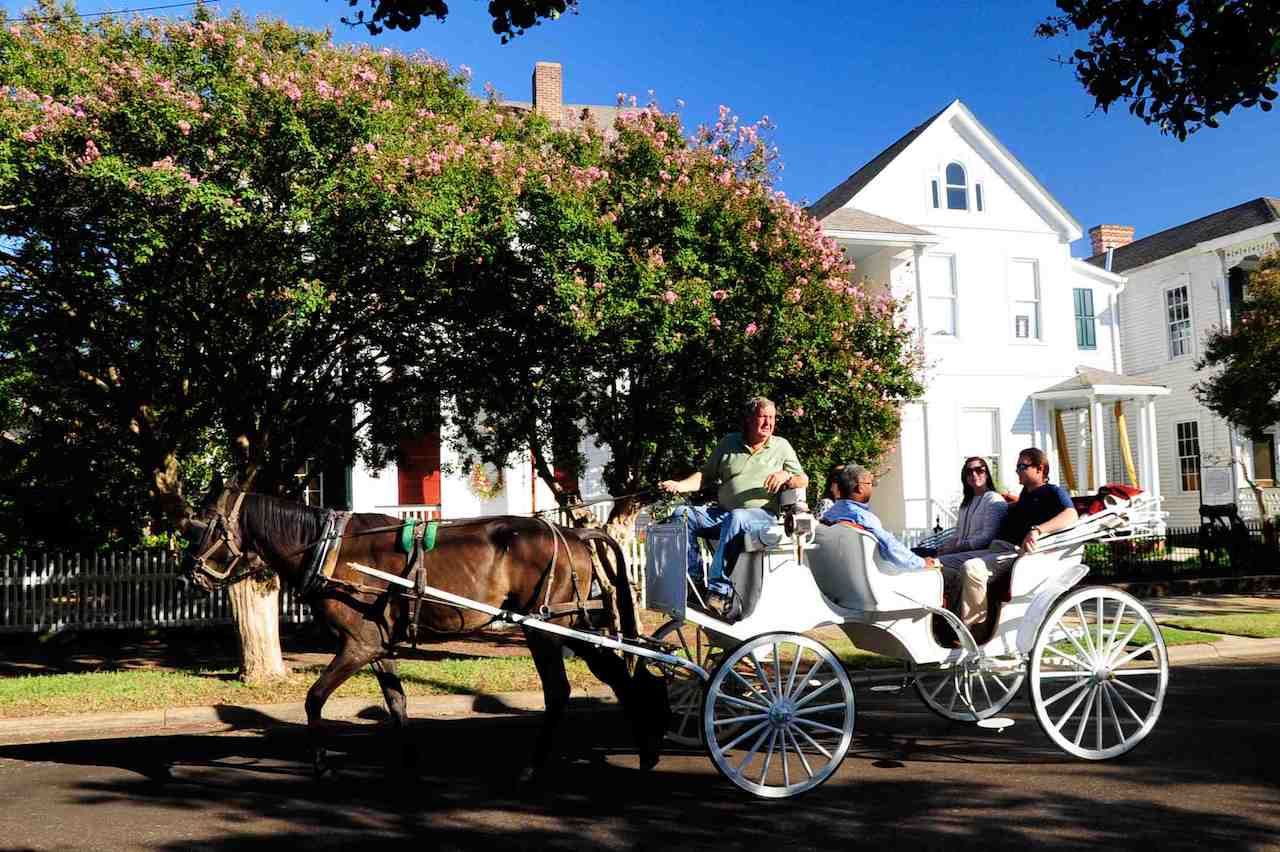 Natchez’s history is both beautiful and horrifically ugly. And it’s all out there on display

There is an urban legend that Franklin Street, one of the city’s main drags, isn’t named after Ben Franklin. In reality, the street is in fact named after the guy on the hundred dollar bill. But after taking the street out of town, to a dubious monument called Forks in the Road, one could see how there might be confusion.

A plaque at this grassy park across from some auto body shops tells the story of Isaac Franklin, one of the most prolific domestic slave traders of the 1800s. He brought slaves overland — often by foot — from Virginia and the Carolinas and sold them at a market that once stood on this site, mercilessly separating families and profiting off human trafficking.

“This road here?” Darrell White, the city’s director of cultural tourism, asked with that Southern rhetorical tone, while pointing to a street leading diagonally from the park. “That leads out to the Natchez Trace, that’s how they brought most of the enslaved people in. Ironically, it’s called Liberty Road.”

The history of Natchez isn’t glorious, but by visiting you will learn about huge parts of American history that are glossed over in high school history classes.

In school, we learn about the trans-Atlantic slave trade, but the brutal and dehumanizing domestic trade, brought about when trans-Atlantic trade was outlawed and America shifted its agricultural focus from tobacco to cotton, was just as evil. And, more alarmingly, was perpetrated by Americans. Natchez doesn’t hide from it, evidenced by the fact that one of the city’s most prominent landmarks was at one time a slave market.

Another thing people don’t know is that Natchez was a city of Union sympathizers. Not that the good people of Natchez had a moral opposition to slavery, mind you. But it was full of northern “entrepreneurs” who came to Mississippi to make money off cotton. And they knew war with the North would be bad for business. 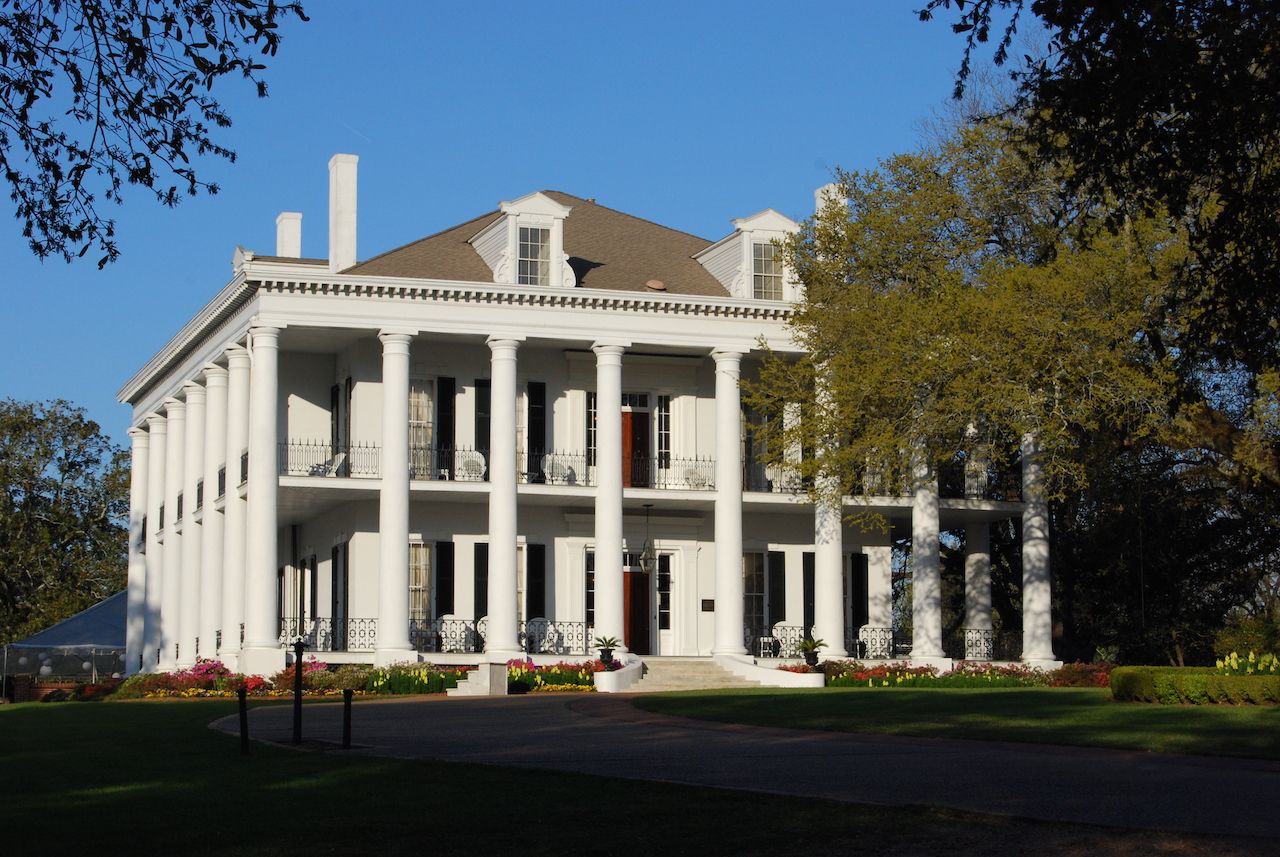 So when the Union came through town, instead of torching the plantation owners’ city mansions like they did in the rest of the South, the grand homes in Natchez were left standing. The historic result is homes like Linden, a bed and breakfast a little off downtown, built in 1790 and the inspiration for Tara in Gone with the Wind.

You’ll also find Rosalie, a white-columned masterpiece right on the Mississippi River, which once served as home to the Union Army. There’s also Stanton Hall, which could stand in for the White House in a pinch, and was a barracks for Union soldiers after the Irish-American owner died.

Natchez has the largest concentration of these mansions in America, and during the annual pilgrimage seasons, even the ones that are still private residences open to the public — though you can visit many all year. 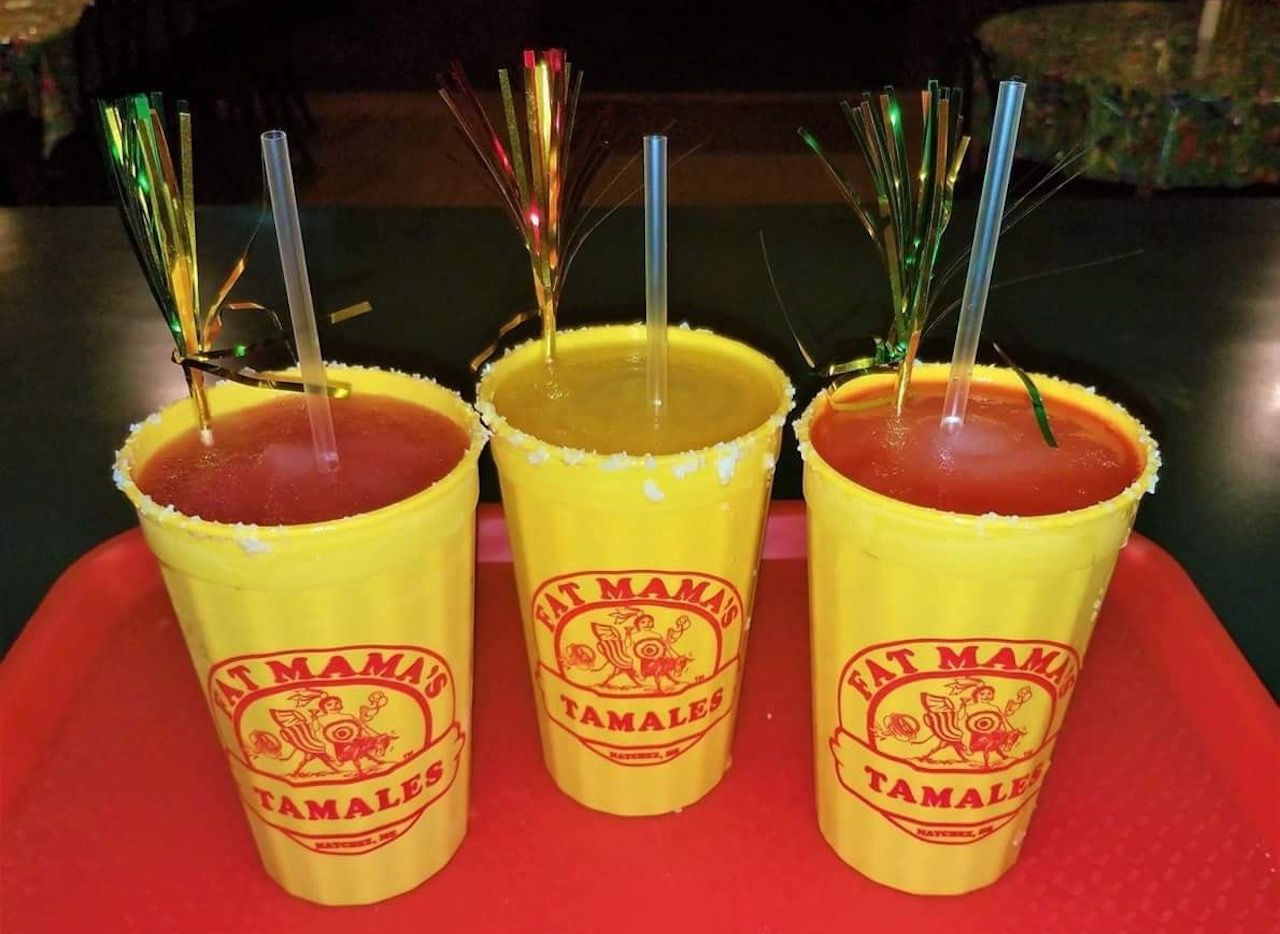 “Imagine sitting on this commode, doing your business, and all of a sudden — WHOOSH — the bar in front of ya’s gone. That’s what happened during the mudslide!”

Andre Farish was excited to tell me the history of the mudslide of 1980, when his Under-the-Hill Saloon, set down the bluffs from the rest of Natchez in the historic neighborhood of the same name, was half destroyed. Apparently, some poor soul was caught “doing his business” when the walls finally gave way.

Under-the-Hill was the city’s main port for decades, home to saloons, gambling houses, brothels, and other businesses big with transient merchants. It’s now home to Farish’s historic bar, as well as a collection of new Southern restaurants like The Camp and Magnolia Grill, where you’ll find food as good as you would down the river in New Orleans.

“What time do the bars here close?” I asked him.

“Whenever we want!” he said with a smile. “Tonight, that’ll be pretty late.”

Knowing I had some time, I made for the top of the bluffs and past the sprawling park overlooking the Mississippi, and got lunch at Fat Mama’s Tamales — home of the Knock You Naked Margarita — and also home to heaping plates of Frito pie. The word “vegan” does not appear once on the menu, and ordering anything other than a Marg to wash down your tamales will get you a funny look from the cashier.

Again, it felt a little liberating to see a restaurant full of people ordering whatever they want with no regard for calories or the origin of their food. It’s not that people there don’t know, they just don’t care, and that was refreshing. I ordered two beef tamales and a Knock You Naked, though thankfully I kept my clothes on.

That afternoon I watched people suck down crawfish by the pound at the Bishop Gunn Crawfish Boil. To those not familiar with the band this might sound like a Catholic church fundraiser, but it is, in fact, a Southern rock festival headlined by the band Bishop Gunn, native to Natchez. Despite the pouring rain, the whole city stuck it out in a glorious kind of redneck Woodstock.

The crowd was surprisingly diverse, with a better mix of white, black, Asian, and Hispanic attendees than I’m used to seeing at big, expensive festivals like Coachella. No one seemed excluded, everyone seemed happy, and, for one rainy afternoon at least, it seemed that Natchez’s difficult history was put aside in the name of having a good time — which seems to be its main priority now. 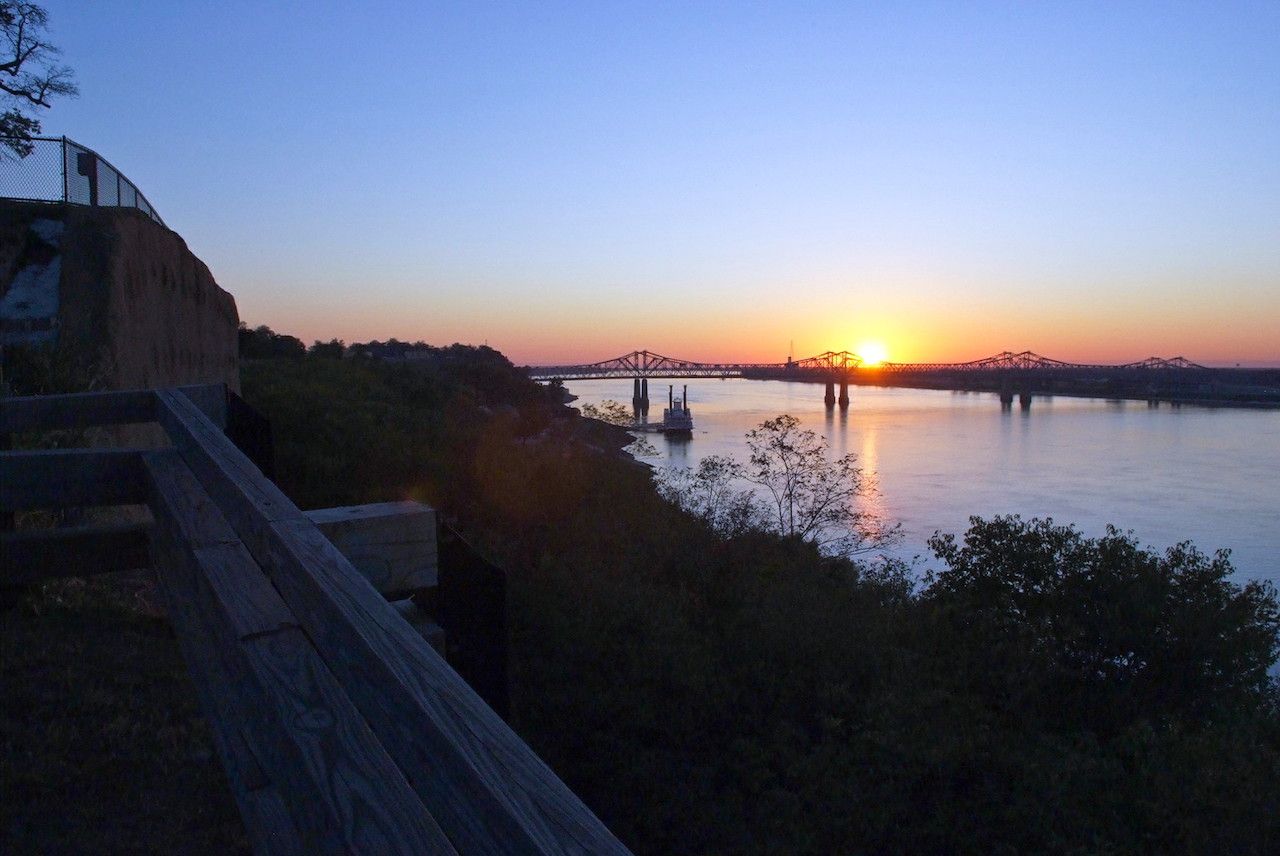 After the Crawfish Boil, I wandered into the Corner Bar, whose doors are the swinging, Old West type. Inside, the cloud of smoke is almost as thick as the Mississippi accents (yes, smoking is still allowed inside here), and locals noticed me almost as soon as I walked in.

“Where you here from?” asked a lady with stringy silver hair who looked like she’d been in this bar since about 1978. I told her I was from Miami.

“Mi-AMI???” she asked. “Well, I sure hope you can find some fun here in Natchez, Mississippi. We ain’t Mi-ami. But we know how to have a good time.”

It was past 3:00 AM, and the crowd here looked like it had no intention of wrapping things up anytime soon. In a city where having a Knock You Naked Margarita with lunch was commonplace, Miami was starting to seem a little reserved.

CultureIs Your City Pricing You Out? Here’s What Life Could Be Like in America’s Most Affordable City
Tagged
Culture Insider Guides
What did you think of this story?
Meh
Good
Awesome