Most international visitors to Wales head to Cardiff in its southeast region. Located only a couple of hours from London and with its delightful Victorian arcades, a medieval castle, an enviable bay, and plenty of sports events, it’s no wonder the Welsh capital is such a magnet. But if you only stop here, you’ll miss out on the stunning wilderness and wildlife this country has to offer.

Starting from Cardiff, access to the rest of Wales is easy. Distances are short, routes are scenic, and the weather is, well, still Welsh weather. From south to north, you can roll down Merthyr Mawr Sand Dunes or visit the wild Llŷn Peninsula — maybe even bump into Bear Grylls, who happens to own an island there. Or you can go as far as Anglesey (the Mother of Wales) with its record-breaking Llanfair­pwllgwyngyll­gogery­chwyrn­drobwll­llan­tysilio­gogo­goch — the longest town name in Great Britain. All along, it’s possible to walk the entire Welsh coastline by following the Wales Coast Path. But if you really have to choose, these are the five most deserving natural heavens you shouldn’t miss on your next vacation in the Land of the Red Dragon. 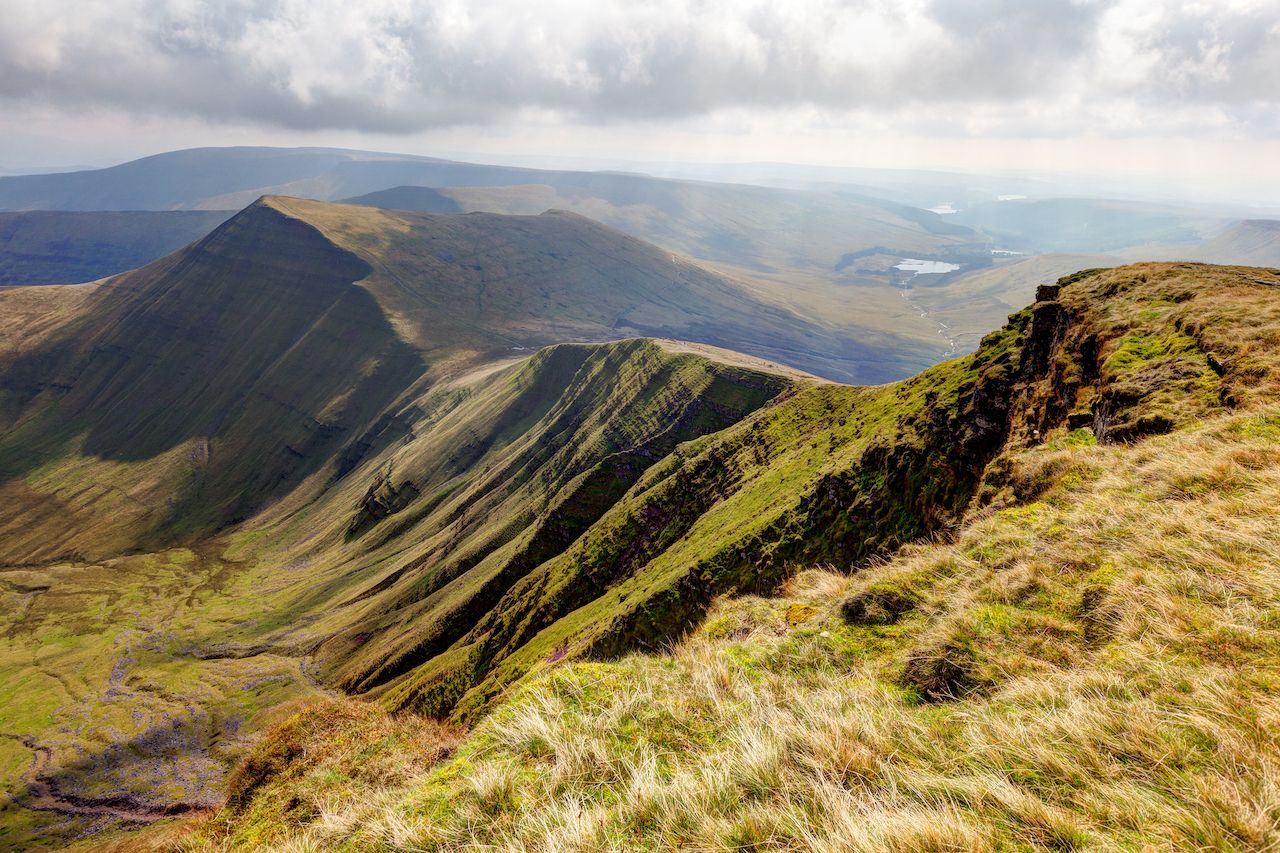 Brecon Beacons is rugged mountains, hills, forests, waterfalls, lakes, rivers, caves, moorland, and so much more. Among the many walks to choose from there, the most popular is a circular hike to the top of Pen y Fan, which at 2,907 feet is the highest peak in southern Britain. It goes from Storey Arms Outdoor Centre to mount Corn Du first, Pen y Fan second, and then back to Pont ar Daf car park.

To make it longer, the option is to see three more peaks on the way down. At Pont ar Daf, there’s plenty of food and drinks to reward yourself, including Welsh cakes made just for dogs. T4 bus takes you from Cardiff city center to Storey Arms in 1.5 hours — and it’s free on weekends. Alternatively, you could also canoe or kayak along the River Wye or head to the town of Hay-on-Wye, which is known as “the town of books” and hosts a prominent literature festival each May. Brecon Beacons even has a dinosaur park, which is fun for kids.

The Gower was the UK’s first Area of Outstanding Natural Beauty. 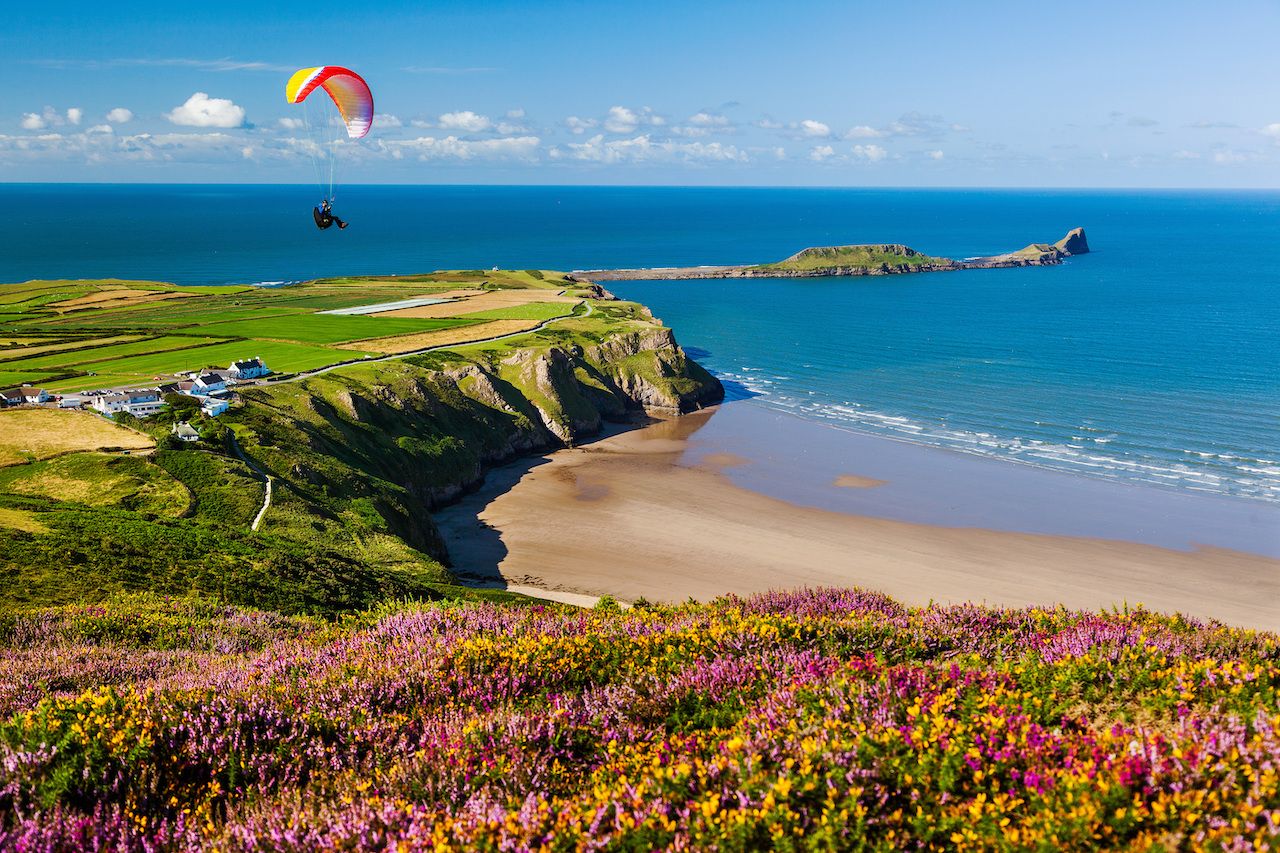 The Gower Peninsula in south Wales is so beautiful that it inaugurated the list of The National Association for Areas of Outstanding Natural Beauty in 1956. Since then, 45 more British areas have been added, four of which are also in Wales. You can start exploring the Gower from the posh town of Mumbles in Swansea Bay, with Catherine Zeta-Jones’s Welsh residence round the corner. But for the highlights, you’ll have to reach Three Cliffs, Oxwich, or Rhossili Bay.

Rhossili, in particular, has been recognized as one of the best beaches in Great Britain, Europe, and even the world — which says a lot for a beach in a country not renowned as a beach destination. The three-mile-long beach is majestic in its simplicity: the sea, which reflects the mood of the blue or grey sky; the pale sand; and vibrant green on the cliffs that overlook it. It also has a famous ice cream shop called Taste of Gower that you don’t want to miss. N.A.T. Group buses can take you from Swansea bus station to the Gower, including Rhossili.

Flat Holm is not flat at all. 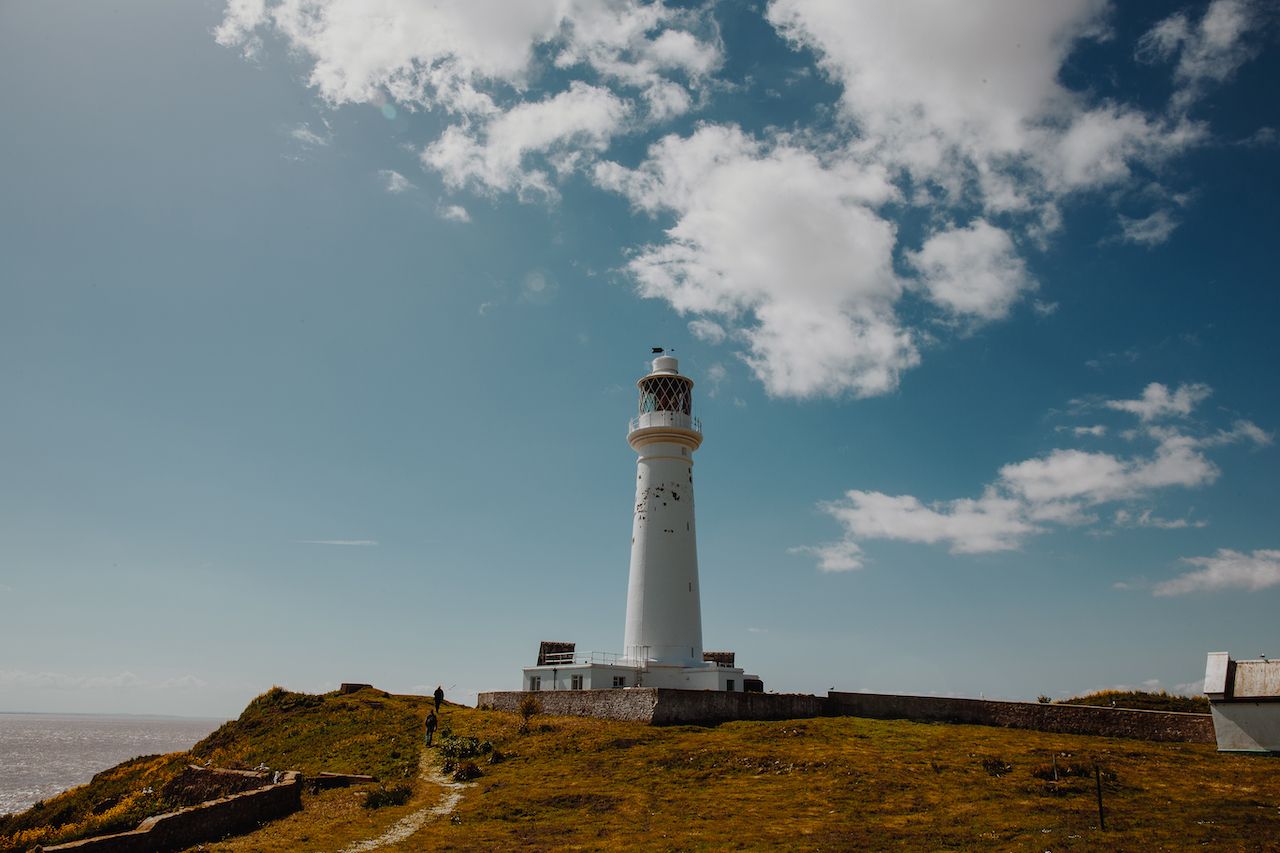 The island of Flat Holm is a 15-minute RIB boat ride from Cardiff Bay. But don’t expect just any ride. It can be an exciting, adrenaline-filled trip or gut-wrenching affair, depending on water conditions. This islet lies in the middle of the Severn Estuary between Wales and England, right next to Steep Holm, and is dominated by a lighthouse. Despite being so close to the city’s buzz, it’s a magical place to get away from it all.

It also has great scientific and historical significance as so much has happened here over time. Once used for smuggling, it then became the site of an isolation hospital for cholera patients, and later a defensive outpost during WWII. Also, it was from here that Guglielmo Marconi sent the first wireless communication message in the late 1800s. Nowadays, it’s a Local Nature Reserve and home to the UK’s second-largest breeding colony of lesser black-backed gulls. Three-hour guided tours allow visitors to experience all of this nature and history first-hand. Also, from 2019, the Cardiff Harbour Authority organizes yoga and meditation weekend retreats.

The coast, cliffs, and coves of Pembrokeshire. 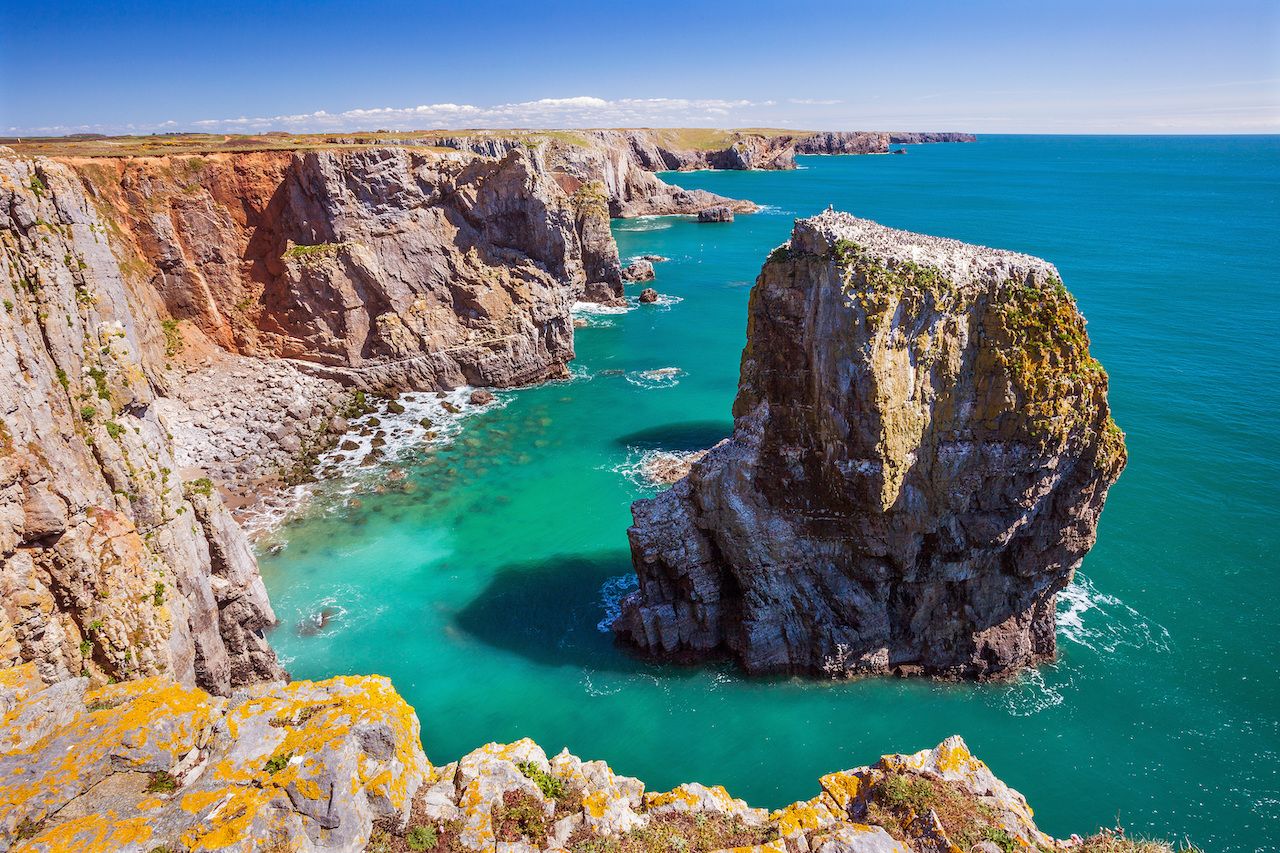 Pembrokeshire is the westernmost county of Wales. It’s well-known for its picturesque towns, such as Tenby, Pembroke, Milford Haven, St. Davids, and Fishguard. As you’d expect, it’s not short of its share of famous castles and cathedrals, either. These towns are a good starting point for the Pembrokeshire Coast Park National Trail, which runs continuously for 186 miles and is one of the longest sections of the Wales Coast Path. It grants wonderful views of cliff tops and hidden coves, small villages and sandy beaches, wildflower meadows, and grazing cows. Besides nature, Pembrokeshire’s Skomer Island is famous for its puffin colonies and other seabirds and sea life. And a little further north, New Quay in Cardigan Bay is a perfect location to spot bottlenose dolphins. Find a train from Cardiff to Pembrokeshire on GWR.com and a boat to Skomer on the Pembrokeshire Islands website. 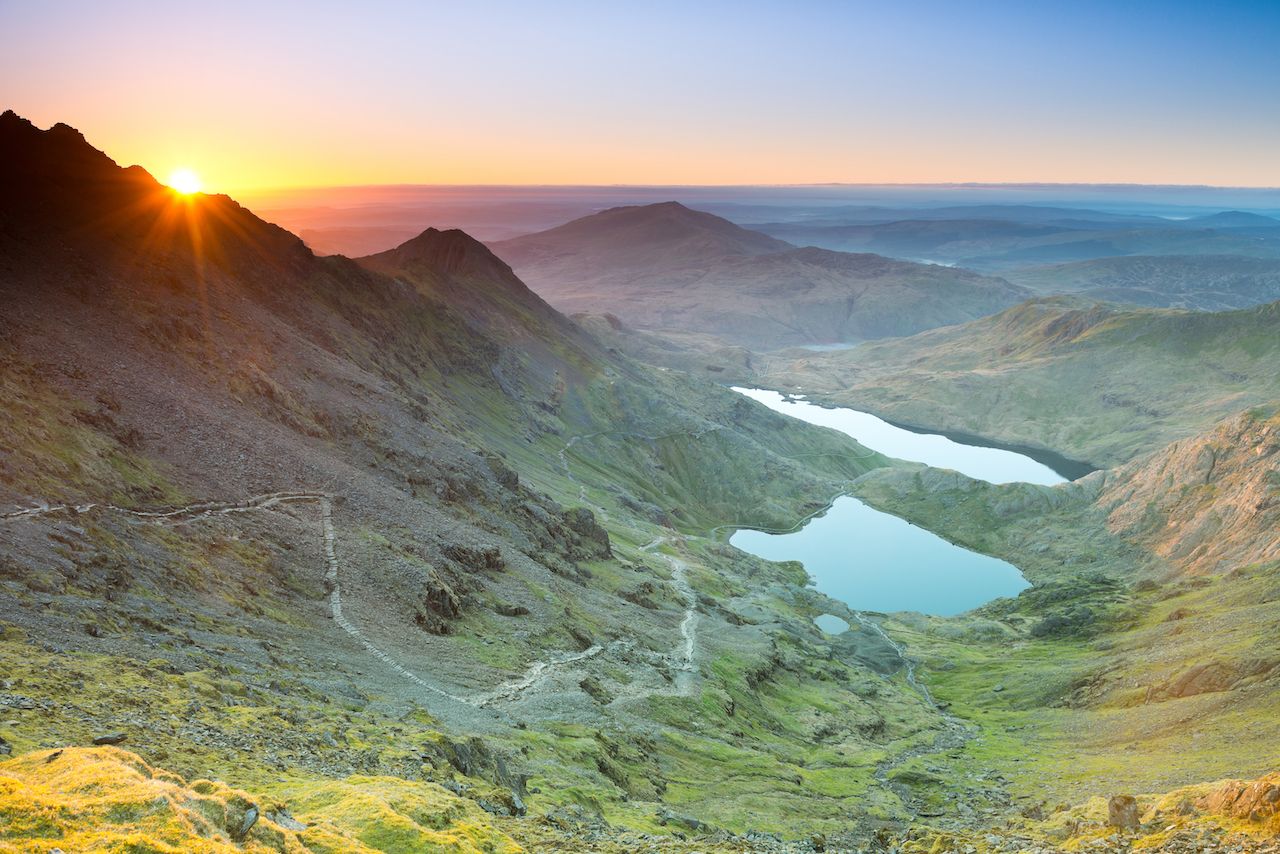 To cap it all, there’s Mount Snowdon in north Wales. It’s Wales’s highest peak, at 3,560 feet, and an absolute must for all nature lovers. There are six main routes to reach the summit, from the hardcore Crib Goch to the gradual Llanberis Path. The latter will take you up and down in about five hours beside the Snowdon Mountain Railway, which is an even easier way to the top. All along the way, there are views of an imposing slate quarry and a multitude of glacial lakes. And as you go higher up, you’ll be greeted by gulls and might even spot the island of Anglesey in the distance.

Apart from hiking, Snowdonia is also an excellent place for activities like mountain biking, climbing, whitewater rafting and — believe it or not — even surfing. For overnight stays, check out the charming Ty Gwyn Hotel in Betws-y-Coed, or Castle Cottage in Harlech, which has an award-winning restaurant. And as you make your way back to Cardiff, you might also want to stop a few hours in the elegant Portmeirion, which was designed and built over 50 years ago to resemble an Italian villa amid verdant Welsh surroundings.