Imagine, if you will, you’re in a country where the local water isn’t so good. Like international-travel-warning not-so-good, but in a drunken fit of dental hygiene, you brushed the hell out of your teeth with tap water. You wake up and have a horrifying realization you’re about to spend the next few days of your trip holed up in the bathroom, and you try and think of how you might be able to make it stop. Before it’s too late.

You COULD go down to the local hospital, which is probably full of locals with actual emergencies who’d rather not wait behind a tourist who had some bad tap water. What you really need is a gastroenterologist, but where would you even find one? And how do you say “gastroenterologist” in Nepalese?

This and other gut-wrenching conundrums could soon be a thing of the past as an app called Air Doctor aims to connect sick travelers to doctors overseas. The Israeli company was founded about a year ago by a group of people who’d found themselves in similar situations like the one mentioned above, and decided the world needed to do something about it.

“They were traveling abroad and got sick and noticed it’s impossible to get help,” says Yuval Zimerman, Air Doctor’s director of marketing and global partnerships. “You look on Google and you find stuff not in your language, you don’t know who to trust. And the hotels or your insurance company just send you to the hospital.”

So leveraging a vast network of international health care professionals, they set out to create Air Doctor. And thus far, it looks like it could change how we find health care abroad.

Seeing the ideal doctor in a not-so-ideal situation

Air Doctor’s functionality is painfully simple. You type your current location into the mobile-friendly site or app, select the type of doctor you’re looking for, then scan the results. Much like searching for hotels, rental cars, or airfares, it’ll display your options by price or distance from you.

Perhaps its most useful feature is the ability to filter by language spoken, so if you do find yourself in a town where it seems nobody speaks English, at least you might find a doctor who can.

If transportation is an issue, you can also filter by doctors who make house (or in this case, hotel) calls, and see who has appointments available soonest. If only there were ways to make doctor’s appointments at home this easily. 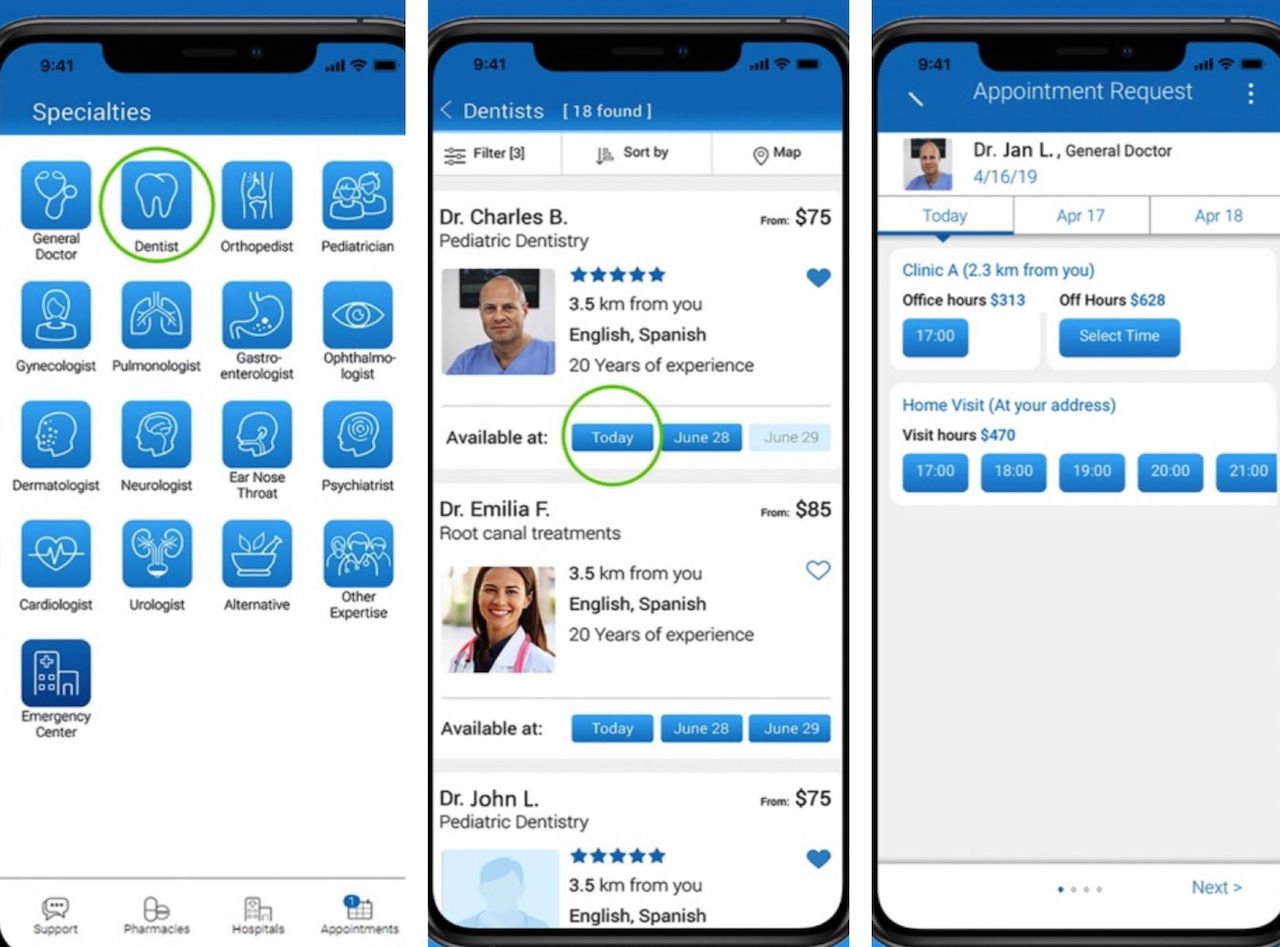 Of course, actually paying for Air Doctor can get a little dicier. If your home health insurance covers you for travel, look on Air Doctor’s site to see if they work directly with the app. If so, payment is as easy as walking in the door, once you’ve submitted your insurance information.

If you don’t have travel insurance as part of your general health insurance, you may want to look into it or get special travel insurance for your trip. Consulting Air Doctor’s list of providers before leaving might help you streamline that process too, but it’s not necessary.

How do we know these doctors are any good?

Like eating in unfamiliar restaurants and giving literally all of your personal information to Google, sometimes you just have to put your trust in strangers. Though you might not know Air Doctors from Air Supply, the platform’s competitive advantage is its network of doctors, who’ve been vetted before being placed on the app.

“The main value we have is our doctors,” says Zimerman. “We check and verify the doctors are licensed in their practicing country, so you know they’re doctors and not posing to be doctors. We have an additional vetting process that includes a lot of things, people on the ground, getting recommendations both from word of mouth and other doctors. And also local governments.”

The complete process, Zimerman says, is proprietary, since the doctors themselves are their selling point. But he also said in the year they’ve been operating, they have not received one complaint.

“The strongest we are is in Europe,” Zimerman added, saying Air Doctor’s network has grown from 500 doctors a year ago to over 8,000 today. “France, Germany, Spain, Italy, Western Europe we have covered. Thailand and Australia, also very strong. Mexico too. We’re just been building up the United States in the last month, and we’re also starting in South America.”

So for the moment, this tool can be especially helpful on your end-of-summer Euro trip. But by next summer’s cross-country American road trip, you might have an easier way of finding a local doctor than ever before. Nobody wants to spend their vacation in an emergency room, and most of the time you don’t have to — especially now that there’s an easier option on the table.

Food + DrinkEasiest Travel Destinations for Celiacs and Tips on How To Avoid Getting Ill
Tagged
Technology + Gear Travel Safety Wellness
What did you think of this story?
Meh
Good
Awesome