The story of how chiles ended up in what is now the United States likely starts in New Mexico. There are conflicting accounts of who exactly introduced the first chiles to the soil but there are two theories. The first is that when Spanish conquistador Antonio de Espejo led an expedition into the territories that would become known as Arizona and New Mexico in 1582, where he planned to set up a colony, he charged the indigenous Pueblo people with cultivating pepper seeds. One of the members of his party wrote that, “They have not chile, but the natives were given some seed to plant.”

Another theory states that Captain General Juan de Oñate, the first governor and founder of Sante Fe, brought chiles from Mexico to his new home in 1609. Either way, once Spanish colonization took hold in New Mexico, chiles became an essential crop in the state, and they remain so today.

Perhaps one of the most iconic chile-growing regions in New Mexico centers around a town called Hatch that’s near the Rio Grande river valley. It’s generally agreed that Hatch grows the best green chiles in the state, and the variety is appropriately called the Hatch chile. This versatile vegetable, which is often fire roasted, is incorporated into a number of dishes, from stews and sauces to enchiladas and chile relleno.

Perhaps inevitably, this spicy-sweet pepper, which is present year-round in New Mexican kitchens, has made its way to the Thanksgiving table.

“It’s impossible to understate how central green chile is to New Mexico’s food culture,” writer Kyle Paoletta, who grew up in a mountainous town just outside of Albuquerque called Sandia Park, but is now based in Cambridge, MA, tells me. “Many people eat it for breakfast, lunch, and dinner, and it’s so expected that every restaurant has some kind of chile on the menu — that most sushi places have a roll that includes it and McDonald’s serves a green chile cheeseburger. So if New Mexicans eat green chile at Thanksgiving, it’s only because we eat it literally all the time, no matter the occasion.” 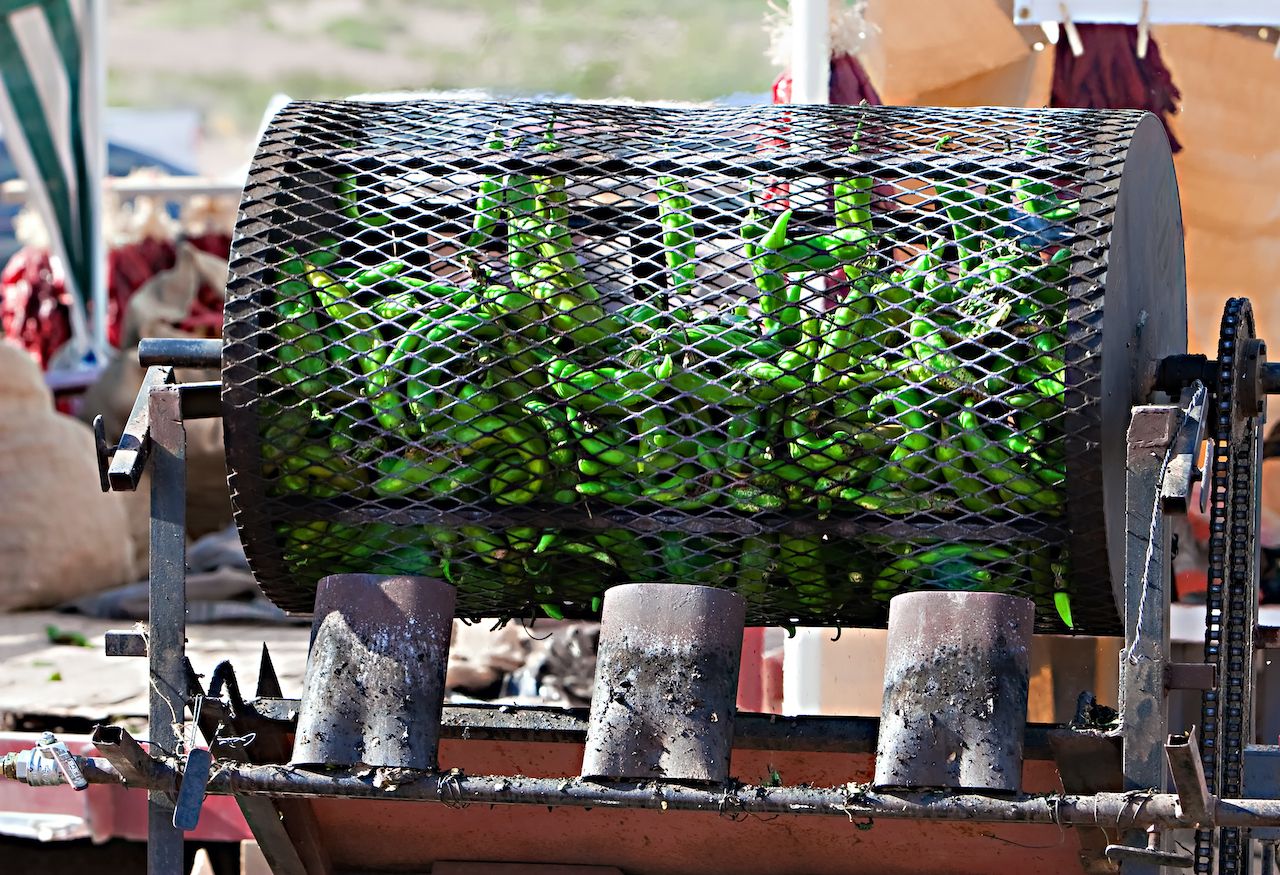 Amethyst Ganaway, a chef and food writer from Charleston who now lives in Albuquerque, says that everyone she knows from the region adds green chiles to their Thanksgiving menu in the form of a condiment, a green chile stew, or pozole, which is a traditional Mexican stew made with hominy, pork, and the equally popular red chiles.

People from New Mexico find a way to incorporate chiles into all of the classic Thanksgiving dishes you’ll find in other parts of the country, too, but the decidedly peppery twist might not be suited to everybody’s palate. Take mashed potatoes. Olga Garcia, head chef at El Paragua, told the Santa Fe New Mexican, “Traditional Thanksgiving meals always, always, always include red chile on our mashed potatoes, green chile carne as a side dish, or green chile in our stuffing.”

Even turkey, the most traditional Thanksgiving dish, can’t escape a distinctly Southwest green chile twist. Jane Butel, an Albuquerque based chef who dubbed herself the “Queen of Chiles,” adds green chiles to both her stuffing and her turkey gravy — two fairly widespread methods for incorporating green chiles into a Thanksgiving meal.

In stuffing, one of the most popular applications for green chile, added jalapenos kick up the heat, while herbs like cilantro, thyme, and oregano give this dish extra savory, earthy depth. The key to New Mexico green chile stuffing is cornbread — specifically day old buttermilk cornbread — which adds another layer of texture and richness to the dish.

In New Mexico Magazine, writer Kate Winslow reveals that the secret ingredient to her gravy is the addition of green chiles rather than the classic combination of leeks, rosemary, and chicken broth.

Predictably, traditional Mexican dishes also have a strong presence at the Thanksgiving dinner table in New Mexico. Winslow stuffs enchiladas with butternut squash for an extra autumnal flavor, then covers the dish in homemade red chile sauce. She leaves the extra on table as a condiment or as dressing for Thanksgiving leftovers in the following days. Winslow isn’t alone.

“My grandmother often made chile rellenos, which are green chiles that get stuffed with cheese, battered, deep fried, and then topped with more cheese and chopped green chile,” says Paelotta. He calls the dish “simply divine.”

Their versatility and flavor is just one reason that green chiles hold such a revered place in the cuisine of New Mexico. The more important point, Paelotta speculates, is that green chiles — first introduced to the region through colonization but quickly adopted by the indigenous people — are inextricably linked to the state’s complex history and its diverse population.

“I think that for a lot of Native Americans and Hispanics there’s a sense of green chile as an ingredient that speaks to New Mexico’s multicultural heritage,” he says, “while for Anglos, enjoying green chile is a way of feeling connected to that culture without necessarily being a participant in it.”

Road TripsNew Mexico Is the Best Place in the US for a Winter Road Trip
Tagged
Food + Drink Holidays New Mexico, United States
What did you think of this story?
Meh
Good
Awesome