When you imagine New Zealand, you might think of plunging bungee jumps, bright hobbit doors, and jagged mountain peaks. While the country is known for every kind of inland adventure, sometimes travelers forget that, at its heart, it’s an island nation, meaning the ocean is as much a part of the landscape and experiences as the mountains. From classic coastal scenes to wild shores, New Zealand beaches reveal a whole other side to the country. If you don’t want to spend all of your New Zealand travels lacing up smelly hiking boots, venture to some of these refreshing beaches instead. 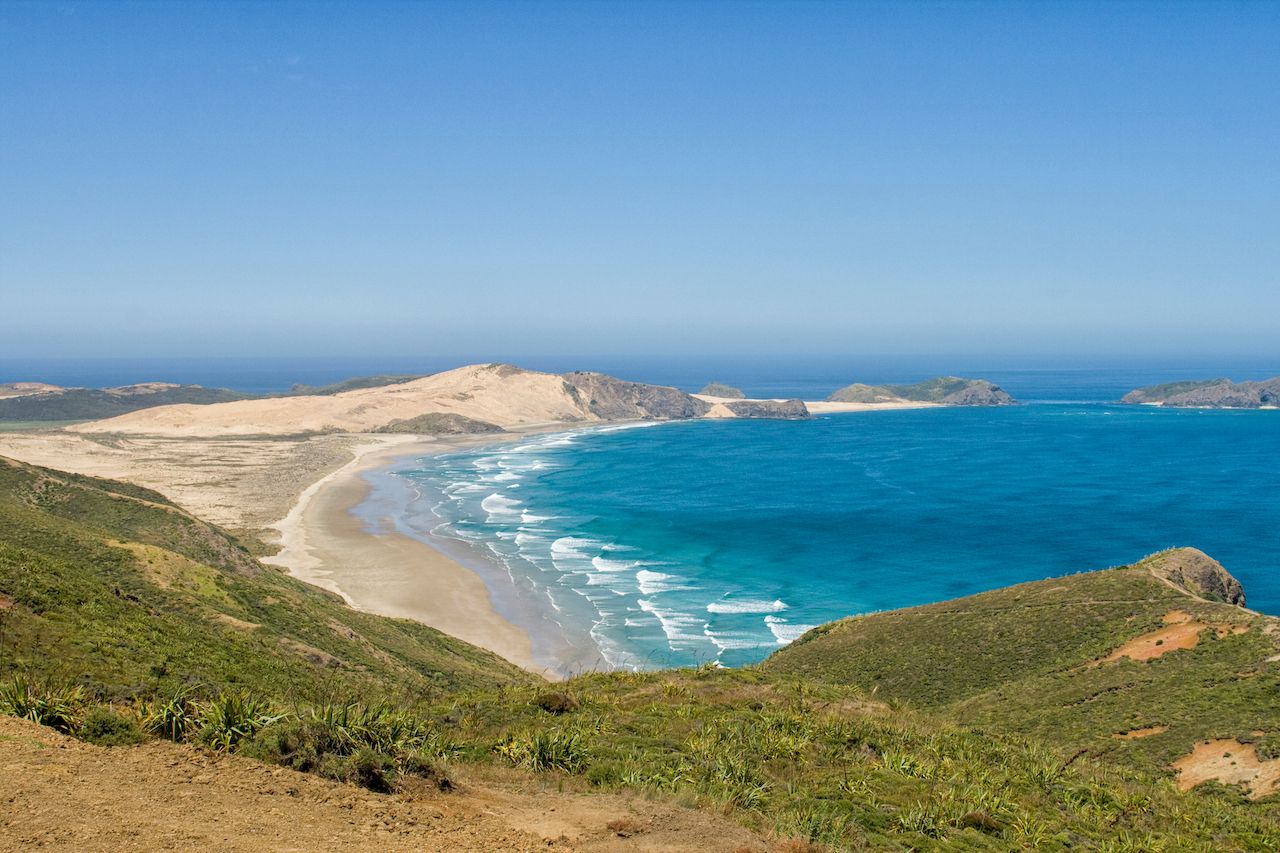 The Māori name for Cape Reinga is Te Rerenga Wairua, which means spiritual refuge, and it’s regarded as the place where spirits enter the underworld. It’s located at the northern tip of the North Island, and it’s where you can witness the meeting of the Tasman Sea and the Pacific Ocean, a unique mesh of waters you likely won’t get many chances to see elsewhere. While visitors tend to head straight for the cape, a halt at the surrounding beaches round out a North Island trip.

Make a stop at Tapotupotu Beach, where you can dig your toes in relatively unspoiled sands. This quieter scene is ideal for sunbathing and reading a book. For more action, head to Ninety Mile Beach, a long stretch of dunes popular for bodyboarding in between dips in the sea. In either case, renting your own car is the ideal manner of exploring the depths of this region. 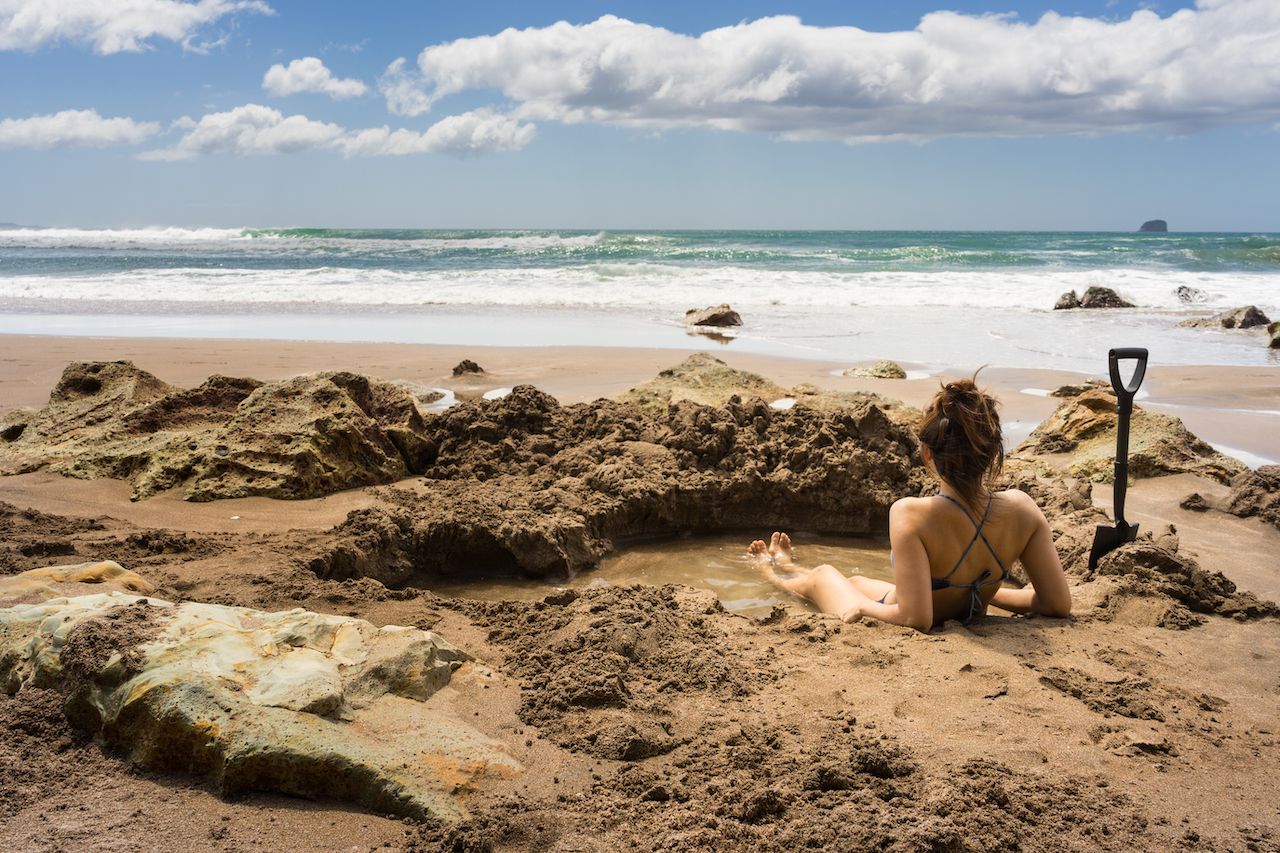 Also on the North Island, yet south of Cape Reinga, the Coromandel Peninsula is well known for its beaches — and Hahei and Hot Water are two that possess unique features. From Hahei Beach, you can access Cathedral Cove, a popular spot for photos. Peer out from under the natural arches of the cove at clear waters rolling over pink sands. When you’ve finished exploring, try snorkeling or simply lounging in your delightful surroundings. You can journey here on a ferry ride from Auckland to Coromandel and then a bus to Hahei.

Just south of Hahei and Cathedral Cove is Hot Water Beach. For trips here, be sure to bring a shovel, and not just for building sandcastles. At low tide, visitors tunnel down until they reach the natural hot springs seeping through the surface. Here, you can laze about in cozy, self-made springs. Just south of Cathedral Cove, this beach is an easy stop en route. 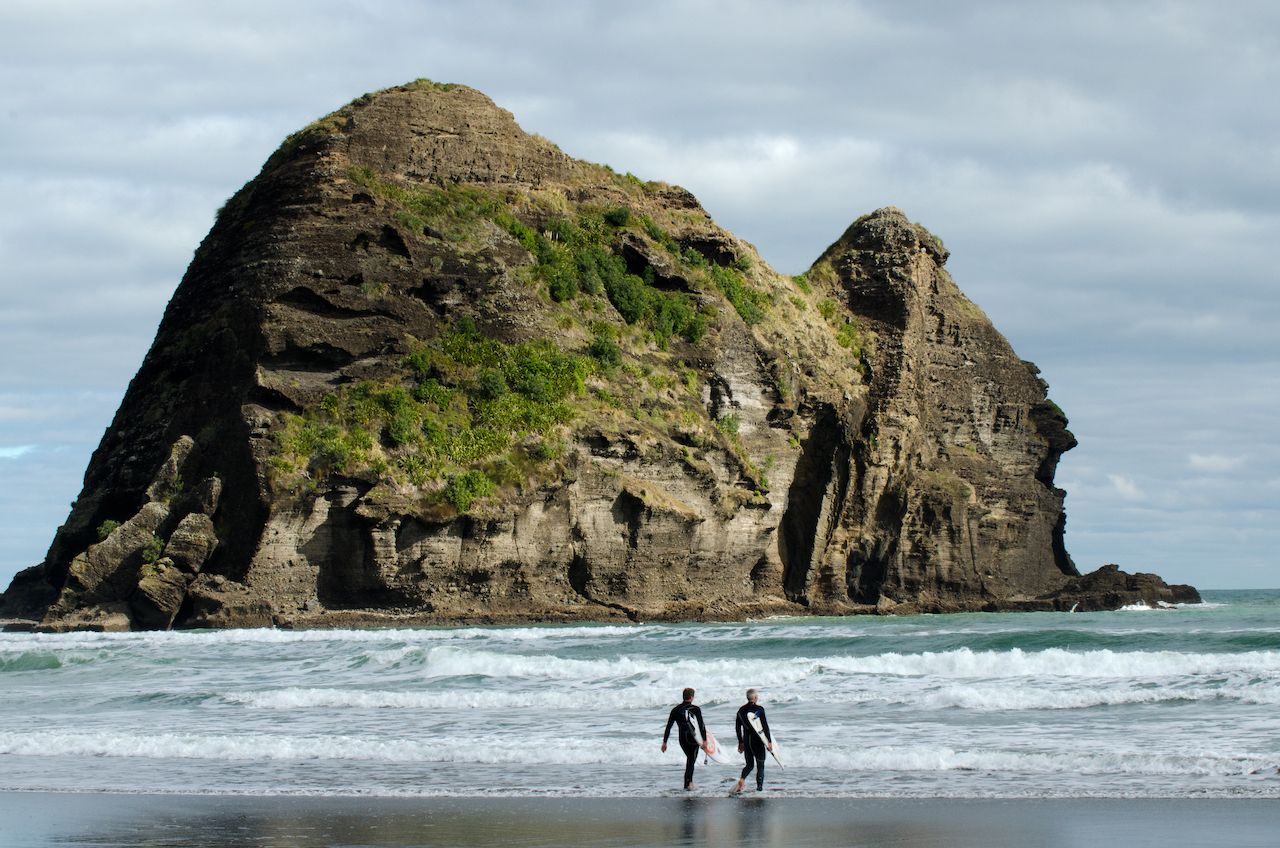 Just under an hour’s drive west of Auckland, itself in the upper portion of the North Island, Piha Beach draws visitors with its unique black sands, chipped away over centuries from volcanic rock. You’re likely to meet some surfers riding Piha’s gnarly waves, or maybe you’ll be cruising alongside them with your own board. When you need a break from getting pummeled by the surf, join the folks reclining in the sand or wander up to Lion Rock, one of the beach’s unique rock formations. At the end of the day, the coal-hued shore, wild blue waves, and cool surroundings make for one striking vista. 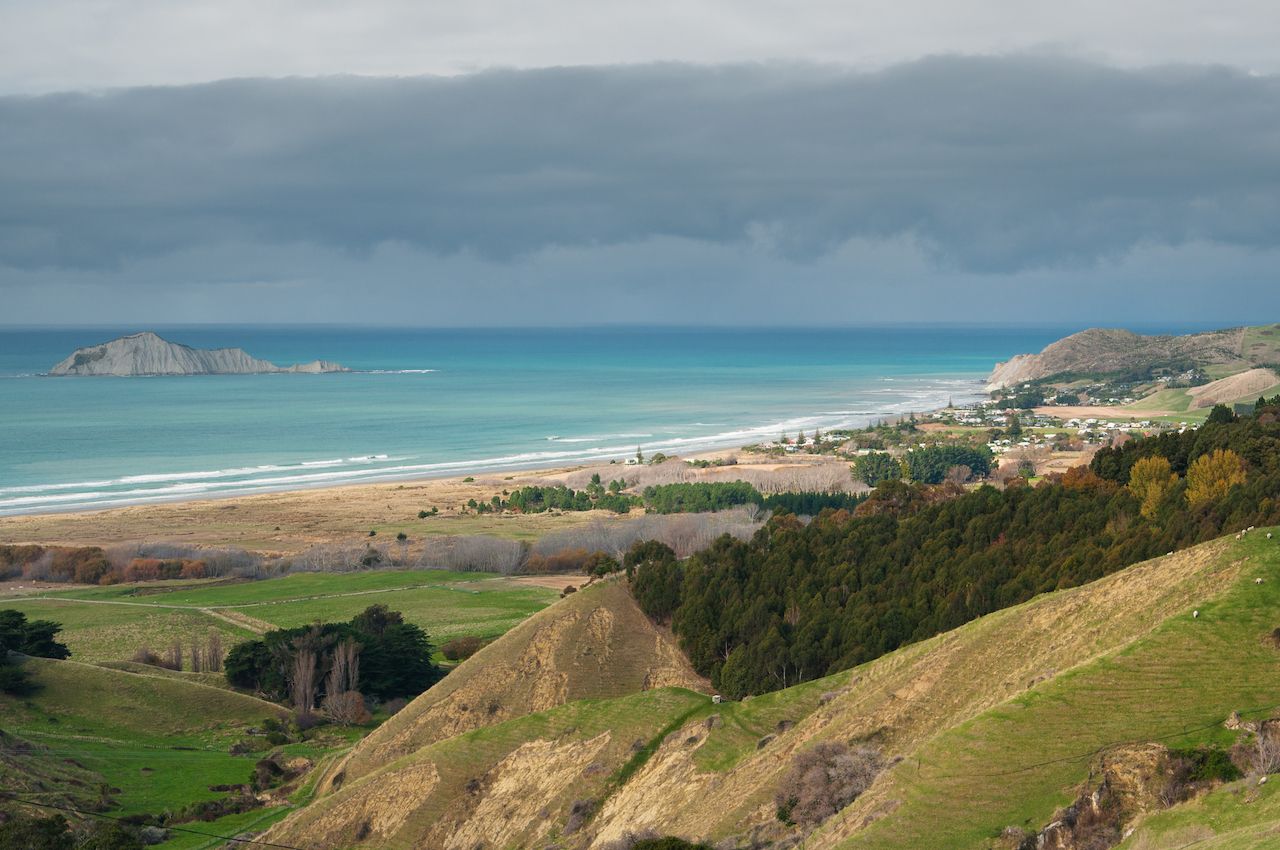 On the North Island’s east coast, the Hawke’s Bay region perfectly meshes the keys to rest and relaxation: world-class wine and world-class beaches. The beauty of Waimarama beach lies in Hakikino, a former Maori fortress that’s now a historic and educational site. Otherwise, the abundance of beaches in Hawke’s Bay makes the crowds spread out enough for visitors to feel like they’re in seclusion, and you can hop your way up through other dreamy shores, such as Ocean Beach, and several wineries. Road-tripping is the best way to rove this corner of the North Island at your own pace. 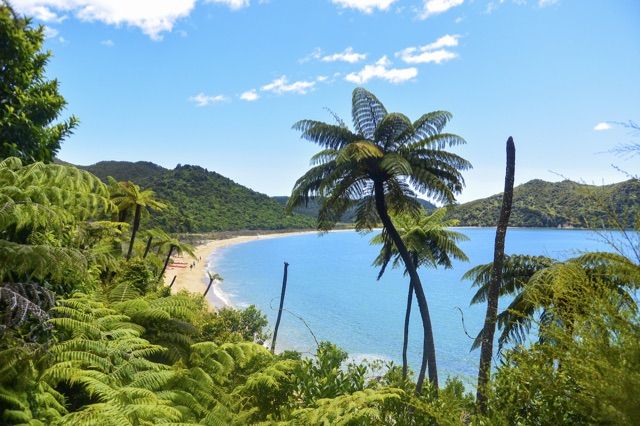 Hopping over Cook Strait to the South Island, head to Abel Tasman National Park in the South Island’s northwestern terrain. This protected area is dotted with beaches and campsites along Tasman Bay, from Observation Bay to Onetahuti and beyond. While it’s New Zealand’s smallest national park, it packs plenty of appeal. Relaxing and taking in iconic sites, like Split Apple Rock, are famous choices among visitors, though you can always go for a walk on nearby trails or kayak in the turquoise bay. Campgrounds are abundant here, allowing you to fully immerse yourself in the wilds of beach life. 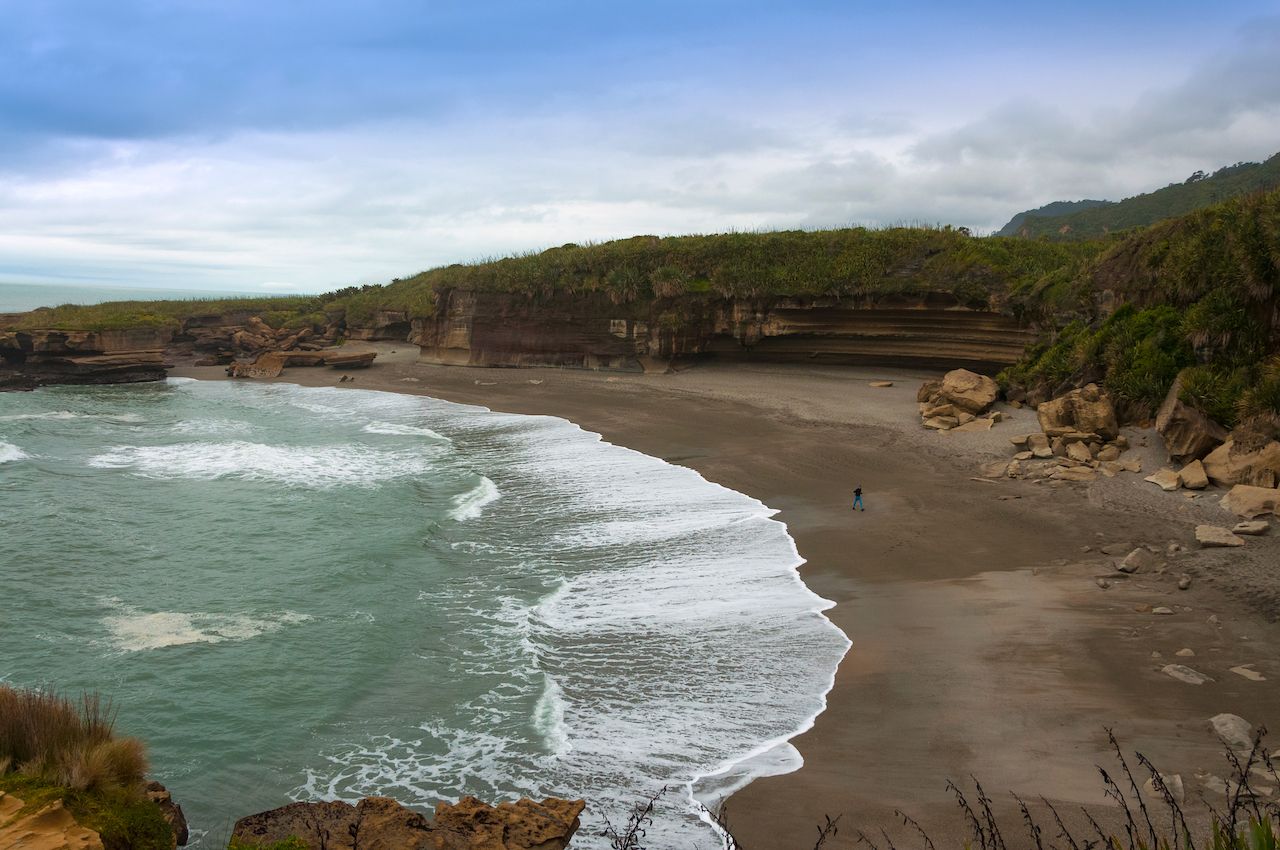 From Abel Tasman, you can travel down either the west or east coasts of South Island. Travelers bound for Wanaka and Queenstown will take in the craggy coast bordering Tasman Sea in the west, though it’s not too craggy for a break. At Punakaiki Beach, walk along the black sand shores and venture into the cool water. Travelers also tend to visit the nearby Pancake Rocks, neatly stacked formations made for breakfast trays, and the seal colony at Tauranga Bay. A car will be necessary for these excursions, allowing you enough flexibility to discover more beaches down the stretch of coastal wonders.

If a car is a no-go for you, the InterCity bus stops at Hokitika. The beach here won’t be as secluded, but the location is easily accessible and allows you to travel between shore and town at your leisure. When visiting in the summer, look out for the Driftwood and Sand event, where the artistically minded construct sculptures using natural beach materials. Visitors can participate too, and this welcoming attitude is one you’ll encounter all through your coastal tour of New Zealand. 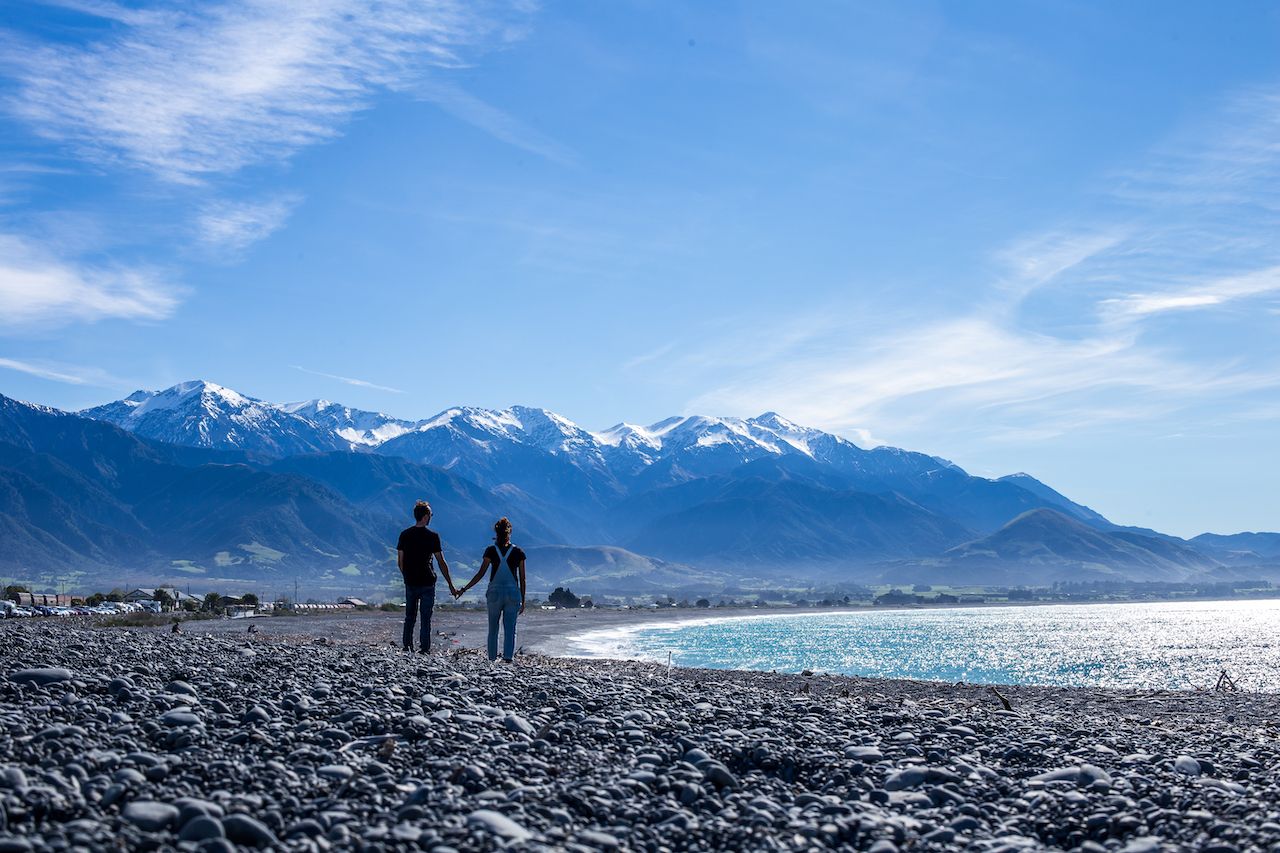 The South Island’s eastern shores mirror the western’s blend of peace and activity. Kaikoura is the recommended town for embarking on whale-watching tours, swimming with dolphins, spotting blue penguins, and generally familiarizing yourself with New Zealand sea life. Beach life here is less about relaxing, though you can certainly lay out your towel and lather on your sunscreen. InterCity buses make it easy for travelers relying on public transport to access this area, and the Coastal Pacific Train, reopened in late 2018 after years of earthquake repairs, is helping to bring the eastern rim back to life. 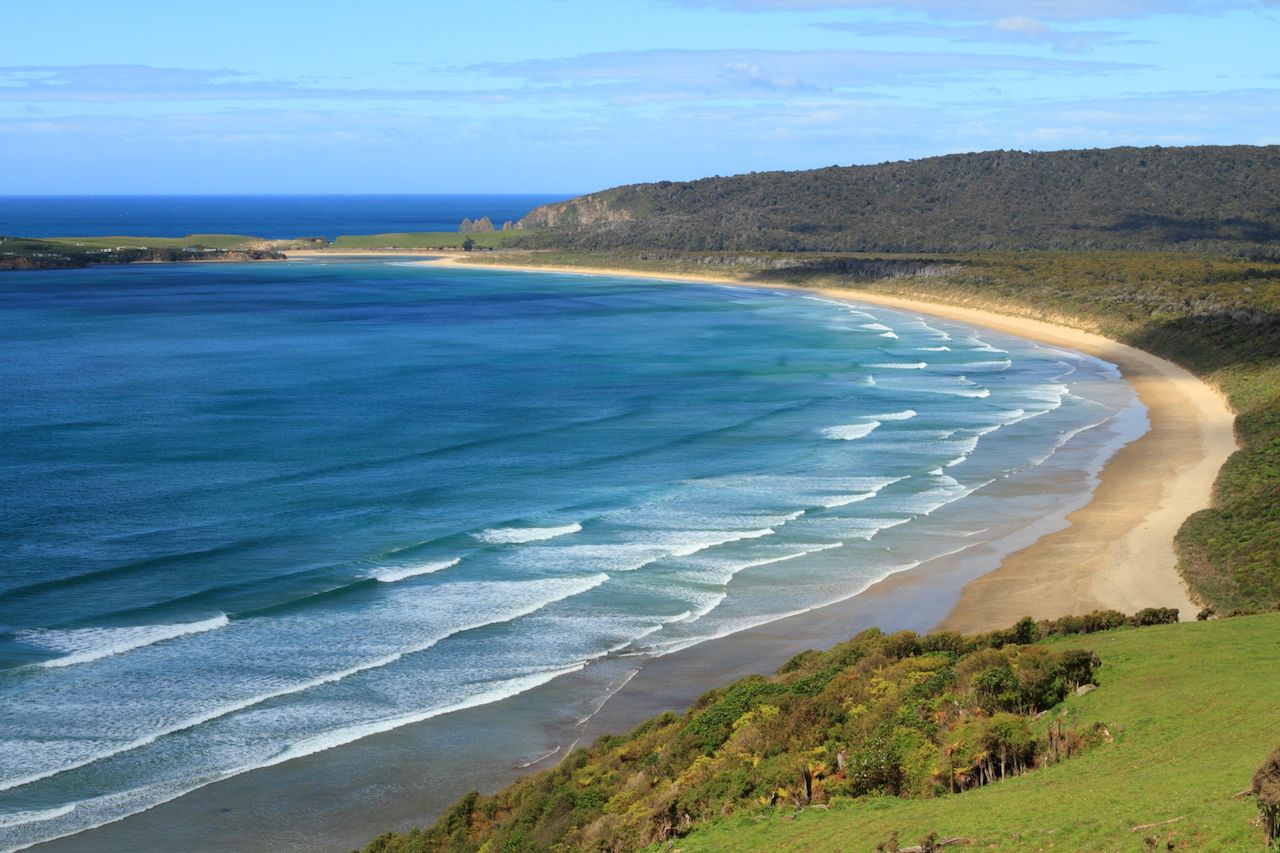 Following State Highway 1 south from Kaikoura, there’s no shortage of beaches you can visit all the way down to The Catlins region — at the bottom of the South Island — and then back up again the west side. Traveling along the perimeter of both main islands, you’ll have your pick of both well-trodden and overlooked shores, and be sure to make some time for the latter along the way. Some of those seemingly boring towns might surprise you.

However, not quite so far south, but just an hour north of Christchurch, Amberley is a town that most travelers tend to plow through en route to the South Island’s largest city, but it’s a welcome diversion from the worn path. Stroll along empty trails, pet a dog taking its owner for a walk on the beach, and read a book against the lull of waves. 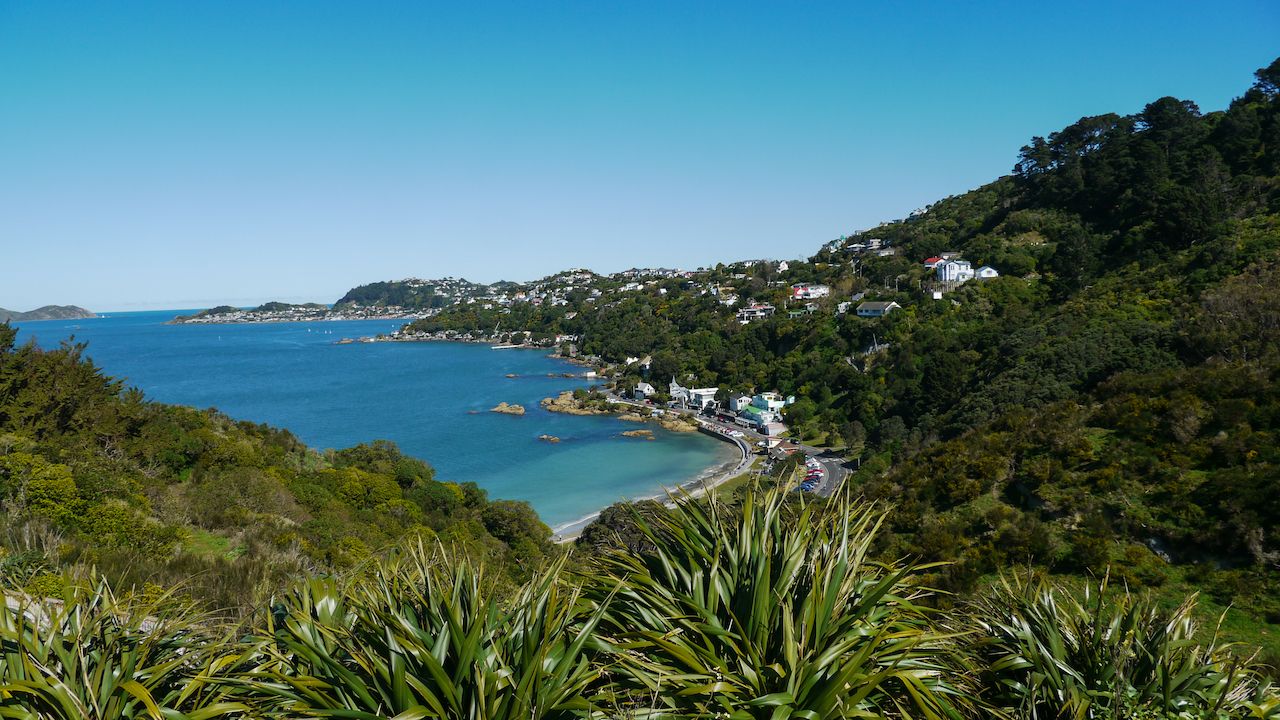 In Wellington, at the North Island’s south end, travelers can take a dip in the sea without sacrificing a night in the country’s capital. Take a bus to Scorching Bay or Lyall Bay, two easy journeys from the city, before you head back to check out Wellington’s nightlife. If you’ve got a car, make a day trip to Castlepoint, where you can visit both a lighthouse and sandy shores. For spur of the moment “beach” trips, you can even jump in from the docks of Wellington Harbour and relax in view of Oriental Bay and its sky blue boathouses.

SurfingRaglan, New Zealand, Is the Coolest Surf Town You’ve Never Heard Of
Tagged
Beaches and Islands Insider Guides New Zealand
What did you think of this story?
Meh
Good
Awesome