Until the 19th century, the Nile was Egypt’s artery, transporting goods, effigies of gods, mummies, and people. But cruising the Nile for leisurely purposes was perhaps most famously endeavored in 47 BC, when Julius Caesar and Cleopatra VII, Egypt’s final and most illustrious queen, are said to have gone on a sightseeing tour up the Nile. Equally enamored with Cleopatra and the sumptuous riches of her kingdom, Caesar ensured that Egypt would remain sovereign for the rest of his tenure at the helm of the Roman Republic.

Today, over two thousand years after the sailing of the Nile by these historical characters, the tradition lives on. Cruising the Nile has become a highlight of any visit to Egypt, whether you’re a queen, a statesman, or just a regular tourist. This is, perhaps, because it’s the best way to see the country’s extant temples. Unlike ancient times, however, the modern spin on a Nile cruise can take many forms depending on your budget and interests.

Cruising the Nile vs sightseeing by road

Planning a trip to Egypt can be a daunting task since the country is geographically enormous. And it doesn’t help that its major tourist sites are far apart: There’s Cairo and Alexandria in Lower Egypt (the northern half the country, bounded by the Mediterranean) separated from Luxor, Aswan, and Abu Simbel in Upper Egypt by an overnight train or a 12+ hour bus ride.

This is where cruising comes in handy. A Nile cruise is the most efficient way to see Upper Egypt.

The other dimensions to consider, on which Nile cruises beat sightseeing by road, are safety and ease.

Despite Egypt’s stability since the Arab Spring of 2011, tourists still prefer to take extra precautions. Nile cruises ensure a secure environment from which you can observe the landscapes of Egypt without having to step foot off the boat if you so choose.

Ease is self-evident. Luxury cruises provide gourmet meals, entertainment, and they serve alcohol — something you’ll be hard-pressed to find elsewhere.

Which boats to choose to cruise the Nile?

There are two ways to sail the Nile: By luxury cruise boat or felucca. The former option is the fastest and most comfortable mode of transport. 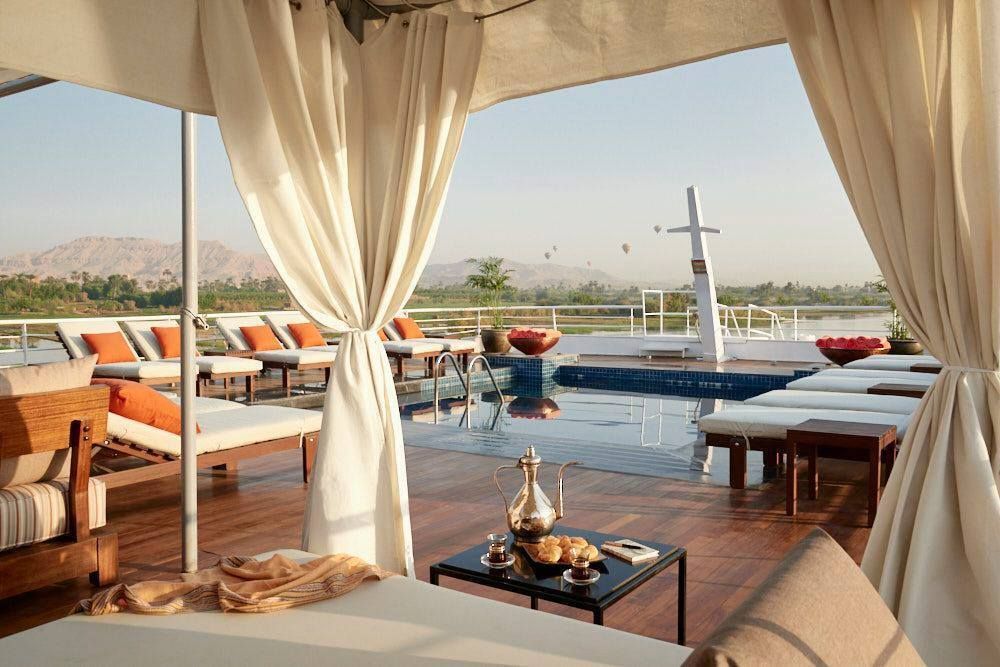 The baseline cost for a luxury Nile cruise is around $150 per night for a single cabin with a queen-sized bed. Larger cabins with balconies will be pricier. However, just about everything in Egypt is negotiable. If you’d like to try your hand at bargaining, cruise tickets can be purchased from salespeople at the docks in either Aswan or Luxor. You’ll most certainly find the best deal this way. But for those travelers who like planning in advance, opt to buy online. However, note that prices will be significantly higher.

Different companies provide different standards of luxury. But, across the board, you’ll have roof deck pools, some nightly entertainment, and gourmet meals. While it’s often the case that Westerners encounter stomach issues when traveling in Egypt, you should be able to let your guard down on a Nile cruise. Though, it’s always advisable to stay away from uncooked vegetables, ice, and water. 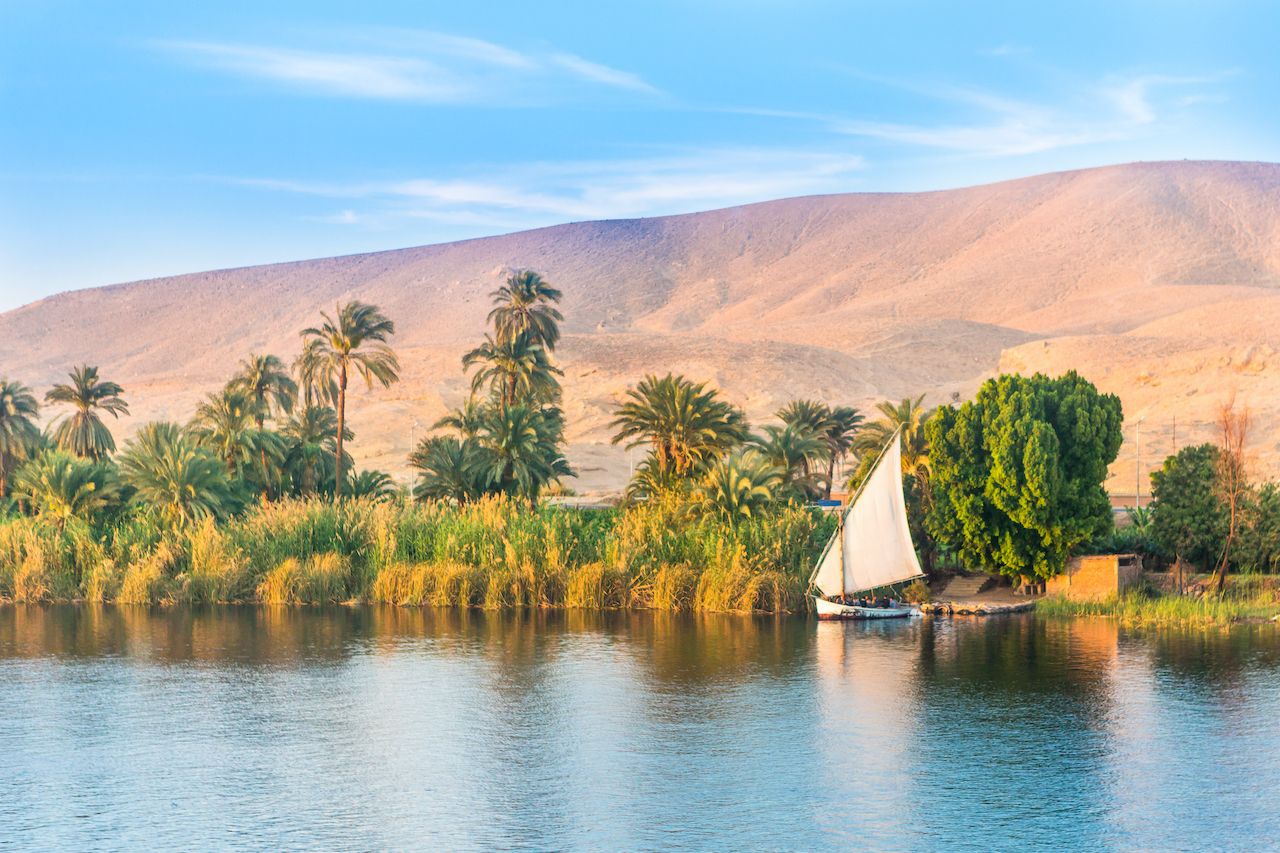 Traveling by felucca is for a different genre of tourist altogether: It beckons adventurers, daring solo travelers, and outdoors types.

Feluccas are an ancient mode of transport that rely on nothing but wind to reach their destination. They were zipping around the Nile back when Cleopatra’s royal barge sailed her and Julius Caesar.

Feluccas are operated by individual captains who will agree upon a price and itinerary with you in advance. Journeys include meals that the captain prepares. If you thrive on spontaneity, adventure, and authentic, local experiences, a felucca trip might be right for you. The best part of all: Each night, you’ll dock somewhere along the Nile and sleep under the stars.

Nile cruise boats saunter downriver at a leisurely 10 mph. But even at that rate, they outpace feluccas. Regardless of your itinerary, you can expect a felucca journey to take twice as long as a cruise.

Regardless, Nile cruise itineraries are temple-focused. And most, if not all, of the extant temples along the river in Upper Egypt were built, or rebuilt, during the Ptolemaic Period of Egypt. This was the last 300 years of Egypt’s existence as an autonomous kingdom, named after the Macedonian-Greek family that ruled at the time: the Ptolemies.

The Ptolemies were descendants of Alexander the Great, Cleopatra VII being the last among them. And despite their ethnically Greek identity, Ptolemaic pharaohs adopted Egyptian customs and endorsed various cults within the ancient Egyptian pantheon. 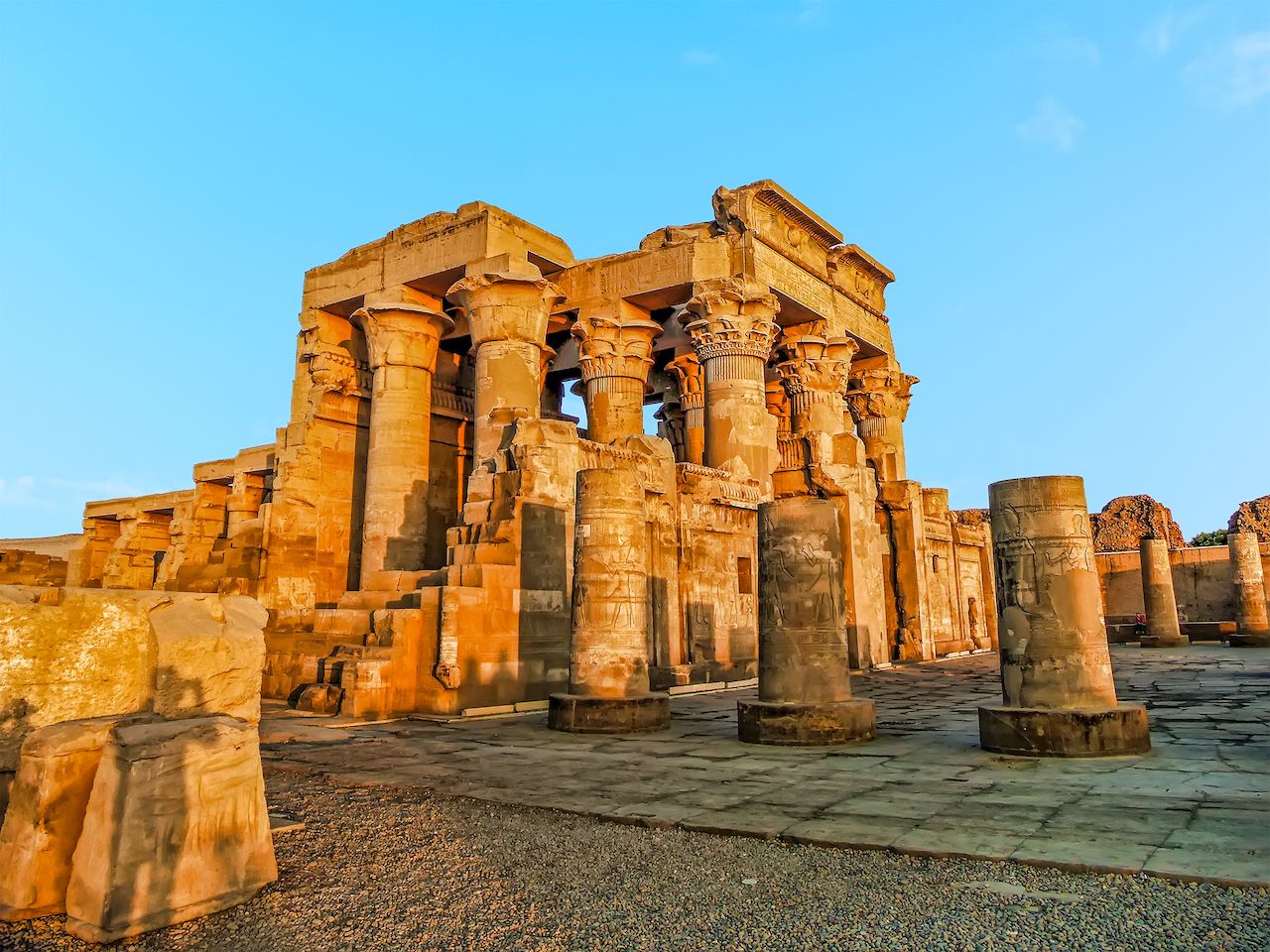 Kom Ombo is a temple of original Ptolemaic construction devoted to two divinities: Horus, the falcon god and the great crocodile god, Sobek. It bears evidence that worship of crocodiles continued under the patronage of the Ptolemies. Inside a chamber at Kom Ombo, there’s a room filled with mummified forms of these menacing beasts of the Nile. According to papyrus records, living crocodiles were once kept in the temple.

Farther downstream, the temple of Edfu stands as a shrine to Horus, the falcon-headed sky god, the son of Isis and Osiris. Edfu is a Ptolemaic construction on the site of an earlier temple. Here, statues dedicated to the god depicted as a falcon flank the looming entrance to the temple’s antechamber.

After Edfu, you’ll arrive at Luxor, better known as Thebes, during ancient times. Thebes was the most important religious and civic center of Pharaonic Egypt for thousands of years. In modern Luxor, you’ll find a chaotic city bejeweled with Egypt’s most treasured ancient sites. Most cruises will organize tours to the Valley of the Kings, Luxor Temple, Karnak, and the Mortuary Temple of Hatshepsut at this stop. 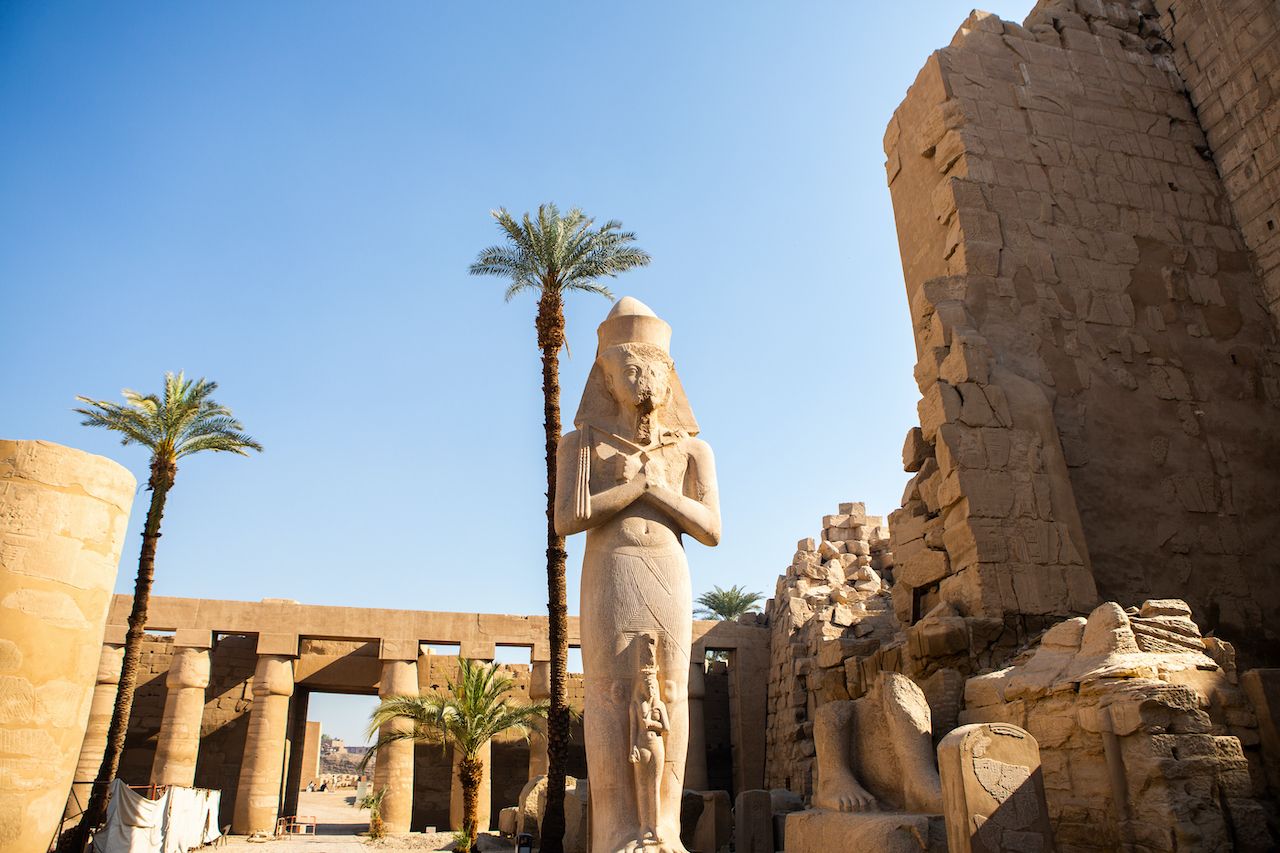 Itineraries that travel northward from Luxor are bound for the Dendera complex nearby the modern city of Qena. The Dendera Temple Complex, another one of Ptolemaic construction, was dedicated to the fertility goddess Hathor. Her signature countenance is emblazoned on all the capitals (the top of the columns) surrounding its structure.

Whether you begin or end your journey in Aswan, the main attraction here is the Temple of the goddess, Isis, on the island of Philae. It was originally constructed during the Ptolemaic Golden Age, a period of prosperity early on in the reign of the Greek pharaohs. Today Philae is perhaps the most recognizable ancient monument in Upper Egypt. 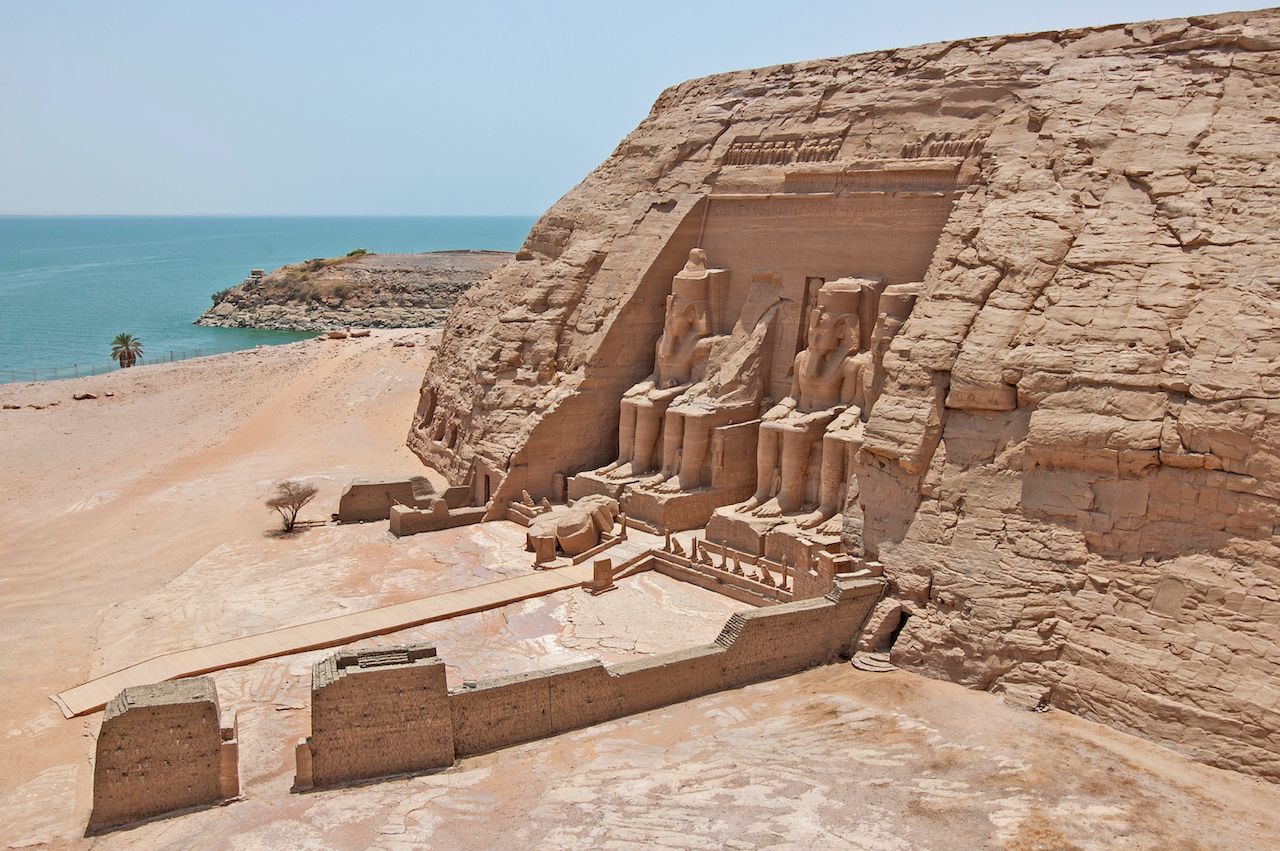 South of Aswan, only a stone’s throw from the border of Sudan, is Abu Simbel. This outstanding UNESCO World Heritage Site is home to the temple of King Ramses II and his wife Nefertari. It was discovered buried under sand during the first half of the 20th century and has since become one of the great surviving treasures of Pharaonic Egypt.

Abu Simbel is a three-hour drive south of Aswan and is one of Upper Egypt’s must-see attractions. If departing from Aswan, visitors should plan to go before embarking on their Nile cruise. Cruise operators generally don’t arrange Abu Simbel excursions, but any hotel in Aswan will be able to accommodate this.

Getting to departure points from Cairo

Almost all international flights to Egypt arrive at Cairo International Airport. So you’ll need to make a plan for getting from the capital to your cruise departure point, either Luxor or Aswan.

Fly: Egyptair operates direct flights between Cairo and Luxor several times per day. The total flight time is one hour, and tickets can range between $40 and $200 depending on how far in advance you book. Cairo-to-Aswan flights are also available but less frequent, and have a total flight duration of 1.25 hours. Flying is a fast, safe, and inexpensive way to get to your cruise departure city.

Overnight train: Take a ride on the Watania Express, the overnight train that connects Cairo with Upper Egypt, for an unforgettable adventure. Trains are advertised as a luxury, which is a highly debatable description. But the charm of the experience is worth it in its own right: You’ll be served dinner and breakfast in your cabin with views of the Nile and the Desert. Tickets can be purchased online or from Ramses Station in central Cairo as late as the day of your trip. The Watania Express leaves daily at 7:45 PM, arrives at Luxor the following morning at 5:55 AM, and continues for about 3.5 hours to reach Aswan. The cost for a one-way trip starts at $80.

Bus: There are plenty of buses that run between Cairo and Luxor. But the recommended company for tourists is Go Bus, which has air conditioning, Wi-Fi and typically departs and arrives on time. Travel time from Luxor to Cairo is about eight hours.

TravelHow To Explore the Best of Siwa Oasis, Egypt’s Most Underrated Destination
Tagged
Archaeology Cruises Egypt
What did you think of this story?
Meh
Good
Awesome

CDC Says It’s Now Safe To Cruise. Here’s How To Find Where Your Ship Ranks on COVID Protocols.