In Siwa, the call to prayer sounds out over mud-brick rooftops of an ancient fortress, echoing within its labyrinthine pathways. A glance beyond the fortress walls reveals a striking and wonderful contrast between clumps of lush palm trees, a vast salt lake, and the world’s third-largest dune field. Add the region’s hundreds of natural hot and cold springs, buoyant salt pools, and the possibility to discover the fascinating Berber culture, and you’ll wonder why tourists aren’t flocking to visit in the thousands.

The answer is simple: A journey to Siwa Oasis is not for the faint of heart. It’s a part of Egypt that few have heard of, and those who have are not often willing to brave the bumpy 10-hour desert drive from Cairo. The oasis’s relative isolation from the outside world has preserved the culture of its Indigenous Amazigh people, setting it apart from the rest of Egypt and rendering it a unique cultural destination. In the middle of a vast expanse of sand, the fertile and enchanting Siwa Oasis offers an experience that is hard to come by — total seclusion from the modern world.

If you are determined and curious enough to make your way to Siwa Oasis, here is how you should fill your days. 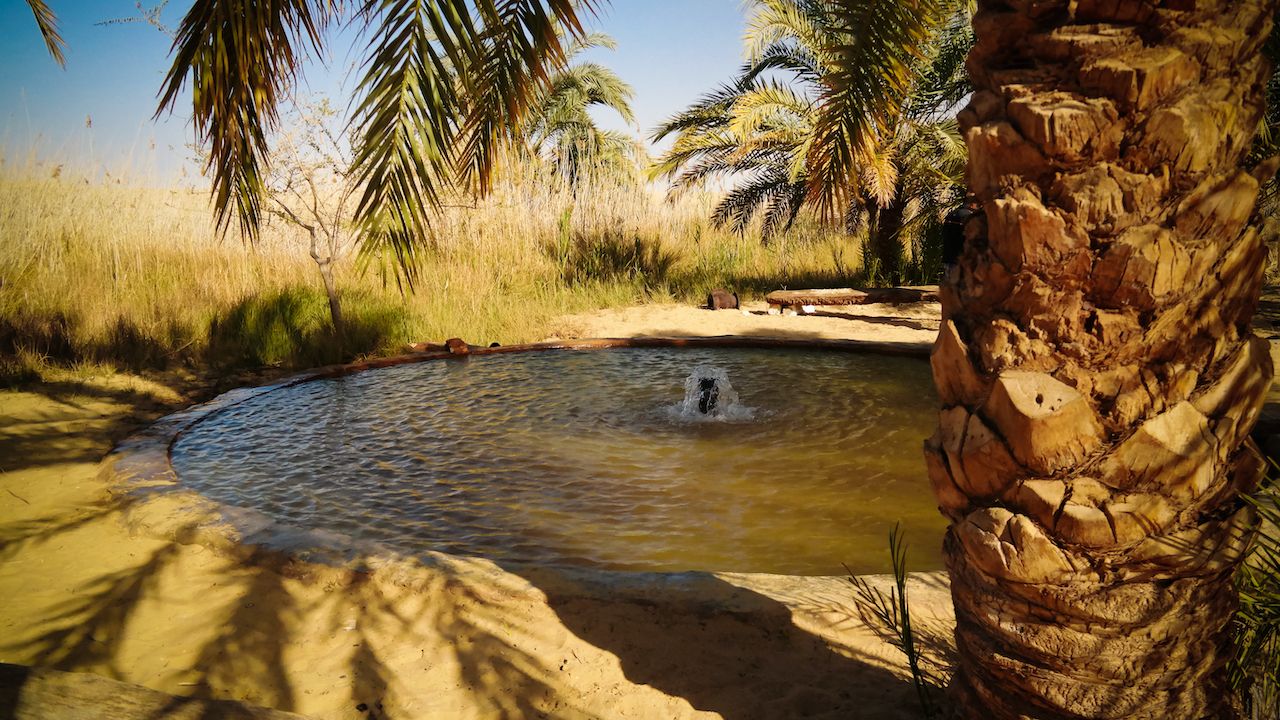 There’s no better way to wash off a long journey through the desert than a relaxing soak in hot sulfuric waters. As one of the largest groundwater reservoirs in North Africa, Siwa Oasis’s healing waters are bountiful. Most of the pools are set in very scenic locations, making swimming and soaking an unforgettable experience.

There are hundreds of natural springs in the oasis, but not all are active or accessible. Some of the more popular hot pools include Bir Wahed, Ali Khaled (also known as Mountain Camp Siwa), and Al Maza.

Bir Wahed is in the middle of the Sahara and necessitates governmental permission to enter, so it’s best to visit while on a desert safari. On the other hand, Ali Khaled and Al Maza are located close to the town of Siwa and easily accessible anytime. If you happen to visit at night, you’ll likely find yourself soaking under the light of a clear, starry sky with Berber music in the background.

Pay a visit to Africa’s largest exporter of date syrup 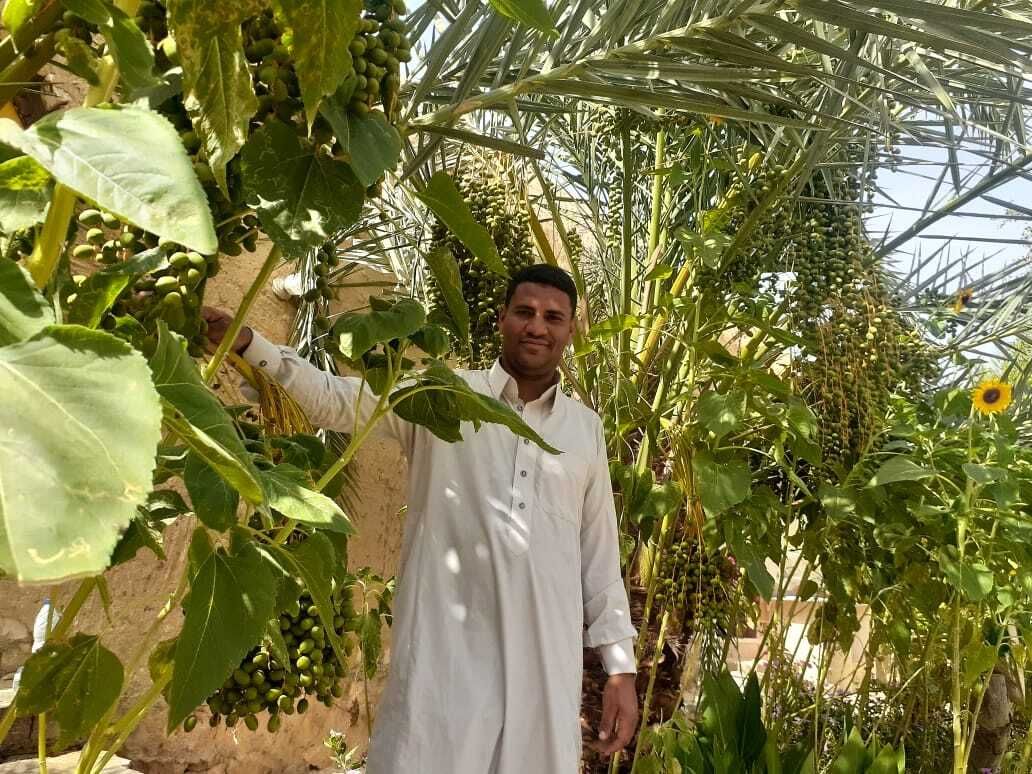 There’s a reason Siwa Oasis is known in ancient Egyptian as “Sekht-am” or “Palm Land.” Just minutes from the heart of downtown is Golden Siwa, Africa’s largest exporter of date syrup. Owned and operated by a Siwi Amazigh local, Youssif Sarhan, the factory processes over 14,000 tons of dates each year. Thousands of Siwi men and women participate in the harvest, which typically lasts four months, from September to December.

Visitors at Golden Siwa can get an inside peek at Sarhan’s syrup-making process and sample an assortment of his products, which are soon expanding to include local Siwan olive oil and pomegranate syrup.

Wander through the maze-like ruins of the Fortress of Shali 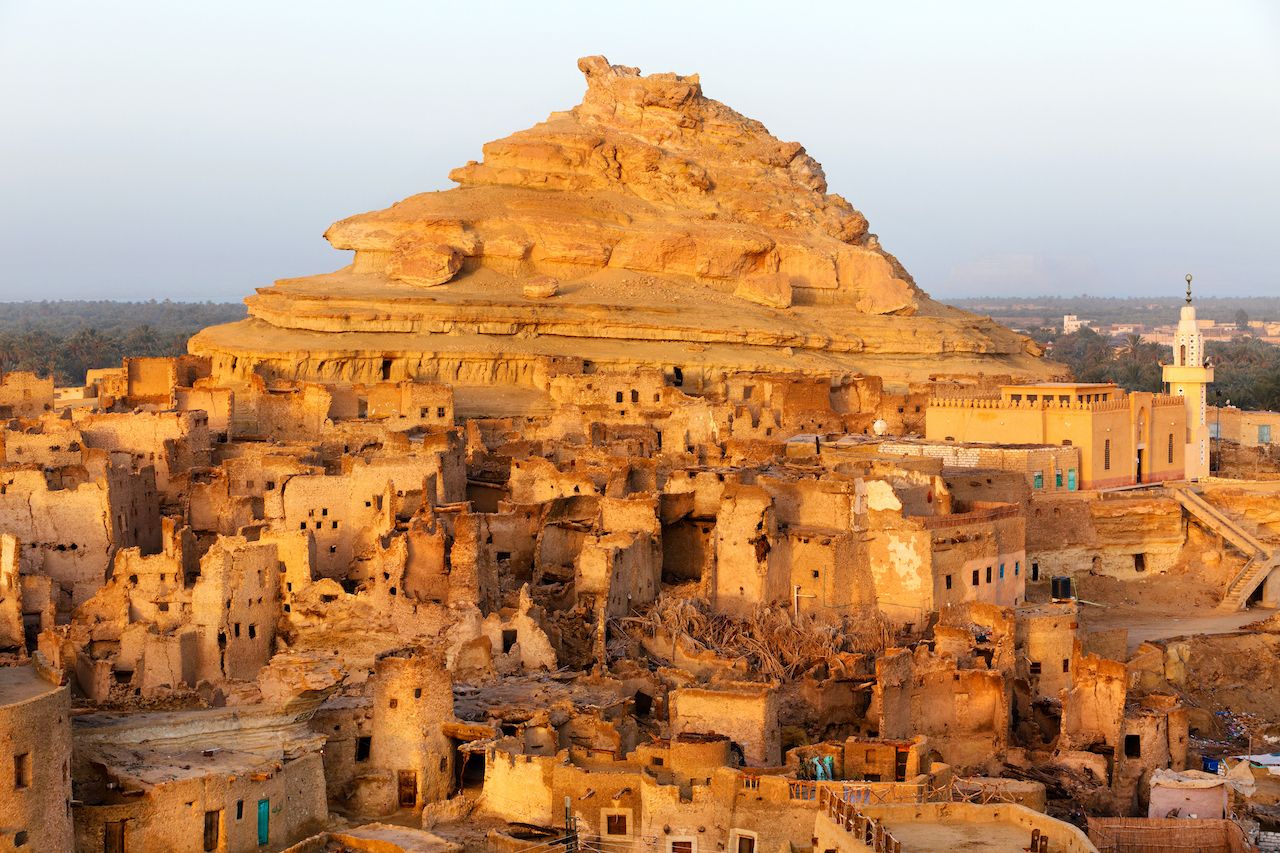 The Shali Fortress sits atop a hill at the heart of Siwa Oasis. Made entirely from ‘kershef’ (a material consisting of salt and clay), the fortress was built in the 13th century and served as the center of Siwan life for over 800 years. The fortress’ mosque is still in use today, with many of the homes restored, and some even turned into local guesthouses.

Wandering the winding pathways of this city is like stepping back in time. You can enter the fortress through its original gate, Bab Anshal, located adjacent to shops selling handcrafted carpets, salt lamps, and other souvenirs. A climb to the top offers incredible views of the city. It’s also one of the best places to watch the sunset.

Learn more about Berber history at the Siwa House Museum

Having inhabited the area for thousands of years, Siwis have developed a very distinct culture due to the oasis’s somewhat isolated position in the heart of Western Sahara. For centuries, Siwa’s only contact with the outside world was with caravan traders. Today, Siwa’s society still has little in common with mainstream Egyptian culture. Every day local traditions and Siwi, a local dialect of Tamazight infused with Egyptian Arabic, continue to dominate.

The Siwa House Museum is a replica of the traditional Siwan kershef houses from the Shali Fortress. The museum displays a collection of historical clothing, jewelry, pottery and artwork. It pays homage to the history and traditions of the local Berber people while showcasing how the adaptation of modern technology is changing the Siwan landscape.

Have fun in the world’s third-largest dune field 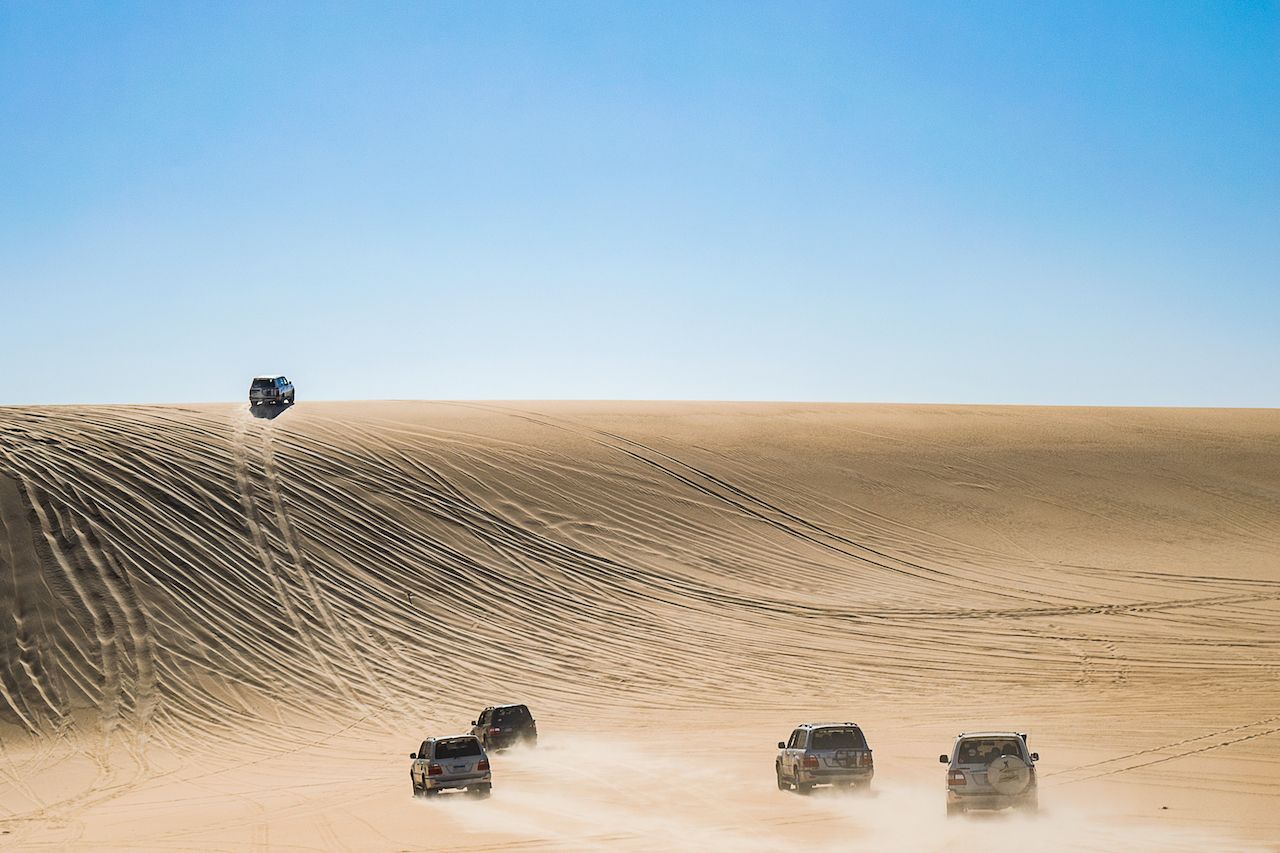 Known to locals as the Great Sand Sea, Siwa Oasis’s large expanse of ever-shifting sand is a sight like no other. The best way to explore Siwa’s rolling silica is by safari; an entire day spent driving up and down the legendary dunes, sandboarding, swimming in a secluded freshwater lake, and relaxing in the mentioned above Bir Wahed hot spring.

Most safaris also include a traditional Bedouin-style dinner featuring a cooking technique called “Abou Mardam,” where the food is slow-cooked underground. If you’re lucky, there will also be drums, dancing, and starlight like you’ve never seen before.

Enjoy some R&R at an eco-lodge 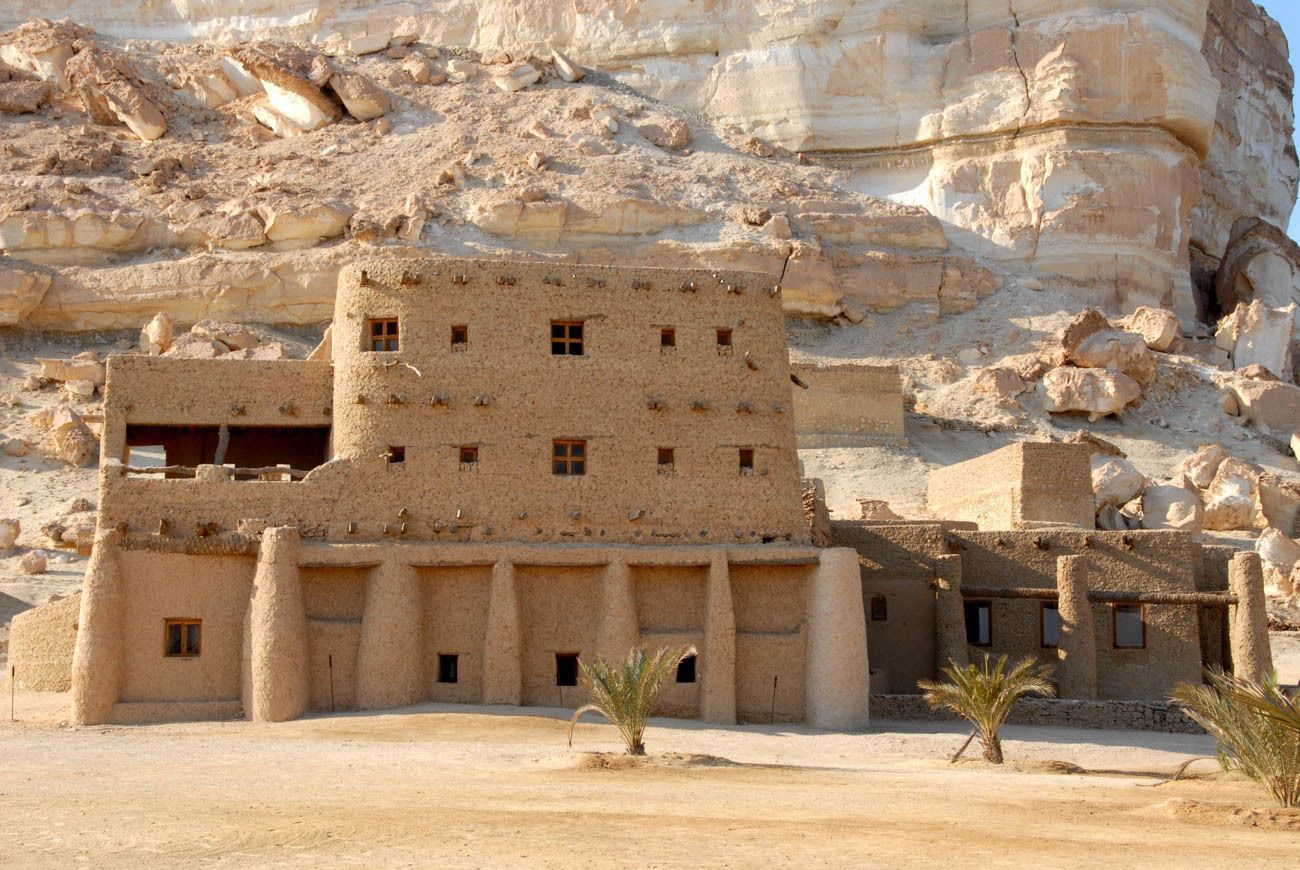 Perhaps one of the more miraculous things about Siwa Oasis is that it can convince even the most luxury-obsessed travelers that simplicity really is the ultimate sophistication. Many of the town’s lodges still run on candlelight, and day-to-day life is designed to embrace the natural elements. It’s also home to some of the most exclusive eco-lodges in the world, including the iconic Adrère Amellal and Taziry.

Siwa’s eco-lodges strive to preserve the natural beauty of the surrounding area, offering guests a unique opportunity to immerse themselves in the natural wonders of the oasis. Rooms are hand-built from kershef and olivewood, blending effortlessly into the landscape. On-site pools are fed from natural springs, and furniture and crafts pay tribute to talented local artisanship. At night, rooms are softly lit by a magical combination of beeswax candles and starlight from the desert sky.

Walk through ancient history at the Temple of the Oracle 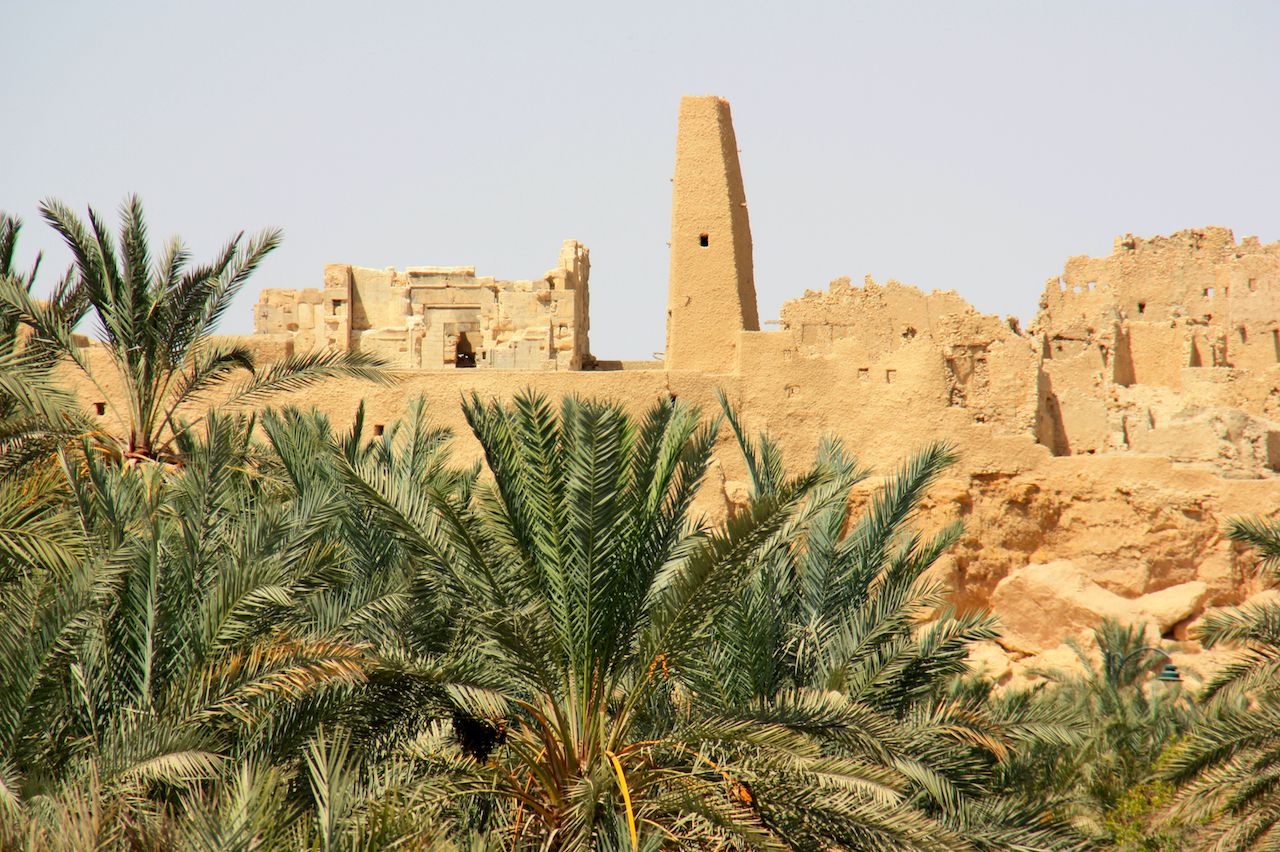 Also known as the Temple of Amun, this temple was famously visited by Alexander the Great. It was here that Alexander was told that he was a son of Zeus, which he used to strengthen his rule on the region.

Located on a hill, the Temple of the Oracle has stunning views over Siwa Oasis’s lush vegetation and salt flats, so it’s worth the climb to the very top.

Climb the Mountain of the Dead 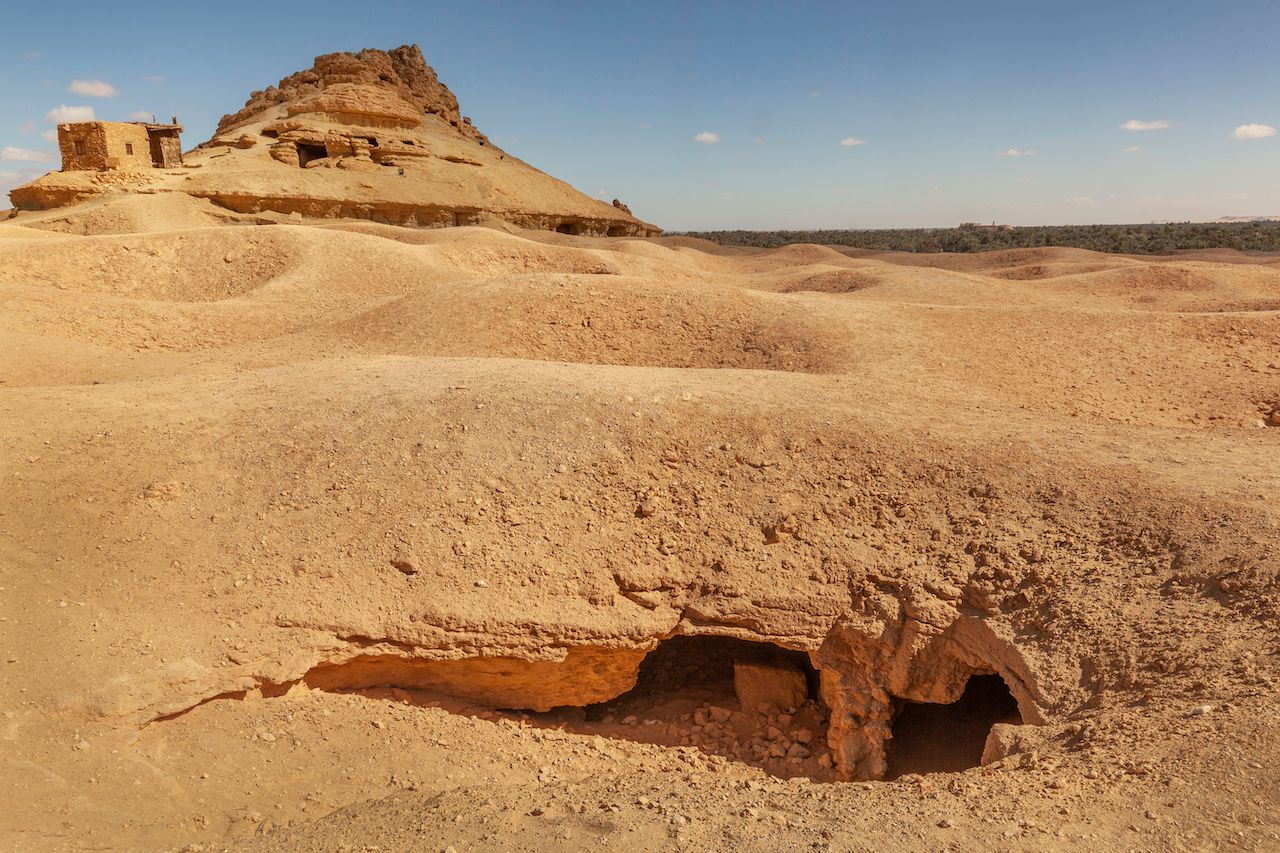 The Mountain of the Dead, or Gebel Al-Mawta, is one of the most important historical sites in Siwa Oasis. The mountain is home to tombs dating back to the 26th dynasty (664—525 B.C.). Carved from soft sandstone rock, the tombs cover the mountain base to peak, creating a striking cone-shaped burial ground that dramatically rises out of the surrounding verdant backdrop.

Walk into an Egyptian tomb

While visiting Gebel Al-Mawta, don’t miss the opportunity to go inside one of the tombs. There are four particularly famous rock-cut tombs on the Mountain of the Dead: Si Amun, Mesu Isi, Niperbathot, and the Crocodile tomb.

Inside the tombs, you will find painted chambers with alcoves where the mummies were laid to rest. The walls and ceilings are covered in shades of ocher, red, and cobalt blue and feature inscriptions about those buried inside. Si-Amun’s tomb is typically considered the most beautiful, dating back to the third century B.C. 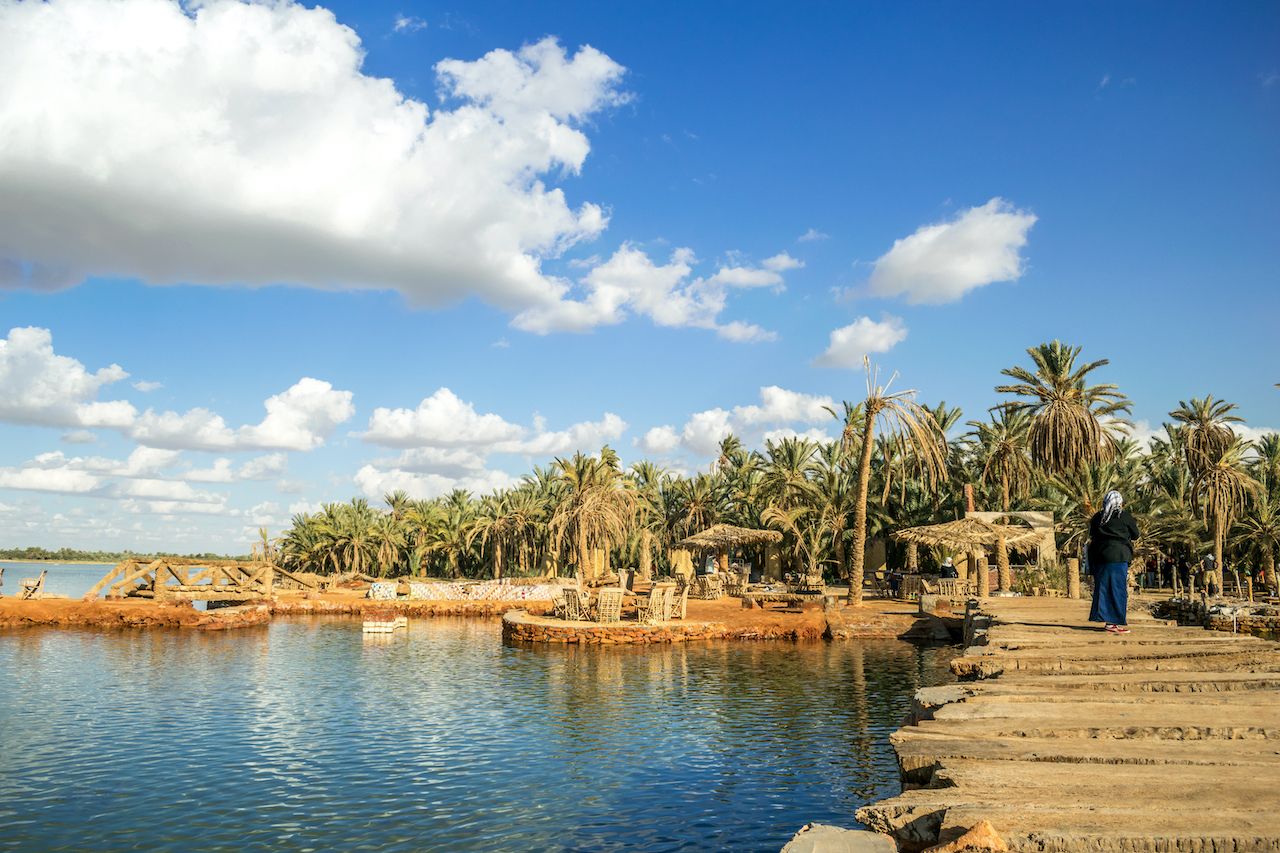 Desert sunsets are undisputedly some of the best in the world. There are numerous spots to watch the sunset in Siwa Oasis, but Fatnas and Taghaghien Islands are two of the best.

Located about three miles from Siwa town, Fatnas Island is a beautiful peninsula covered in palm trees. Nicknamed “Fantasy Island” for its idyllic setting, the peninsula is surrounded by the salt lake of Birket Siwa. There are also several cold springs on the peninsula, making it the perfect place to spend a hot afternoon.

Opposite Fatnas on the other side of Birket Siwa, you’ll find Taghaghien Island. With beautiful views of the lake, jagged sandstone hills, and the famous Taziry rock, Taghaghien is home to a natural cold spring 13-foot deep. The island also features its own eco-lodge, offering ultimate tranquillity and a traditional Berber atmosphere. It’s also significantly more affordable than the above-mentioned Adrère Amellal and Taziry lodges, so if you’re looking for a modest, secluded place to truly get away from it all, Taghaghien might just be for you.

Spend the day lounging in a treehouse at Ali Khaled Camp 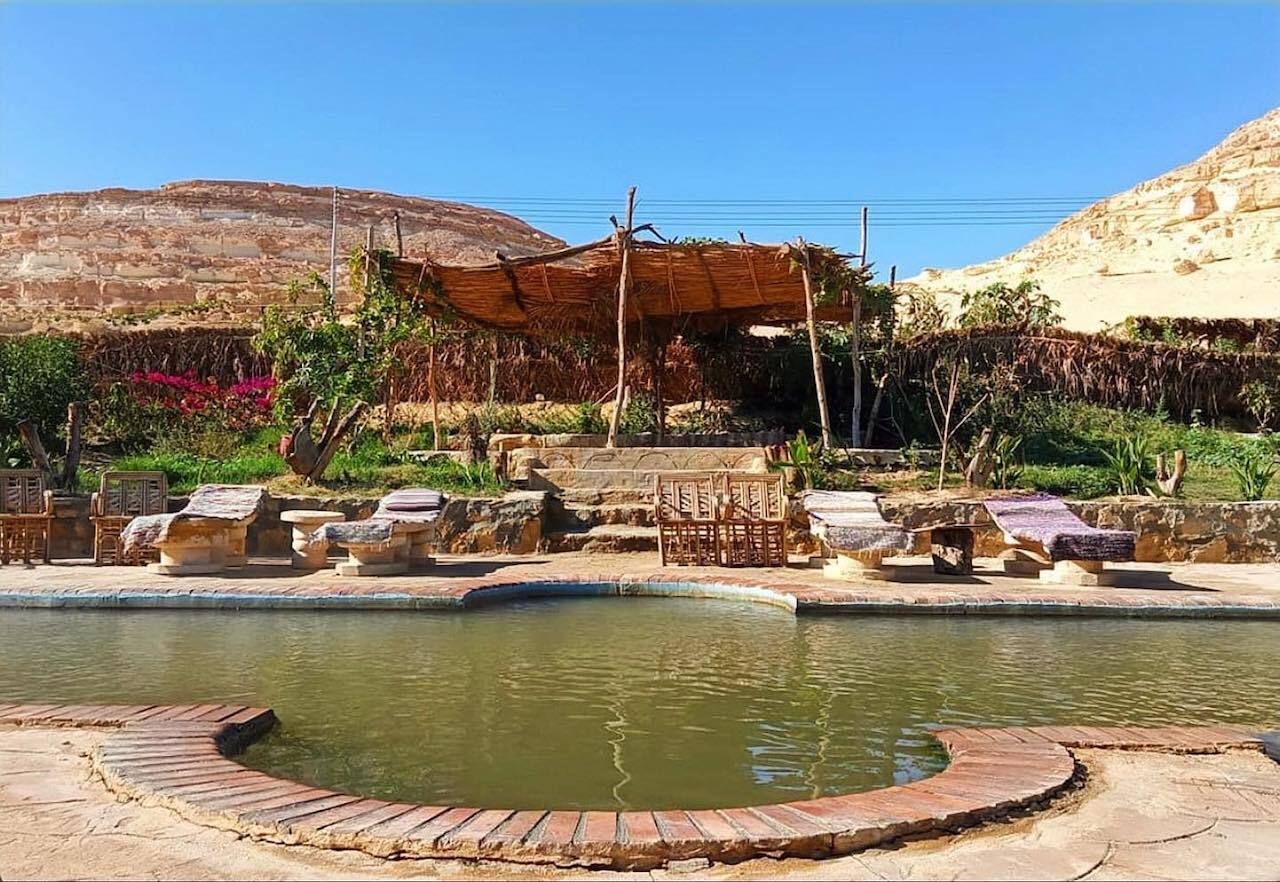 Also known as Mountain Camp, Ali Khaled lies at the foot of Dakrur Mountain amid a thick carpet of palm groves. Here, visitors can relax in a garden complete with hammocks, day-beds, and a treehouse. There’s also a hot spring and freshwater plunge pool, so you can alternate between lounging in the shaded canopy and soaking in the refreshing waters. If you’re in the mood for adventure, you can hike up the nearby Dakrur Mountain, known for its healing sand baths. The mountaintop is also an excellent spot to take in the sunset over Siwa town. 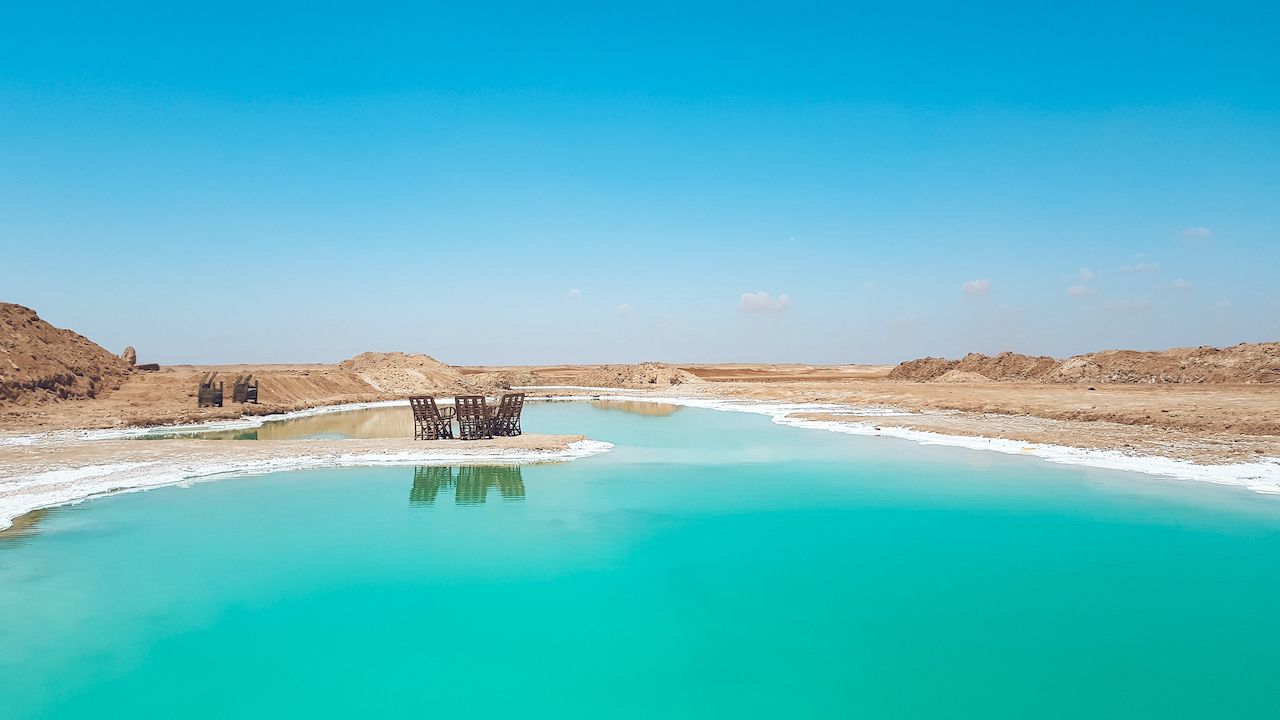 Siwa Oasis’s claim to Instagram fame is its salt lakes. Hundreds of crystal-clear blue salt lakes dot the desert landscape. Created by the excavation of salt, Siwa’s prime export, the lakes have a higher salt concentration than the Dead Sea. Visitors are welcome to enter the quarry and float in the mineral-rich waters.

Wash it all off at Cleopatra’s Bath 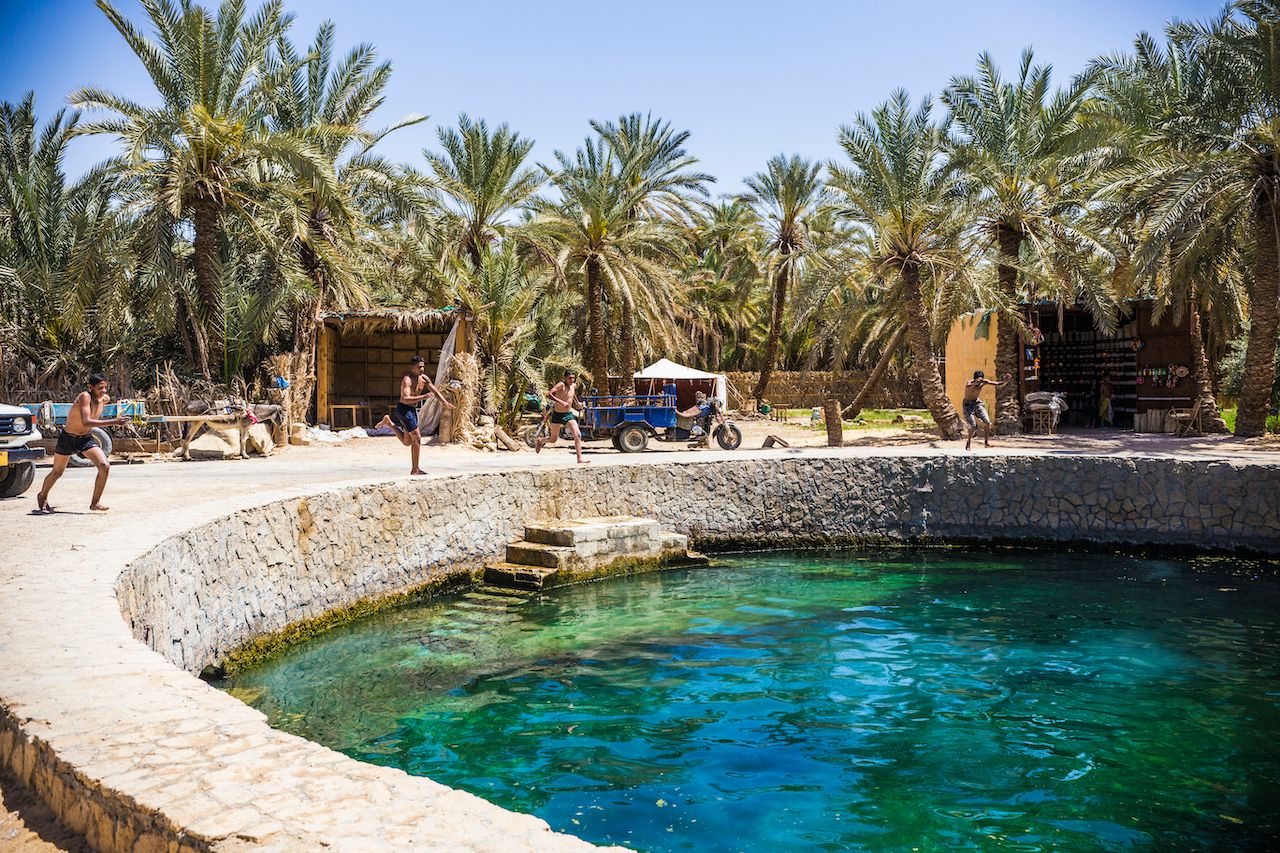 Perhaps the most famous spring in Siwa Oasis, Cleopatra’s Bath has crystal-clear natural water that gurgles up into a large stone pool. A popular bathing spot for locals, it’s surrounded by cafes selling fresh fruit juice and the locally famous “Siwan drink,” a beverage made of dates, honey, and milk. It’s also the perfect place to refresh after floating in the salt lakes, as the briny water tends to leave a thick trace of salt coating the skin.

Archaeology7 Underrated Sites in Egypt Worth Visiting, According To an Archaeologist
Tagged
Culture Travel Egypt
What did you think of this story?
Meh
Good
Awesome