Easter is celebrated differently throughout the Christian world. Some countries put on elaborated religious parades, others launch fireworks, and some create colorful art displays. In most of Britain, like in most of the US, modern Easter festivities are less associated with the resurrection of Jesus Christ than it is with children folk tales and chocolates — the now-ubiquitous Easter Bunny comes at night and hides sweet treats in the homes and yards of well-behaved children for them to hunt and eat in the morning. But in the northwest of England, some centuries-old traditions are preserved and there’s a little more to Easter than an imaginary rabbit and its sugary deliveries. Every year, on Easter weekend, people gather to watch Medieval plays performed on the streets and roll boiled eggs down grassy hills in a tradition known as Egg Pacing. 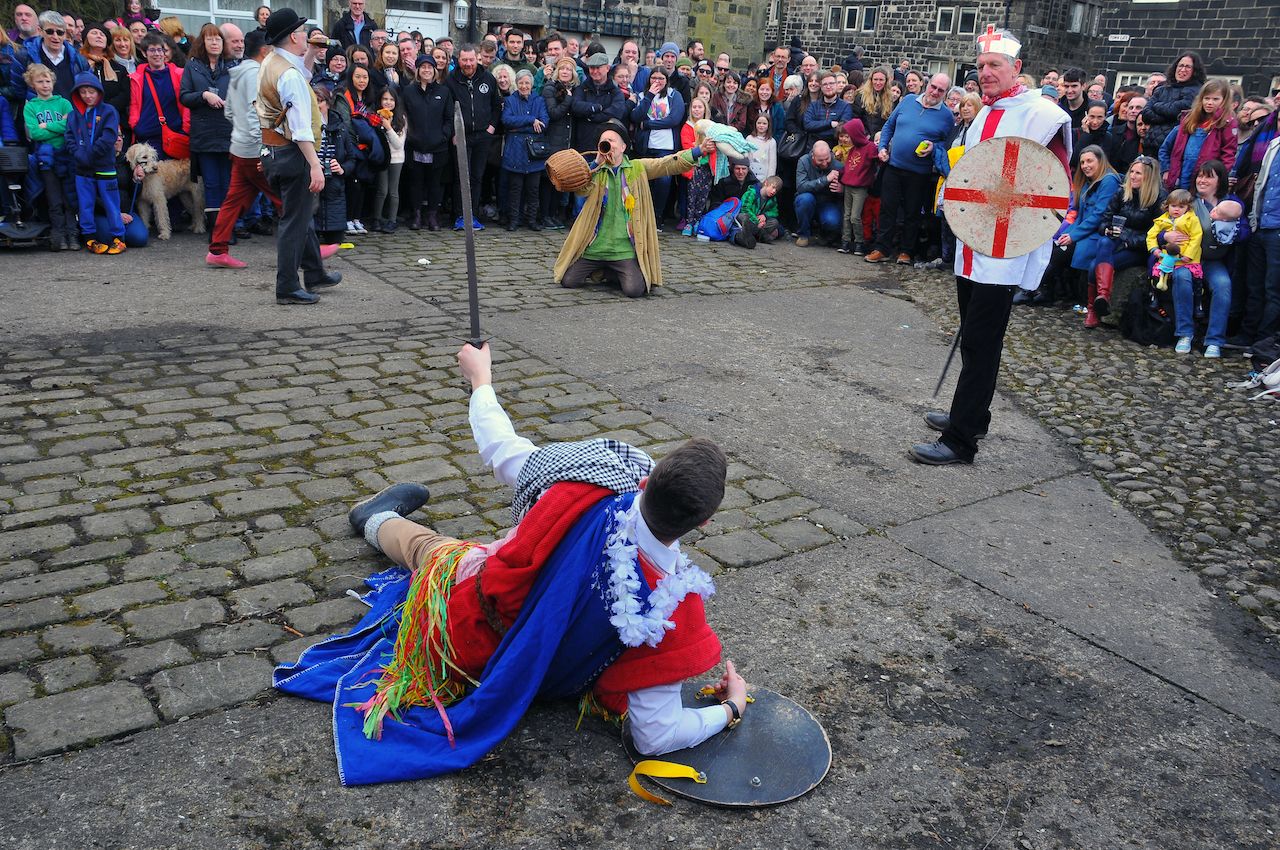 In Northwest England, mass is not the only entertainment available on Easter weekend. Every year, in rural villages in the historic counties of Cumbria, Yorkshire, and Lancashire, locals and visitors in the know come to watch the revived tradition of the Pace Egging Play.

The Pace Egging Play is a street performance akin to a pantomime with roots in the Middle Ages. While the costumed cast of the play differs slightly from village to village, they all feature the same central characters and plot: St. George, the patron saint of England, is involved in a battle against a foreign enemy. During the course of their slapstick sword fighting, St. George inevitably dies, only to be comically brought back to life by a doctor in an interesting take on the resurrection and the victory of good over evil. Other characters in the play include the Noble Youth, the Soldier Brave, and Toss Pot, a foolish personage donning a straw tail, who traditionally collected money, eggs, and just about anything people could spare as payment, in his basket before the performance started.

The practice of putting on a play on Easter weekend declined in the mid-19th century but was revived after WWII. Traditionally, the Pace Egging Play was a way for working-class locals (known as Egg Pacers) to earn money. They often reenacted the drama in several villages over Easter.

Although not as common nowadays as it a few hundred years ago, the Pace Egging Play is still famously performed in Middleton in North Manchester (on Easter Monday), Bury in Greater Manchester, and Heptonstall in West Yorkshire (both on Good Friday), according to BBC America, as well as in Alpson and Broughton in Furness, Cumbria.

Pace Egging is not all about theatre, however. “Pace” is derived from the Latin word “Pascha,” which means Easter, and the egg is a powerful symbol of fertility and birth – two themes that are strongly associated with the resurrection and the spring season.

To celebrate the egg and all it represents at this time of year, the people of England have been decorating them for centuries. Historic UK reported that references to decorated eggs date back all the way to King Edward I (13th and 14th centuries), and the tradition continues to this day. Traditionally, boiled eggs or empty egg shells were dyed with onion skins, but today they are often painted various hues and patterns, or colored with synthetic dyes. 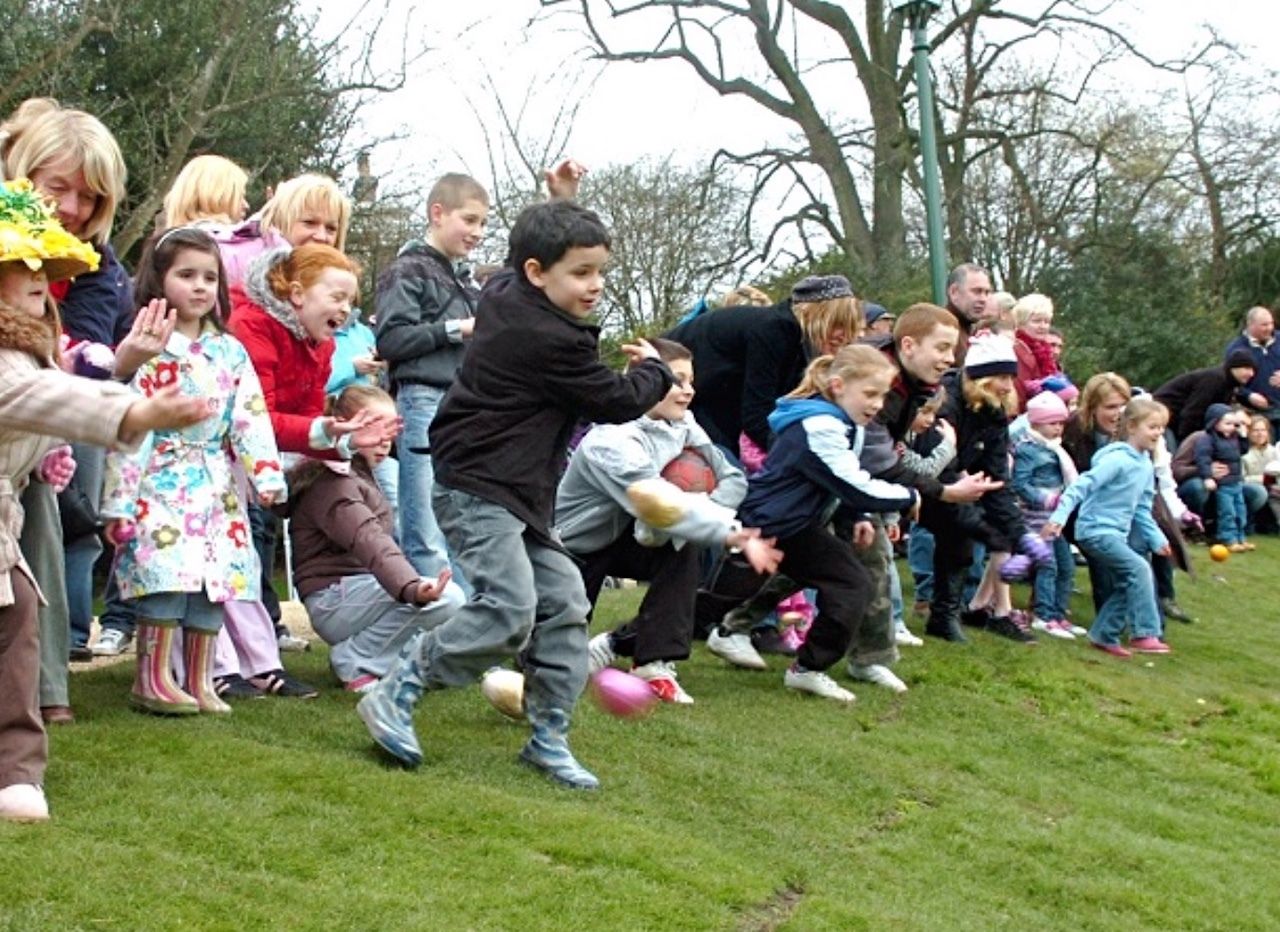 On Easter Monday in Preston, Lancashire, hundreds of families take their decorated eggs (known as Pace Eggs) and gather in Avenham and Miller Parks, like they have been doing since 1867, to take part in an egg rolling contest (though COVID has forced the cancellation of the event this year). Children set themselves up on top of grassy hills and compete with others to see whose beautiful boiled egg (or sometimes the chocolate version) will make it the furthest without cracking. Not breaking your egg was said to bring good luck. Legend also says that Lancashire witches would use the egg shells left on the hills as boats, so it was traditional for children to destroy them all before the end of the day. The gathering in Preston is the most famous of its kind and features workshops, live music, art performances of all kinds, and an Easter bonnet competition.

The tradition of rolling eggs may sound familiar to Americans, who’ve likely grown up watching the odd annual tradition of the White House’s Easter Egg Roll. Oxford Learner’s Dictionaries reported that the egg rolling contest likely made its way to the United States in the late 19th century thanks to Dolley Madison, the wife of President James Madison. The egg rolling contest originally took place during the Easter weekend “on Capitol Hill in Washington, DC, and later in the grounds of the White House.” COVID notwithstanding, the event still takes place yearly on Easter Monday on the South Lawn, and is one of the oldest annual events in White House history.