People have different definitions of what it means to be well-traveled. For some, it means a big portion of your time is spent exploring new places. To others, it simply means racking up passport stamps. Every drop of Linie Aquavit, a spirit from Norway, is well-traveled regardless of how you define it. In fact, all of the Linie sold since 1821 has seen more of the world than the vast majority of humans.

Before being bottled, Linie is aged in 500-liter barrels that previously held Oloroso sherry for a year. It’s then put on a ship that travels around the world, crossing the equator twice during the journey (hence the name Linie, which refers to the equator line). The barrel-holding ship stops at more than 20 ports of call along the way in more than 10 countries. It’s time-consuming and seems like an extremely inefficient way to barrel age a spirit. But it wouldn’t be Linie without the miles.

“Even if this maturation process sounds inefficient, we still do it today for two main reasons,” Romain Jourdan, a spirits manager at Linie’s parent company, Arcus Norway, tells me over email. “First, it is almost impossible to recreate these changing conditions during the four-month period. The fluctuating temperatures, changing levels of humidity, varying pressure, and the rolling movement of the oceans accelerates the maturation process.”

The barrels of Linie are stored on the upper deck of boats owned by the shipping company Wilhelmsen. Other deliveries are made along the way, and the aquavit is the only thing that is picked up and dropped off in the same port. Each cask is stored in ventilated containers on the deck, exposing them to the climate. This allows the aquavit to “absorb more taste and aromas from the wooden 500-liter Oloroso sherry casks than in a warehouse,” Jourdan says.

Distillers have long known that where a barrel of liquor ages impacts the final taste. Barrels of rum age faster in the hot and humid Caribbean than Scotland’s cool and moderate highlands, for example. Linie gets a little of both and everything in between. The company gave people a taste of what the barrels experience along the journey by putting them on a swaying stool and blasting them with heat, salt spray, and wind. For the aquavit, however, it would be difficult (if not impossible) “to recreate the same maturing conditions and the unique Linie taste,” Jourdan says.

There’s some science to that. In 2018, Popular Mechanics tested the chemical difference between barrels of whiskey that traveled by ship from Kentucky to New York versus whiskey that aged solely in the Bluegrass state. The publication found that the shipped liquor had more characteristics that we associate with longer aging times, like less floral notes and more coconut, vanilla, and wood notes. 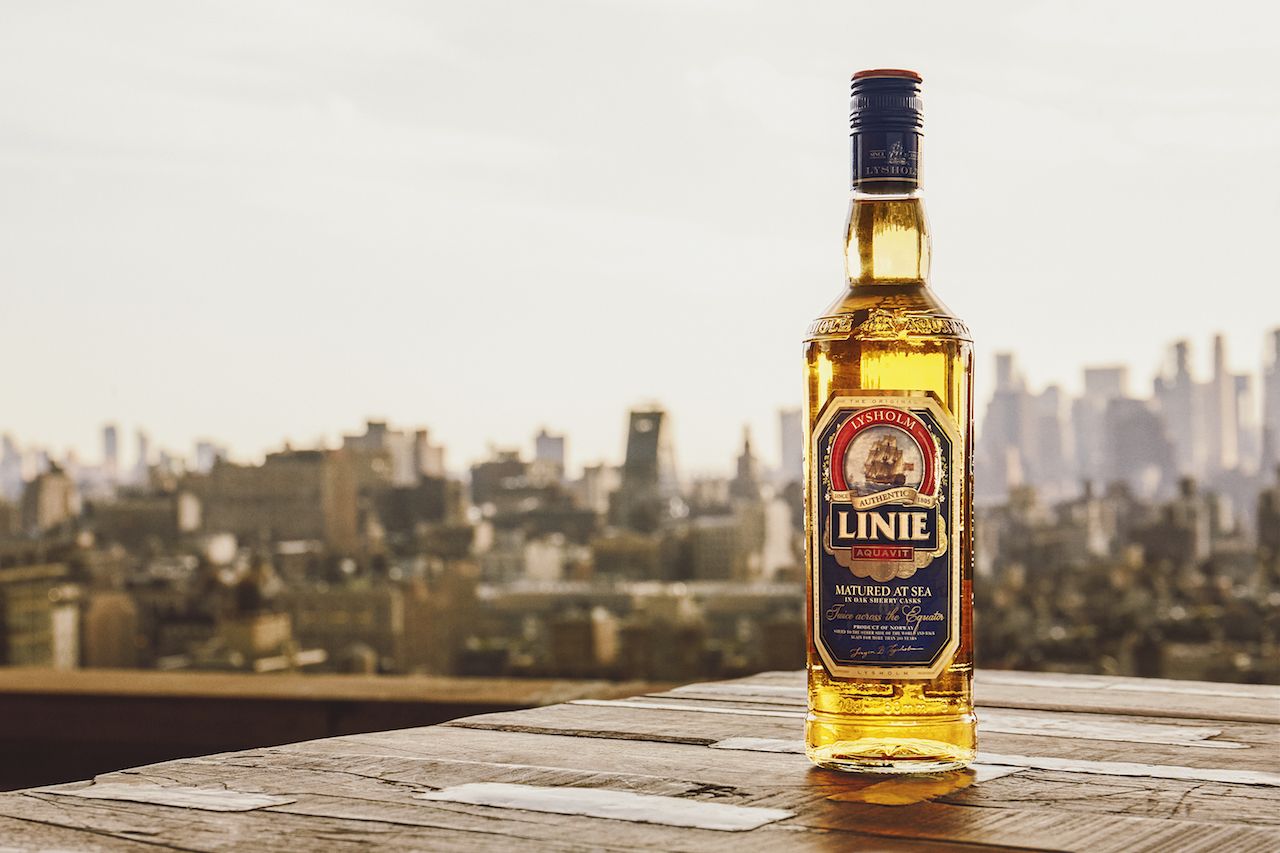 Along with the impact on flavor, the commitment to the sea also comes down to tradition.

It all started in 1805. Lysholm, a Norwegian trade family, shipped a barrel of local aquavit to the East Indies. No one wanted it, so the barrels were shipped right back to Norway. They weren’t going to let all that liquor go to waste. The ship-aged aquavit was tried when it got back to port, and it was a hit.

“Linie has been produced in Norway using the same original recipe since 1821,” Jourdan says. “And since that day, every single drop of Linie has been sent on a four-month sea journey across the world to mature, crossing the equator twice. The maturation at sea is a 200-year-old tradition; Linie Aquavit is one of Norway’s oldest brands and part of the Norwegian Cultural heritage, and Arcus, as the owner of the brand, has the duty to perpetuate this long tradition.”

Linie isn’t the only aquavit with history. The name comes from Aqua Vitae, which is Latin for “water of life.” It’s been made in Scandinavian countries since the 1500s. It can be made from grain alcohol, but in Norway, it’s distilled from local potatoes. Much like genever and gin, aquavit producers spice their spirit with herbs. Only, instead of juniper, the primary flavoring comes from caraway. It’s legally defined in the US as “caraway flavored distilled spirits product.”

It’s a broad definition, allowing for plenty of variation from brand to brand. Each region does it differently, from Norway’s potato-based aquavit to US takes like Skiklubben from New Hampshire and Krogstad from Oregon. Linie, however, is the only one sending its liquor around the world and back.

There’s just one problem with loyally sticking to tradition: all the doubters. In Scandinavia, ”most people have heard about Linie Aquavit and many have also heard about the Linie story of maturation at sea,” Jourdan says. “However, many think it is a marketing gimmick, or that we only send a small part of the production around the world, or that it was done in the past, not anymore.” 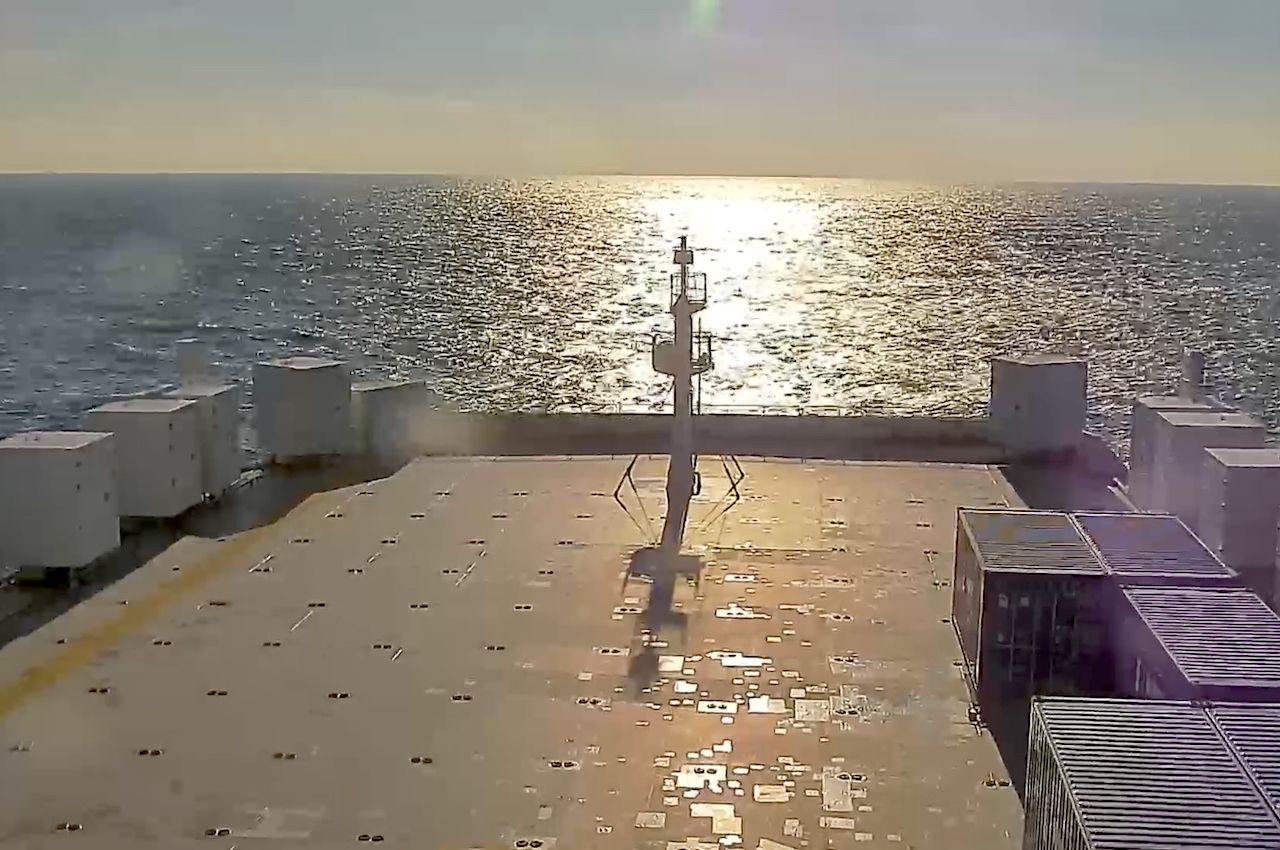 The doubt is understandable. On a trip to Oslo I took in 2015, a bartender walked my girlfriend and me through a series of aquavits, including Linie. When he told us the story about it traveling the world, I was skeptical. Maybe it was a translation issue, or maybe it was because it was the dead of winter in Norway, but the bartender’s explanation was paced more like Eeyore than Tigger, and I felt like I was being taken through one big marketing ploy. It would be a different experience today. To silence the haters, Linie is live streaming the entire four-month journey of some of the brand’s barrels.

From Oslo to Baltimore, through the Panama canal to Tacoma, and then off to Japan and Australia — you can follow it all. An accompanying map shows where the boat is and where it’s been (the equatorial crosses are near Singapore and Panama).

The video is a proof-of-visit equivalent to a modern human traveler’s Instagram posts. Only, every drop of this liquor travels farther than even some of the most well-traveled among us.