The beaches, surf, and culture of Bali have been attracting sun-worshippers for nearly a century. Yet most visitors to this Indonesian island still don’t venture further than the mainland, despite it being just a short boat ride from a number of other visit-worthy isles. Bali saw more than six million tourists in 2018. But the far less crowded islands of Nusa Penida, Nusa Lembongan, and Nusa Ceningan — just off of Bali’s east coast — are reminiscent of the serene Bali of decades ago. These islands offer stunning beaches, mellow vibes, and uncrowded surf breaks. Here is what to expect. 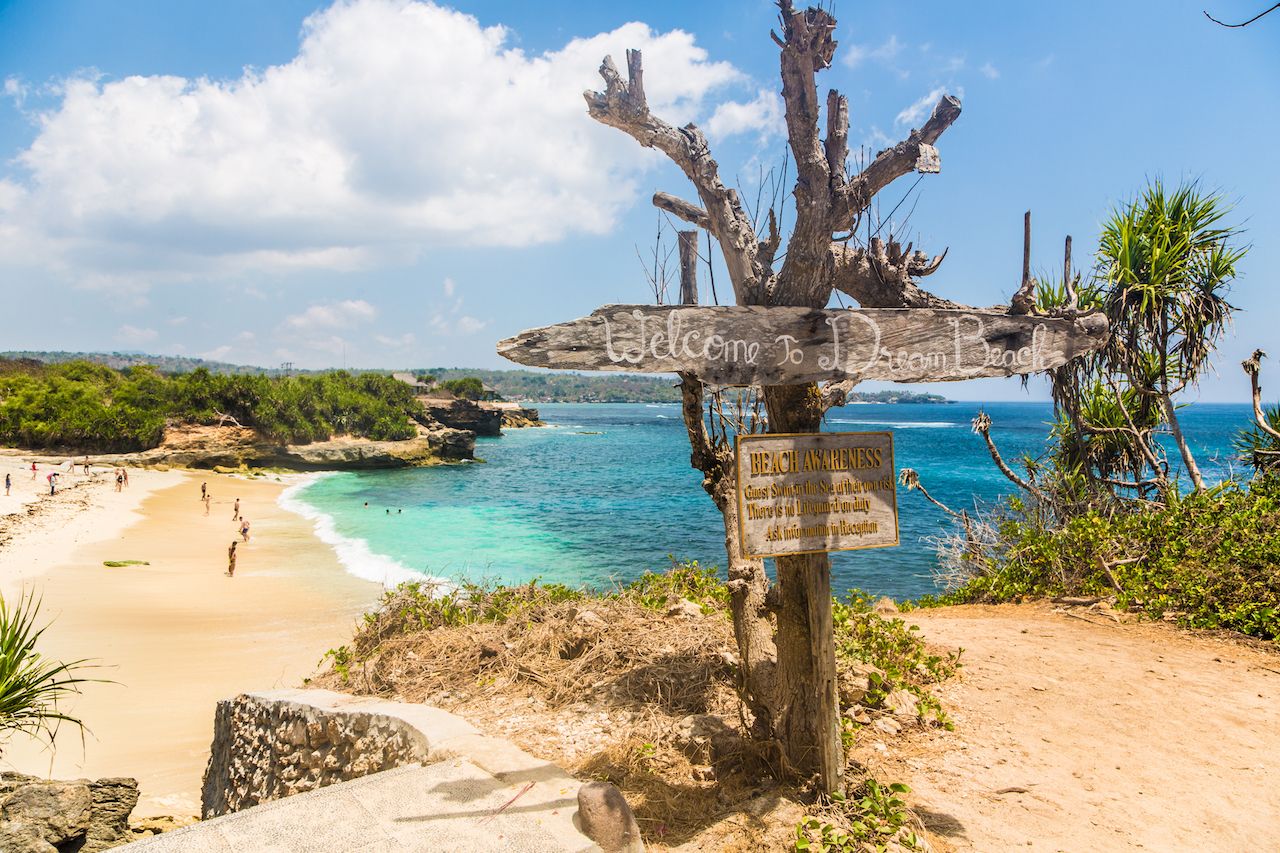 The second largest of the three islands, Nusa Lembongan is a far cry from the hectic pace of Bali’s tourist enclaves. Rich marine life and healthy coral await, making Nusu Lembongan ideal for divers and snorkelers. The two beaches that attract most of the visitors are on Lembongan’s northwest coast. They’re Jungut Batu, the longest stretch of sand on the island, and Mushroom Bay, a quaint white-sand cove with beachside warungs, or small restaurants.

These two beaches are certainly worth a visit, but you want to spend most of your sun time on the powdery white sand of Dream Beach — or on the cliffs overlooking it — on the southwestern part of the island. Just to the north is a narrow stretch of sand fringed by limestone cliffs and a picturesque cave that emerges at low tide known as Sunset Beach or Sandy Bay Beach. Sitting between the two beaches is Devil’s Tear, a rocky outcrop that spouts out water, or, as the locals would have you believe, the tears of the devil.

Nusa Lembongan is about much more than beaches, however. The north and west of the island are covered by mangrove forests, which you can explore in jukungs, small outrigger boats manned by “gondoliers” who steer them through the narrow canals. The island is also famous for seaweed farming, which can be observed off the cliffs on the southwestern coast of the island. Seaweed is also commonly dried in front of homes on the northern side of the island.

There are three main surf spots on the island, all located near Jungut Batu beach on the western side. You’ll reach these by paddling out from Coconut Beach. A spot that is perfect for beginners is Playgrounds, which has mellow take-offs, short right-handers, and longer left-handers. Accessible by boat, Lacerations consists of small to medium swells with long right tubes. The third break is called Shipwrecks and is also accessible by boat. Here you’ll find world-class right-handers that should only be attempted by experienced surfers.

As with surfing, Nusa Lembongan has three main diving locations. Lembongan Bay is ideal for beginners because of calm conditions and a maximum depth of 10 meters. The area is peppered with coral bommies, or outcrops, which are home to frog fish, eels, and silversides. Blue Corner is the spot for more experienced divers and features overhanging terraces and dramatic 50-meter drops. You may see snappers, jacks, and the occasional mola mola as you push through the water. On the northeast end of the island, Mangroves is a coral reef with small bommies suitable for all divers. 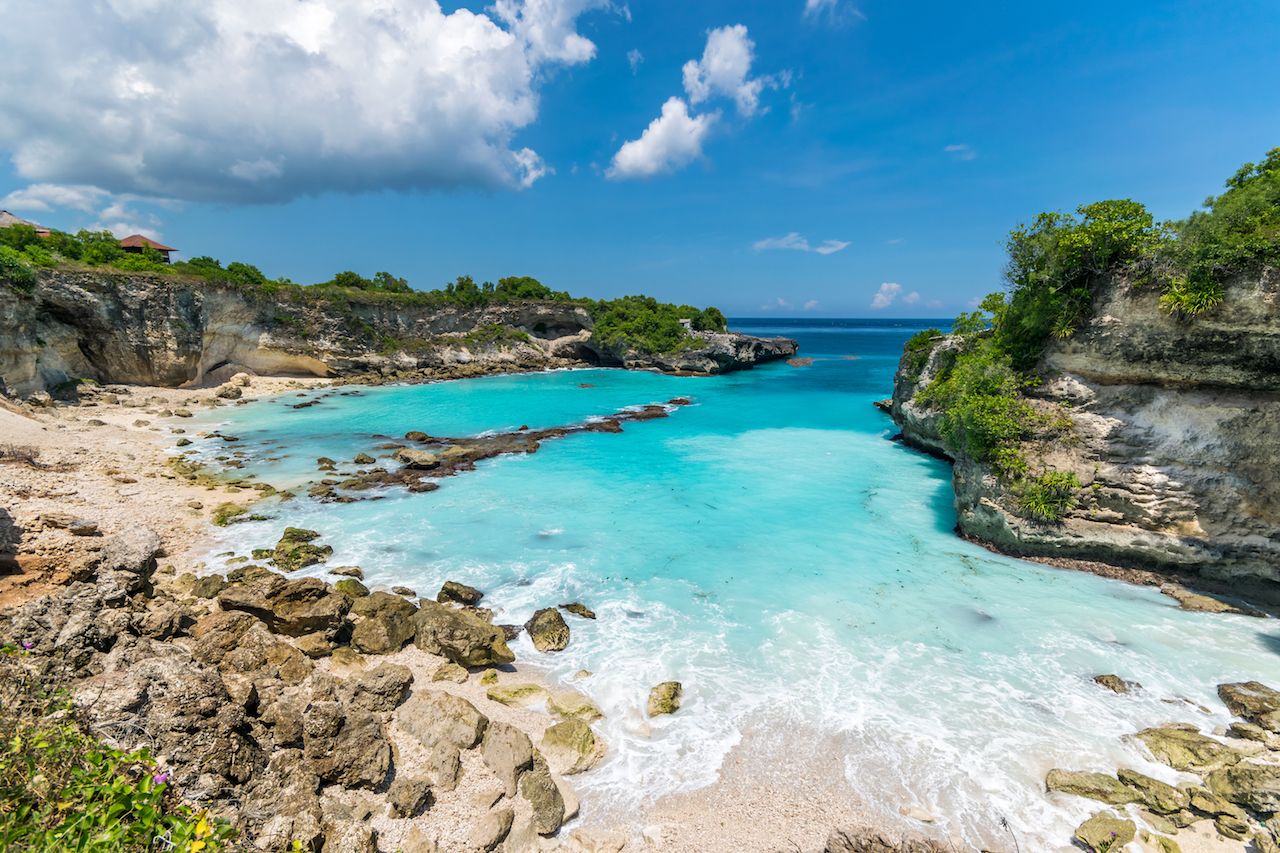 Nusa Ceningan is the smallest of the three islands and is located in between the other two. It’s accessible from the southeastern side of Nusa Lembongan via a yellow suspension bridge, which is a landmark in its own right. The bridge collapsed in 2016, killing nine people and injuring many others. It has since been rebuilt and named the Bridge of Love. Once you arrive on the island, be ready for cliffs and mangroves galore, along with stellar views of the larger Nusa Lembongan and even Bali beyond. The islet currently has only a handful of hotels and restaurants, though it’s slowly gaining popularity.

The first stop for most visitors to Nusa Ceningan is Blue Lagoon, a rocky cove with an impressive view of waves crashing into the shore below. There used to be a cliff jumping point here, but it has recently been closed due to safety issues. Adrenaline junkies can still cliff jump from Mahana Point, a small bar that doubles as a cliff jumping point on the southeastern side of the island. If you’re looking to relax instead, pack a meal and take a dip at Secret Point Beach. There’s a small cave for after-dinner explorations. Among the half dozen or so lodging options, Ceningan Island Resort stands out for its zip-line, which lets you glide between cliff points. Ceningan Point on the southwestern part of the island is a surf break known for its exposed left-handers. 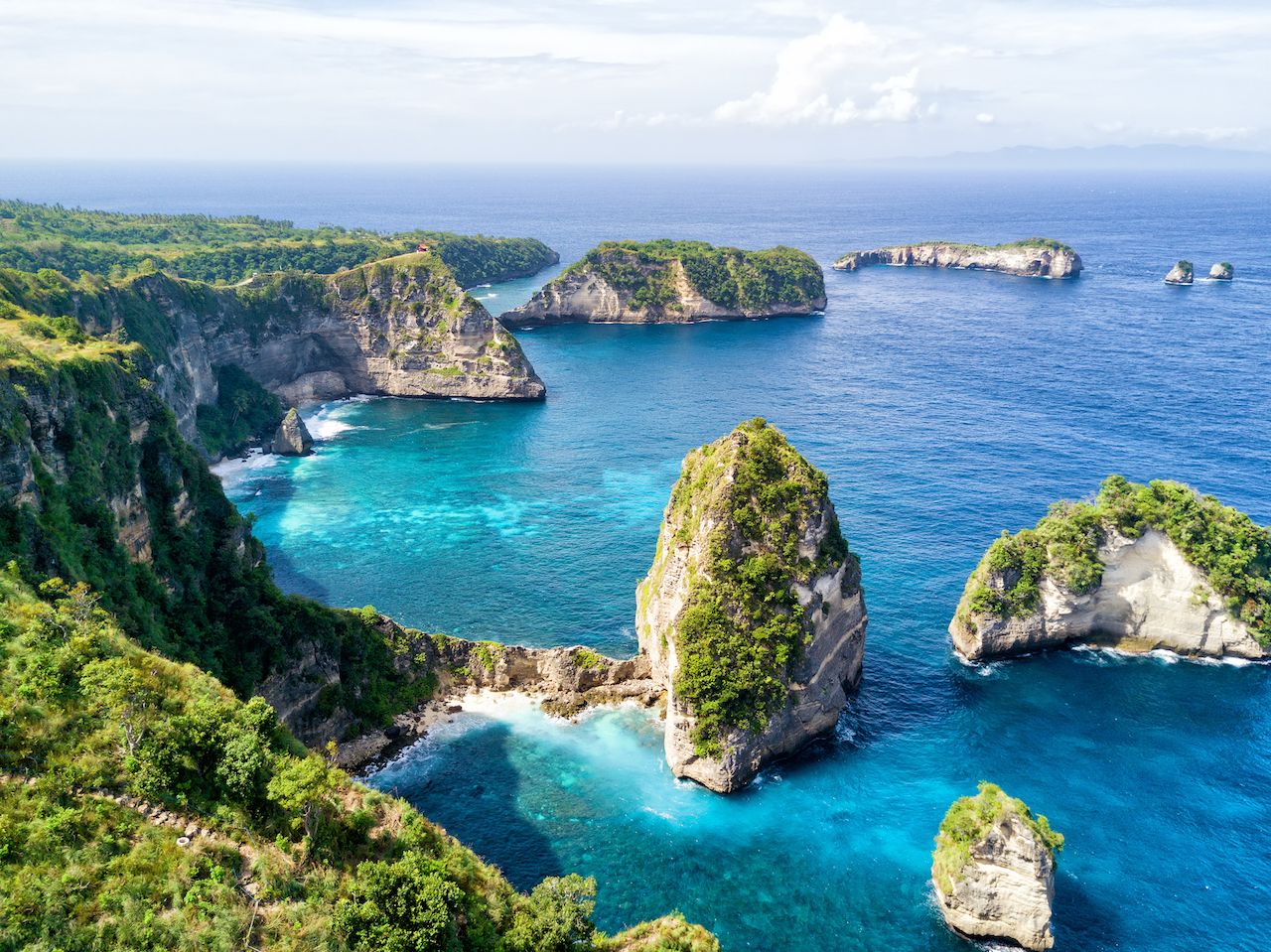 By far the largest of the trio of islands, Nusa Penida is most famous for Kelingking, a T-Rex-shaped rock formation on its western coast. The most Instagrammable shots of the site are taken from a viewpoint towering over a secluded white-sand beach. If you’re game enough, hike down the steep path to enjoy the powdery sand and crystal clear water below. Just to the north is a natural rock pool that opens out onto the ocean, known as Angel’s Billabong. The neighboring Broken Beach, which is dominated by the remains of what was once a massive cave, overlooks an arched tunnel in the cliffs that feeds water into Angel’s Billabong.

Like the other two, Nusa Penida is also known for world-class diving. The rather unimaginatively named Manta Point, on the southwestern side of the island, is a great spot for getting close and personal with the area’s marine life. North of the island, Toyapakeh has great visibility and virtually no currents. The area is home to reef coral formations including gorgonians, along with sea turtles and colorful schools of fish. Crystal Bay is the best location around Bali to see mola mola swimming through the healthy coral close to the beach, and a huge variety of fish including trumpetfish, rainbow fish, and unicornfish. 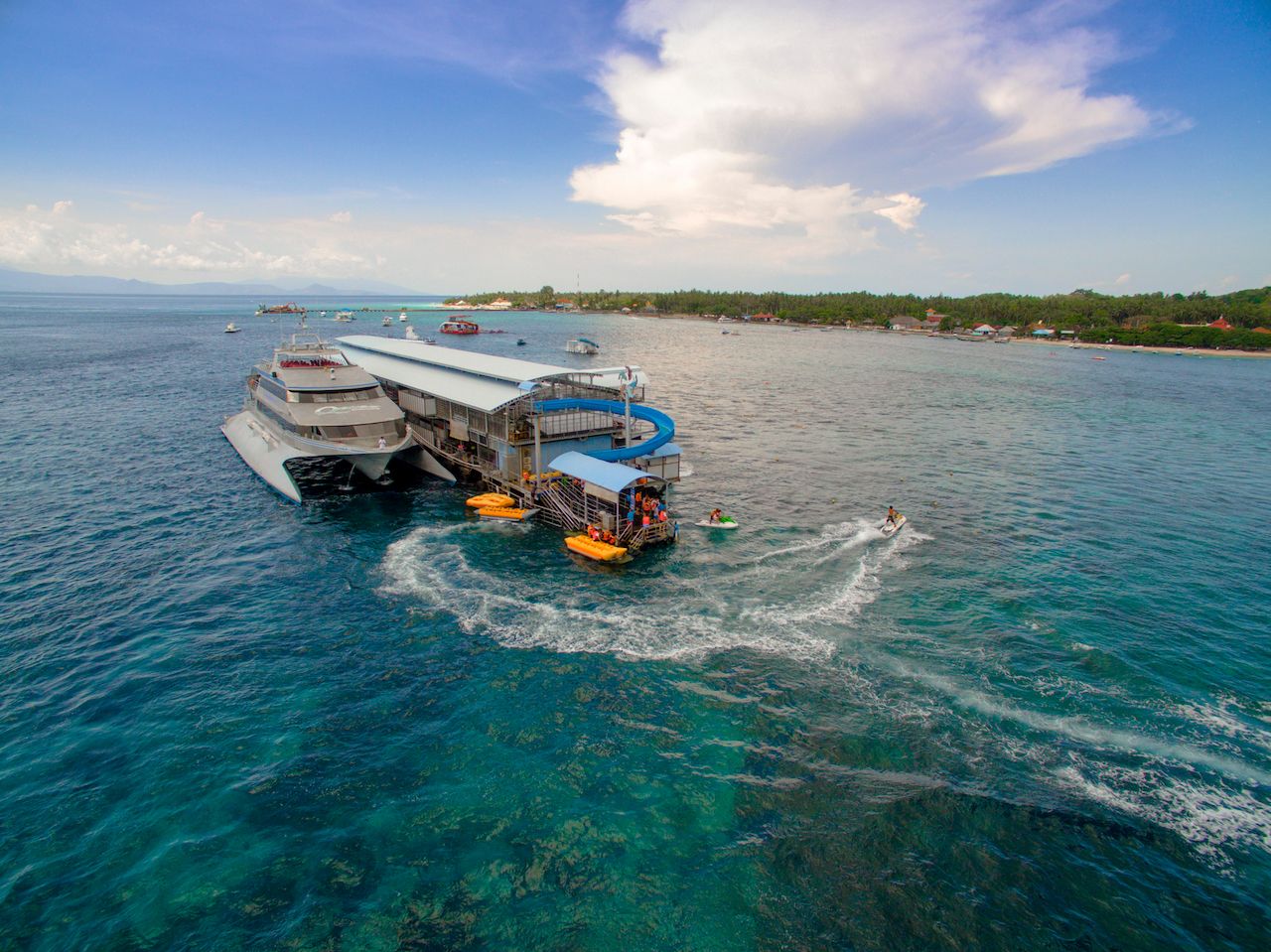 The cheapest way to get to Nusa Penida and Nusa Lembongan is by hopping on a public boat in Sanur, at the end of Jalan Hang Tuah. The journey takes around 90 minutes. Multiple operators also offer speedboats that ply the same route and take around 30 minutes to reach either destination. Multiple companies operate passenger boats to the island multiple times per day, with prices ranging from $30 to $50 USD.

CultureWatch: Makepung and the Fascinating Culture of Balinese Buffalo Racing
Tagged
Beaches and Islands Insider Guides Bali, Indonesia
What did you think of this story?
Meh
Good
Awesome

Feel Like You're Floating Above the Clouds at This Munduk Airbnb