New York City’s newest form of transportation looks like something out an advertisement to tour Italy by Vespa. Revel, an app-based electric moped rental company, has covered the streets of Brooklyn and Queens with Mediterranean-blue moped scooters that are equal parts convenient, fun, and yes, risk.

Revel’s mopeds are somewhere between scooters and motorcycles. The mopeds reach up to 30 miles per hour and are street legal, but you can’t take them on highways or major bridges. You don’t need a motorcycle license or any previous motored two-wheel driving experience, but you do need to be 21 or older with a valid driver’s license and a (relatively) clean record. Their larger size means they can’t be piled up on some corner, like the Bird scooters out West. Yet there’s one quality that makes Revel more like a bike share than anything else: all it takes is $19 and about a 15-minute verification over the app to start.

It’s easy to be a little taken aback by the simplicity of it all. I picked one up after brunch in the DUMBO neighborhood of Brooklyn on a recent summer day. My friends and I spotted them outside the restaurant. Next thing we knew we were ignoring the scrapes up the side of the helmets and jumping on. Start to finish, it took about 20 minutes before we were cruising the streets as if we were in a Brooklyn remake of Roman Holiday.

How to ride a Revel moped 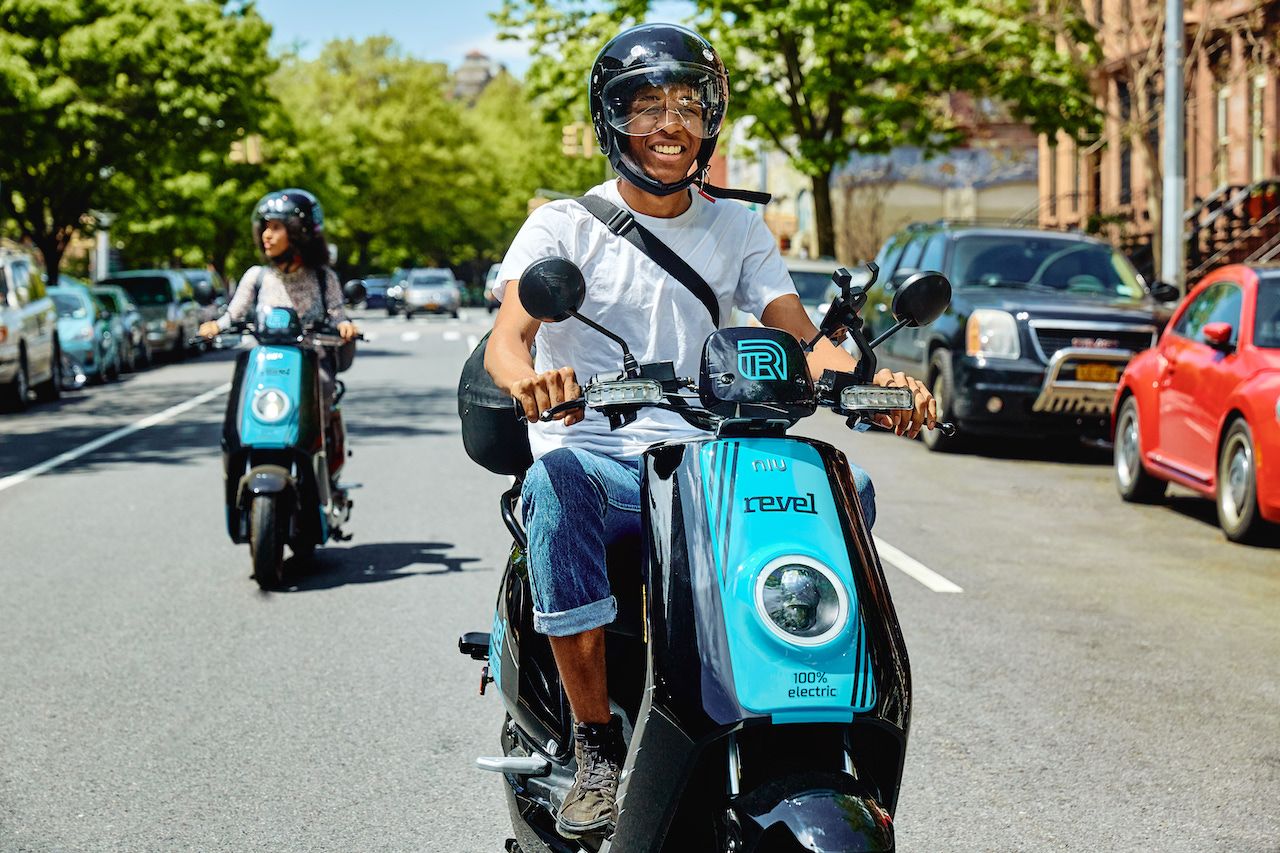 Finding a moped is easy. All you have to do is select a Revel on the in-app map. You can either reserve it 15 minutes ahead of time or book it right then and there. The reservation allows you to take your time walking to the moped’s location before it’s scooped up by another rider, but I’ve had multiple instances over the past month and a half where the one I reserved wasn’t where the app said it was.

Each ride is $0.25 a minute while riding, and $0.10 a minute when you pause your ride. There’s also a $1 fee to start for one rider, and $2 for two riders. There’s a 40 percent discount for anyone on public assistance programs. From my experience, the cost is a couple dollars more than taking the subway (and a lot less walking), but a couple dollars less than taking a rideshare like Uber or Lyft. Each Revel has a range of 60 miles, and the company monitors the mopeds and swaps the batteries whenever they get low.

The first minute on the moped is free so you have time to adjust your mirrors and put on the remarkably clean helmets locked in the cargo hold (apparently they clean them “every few days,” but Revel wouldn’t substantiate that for us). Then you’re good to go.

The first ride is the hardest because it’s far too easy to underestimate how touchy these mopeds are. Once you get that down, however, it’s similar to riding a bike that goes 30 mph. Top speed is right in that balance of fast enough to keep up with other vehicles in the city’s notorious traffic yet not so fast you feel like your life is in danger.

The mopeds have to be parked by backing into a spot on the street in a legal parking spot. Watch out for street cleaning days and which areas are restricted — it’s harder than it sounds for anyone unfamiliar with parking in NYC. The last person to ride the moped is responsible for any tickets or fines for 24 hours after parking though your responsibility ends as soon as another rider rents the moped. In late June, the company told The Verge, each of the 1,000 mopeds averaged six rides per day. 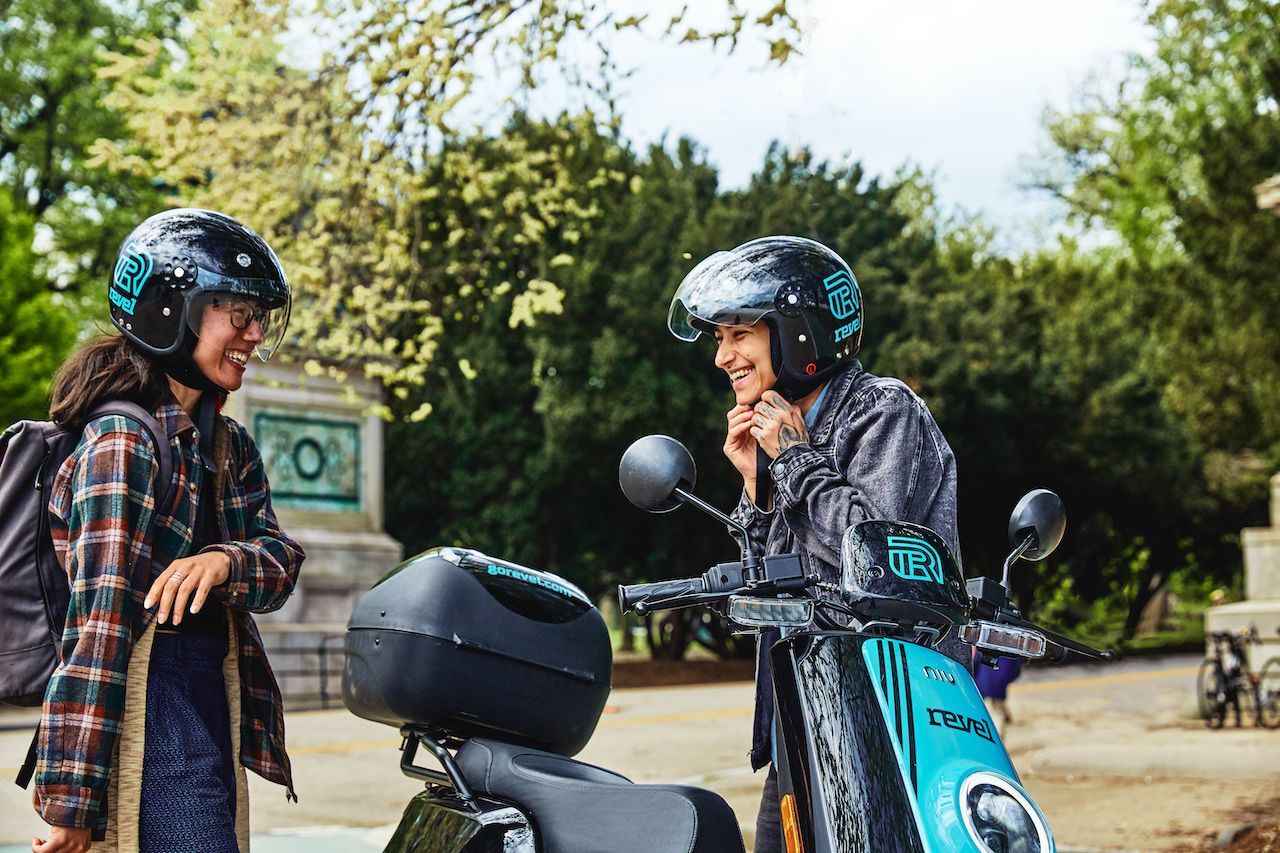 I reached out to Revel through the brand’s contact page with questions about safety. I received a call from a public relations company shortly after wondering what the story was about and then an email with a standard fact sheet that avoided the questions.

Perhaps the company has reason to be defensive. The New York Times wrote that it’s alarming how easy it is for people to rent and drive. Vice went with the headline, “Revel Mopeds Won’t Fix the Transit Crisis and Might Get People Killed.”

Then there are the statistics. According to the New York City Department of Transportation, two percent of registered vehicles in the city are motorcycles, yet they account for 14 percent of traffic fatalities. Comparing a motorcycle to a Revel isn’t perfect, but it’s not exactly apples to oranges, either (New York classifies the mopeds as “Class-B limited-use motorcycles”). The majority of motorcycle fatalities were on city streets, not highways, and 43 percent of fatalities involved a rider who wasn’t properly licensed to drive it. If you’d rather think of Revel’s mopeds as closer to bicycles with a little more umph (despite not being able to ride in bike lanes), it’s not great either. New York City is in the middle of a bicycle death crisis with 17 cyclists killed since the start of 2019 and riders staging “die-in” protests in Washington Square Park with a goal of securing better regulations.

Anecdotally, the most dangerous part of using Revel is other drivers. I’ve had cars cut in front of me and slam on their brakes, people jaywalk without looking as I swerve around them, and cars suddenly make turns in front of me without using their blinkers. While I’ve never been in a moped accident in the 15-plus rides I’ve taken, I’ve ridden plenty of mopeds with crash marks and have had to use the moped’s loud horn more than I’d like to admit.

Revel didn’t get back to me regarding questions about the city’s already overcrowded streets, issues with parking and driving tickets, and backlash against people parking in no-park zones. The company also refused to answer a question about what Revel’s responsibility is to first-time riders from a safety standpoint.

Avoidance aside, it’s not a total free-for-all. Each moped is safety certified by the US Department of Transportation and registered with the New York Department of Motor Vehicles. There are two helmets, one large and one small, and the mopeds and user are insured with third-party liability insurance for up to $50,000. Revel offers driving lessons though they’re not required.

Riders are out in the open, so it’s not as safe as a car. Overall, though, the vast majority of rides don’t feel unsafe.

Where you can ride Revel in New York City

There are 1,000 mopeds on the streets of Brooklyn and Queens. In Brooklyn, the service area reaches the top of Greenpoint to the north, the edge of Bushwick to the east, down to Industry City in the south, and along the waterfront of Dumbo, Brooklyn Heights, and Red Hook. Service is limited to Astoria, Sunnyside, and Long Island City in Queens. Operating hours are 5:00 AM to midnight.

Each Revel is tracked by GPS. If a driver goes out of the allowed service area, the company states in a fact sheet that they will “get in touch with riders to tell them to turn around.”

Bridges and highways are forbidden — including the bridges that connect Brooklyn and Queens. Despite the restrictions, there are few better ways to get around in the boroughs, both of which lack subways for people who want to go north and south.

NewsBird Scooters Have Taken Over LA and SF and Are Headed To Your City Next
Tagged
Technology + Gear Travel New York, NY, United States
What did you think of this story?
Meh
Good
Awesome