There likely isn’t an American today who doesn’t have at least a passing familiarity with sandwiches. Some of us ate them growing up, while for others sandwiches are a staple at office lunches and a recurring theme at breakfast. There’s a fair argument to be made that the sandwich is a national obsession in the United States. Which perhaps makes it easier for Americans to relate to another country with a sandwich obsession: Poland.

In Poland, open-faced sandwiches are called kanapki (or kanapka when you’re talking about one). Though you might not be blamed for assuming this dish is similar to a light snack — after all, the name comes from canape, the French word for a small, bite-size appetizer — kanapki are actually a full meal, and are prepared at pretty much any time of the day.

“I can assume that every Pole eats at least one kanapki a day,” says Karolina Klesta, the homecook and native of Poland who runs the blog Polish Foodies. “It’s the typical food you have for breakfast and supper in Poland.”

A typical breakfast spread in Poland might feature kanapki as the centerpiece. According to Serious Eats, breakfast often includes a selection of hard boiled eggs, sliced ham and sausage, tomatoes, cucumber, and cheese. It all comes with sliced bread that you can use to assemble your own kanapki.

A kanapka might then be eaten again at lunch — or second breakfast as it’s commonly known in Poland. Common toppings include smoked salmon, pickles, radish, sardines, olives, cheese, sliced sausage, or pickled herring on rye, wheat, or pumpernickel bread. The base is usually an herb butter or, according to Klesta, a cottage cheese-like spread called gzik. Her preferred preparations include sour cream, chopped chives, radish, and boiled eggs that you “mince with a fork,” as well as sour cream, smoked mackerel, and onion. 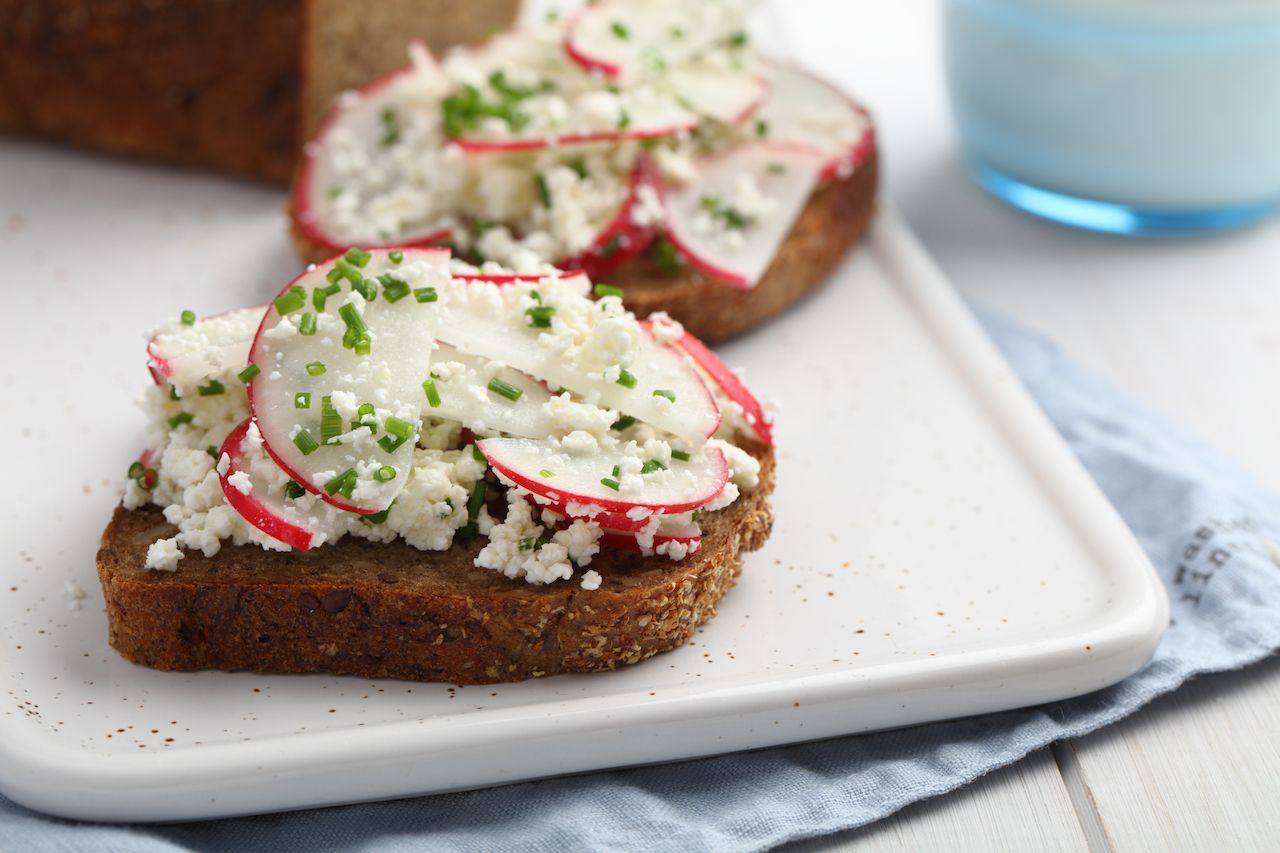 “Poles love kanapki and will eat them everyday. Morning kanapki will most likely be topped with a variety of cheeses — like our favorite twaróg — farmer’s cheese or sliced eggs,” says Anna Hurning, author of Polish Your Kitchen: A Book of Memories. “Second breakfast and supper sandwiches can be prepared with smoked meats, meat or fish pâtés and greens. Poles love dark rye breads with seeds or crunchy whole wheat breads slathered with butter.” Her preferred garnishes are seasonal vegetables, like “sweet and ripe tomatoes, crunchy cucumbers, spicy red radishes, [and] pickles or sweet red peppers.”

Hurning argues that part of kanapki’s popularity in Poland is due to their versatility. A kanapka is simple to throw together, portable, and customizable. She compares their position in the pantheon of Polish cuisine to the beloved hamburger in the US.

Kanapki have a long history in Poland. Originally, kanapki were known as tartinka (from the French word for an open-faced sandwich, tartine) and they were almost exclusively served as hors d’oeuvres at cocktail parties among the wealthy in the early 1900s, as described in a story in the Polish culture side Culture.pl. At that time they were smaller, too. Some restaurants served them as well, notably a restaurant owner named Antoni Hawełka, who sold “fresh bread rolls lathered with cream butter” topped with ingredients like lobster and ham.

It wasn’t until the end of World War II that tartinka became kanapka: The size got bigger, Polish people of all economic backgrounds and classes started eating them, and they were served at all mealtimes, rather than just at fancy parties. As the kanapka became more democratized, the toppings changed too. This is when eggs, tomato, and mayo, for instance, became more common on kanapki.

“In the past, where people in Poland were poor, [my grandparents] used to eat kanapka with butter and sugar,” Klesta says. “My grandma told me that it was their typical breakfast when they were young.” She adds that not even stale bread will stop a really dedicated person from enjoying kanapki. All you need to do is just “pour some water on the slice, then spread it with butter.” 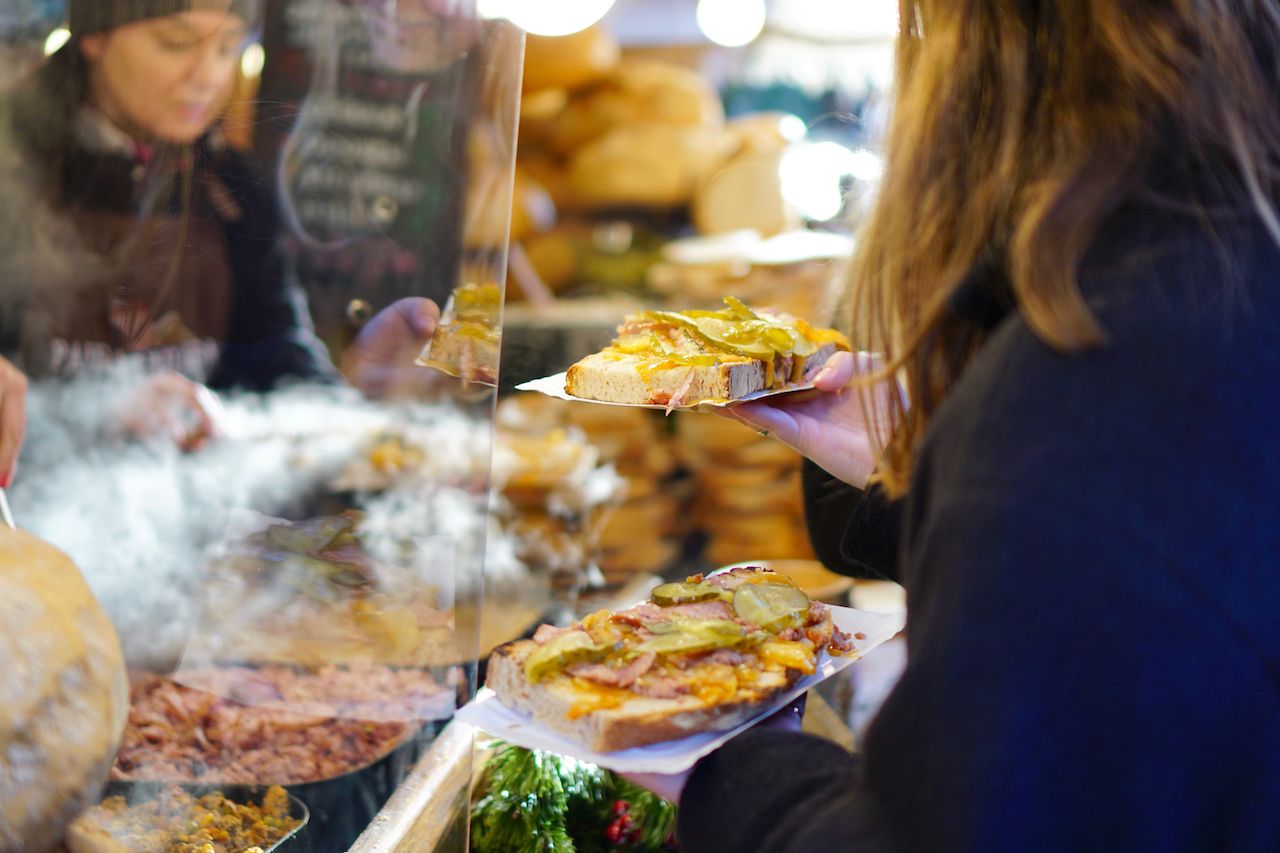 In modern Poland, kanapki remains a beloved national culinary institution. Hurning tells me that she ate kanapki everyday growing up. Her favorite topping “is a fish and rice mixture, called paprykarz.”

“This traditional spread comes from the North-Western part of Poland, [from the] city of Szczecin, where I’m from,” Hurning says. “It is because [of] our close proximity to the Baltic Sea and availability of fish, this dish was born and is now famous all around the country. Aromatic fish is prepared with tomatoes, carrots, onions and spices, cooled and served on top of our favorite bread. I prepare it every time I feel home sick because it reminds me of home, it is a true comfort food for me.”

Klesta argues your best bet for eating a really tasty kanapka in Poland is to make your own with local ingredients which you can pick up at the supermarket or, if you have the ability, to try one in the home of a Polish friend. Kanapki are “too easy to make and too cheap to buy it in the restaurant,” she adds. But Hurning has a different perspective: If you want to experience a kanapka the “true Polish way,” you have to eat one at a restaurant in Poland.

“[Restaurants] will serve hearty, thick slices of bread with a traditional aromatic bacon spread called ‘smalec’ accompanied by slices of sour pickles,” she says. “This delicious sandwich reflects simplicity and resourcefulness of Polish cooking where ingredients are stretched to their fullest and nothing goes to waste.”

Whether you visit Poland and pick up a ready-to-eat kanapka at a bakery or restaurant or have the opportunity to sample a kanapki spread featuring local ingredients at the home of Polish friend, this open-faced sandwich is a must-try when you have a chance to visit Poland. Becoming familiar with kanapka is the first step in understanding Polish cuisine, and their traditions around the dining table. But getting your hands on a true Polish kanapka might also expand your conception of all the amazing things a sandwich can accomplish with the right toppings on hand.

Food + DrinkThe Real Story Behind Why Some Wisconsinites Eat Raw Meat Sandwiches Around the Holidays
Tagged
Food + Drink Poland
What did you think of this story?
Meh
Good
Awesome