Orcas Island, Washington can easily be crowned one of the most beautiful places in the world. Situated amongst the San Juan Islands, Orcas Island is a remote, truly wild wilderness. Dotted with hikeable mountains and scenic state parks that offer camping, fishing, and swimming, Orcas Island is a paradise for people whose idea of a good time is spending all day outdoors – playing on the pebbly beaches or exploring hiking trails enveloped in emerald green forests.

Orcas Island restaurants source most of their ingredients from around the San Juans, so expect fresh salmon and briny oysters served on well-worn picnic tables. The hiking trails lead to majestic bluffs dotted with trees, and the water will call you onto it for all sorts of activities – from fishing to whale watching to sailing at sunset. If you yearn to be on the water in a boat, you will fit right in on Orcas Island. And if you arrive in summer all the way into fall, you will likely catch a glimpse of the San Juan Islands orca pod residents gliding by the shoreline – an unforgettable and awe-inspiring experience you’ll never forget.

The Orcas Island hotels – well, they are more like rustic cottages and cabins in the woods, and primitive campsites where you will likely need to refresh your survival skills, because there aren’t a lot of amenities available on these patches of Earth. But that’s what life on Orcas Island is all about: reveling in the mostly untouched beauty of the natural world, and getting as close to it as you can.

If it’s your first time exploring Orcas Island, you’re bringing along kids, or just need a getaway from Seattle, a day trip to the island isn’t exactly easy – but it’s totally possible (especially if you have a car). Here’s exactly how to do it, and what to do once you get there.

How to get to Orcas Island 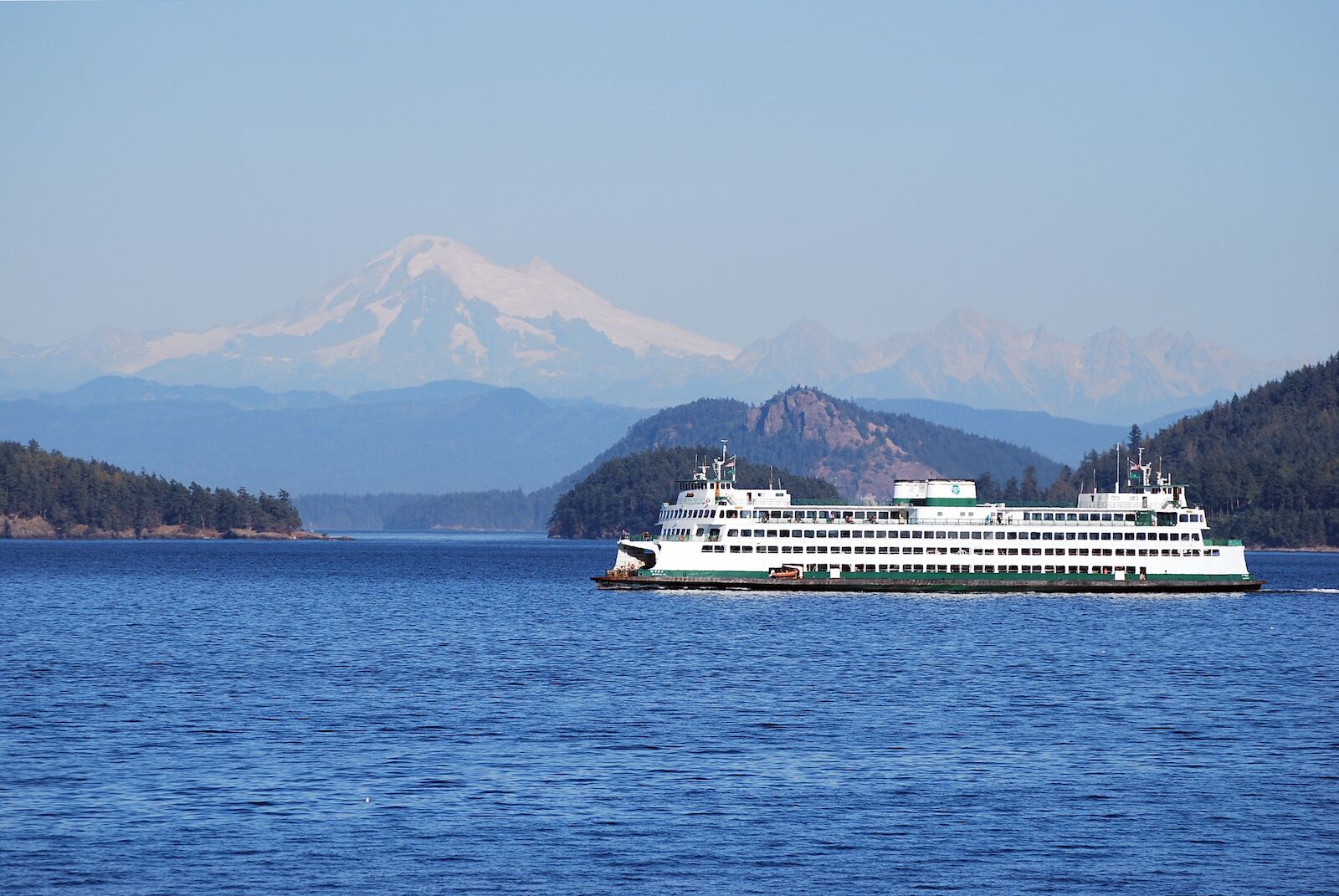 How to get around Orcas Island 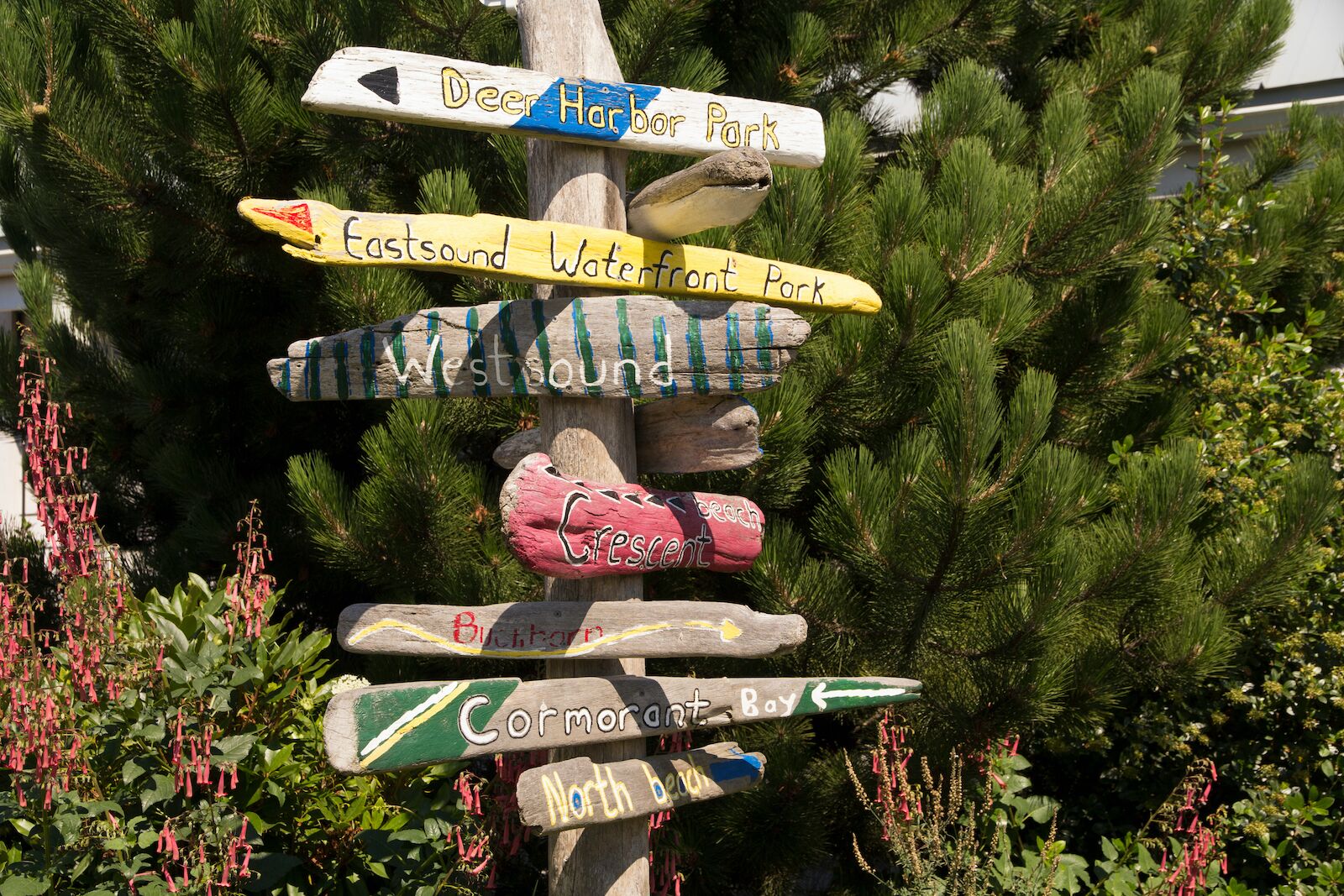 To cover the most ground during a day trip to Orcas Island, Washington, you need a car. However there are a few other ways to get around the island. During the summer months, San Juan Transit offers a shuttle bus service that serves the island on the weekends, which stops at Deer Harbor, Eastsound, Moran State Park, and Rosario Resort. You can also rent a bike at Wildlife Cycles, but the best option is an electric bike because of the island’s hilly terrain.

What to do on an Orcas Island day trip 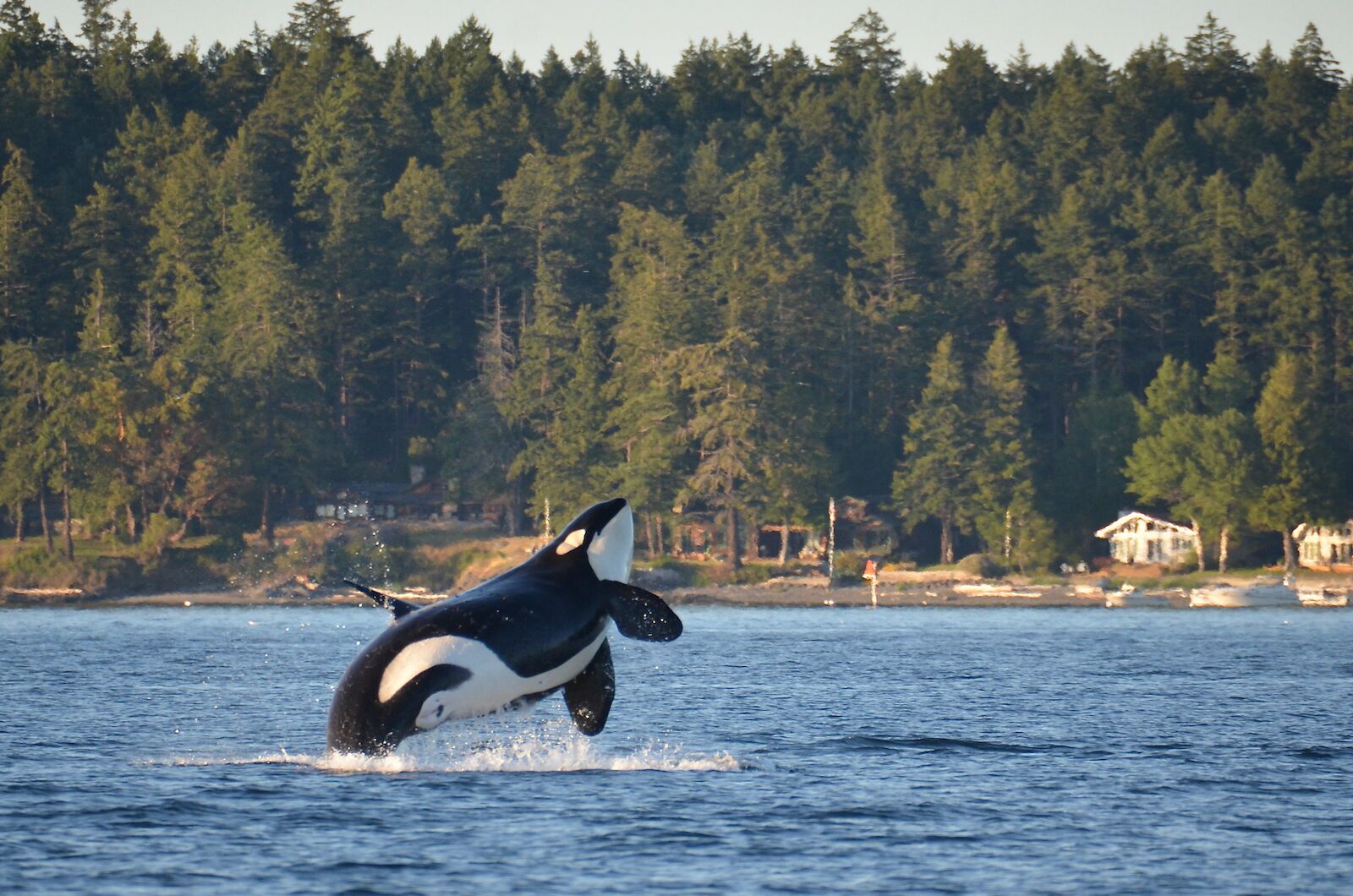 If you have a car, follow the Scenic Byway, which takes around three hours to complete. The island is shaped like a horseshoe so no matter where you are you’re going to get a stunning view of the ocean.

Since most people take the ferry from Anacortes, the first stop on your trip will likely be Orcas Village. Known as the Landing by Orcas Island locas, here’s where you can rent a car if you don’t already have one, book a boat tour or a whale watching trip, or a guided kayaking tour. But this Hamlet is tiny, and aside from picking up a couple snacks for your road trip you probably won’t spend much time here.

Another small village on Orcas Island, first settled by the Coast Salish peoples, West Sound is closest to Orcas Village on the byway route.

From West Sound families can paddle or motorboat out to Victim or Skull Island, which are totally uninhabited and ripe for exploration. Orcas Island Historic Yacht Tours also disembark from Westsound, offering daytime sightseeing tours and sunset wine tours for adults. Kingfish at West Sound is a chic and modern inn that features four suites and a restaurant where every ingredient is sourced from San Juan Island purveyors – but if you’re looking to have dinner there, be sure to make a reservation beforehand.

A twenty minute drive from Ferry Landing, Deer Harbor is known in particular for its fishing culture,  and visitors and locals alike stop into Deer Harbor for Dungeness crab, rock crab, and shrimp.

Life in Deer Harbor centers around the marina, where you can schedule a whale watching trip or kayak trip, or book a sailing excursion. Some people think Deer Harbor is home to the best beaches in Orcas Island, because the shores are sandy rather than rocky. Head to the Dock Store to pick up snacks for a beach picnic or drop in for dinner at the Deer Harbor Inn, a series of cozy and rustic cottages just six miles from the Turtleback Mountain trailhead. 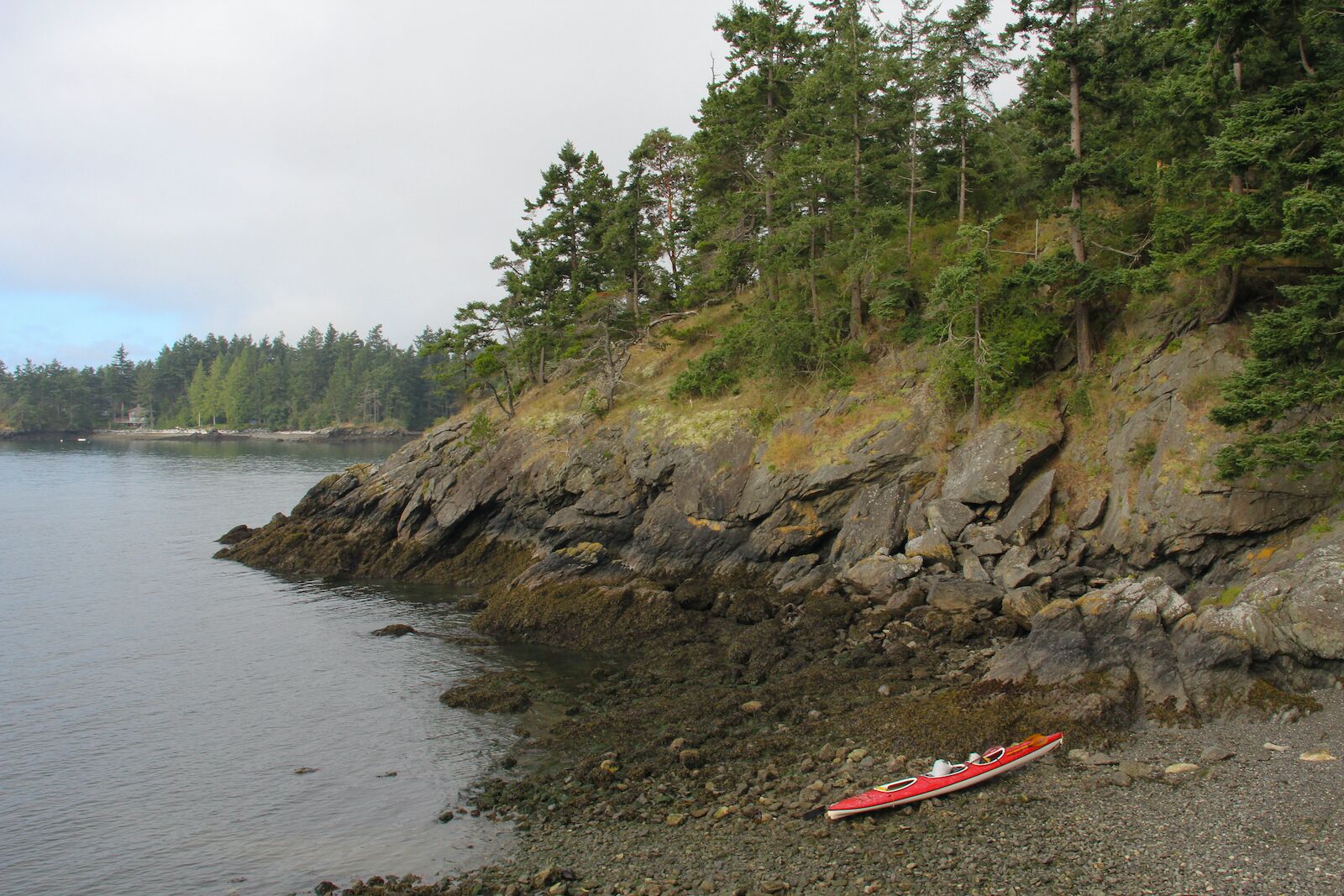 The Doe Bay outdoor soaking tubs, which overlook the bay, should be on your travel bucket list. Available to be privately booked for groups up to eight people, the spa is just one aspect of Doe Bay Resort you’ll want to experience. Not only does the property offer cabins and camping if you want to extend your stay, Shearwater Adventures offer guided 3 hour guided kayak tours twice a day Memorial Weekend thru Labor Day. One of the best restaurants on the island is undeniably Doe Bay Cafe, where all the dishes are sourced from local farmers and fishermen.

Moran State Park is connected to Doe Bay Resort & Retreat, where you can camp, swim in one of many freshwater lakes, hike Mount Constitution, fish for trout, paddle board, or go bird watching.

Considered Orcas Island’s downtown, Eastsound Village is a quaint walkable area where you can take a break from driving. Explore the island’s history at Orcas Island History Museum, or browse through a selection of organic produce, flowers, pottery, and pastries at the Orcas Island Farmers Market.

Venturing away from the main town center, you’ll also find Orcas Island Winery where visitors can sip wine in the farmhouse tasting room, as well as Once In a Blue Moon Farm, which offers by appointment only tours of the pastures and orchards, plus lots of opportunities to interact with the farm’s animal inhabitants.

If you’re looking for somewhere to eat, start your journey at Brown Bear Baking for an array for baked goods and the (purportedly) best coffee on the island. For a more casual lunch, Hogstone Pizza is a popular choice, but for an upscale dinner where you can take in the stunning ocean views and locally caught seafood, opt for an evening at The Inn at Ship Bay. 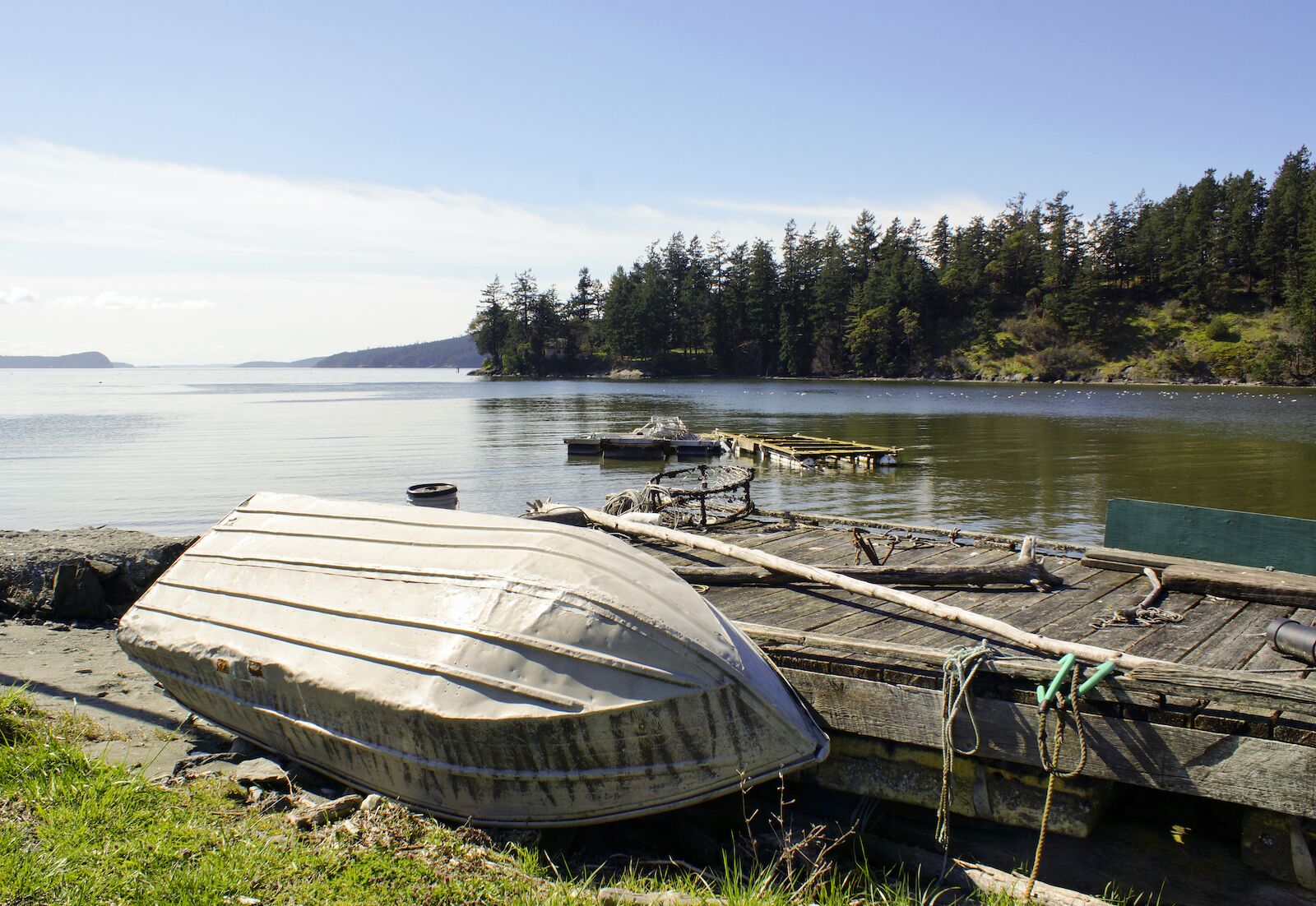 This hamlet is just 20 minutes away from Eastsound, on the shore of Buck Bay, where fresh and saltwater mingle, attracting salmon, osprey, and an abundance of shellfish. The reason to visit this picturesque community is Buck Bay Shellfish Farm, where visitors can sit at outdoor picnic tables overlooking the bay, and munch on seafood that is as fresh as you can get anywhere in the world: oysters, grilled salmon, shrimp, crab, and more.

Just one mile from Olga is Obstruction Pass State Park, where visitors can traverse a short path to the beach. Far more peaceful than the usually crowded Moran State Park, Obstruction Pass offers quiet beaches for crabbing, kayaking, and rustic camping without many amenities.

Built in the historic Moran Mansion, first erected in 1909 by one of Seattle’s former mayors, Rosario Resort sits on the edge of a cliff overlooking Cascade Bay. The 30 acres of idyllic property is a secluded oasis. On top of two pools, a hot tub, and a  full spa, the resort also offers wildlife tours, wine cruises, sunset sailing, and kayak tours at Rosario Marina. The Moran Mansion Museum is open to the public, and spotlights the region’s nautical history.

Food + DrinkAll the Essential Stops on a Seafood Tour of Washington State
Tagged
Outdoor Travel Washington, United States
What did you think of this story?
Meh
Good
Awesome