Modern travel is full of conveniences. Global air hubs connect travelers to faraway places in a matter of hours. But with all these modern comforts, it’s easy to pass right by the things that make the actual travel part of the journey worthwhile. Vacation by Rail’s Winter Magic trip, operated onboard ViaRail’s overnight train from Vancouver to Jasper, seemed the ultimate way to take in Canada’s winter wilderness the slow, nostalgic way. Views of towering mountain peaks and river-carved valleys combined with a memorable onboard experience sure beats cramming into an airplane seat in economy. Here’s what to expect on the Vancouver to Jasper train journey. 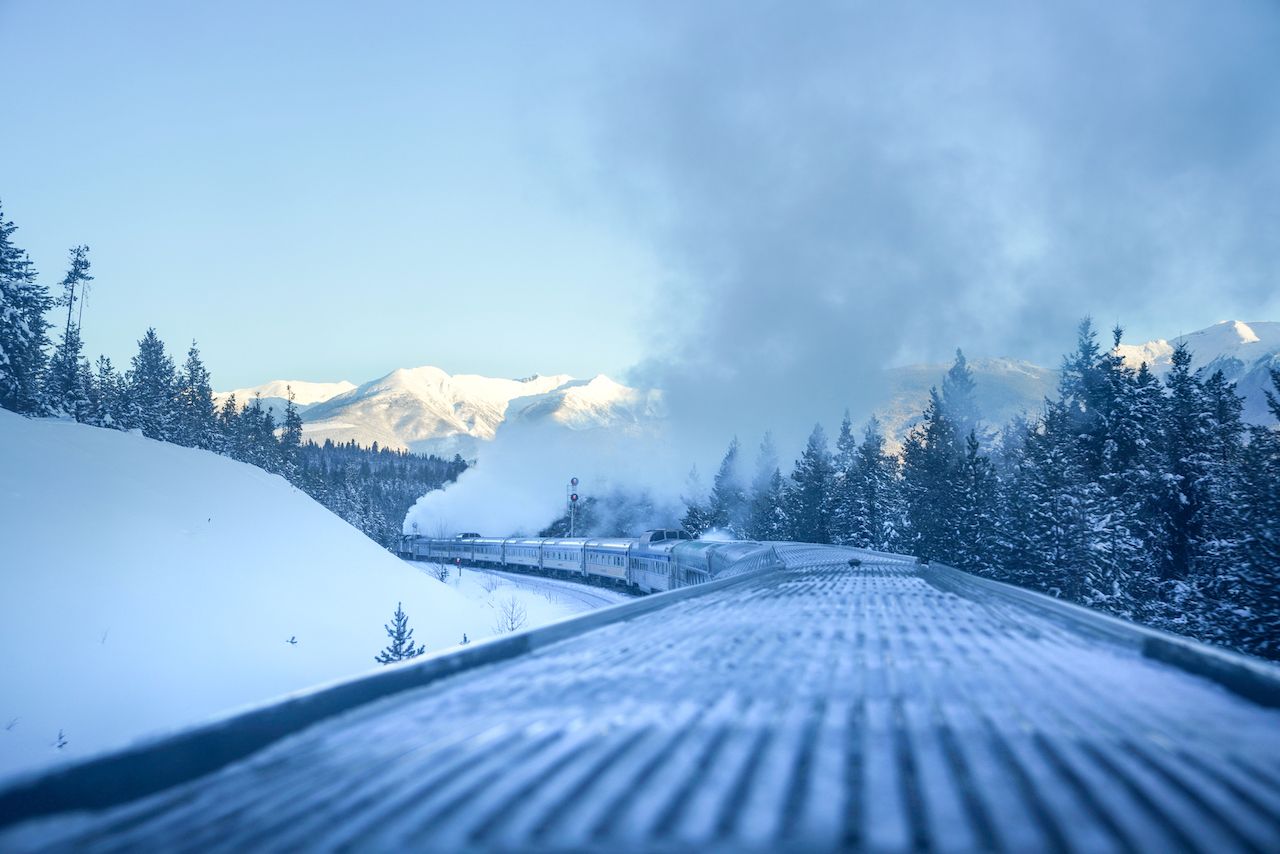 My breath puffed as I made my way to Track 5 at Vancouver’s Pacific Central Station and located the appropriate sleeper car. I was set to embark on the Winter Magic trip from Vancouver to Jasper, and once aboard, I was welcomed by Erik, our train car attendant for the journey. We departed Vancouver at 3:00 PM on the dot, and by 3:05 I was sipping a glass of welcome Champagne and the city started to blur into the background.

The train car itself was reminiscent of the 1950s and rich with old-timey vibes. That had been the golden era of rail travel in Canada, and venturing from car to car was like a step back in time. It had a slight cruise ship feel to it, accented by the movement of the train, narrow hallways, and small sleeping spaces. But, the comparison stops there — the rest of the experience had more of a summer camp vibe with opportunities to mingle with other travelers, play games, and enjoy the rare luxury of free time.

This particular route spans from Vancouver to Toronto (and vice versa) and is the second-longest train trip in the world, with the only stop between Vancouver and Jasper in Kamloops at around midnight. The entire route takes approximately four days; however, the Vancouver to Jasper portion of the trip was set to be about 19 hours — without any delays, that is.

Book a sleeper car for the best experience 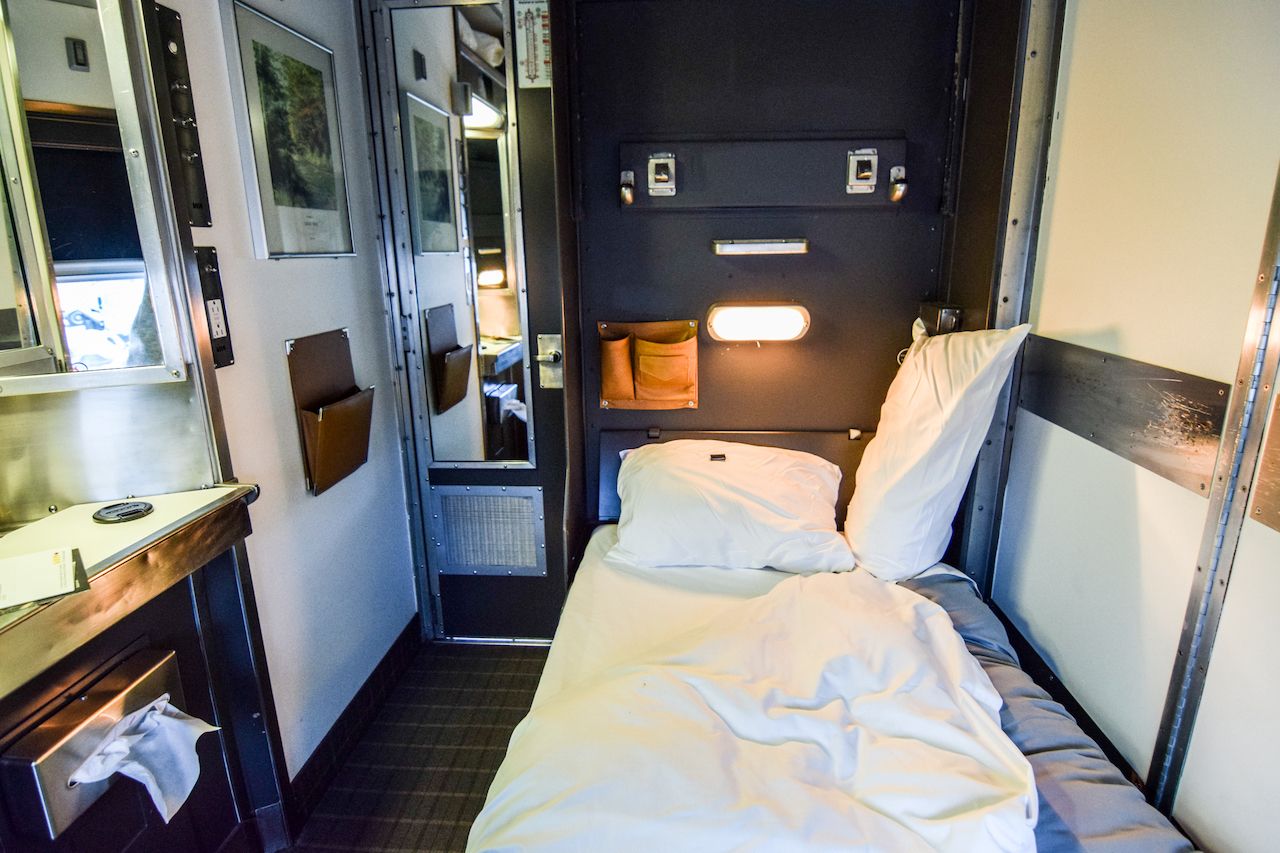 “Is there a key for the rooms?” I asked Erik.

“No, you’re in Canada; you’re safe,” he joked, laughing through his impressive twisty mustache.

The tiny but effective cabins do, in fact, lock from the inside. Each car houses 13 sleeper cabins that make use of their dollhouse size with many features doubling up to serve various purposes including bunk beds, small storage areas, and a window looking out on the passing countryside. You’re not going to be in your room much anyway as the purpose is to be social, meet fellow train travelers, and enjoy the landscape and onboard entertainment.

By day, the room is set up with chairs for gazing out your window if you so choose to gawk in privacy. The train attendant will then turn down your room when requested, transforming the cabin into your slumber space. I’m happy to report that it wasn’t the most uncomfortable bed I’ve slept in, and I was actually lulled to sleep by the movement and sound of the train chugging along.

Economy class ($156 CAD, about $116 from Vancouver to Jasper) is the cheapest and most basic way to ride, similar — though slower and with much more legroom — to booking a window or aisle seat on a plane. An upper berth in a sleeper cabin runs for about $458 while a lower berth is $538. Keep in mind that this does include food onboard. For a real splurge, consider the Prestige class cabins (which have a larger ensuite bathroom, television, and bigger window, which does make a difference, and a full-size bed instead of the bunk beds in the sleeper cabins.) Wheelchair-accessible rooms are available. You can book an entire nine-day itinerary through Vacations by Rail to include the train travel, lodging in Jasper, airport transfer, and all tours and experiences, from $1924.

The meals and entertainment put long-haul flights to shame 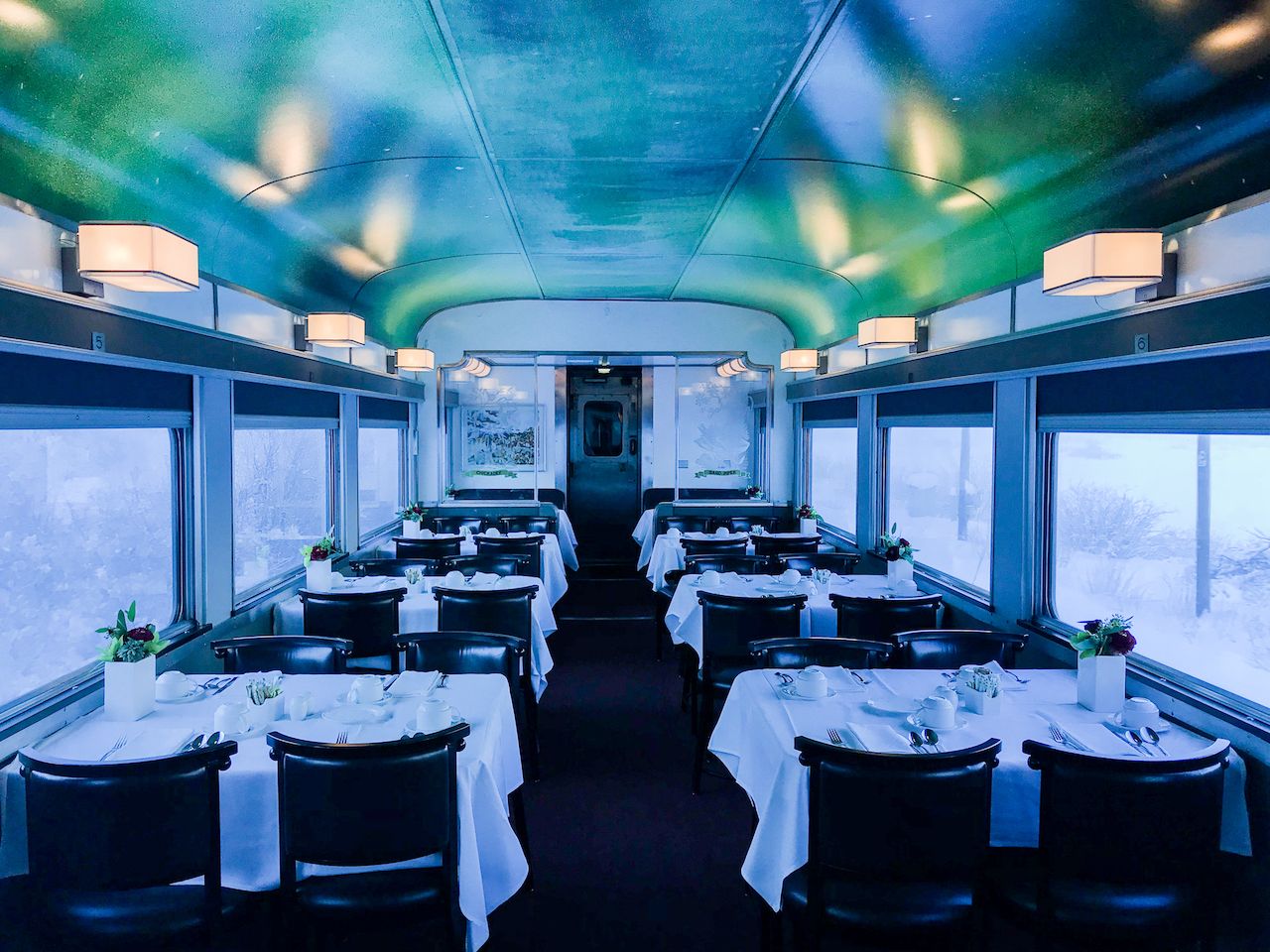 Move over airplane food. The meals in the sleeper train were actually quite exquisite, complete with cloth napkins for an air of fanciness. Sleeper-class travelers have all of their meals included and can choose between two reservation times. Prestige-class customers get first preference for sittings, as well as a pre-dining appetizer service. Entrees vary by season and trip, with options including Canadian Lake Trout, pan-seared duck, and stuffed portobello caps among those commonly available. In economy, sandwiches, pasta, and breakfasts are available take-out style.

“One thing people don’t do in Prestige is starve,” the head bartender Marty said while mixing up the most popular drink on board, the Maple Leaf. An elixir of Crown Royal, lemon juice, and maple syrup, it doesn’t get much more Canadian. 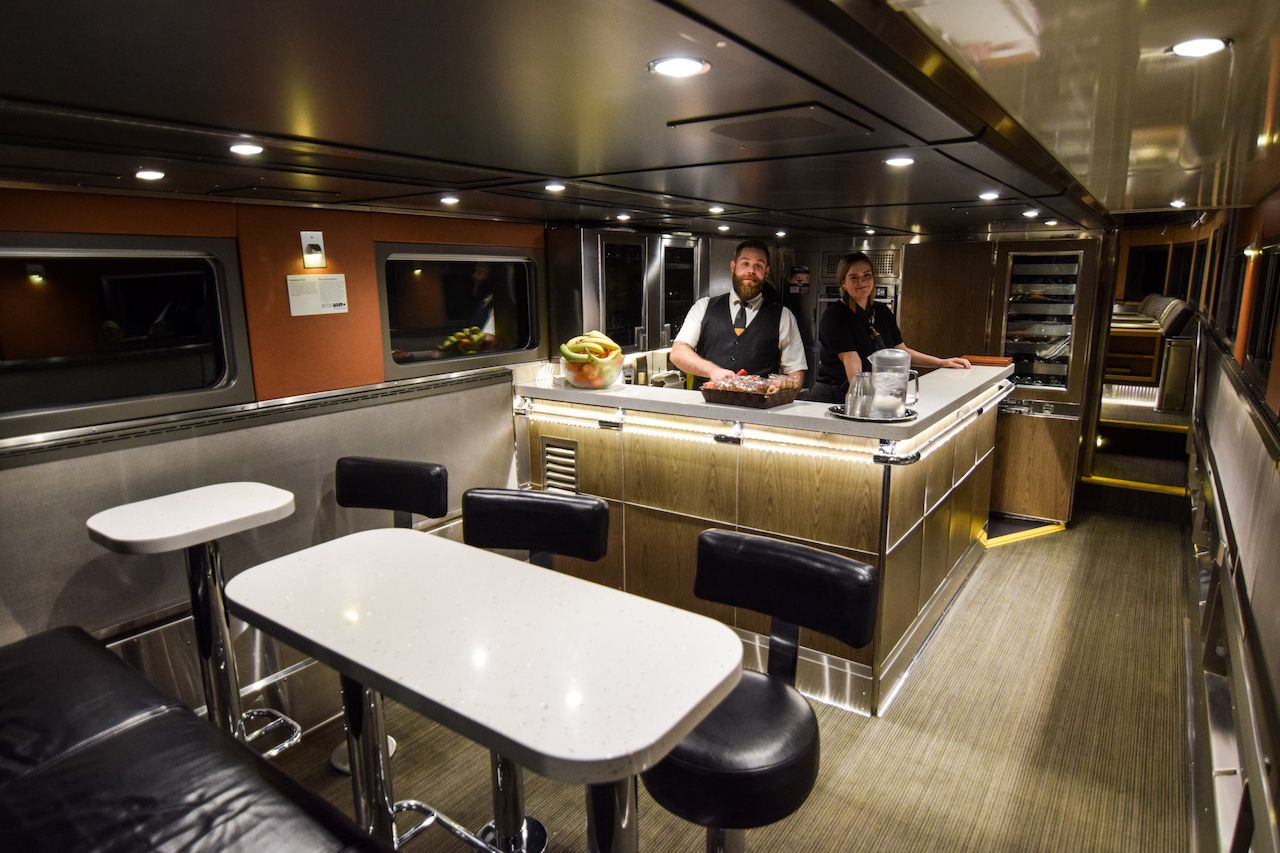 Other than the onboard drink service, it is possible to bring alcohol, given it’s kept and enjoyed in your room. Need a caffeine fix? Coffee and tea are readily available.

Although there is no WiFi and very limited cell service, there is plenty to do onboard. Play cards or one of the various games in the communal “hang out” car, listen to live music (yes, musicians are often hired to play), or learn to knit. A magician has been known to appear to do some tricks on board. This ride is also a prime chance to finish that book that’s been sitting on your bed stand for the past year. I passed the evening with Scattergories and listened to the singer in the lounge car; the seven episodes I had downloaded from Netflix remained unwatched. It was a truly unplugged travel experience.

You’ll spend plenty of time staring out the window 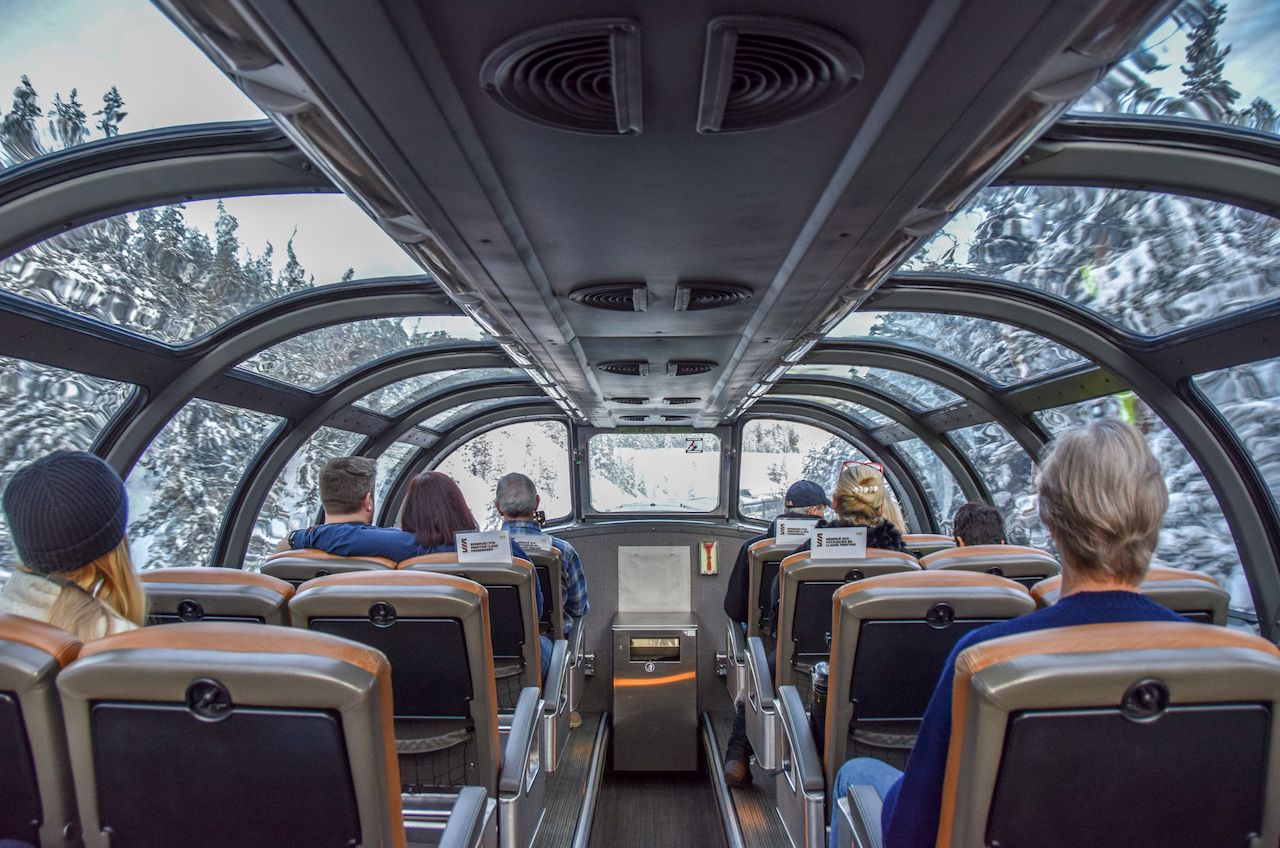 The following morning, I made my way to the common area to watch the sunrise, coffee in hand. Stars dotted the sky, our route lit only by the train’s headlights. Even in the predawn calm, blue hour started to peel back the layer of darkness. At this point I wasn’t alone — several other passengers had emerged, sleepy-eyed, to witness this truly unique sun-up experience. We had another six hours to stare at this backcountry backdrop, and I planned not to blink the entire time.

If I hadn’t known better I’d have thought I was on board the Polar Express. Think snow-laden pines guiding the tracks cradled by mountain giants, steam rising from untouched rivers, snaking along the route. Plan to spend ample time gazing out the window, camera at hand, as you pass through small mountain villages and, with any luck, see some wildlife.

Along the way, the conductor, attendants, servers, and bartenders are happy to share notable points of interest. Watch out for Pyramid Falls, a 300-foot beast that cascades into, you guessed it, a pyramid. In the winter, the fall is frozen, adding to the absurd beauty.

Planning and booking your trip 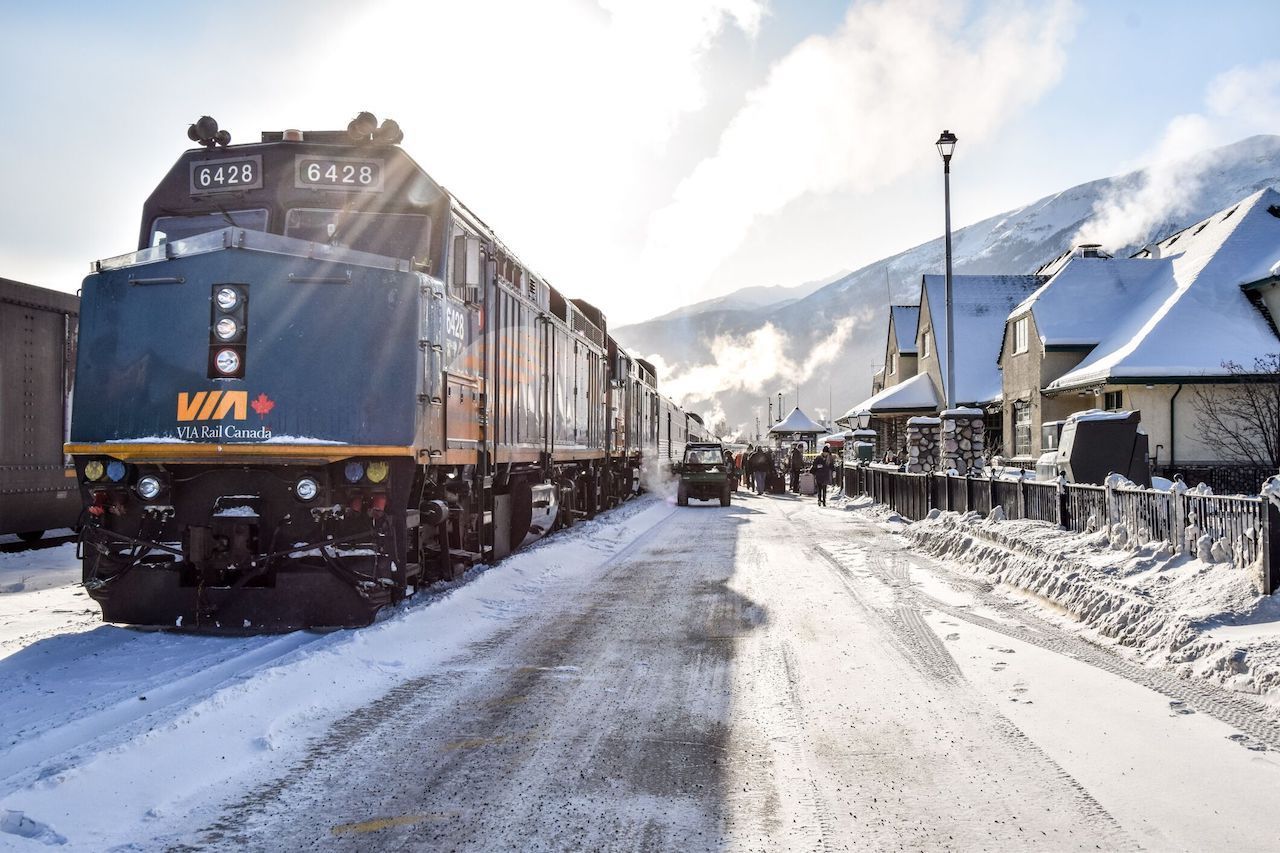 If you’re anxious to hop aboard and experience slow travel with an incredible train ride yourself, step one would be to chat with Vacations by Rail. They’ll take care of planning everything down to your lodging outside of the train. You can choose, a la carte, the activities and stops you’d like to include. The excursions booked are independent, so you don’t have to deal with being thrown into a large group activity. It’s the best of both worlds, someone else planning for you while still holding onto the “choose your own adventure” aspect. They also take care of rebookings in the event of a train delay affecting your plans. There is real luxury in letting go of control and just enjoying the experience.

That said, plan early. Space fills up, especially in the summer months. In the summer season, cars are added on to accommodate extra travelers, and they’re generally at or near capacity. Splurge on Sleeper or Prestige class — the amenities and extra comfort are well worth it. Consider going during the winter months for fewer crowds and otherworldly scenery. For the Vancouver to Jasper train segment, five days is recommended at minimum to allow time in Jasper. 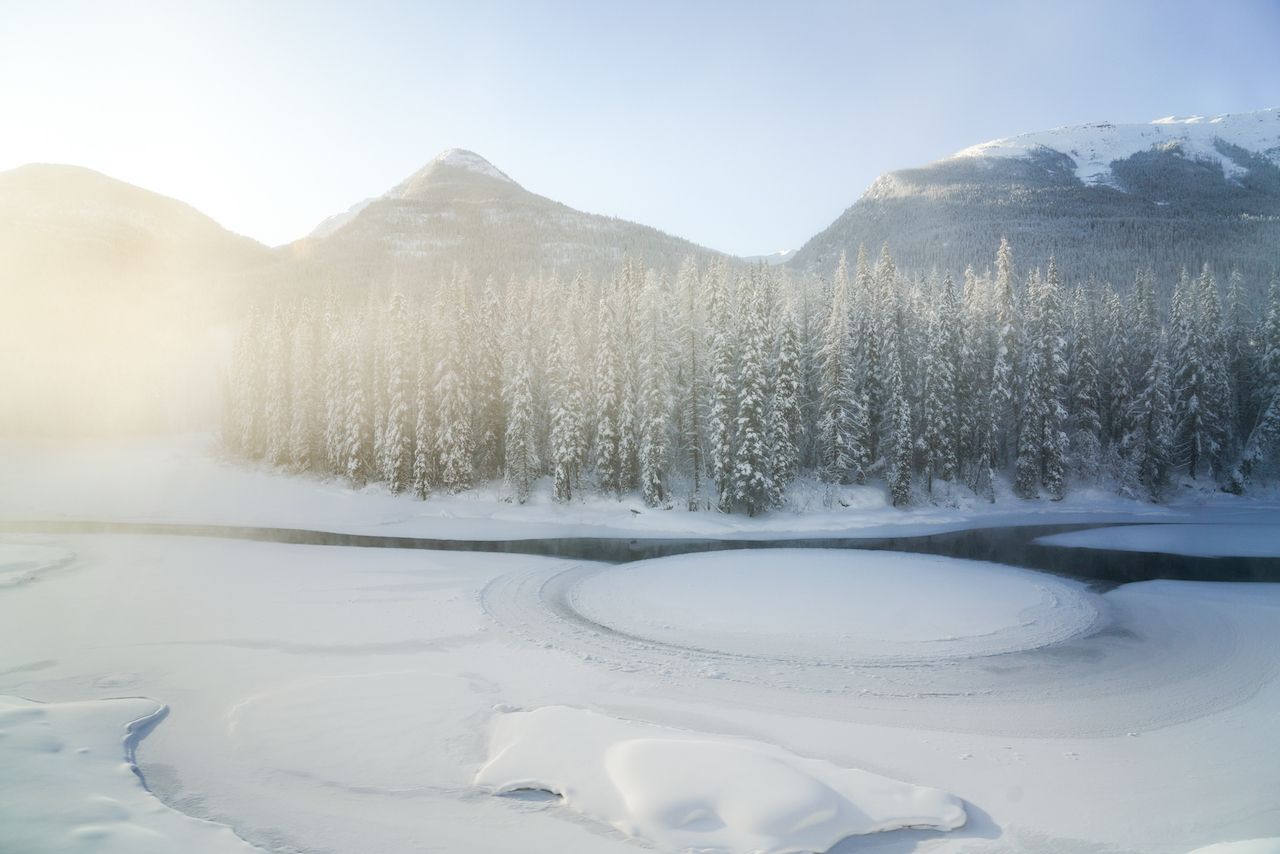 If you’d like to experience multiple nights on the train, you can opt to stopover in Jasper before continuing on to Toronto. If you choose to explore Jasper (and you should), Vacations by Rail will help you make the most of your time there. Venture into Maligne Canyon or spot wildlife with Sundog Tours; watch the sunrise at Pyramid Lake; and sample beers at the first brewery to open in a national park, Jasper Brewery.

Priority one is revel in the joy of the journey and the Canadian winter wilderness. Who knew train travel could be zen? We arrived in Jasper to record-breaking cold temperatures (-45 degrees). It was actually sad to leave the no-WiFi bubble, but the train deposits riders at the edge of some of Canada’s most pristine wilderness, and there were ice tours, hiking, snowshoeing, and more to explore. Jasper National Park and a fair amount of wild elk were waiting.