Moscow’s past is inextricably linked with the tsars and their favorite people, who, because of their status, did not live in communal flats but in incredibly fancy palaces. The palaces of St. Petersburg are world-famous, but Russia’s capital also has its fair share of magnificent noble residences, most of which are now museums. All the palaces impress with their beautiful architecture and equally beautiful interiors, as well as with their tumultuous histories. We have selected seven of them for you to add to your Moscow itinerary. 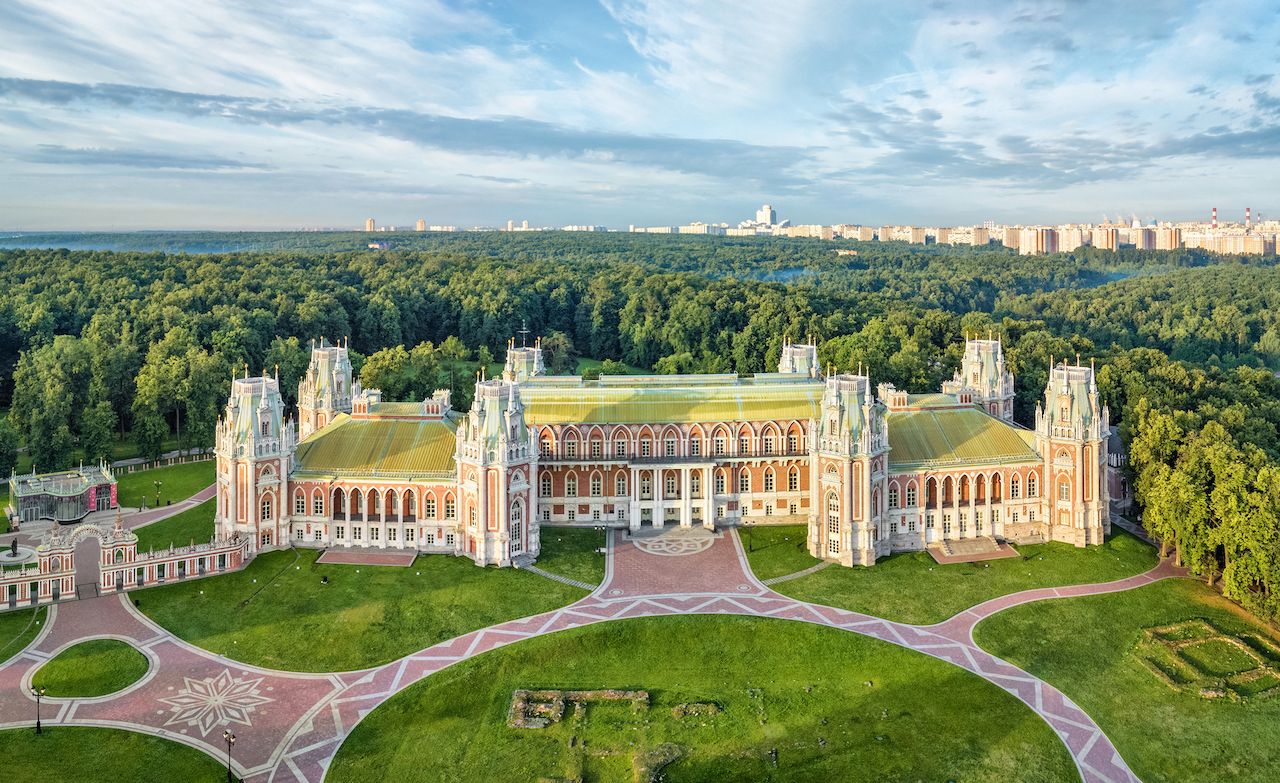 In 1776, Tsaritsyno was built on the order of Catherine the Great who fell in love with the pastoral beauty of the area; however, she never lived here. The empress did not like the creation of Vasily Bazhenov, so his work was torn down. A second attempt by architect Matvey Kazakov got cut short — Catherine the Great died before he could finish the 20-year enterprise. The building was abandoned until it was beautifully renovated between 2005 and 2007. 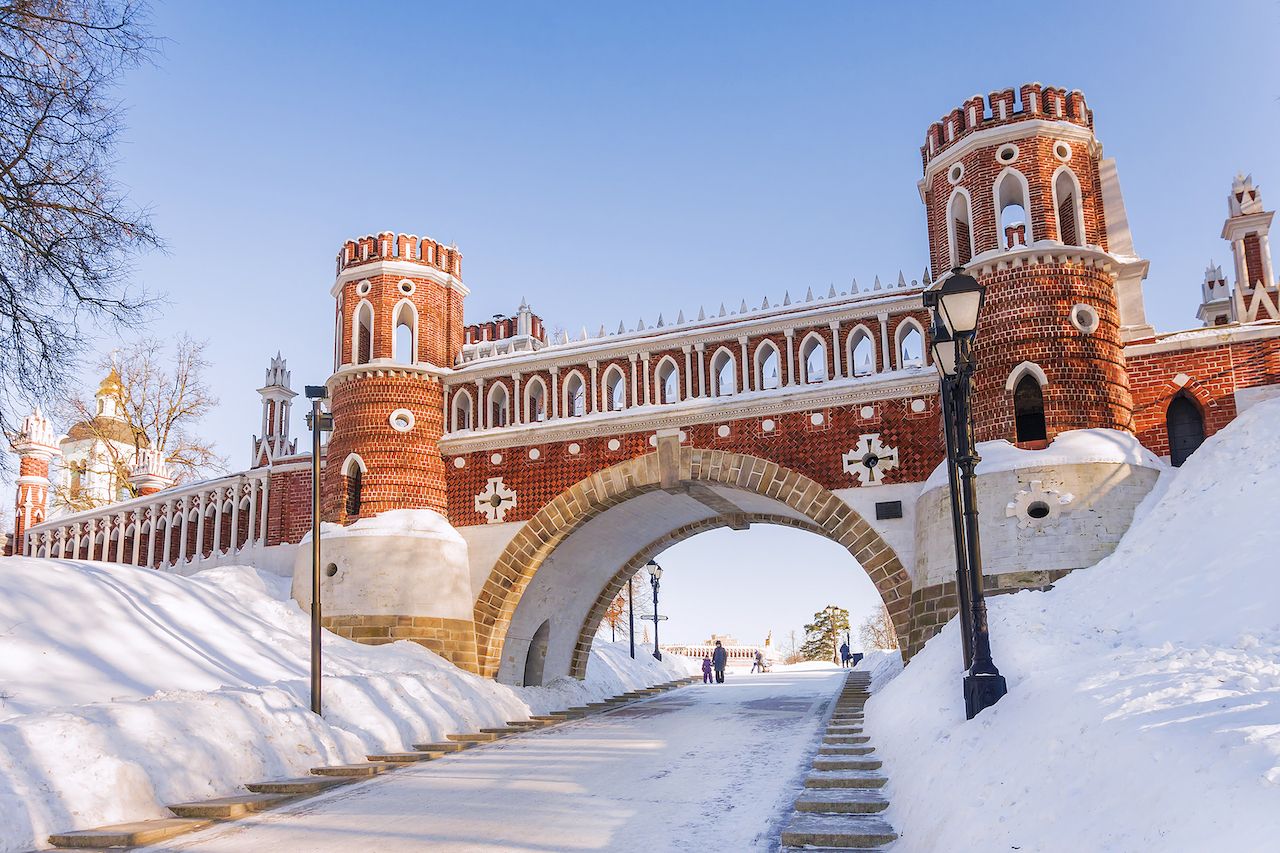 Today, Tsaritsyno is a museum within a large, 1,000-acre park. Tsaritsyno is located south of Moscow, a 40-minute metro ride from the city center to the Tsaritsyno metro station and a 10-minute walk to get to the gate. The palace is in the middle of the park, so you’ll have to walk for another 10 minutes to access it, but the greenery, and the fountains and bridges that dot it, are a sight to see and well worth the extra footwork. The palace complex is closed on Monday, but you can access the park daily, from 6:00 AM to midnight. 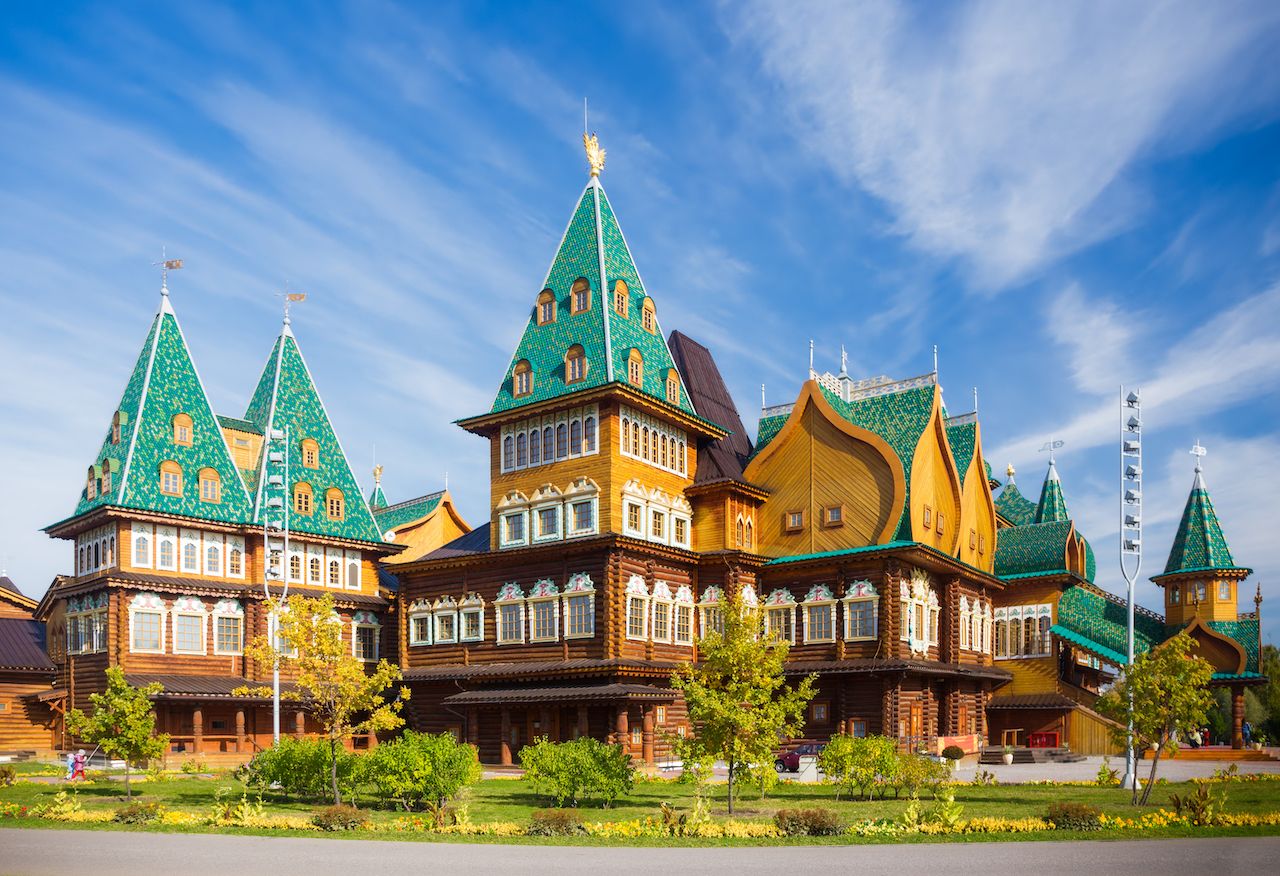 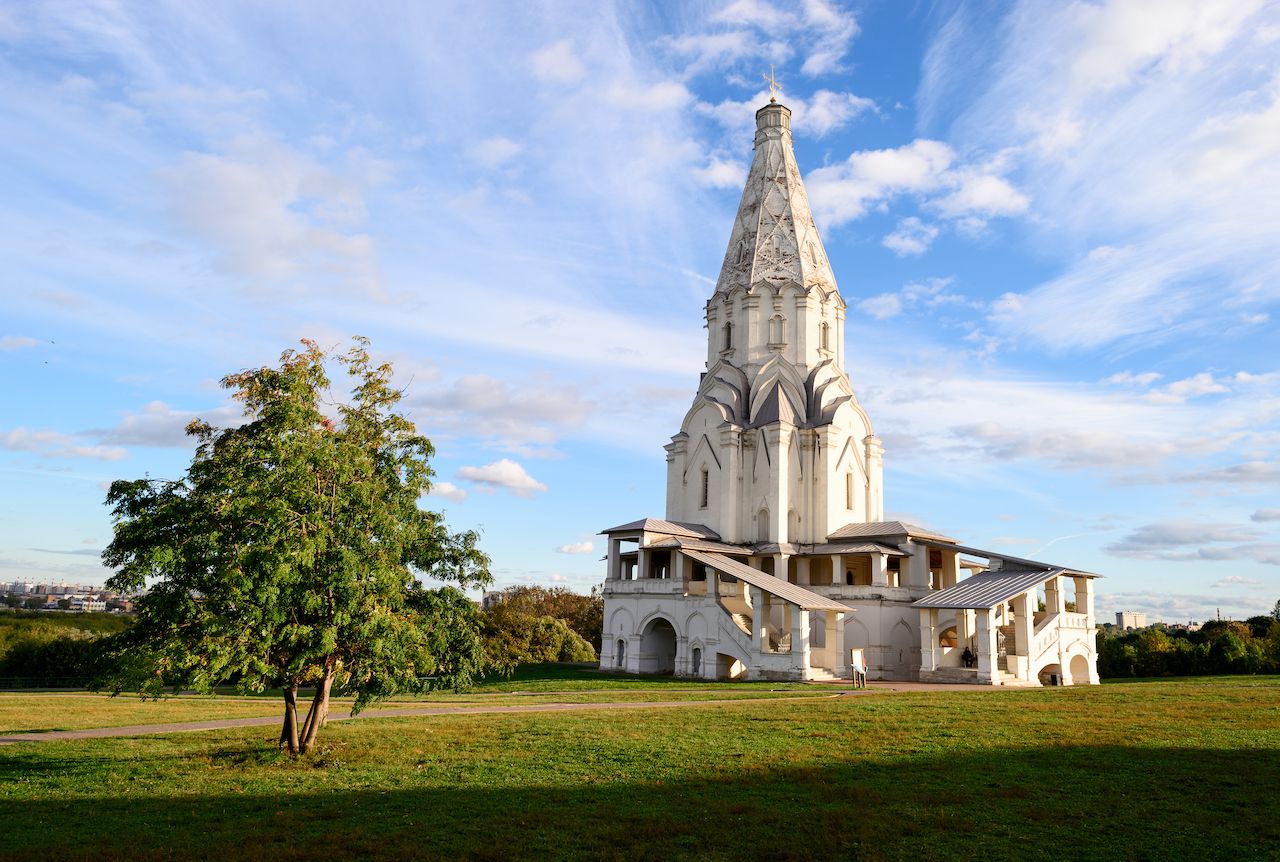 Today, the Kolomenskoye estate is comprised of 17 architectural monuments on 990 acres, including the 16th-century Ascension Church, which is a UNESCO World Heritage site; 17th-century wooden fortresses; and a 400-year old wooden Orthodox Church. The open-air museum is opened for visitors daily, except Mondays. To get there is a 50-minute metro ride from the center of Moscow to Kolomenskaya station. 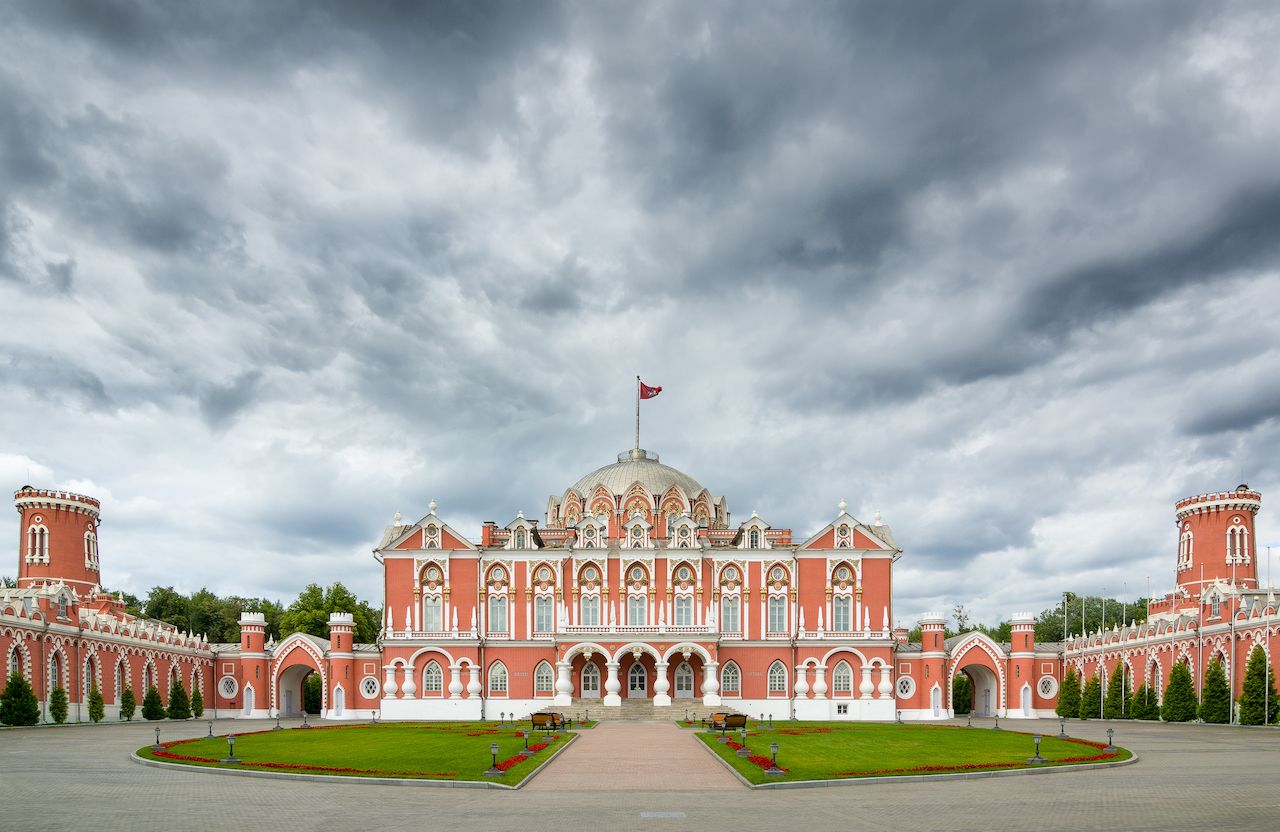 Built as a station on the tsars’ journeys from St. Petersburg to Moscow by order of Catherine the Great, the red and white Petrovsky Palace is the work of the famous Russian architect Matvey Kazakov (and, as such, bears a resemblance with Tsaritsyno).

Today, the palace is used as a four-star hotel, so visiting it is not an option unless as part of a rare guided tour. The edifice is also used as the House of Receptions of the Government of Moscow since 2009. To get to the Petrovsky Palace, located in the northwest of Moscow, travel on the metro to the Dinamo station and walk for fewer than 10 minutes. 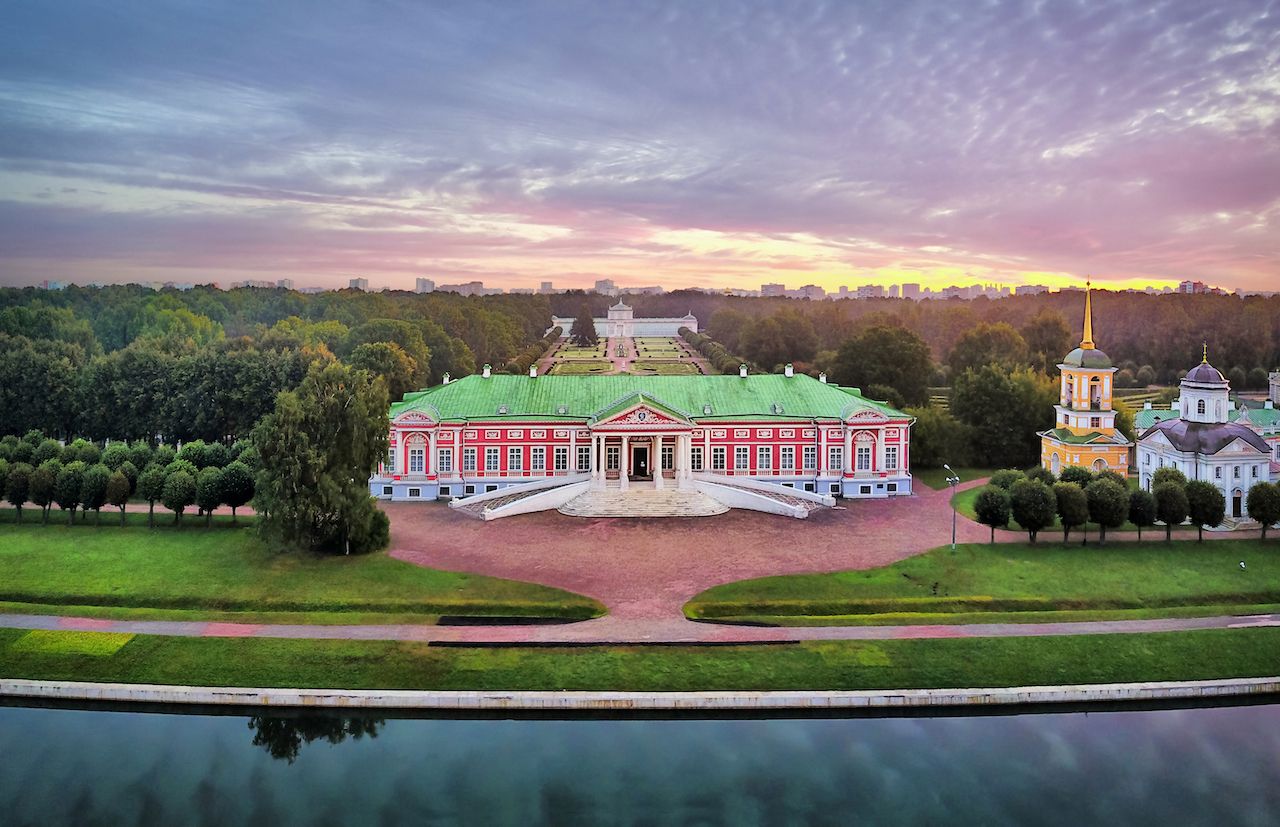 The huge Kuskovo complex was built between 1740 and 1780 by the wealthy and noble Sheremetev family to be used as a holiday residence. Besides the palace that was intended for receptions only, and which remains exactly the same as it was in the 18th century, the complex includes the Dutch House (a pavilion modeled on a 17th-century Dutch townhouse), Italian House (built in the style of 17th-century Italian villa), the Grotto, the Menagerie, the Hermitage and other structures in a large park with fountains, ponds, canals and a formal garden. 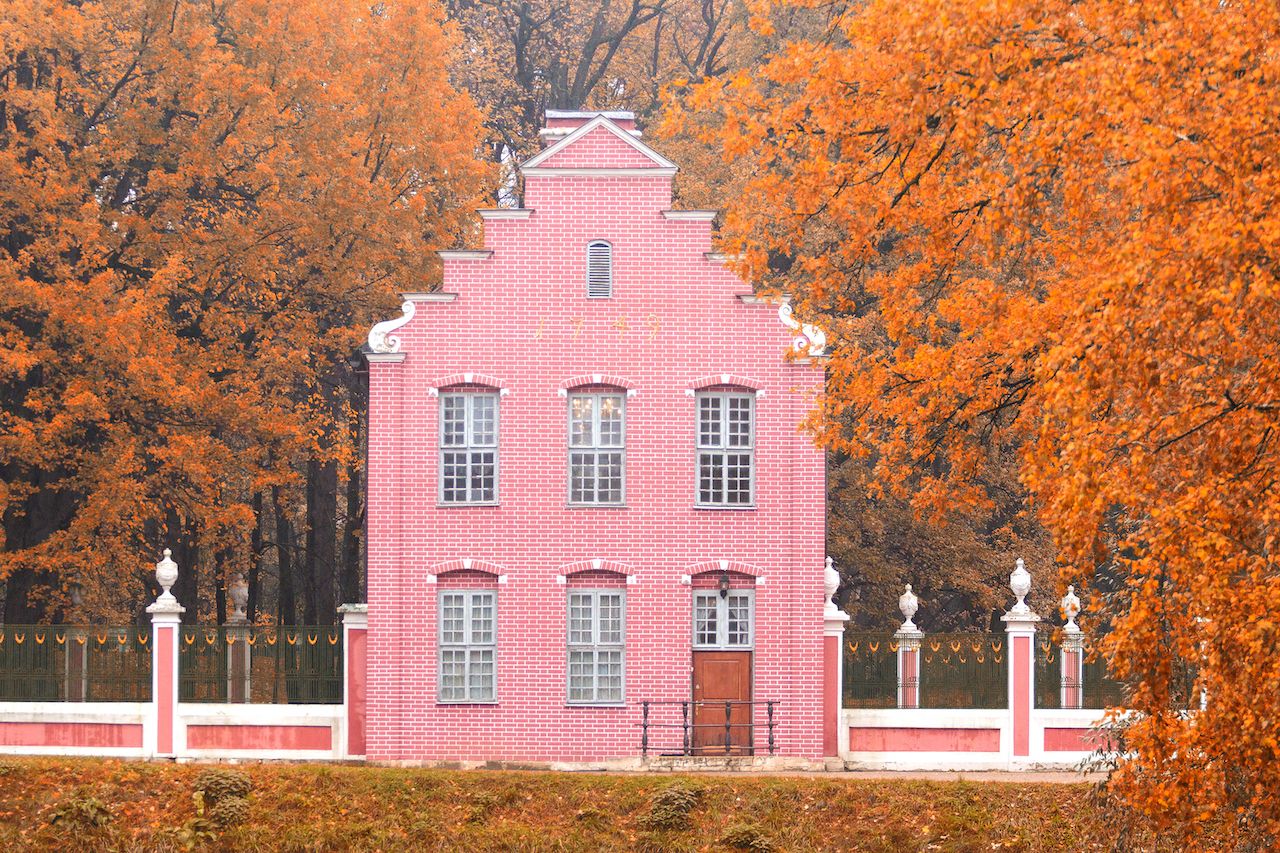 The superb ensemble is a museum of 18th-century manor life that contains 50,000 pieces such as paintings, drawings, sculptures, and artistic furniture. The complex is also the host for the State Museum of Ceramics, where works of porcelain, glass, and ceramics are displayed. Kuskovo is a 35-minute metro ride from the city center to the Novogireevo metro station and a 15-minute walk to the complex. 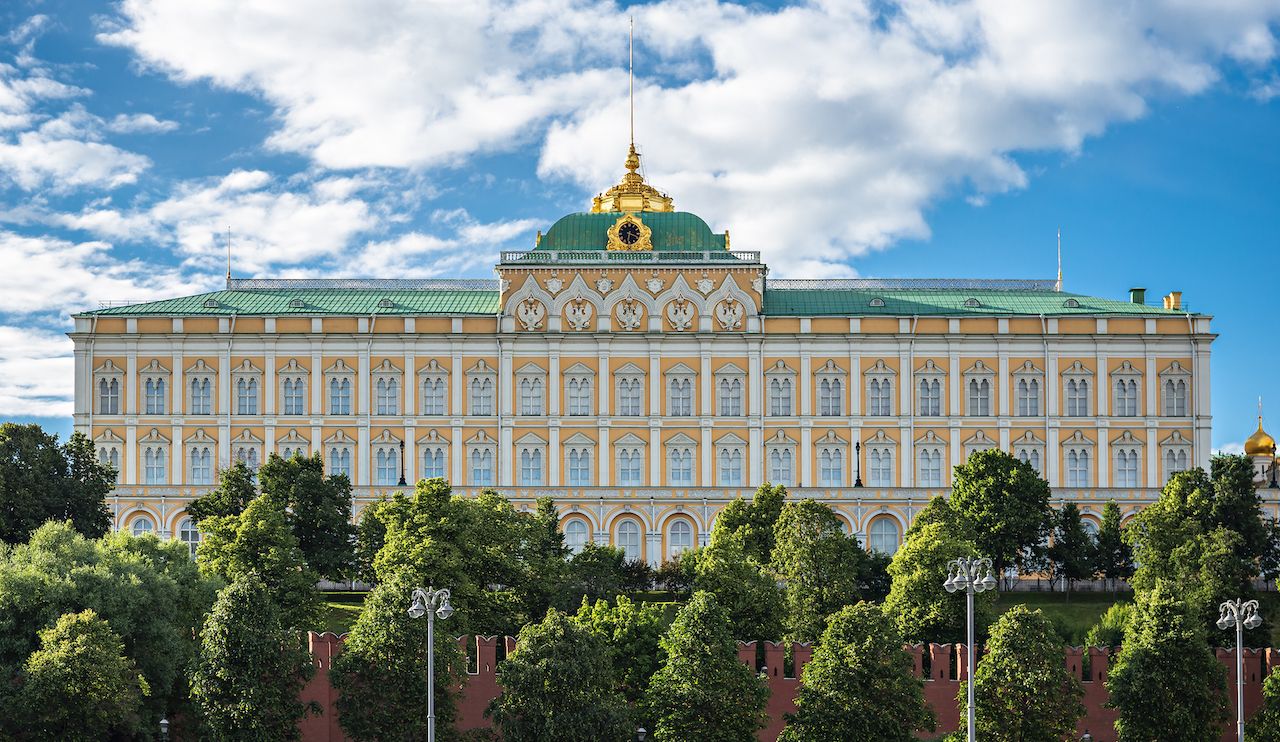 The Grand Kremlin Palace is the largest building in the Kremlin, a fortified complex of cathedrals and palaces located in the heart of the Russian capital. The Grand Kremlin Palace was built between 1837 and 1849 and used to be the tsar’s residence; nowadays, it is the residence of the President of the Russian Federation.
Although the outside may seem fancy, it is nothing compared to the lavish interior. With its intricate domed ceilings; huge, sparkling chandeliers; and gold -covered everything, it’s even fancier than Versailles. It is possible to visit the beautiful palace, but the only way to do it is by booking a two-hour tour. 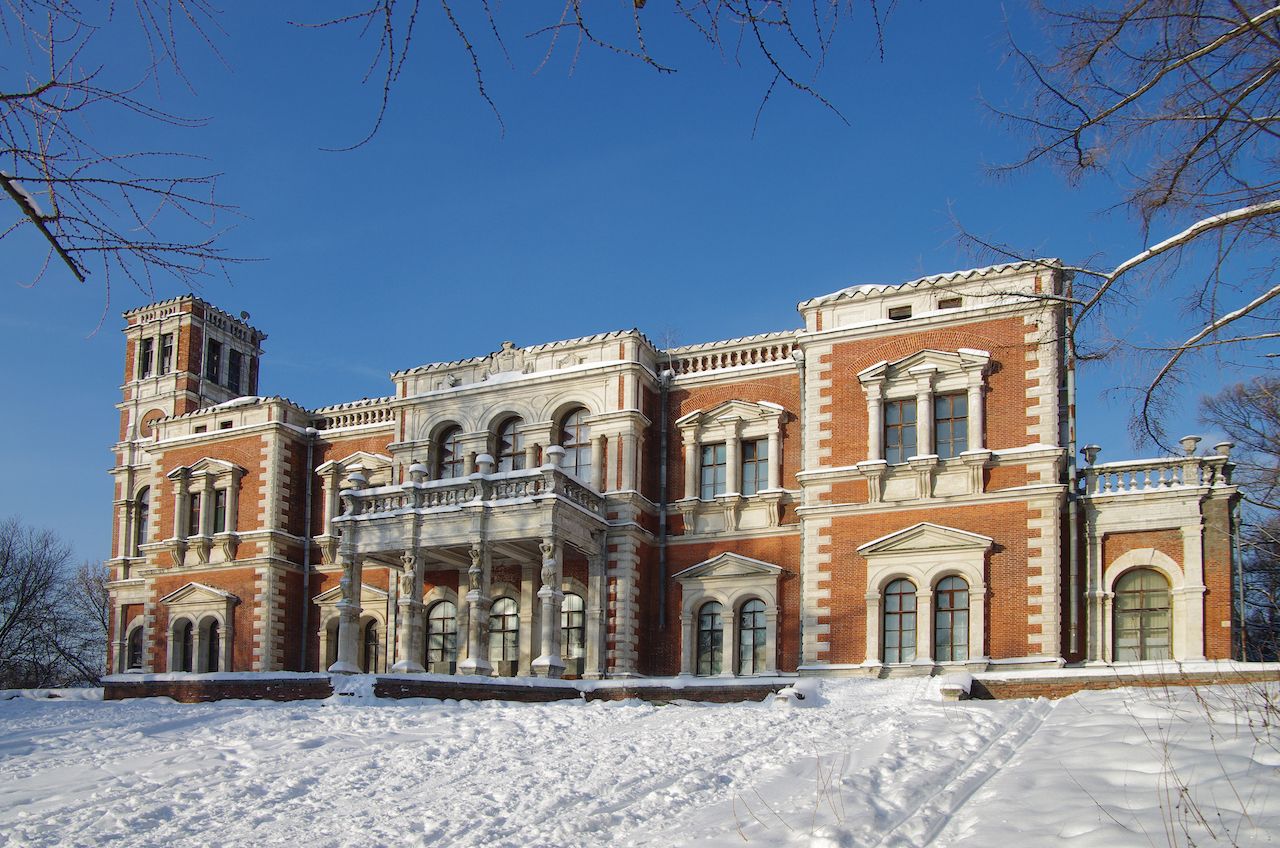 One of the most beautiful estates in Moscow, Bykovo — also known as Marino — unfortunately sits abandoned. The complex is comprised of the incredible Church of the Vladimir Icon of the Virgin, built in 1789 and said to have been designed by famous Russian architect Vasily Bazhenov; a palatial manor rebuilt in 1856, which served as a tuberculosis sanitarium after the Bolshevik Revolution; and a rotunda by large pond, all of which sits on an overgrown, forested park.

Because the estate is neglected, it is not possible to visit the interior of the manor; however, you can walk around and enjoy the architecture from the outside. In winter, the long slope in front of the manor serves as a tobogganing spot for local kids. Unlike the rest of the estate, the church is currently being renovated. It’s a bit of a trek to get to Bykovo by public transport, but if you have a vehicle or can afford a taxi ride, it’s only a 50-minute car ride from the center of Moscow. 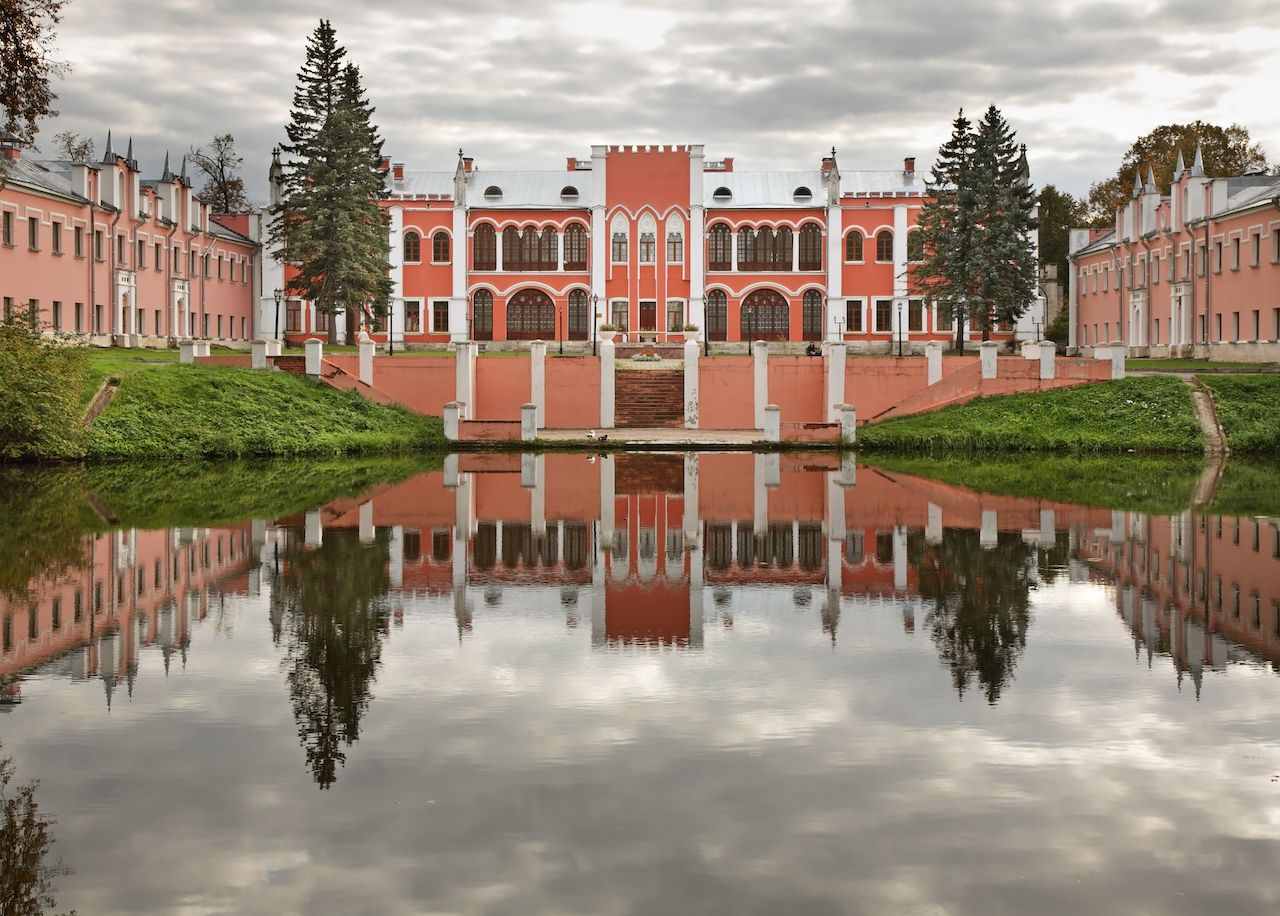 The Marfino estate is a unique and prime example of Gothic architecture in Moscow as it’s an ensemble where every building is of the Gothic style. After being burned down by the French in 1822, it was later rebuilt by famed architect Mikhail Bykosvky. The ensemble is comprised of a large park, large ponds, a beautiful bridge, stone gates, sculptures, the Nativity Church, a rotunda, a pavilion, and, of course, the red and white manor.

Currently, the estate hosts the sanatorium of the Ministry of Defense of the Russian Federation, so visitors need to present an ID before being granted access. The Marfino estate is located in the district of the same name, a 50-minute journey north of Moscow’s city center.

Culture9 Coolest Places You Need To Hit on Your Trip To Moscow
Tagged
Art + Architecture Insider Guides Moscow, Russia
What did you think of this story?
Meh
Good
Awesome

5 Ways To Save Money on a Trip To Moscow

5 Surprising Things I Learned as an American Tourist in Moscow

10 Ways To Humiliate Yourself in Moscow

The 5 Stages of Enduring a Russian Winter

How the Moscow Metro Parallels the Life of a Nation

A Day in the Life of an Expat in Moscow

What NOT To Do in Moscow