THERE ARE THE LEGENDS — chieftains, lady pirates, wailing banshees — that inhabit these structures. And then there are the castles themselves, some crumbling atmospherically, others polished and maintained as estates and hotels. However you choose to look at them, Ireland’s castles are simply extraordinary. Here are six of our favorites Castles in Ireland, along with tips on some awesome places to check out nearby when you visit. 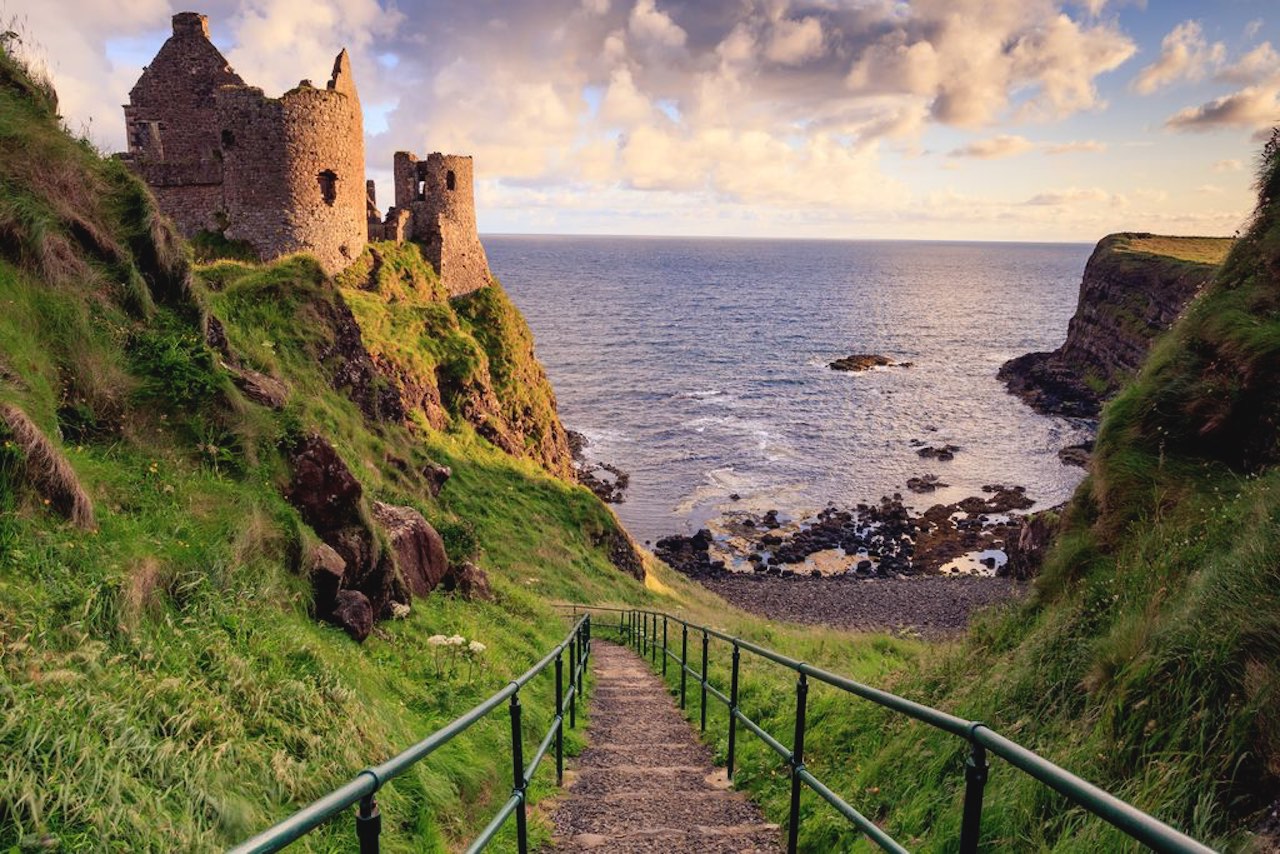 Who needs a protective moat when you can build your castle on the sea? This 16th-century ruin sits atop a razor-sharp basalt crag in one of the most spectacular locations in Ireland, attached to the mainland by bridge. Its precarious setting didn’t seem like such a great idea in 1639 — that’s when the kitchen apparently crashed into the breakers, taking seven cooks along with it and leaving only the trembling kitchen boy standing in what was left of the room. Once you see the view, though, you’ll understand why this spot was chosen.

Dunluce Castle is said to be the inspiration for C.S. Lewis’s Cair Paravel in Narnia, and was filmed (with digital enhancements) to represent the House of Greyjoy in Game of Thrones. As you enter, keep an eye out for the cannons in the gatehouses. They were taken from the treasure-laden Girona shipwreck by “Sorley Boy” MacDonnell — constable to the castle — when it crashed into nearby rocks in 1588.

In 2011, archaeologists rejoiced when they found the impressive remains of the “lost town of Dunluce,” which was razed during a local rebellion in 1641, in a major dig in the area. As a visitor, you can explore the excavations and get a sense of the old merchant town, with its cobbled streets and stone houses. And keep your ears open — it’s said that, under the right conditions, you might just hear the straining cries of the local banshee.

Also in the area: Dunluce Castle is one of many incredible stops on the Causeway Coastal Route, which also includes the Carrick-a-Rede Rope Bridge, the Old Bushmills Distillery, and the geologically spectacular UNESCO World Heritage Site of the Giant’s Causeway. The entire route is only 195 miles long, but can easily comprise five full days of sightseeing. 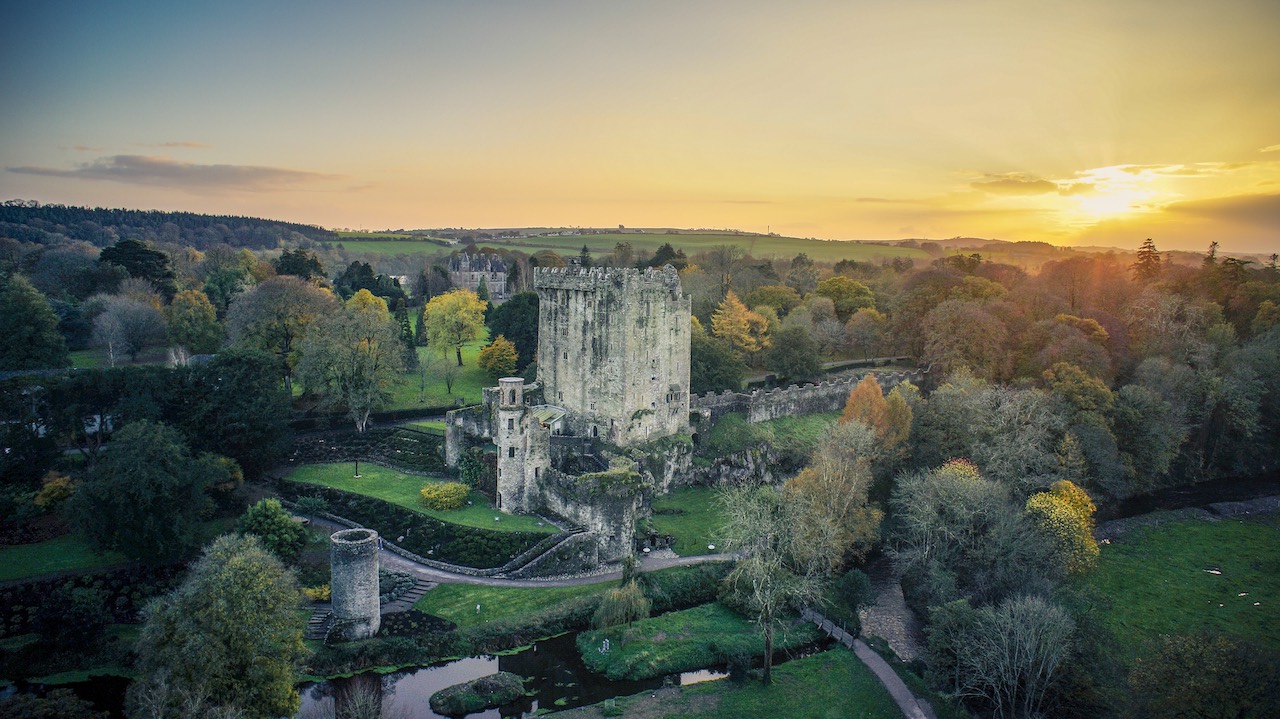 Built in the 15th century by the MacCarthy of Muskerry dynasty, the mostly ruined — yet still very grand — Blarney Castle must be one of Ireland’s most famous. That’d be thanks in part to its myths and legends, like that of the Stone of Eloquence — aka the Blarney Stone — said to give the gift of gab to all who kiss it. Just head up the spiral staircases, squidge into the gap in the battlements, and try not to think about the 10-story drop beneath your head as you do your thing.

You can spend hours visiting the preserved parts of the castle, the 19th-century Scottish baronial-style mansion, the ruins, and the giant grounds. A visit to the Poison Garden will have you thanking your lucky stars you don’t live in the Middle Ages. The planted opium, wolfsbane, ricin, mandrake, and cannabis were once used for medicinal purposes in a very practical test of the old dictum, “It’ll either kill you or cure you.” Some of the plants are even kept in cages, because…you never know?

As you wander the grounds, keep an eye out for fancifully named natural stone formations like the Wishing Steps, Witch’s Cave, and the Druid’s Circle. It’s said that if you walk the castle’s Wishing Steps backwards with your eyes closed, you’ll be granted your heart’s desire.

Also in the area: Blarney Castle is six miles northwest of Cork city, Ireland’s second-biggest city. While you’re in town, check out the English Market and wander the scores of stalls selling local produce — including award-winning cheeses and amazing chocolate cakes — and sit down to eat at Farmgate Café, known for its rock oysters and fish chowder. Also check out the city’s galleries, like Lewis Glucksman and the Crawford Municipal Art Gallery, where there’s a permanent exhibit devoted to Irish women artists. 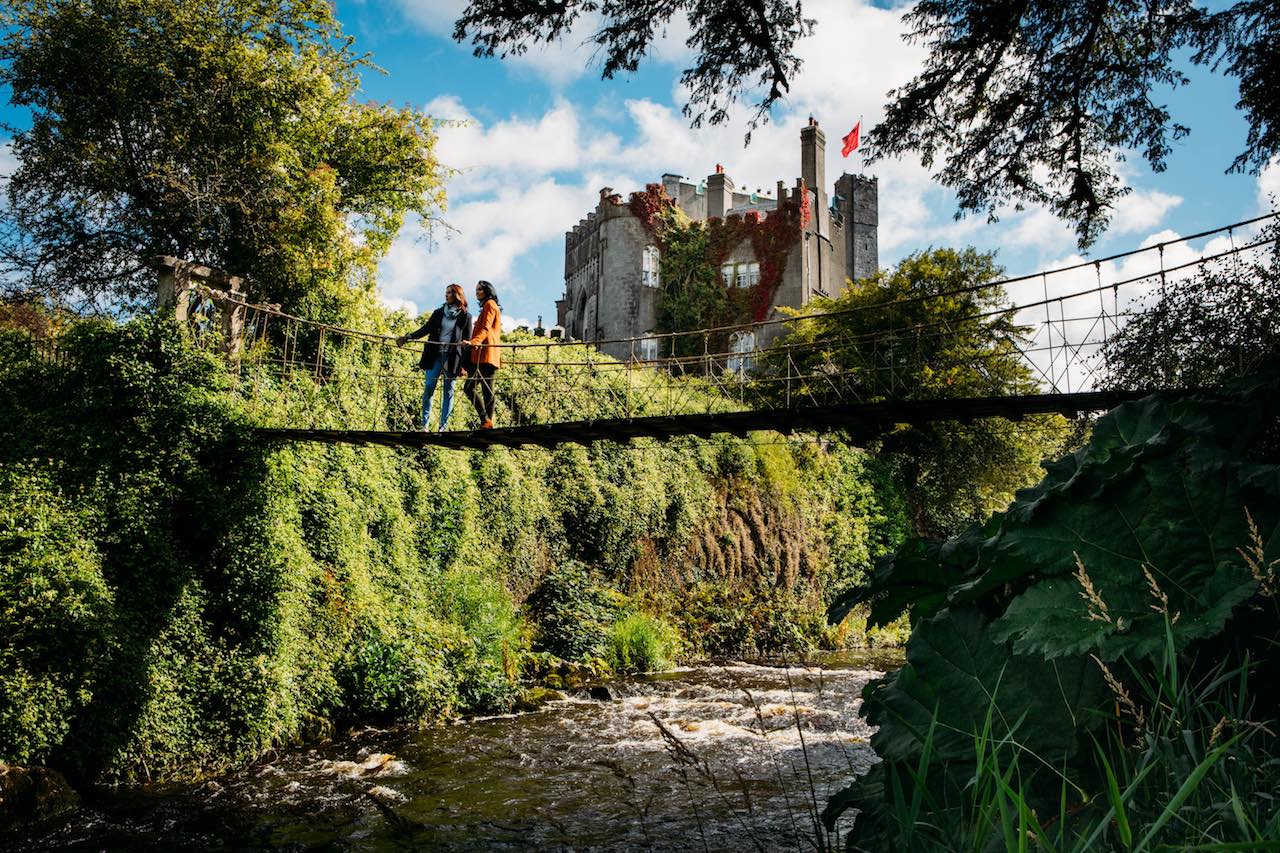 The Earls of Rosse have been calling Birr Castle home for around 400 years, and they’re quite the family. The 3rd Earl of Rosse was basically the Irish Galileo — in 1845, he built the largest telescope on Earth. It could capture more light and see farther into space than any telescope ever before. The discovery of spiral galaxies and the making of early maps of the moon’s surface? Both happened right here. You can check out the Rosse Telescope on a visit to the castle’s Historic Science Centre.

Then there’s the 4th Earl of Rosse, Laurence Parsons. He (and his mother) were well-known photographers in the 19th century, and you can still see the darkroom where they developed their images. It’s said to be the oldest on the planet that’s still around today.

Nowadays, Birr Castle is home to the 7th Earl of Rosse and his countess wife. You can visit the estate, wander the 50-hectare gardens, picnic by the lake, and marvel at the world’s tallest hedge in the walled gardens.

Also in the area: With its ice-cream-colored Georgian buildings on Oxmantown Mall and John’s Mall, the town of Birr is gorgeous. It’s got plenty of Insta-worthy spots, especially in mid-August when the Birr Vintage Week & Arts Festival comes to town. 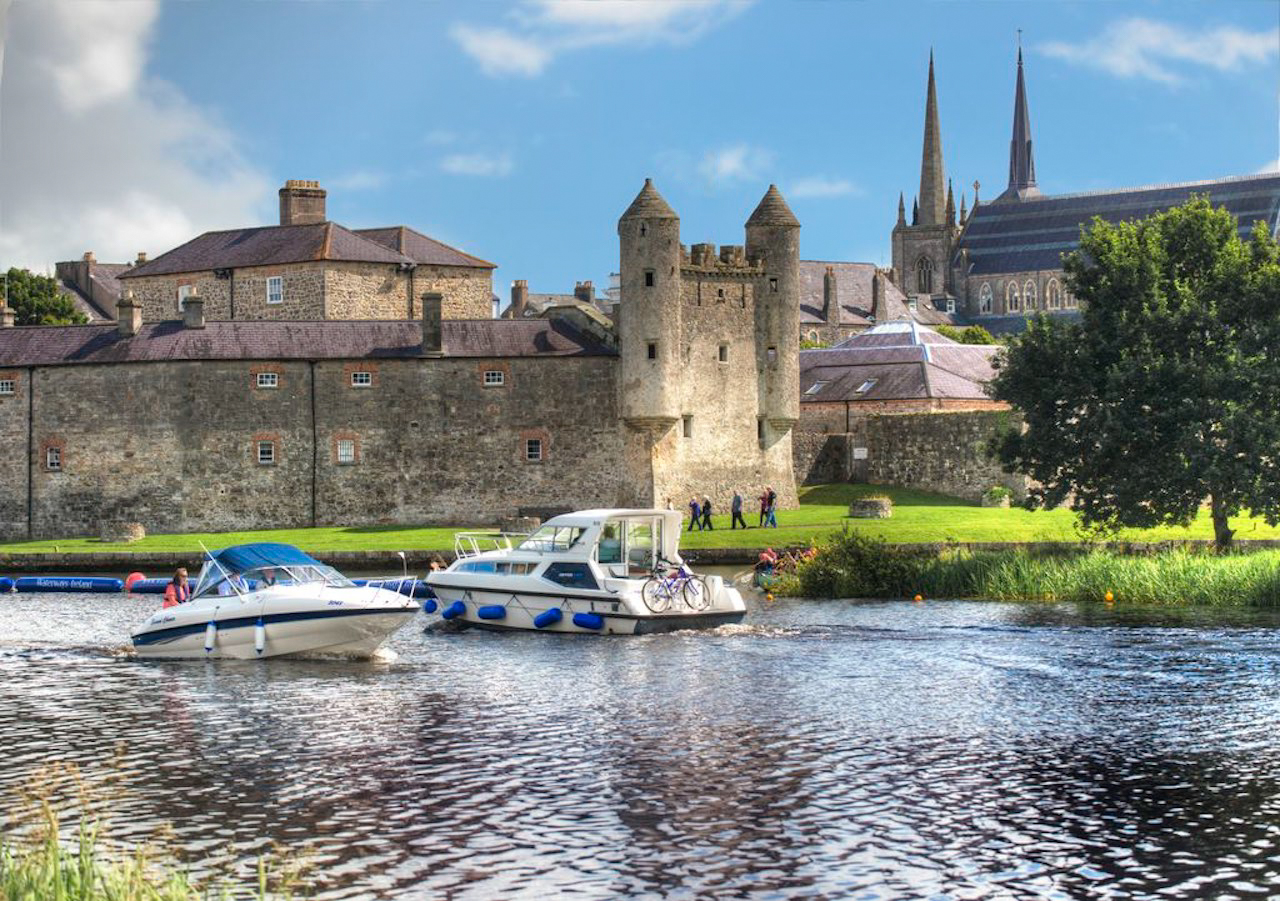 Once the stronghold of the Maguire chieftains, the magnificently turreted Enniskillen Castle has guarded the town from its location on the banks of the River Erne for nearly 500 years.

These days, Enniskillen is home to the Fermanagh County Museum, which details the history, culture, landscape, and wildlife of this historic county. Its collection of early Christian stone sculpture harks back to a time when this part of the world was known as the Kingdom of Lough Erne. Also visit the onsite Inniskillings Museum, home to a plethora of military regalia and dedicated to the Royal Inniskilling Fusiliers and the 5th Royal Inniskilling Dragoon Guards — dating back to the regiment that trained here to support William I’s army in the late 17th century.

If your great-great-great-great-grandmother was definitely probably Irish, it’s worth checking out the onsite Enniskillen Castle Museum’s Fermanagh Genealogy Centre. The lovely staff will give you a 30-minute family history advice session. Who knows, maybe you’ll find out you’re related to those Maguire chieftains…

Also in the area: The town of Enniskillen is buzzing, especially in summer when bars and restaurants — like the town’s newest gastropub, The TapHouse — are at their most lively. 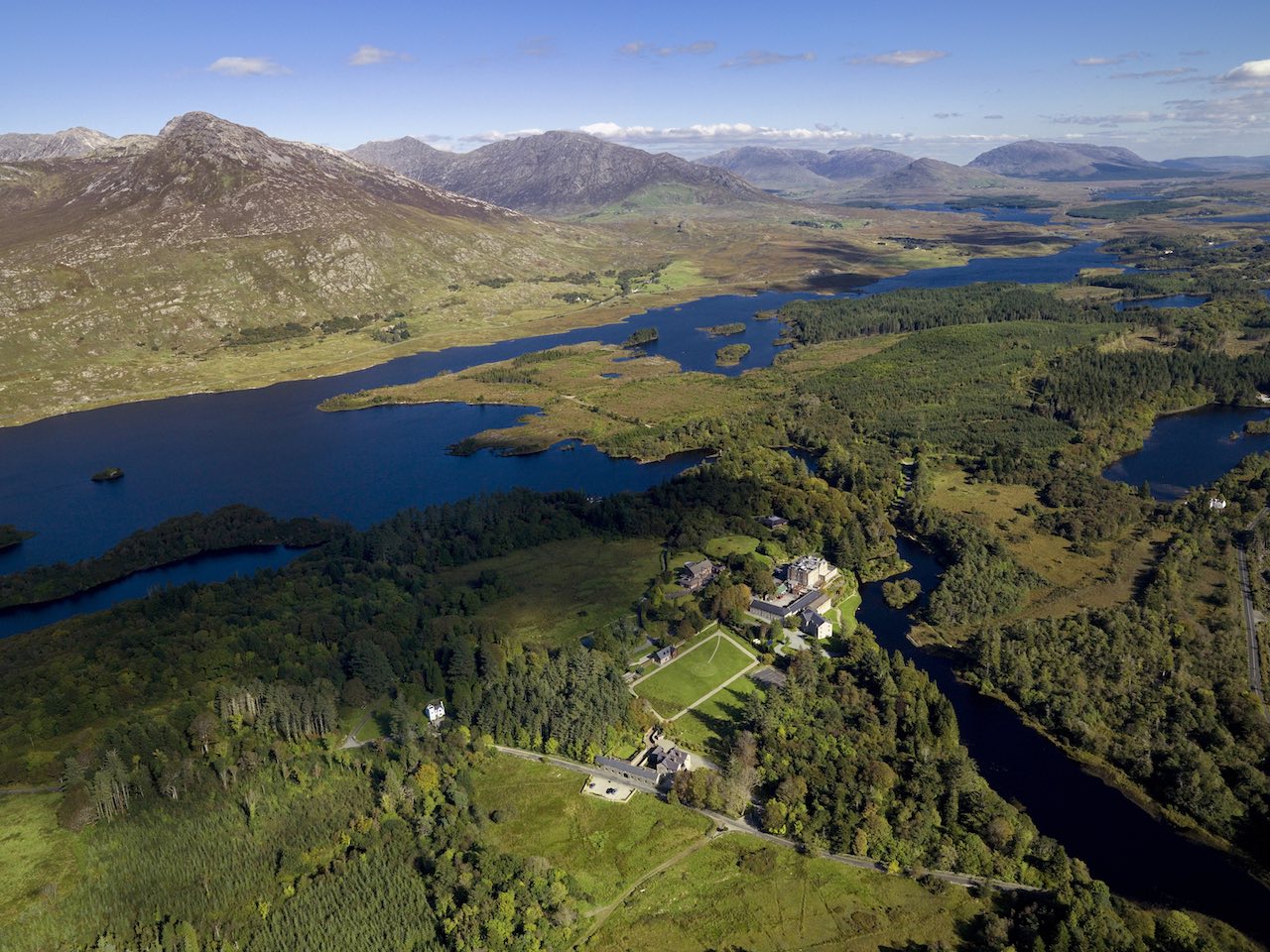 This 17th-century castle was home to one of the most feared pirate queens and chieftains in history. Yes, Grace O’Malley and the “Ferocious O’Flaherty Clan” once graced these halls.

When Grace was a kid, she wanted nothing more than to go off on adventures with her sea captain father. Her mother wasn’t too impressed by Grace’s ambitions — she believed a young lady’s place was in the home, and told her that all her long hair would get caught in the ship’s ropes. According to the story, Grace cut off her red hair and went to sea anyway, trading, pirating, and plundering as far away as Spain and Portugal.

Many legends survive about Grace. She’s said to have fought off attack by Turkish pirates just a day after giving birth, and is believed to have proposed to her second husband purely because she wanted his castle. She apparently divorced him a year later with a simple, “I dismiss you.”

Okay, but about the castle itself. It’s stunning, as is the entire 450-acre estate on which it sits. You can stay overnight here in a four-poster bed with views out to the Owenmore River, and live it up country style with fly fishing or clay shooting lessons. Or just head to the castle’s Fisherman’s Pub for a pint and catch of the day by the fire.

Also in the area: Ballynahinch sits at the foot of the Twelve Bens mountain range and within striking distance of the ruggedly gorgeous Connemara National Park. Go hiking and cycling around the castle to get to know what Oscar Wilde described as Connemara’s “savage beauty.” 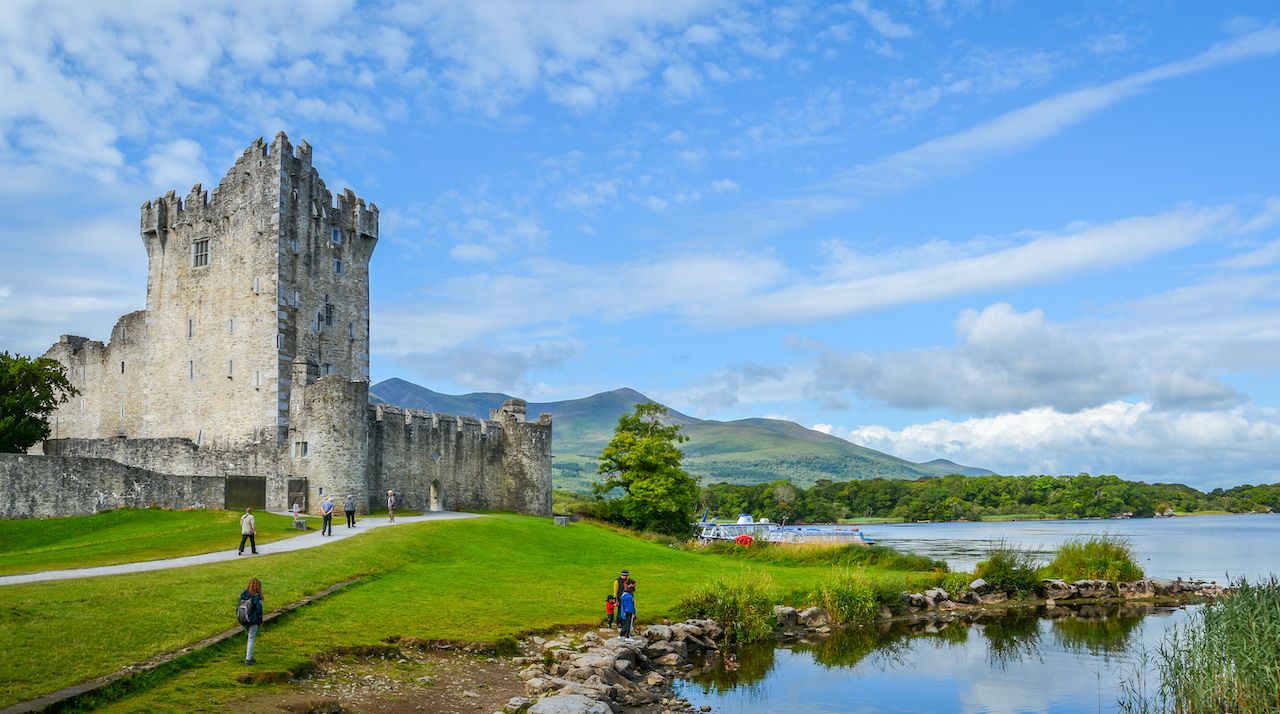 On the banks of Lough Leane in Killarney National Park, this is one Celtic fortress you’ll definitely want to spend lots of time at, if only because it’s said that everyone who catches a glimpse of the resident ghost of O’Donoghue Mor will be blessed with good fortune for the rest of their lives. Every seven years, he supposedly rises from the depths of the lake to circle Ross Island on his glorious white horse. The rest of the time, says the legend, he hangs out underwater with his horse and his library for company.

You can tour Ross Castle, one of the last strongholds to fall to Cromwell’s army in the 17th century, to get a taste of that O’Donoghue life, but the history of the island’s habitation goes all the way back to the Bronze Age some 4,000 years ago. It’s also worth heading out on a boat trip from the castle, stopping off to visit the millennium-old ruins of Innisfallen Abbey as you cruise.

Also in the area: The woods, waterfalls, lakes, and 3,000-foot-tall mountains of Killarney National Park are ridiculously scenic and well worth exploring, as is the town of Killarney, a couple of miles from the castle.

This post about Castles in Ireland is proudly produced in partnership with Tourism Ireland.
Tagged
Galleries Insider Guides Ireland Ireland: Uncovered
What did you think of this story?
Meh
Good
Awesome
✖
travelstoke
Download the mobile app
stoked by