Each year, more than 40 million tourists and wine enthusiasts flock to Tuscany to enjoy Italy’s most famous wine country. Just a few hours northwest, however, lies the lesser known and even less frequently visited wine region of Piedmont. Like Tuscany, Piedmont offers rolling hills covered with vineyards, quaint medieval villages, and fantastic local food and wine — all without the crowds you normally encounter further south. Piedmont is the perfect alternative to Tuscany for wine lovers, slow travelers, and those not interested in battling other tourists. Here’s why you need to visit this beautiful Italian wine region on your trip.

It’s out of the way, but still easy to get to. 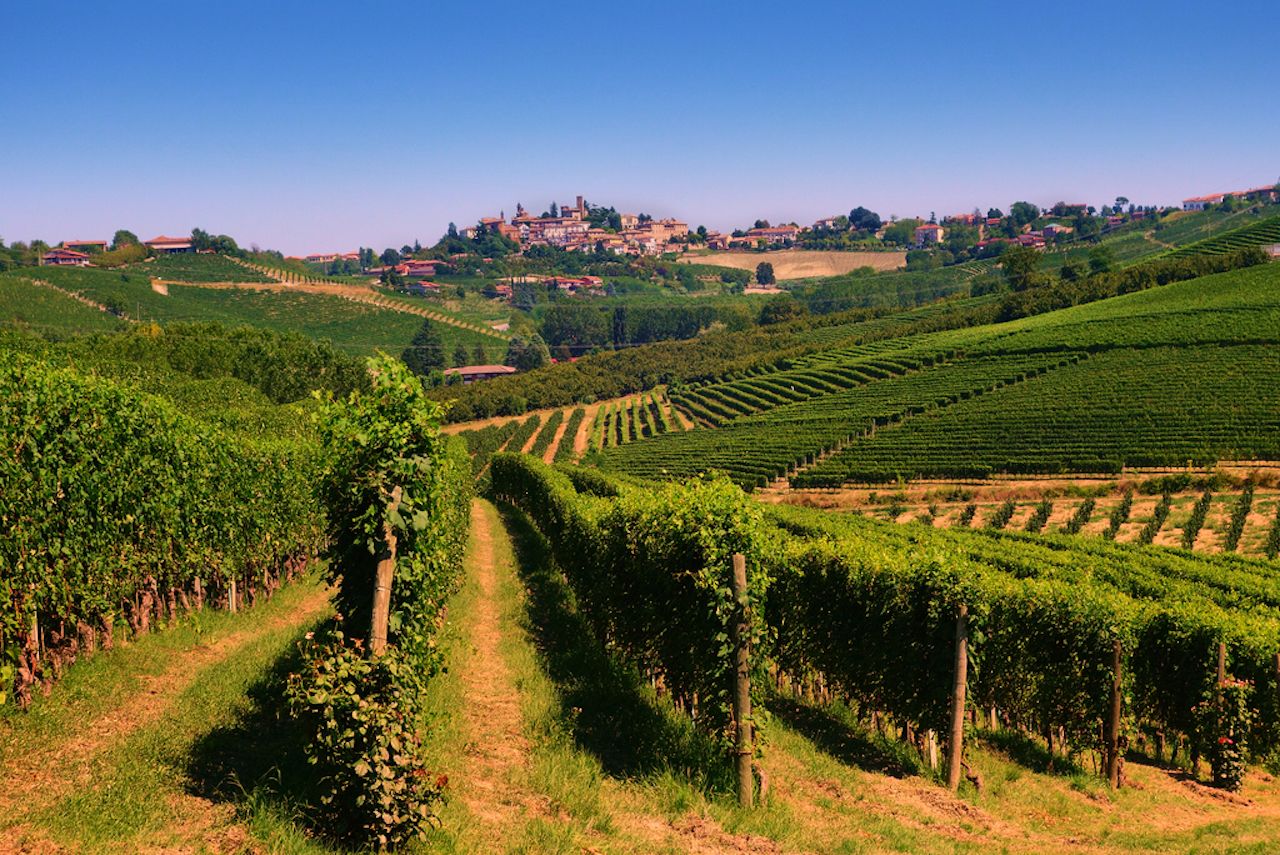 The easiest way to get to Piedmont’s largest city, Turin, or the smaller towns of Alba and Asti, is by hopping on the under two-hour train ride from Milan. You won’t need a car if you plan to stay in Turin, however if you want to visit the wineries in the southern Langhe region (home of the Barolo and Barbaresco wine areas) your best bet is to either rent a car and explore the region on your own, or arrange a driver or guide service since the area is rural and very hilly.

Piedmont, and especially the Langhe area, is mostly known for its red wines — Barolo, Barbera, Barbaresco — although bubbly, sweet Moscato is a popular white varietal. If you want to wine taste or tour specific properties, make sure you contact the wineries beforehand to make reservations via their website. Most are small family-run businesses that aren’t always staffed to take walk-in visitors. If you’d rather someone else take care of the planning process, ItaliAnna is a local company that offers guided tours of the entire Piedmont region, while Travel Langhe focuses on Langhe. Be sure to have them include some local food pairings along with the wine because, hey, you’re in Italy.

They know their food. 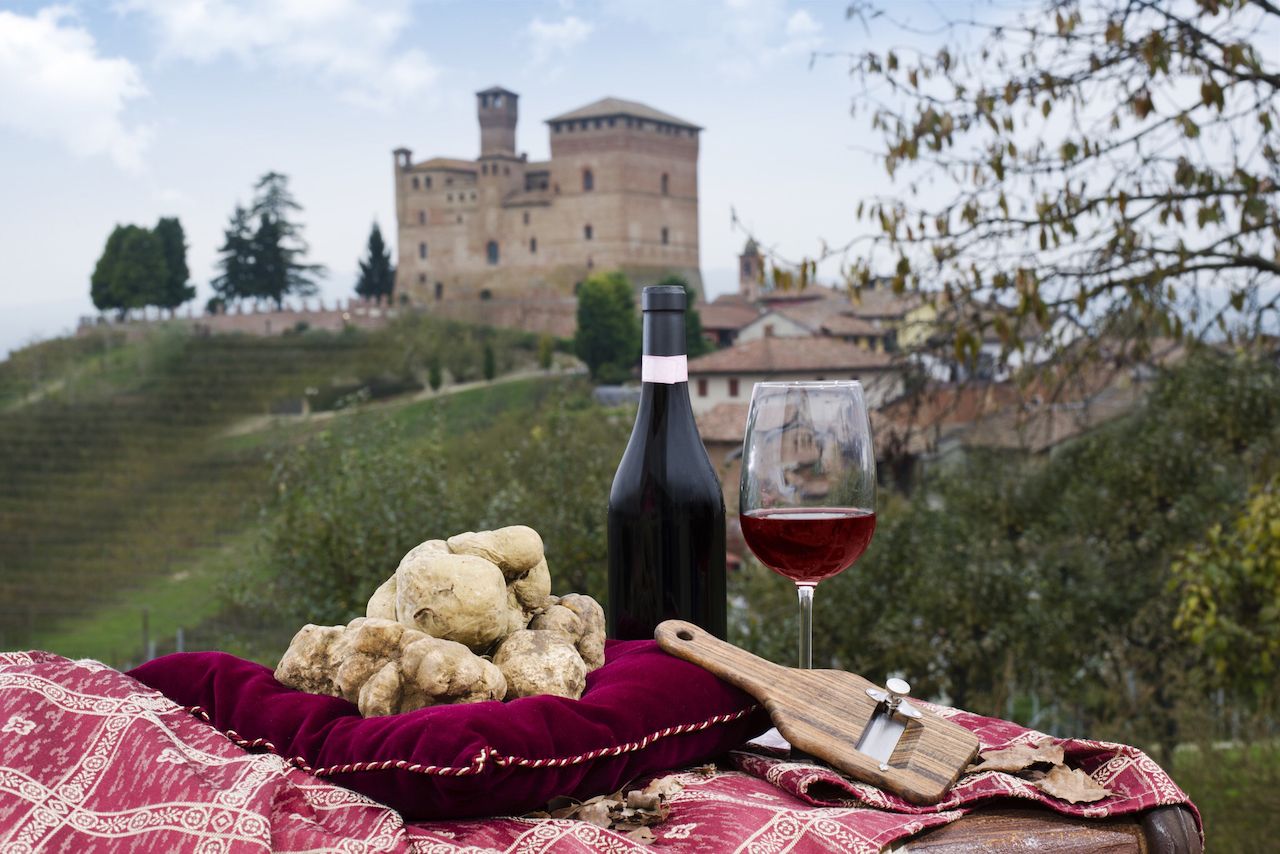 You won’t regret the decision to throw down on your meals, as Piedmont has no shortage of delicious food options. In fact, the town of Bra is the birthplace of the Slow Food Movement, a grassroots organization started to fight against fast food culture and the disappearance of local food traditions. Restaurants all around the area tout the mantra, and meals are intended to take several hours in order to enjoy the food, wine, and company.

There are also tours and events throughout the region if you’re looking to learn more about the farmers and other local food artisans. The town of Alba is particularly known for its white truffles. November is the high season for foodies who come for truffle hunting and the annual Alba Truffle Festival, where you can celebrate all things tuber — primarily stuffing your face with this delicacy that costs a pretty penny throughout much of the world. These fungi are foraged in the forest (where they grow underground) and can command insanely high prices in the market. If you’re there in season, take a truffle hunting tour where local foragers will take you out into the woods to search for them, or visit the local markets and shops to buy truffle salt, oil, or slivers of the tasty fungi itself.

If you’re more a fan of the chocolate truffle rather than the mushroom variety, you’re still in the right place. Piedmont has a long history with chocolate — it’s the birthplace of Ferrero Rocher and the chocolate hazelnut spread, Nutella. Turin hosts a chocolate festival in November called CioccolaTo where you can taste chocolates from master chocolatiers. It’s also the home of the traditional coffee drink bicerin, made of espresso, chocolate, and whole milk or cream. Stop by one of the many cafes in the city to try this creamy, decadent beverage.

You can walk through vineyards to medieval towns. 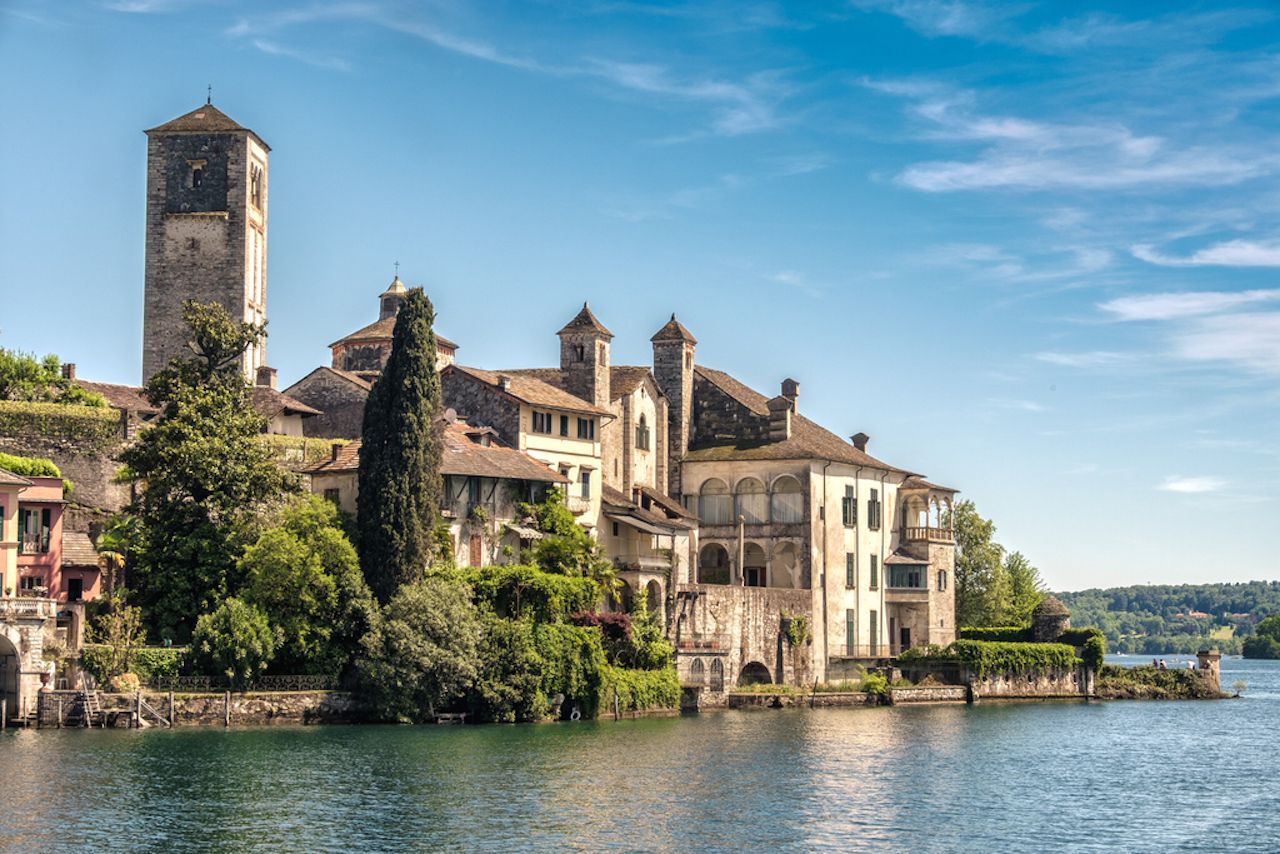 With all of the intake going on, you’re going to need to do a nice walkabout to settle the stomach. Spend a bit of time wandering around the countryside of the Langhe and you might start to wonder if you walked into a Hans Christian Andersen fairy tale. The roads wind through rolling green hills planted with neat rows of vineyards, while dark church steeples and shadowy medieval towers dot the landscape. The morning fog snakes through the valleys past walled towns while the Alps loom imposingly in the background. You’ll get a great view driving through the region, but one of the best ways to immerse yourself in the area is to follow the vineyard walking trails and hike between the medieval towns. These trails connect the villages so that you can wine taste without having to worry about driving. Meander through the gorgeous vineyards in this UNESCO region to towns such as Barolo and Monforte d’Alba for lunch or wine tasting

One area not to miss is the town of Barolo and its Nebbiolo-based namesake wine. The first Prime Minister of unified Italy called Barolo “the king of wines and the wine of kings.” You have your pick of wineries in the region, such as the regal Marchesi di Barolo, whose stately yellow building looks down at the town of Barolo from its high perch among the vineyards.If you don’t want to drive out to the wineries themselves, pop into a tasting room, or enoteca, in town. Local enoteche have wonderful selections from the area’s wine producers. Here you have the advantage of trying many different wines from local wineries all at once, without traveling out to the vineyards one by one. 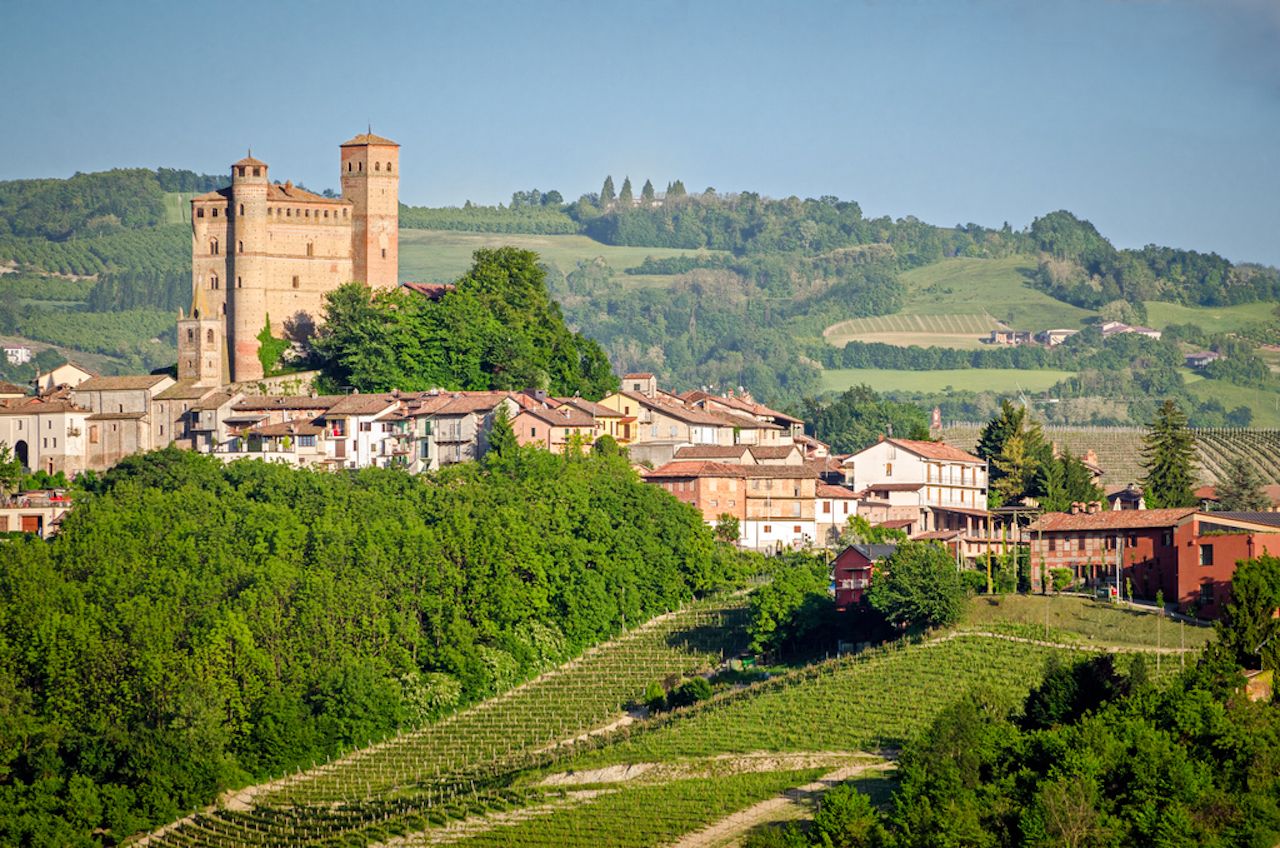 Piedmont has its share of museums to explore, some more off-beat than others. Turin is the place to see them with its extensive list of impressive museums, like the Museo Egizio, which has one of the best Egyptian collections outside of Egypt, and the National Museum of Cinema, which houses cinema and film artifacts from around the world. But smaller towns and villages like Barolo have their own assortment of quirky little places to visit, as well, such as the Museo Dei Cavatappi, which walks guests through the history of corkscrews, and Castle Falletti, which houses the Wine Museum of Barolo and the Enoteca Regionale. This museum has dioramas and interactive exhibits that explore the history of wine. It’s a bit out there, but worth exploring on a rainy afternoon.

From the medieval castles in the stone-walled towns of the Langhe to the neoclassical buildings of Turin, Piedmont also provides a wonderful record of Italy’s changing architecture. If you’ve had your fill of medieval towns and castles, take a self-guided walking tour around Turin to explore different building styles. Here you’ll find tree-lined streets with structures that reflect the Renaissance, Neo-Classical, Rococo, and especially Baroque influences. Some great examples of Baroque architecture are the Royal Church of San Lorenzo with its geometric windowed dome and the curved facade of the Palazzo Carignano, both from architect Guarino Guarini.

Turin also has 11 miles of arcades (covered, arched walkways), most of which are interconnected, making it the largest pedestrian area in Europe. The arcades themselves are works of art with different materials used to pave the streets, columns, and ceilings, and they’re filled with shops and cafes. Via Roma is the best-known shopping street and the perfect spot to people watch, shop, or take an afternoon stroll before stopping for another glass of wine.

Insider GuidesThe 7 Most Exciting Places To Travel To Drink Wine in 2019
Tagged
Insider Guides Wine
What did you think of this story?
Meh
Good
Awesome

In the Shadow of Monte Rosa: a Travel Journey From a Remote Italian Alpine Village