We’re big believers in stepping away from pre-packaged travel experiences and getting elbow deep in assembling your own. The research and autonomy needed to pull off a do-it-yourself adventure in Africa can make it a richer experience — for a cheaper price tag. Here are some helpful tips for shaving some dollars off your African safari, which will also land you an adventure that is truly unique.

Explore one country in depth. 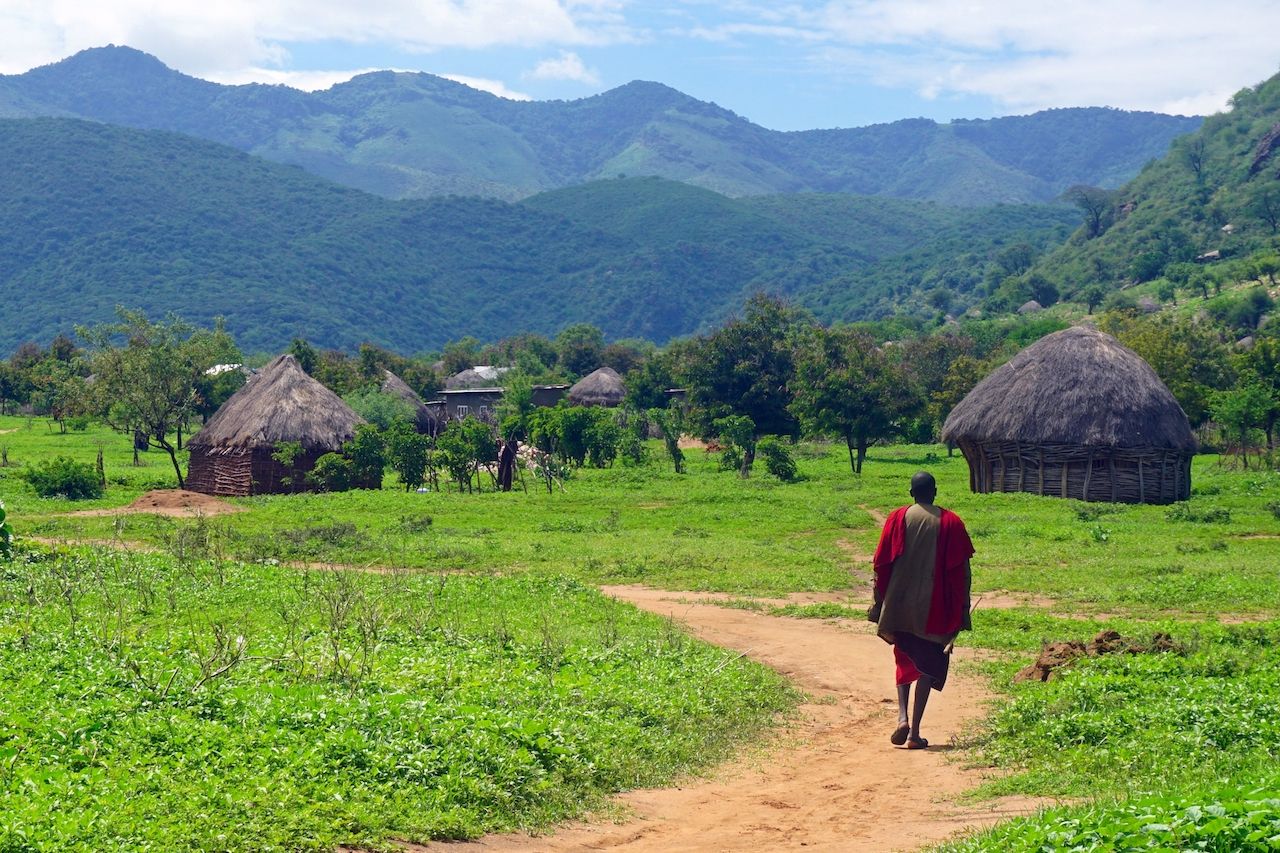 When traveling to a part of the world you rarely visit or might not get the chance to visit again, it’s understandable to want to do it all. Plus, with European tour packages offering seven countries in 15 days, who could blame you for wanting to get the same out of your African adventure?

Here’s the thing, though: Africa is enormous. You could fit the continental US, China, and India into the African landmass and still have room for most of Europe.

While a full African tour is possible, it’ll cost you. Going big with a transcontinental adventure isn’t the cheapest way to experience the wild pockets of Africa. If you want to travel on a budget, hone in on one particular country and dive deep into what it has to offer.

Did you grow up wishing you could sit quietly in the luscious green of a rainforest watching chimps like Jane Goodall? Then choose Tanzania or Uganda. If you want to experience rolling woodlands and the Big Five (African lion, elephant, leopard, black rhinoceros, and cape buffalo), think Kenya, South Africa, Botswana, or Zambia. Want to see more stars in the night sky than you could have ever imagined possible, and maybe even catch a glimpse of the elusive oryx? Visit the dunes and deserts of Namibia.

The wonderful thing is that within a single country there can be multiple ecosystems and biomes to explore. Figure out what it is you’d like to see and experience, then put in some research and find out which destination best suits your goals. South Africa alone can give you snow-capped mountains, fynbos, rainforest, desert, Highveld savannas, and the Indian and Atlantic Oceans.

Visit during the off season. 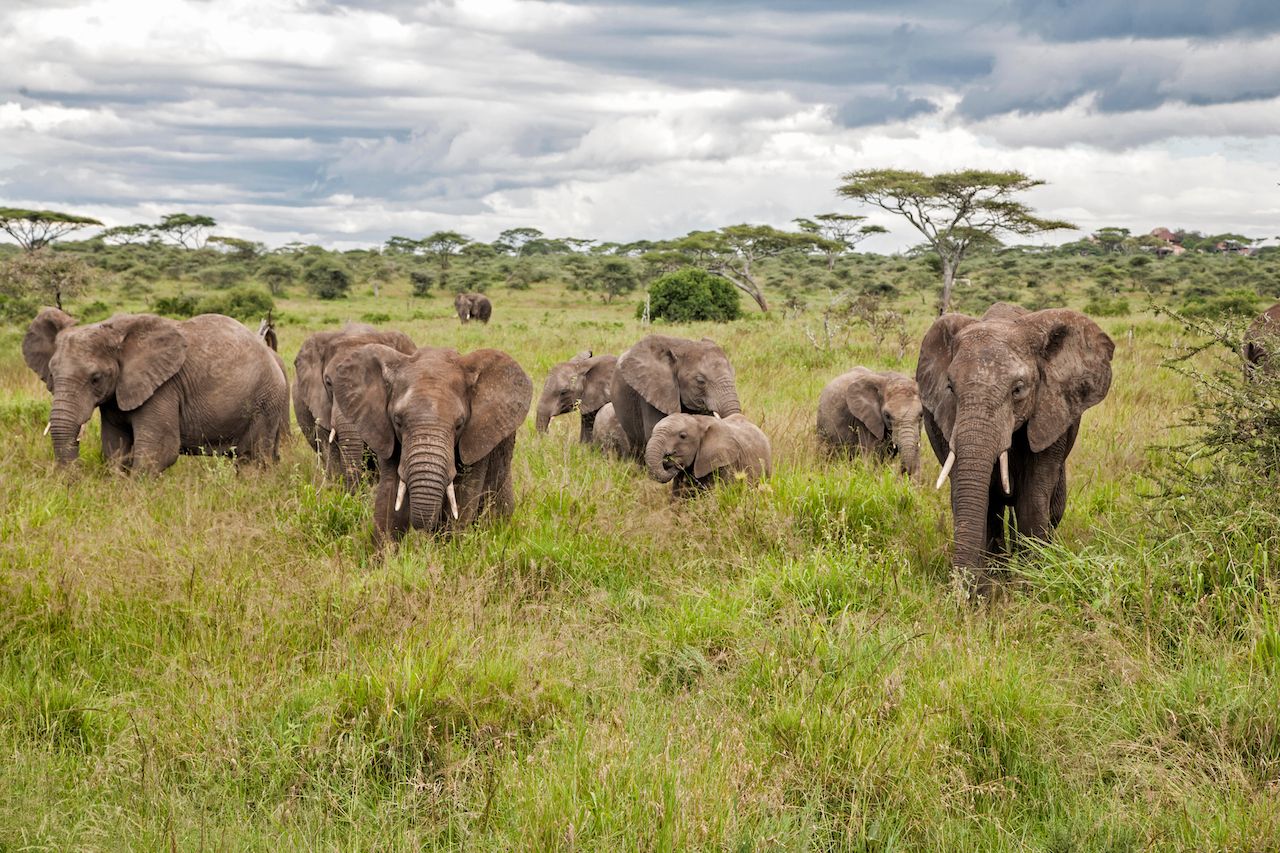 Most places in Africa don’t experience the four seasons that people in North America and Europe are used to. Generally speaking, there’s a dry season (roughly April to October) and a wet season (roughly November to March). Temperatures are cooler in the dry season and hotter in the wet season. The farther away from the equator, though, the more pronounced the temperature changes. Near the southern point of South Africa, Cape Town has warm summers and cool winters at opposite times to the northern hemisphere.

The dry season tends to be the best time to visit national parks. The cooler temperatures lend themselves to sitting in a vehicle and watching game animals all day. Also, it’s much easier to see wildlife in the dry season because there’s less foliage, and the scarce watering holes attract large numbers of different animals.

The big disadvantage of the dry season is that it’s more expensive. If you want to save money, go in the off season. The bush will be full and green, and you’ll see more birdlife and young wildlife yet fewer cars on the road. Besides, the best time to see wildlife is at dawn and dusk when things are cooler anyway.

You might just need a little more patience while staking out a watering hole. You should also be prepared to ask about accessibility in the rainy season, as some roads take a beating from erosion. On the plus side, you’ll probably get to experience mighty thunderstorms. 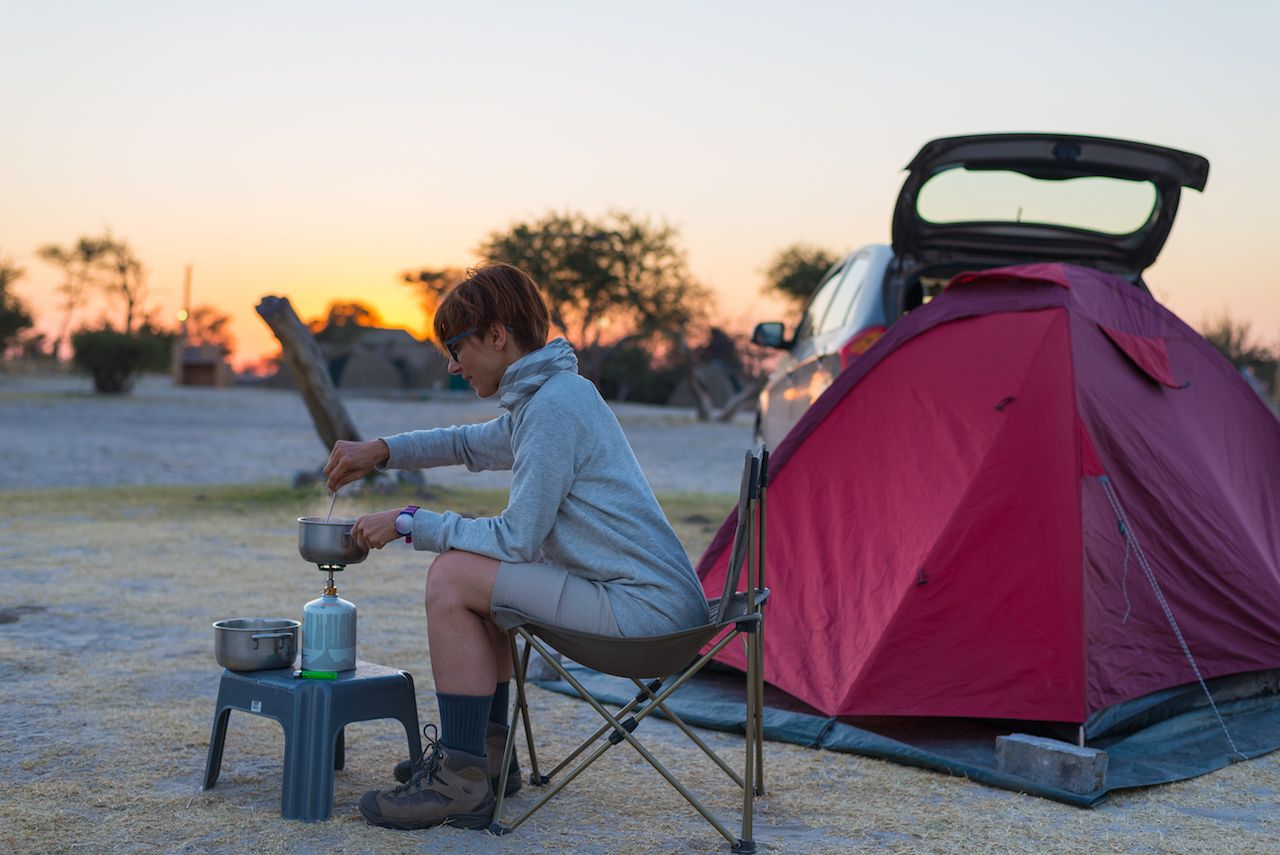 If any of us got offered the opportunity to stay at the five-star Bushmans Kloof Wilderness Reserve and Wellness Spa in South Africa’s Cederberg mountains, we’d jump at it. (Brangelina stayed there back in the day.) But let’s get real for a second. Anywhere that’s so fancy it doesn’t display its prices on the website is not going to be a budget option.

Besides, while the lap of luxury is lovely from time to time, there’s nothing quite like roughing it to give you an unfiltered wilderness experience. You can save a lot of money when arranging your accommodation by side-stepping safari lodges and opting for a no-frills campsite to pitch your tent in. If you’re not ready to rough it completely, you could also choose rest camps, which usually offer small huts or chalets, raised semi-permanent tents, or A-frames.

If you do choose to camp, keep in mind that you will be in a minimally curated environment. Depending on where you stay, there may be no safety nets whatsoever. Monkeys will try to steal your breakfast, so pack, store, and prepare your food with this in mind. Elephants will smell your oranges from miles away and do anything to get them, which is why you should never take fresh fruit to a national park. Hyenas will lurk just beyond the glow of your campsite fire and its sizzling meat, which will most definitely get your adrenaline going.

It’s important to understand that wild spaces are dangerous. You have a responsibility to be informed, but this should not put you off from roughing it. You’d be robbing yourself of the experience of falling asleep with nothing but the canvas of your tent between you and the sounds of the African wilderness at night — sounds which are deeply embedded in our collective DNA.

All you need is some good horse sense and to keep in mind some key points, including these: 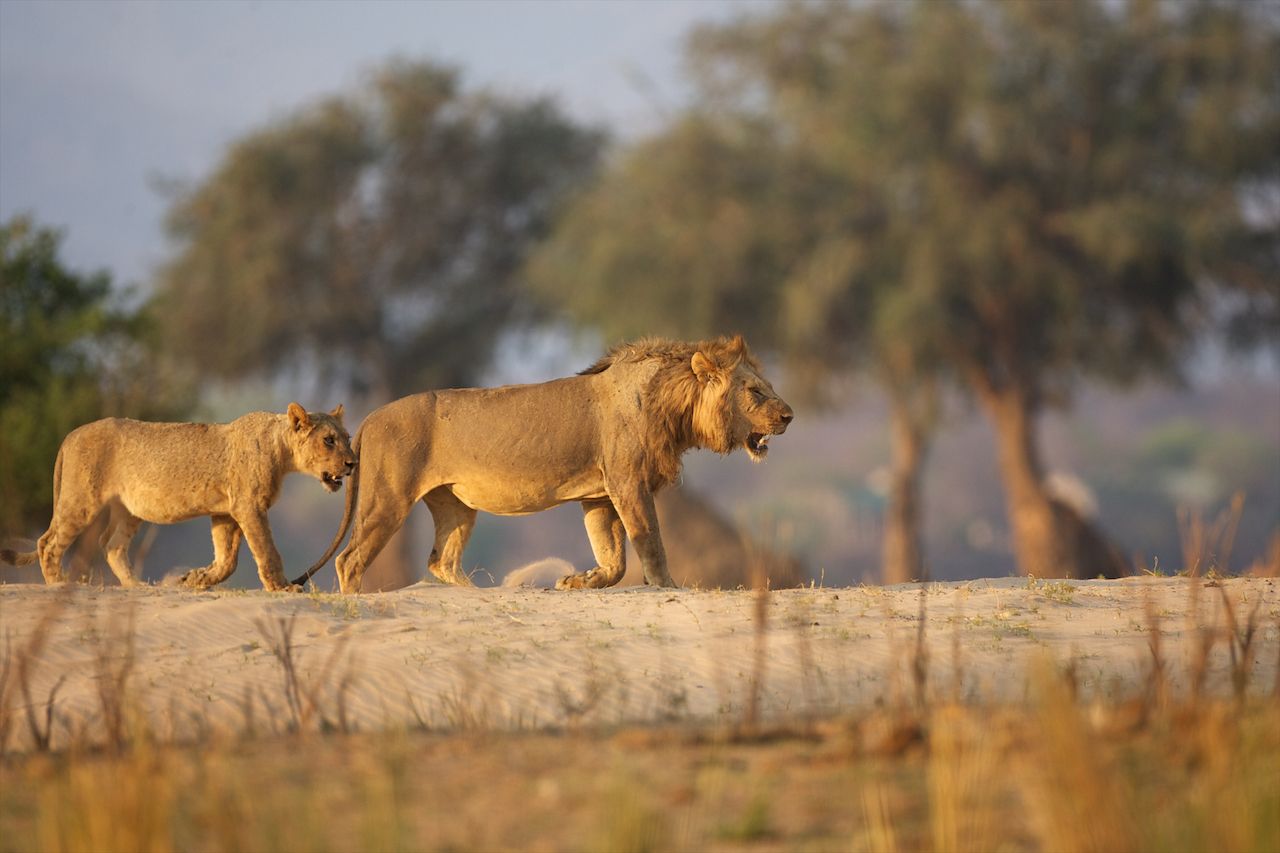 The Maasai Mara National Reserve and Kruger National Park are household names. They’re famous for a reason, but with celebrity comes higher prices. You can have cheaper, and often wilder, experiences in lesser-known national parks.

This just takes a little bit of research. Leave Kruger’s tarred roads behind in favor of the red-dirt roads of Hluhluwe-Imfolozi Park, which is about six and a half hours away by car. It’s the oldest nature reserve in Africa and has the largest population of white rhino in the world.

We’ve rarely come across a wilder place than Zimbabwe’s Mana Pools National Park. There’s very little infrastructure. There are no fences. It’s pure, untamed wilderness. This does mean, however, that you’re unlikely to get rescued if you get your 4×4 stuck in the mud. (As noted above, researching road quality in the off season is critical.) Then again, it doesn’t get much more DIY than getting ankle deep in mud and losing your shoes as you try to free the wheels of your truck!

Which brings us to our next point… 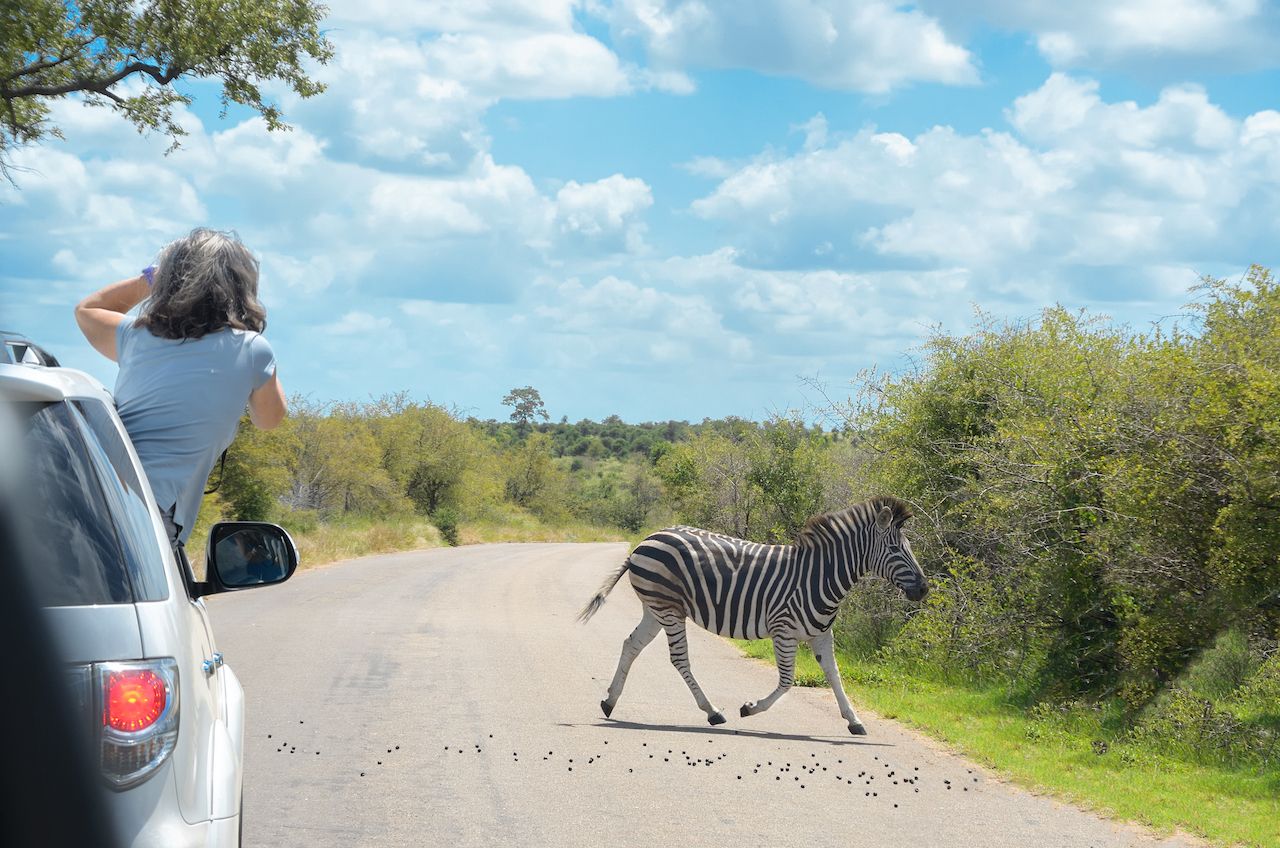 Many national parks have decent enough roads for you to explore without the need for a 4×4. If you’re traveling in a small group, splitting the rent and fuel for a decent sedan or hatchback would be cheaper than a choosing a guided safari. You’d also be a lot freer to plot your course across the country you’ve chosen to explore.

Driving yourself and camping rather than staying in a lodge are the two most significant ways you can add depth to your DIY safari. Both options require you to research, observe, and be humble. You will most likely be out of your comfort zone and realm of expertise. Use the opportunity to expand your knowledge and empower yourself.

Without the help of a guide, it will be up to you to research how to identify animals by their markings, spoor, and droppings; how to interpret their behavior; and how to behave safely and respectfully around them. There are all sorts of books and apps available to help you along the way, such as Sasol eBirds, which covers over 950 species with over 2,800 photographs and has audible calls for over 630 species.

If you haven’t had much off-road experience, research the dos and don’ts of driving in sandy, muddy, and/or wet conditions. Learn what to look for under the hood of your car and how to change a tire. You’ll have to rely on yourself, so be prepared. After you’ve seen just one animal in the wild, you’ll know the extra effort was worth it.

What You Expect From Traveling To Africa Vs. What You Really Get
Tagged
Budget Travel Trip Planning Wildlife Africa
What did you think of this story?
Meh
Good
Awesome