Cruising past the Ponte 25 de Abril, which, when I squinted, could have been the Golden Gate Bridge I’d left back home, I wondered if my passport might burst into flames. I was going to a communist festival in Amora, Portugal, hardly the sort of festival I’d envisioned myself attending during my summer in Lisbon.

The view from the ferry took me back to American soil where the word “communism” still lands with a thud. Yet for the people of Portugal, Lisbon’s rust-red bridge commemorates the Carnation Revolution that toppled the fascist Estado Novo regime, under which members of the Portuguese Communist Party (PCP) were persecuted.

On April 25, 1974, a group of left-leaning officers in the Portuguese army started a coup in the nation’s capital that would become a mighty, nonviolent civil resistance. As the regime fell, ending with it Portuguese colonialism, civilians passed out red carnations, many of which iconically wound up in the barrels of soldiers’ guns.

Two years later, an emboldened PCP threw the first Festa do Avante in Lisbon, naming the event after the party’s official newspaper, Avante! or Forward!. The festival has since grown, and moved, today drawing hundreds of thousands to the suburbs of Lisbon every first weekend in September.

A political festival that’s much more 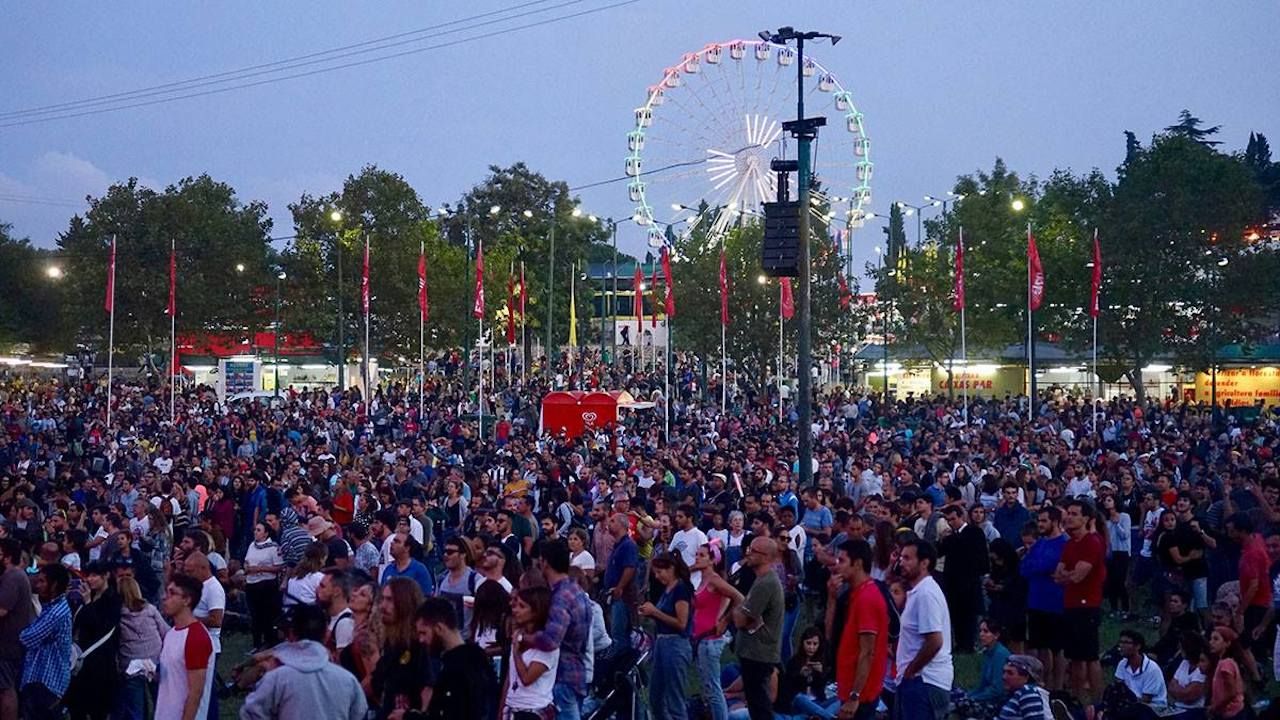 “Think of it like Glastonbury,” a friend who’d studied abroad in England told me, pitching the festival for the following Saturday. I’d never been to Glastonbury, but I couldn’t picture hammer-and-sickle flags flying during a Mumford and Sons set.

“It’s just a big party,” another added, sensing my skepticism. Minutes later, they’d break out into a chorus of PCP anthem “Avante, Camarada.” Though a joke, the exchange captured Avante perfectly. 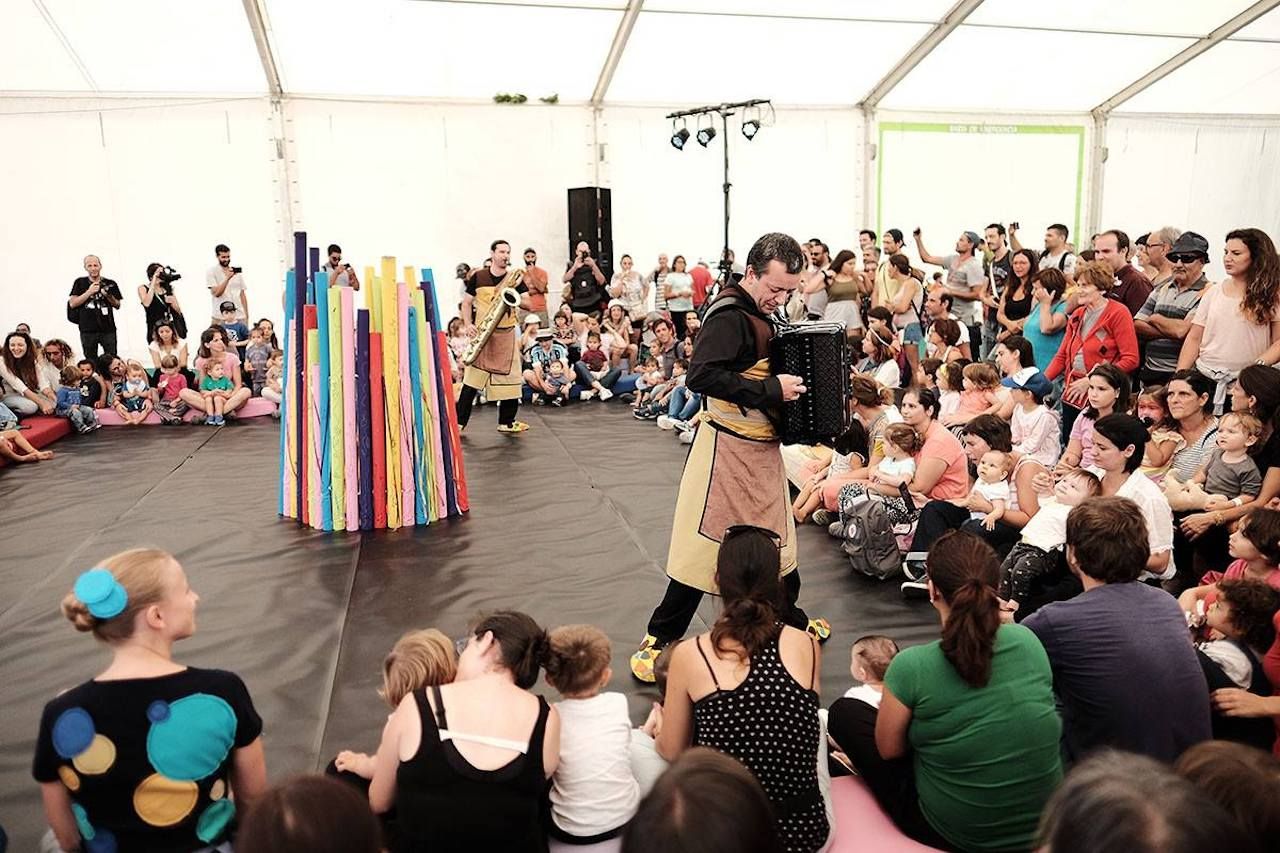 From a distance, Avante looks like any other festival, only larger. Ten stages shuffle through musical acts, theater and film screenings, and debates. There are book tents, art and science exhibits, and play areas with kid-friendly activities like puppet workshops and concerts for babies. There’s enough food and drink to represent all the flavors of Portugal, and there are sports for both spectators and participants, from martial arts matches to ballet, boxing, and Zumba classes.

Dedicated festivalgoers come for all three days, bringing caravans or pitching tents at the on-site campground, much as they do at Glastonbury and Coachella.

Up close, however, Avante announces its politics loudly. Rather than typical concert merch, booths here sell “Free Lula” pins in defense of Brazilian political prisoner Luiz Inácio “Lula” de Silva and t-shirts emblazoned with Marxist icons. Festivalgoers of all ages walk around with Che Guevara on their chests like kids in Nirvana tees at their first rock concerts. 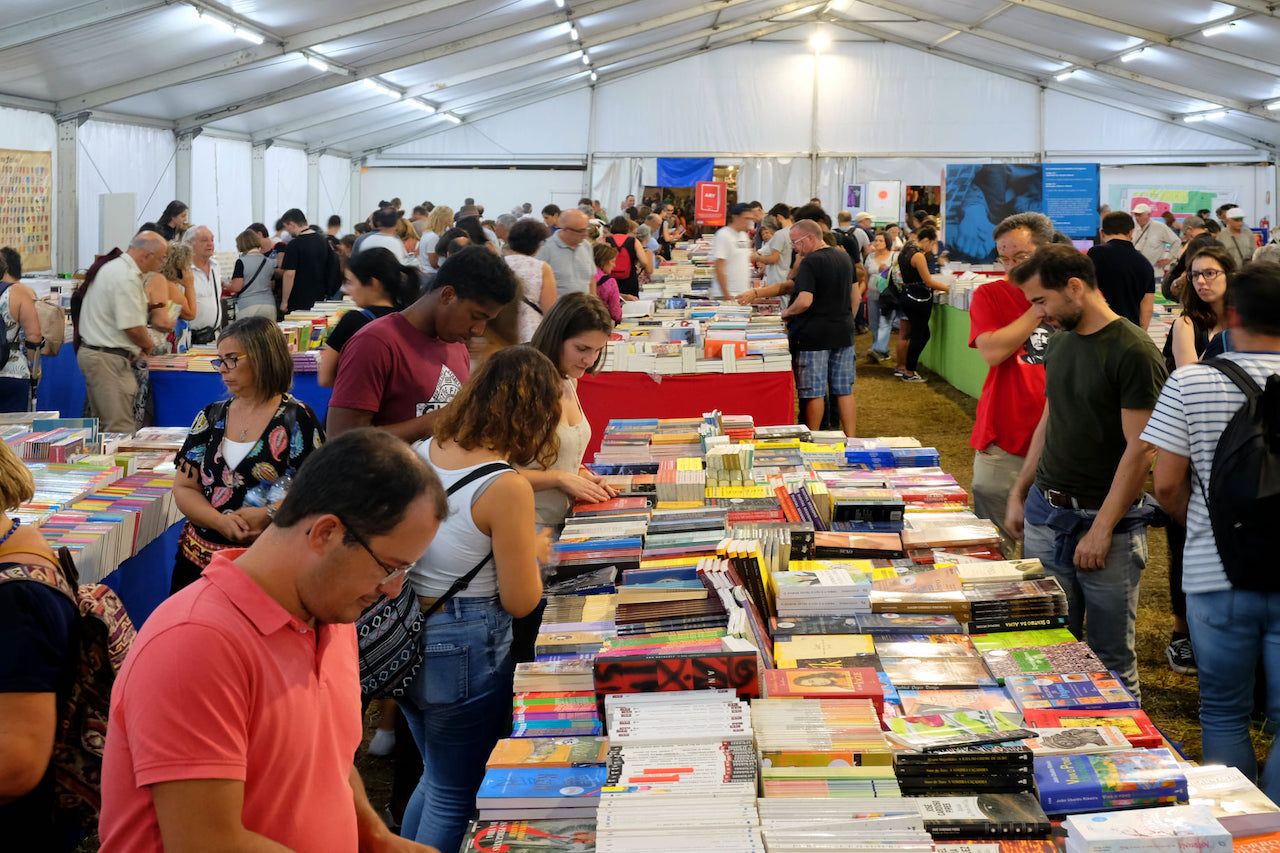 This year, among other tributes, discussions reflected on Portugal’s political past in honor of the 45th anniversary of the Carnation Revolution. Speakers recounted events like the 1969 students’ rights protest in Coimbra, home to the country’s oldest university, and the youth opposition to the Estado Novo regime in its dying days. Some who lived through these events shared their stories.

Celebrating past, present, and future 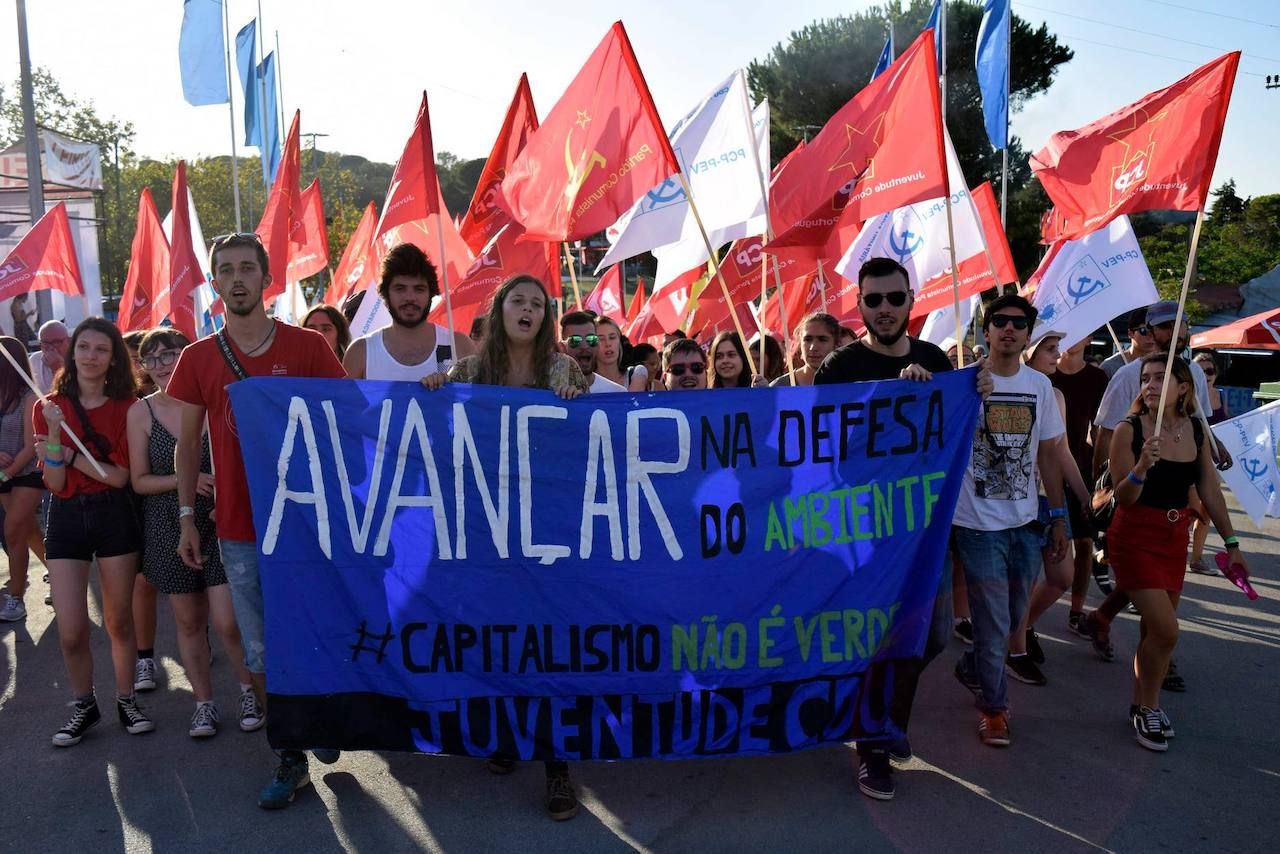 Debate is central to Avante. In light of Portugal’s revolutionary anniversary and the then-upcoming October 6 general election, which saw Prime Minister António Costa secure a second term, this year’s discourse was particularly weighty.

Though the prime minister belongs to the center-left Socialist Party, his administration is significant for the PCP. During the last election in 2015, Costa brokered an unprecedented, informal alliance with the PCP and Left Bloc after winning fewer votes than the center-right Social Democrats, clinching a parliamentary majority and claiming the premiership.

Few expected the minority administration to succeed. It was labeled a geringonça, or “contraption,” comparing the coalition to an unstable machine.

Since 2015, however, Portugal has seen impressive economic growth in the wake of the eurozone crisis, nearly eliminated its budget deficit, increased the minimum wage, lowered unemployment rates, and reversed austerity measures such as restoring four public holidays. Tourism and start-ups have also flourished in Portugal.

Failing to win a majority in parliament earlier this month, Prime Minister Costa has expressed interest in renewing the alliance with the PCP and Left Bloc, as have both parties and Portuguese voters. In return for its parliamentary support, the PCP advocates for social welfare programs and workers’ rights, as well as free textbooks in public schools and cheaper public transport. These same issues fuel Avante’s annual debates.

As the day goes on, the music gets louder 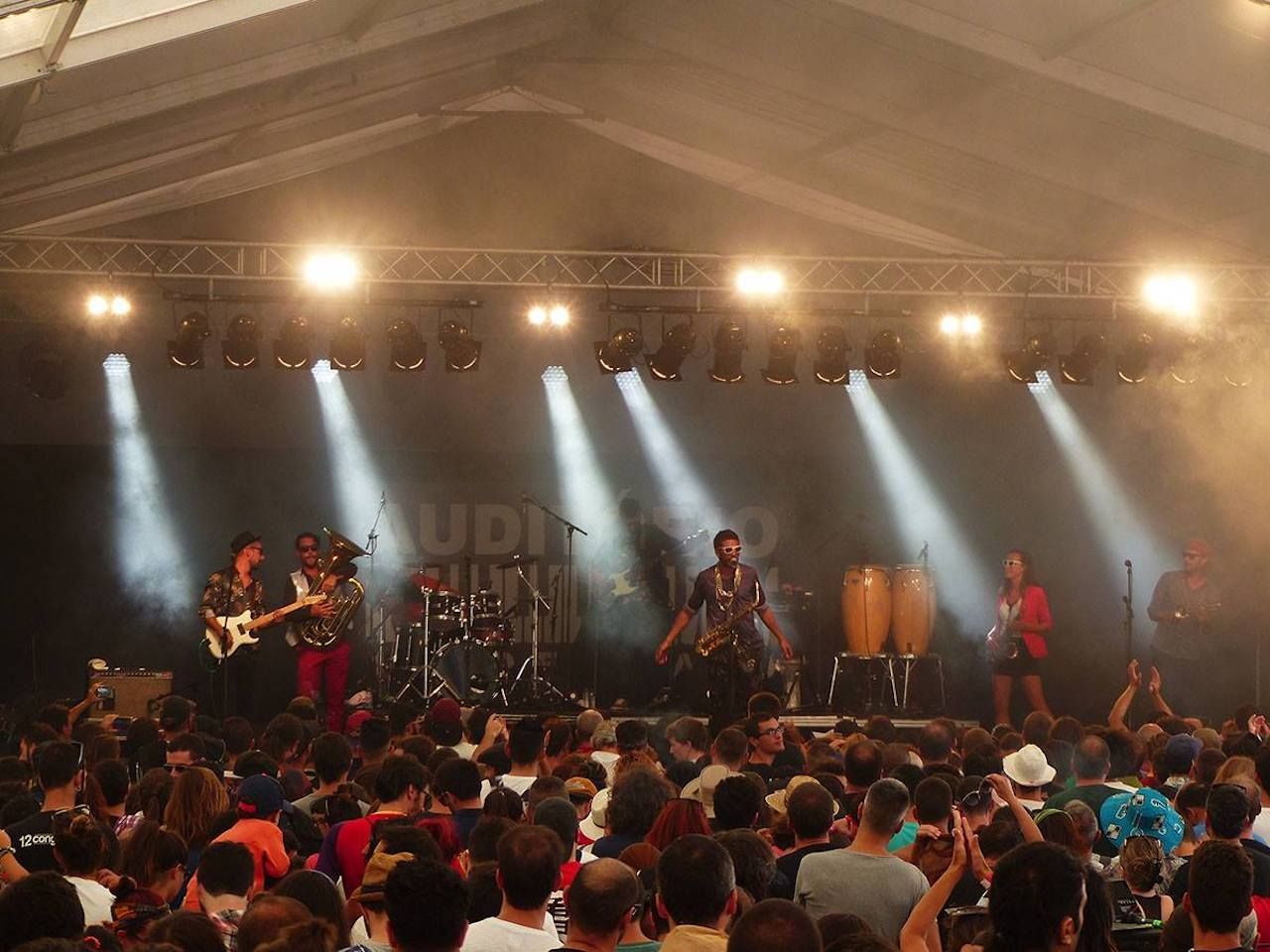 Daytime at Avante is a choose-your-own-adventure extravaganza of art, activism, education, and culture. Music plays throughout the day, whether an afternoon set by an indie band, a traditional fado performance, or a round of “Carvalhesa,” the communist anthem that always seems to be playing somewhere.

At night, the festival fulfilled my friend’s prophecy. The crowd that had earlier rallied around PCP General Secretary Jerónimo de Sousa, who opened the festival to loud cheering and a sea of red flags, morphed into a more familiar mosh of dancing festivalgoers.

In previous years, Richie Havens and The Band, both of whom performed at Woodstock in 1969, also played the festival, as did Dexy’s Midnight Runners of ‘80s-classic “Come on Eileen” fame. 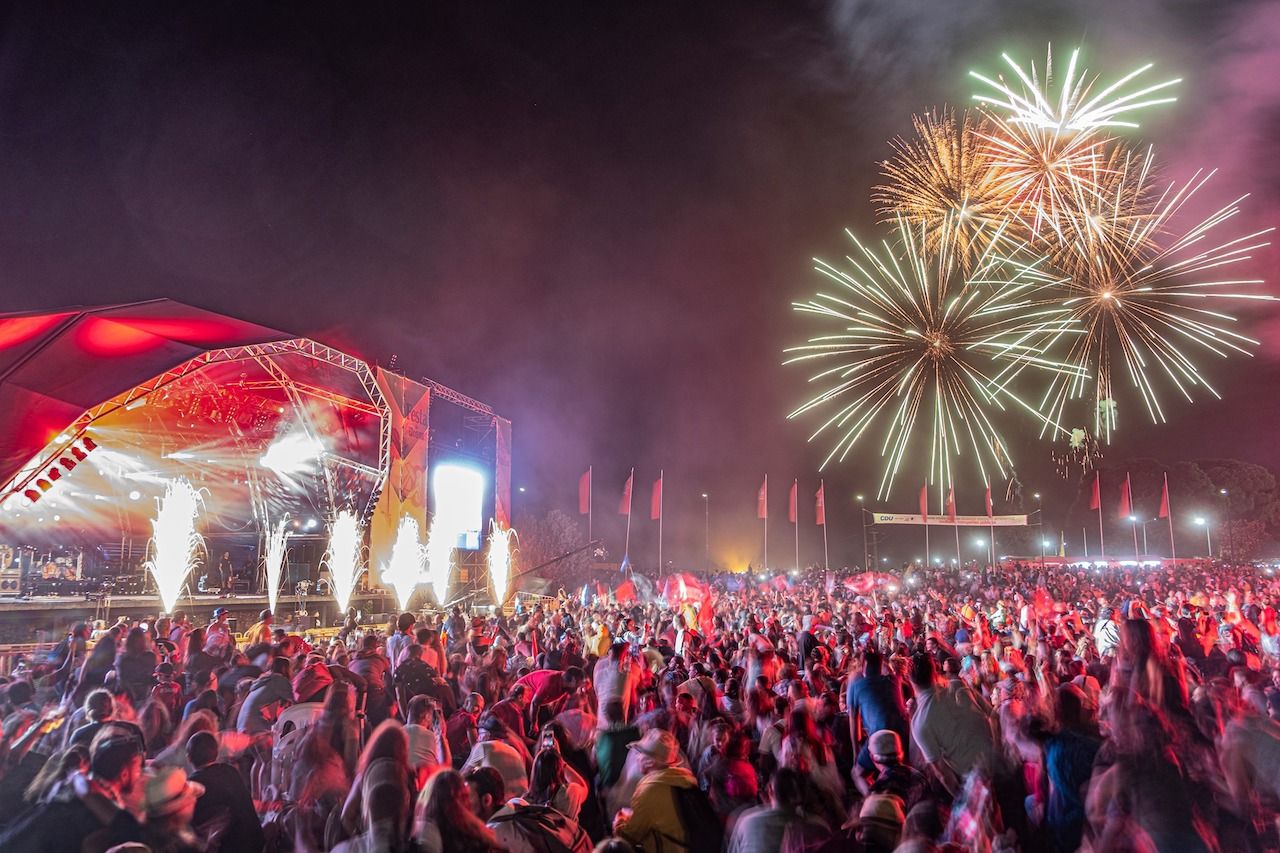 Avante is not Woodstock. It’s not Glastonbury, and it’s certainly not Coachella, though it is fair to call it a music festival. It’s also political, cultural, and contradictory, at once engaged and carefree, wholesome and a bit rowdy. In truth, it’s a fitting tribute to a country-defining revolution that’s been described as jubilant, festive even, and to an unlikely administration that’s finding leftist success when much of Europe is moving toward right-wing populism.

In an era in which the news cycle churns out more dramatic twists than soaps, Avante is the rare political festival that manages to be politics-optional. It may be hard to pin down, but one thing is certain: Avante is one hell of a party no matter how you vote — or, as it turns out, what country you’re registered to vote in.

Insider GuidesWhy You Can’t Leave Lisbon Without Visiting the South Bay
Tagged
Festivals Portugal
What did you think of this story?
Meh
Good
Awesome