Santiago de Querétaro, or Querétaro for short, is the capital city of the Mexican state of Querétaro. It’s among the most historical cities in the country, with a city center so beautiful and well-maintained that it has UNESCO heritage status for its Baroque-style Spanish colonial architecture. Where Mexico City is sprawling and can be overwhelming, Querétaro is approachable, walkable, and doable in a couple of days. If you’re an early riser and have a vehicle, it’s possible to do Querétaro as a day trip from Mexico City — but with so much unique architecture and so many sights to see, it’s worth staying overnight. Here’s what to see. 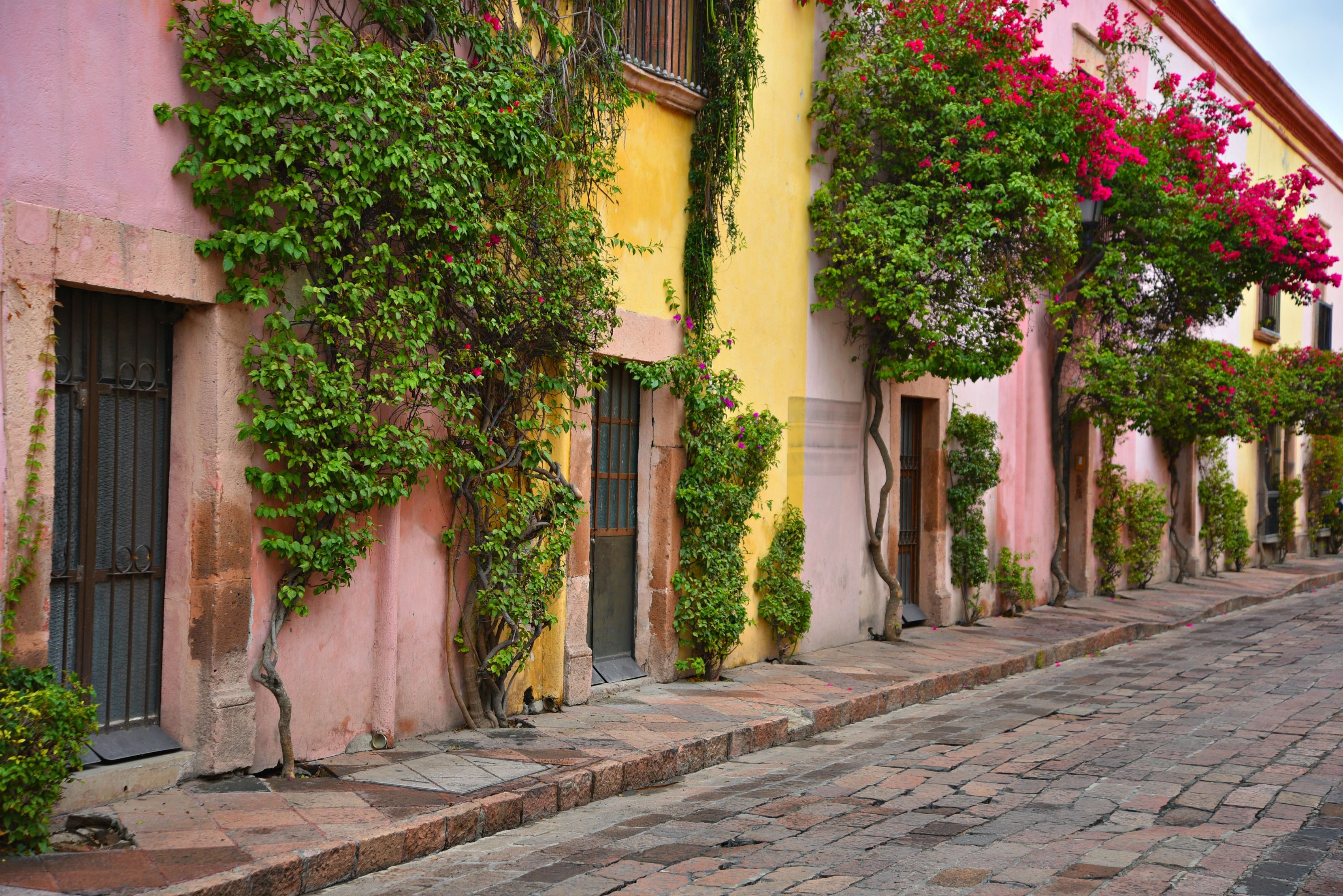 Santiago de Querétaro was founded in 1531, 12 years after Hernan Cortes began his overtaking of the Aztec empire. The city’s old town is the best-preserved of Mexico’s colonial-era cities, designed by the Spanish into two main zones — one for them, and one for the indigenous populations of the Chichimeca, Otomi, and Tarascan peoples. The old town is definitively Baroque, comprised of streets lined with pink stone row houses connecting multi-use public squares and hedge-lined gardens. As you walk the residential streets of Centro, it’s nearly impossible not to become jealous of the people living in these beautiful homes. Be sure to stop by the Zócalo, or town square, for a beer or coffee at one of the busy cafes overlooking the center. Bring a map, print or digital, with you on the walk because it’s easy to lose your way on the meandering streets.

As stunning as the brightly colored colonial homes are, Querétaro’s most famous architectural work is the massive, 18th-century aqueduct that runs through the heart of town. The aqueduct is over 4,000 feet long and made up of 75 massive arches, illuminated at night by bright spotlights that make the structure visible from any elevated point in town. Construction of the aqueduct was completed in 1738, and for over two centuries, it was used to carry water into Querétaro from the nearby El Ojo de Agua del Capulín spring. Despite no longer functioning in that capacity, it is preserved as a defining characteristic of the city’s facade. You can drive through the arches at multiple points in the city center, but it’s best viewed from the top of the Loma de Sangremal, a small hill opposite the Centro Histórico. 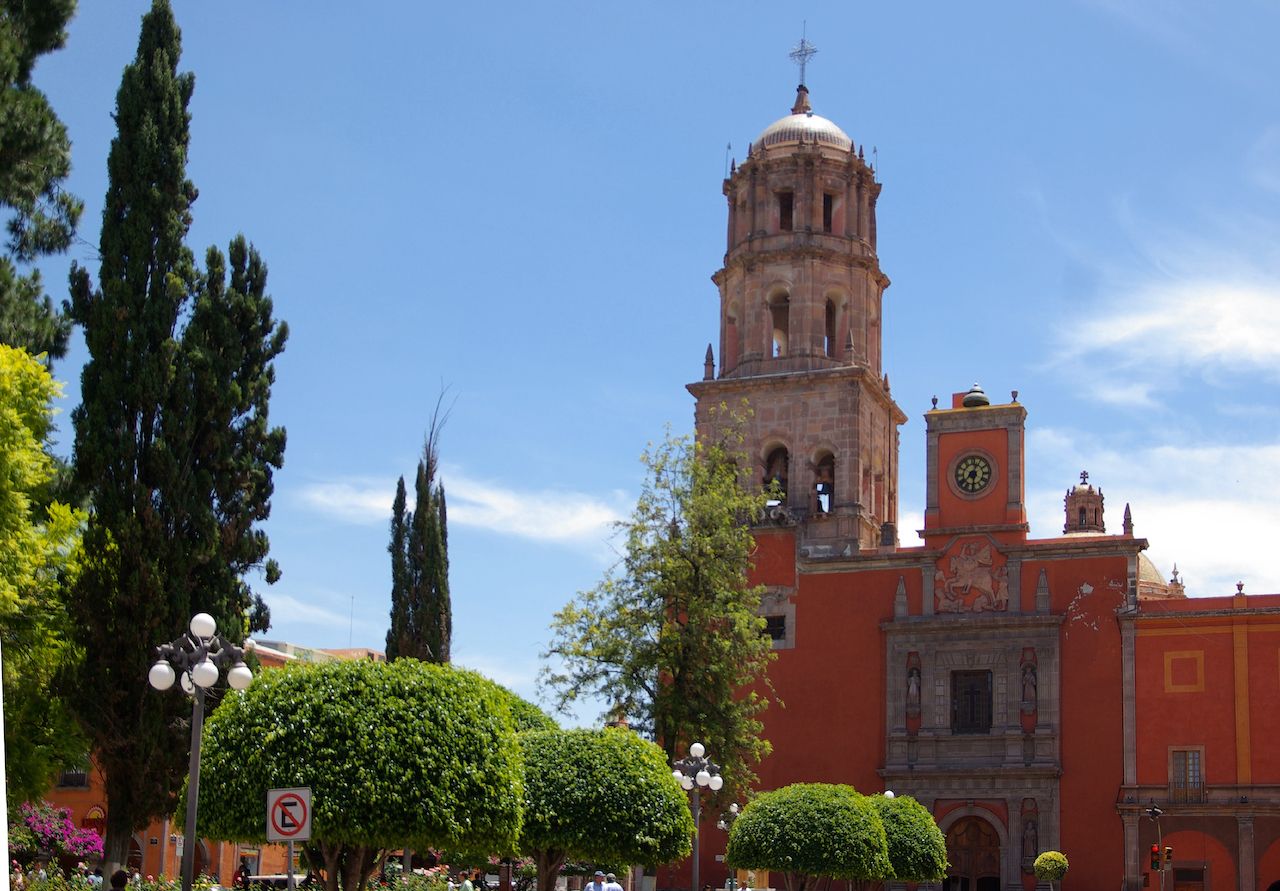 While getting your steps in walking the stone streets of Centro, head to Zenea Garden and the San Francisco Temple. This was the city’s first major temple to be constructed in the Baroque style, built in 1540, and today it houses the Regional Museum of Querétaro and its large collection of Pre-Columbian artifacts. The museum is open daily from 8:00 AM to 6:00 PM.

A few blocks away along Calle Independencia, the Santa Cruz Temple is adjacent to the Plaza de los Fundadores and located on the site where the Otomi indigenous peoples formally surrendered to the Spanish conquistadors. The temple and plaza see fewer visitors than the San Francisco temple but are of no less significance to the city’s history. In 1867, Austrian Emperor Maximilian, who ruled over Mexico for a short time under the direction of Napoleon III, was jailed in the temple after being captured by Benito Juarez’s troops, and he would be kept here while awaiting the firing squad that would end his life in July of that year, a symbolic end to colonial rule in Mexico. 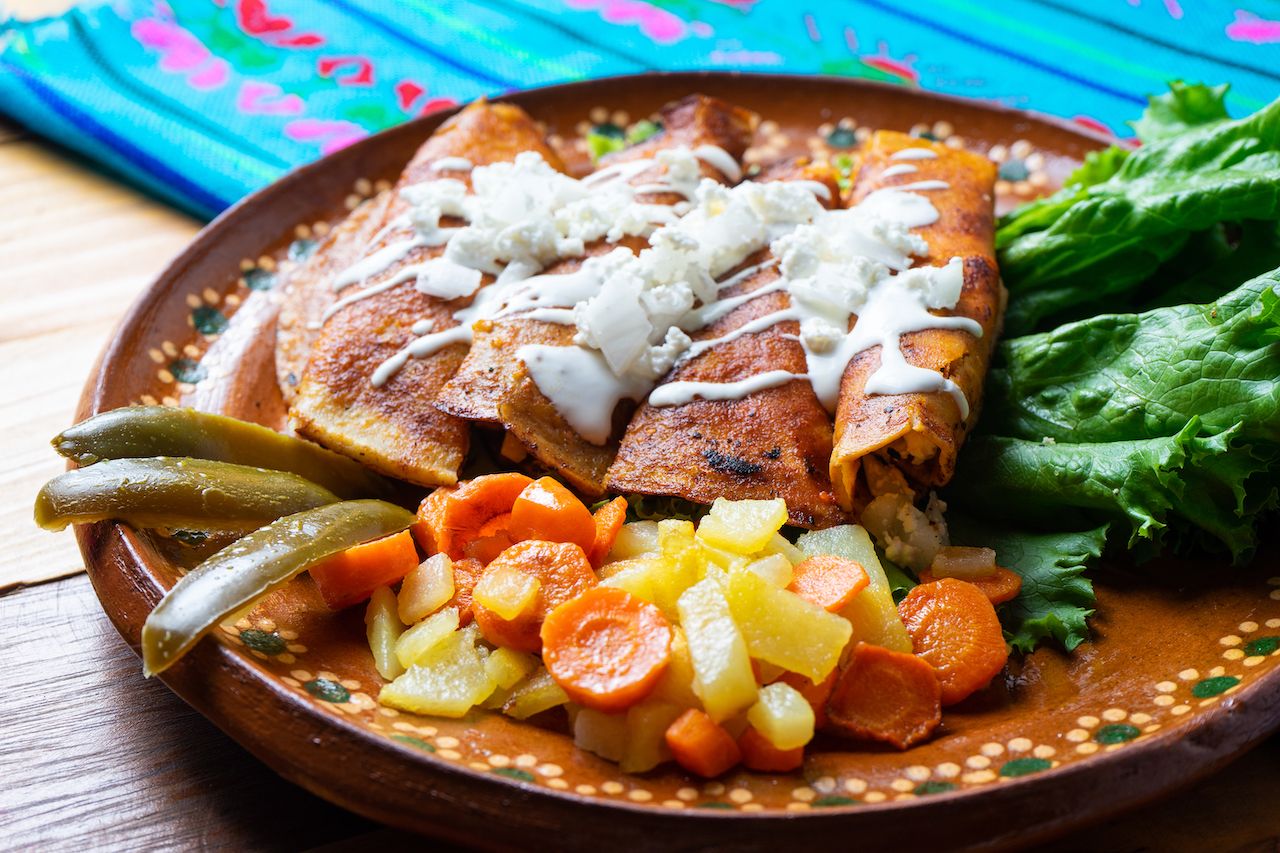 Be sure to stop at one of the many small cafes and restaurants surrounding Plaza Constitución and Jardin Guerrero. Querétaro is one of the best cities in the country for fans of traditional salsas — it would take the crown if it weren’t for Mexico City. Order a plate of carnitas, barbacoa, or tacos, and be ready for multiple types of heat. Querétaro also has its own style of enchiladas, known as enchiladas queretanas, with a sauce made of guajillo chiles, garlic, cumin, and oregano and a filling made primarily from ranchero or queso fresco. What makes them especially unique is the cooked potato and carrot topping. Many establishments also serve them filled with chicken or pork. Try them at Enchiladero on Circunvalación, a couple of blocks east of the Santa Cruz Temple.

If you have the time to get out of the city center, take an Uber up to Cerveceria Hercules, a massive brewery and food hall on the northeast end of town. Grab a beer and a table in the middle of its large courtyard. If you’re with the family or a large group of people, this is a great way to pass a couple of social hours, as there’s yard games, occasional live music, and plenty of space for kids to run around.

Check out a quirky museum. 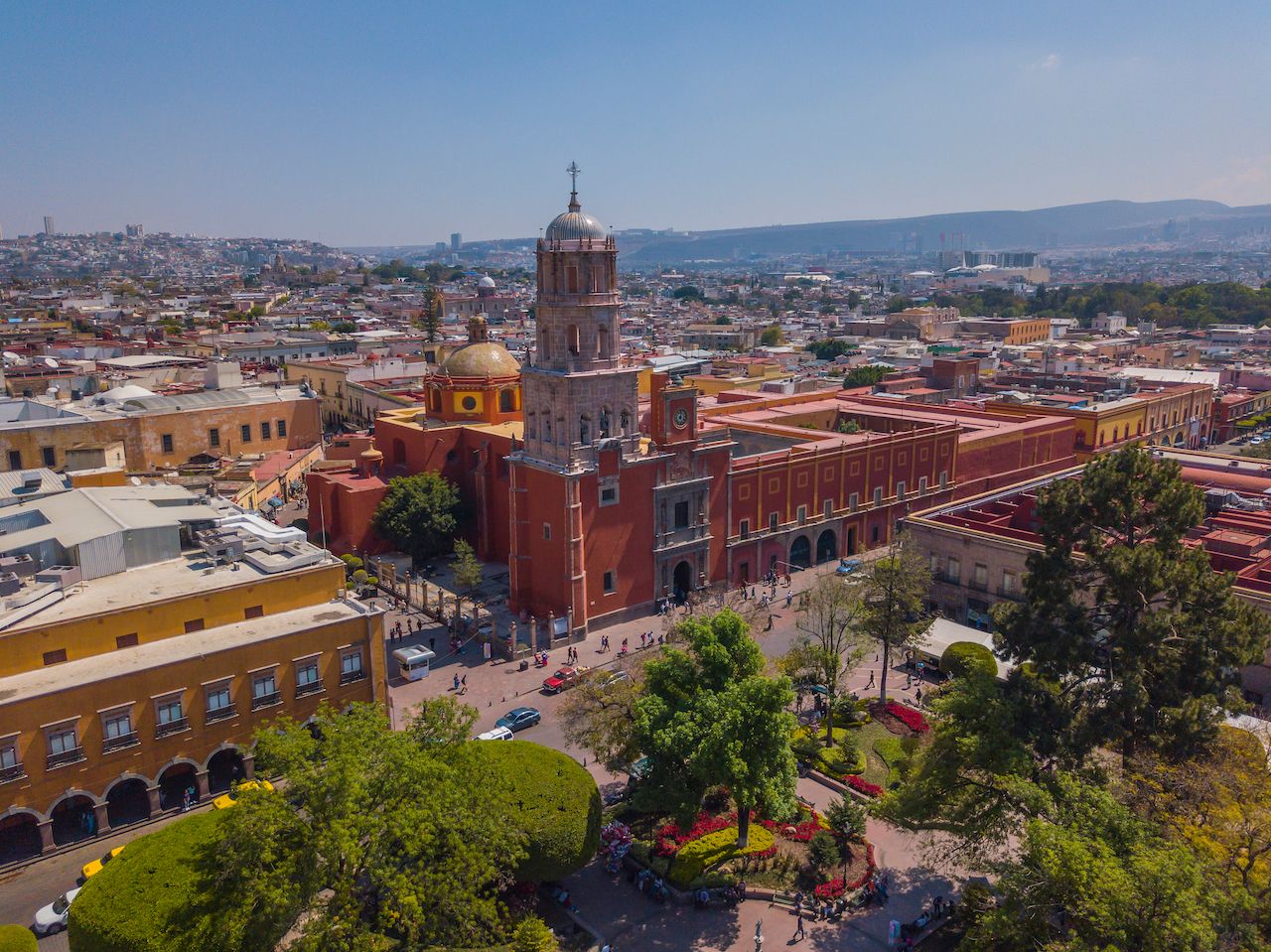 Querétaro’s museums aren’t as massive or introspective as those in Mexico City, but they’re every bit as engaging. Take the Zacatecana House Museum, which pays tribute to the design and artwork of the city and region’s early years. But local legend has it that the house in which the museum resides is haunted by the ghosts of the couple who lived there, following the husband’s mysterious disappearance and corresponding rumors that have endured ever since.

The city is also home to the world’s first museum dedicated solely to calendars, the Mucal Museum of Calendars. Like the Zacatecana House, this museum is located in a refurbished 17th-century home, but it houses thousands of calendars stretching as far back as the Aztecs. Another weird stop is the Querétaro Bugs Museum, which houses — as you likely guessed — a bunch of bugs. More than 2,000 species of bugs are displayed in cases and in frames on the walls, everything from beetles to spiders to butterflies.

Getting to Querétaro from Mexico City, and where to stay overnight 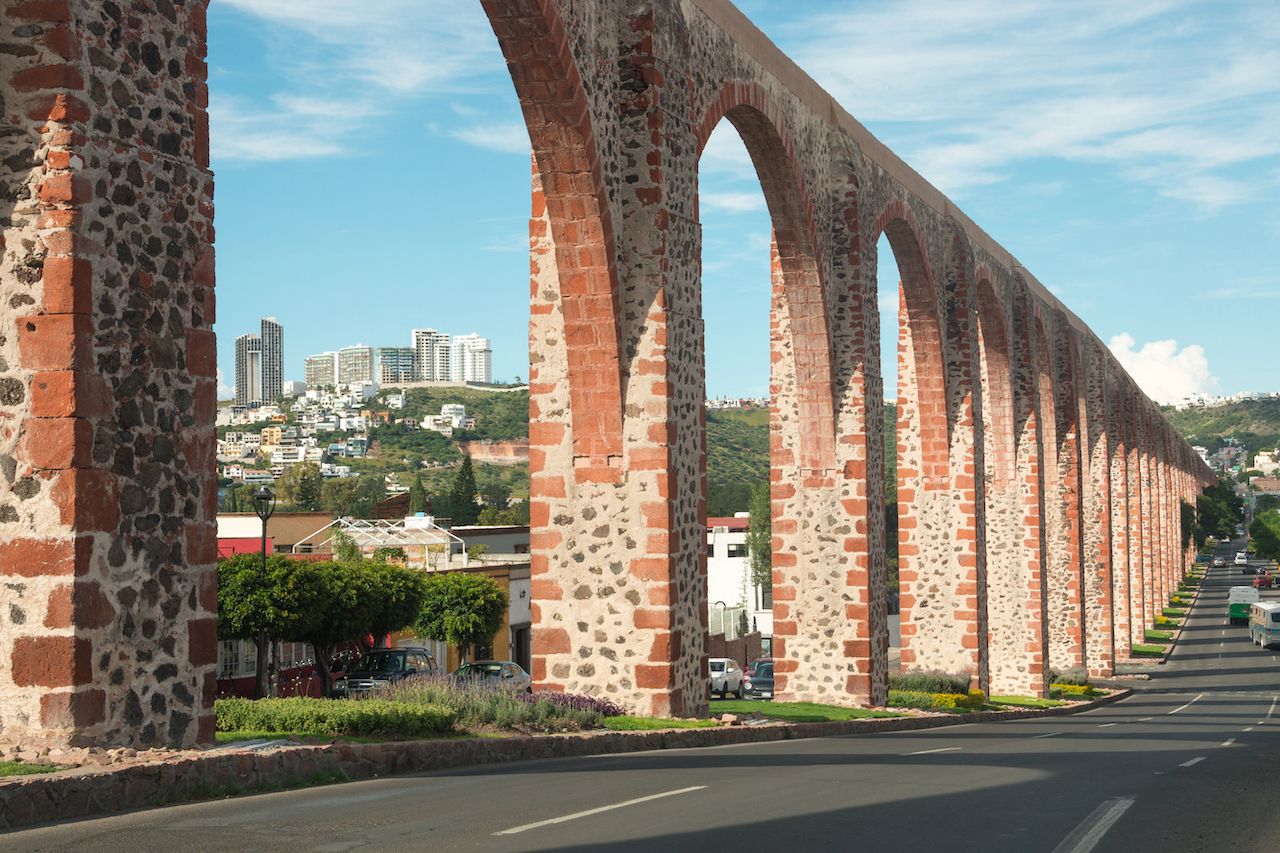 The easiest way to get to Querétaro from Mexico City is by bus. Mexico has an intricate and well-managed system of bus transport, transporting passengers on very nice coach buses for as little as a few dollars, depending on how far you’re going. Multiple bus lines service the Querétaro Bus Terminal, much in the same way that airlines service an airport. Stick with Primer Plus, which runs the 4.5-hour route multiple times per day for about $18 each way. You can buy tickets at the station or in advance via the line’s website. You can also fly between the two cities in about an hour but will have to shell out between $100 and $200.

Uber is readily available in Querétaro, though the city is by and large a safe place to be — it’s among the wealthiest of the capital cities in Mexico and a gateway for some to the tourist hotspot of San Miguel de Allende, just a 90-minute drive away. Querétaro’s city center offers many hotels, but for the most unique experience, book an Airbnb in one of the homes in the UNESCO-certified Centro or Centro Historico neighborhoods. Expect to pay $40-$50 per night for a one-bedroom apartment with a kitchen.

ArchaeologyThe Largest Pyramid in the World Isn’t in Egypt. It’s in Mexico.
Tagged
Culture Insider Guides Mexico City, Mexico
What did you think of this story?
Meh
Good
Awesome