The story of the girl responsible for queso Oaxaca (also known as quesillo in the state of Oaxaca) is common knowledge in Mexico. Her name was Leobarda Castellanos García and she lived in Reyes Etla, Oaxaca, back in the late 1800s. The story says that one day Leobarda was left in charge of cheese production in her house. The cheese was in the middle of curdling — the process by which the cheese coagulates and acquires a solid consistency — when the girl got distracted and the mixture went far beyond its sweet spot.

Cheese treated this way loses moisture and crumbles when it is cut. Leobarda knew this and she knew that her carelessness would result in bad cheese and a good scolding from her parents. Fortunately for the country’s culinary future, Leobarda decided to improvise and added hot water to the mix in order to make amends for her mistake. The result was a sticky paste that formed long strings and had a surprisingly good flavor. Her family made the best out of the accident and decided to start working on perfecting the new recipe. Since it looked like cheese, but it was definitely something else, they decided to give it the name quesillo.

The story of Leobarda has become inherently attached to the folklore of Reyes Etla. However, there is no record that supports the existence of the girl or her lucky accident. The legend remains as an introduction to one of the most famous cheeses in Mexico and a reminder that sometimes the best things in life come from a fluke. 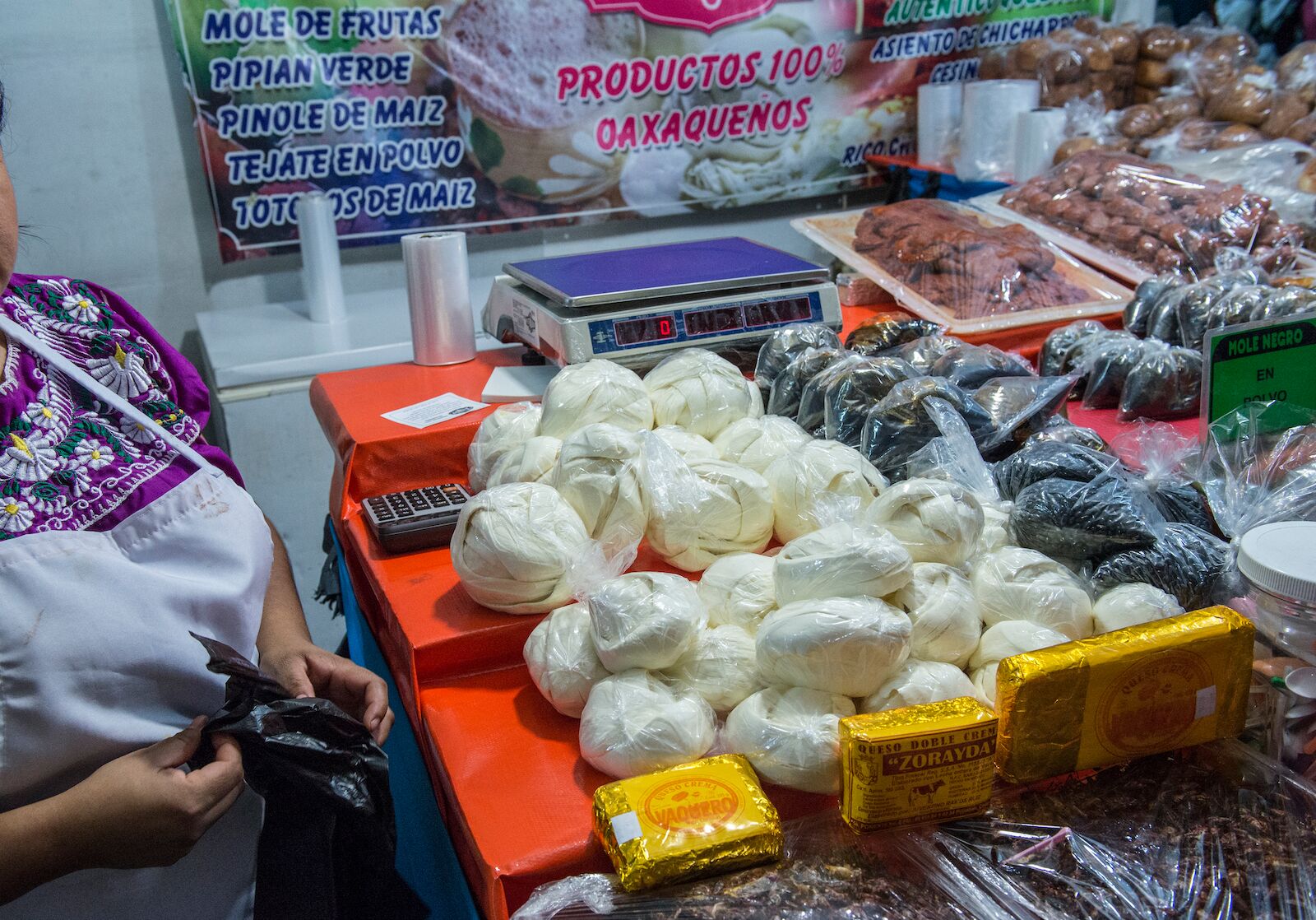 The story of Leobarda Castellanos has some details that are grounded in reality. It’s no secret that Oaxaca cheese is made in a very similar way to the one narrated by the story. Real handcrafted quesillo is made with a curdled mixture of fresh milk and sour milk. Once the curd solidifies, it’s cut into cubes, which are then melted by pouring scalding hot water over them. Once melted, the cubes are stretched until the characteristic threads of the cheese are obtained. Water is then added to stop the melting process and the threads are rolled up to form the characteristic cheese balls that are a common sight in every market around Mexico.

The craftsmanship and tradition behind the production of Oaxaca cheese are elements that the community of Reyes Etla has used for years to try to obtain an appellation of origin for their best-known produce. This has not yet been achieved and the Oaxaca cheese that is consumed in Mexico rarely comes from the state that gives it its name and is rarely produced without industrialized processes.

A tradition in the brink of extinction

In Reyes Etla, quesillo is made by hand and its production constitutes the main source of income for many local families. Producers who are still attached to the traditional ways use milk from cows in the same locality, make the curd at improvised home workshops, and stretch and entangle the cheese by hand. All of this tradition and knowledge is at risk due to the high availability of industrialized versions of quesillo that are faster and cheaper to produce. However, as any inhabitant of Etla can assure you, the taste of this industrial cheese is completely different from the original.

Another problem that the community of Reyes Etla faces nowadays is the lack of support from agricultural and livestock associations in the state of Oaxaca. Producing cheese in this state has become very expensive and local producers are unable to compete with the big brands found in Mexican supermarkets. The consumption of handcrafted quesillo has become a custom that just some connoisseurs and tourists to Reyes Etla can boast about.

During the Guelaguetza (the most important cultural festival in the state of Oaxaca), Reyes Etla celebrates the Feria del Quesillo, an event that seeks to promote the consumption of local products and inform the public about the artisanal processes involved in making Oaxaca Cheese. The event usually takes place during the second half of July.

As you may have already noticed, these two terms are pretty much interchangeable. Locals say that this cheese got its better known moniker (Queso Oaxaca) in the state of Puebla, to designate it as a product from the neighboring state. Although there is no strict rule on which name to use, we can safely say that this cheese is better known as Oaxaca everywhere in Mexico but in the state where it comes from. 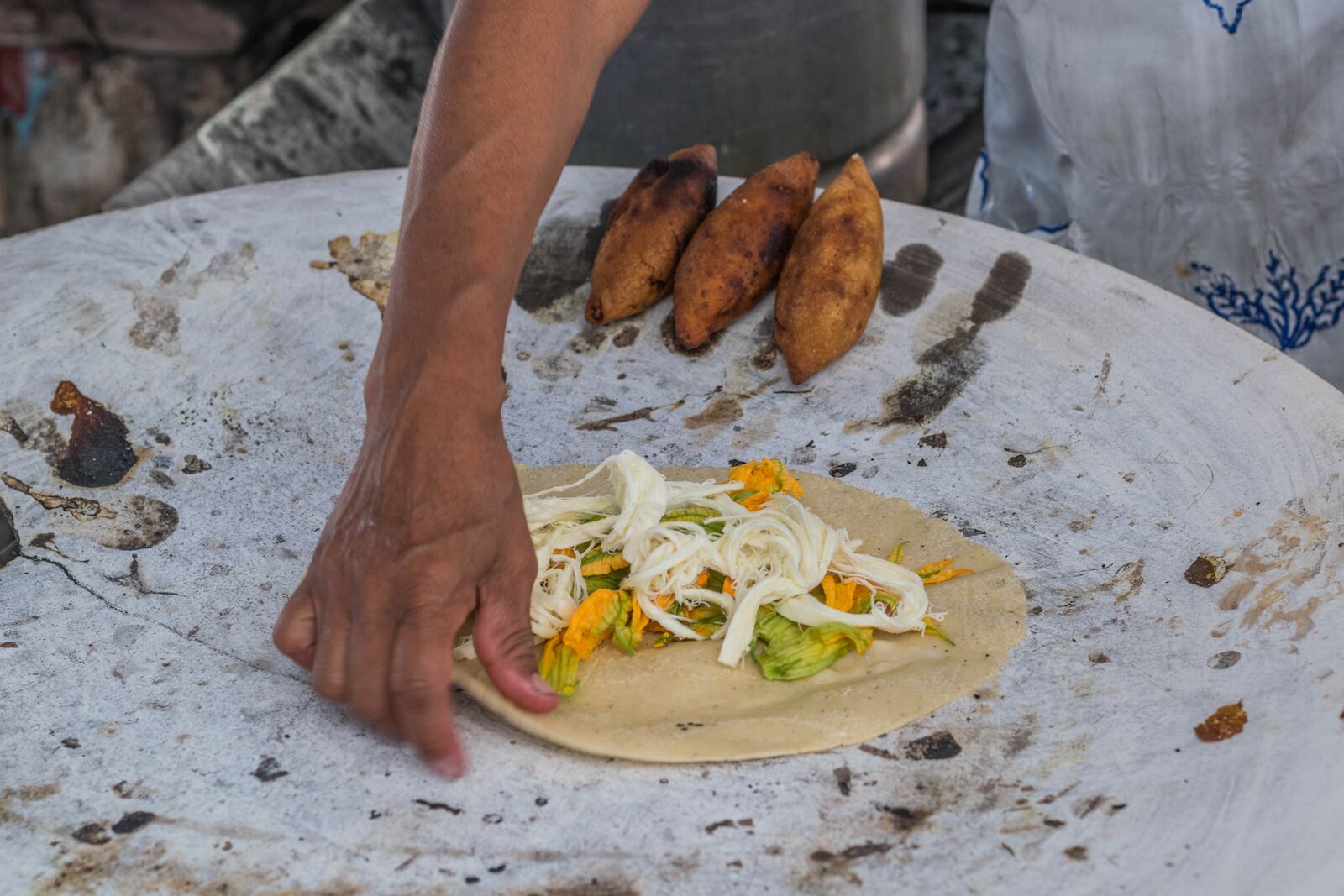 Oaxaca Cheese is a core part of Mexican gastronomy, like many of the iconic pre-Hispanic foods from Oaxaca. It is one of those things you’ll find in the fridge of most Mexican households, in traditional markets, and basically in every single grocery shop (of course this will be the industrialized version that the inhabitants of Reyes Etla love to hate).

Oaxaca Cheese is the perfect companion for many appetizers, being an essential part of quesadillas, tortas, cemitas, molletes, and tlayudas. It is also common in stews and in chiles rellenos — an emblematic Mexico City dish consisting of a big Poblano Chile stuffed with cheese and bathed with hot tomato sauce. Quesillo can also accompany gratin dishes such as enchiladas, chilaquiles, or be protegonic like in the famous quesos fundidos —a taqueria delicacy consisting of melted cheese and your choice of meat or veggies. And of course, you can also shred it into strips and put it directly on top of a hot bowl of tortilla soup.

Food + DrinkOaxacan Cuisine Is Unlike Food From Anywhere Else. These Are the 5 Dishes You Have To Try.
Tagged
Food + Drink Mexico
What did you think of this story?
Meh
Good
Awesome

Meet the Skybike, a Bike Zipline High Above a Roaring Waterfall in Mexico

This Seashell-Shaped Airbnb on Isla Mujeres, Mexico, Is Pure Magic